This isn’t Halifax-style donair, so don’t expect any sweet sauce. Instead, it’s based on a more Middle Eastern style of doner commonly found in Berlin. 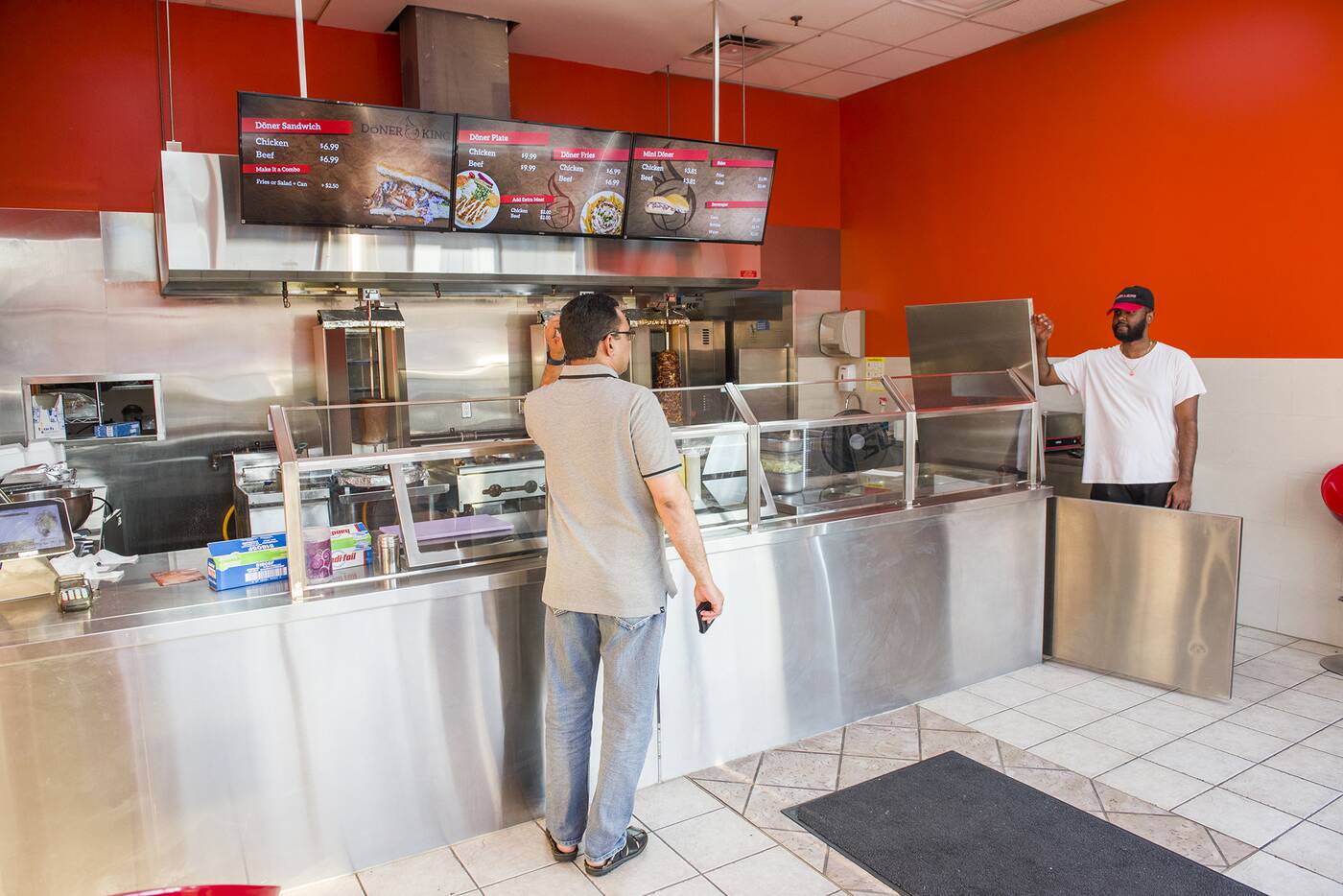 It’s a takeout spot so there’s not much decor or seating to speak of, just a few somewhat broken chairs and an L-shaped metal ledge. 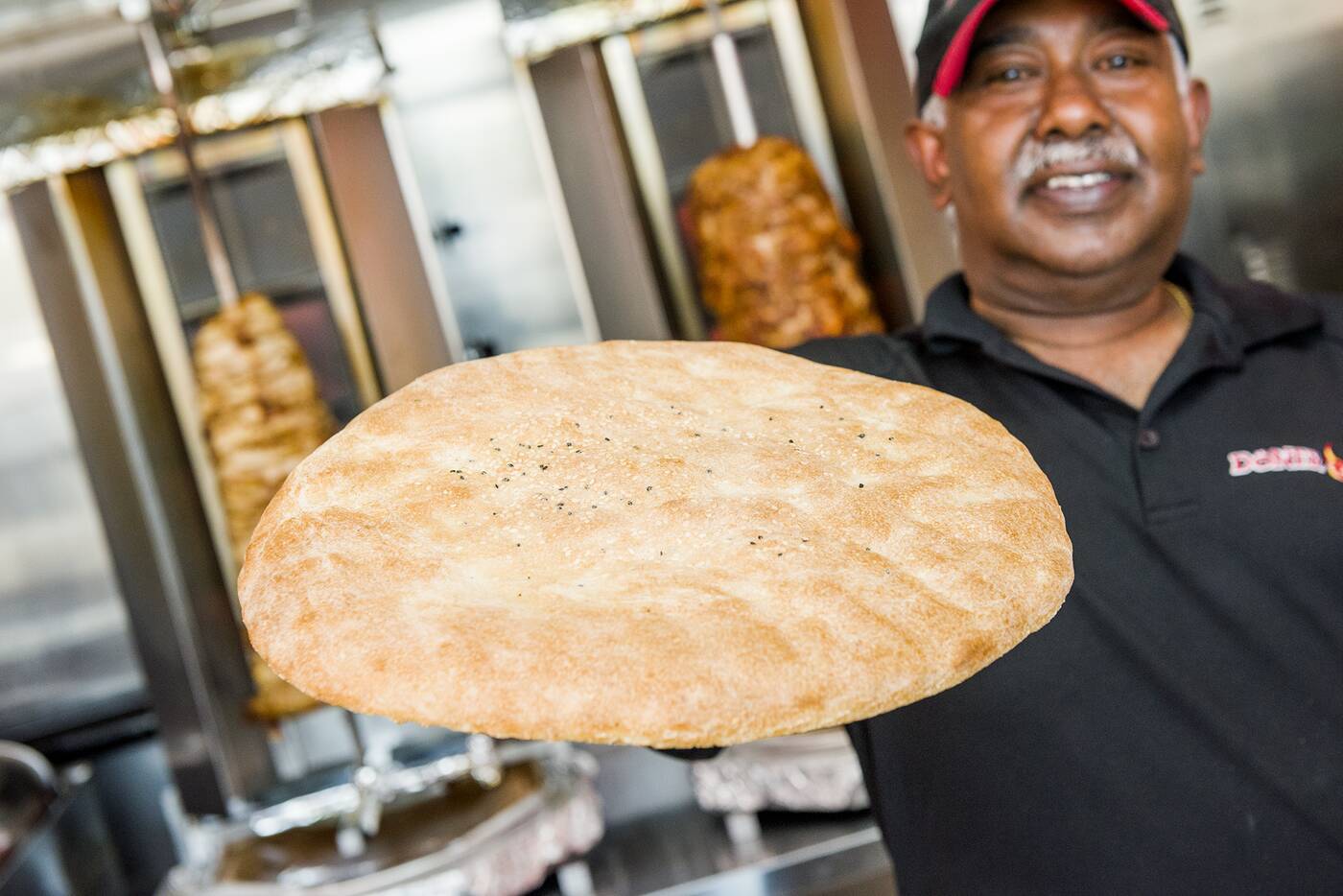 A bakery specially makes the Turkish flatbread custom for Doner King. These are big sandwiches, so big loaves of bread are required. 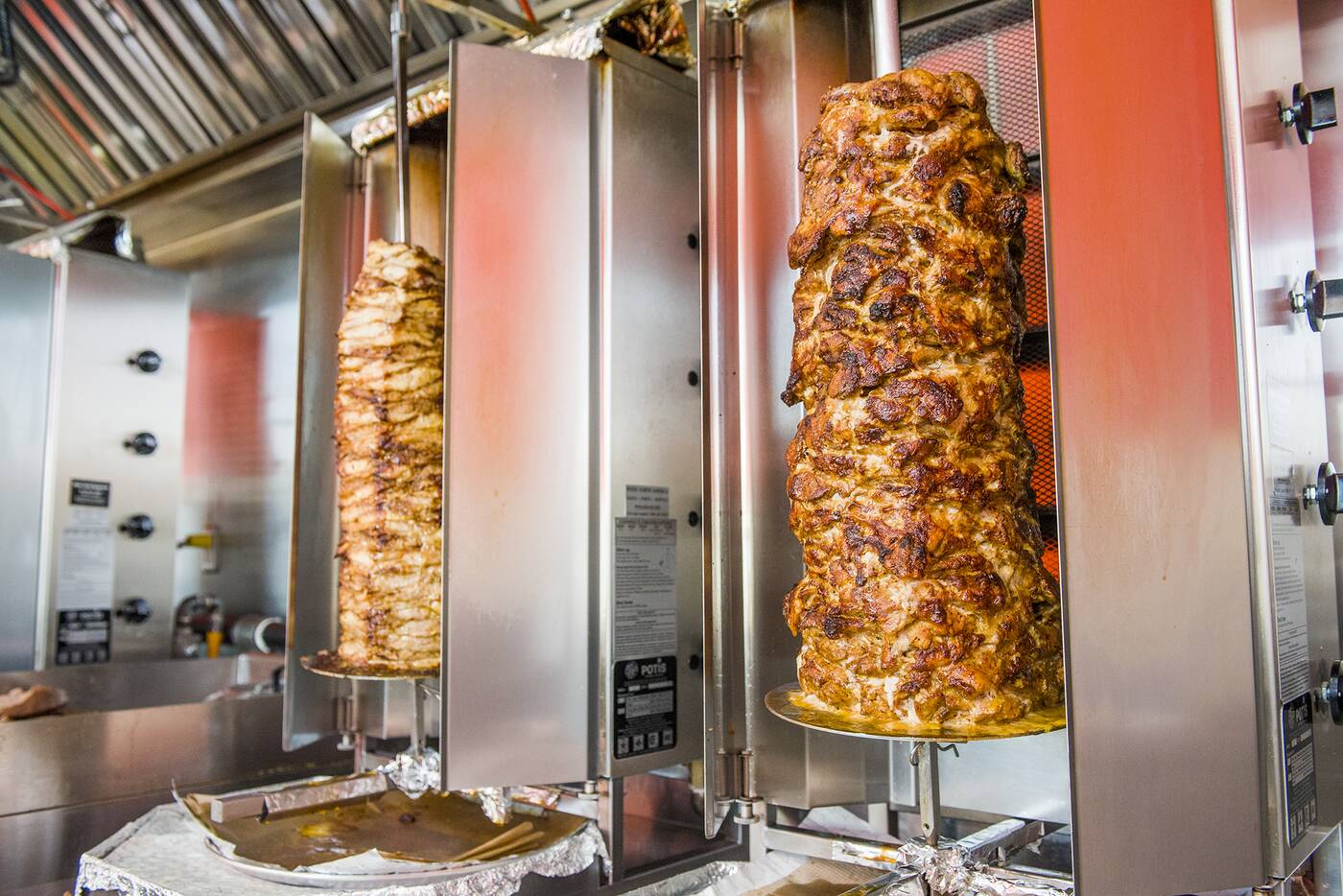 Chicken is prepared from scratch here, help with the towering skewers is provided by the man behind the equally epic rotating meat cones at Shawarma Empire. 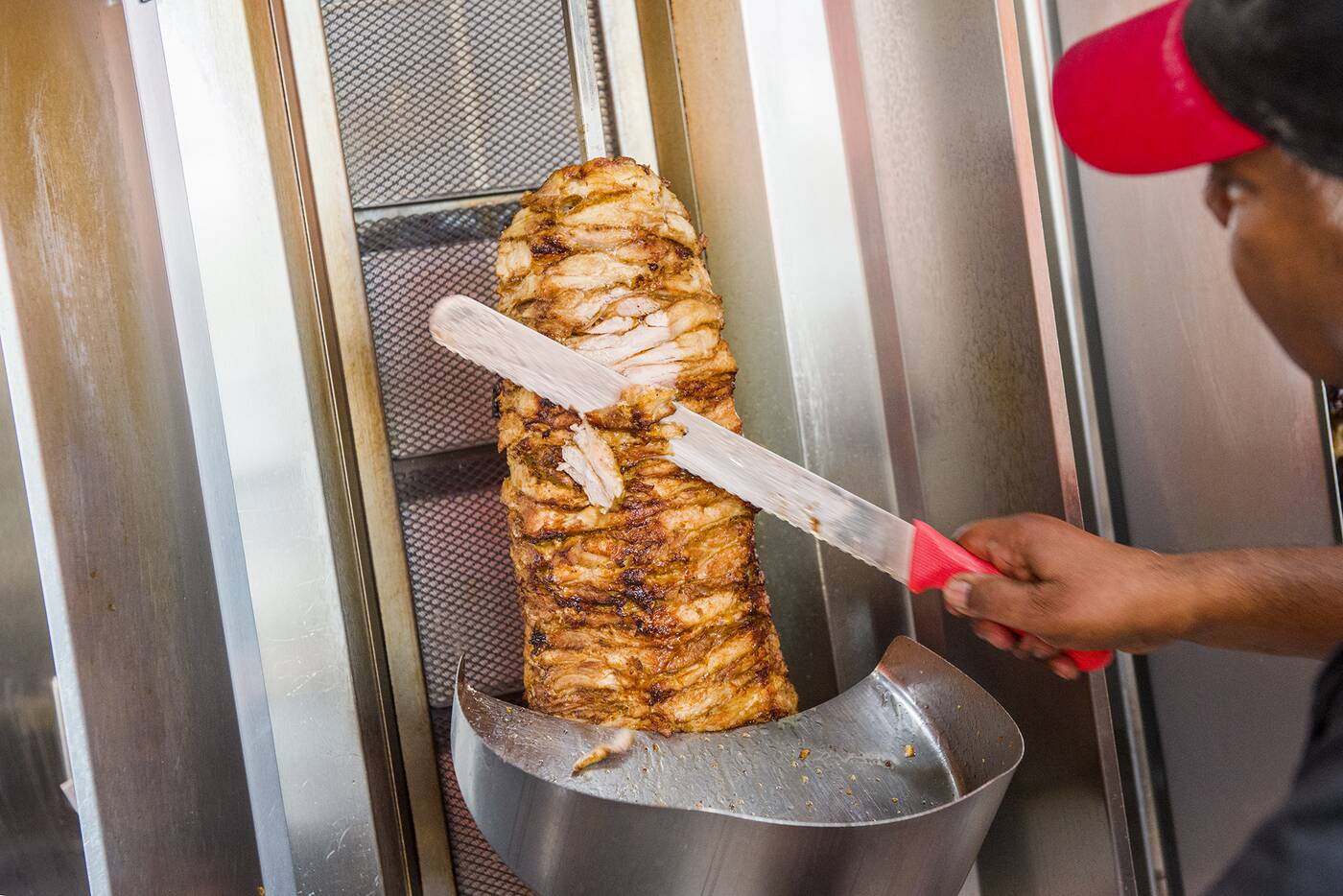 The meat is given a dry marinade of a mix of spices, massaged with lemon juice on the skewer, then left for a day before cooking begins. 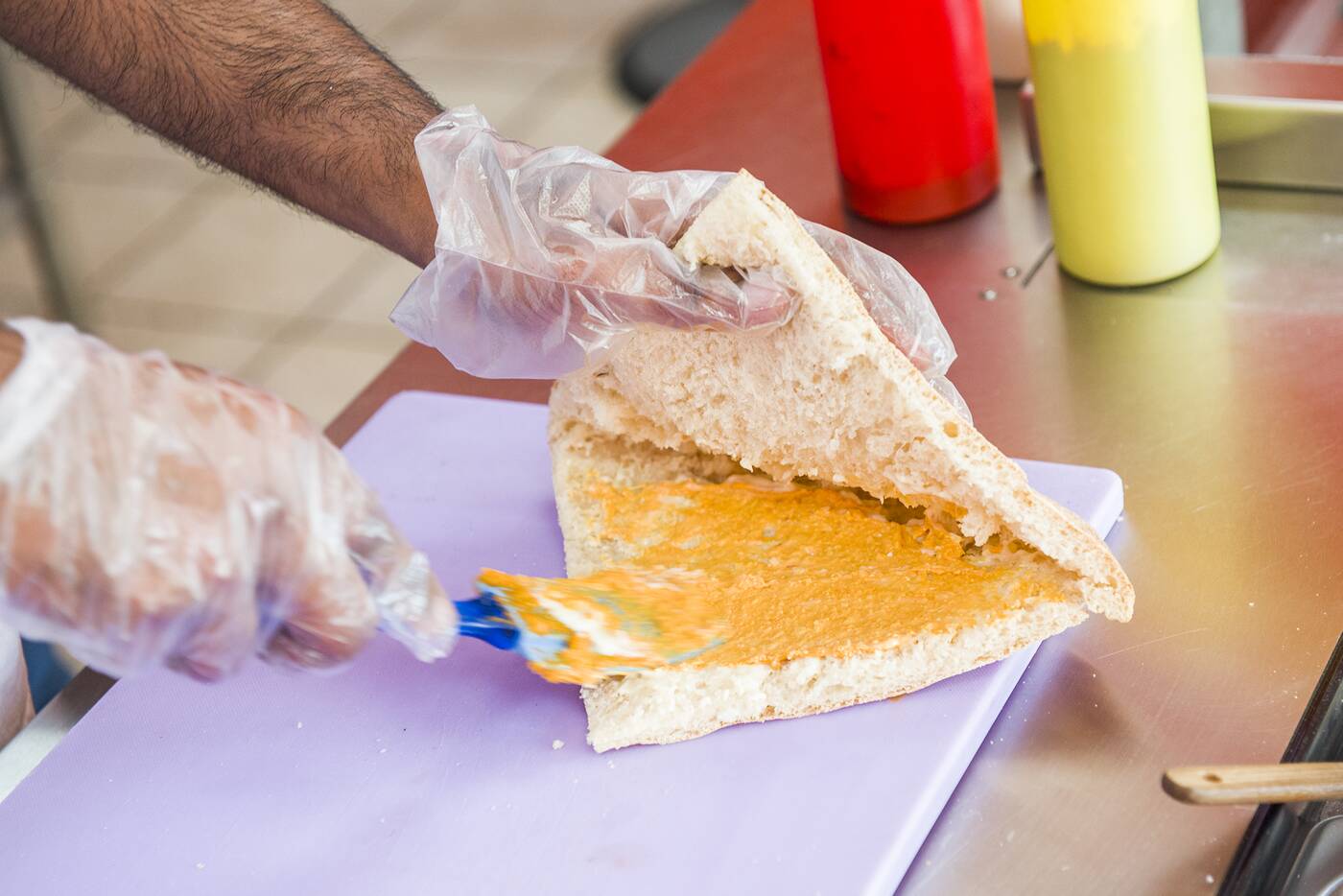 A chicken doner sandwich ($6.99) is stuffed with this chicken after it’s been shaved off the skewer and left to rest on the grill for a little bit so it stays warm and juicy, which is apparently better than just shaving it straight into the sandwich. 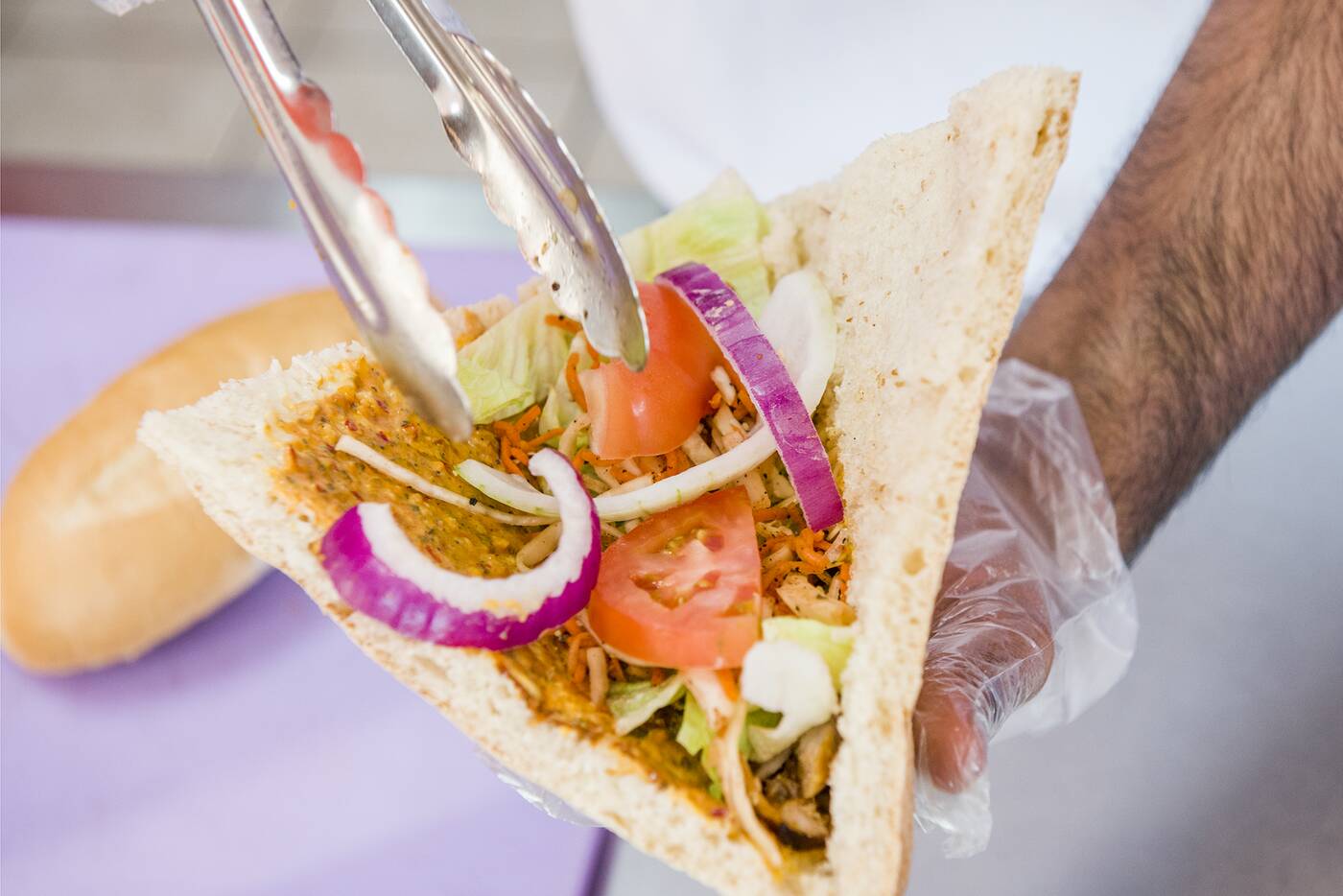 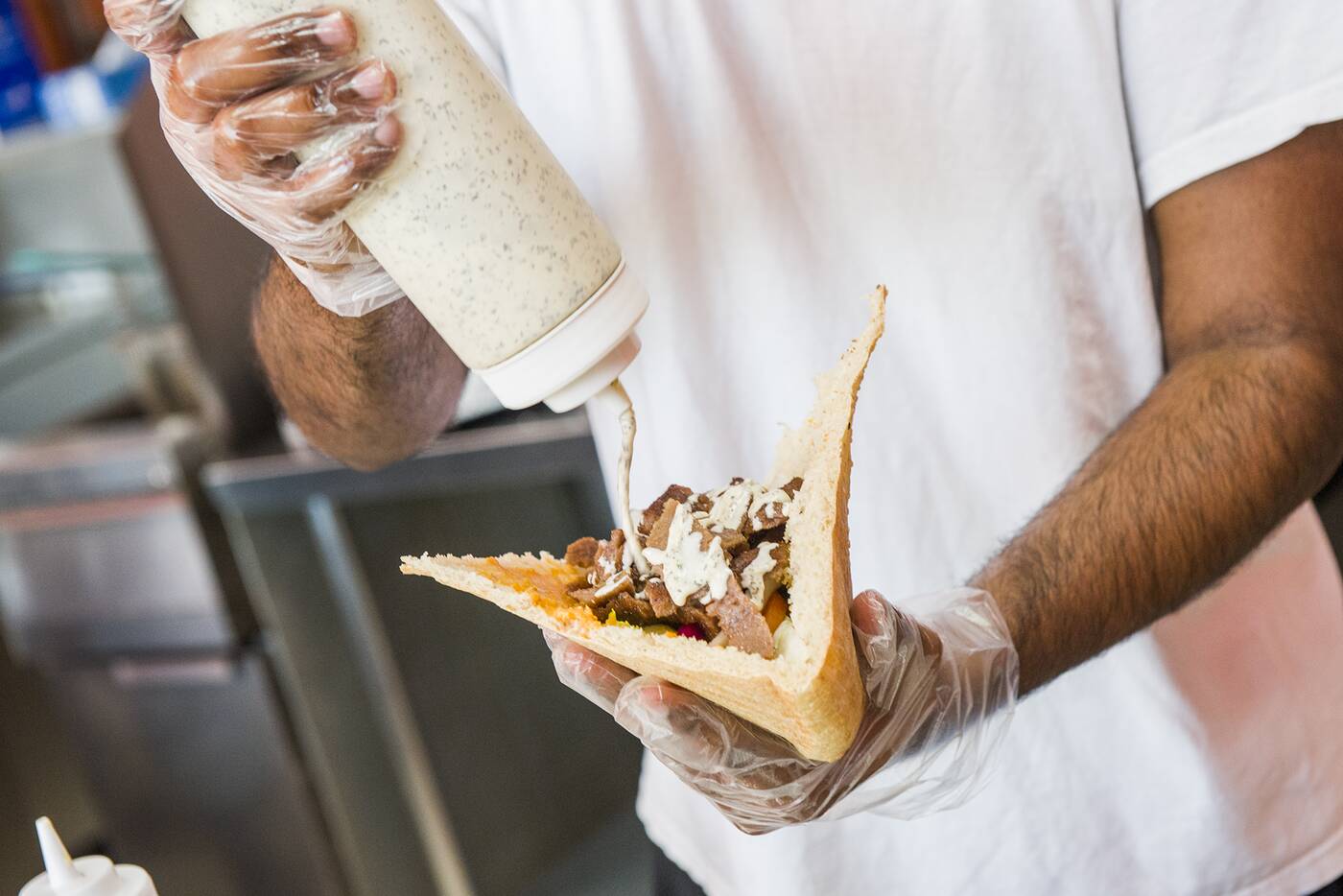 The sandwich is pressed right at the end to stuff all that goodness in there, making the drippy handful warm, hearty, crunchy and zesty. The chicken is moist but slightly charred and smoky, caramelized to a dark golden brown. 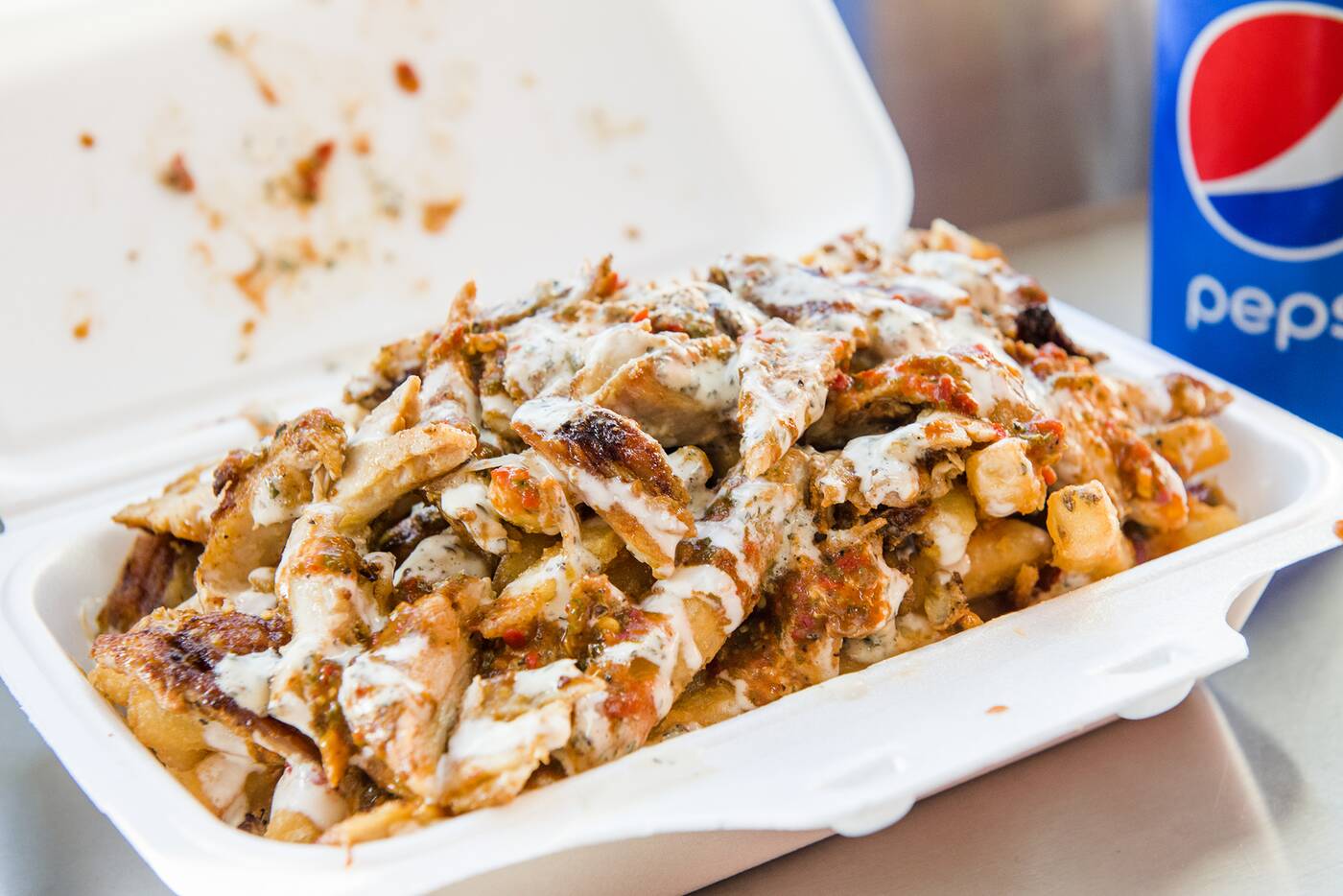 Doner chicken fries are $6.99 too and also constructed in layers: fries, tahini, ranch and hot sauce, then chicken, then the same three sauces again. This means the flavourful sauces penetrate throughout the fries, which are mostly a vehicle for sauce and chicken. 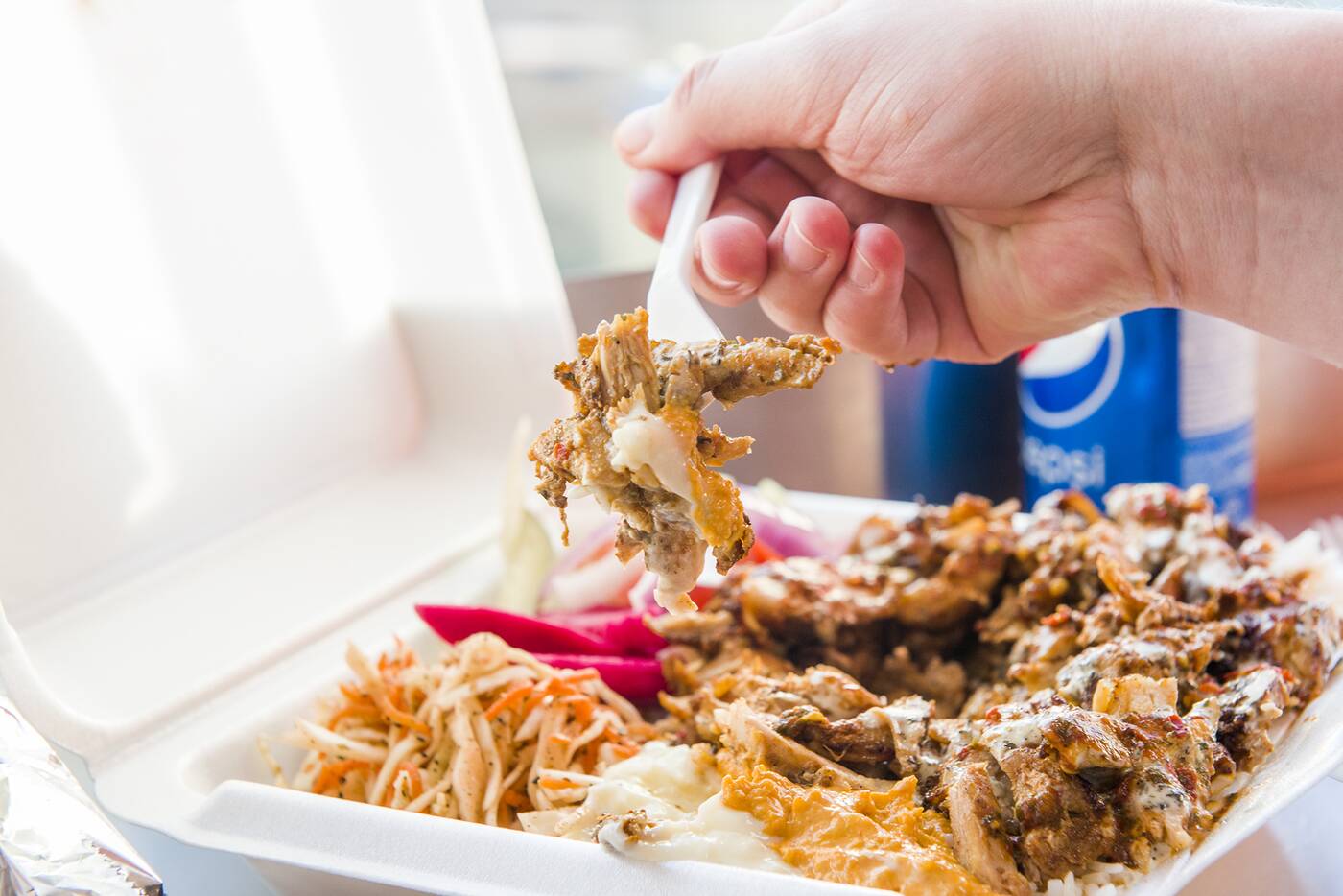 A doner chicken plate is $9.99, but it’s a massive serving for the price — with the same choices for veggies on the side, a crisp little shredded salad and potent sauces smeared on the edge, all on a heap of steamy rice.

There’s also beef gyro protein option for everything, but it’s not made with love in house in the same way. On weekends this place also does kothu roti, the curry made with a stock that uses the bones from butchered chicken. 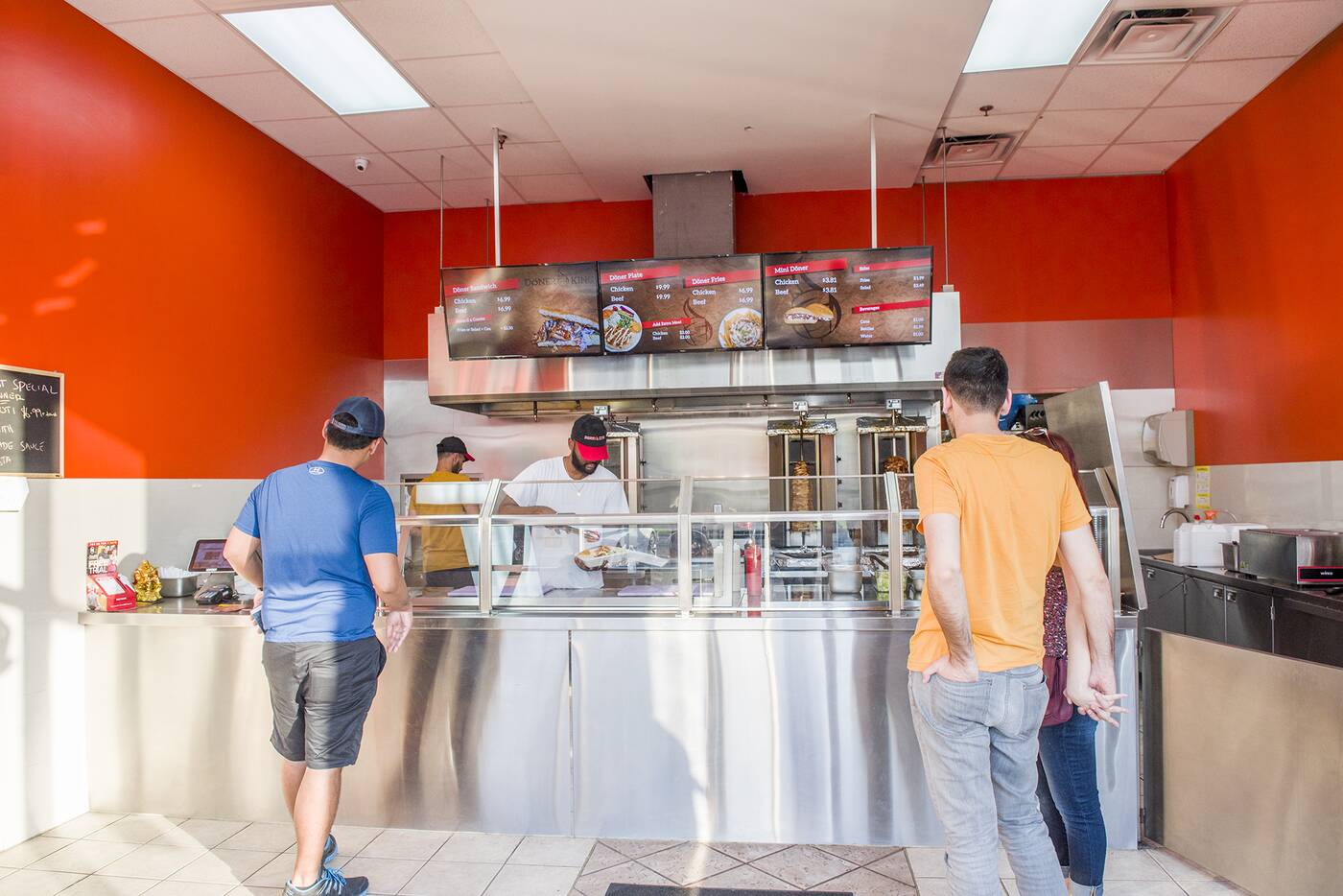 Son in this family-run business, Janusan Jayanthan, lived in Berlin and has managed to faithfully recreate one of his favourite foods from there at Doner King. 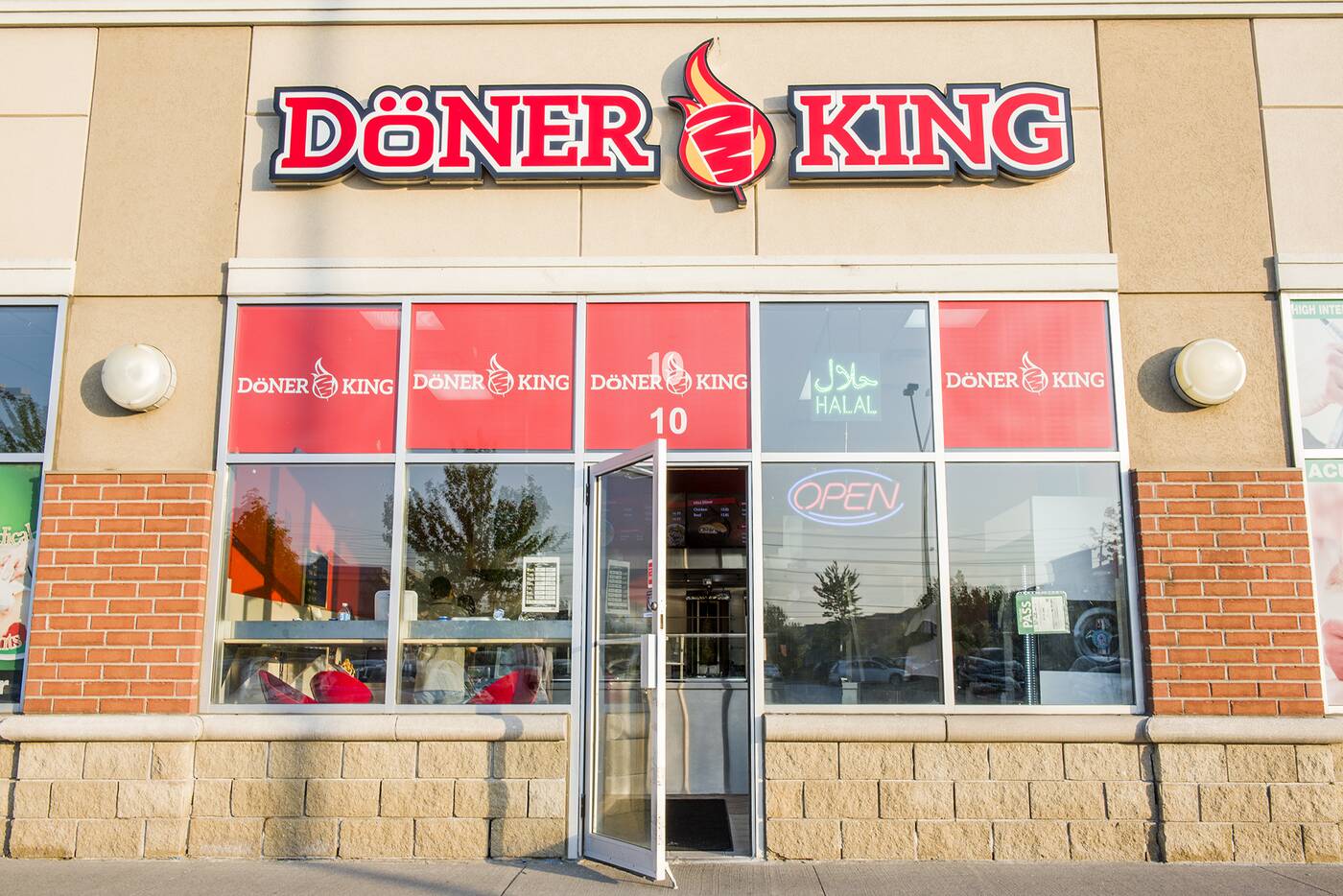