Don Alfonso 1890 is the Toronto outpost of a Michelin-starred restaurant, that's now serving gourmet Italian food from its newest location on the 38th floor of the Westin Harbour Castle.

The sprawling 90-seat space is a design haven. The most defining feature for me is the 360-degree view of the Toronto cityscape on one side, and Lake Ontario on the other. 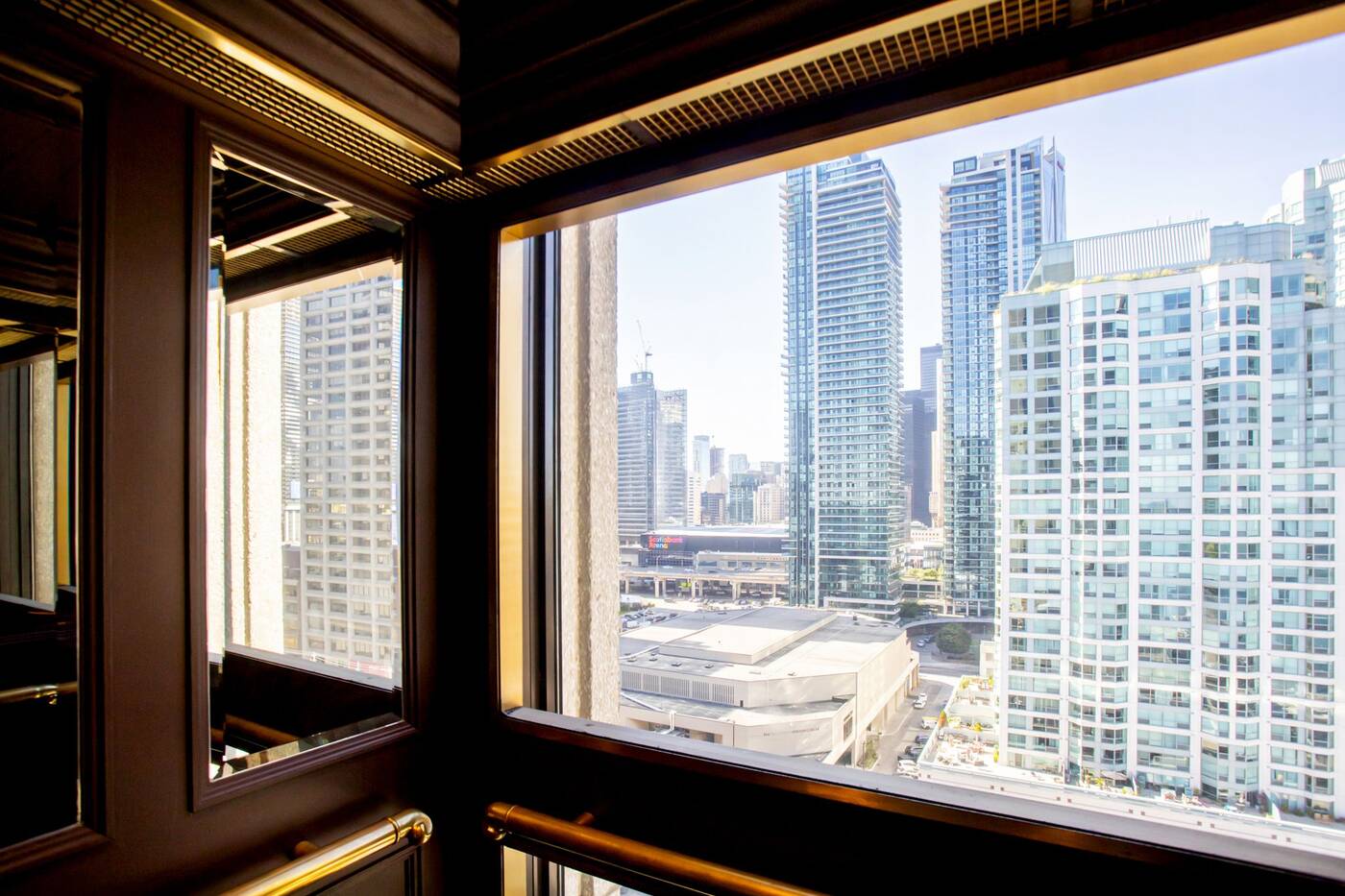 The views are the first thing you're introduced to before you even step into the restaurant. There's a dedicated scenic elevator inside the Westin that gives you a glimpse as you ride up to the top floor.

Don Alfonso is a celebrated international restaurant that showcases the flavours of the Amalfi Coast. The original two Michelin-starred location in Campania was founded in 1983 by legendary chef Alfonso Iaccarino and his wife Livia. Their son, Ernesto, took over as chef in 2003.

Since then, the restaurant has opened up around the world with dining rooms in Italy, New Zealand, and China. 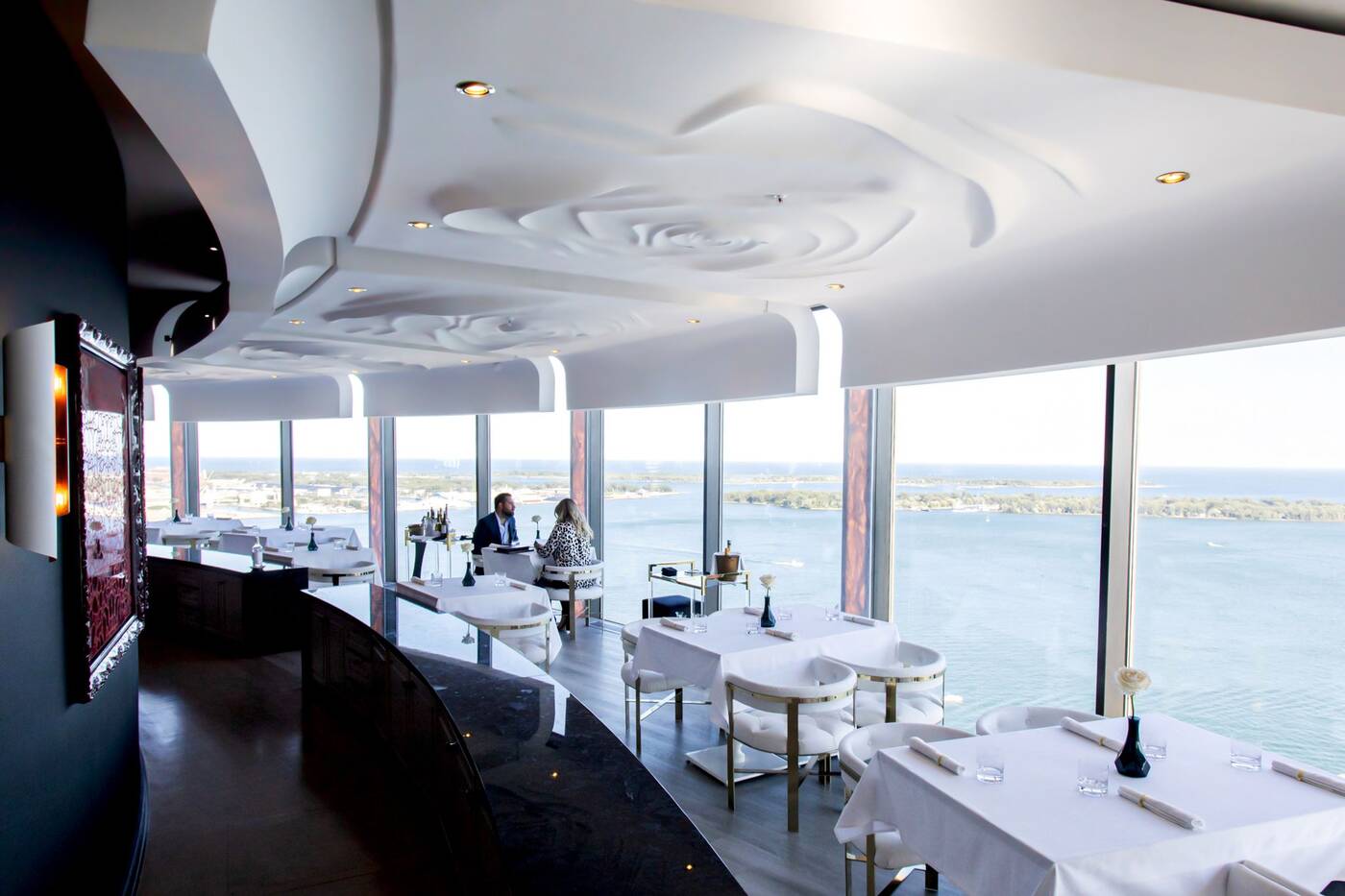 The brand was brought to Toronto in partnership with the Liberty Entertainment Group. Starting out on Toronto Street in the former Rosewater Supper Club space, it reopened as a pop-up inside Casa Loma last summer. 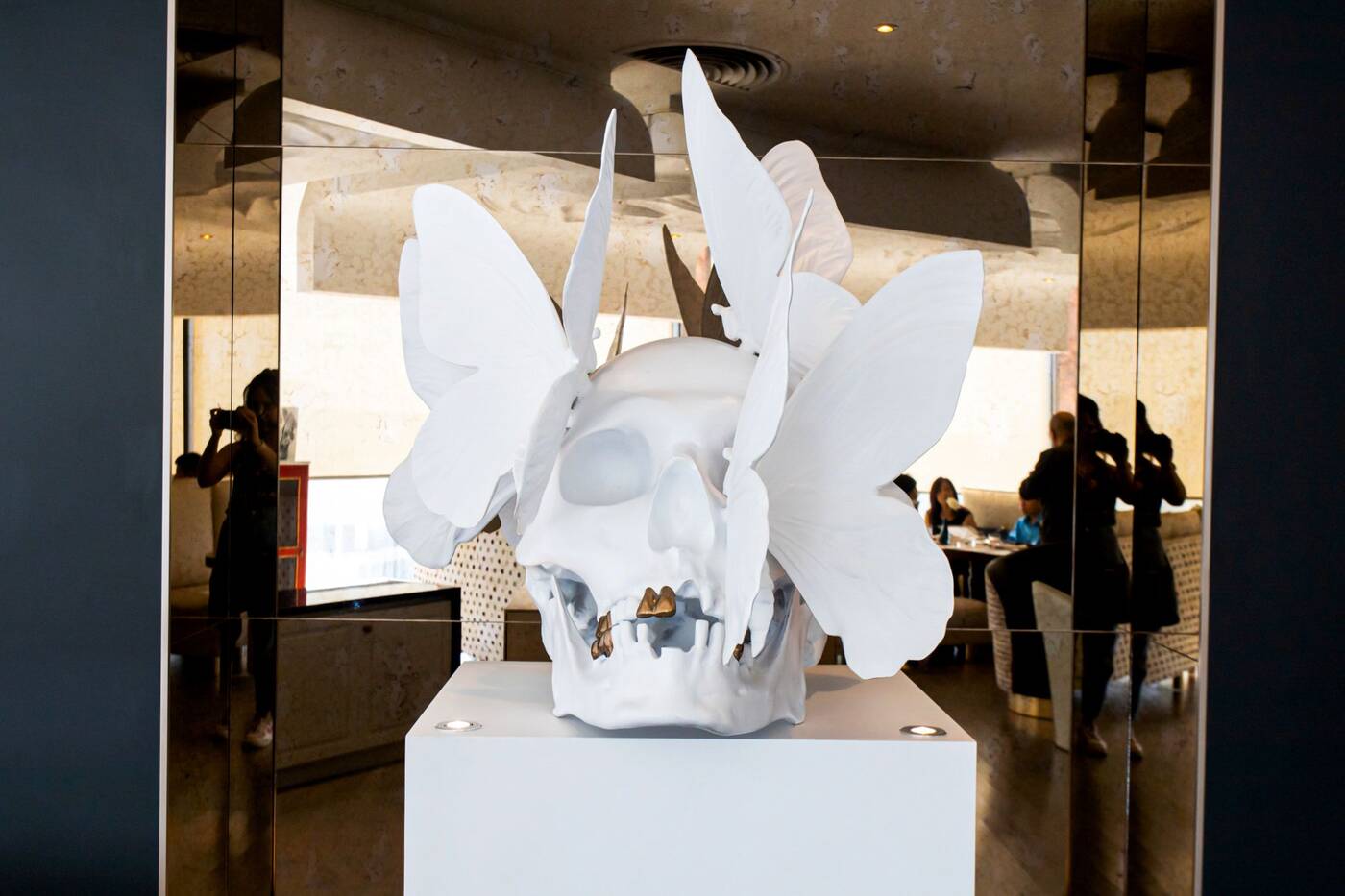 It's now moved into a picturesque new home at the Westin, with Nadia Di Donato, Liberty Entertainment Group's Creative Director, continuing as the head of design for the project. 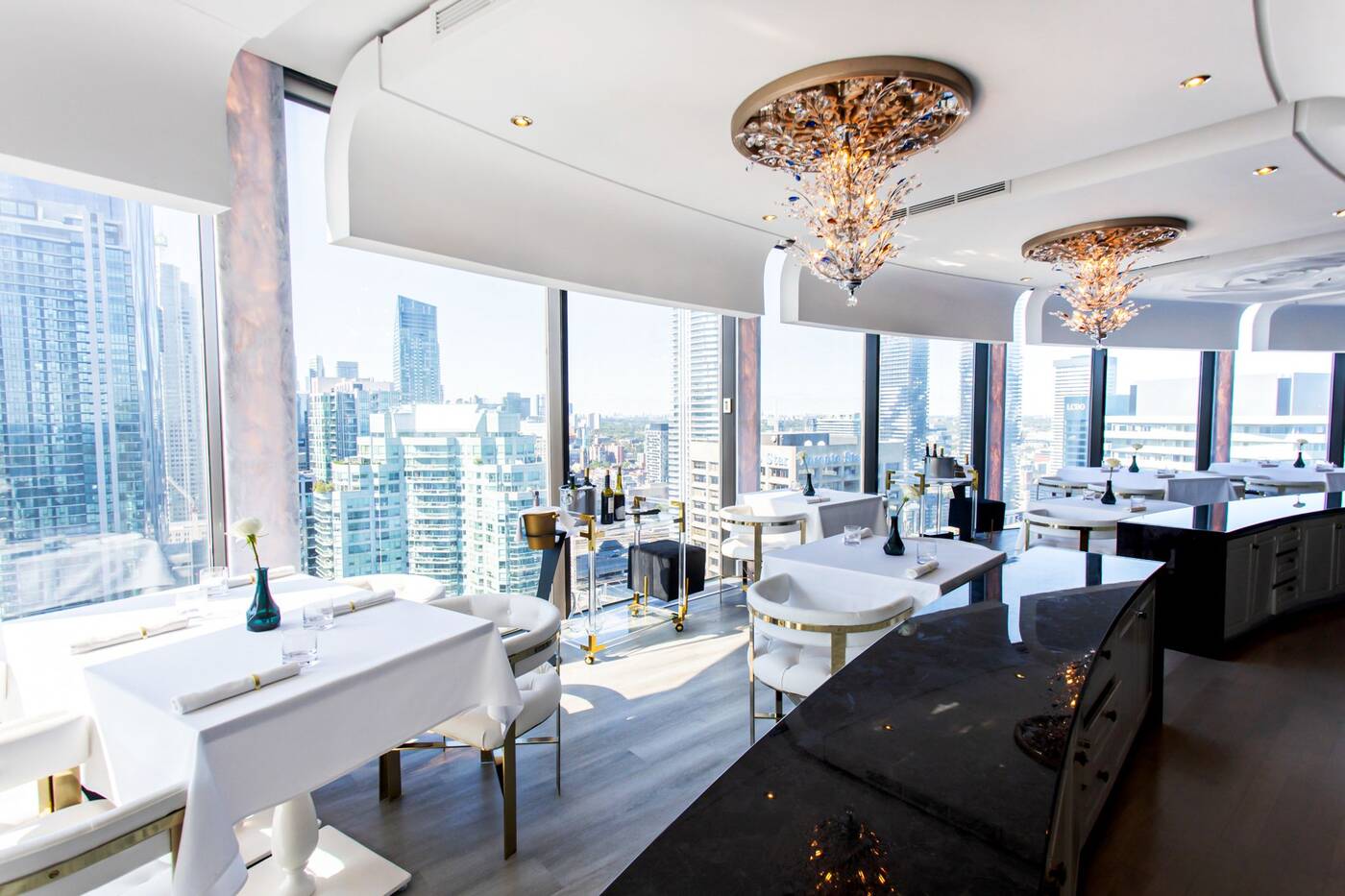 The atmosphere inside is light and airy. The first element to catch my eye is the room's floor-to-ceiling windows surrounding the open space. 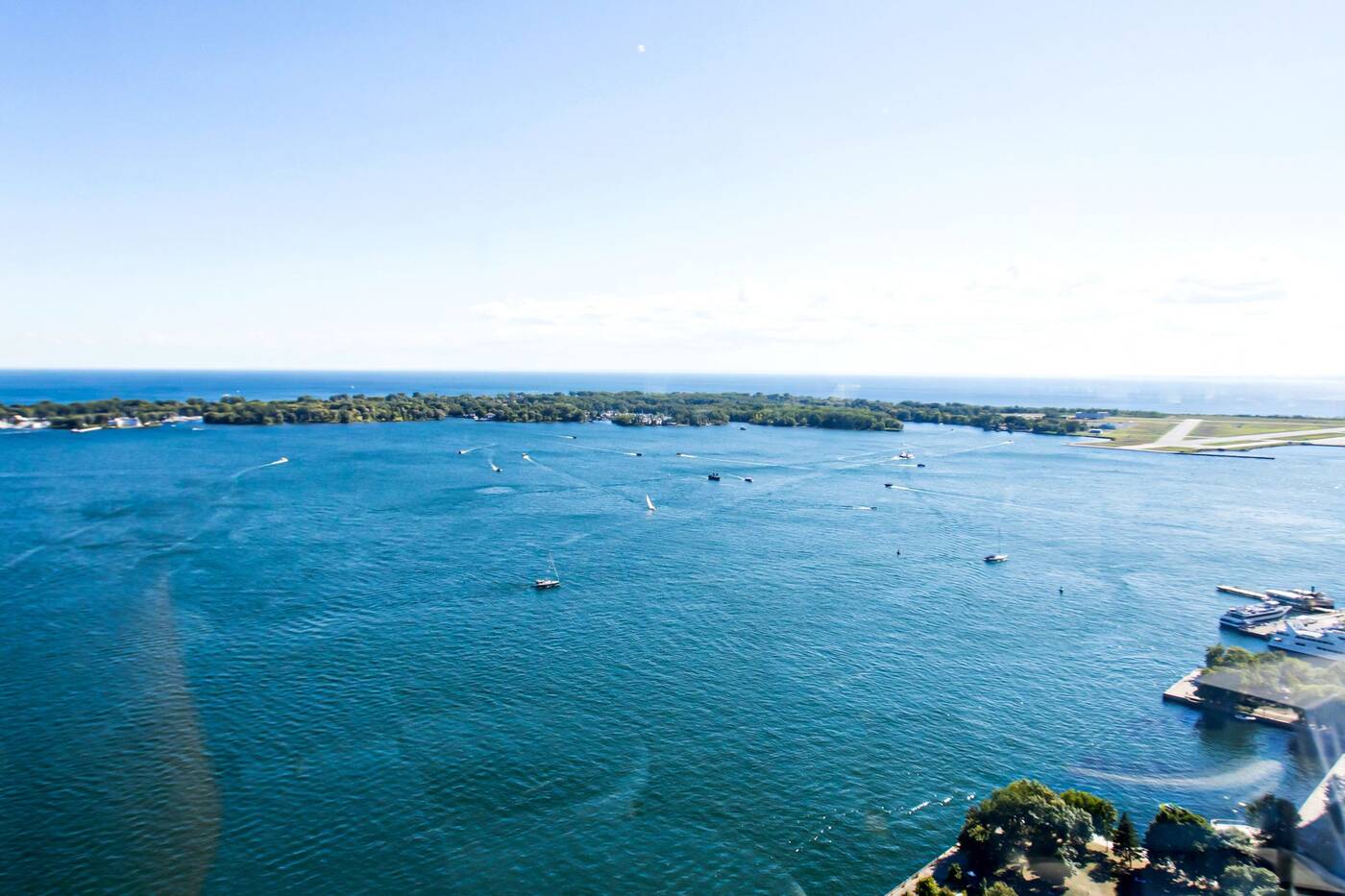 Diners can choose from two views. The side facing the city glows brighter into the evening, while the windows facing Toronto Harbour make it feel like you're sitting lakeside while you're dining. 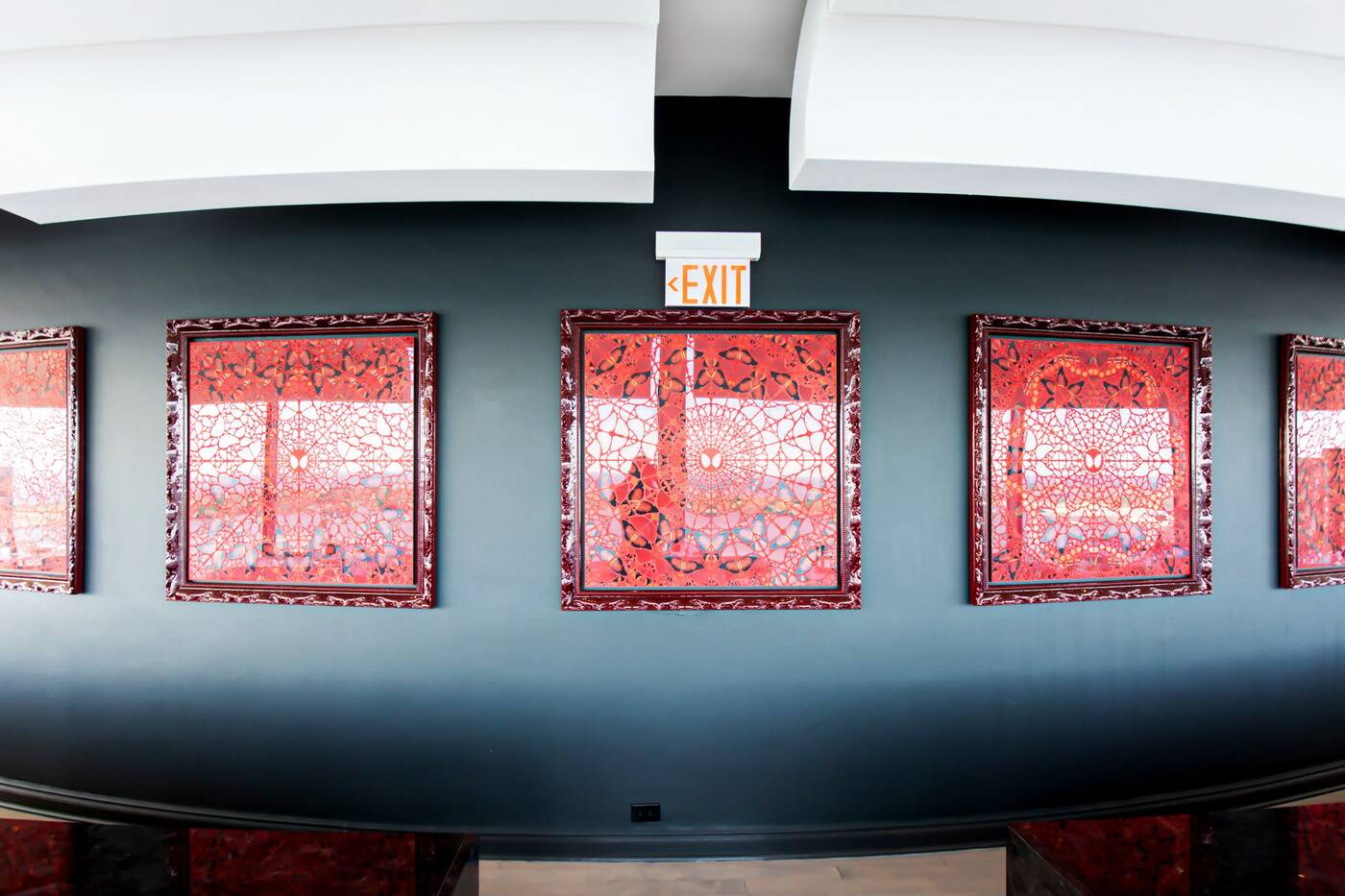 Contemporary art wraps around the restaurant including original pieces by artists like Mr. Brainwash and Damien Hirst. 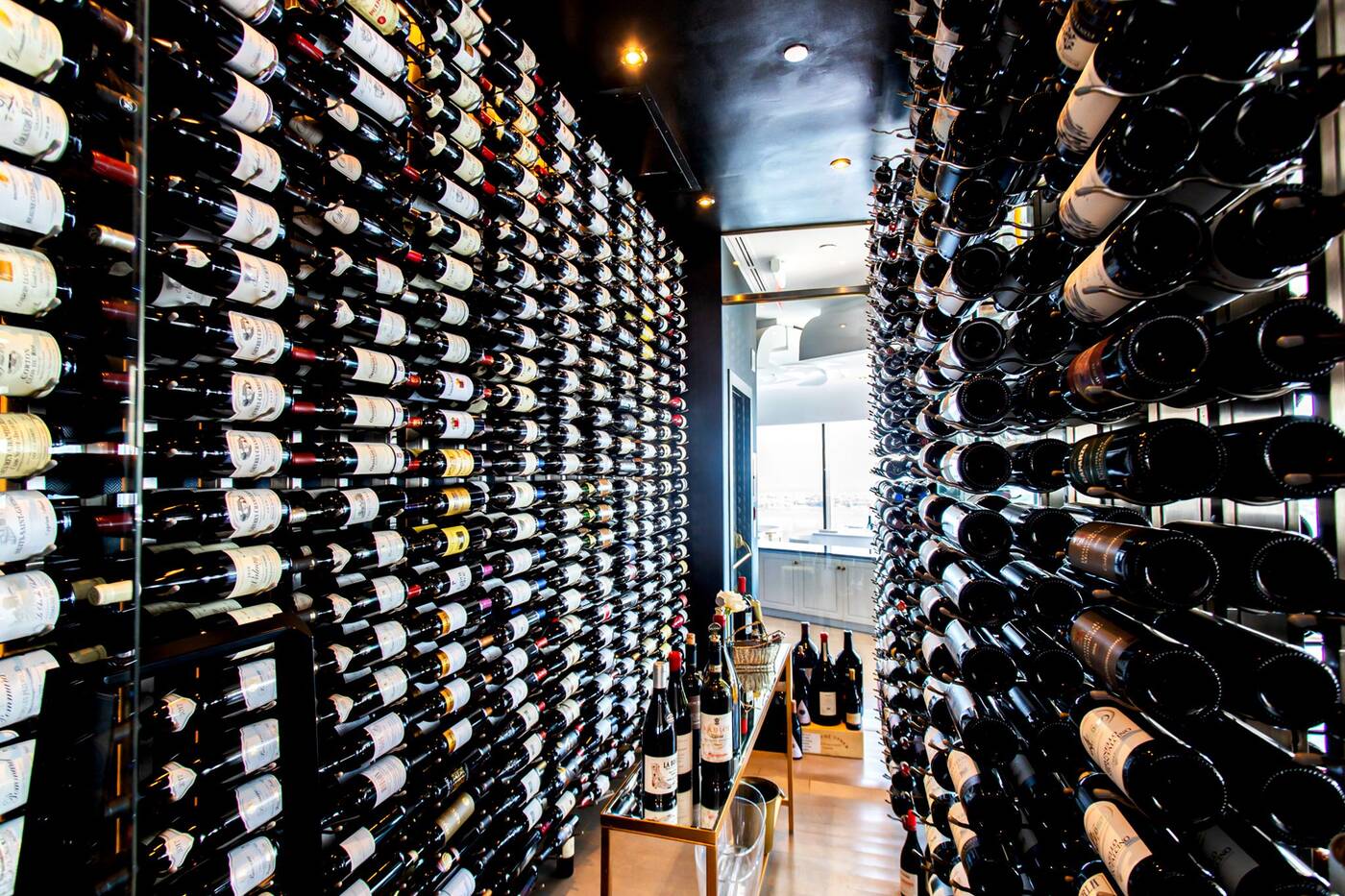 Don Alfonso has two impressive wine cellars within the dining room that hold over 2,400 bottles of wines hailing from all over the world, although the list leans heavily towards Italian and Californian producers. 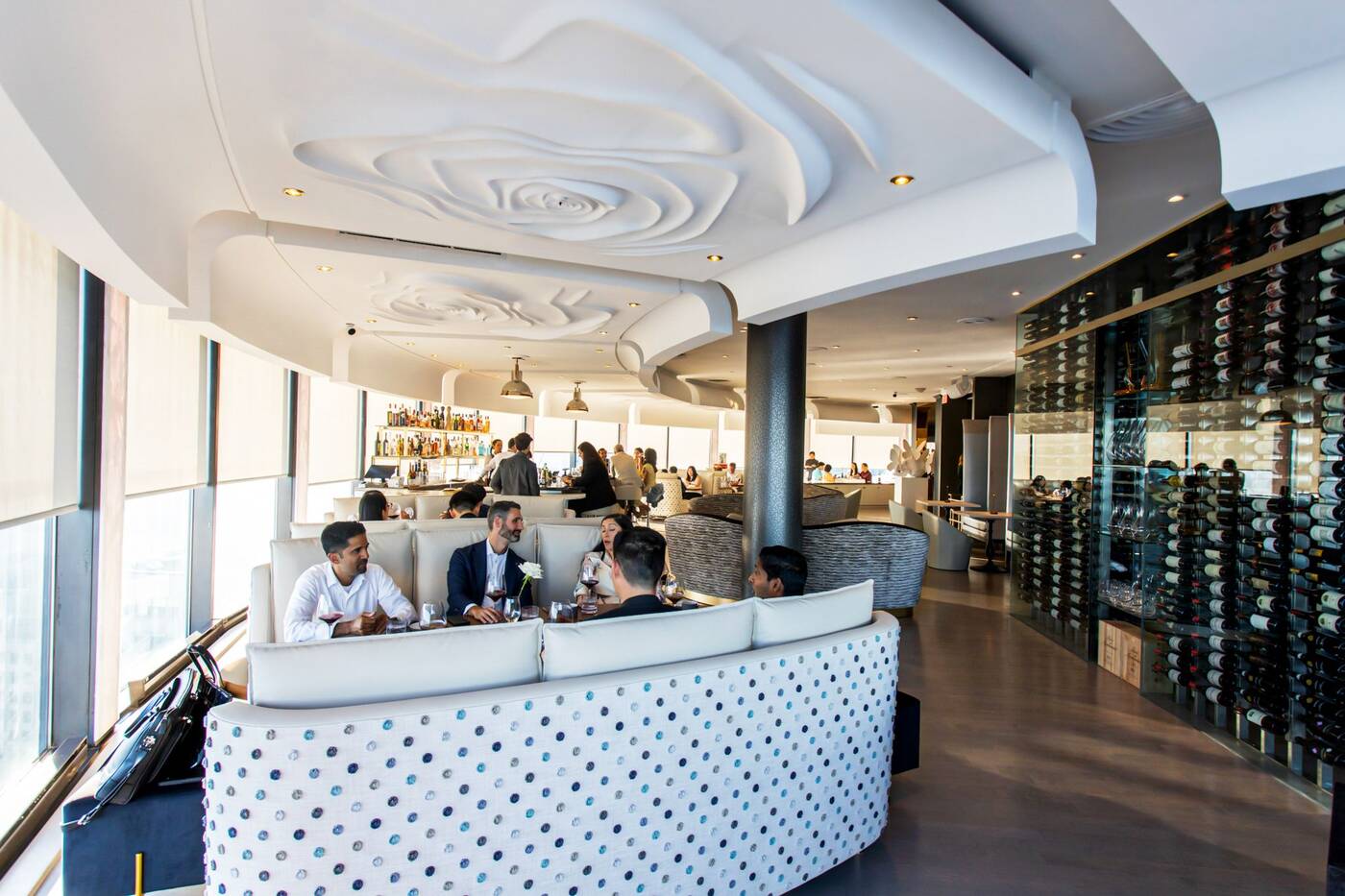 The elegant space is filled with intricate details. Look up and spot moulded rose ceiling imprints that appear to blossom over the tables.

It's a pattern that's also found in one of the custom plates the restaurant uses in their signature tasting menu to serve their Vermicelli di Gragnano with Carpione-style mackerel dish. 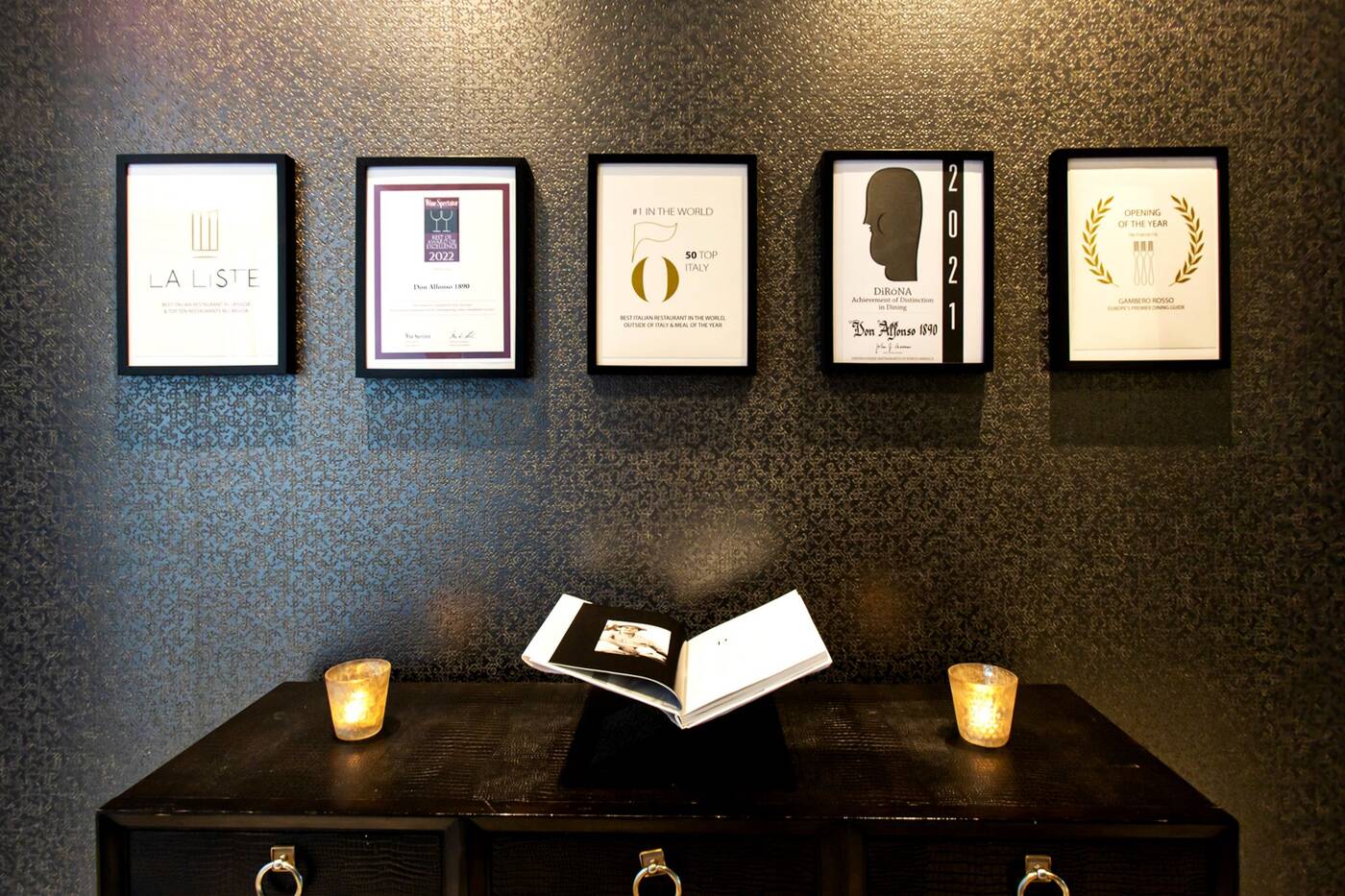 Don Alfonso has an array of awards under its belt for both food and design. This year, they took the number one spot for best Italian Restaurant in the world outside of Italy by 50 Top Italy. 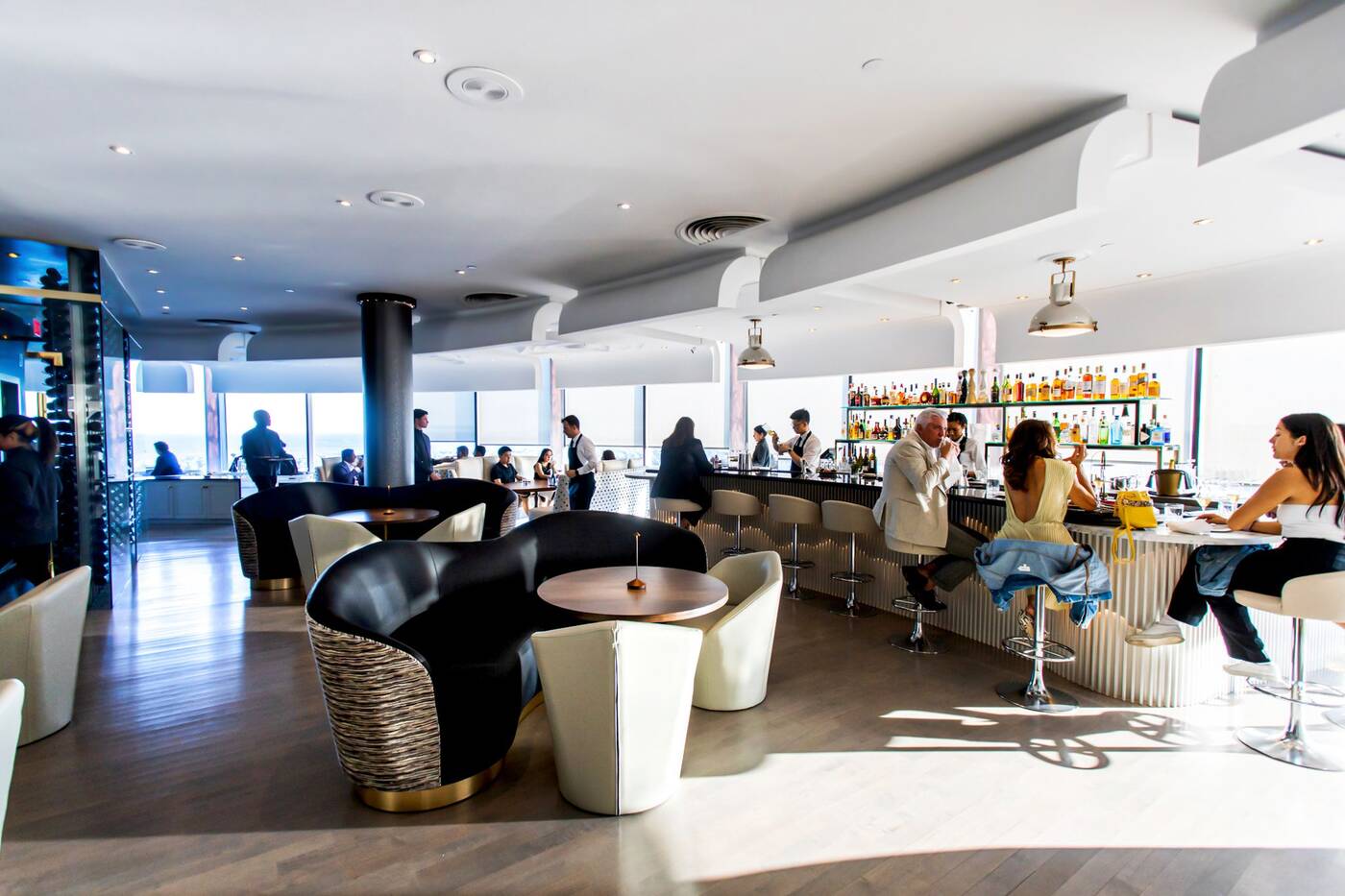 Whether you plan to stop by for snacks and cocktails in the lounge or a full sit-down dinner, the service is top-notch.

In addition to the time spent explaining the details of each dish to the table, the staff will ensure your water glass will hardly go empty. 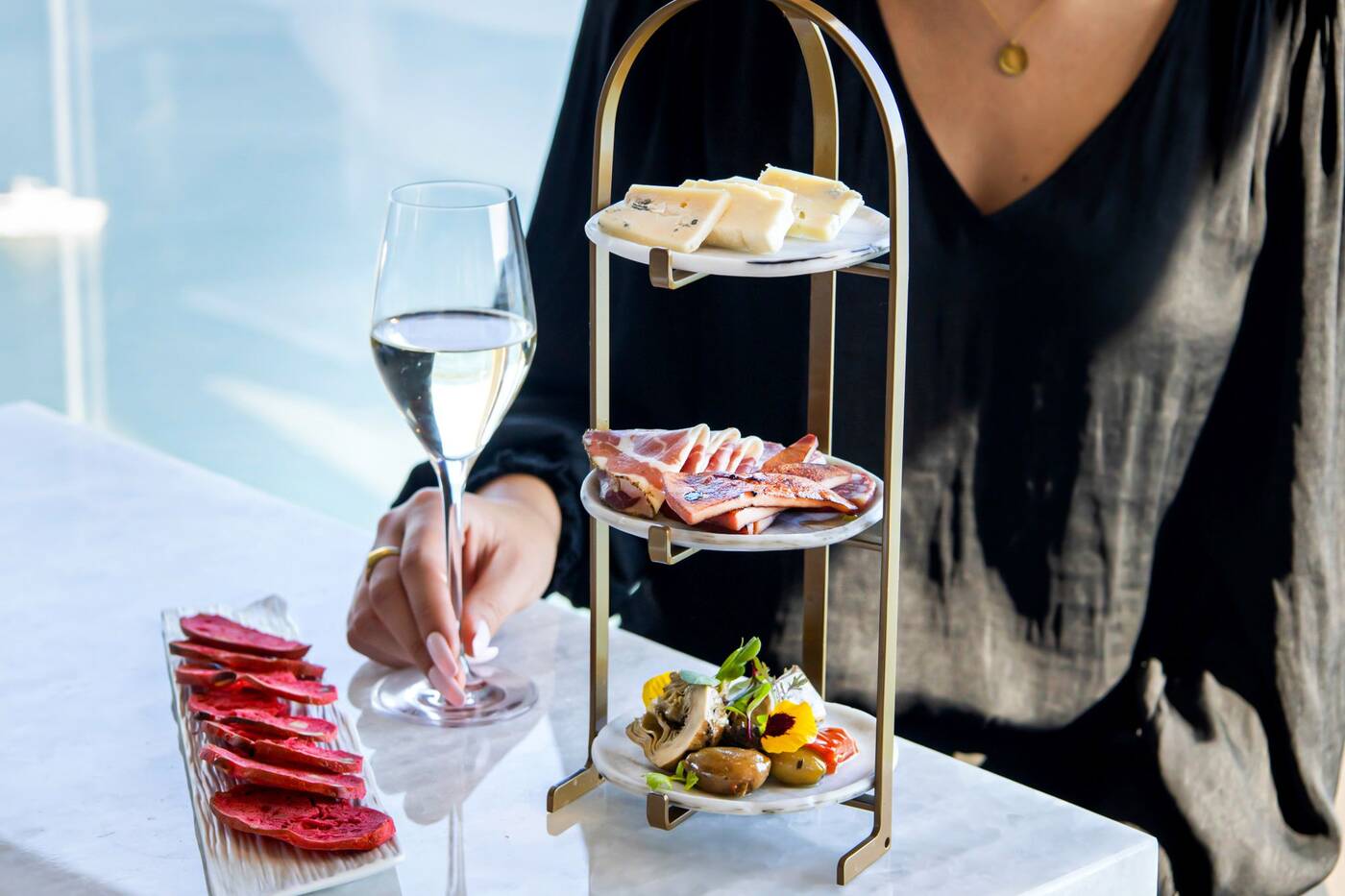 From the bar snack menu, I tried the La Nostra Selezione di Salumi e Formaggi ($30.00), a mixed antipasti board that's served as a three-tier tower.

At the top, there was a mix of soft cheeses which pair well with the accompanying platter of homemade red beet crostini. 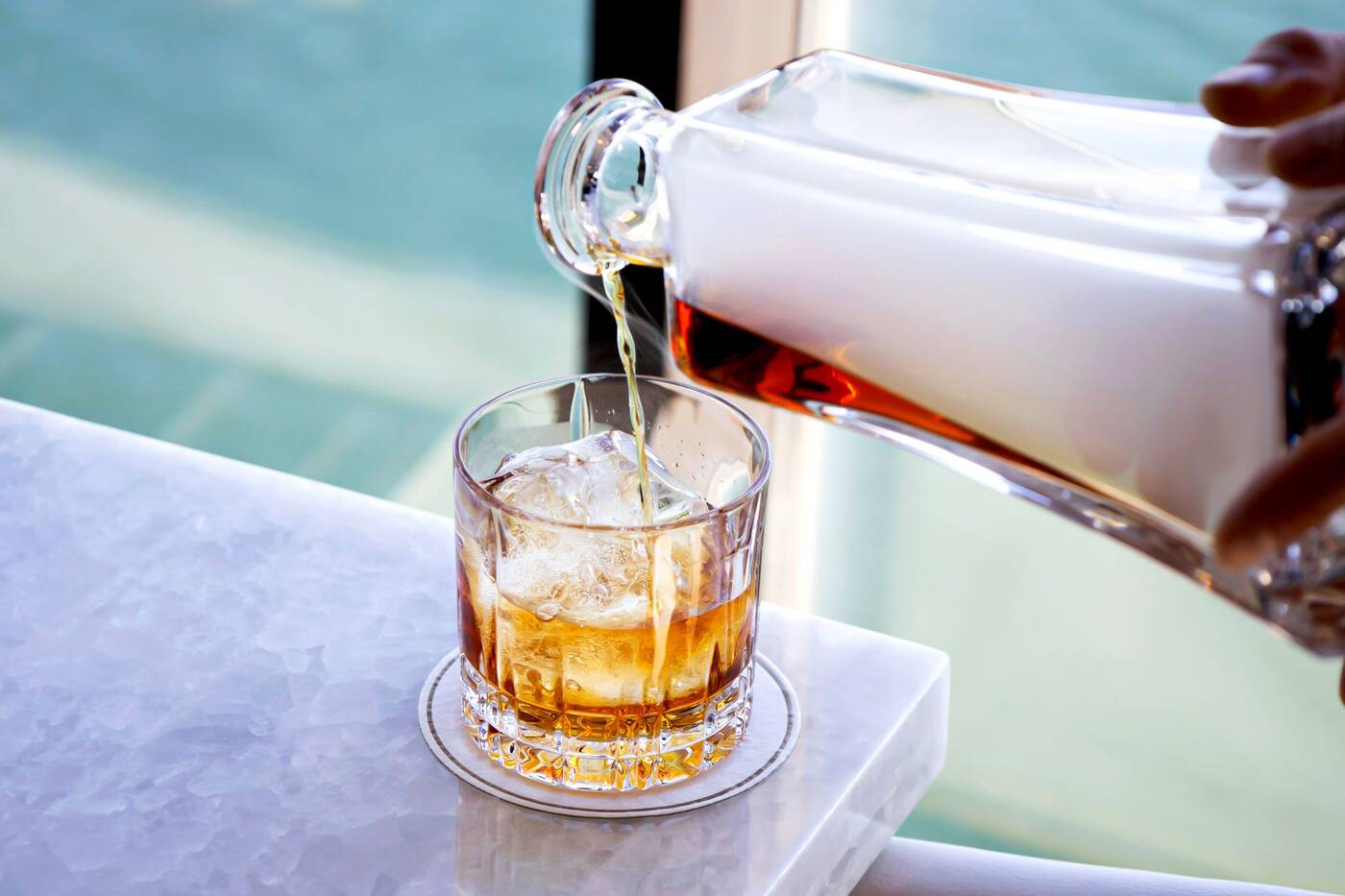 Many of the crafted cocktails have an interesting visual element, including the popular Affumicato ($36.00). 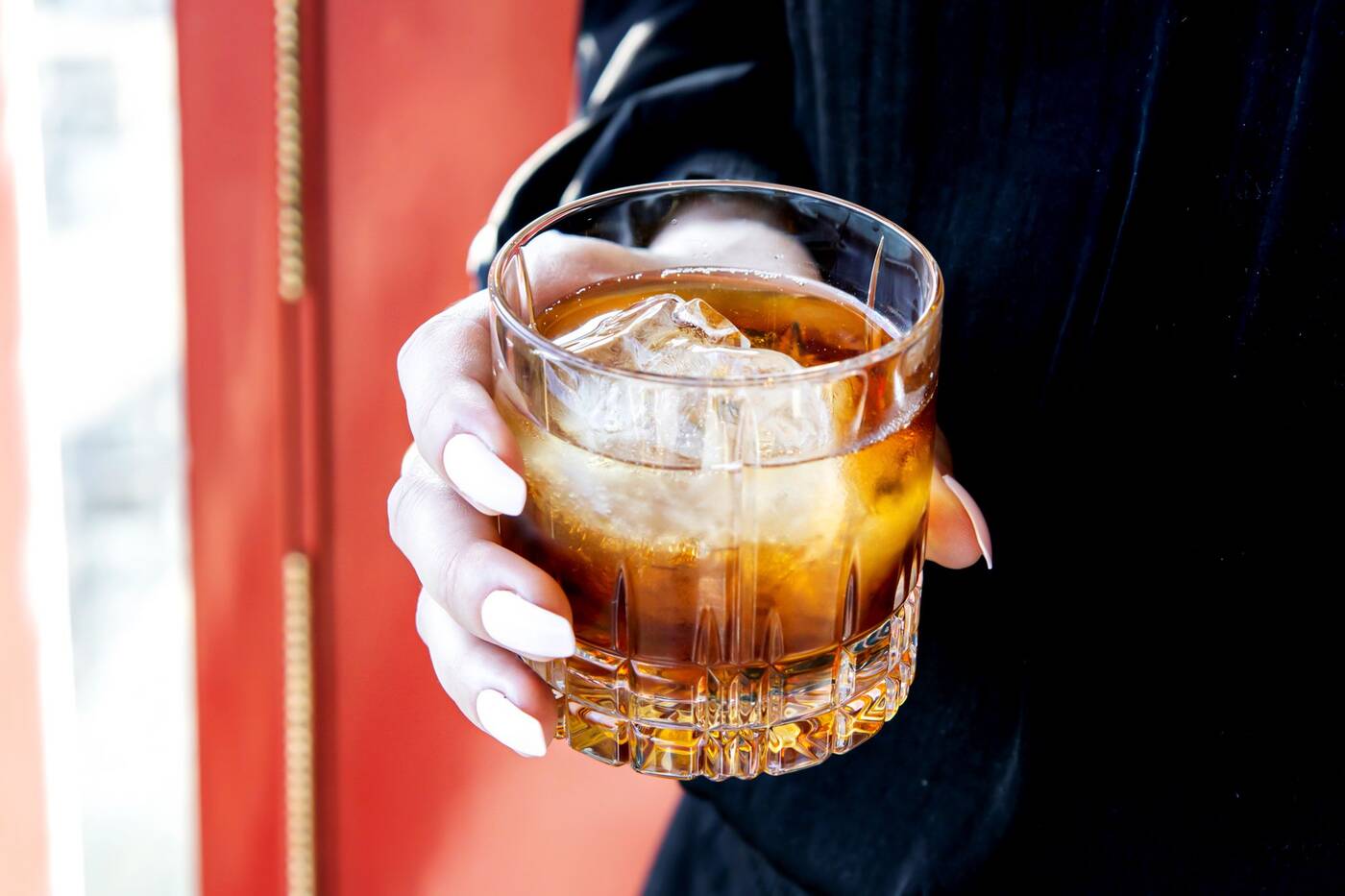 Made from Remy VSOP, aged Cuban rum and house-made sweet vermouth, the beverage is infused with applewood smoke and arrives at the table in a stylish decanter.

Served tableside, aromatic smoke billows out as the cocktail is poured to create a dramatic look. The smoke also gives the spirit-forward drink depth and a slightly sweet flavour.

Executive chef Daniele Corona is behind the food served at Don Alfonso Toronto. Dining parties can choose from two menus: a signature tasting menu that features eight inventive courses for $200.00 per person, and a three-course a la carte option for $130.00. 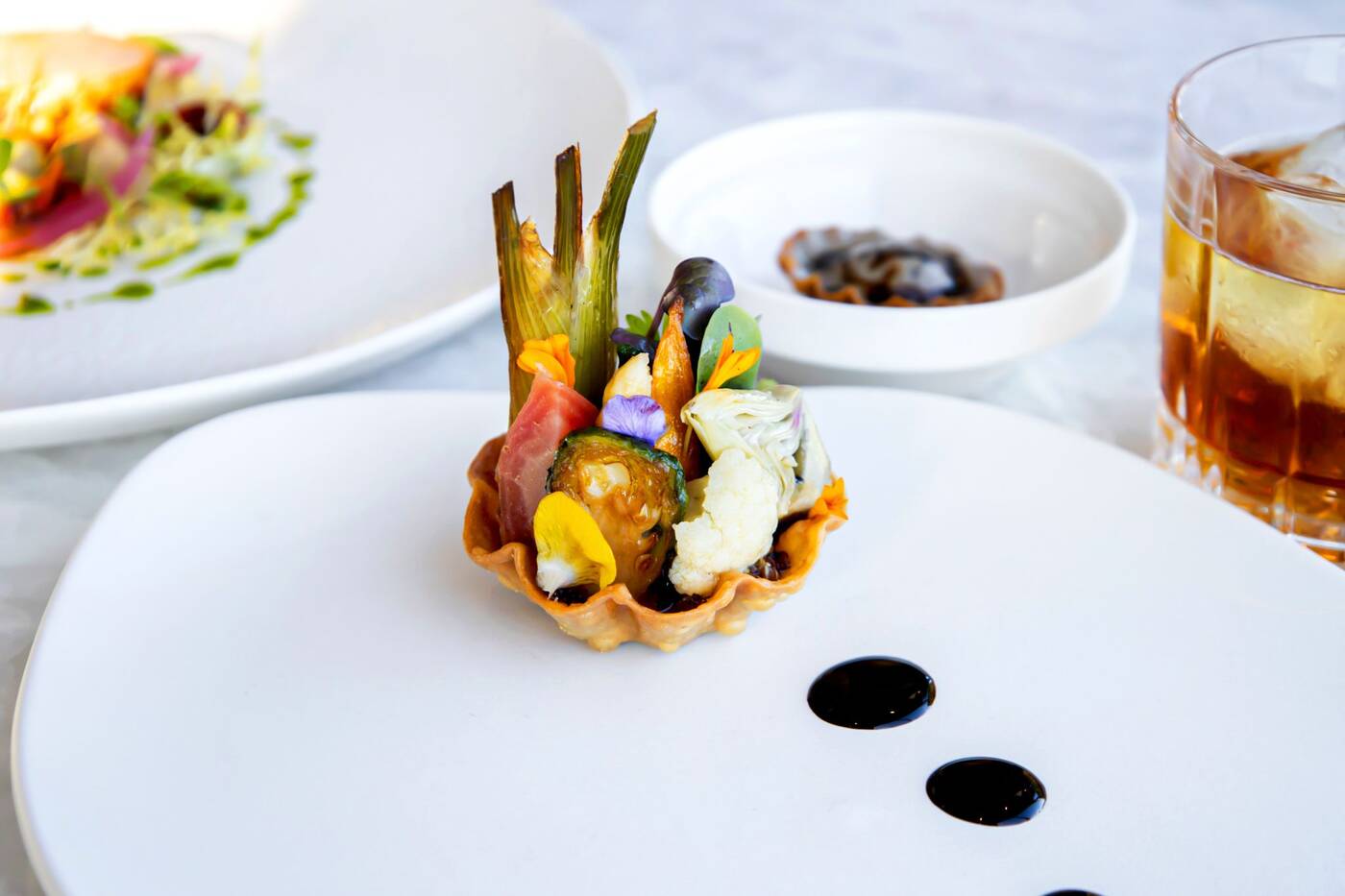 I choose to try courses from the a la carte menu. 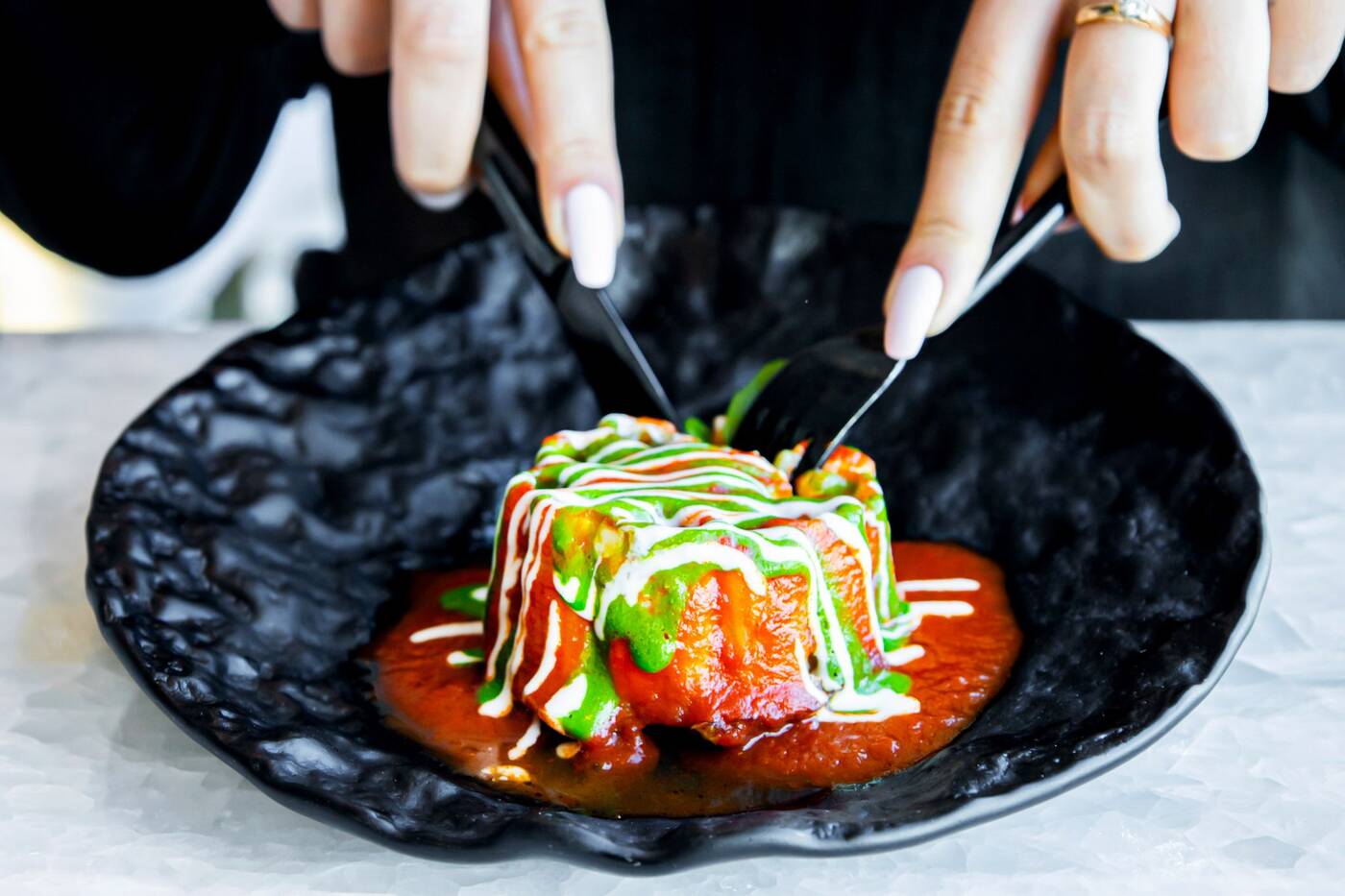 The Il Vesuvio di Rigatoni is a crowd-favourite and a structural marvel. Covered in bright San Marzano tomato sauce, the pasta is stacked together to form a ring that's easy to pull apart to reveal a creamy core made from buffalo ricotta and 36-month-aged Parmigiano Reggiano. 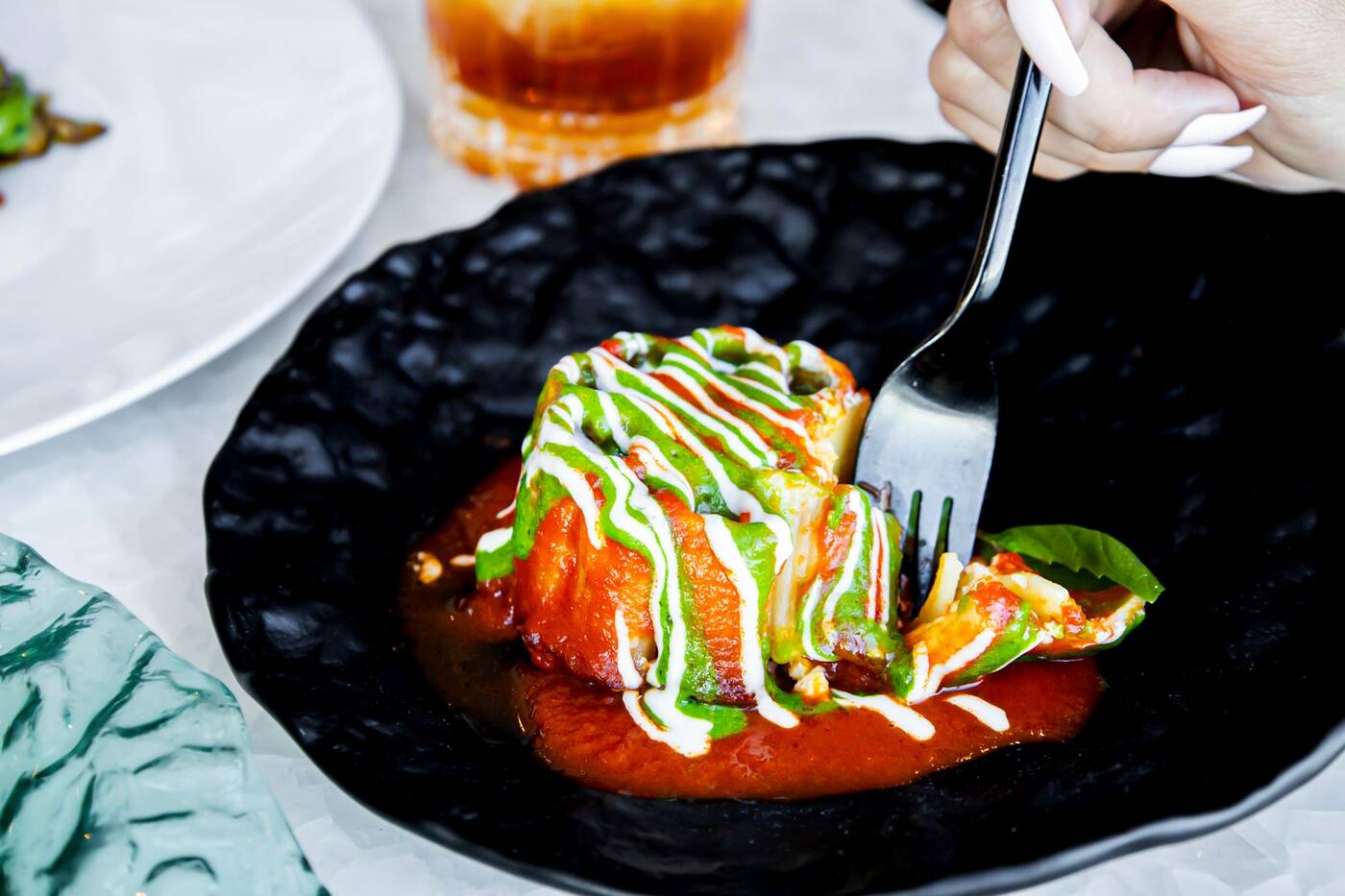 The vegetairan-friendly dish is drizzled with pureed organic peas to finish and is a fancy version of comfort food that's full of familiar flavours. 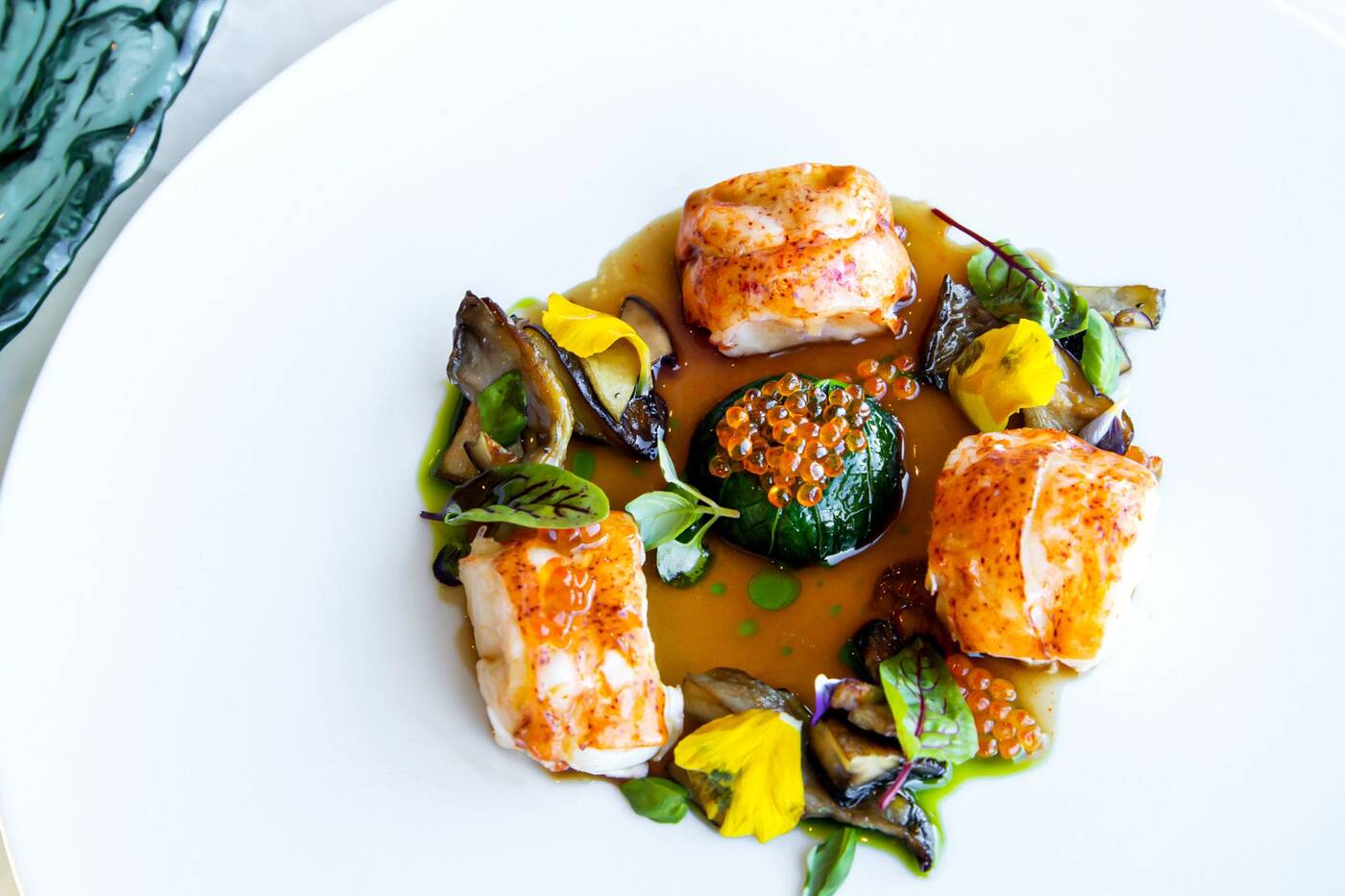 The lobster-based L'Astice is a secondi (main course) that's sure to satisfy seafood lovers.

The dish features a trio of sweet and meaty Nova Scotia lobster that are artfully arranged between mixed organic Ontario mushrooms and tender greens. There's also an escarole-wrapped involtino, and trout roe that pop to add a bright saline flavour. 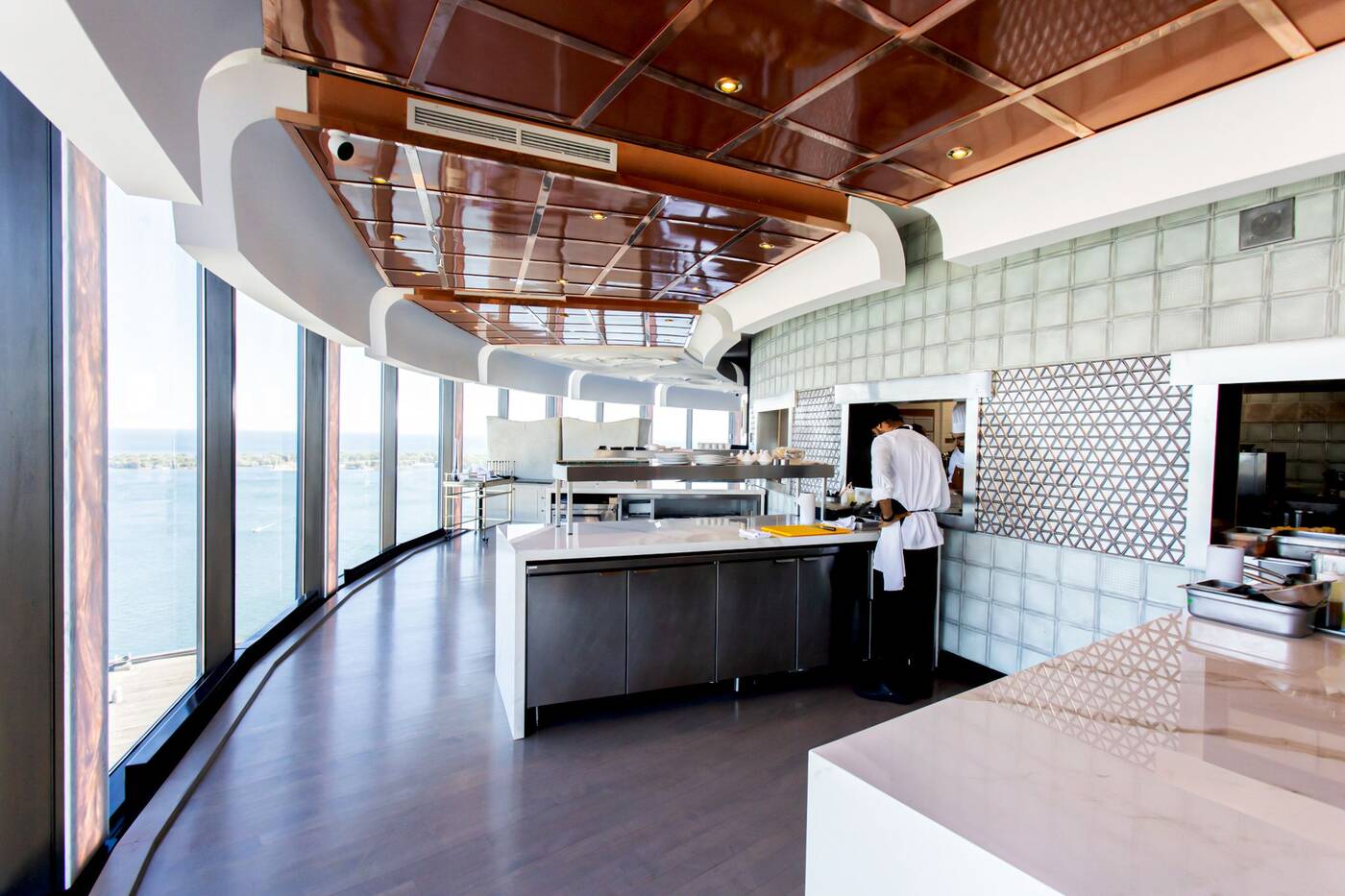 At the end of the meal, you and your table are invited to the open kitchen to meet Chef Corona and his team. 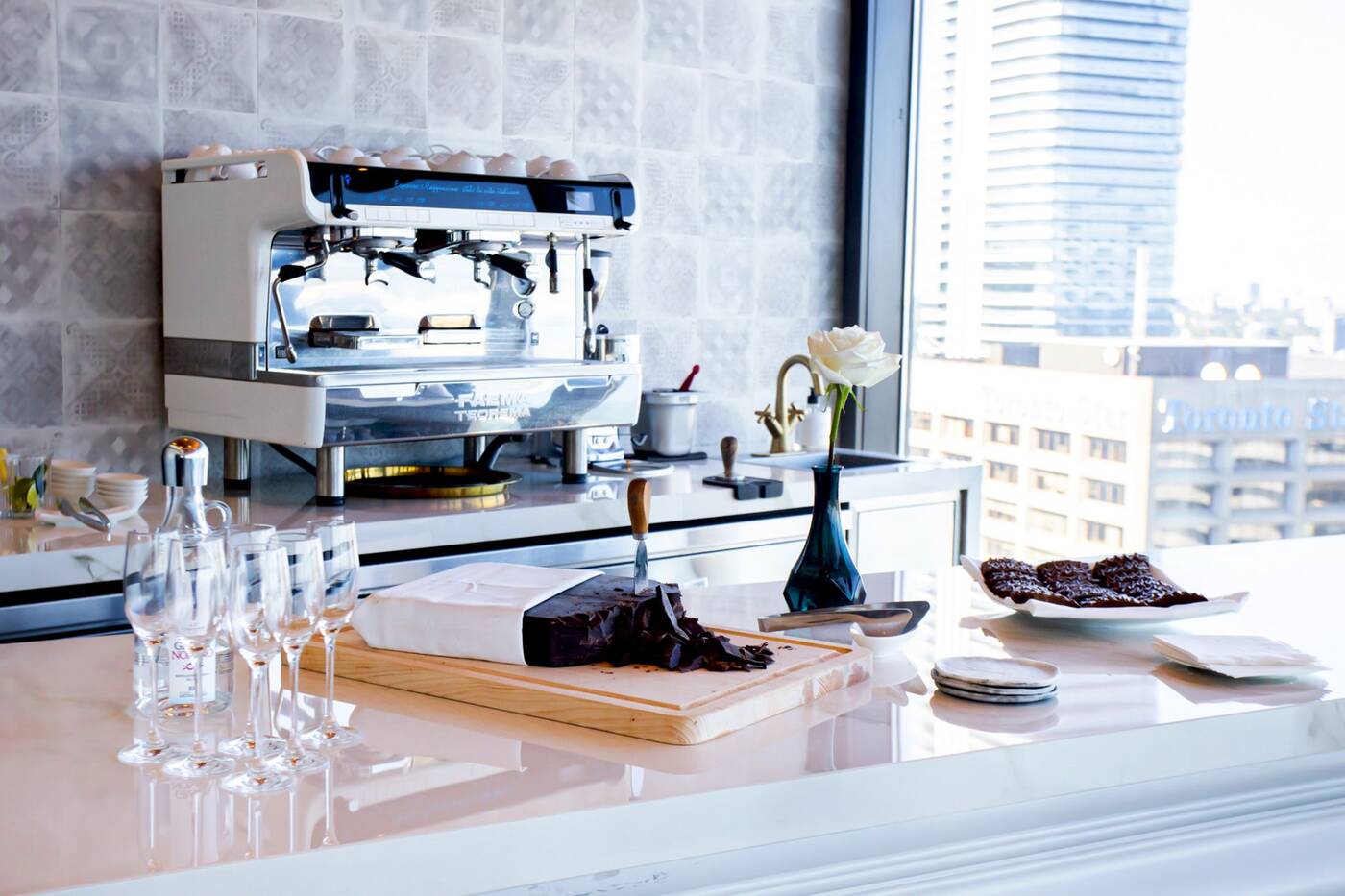 As a final experience, you can indulge in a post-meal coffee or grappa at a station past the kitchen where they are served dark chocolate made by SOMA Chocolatemaker and freshly-made Italian Mostaccioli biscuits. 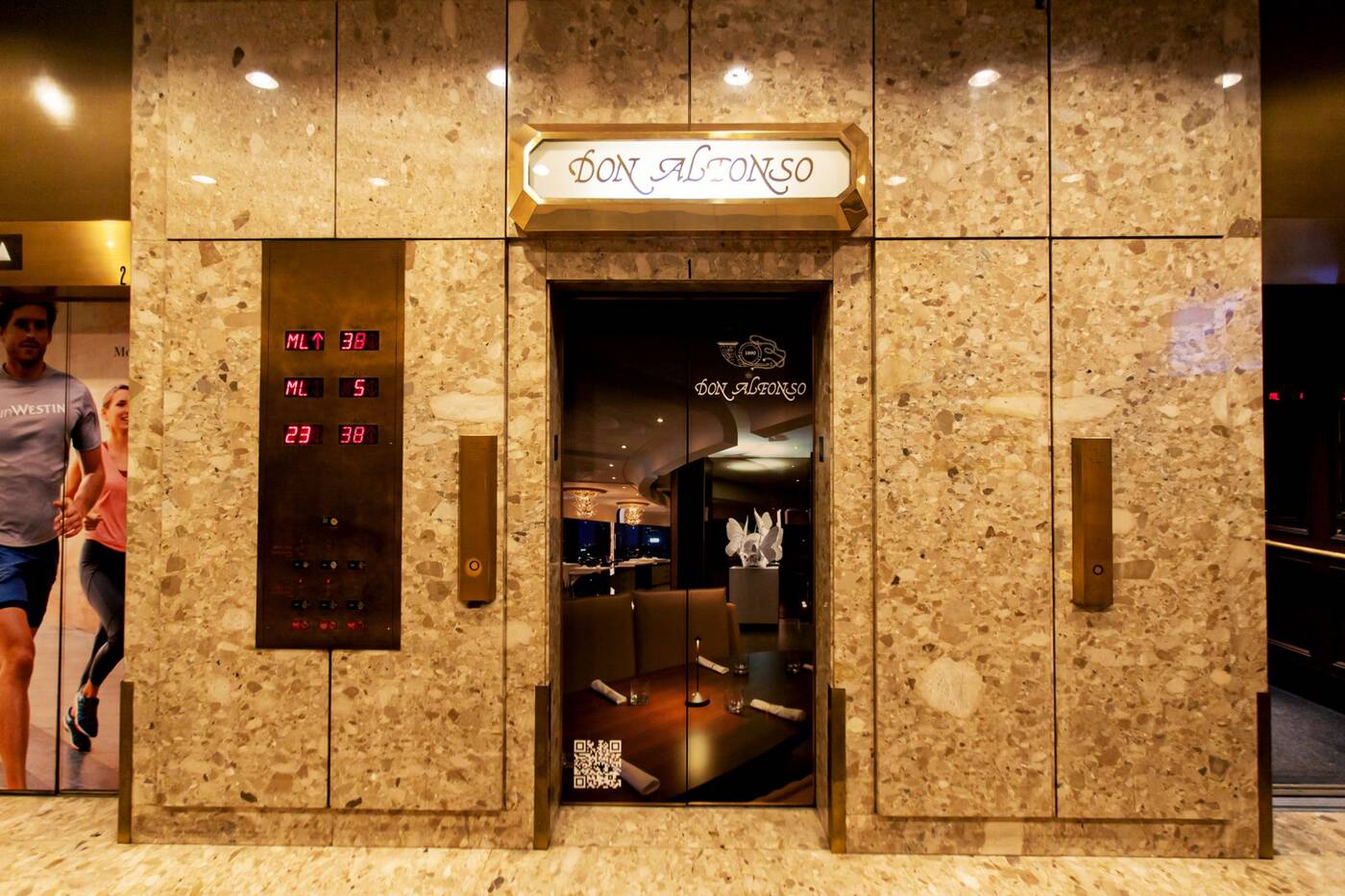 Don Alfonso is located on the right of the Westin Harbour Castle's main entrance. Take the scenic elevator up to the 38th floor where you'll be greeted upon arrival.