Mr. Brainwash (a.k.a. Thierry Guetta) has finally landed in Toronto. Befitting both his ascent up the ranks in the international art world and the inevitable numbing of his work's putative novelty, his latest show is not to be found in an old warehouse-turned-art-space as one might find on Sterling Road, but at the well established and somewhat conservative Gallery One in Yorkville. Far from past major exhibitions at which hordes of intrigued gallery-goers would line up for hours in anticipation of what awaited them, last night's opening was thus a smaller affair, multiple black-clad security guards notwithstanding. 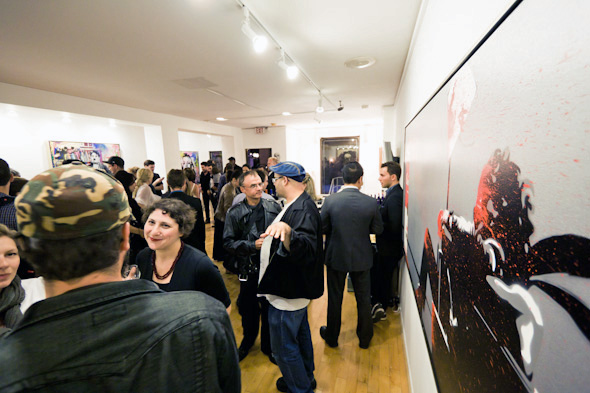 How does one add anything to the conversation about this artist's work? Thanks to his relationship with mega-street artists like Shepard Fairey and his role as the subject of Banksy's Oscar-nominated documentary Exit Through the Gift Shop, the story of Mr. Brainwash — his dubious talents, his marketing prowess and his subsequent commercial success — is about as well-known as contemporary art tales get. 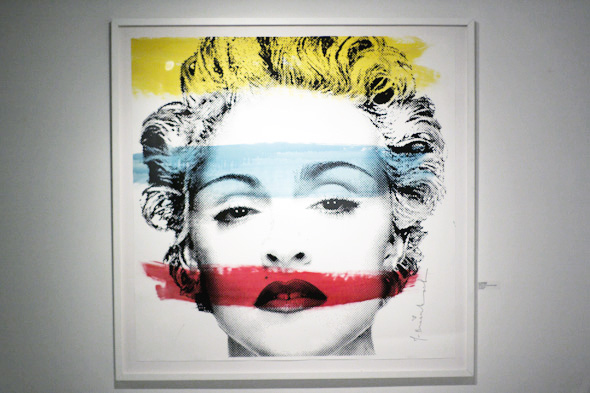 What the documentary doesn't answer — what it thrives on not answering — is, of course, whether or not the artistic career and persona adopted by Guetta is all one big hoax, Banksy's ultimate fuck-you to the art establishment and the market-driven forces that underwrite the valuation of creative objects. If Mr. Brainwash can sell six figure paintings and attain such cachet in the art world without ever lifting brush to canvas, so the argument goes, the whole system must be bankrupt. 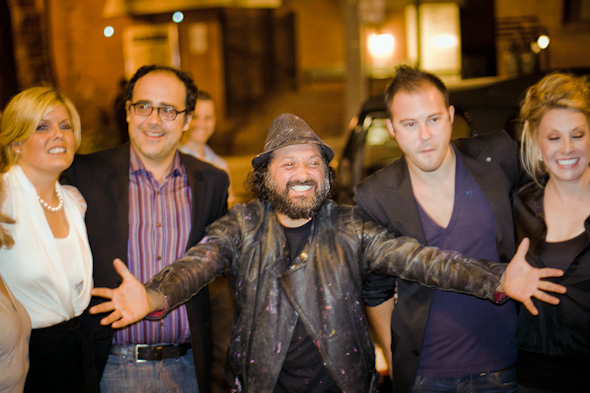 It's a seductive theory given just how obviously derivative Guetta's work is, but it doesn't give Banksy much credit for originality either. Who, after all, needs to be taught (once again) that the monetary value of artwork isn't necessarily based on its aesthetic or conceptual merits? Andy Warhol staged how this works long ago, and the point is confirmed every time a Britney Spears song plays. 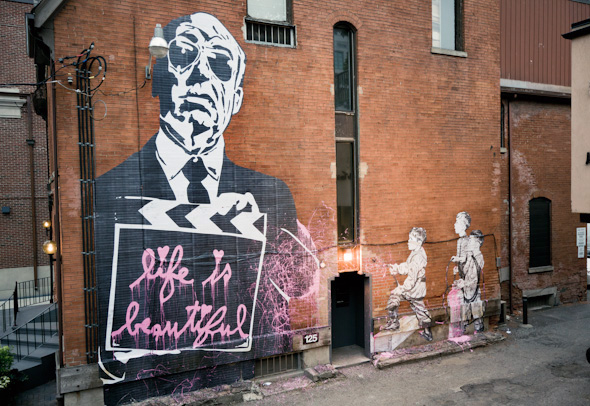 Besides, if it is Banksy pulling the proverbial strings, this very act would further reinforce the genius status already attributed to him by collectors and dealers and thereby render Mr. Brainwash but a minor anomaly in an otherwise fair and logical marketplace. Banksy's work has sold for almost $2-million at auction, while the majority of Mr. Brainwash's pieces in Toronto range between $12,000 and $40,000. Not exactly chump change, but based on the artist's notoriety and the degree to which he's seen as tied to Banksy, it's not quite as outlandish as some would have it. 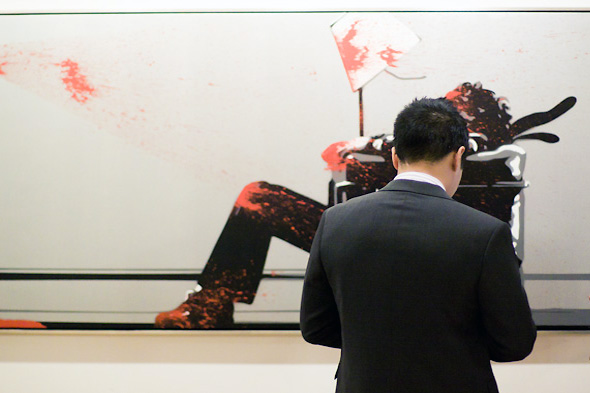 That last part, I suspect, is why Mr. Brainwash enjoys the status that he does — at least for now. His Warhol-derived pop iconography and Banksy-inspired attempts at irony might ultimately look like what you'd expect to find on a t-shirt or poster in a head shop somewhere, but it doesn't really matter. This is about spectacle, something that Guetta's been invested in ever since he started recording every facet of his life on video, but which was brought to the fore when he met Banksy and then when Exit Through the Gift Shop was released.

If you've seen the movie, you know the story. You know that Guetta doesn't paint his own stuff, that his ideas are recycled, and that he never paid his artistic dues. And yet there remains a fascination with his narrative that compels people to get into a gallery to see it play out. How else, after all, are we supposed to be a part of the show?

Original Works by Mr. Brainwash runs at Gallery One until October 22nd, 2011. 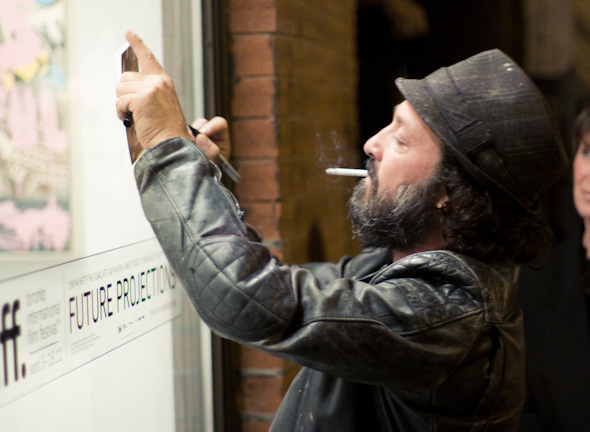 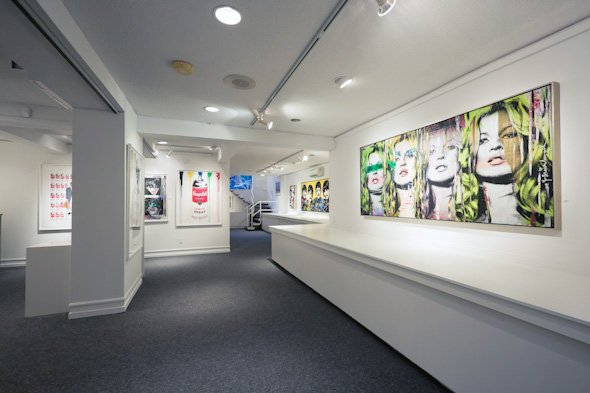 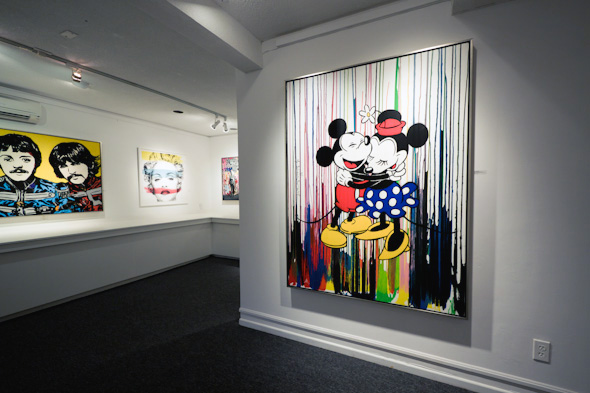 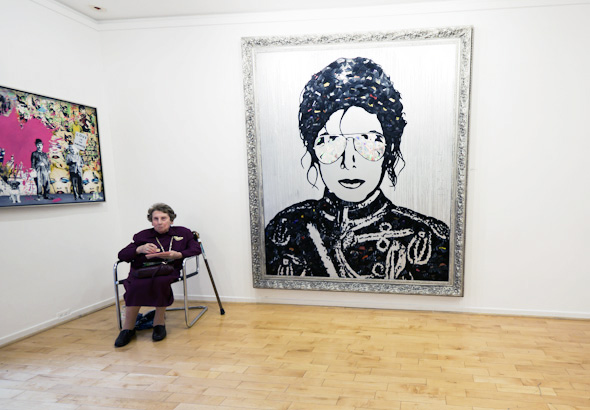 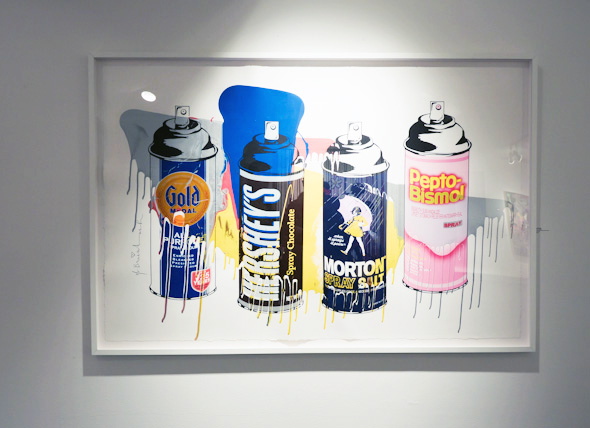