Dog & Bear is currently open but their offerings and services may be affected due to the pandemic. Please contact the business directly for more information about any changes. Is this your business? Please contact us if you would like to update this message.

The Dog & Bear pub is the latest iteration of 1100 Queen Street West, a space best known as the former home of the Social . Converted by members of the team behind Parts and Labour and the Hoxton , the once club-like space is now an Empire-styled pub, and one that should prove quite popular in a neighbourhood that's witnessed a massive influx of condo-dwellers over the last few years. While there's no shortage of restaurant and bar options in the area, the Dog & Bear still fills a hole with its sports-friendly atmosphere and traditional pub offerings. 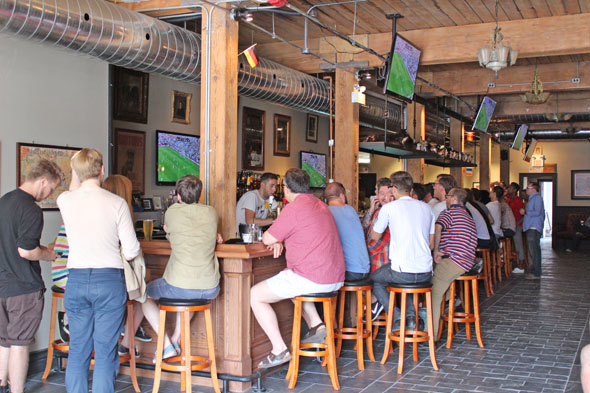 The walls are stone and hung with old-style tapestries, while large televisions above the bar face comfy booths on the opposite wall (thus giving them solid sight-lines). My visit happened to fall during a Euro Cup match between England and France, which left but one table available with out a wait â the one that doesn't have a complete view of the televisions. I didn't mind though, because on any other day, the gorgeous wooden table set against the window would make for an ideal people-watching spot.

As far as the food and drink goes, the beer selection is decent (I counted around 20 draught offerings or so), but by noon on game day they were already running dry on over half their stock. This wasn't a total loss as there was still plenty to choose from and the type of snafu one tends to chalk up to the early period of an establishment's life. And besides, we were there for the pub grub, and first up was the fish and chips ($17). 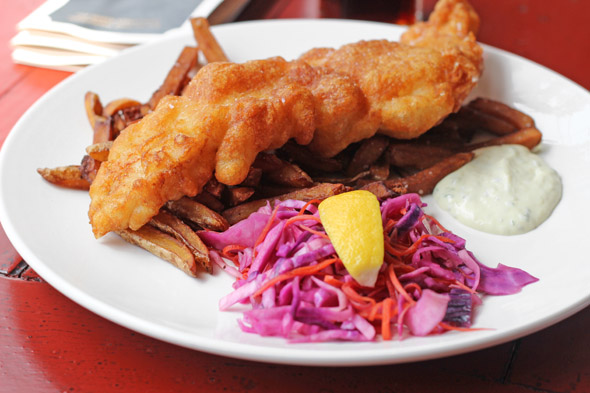 The fish was tender without being soggy, and the batter was nicely crisp. The fries were brown and soft, like those one expects from a chip truck. It's not the best fish and chips I've ever had, but the dish isn't an overall miss either. The highlight was the tangy slaw, which added som much needed crunchy texture and and some acidity to cut through all the batter. For $17, I'd expect a bit bigger portion, but nothing's altogether cheap here. 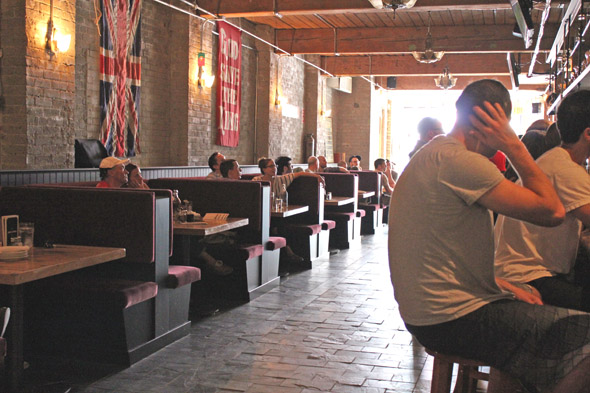 Next, I went with another pub staple, the cottage pie ($12). It was accompanied by a delicious onion gravy that was served separately, meant to be added once I'd cracked the crust of the mashed potatoes. I had a few bites before adding the gravy, and it was a wise choice.

The pie is made with an adequately fatty ground beef, so it has an amazingly full beefy taste, and is complemented nicely by the buttery potatoes. There could have been more vegetables in there, but the onion gravy, once added, brought out such a rich flavour combination that I hardly even missed them. 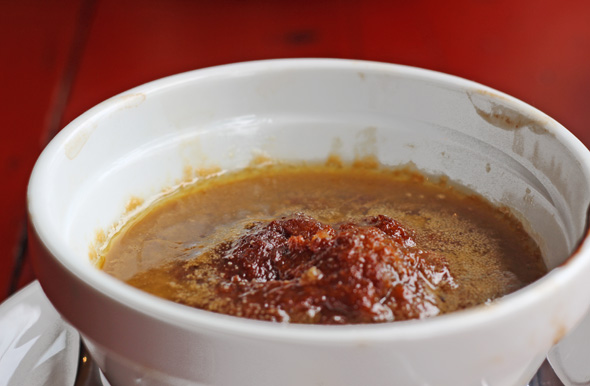 After all that we were rather full, but I had to get my favourite British dessert â sticky toffee pudding ($6). It's a simple treat: just soft cake covered in thick, sweet sauce. The pudding served by Dog & Bear is indeed sticky and sweet, but it unfortunately also came served in enough butter to poach a fish.

There was not nearly enough toffee flavour to justify the amount of liquid. Sticky toffee pudding is not a dessert for the calorie-conscious to begin with, but this was a bit much. Once I got to the centre of the dish, I felt like I was eating an over-zealously buttered muffin. 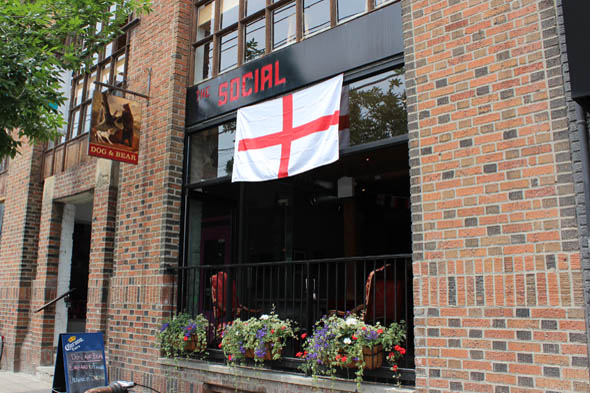 While there were a few misses with the food, the overall experience here was pretty good, made even more exciting by the game. I'll likely be back to have that cottage pie again, and hopefully the beer selection will be as diverse as it's intended to be.