The Derby opened this past summer on Dundas West at Dufferin, and it's what I'd classify as a classy neighbourhood sports pub (if a bar has a banker's/library lamp as part of its decor, it qualifies as classy, no?). It's not so big as to feel impersonal, and every one of the 35-odd seats in the joint has a good view of at least one of the flatscreens playing up to four different matches at a time.

Although its name references horse racing (while also a nod to the now-defunct L.A. club featured in Swingers , which was part of a chain of Brown Derby restaurants that once included a Toronto location at Yonge and Dundas ), this bar will air anything competitive/sports-related, as reflected by the range of sports memorabilia hanging tastefully on the walls. 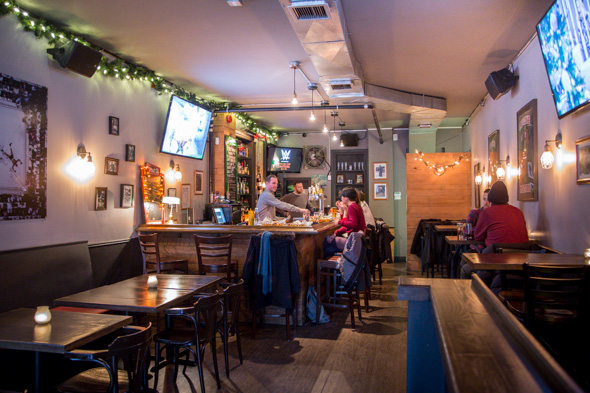 A friend of co-owners Craig "Blackie" Black, Chris Watson (formerly involved with The Social ) and manager Lawrence Bill (who also co-owns Bellwoods Barbers ) went to Caesars Palace in Vegas and placed $10 bets on Toronto for the NHL, NBA and MLB, gifting the bar with the framed tickets. (For those wondering, odds for both the Leafs and Raptors winning it all are 40 to 1, while the Jays are 15 to 1. Oof.) 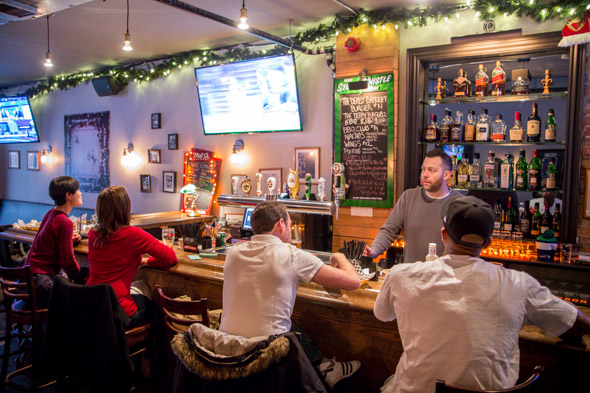 You can be sure to catch all those games here, not to mention football - the North American version (Black likes the Seahawks) and the British/European kind (aka, soccer). Doors will even open at 8 a.m. on weekends if there's a good match of note playing that day (Bill is originally from England and the bar draws some diehard EPL fans). 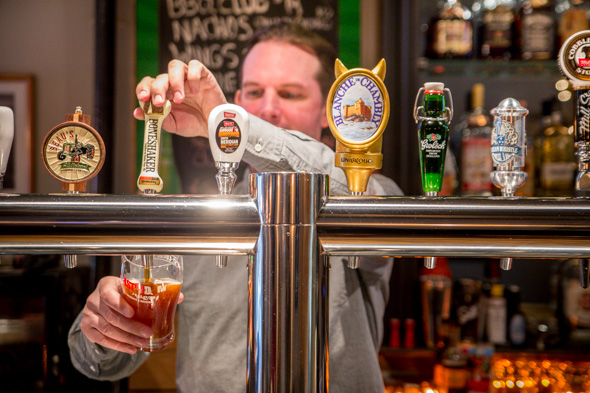 Black has noticed the Dundas West crowd mostly seems to prefer hoppy ales, but The Derby tries to have a variety of ales, lagers and ciders to choose from, with eight beers on tap ($7-8) - mostly Ontario selections from Beau's, Mill St. and Amsterdam. Tall cans ($6-7) include Magners, Strongbow, Kozel (a Czech lager), Kensington Brewing Co. 's Augusta Ale, Woodhouse Brewing Co. 's lager, and the inevitable PBR. There are $5 featured tall can specials on weekdays.

As for the eats, the menu is kept relatively simple and doesn't stray far from what you'd expect at a pub, but the aim is to do it better than the often-mediocre fare found in other sports bars. The kitchen likes to think local: bread is purchased from the Portuguese bakery down the street, and meats are obtained from the butcher nearby. 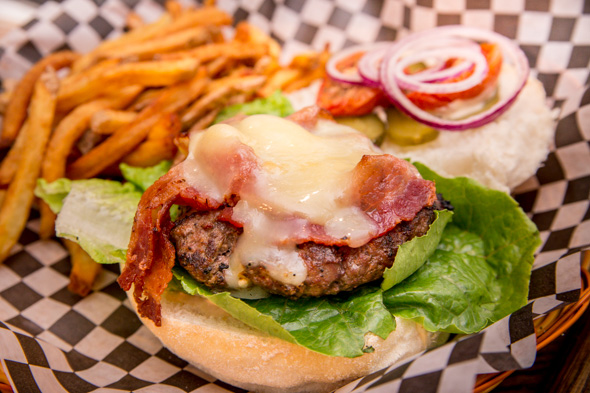 The signature Derby Banquet Burger ($14) consists of a handmade patty on a Portuguese bun, loaded with all the fixings: smoked bacon, jack cheese, lettuce, pickles, roasted tomato, and house-made chipotle mayo, accompanied by a side of hand-cut Russet fries. 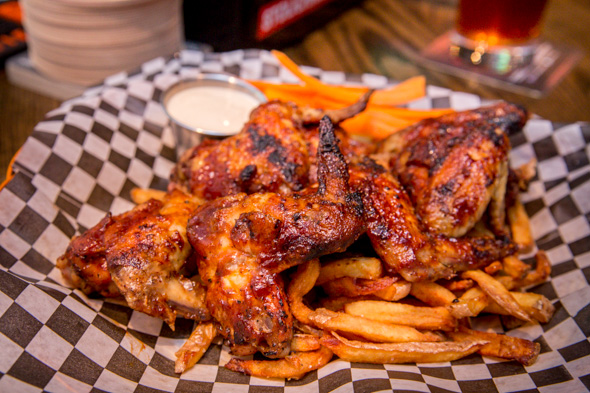 Applewood-smoked wings ($12) are smoked in-house and come with some veggie sticks and chipotle mayo dipping sauce. These are a fave among the pub's patrons, as are the nachos (chicken or chili, $12; chorizo or veg, $13), with house-made tortilla chips, guac and salsa; in addition to a three-cheese blend, diced jalapenos, cherry tomatoes and cilantro, bits of yam and corn add an unexpected but pleasant sweetness to the toppings. 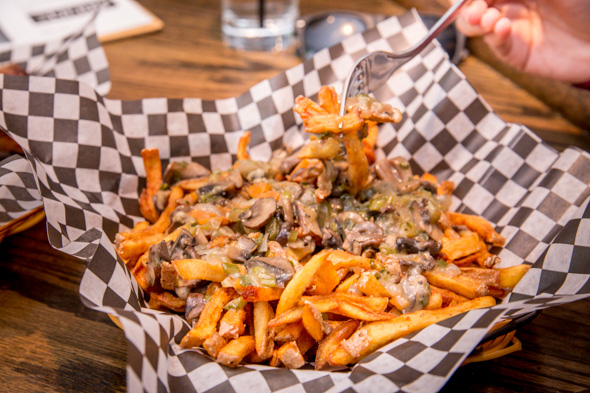 Veggie-friendly mushroom-gravy poutine ($10; also available: Quebec style, $10, and BBQ chicken, $12) uses real cheese curds (although I could have used a handful more of 'em) and a house-made sauce that Bill tells me takes three to five hours to make. 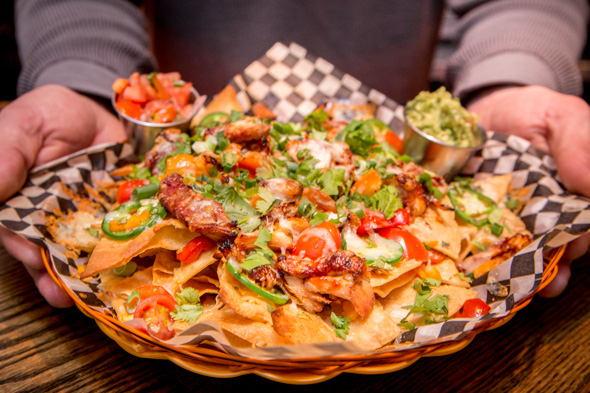 Breakfast/brunch is offered on weekends, with dishes like huevos rancheros and BLTs/BELTs on offer. Weekly pop-ups from Smoke Signals Bar-B-Q , serving up Central Texas-style beef brisket, ribs, sausages and pulled pork, are the perfect accompaniment for watching Sunday NFL games.

The Derby isn't just a sports bar. It also hosts DJ nights and special events, like a recent sold-out Murdoch Mysteries screening for mega-fans, with stars of the show in attendance (Black and Watson both work in film and first met on the set of the CBC show). Black has lived in the area for around eight years, witnessing the gradual - and ongoing - gentrification of Little Portugal, but he believes there's still a real community feel to the neighbourhood, and he hopes this bar will contribute to continuing that vibe. 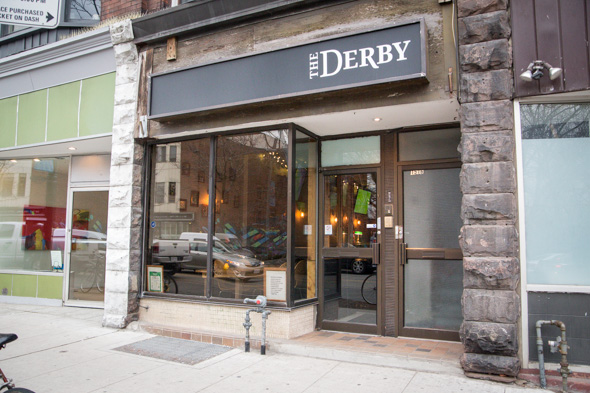