Delica Kitchen is the newest restaurant to open in the Yonge & St. Clair area, focusing on quick and healthy lunch fare and baked goods.

The neighbourhood is already home to a good number of restaurants catering to the weekday office crowd, but there is a conspicuous absence of places that satisfy both the "quick" and "healthy" criteria, and aren't Subway. Delica Kitchen aims to fill that gap with a selection of take-out sandwiches, salads, soups and baked goods, with an emphasis on local ingredients.

As a member of the aforementioned office crowd, I watched the construction work proceed at Delica over the last few months with visions of freshly made sandwich masterpieces dancing in my head as I wolfed down yet another cold cut combo.

When I finally got the chance to try the food last week, I wasn't disappointed on the sandwich front. The menu features three types of pre-made sandwich: Out the Door (cold and ready to go), A Couple Minutes (pre-made, but warmed to order) and Between the Grill (grilled cheese-style, done in a panini press).

Given that many of their potential office-worker clientele are almost too busy to chew, Delica Kitchen assembles their sandwiches ahead of time to streamline the ordering process. Don't worry though, this is not shrink-wrapped and preservative-laden food. Just about all of the components are made in-house with the exception of the bread, which is sourced from ACE Bakery (the owner of Delica is a daughter of the founders).

I tried the Banh Mi sandwich ($7.99) first. It's served warm, with pork, pickled carrots, cucumber and cilantro on a sesame baguette, along with a tiny container of Asian vinaigrette for dipping. The pork was a little dry, but the sandwich was a winner overall, with the fresh cilantro and tart carrots providing a nice zing. The vinaigrette was tasty too, but the small container made dipping a bit of a challenge. 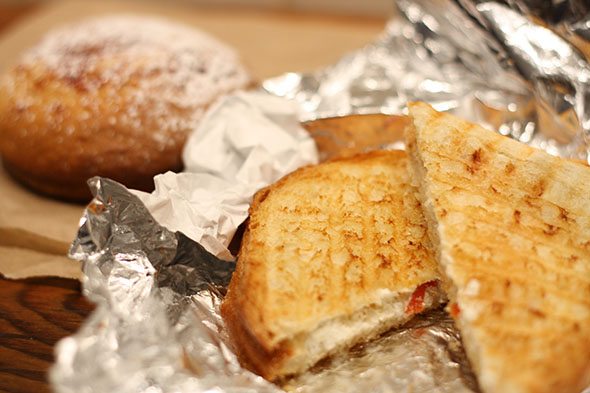 On my second trip, I decided to try the Italian Job ($5.99), a grilled sandwich with goat cheese and roasted red peppers. The concept was simple, but the execution was spot on.

The panini press results in a thinner, crispier grilled cheese than the classic frying pan method which may or may not be to your tastes, depending on your level of grilled cheese snobbery. I enjoy a squashed grilled cheese, so the press method used here was right up my alley.

All the grilled sandwiches at Delica are also available as triple deckers, which add another layer of filling and a third slice of bread for about $2 more. 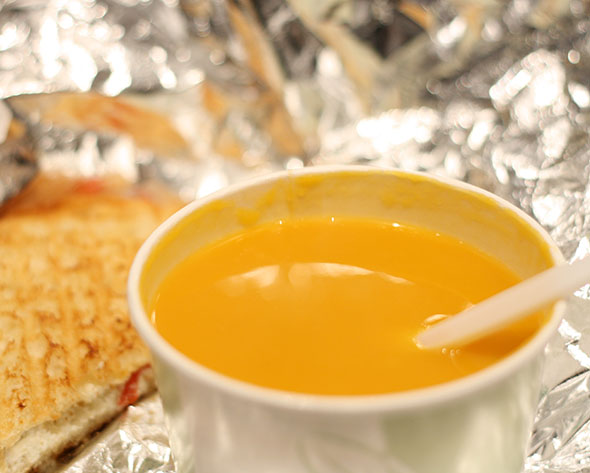 The sweet butternut squash soup (small, $3.99) is thinner than your typical squash soup, but well done, with a subtle touch of maple syrup giving it a bit of complexity. 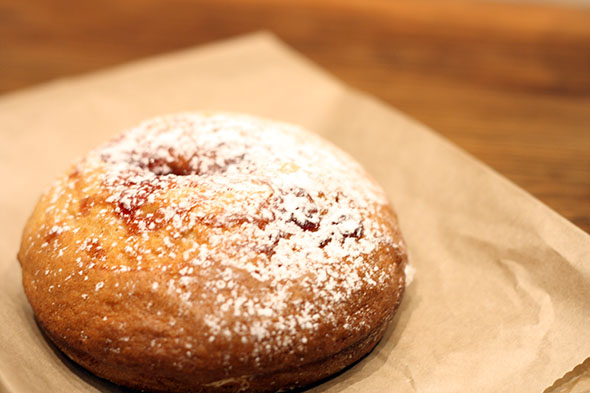 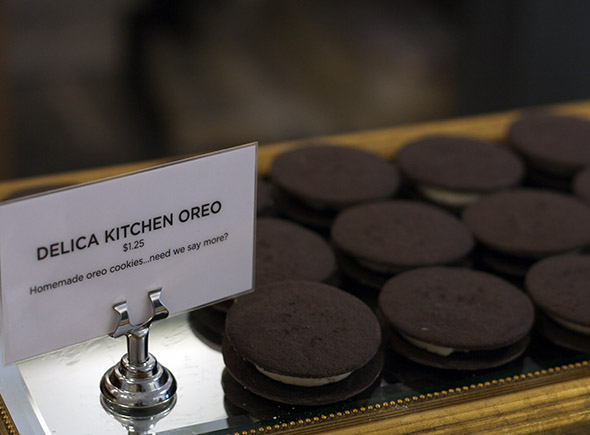 The menu also features an array of breakfast items and baked goods, all made in-house. As I was hovering over the dessert selection trying to decide between the homemade Oreo cookie and the strawberry jammie (a baked donut with a dollop of strawberry jam and a liberal sprinkling of powdered sugar), restaurant owner Devin Connell suggested that I go for the jammie ($2.50). It was sage advice. They whip up a batch of jammies each morning, and then again just before the lunch rush. I had the good timing to get one fresh out of the oven, and it was the moist, chewy, platonic ideal of what all donuts aspire to be. If you are a fan of donuts, I would urge you, in the strongest possible terms, to get yourself a strawberry jammie.

The restaurant itself is a small space, with a clean, classic feel. While the focus is on take-out, there are a few stools and some counter space towards the back of the restaurant, with a copy of Larousse Gastronomique to flip through for those in less of a hurry. It was pretty crowded when I was back there, though, which didn't leave much room for eating, let alone perusing large hardcover books.

Overall, the food quality at Delica Kitchen is great. The higher than fast food price range means it will probably be an occasional lunchtime highlight rather than a day-to-day favourite, but if you are in the neighbourhood and looking for something quick, tasty, and reasonably healthy, Delica Kitchen is a welcome addition to the area. 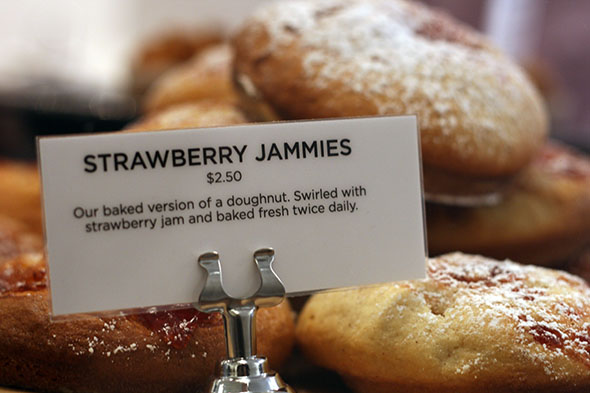 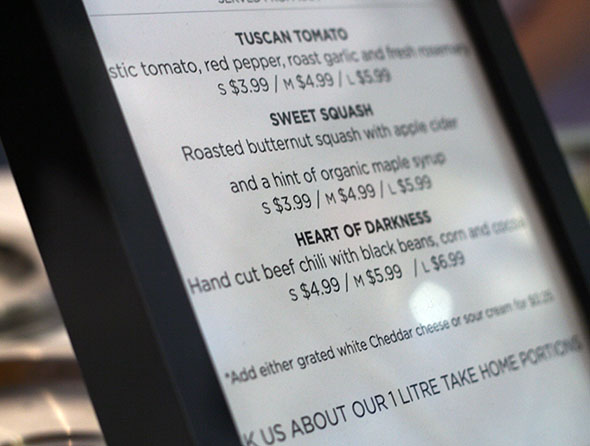 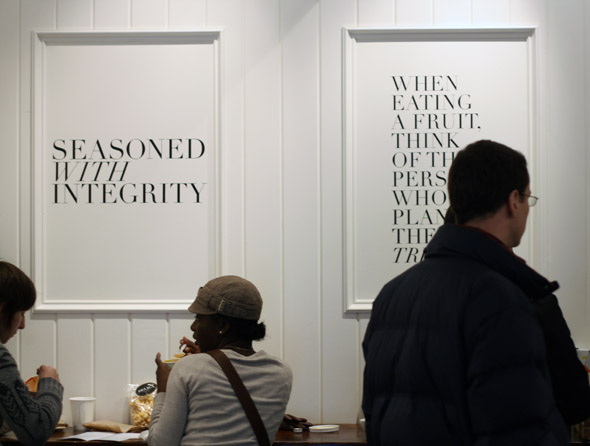 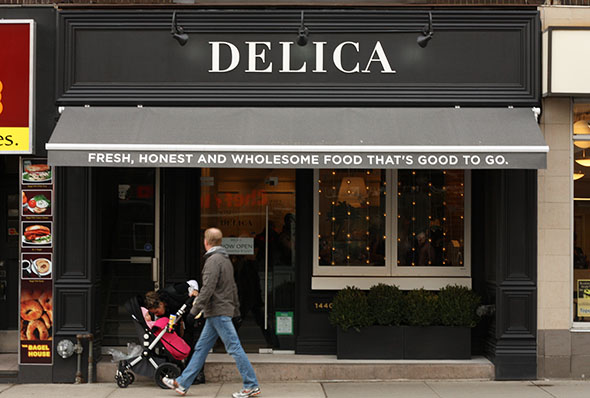