Bryden’s is a charming old neighbourhood bar, quietly making some of the best pub food around. 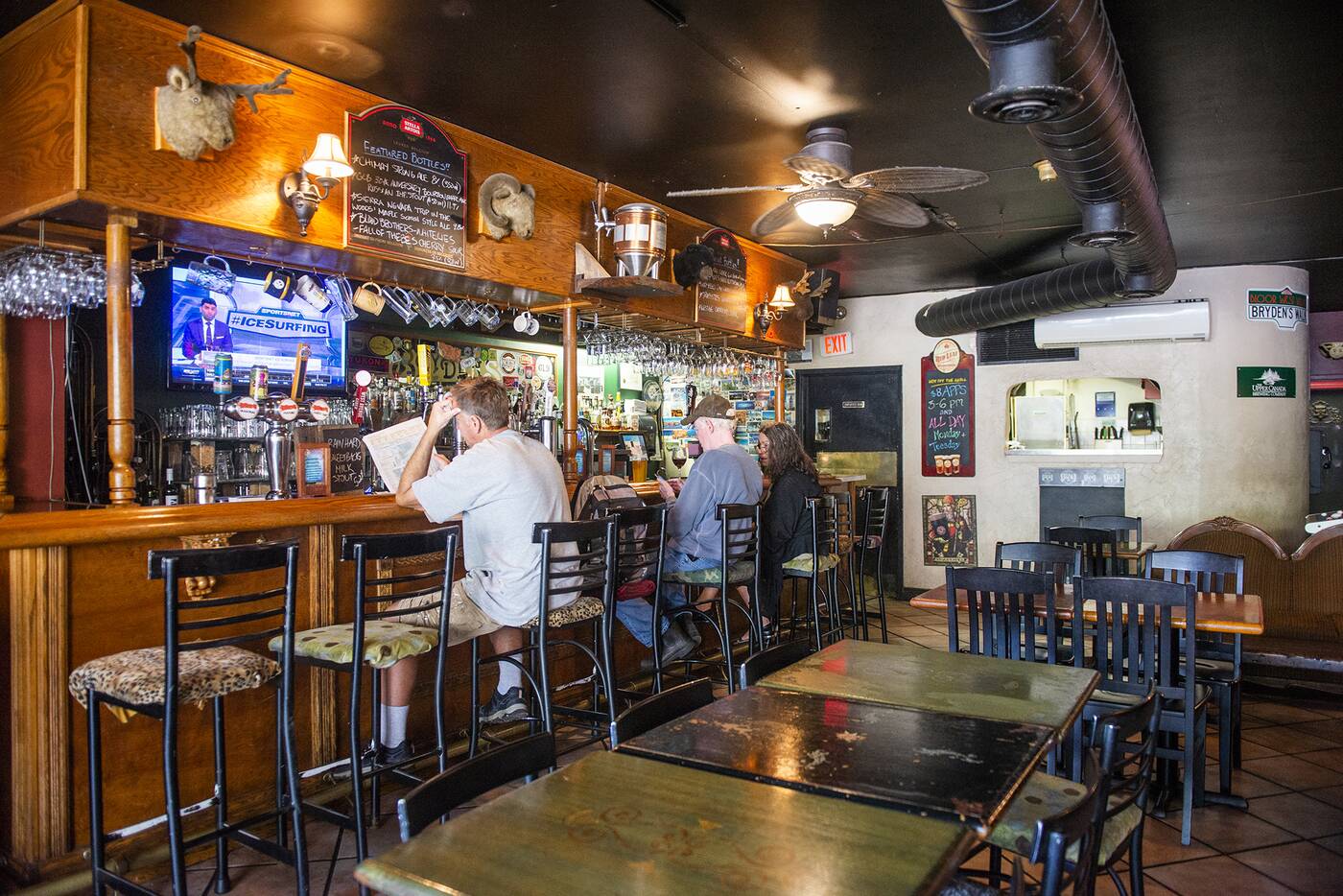 Kitschy decor is a huge part of the dim and musty atmosphere here. 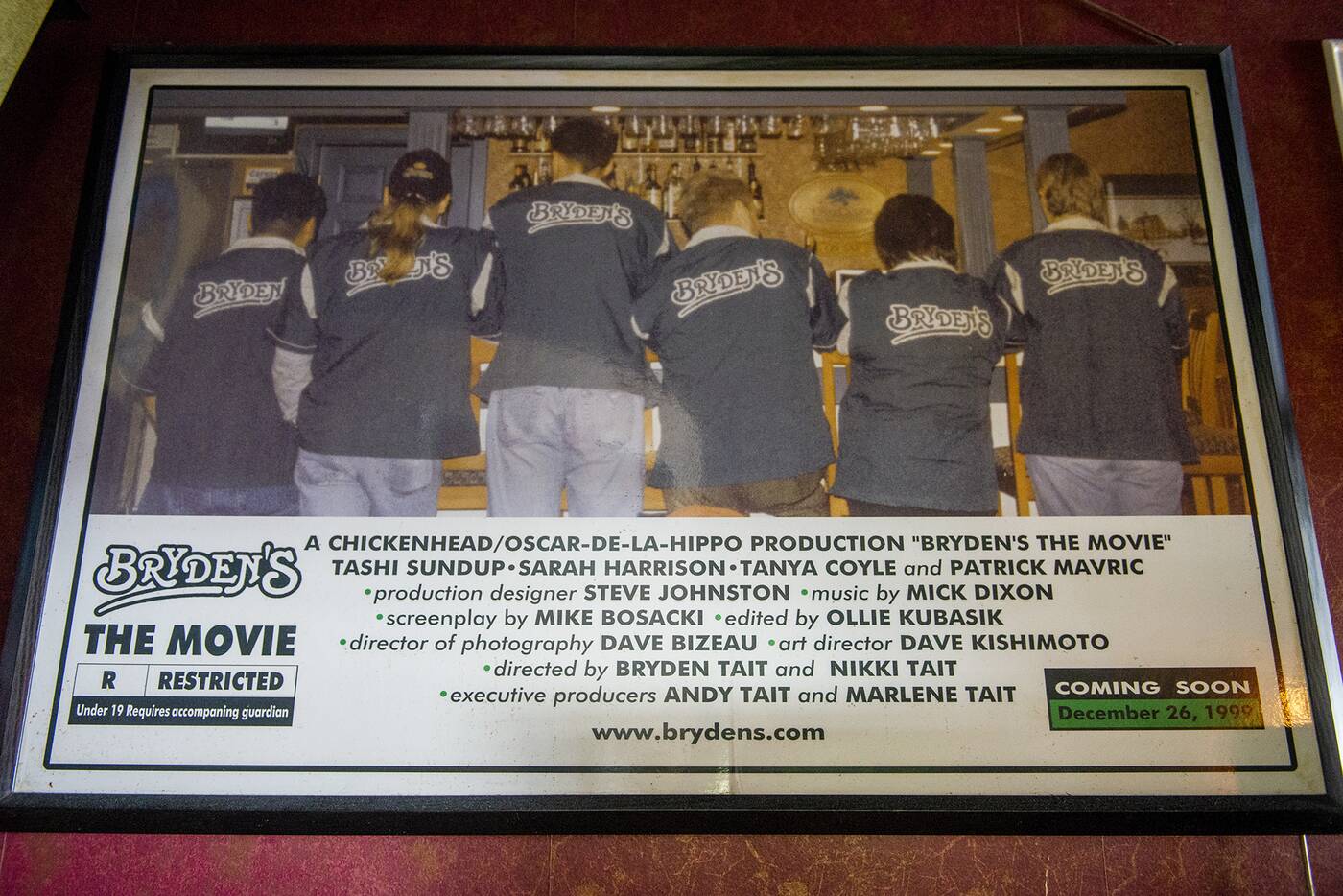 Highlights include dilapidated old chairs, a monopoly board tabletop, a non-functioning old payphone, a Golden Tee arcade game and a custom joke poster for Bryden’s: The Movie from 1999. 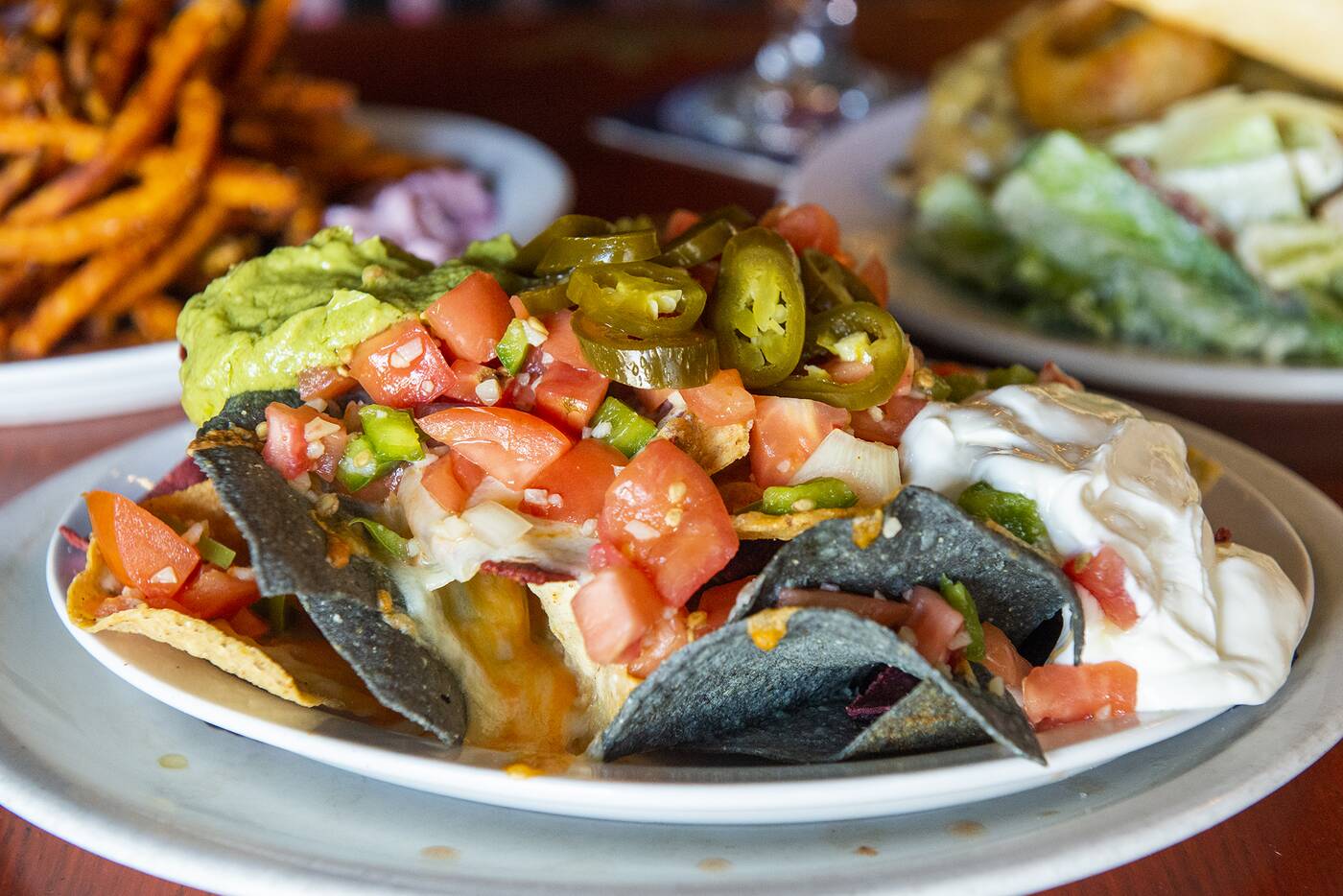 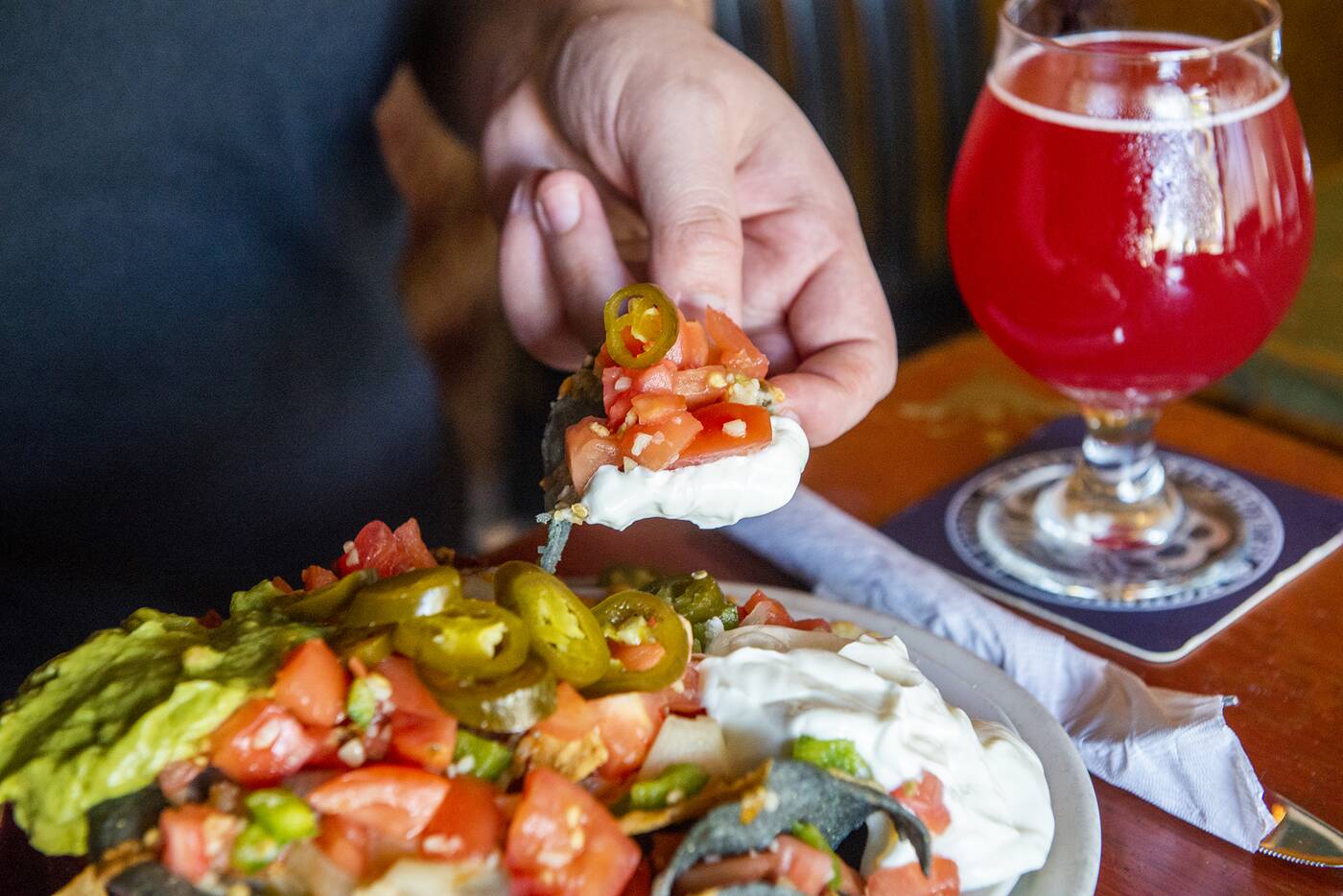 They swear their multi-coloured tortilla chips are hand-ground by Aztec priests, topped with diced tomato, jalapeno, mozzarella and cheddar, and piles of sour cream, guac and salsa. You can add blackened chicken, spiced beef or pulled pork for a $3 upcharge, or all three for $4. 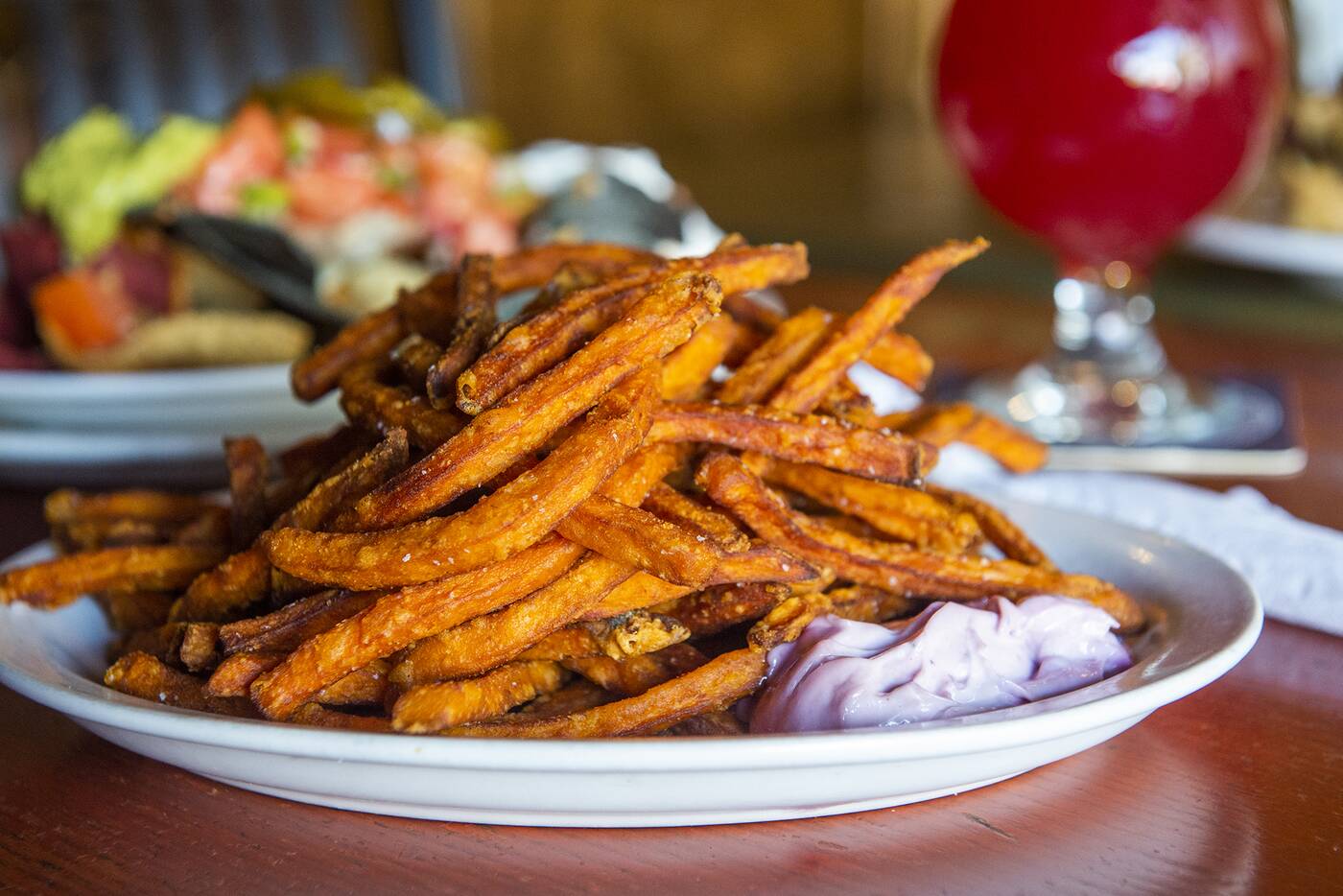 Sweet potato fries ($5.95) are expertly crispy, salty and matchstick-thin, rather than chunky and mushy as they can often be at bars. 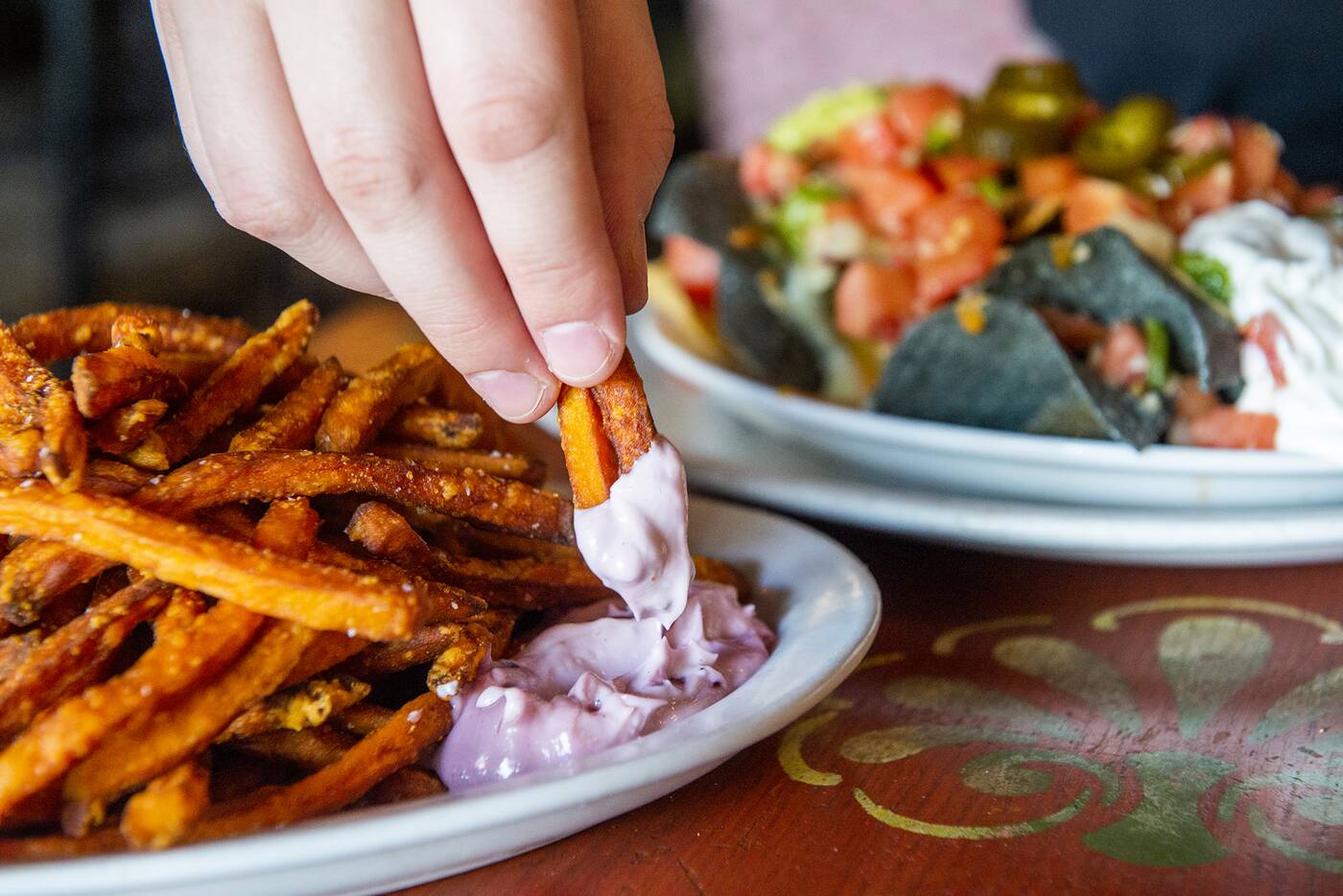 What really sets them apart, though, is a blueberry aioli, subtle but just different enough in flavour from an ordinary aioli, with a popping purple colour that just looks pretty with the bright orange fries. 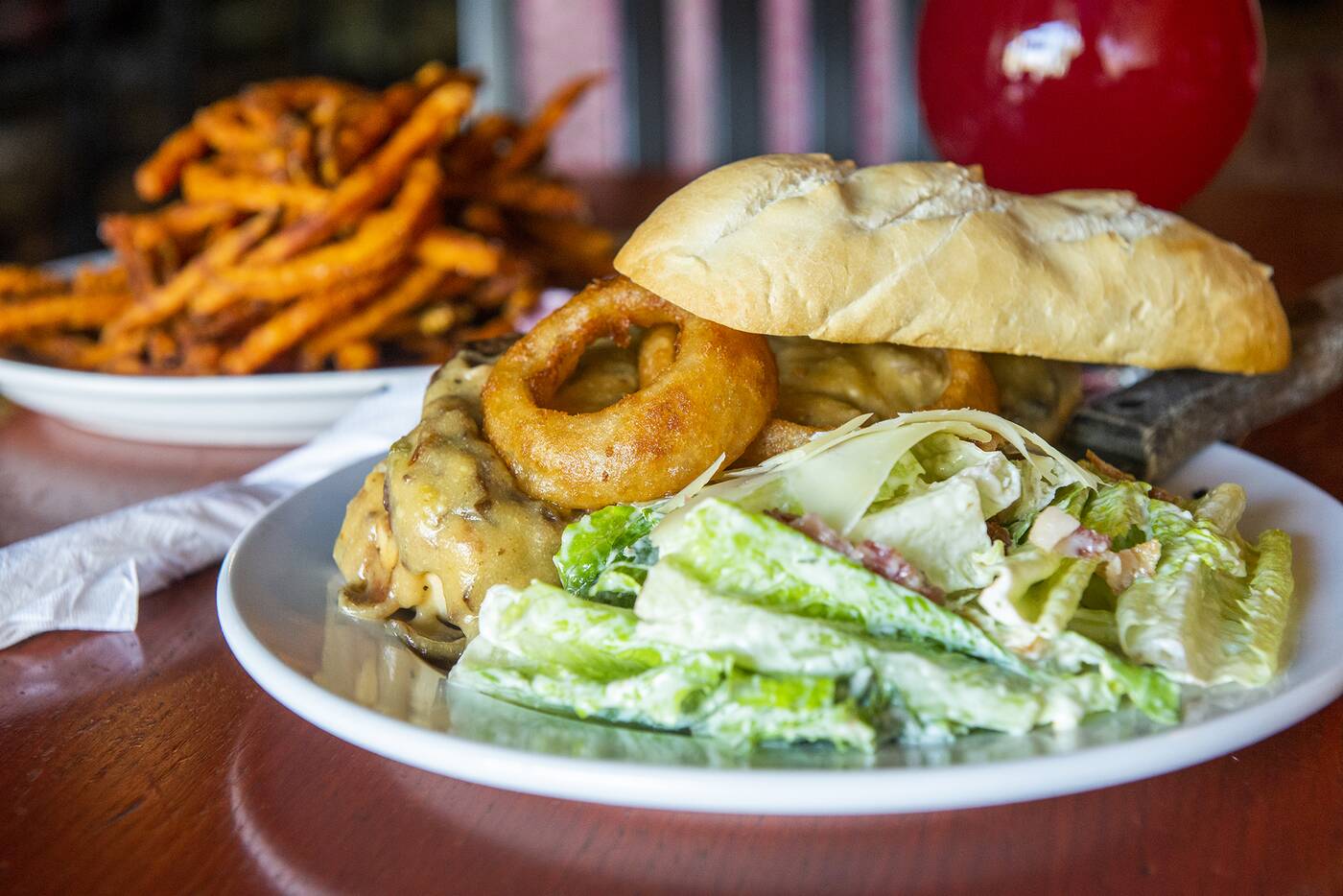 Listed on the menu as The Cheese Steak, at $15.95 this is the most expensive sandwich on the menu but it feels worth it with a thick grilled eight-ounce New York strip on a crusty toasted garlic baguette. 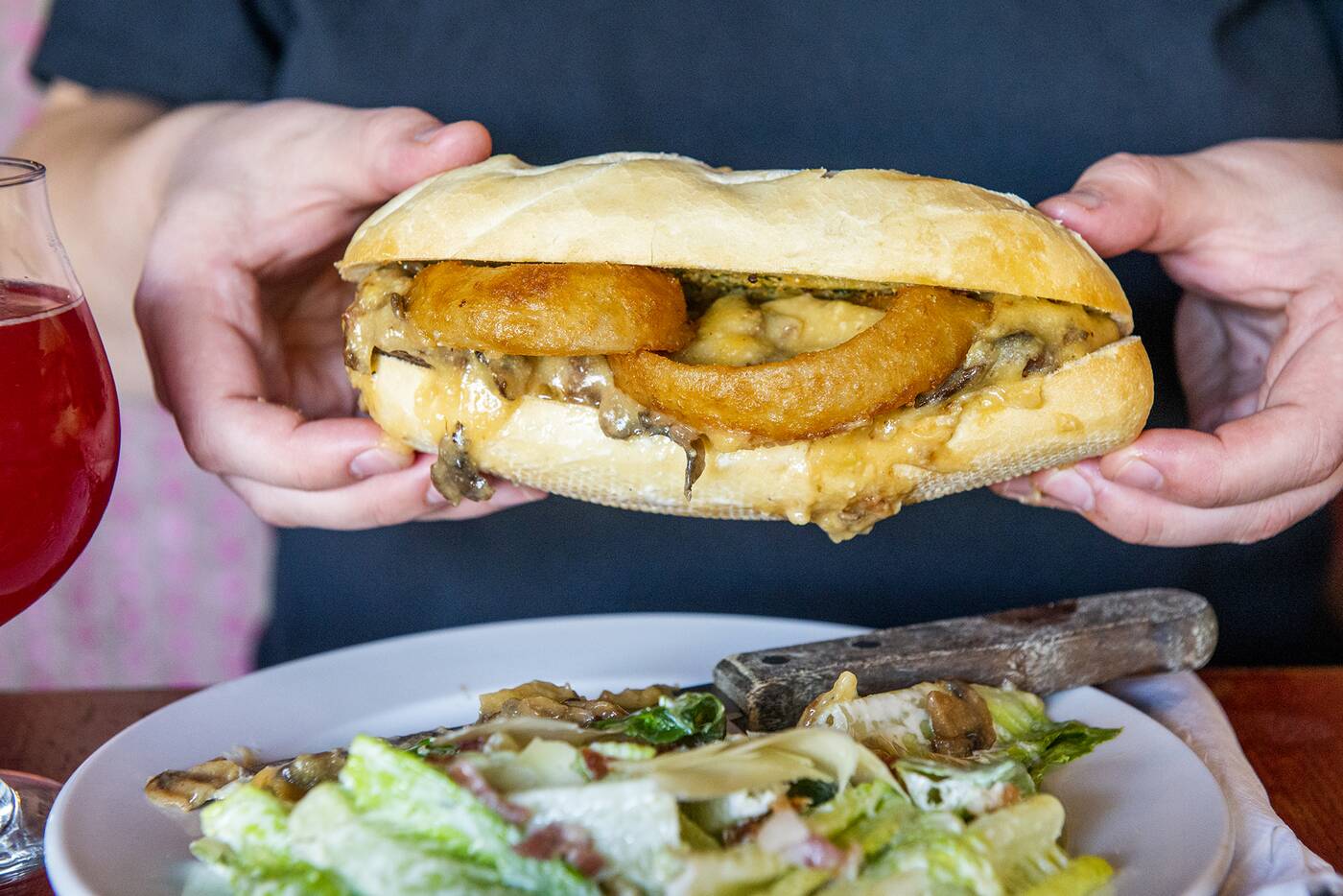 Meaty sauteed mushrooms, zesty and gooey jalapeno cheddar complete the picture. Homemade onion rings that somehow stay pretty crispy inside this sloppy sandwich push the whole thing over the edge. All sandwiches are served with fries, greens, soup or potato salad, ours with a satisfyingly heavily-dressed rendition of a Caesar salad. 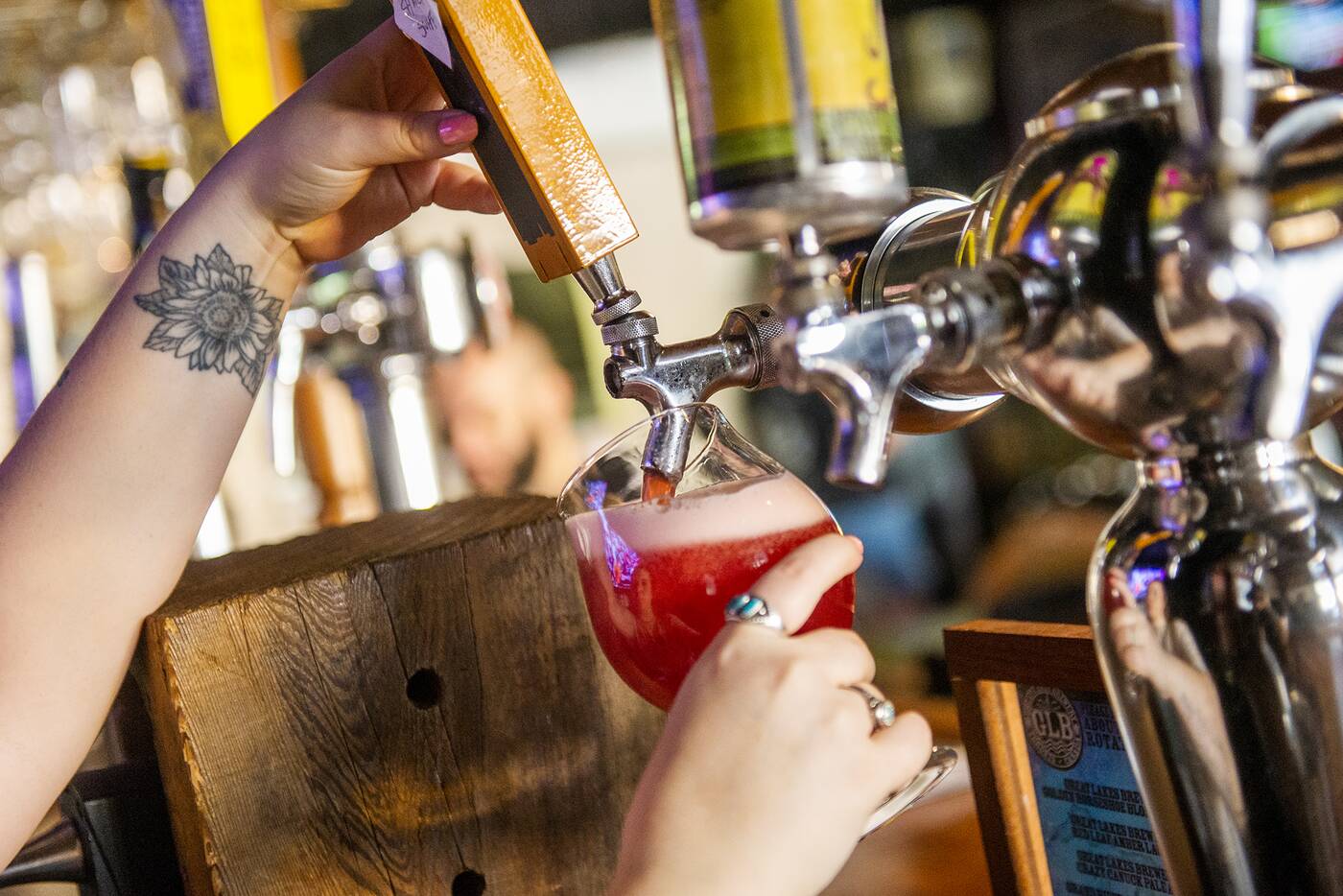 Draft beer includes relatively pedestrian options like Steamwhistle, Side Launch, Great Lakes, Beau’s and Wellington, but this place is a good source for premium imports and local craft brews. 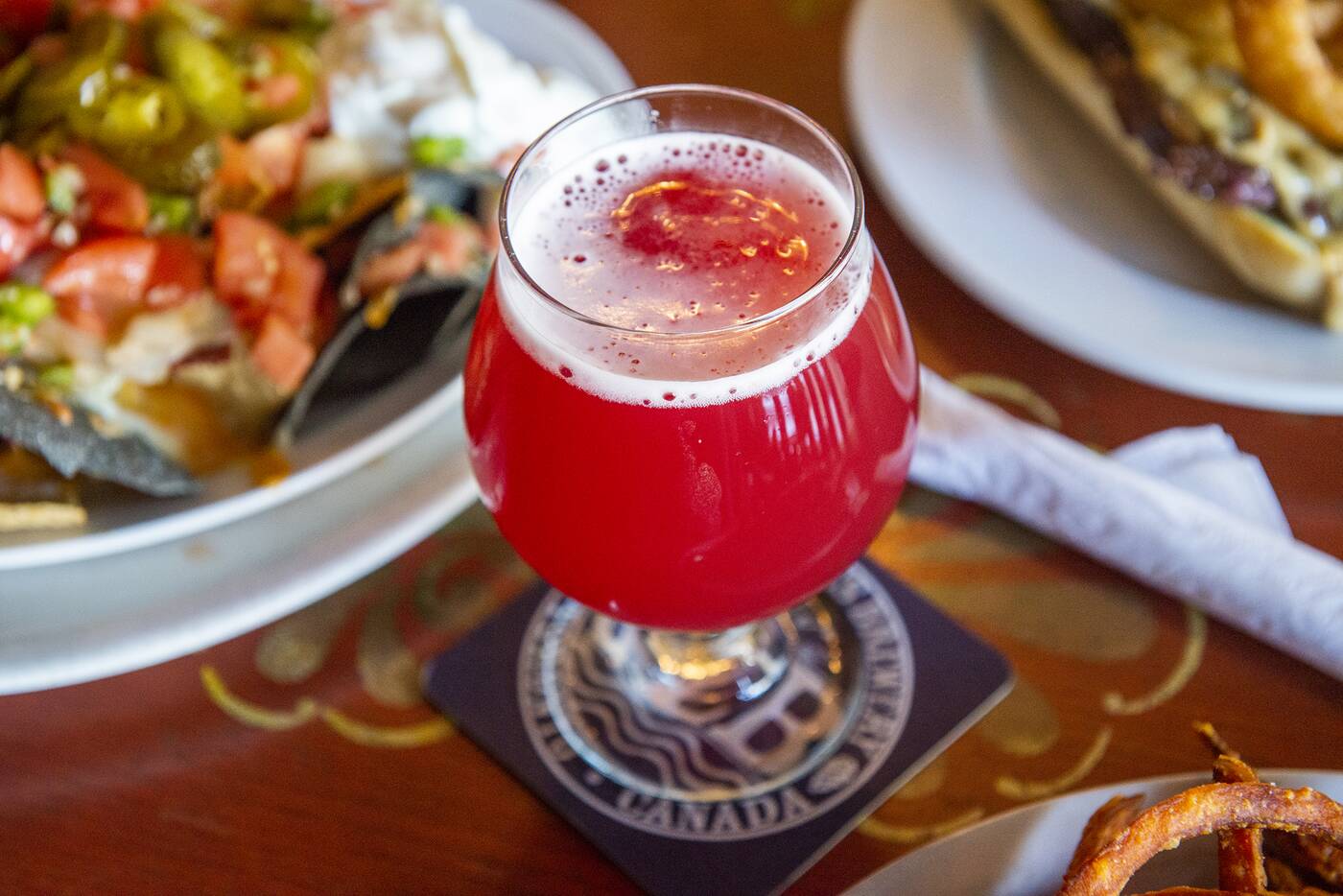 A blackcurrant sour from Shacklands ($6.64) is served in an appropriate tulip glass that cups the fruity, floral aromas of the beer and cleanly delivers its tangy acidity. 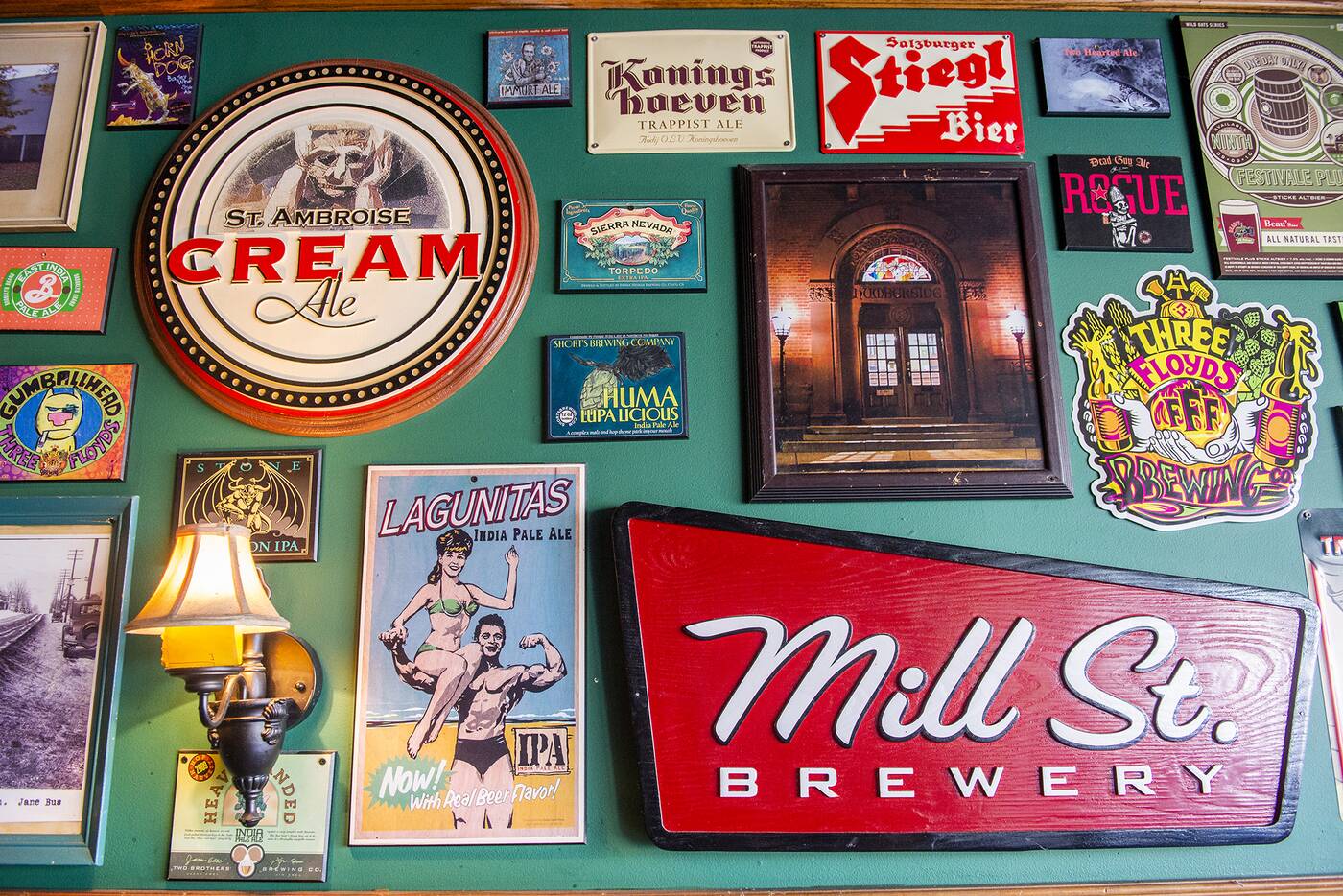 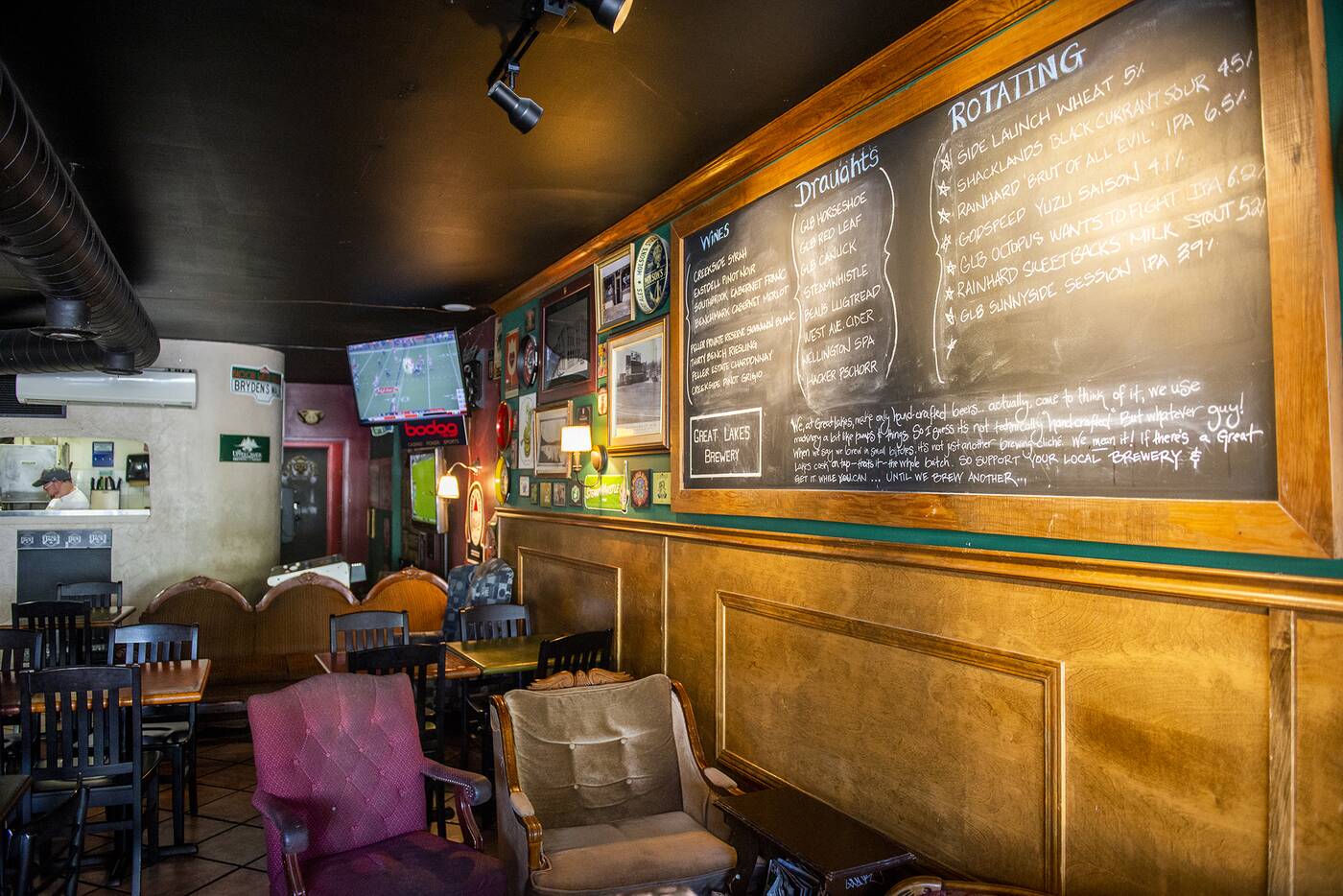 The place is named for owner Bryden Tait, seen on the retro Bryden’s movie poster with some of the co-owners that still operate the bar to this day. 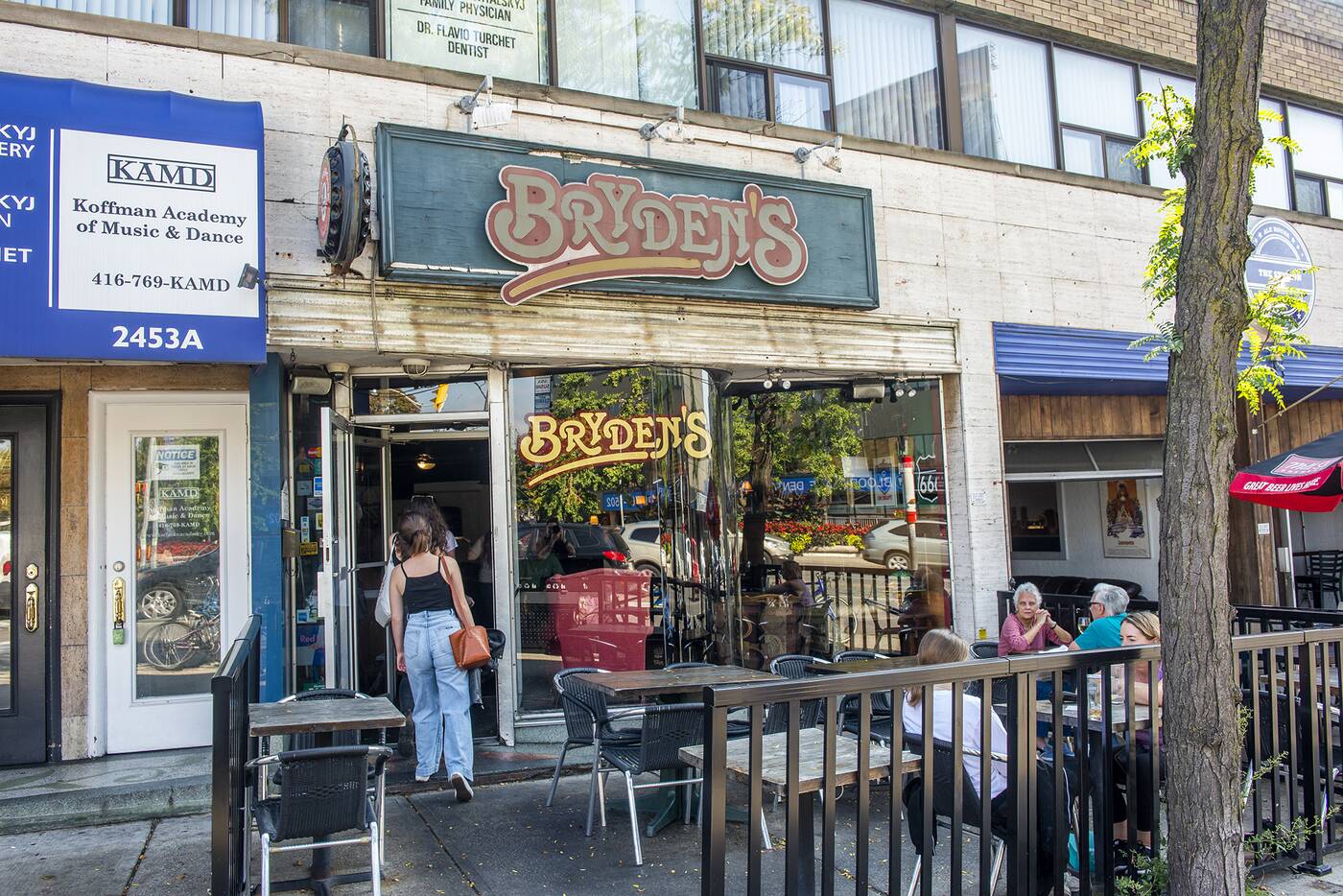