Bacan is slang for "sweet" or "awesome," and the name of this restaurant serving Argentinian cuisine.

It comes to us from the same mastermind behind the Queen Arepa food truck, the menu divided into hot and cold plates. 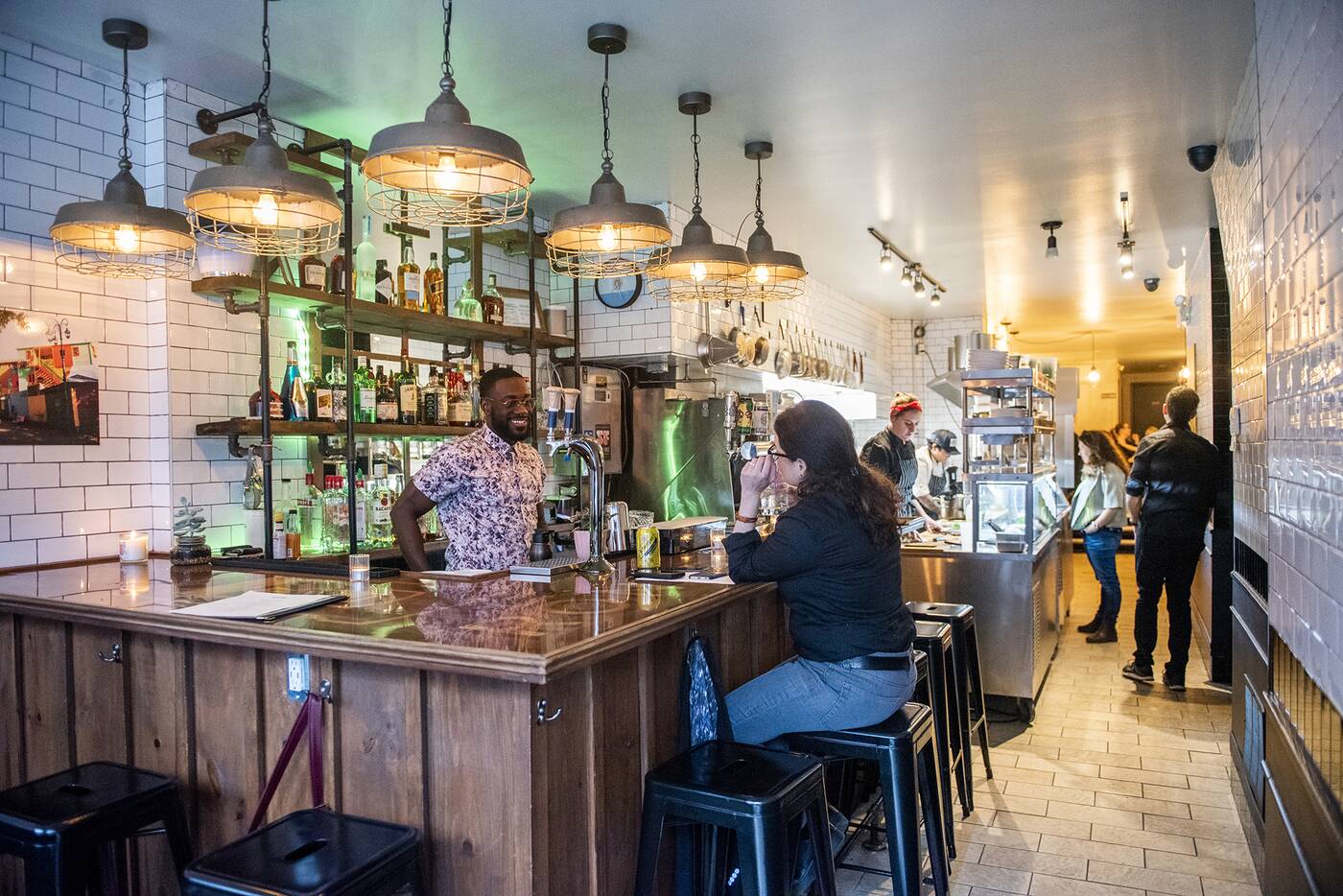 Bacan takes over the space left behind by an outpost of burger chain BQM, a tight front area taken up by a steamy open kitchen, bar area, and front window seating with a window that opens fully to the street. The 64-seat restaurant opens up more towards the back. 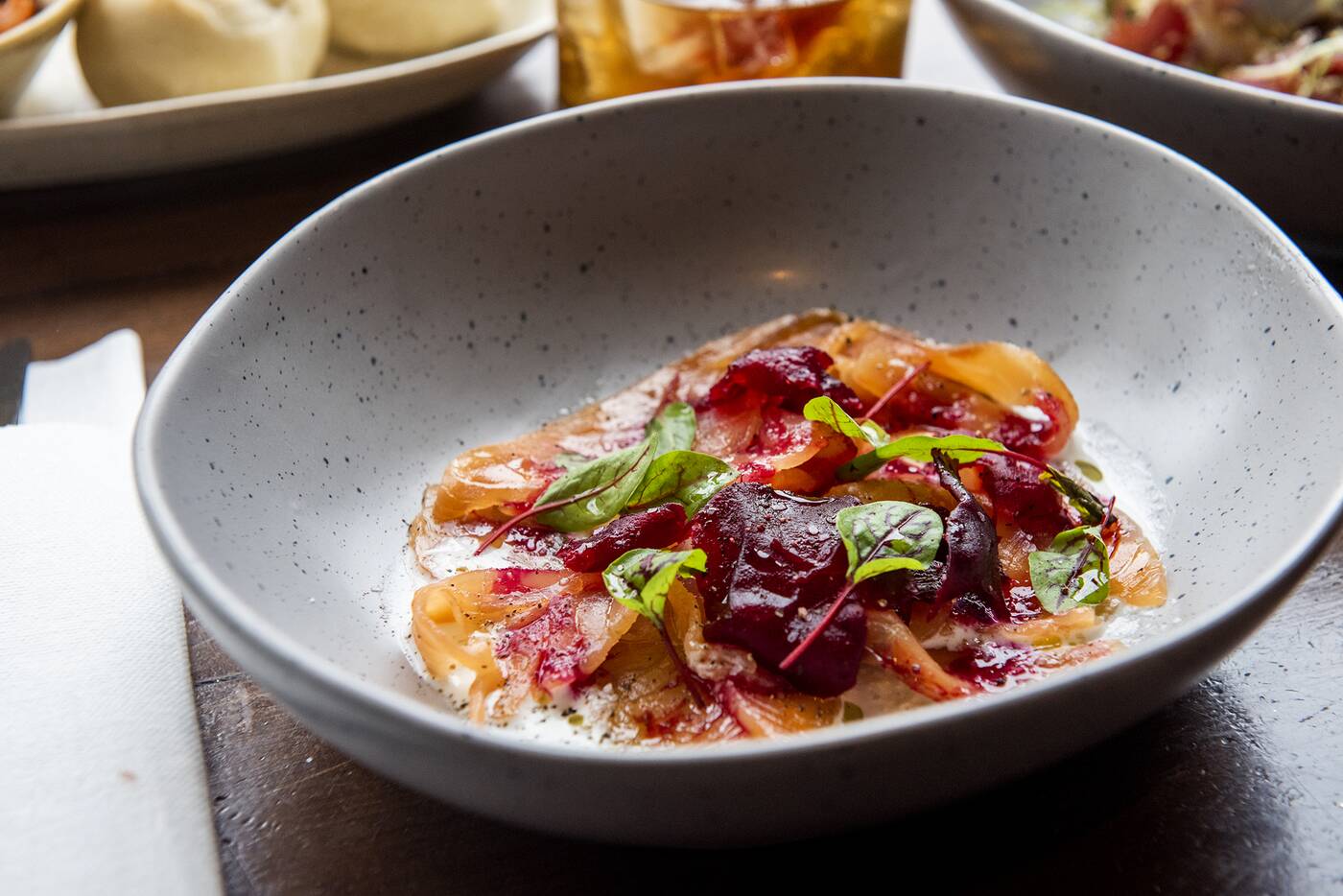 A cured salmon and beet dish ($15.50) is one of the cold plates or raciones frias. Rich salmon is cured in salt and sugar over the course of several days, and beets are cooked overnight in embers and ashes using an Argentinian technique called rescoldo, both sliced thin and served with horseradish cream, beet reduction and sorrel leaves. 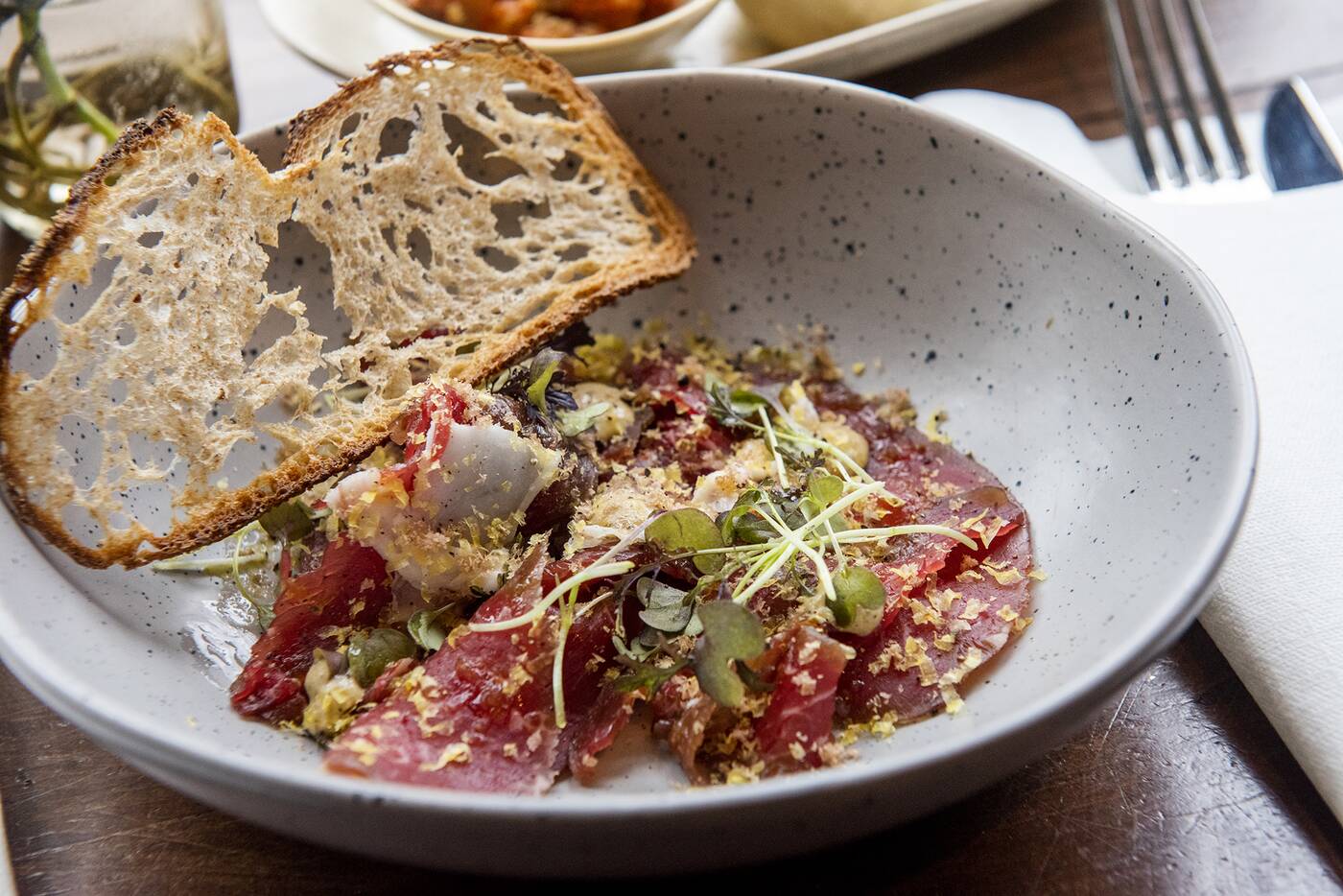 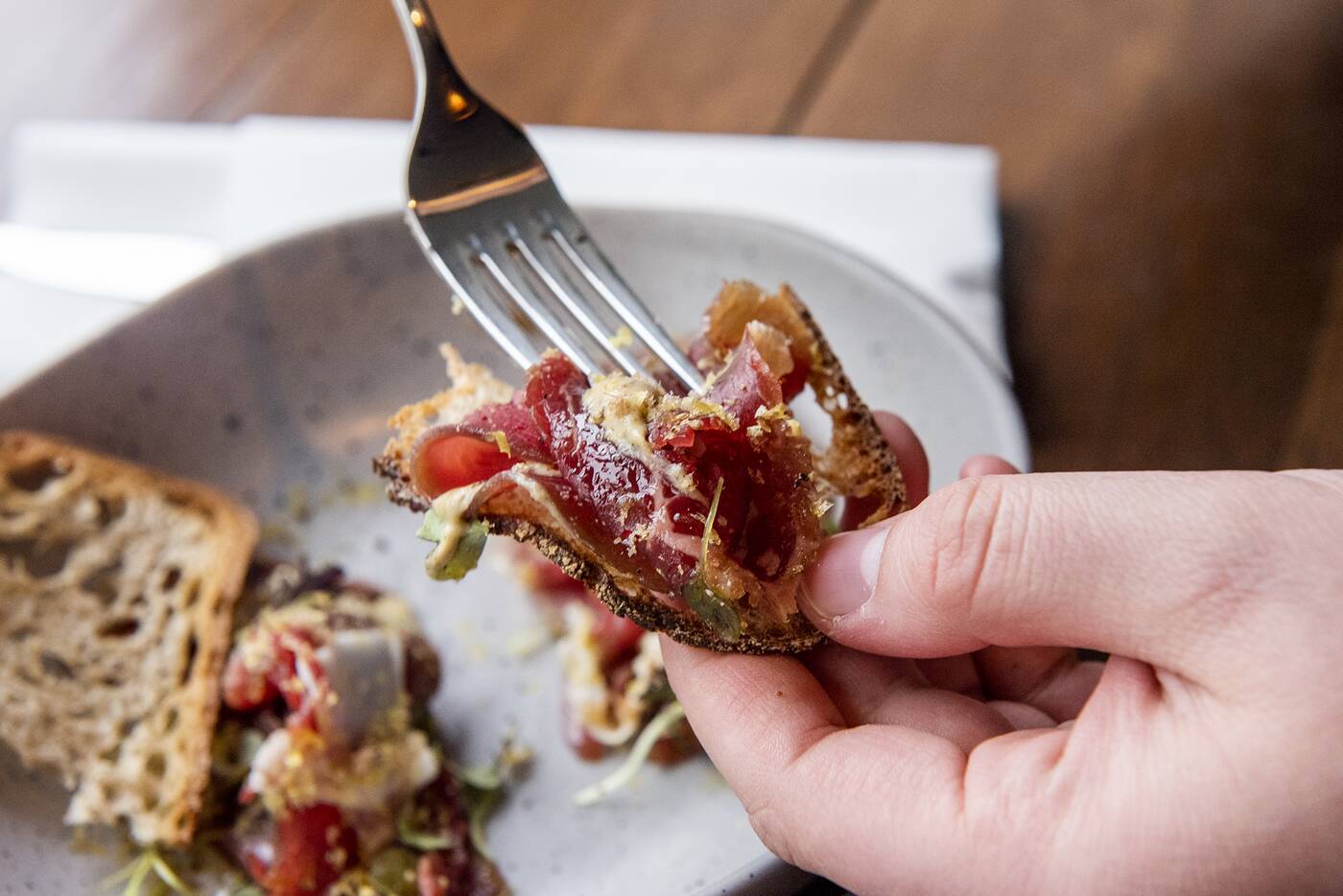 It's served with bone marrow egg yolk cream and a thin crisp of sourdough, shaved egg yolk on top. 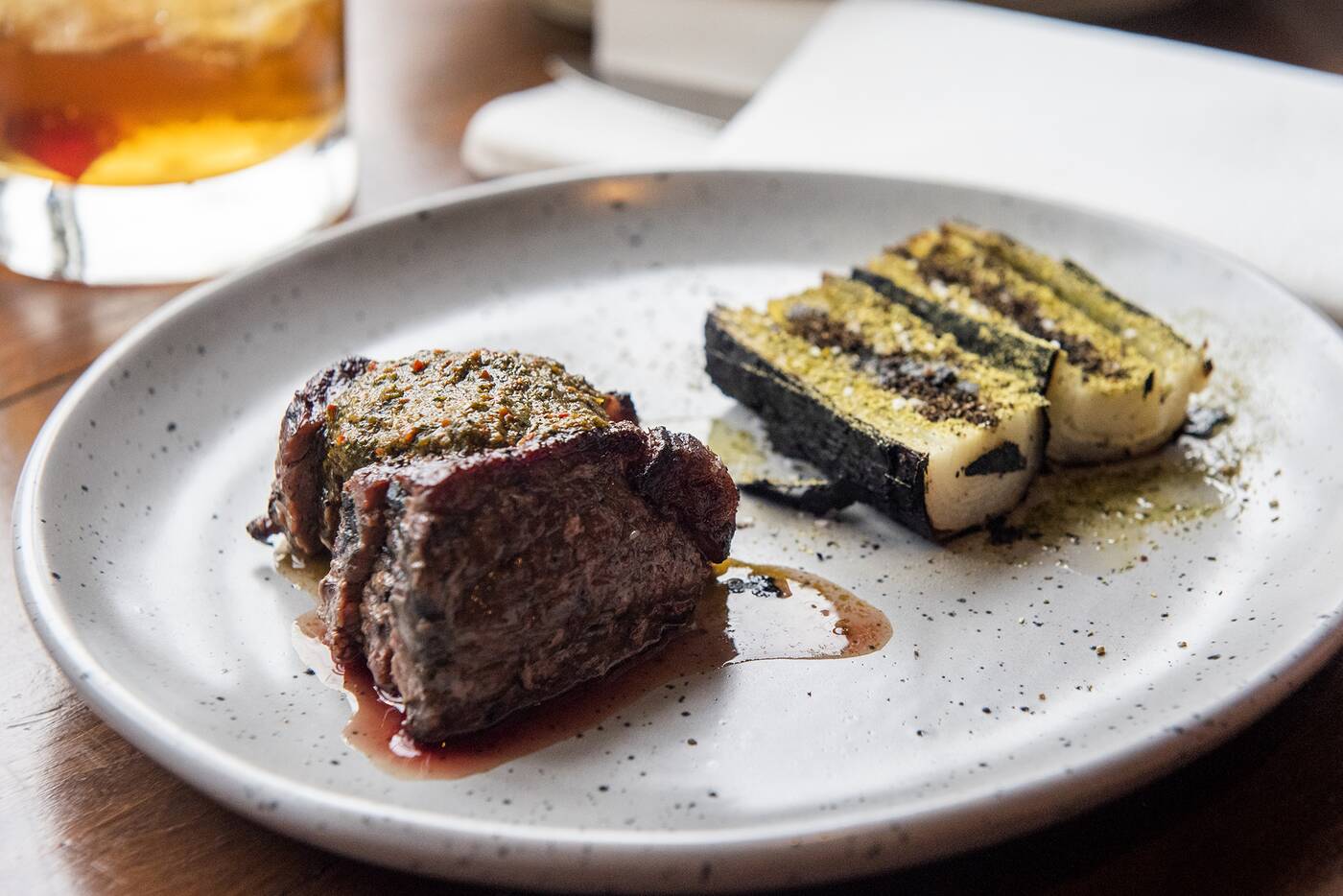 Picana ($18) is part of a selection of Konro grilled meats from the raciones calientes section of the menu, the Konro a type of grill that allows food to get close to the coals. 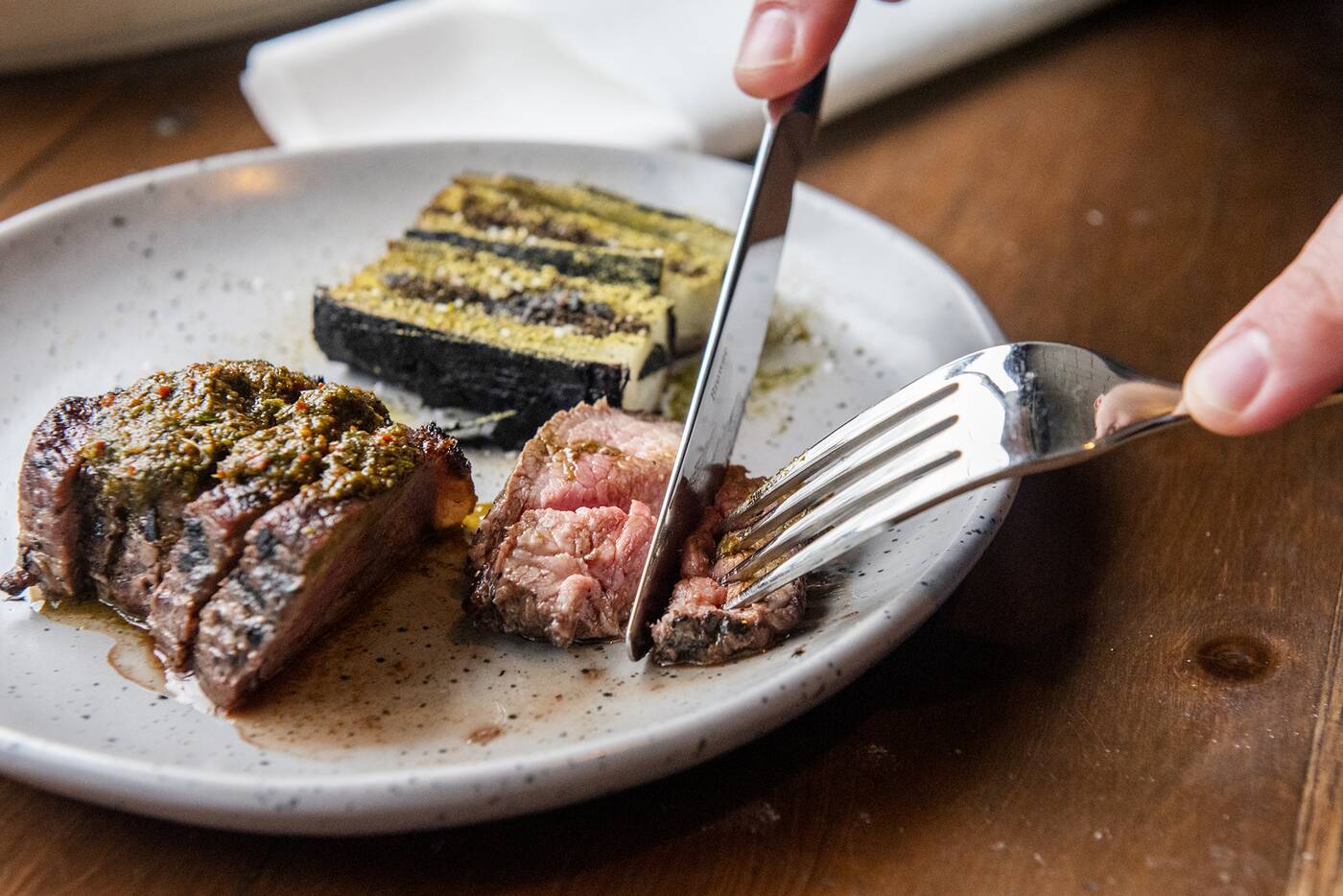 The tiny cut of meat is packed with flavour that's further enhanced by an intense chimichurri of parsley, garlic, oregano, red pepper and pepper flakes that's more dry and zesty than green and wet, like some.

It's accompanied by rescoldo leeks that are layered with flavour, decorated with a little leek ash and bright green dehydrated leek. 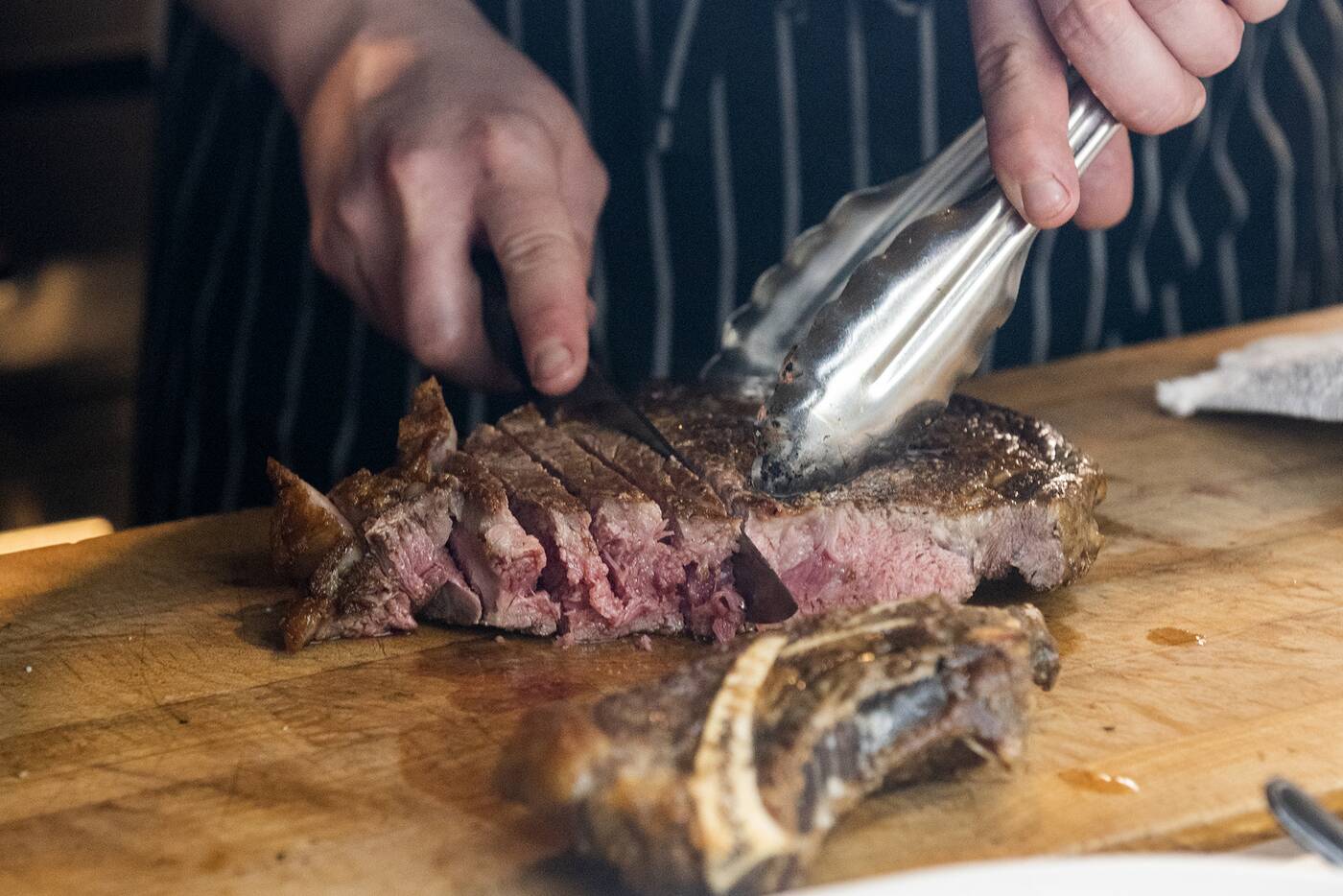 A 30-ounce rib eye steak ($50) is the big ticket item here, grilled before being finished in a cast iron pan in the oven. 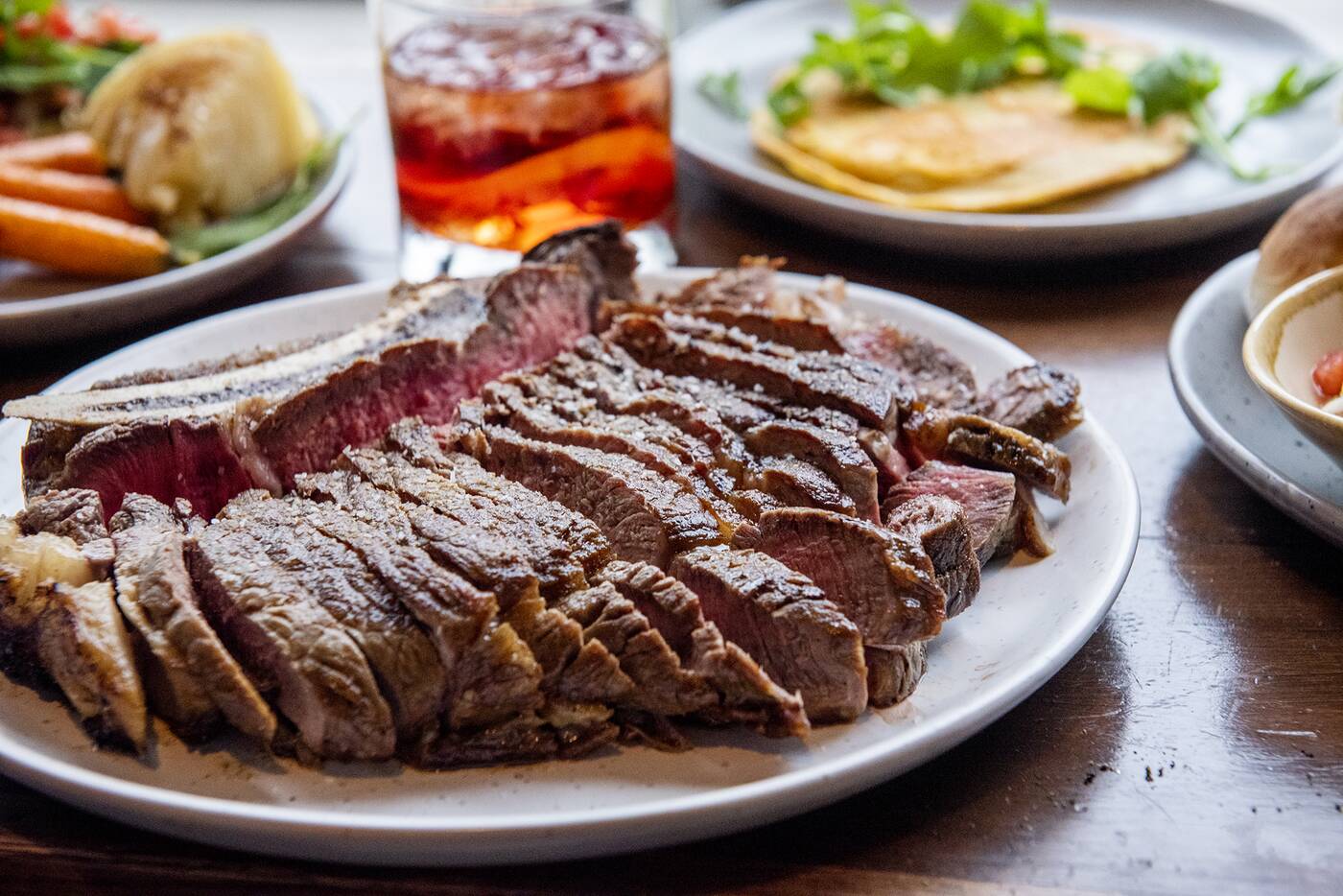 Seasoned with salt alone, meats in Argentina are typically unaged. 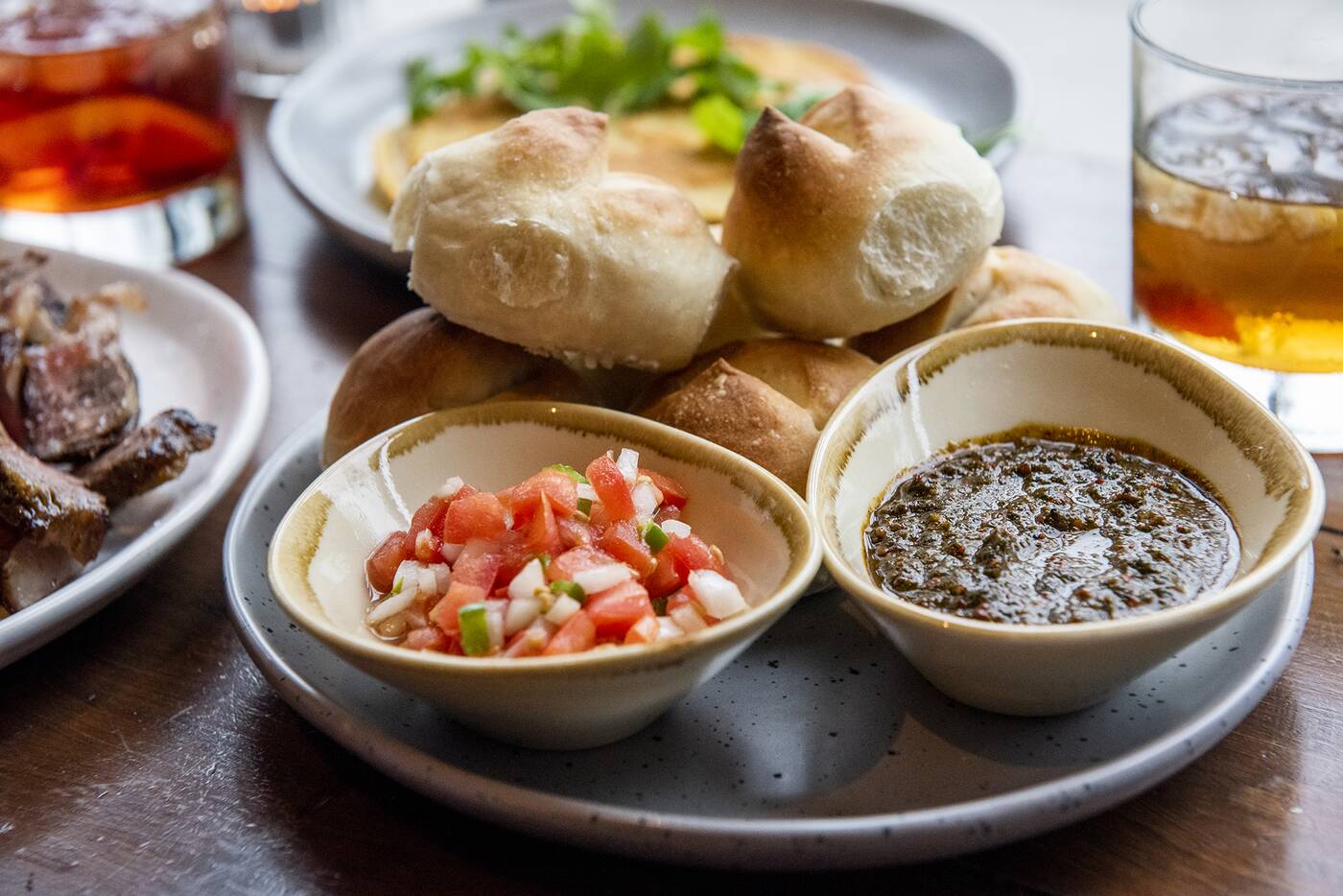 Served with the bone in, the full-flavoured steak is accompanied by a salsa criolla, chimichurri and house bread. 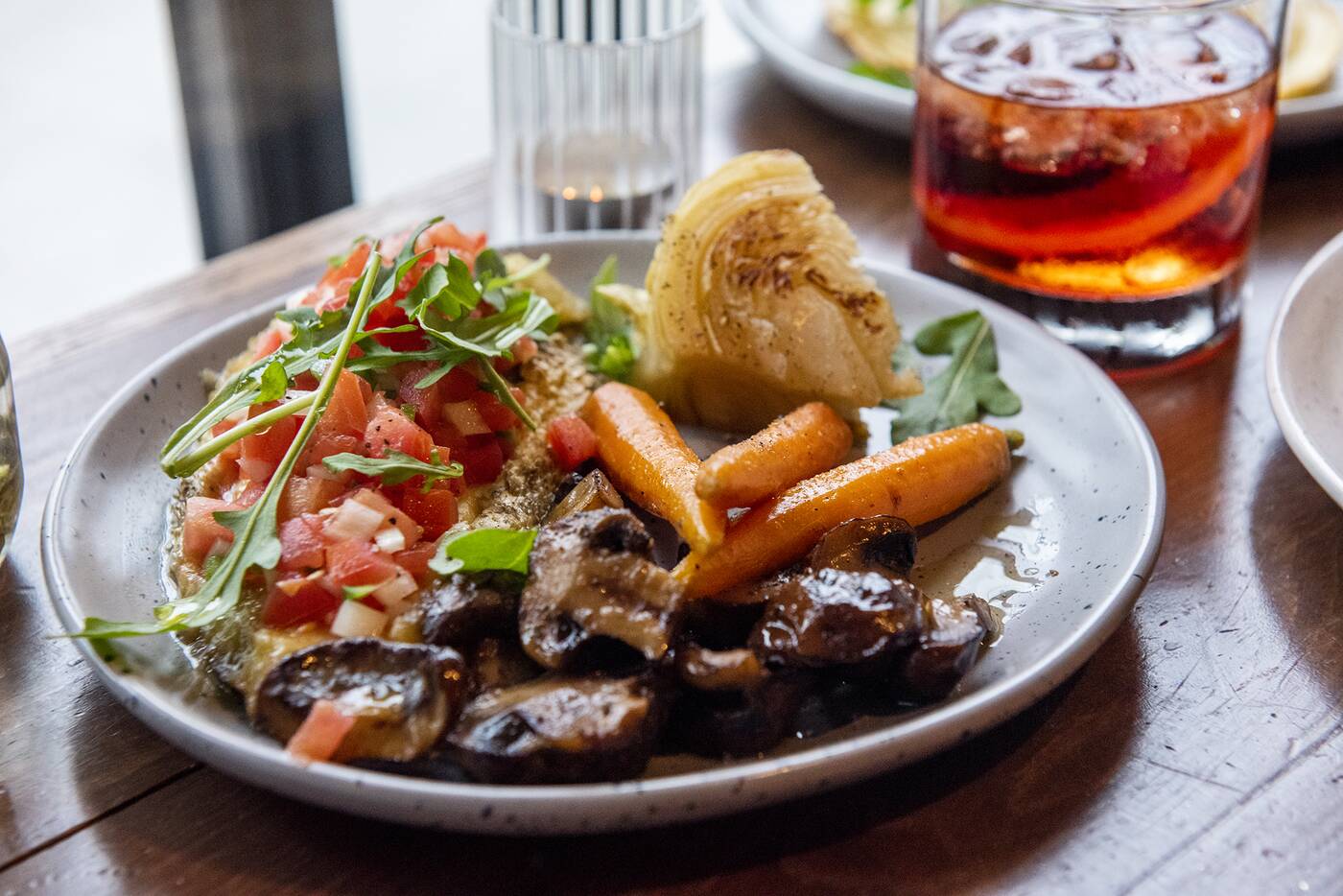 Rescoldo eggplant, a sweetly dense faina or chickpea pancake and peppery carrot, onion and mushroom are also served on the side. 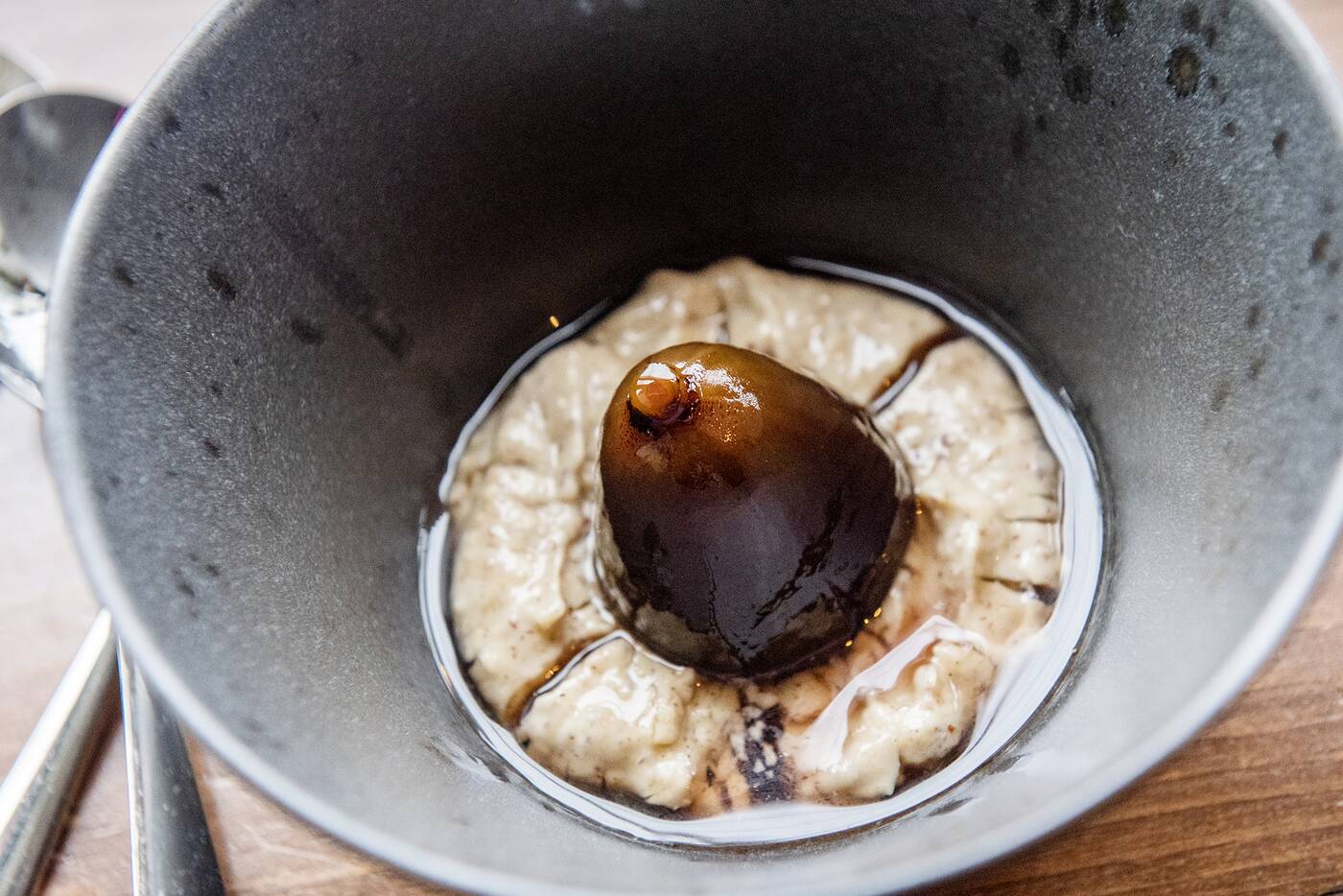 Candied stuffed fig ($9) makes for an unusual dessert, a fig stuffed with dates and almonds and surrounded by a carob almond "pastry" that brings a chocolatey element. 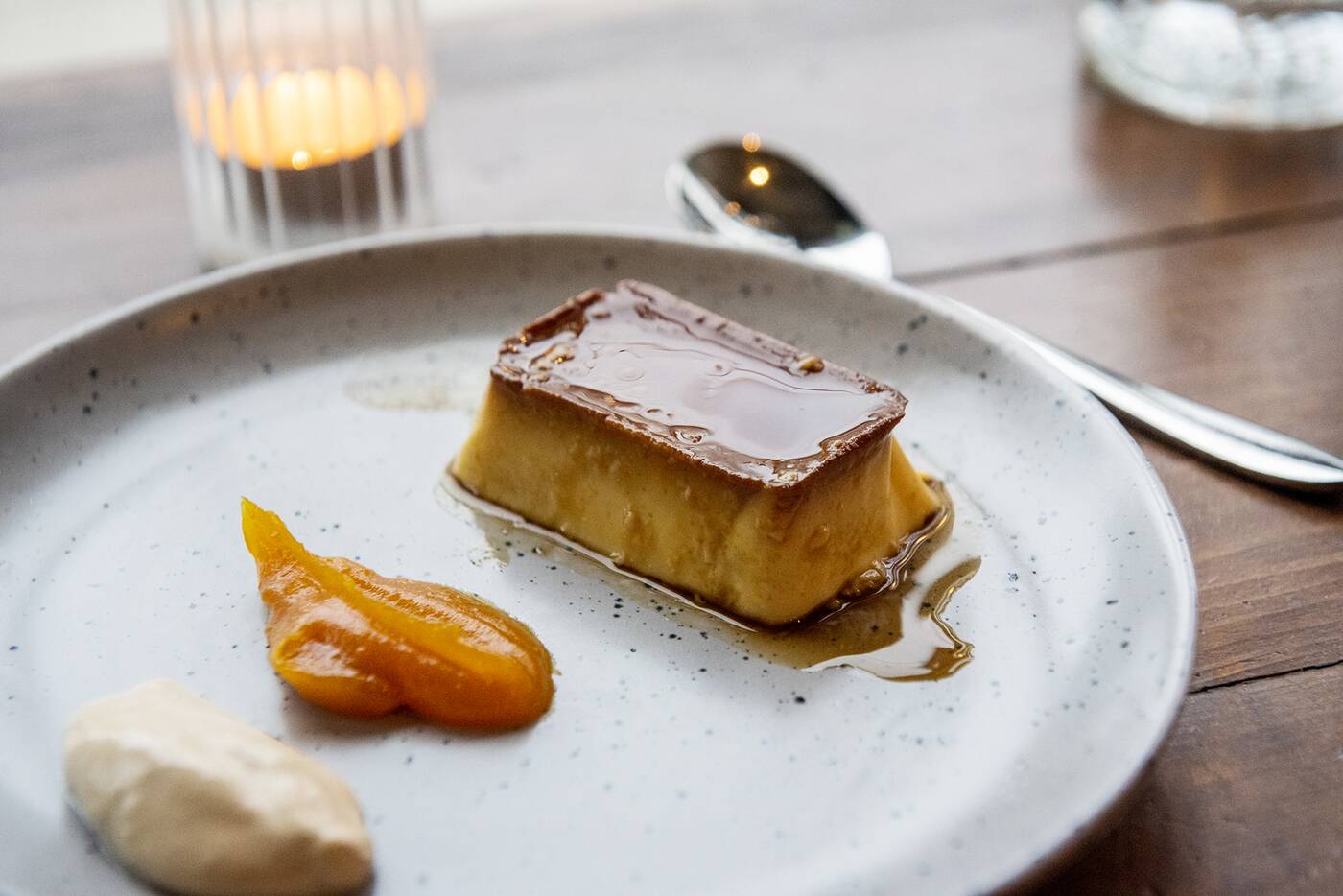 Flan ($8) is more of a crowd-pleaser, creamy and custardy served with a delicious roasted pumpkin puree and coco sugar whipped cream. 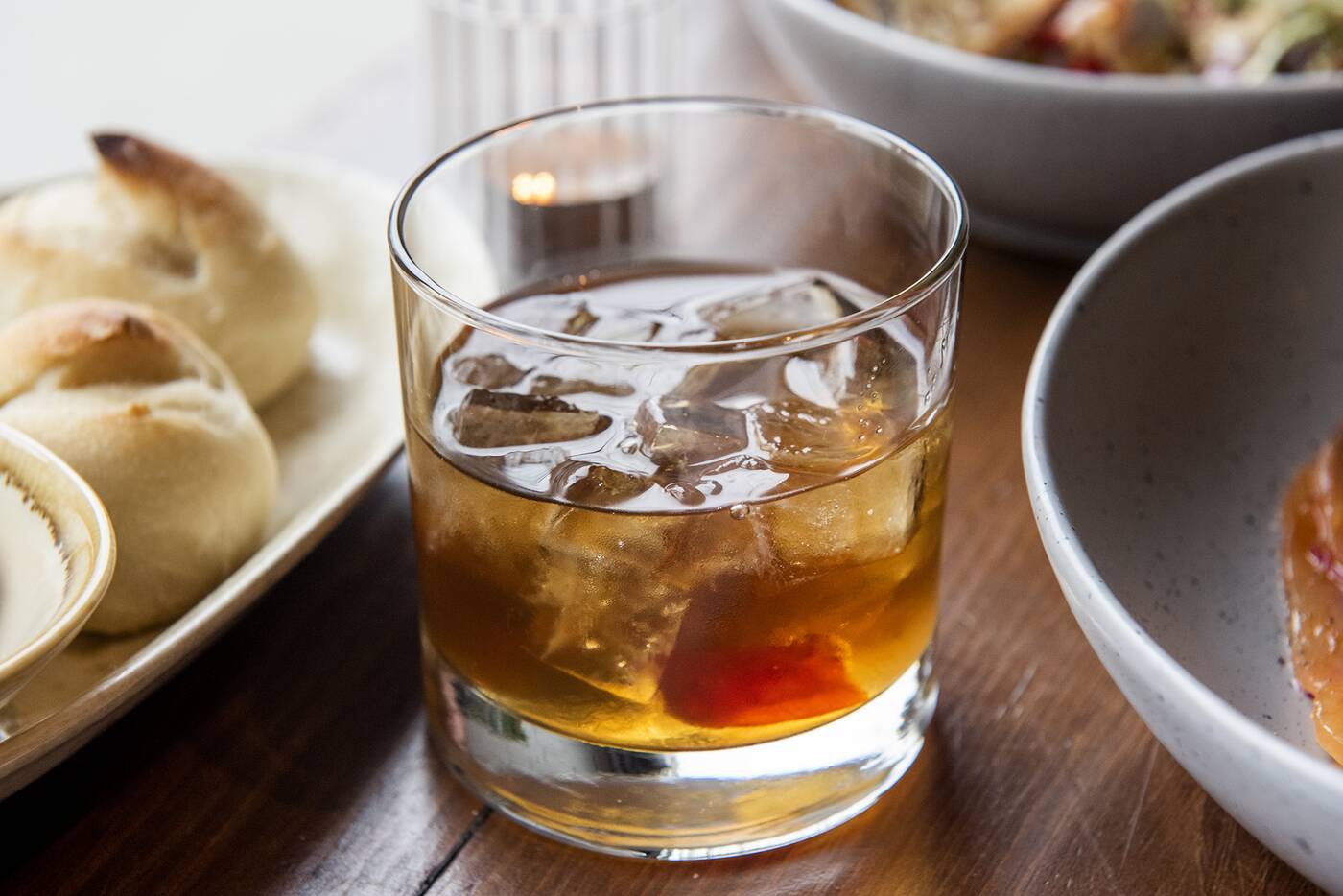 A Bacan Old Fashioned ($13) combines bourbon with blueberry bitters and raw sugar and garnishes with a candy kumquat, though all these flavours are relatively subtle. 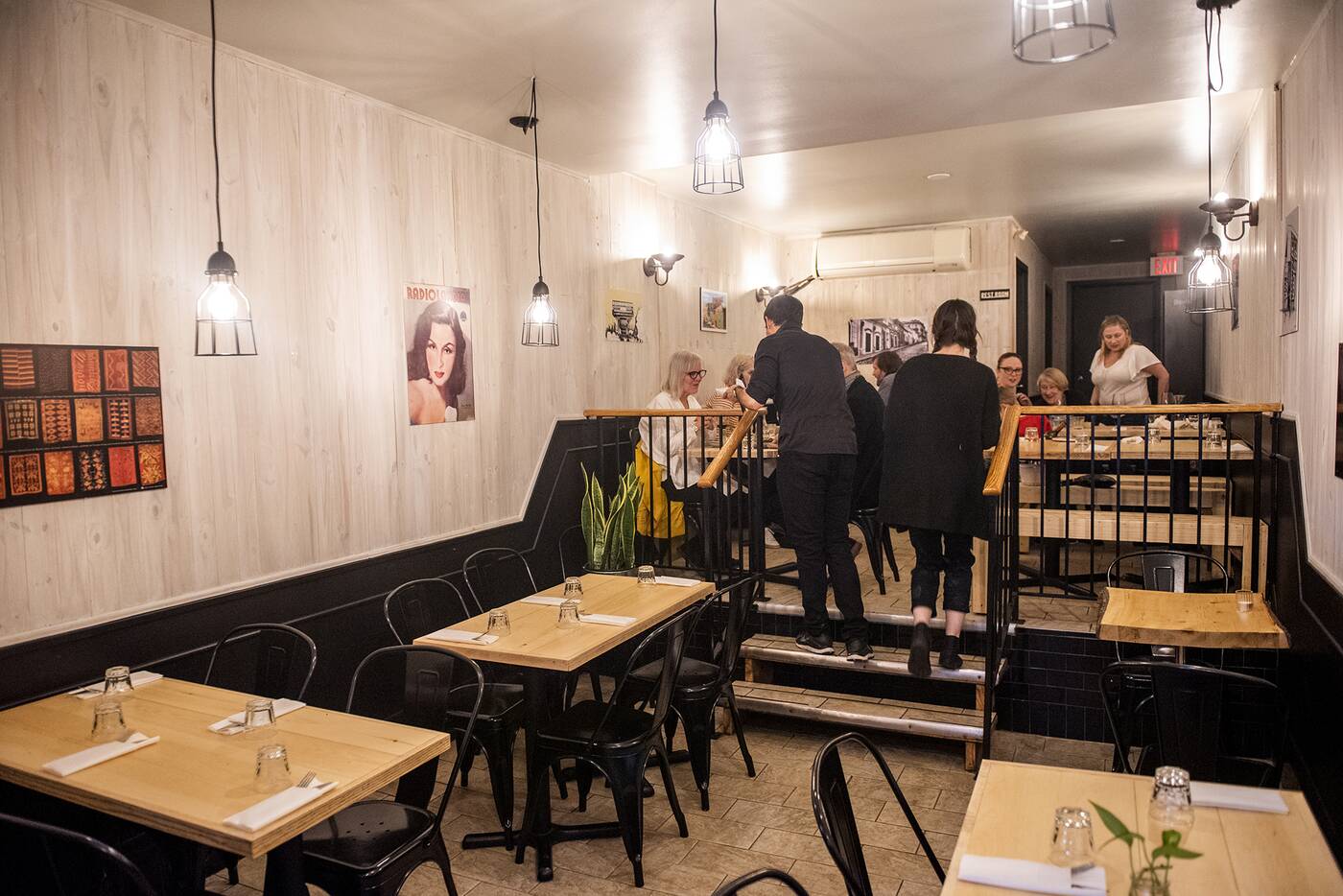 A seven-seat patio opens up out front in summer. 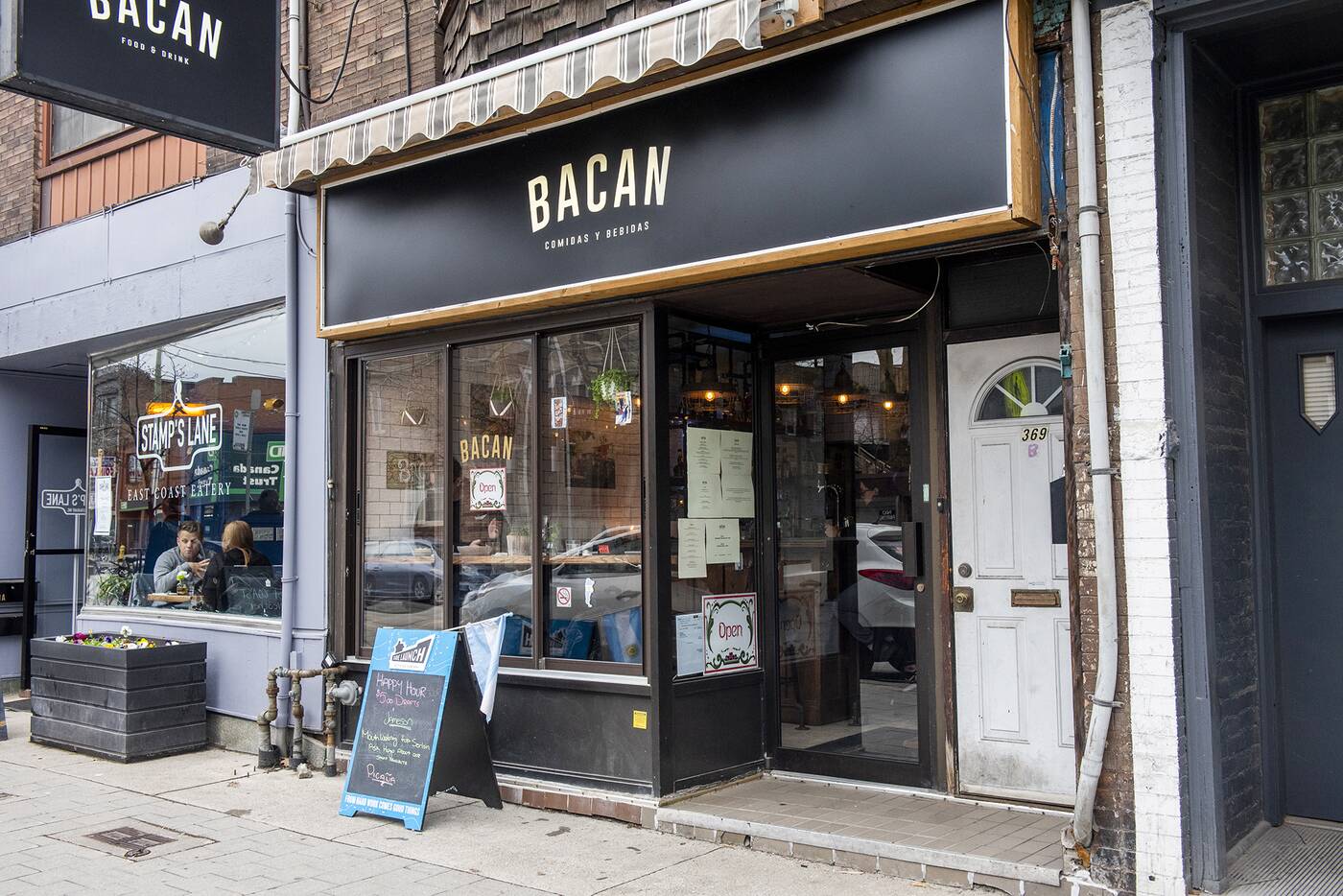