Aniq is a rough acronym for Asian Influence and Quality.

The restaurant in Roncesvalles Village that took the place of jazz bar Gate 403 serves East Asian small sharing plates with a focus on China, Japan and Korea. 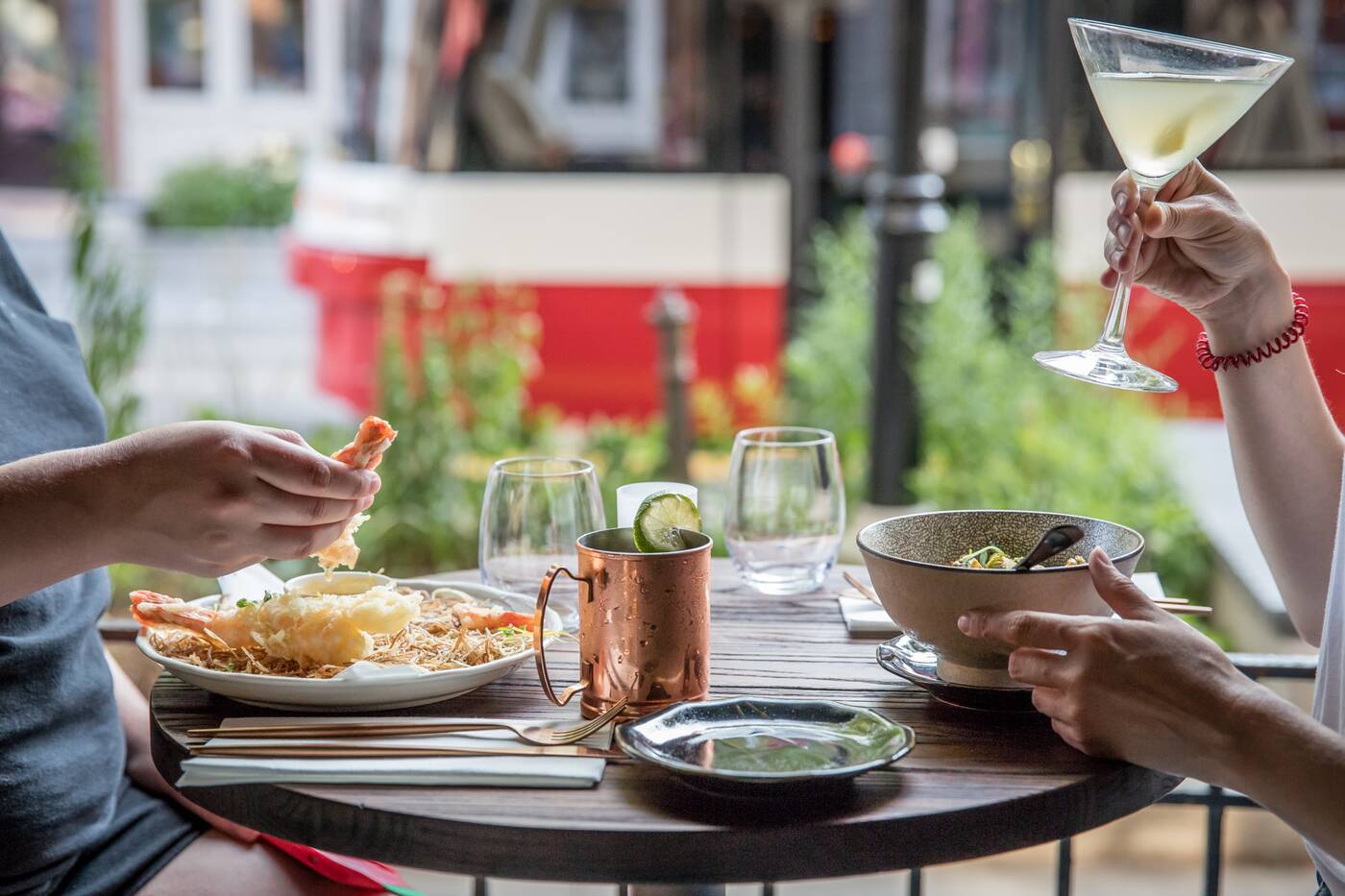 The dark little bar has come into its own with wide front windows that open to the street, creating an almost patio-like effect. 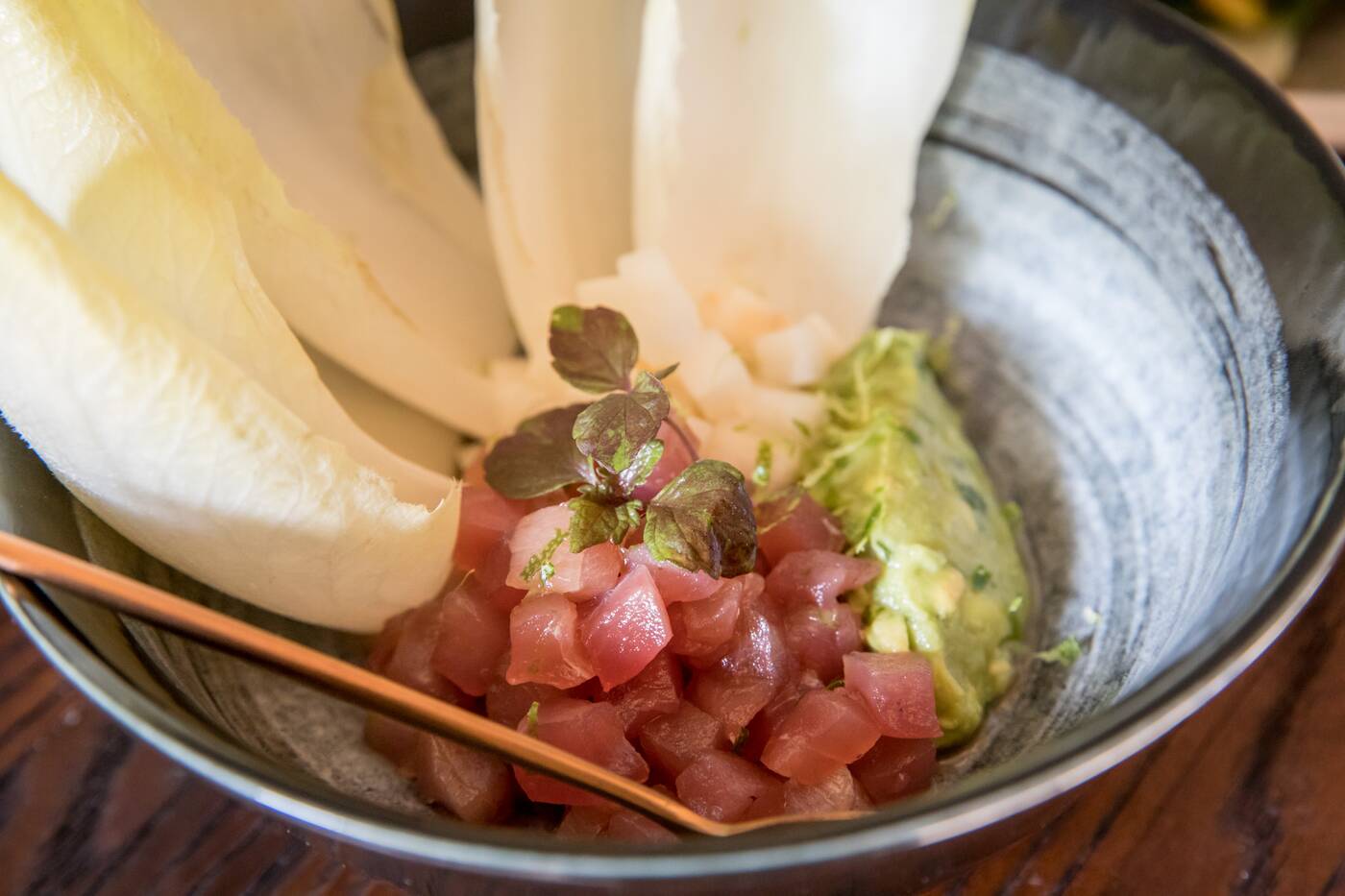 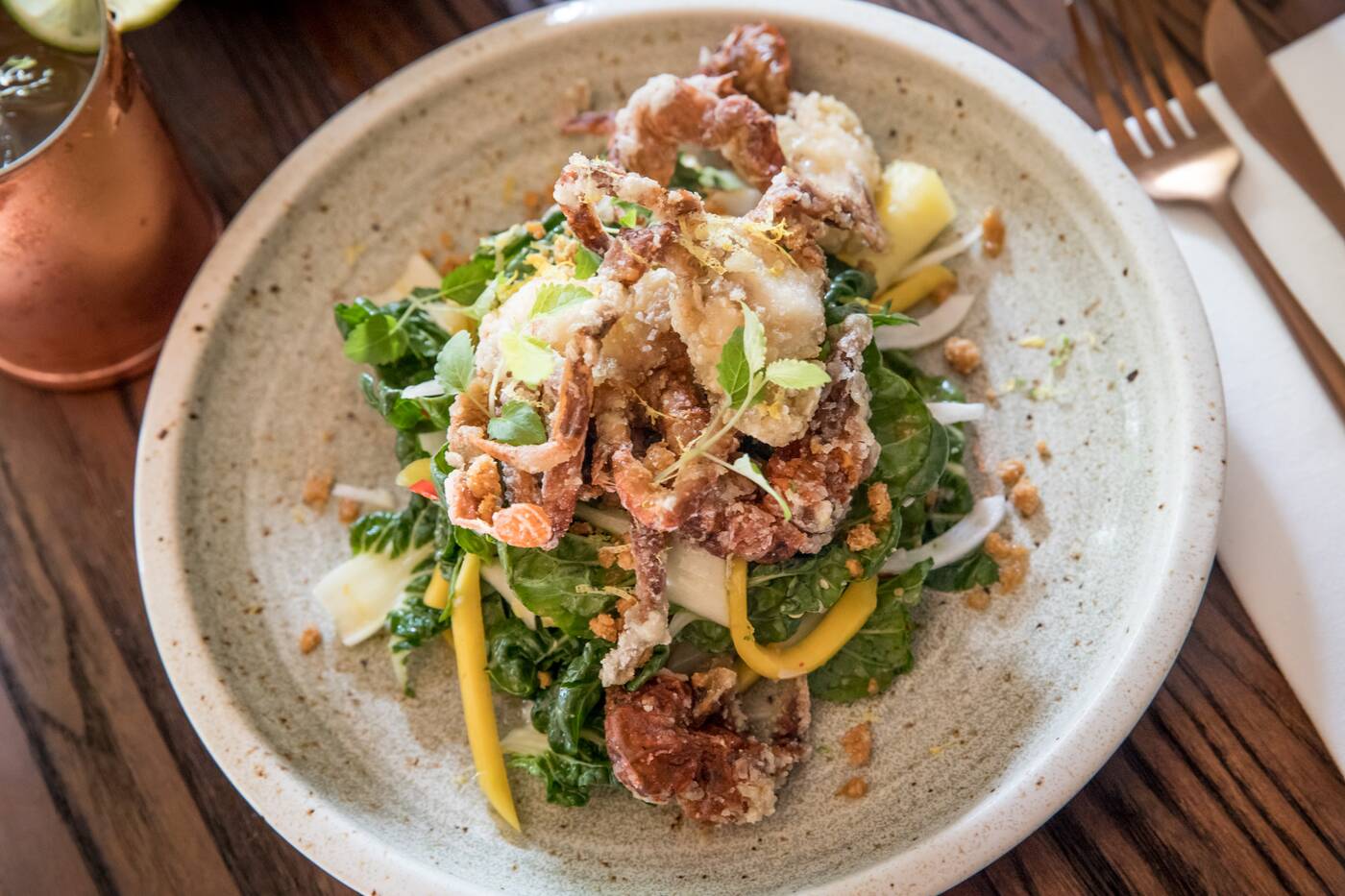 Sunny Beach Salad ($18) is another cold dish that sees deep-fried soft shell crab top Chinese bok choy and more Southeast Asian tropical mango and pineapple dressed with fish sauce. It’s a bit tough to get all the components in one forkful, but the combo is pleasant. 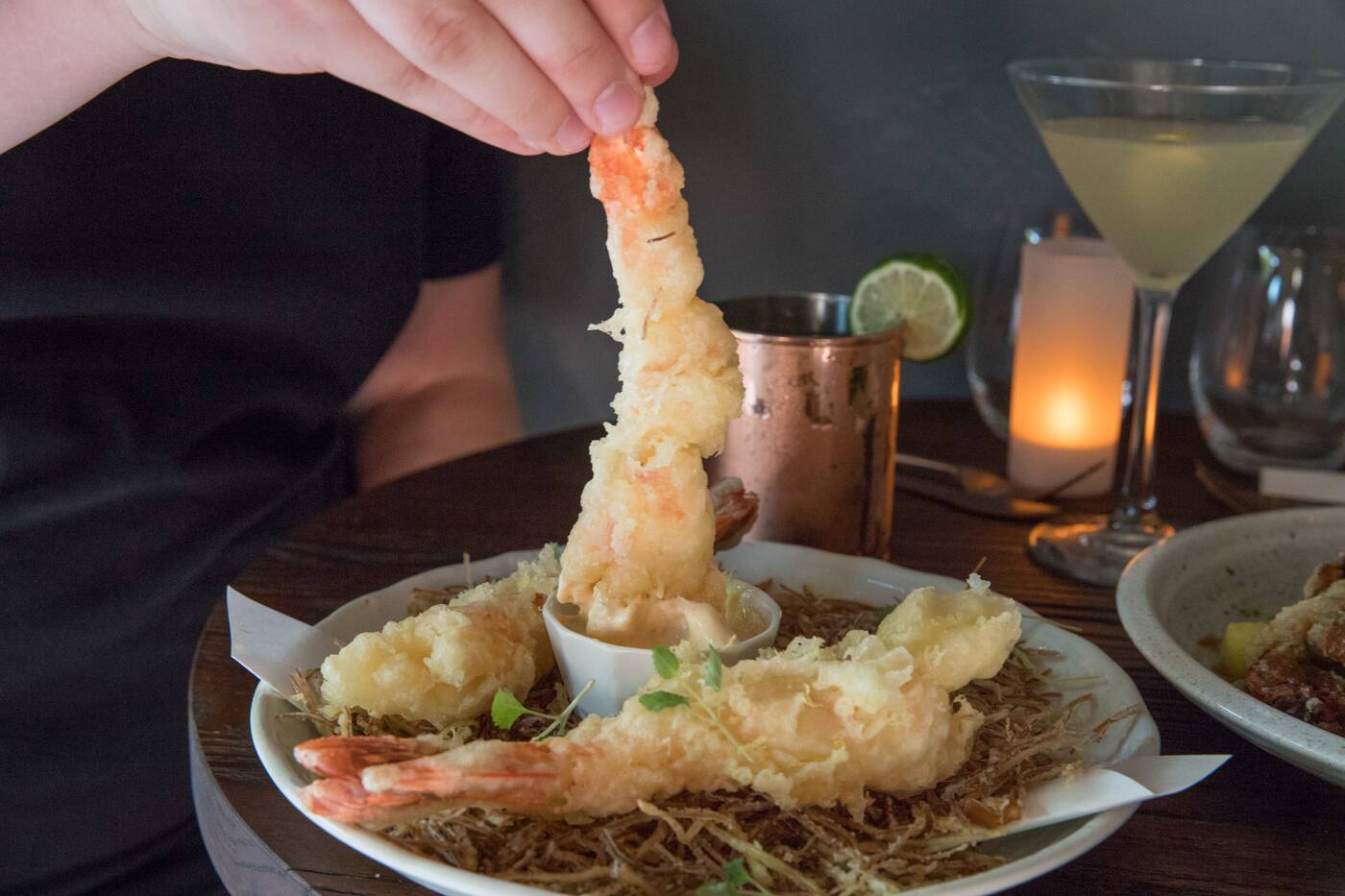 9 Ounce Shrimp Tempura ($21) starts us off on our hot dishes, quite pricey for three pieces of familiar tiger shrimp tempura, though it is quite filling with a thick pollack roe sauce. The tempura is also pleasantly plated on a bed of aromatic fried leeks with a little lemon. 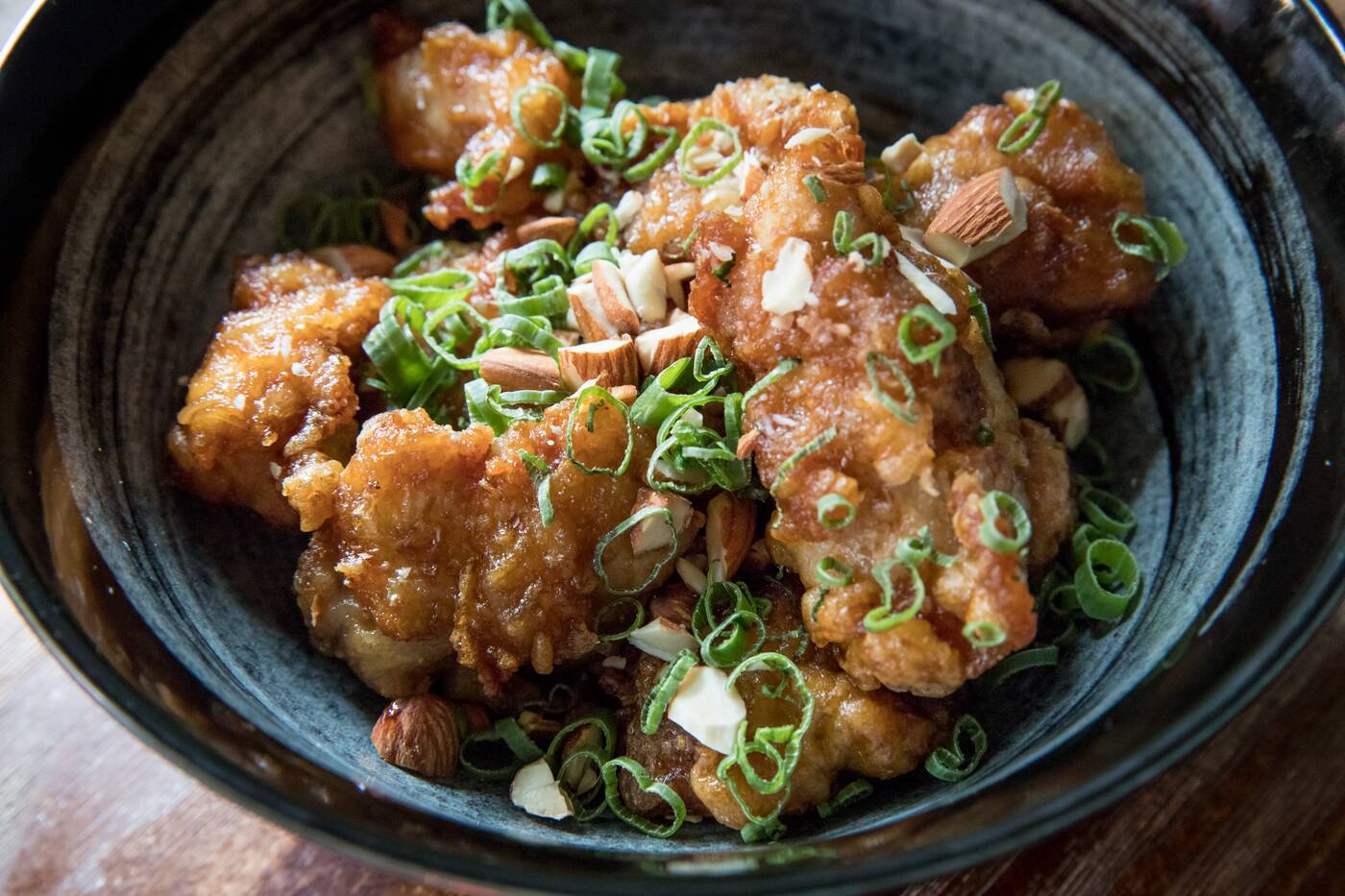 Night Market Chicken ($12) is a standout, prepared in a traditional Japanese night market style with a six-hour tare sauce and another mother sauce, deep-fried and wok-tossed so that it’s only about two-thirds sticky and still crispy. Almonds and scallion add texture. 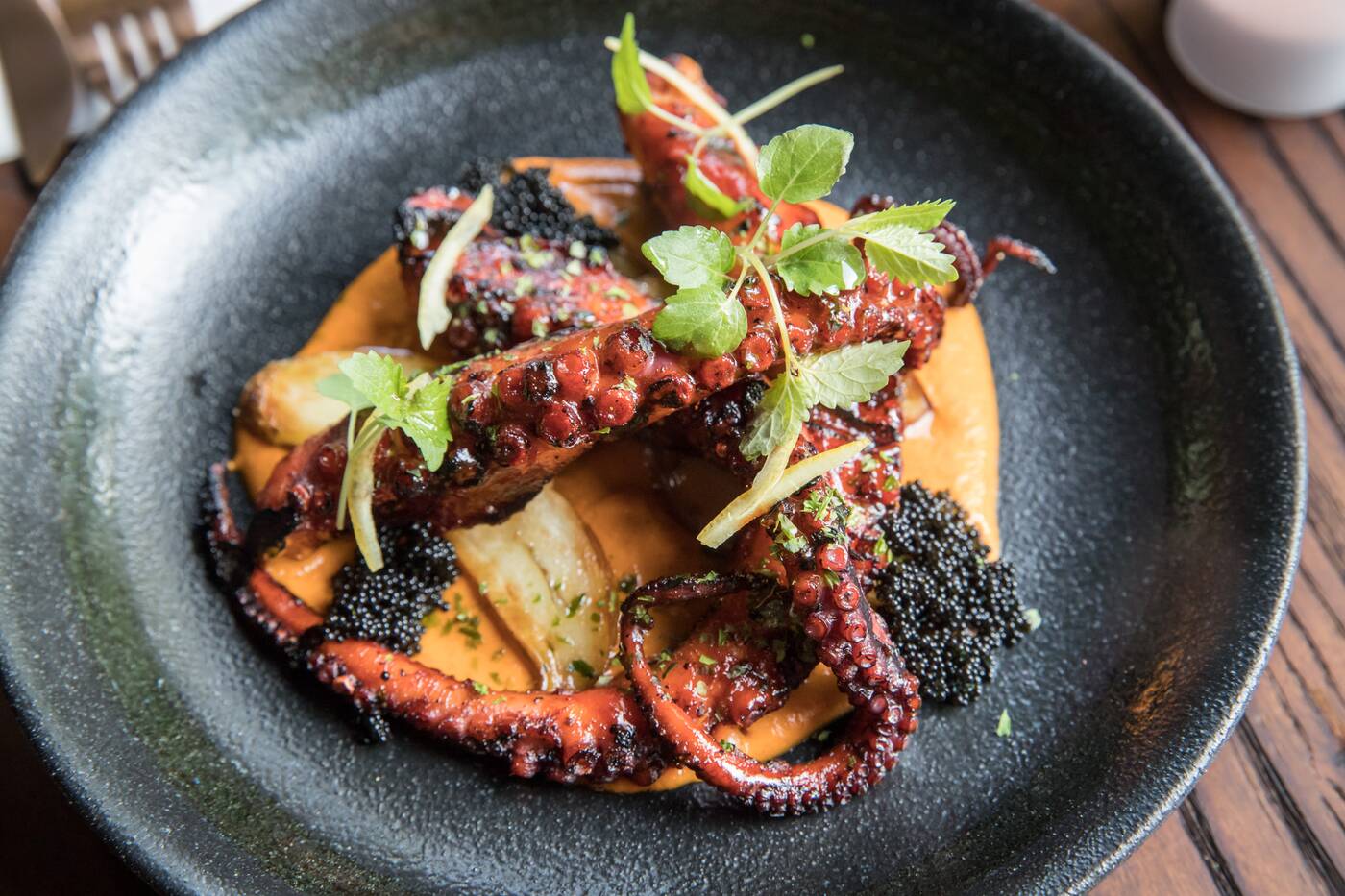 Mama’s Octopus ($18) sees octopus cooked sous-vide and grilled with gochujang on a bed of romesco sauce and confit potato with a surprising pop of tobiko. 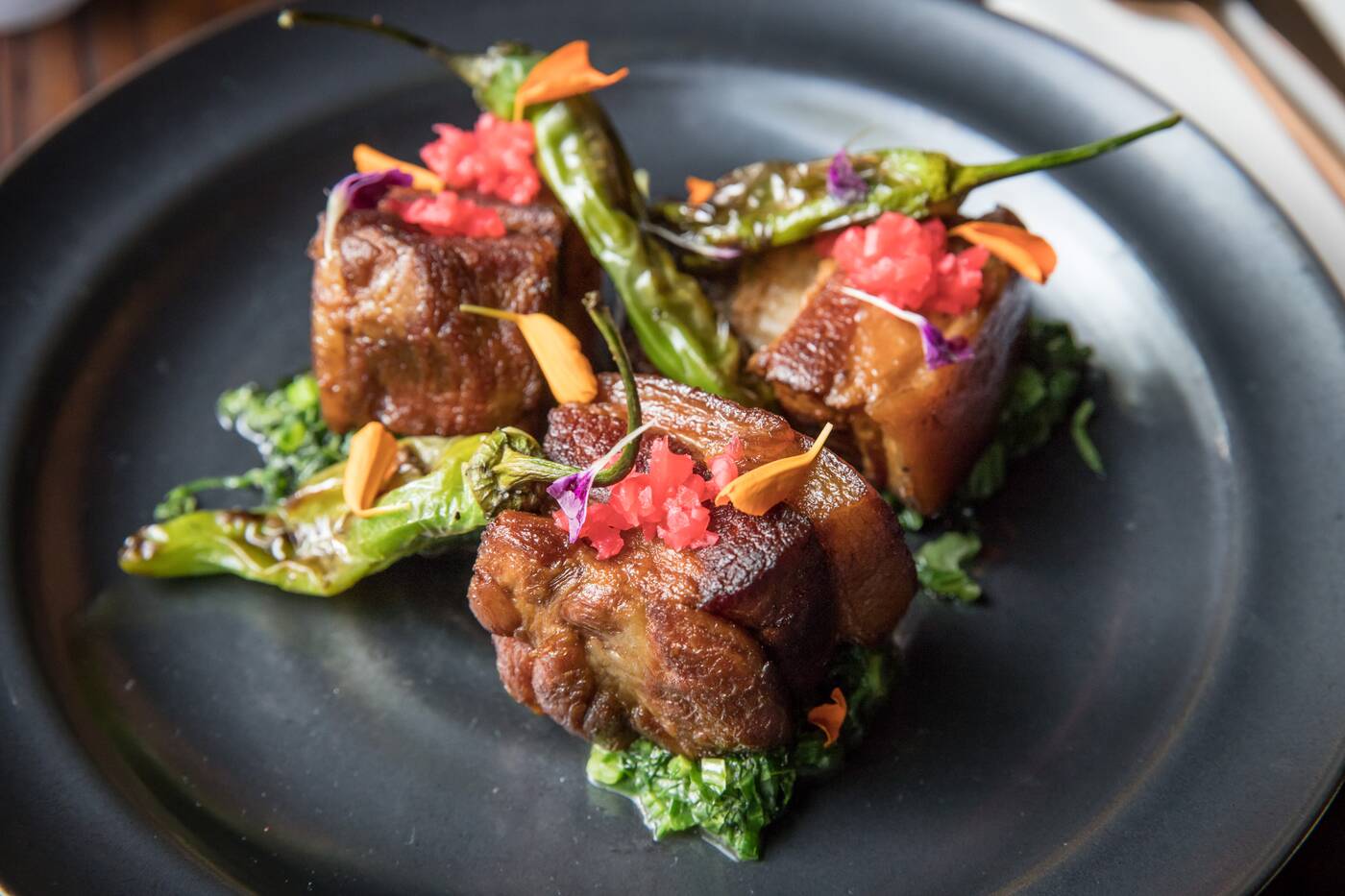 Pork Belly 10013 ($16) has the same sticky six-hour tare sauce, braised in the Chinese style of red pork. Grilled shishito and pickled ginger give the heavy dish a lift. 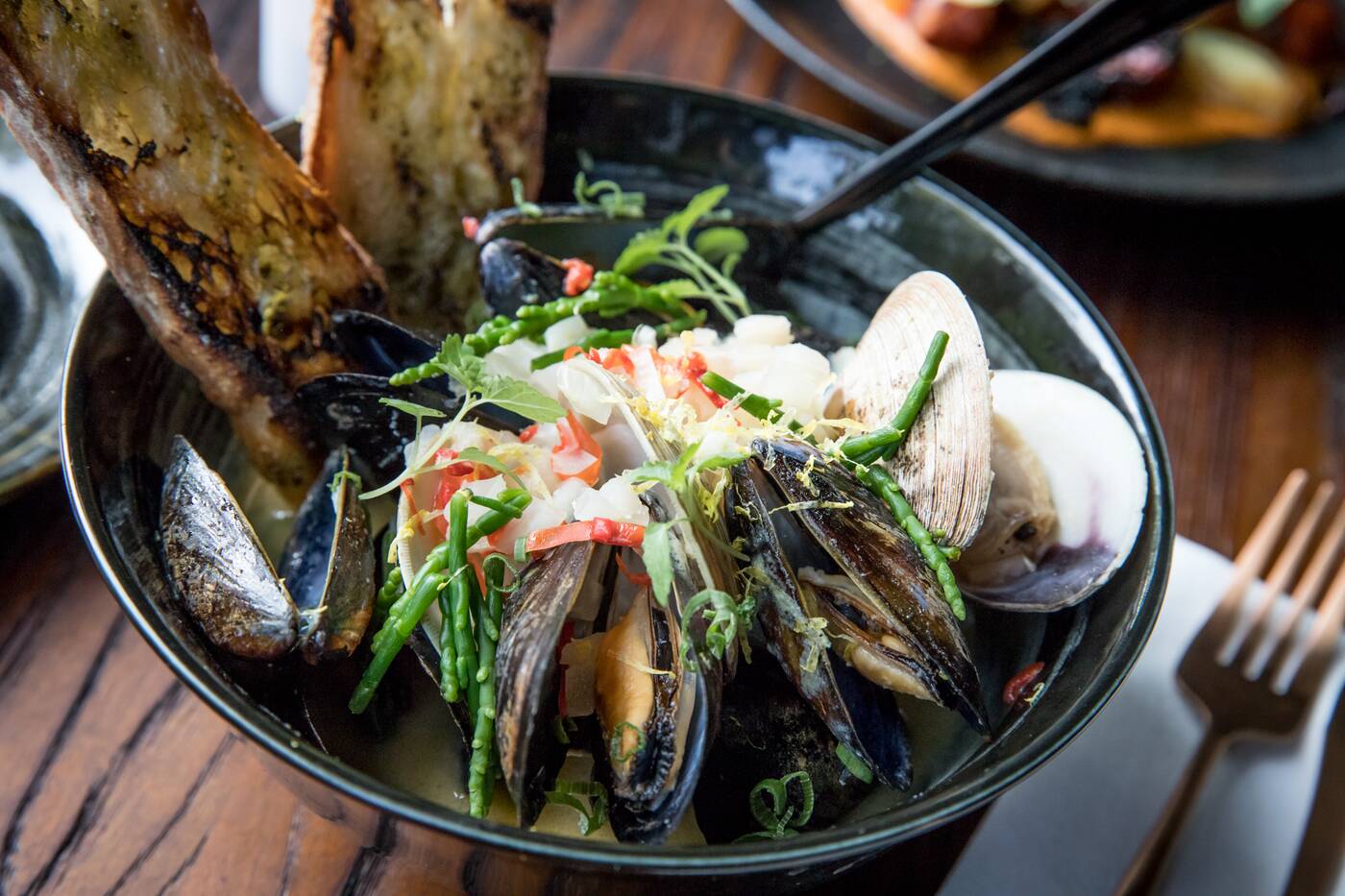 Sea of Japan ($19) bathes briny littleneck clams and mussels in a white wine, miso butter and garlic broth with sea asparagus, fennel, and some charred crostini. 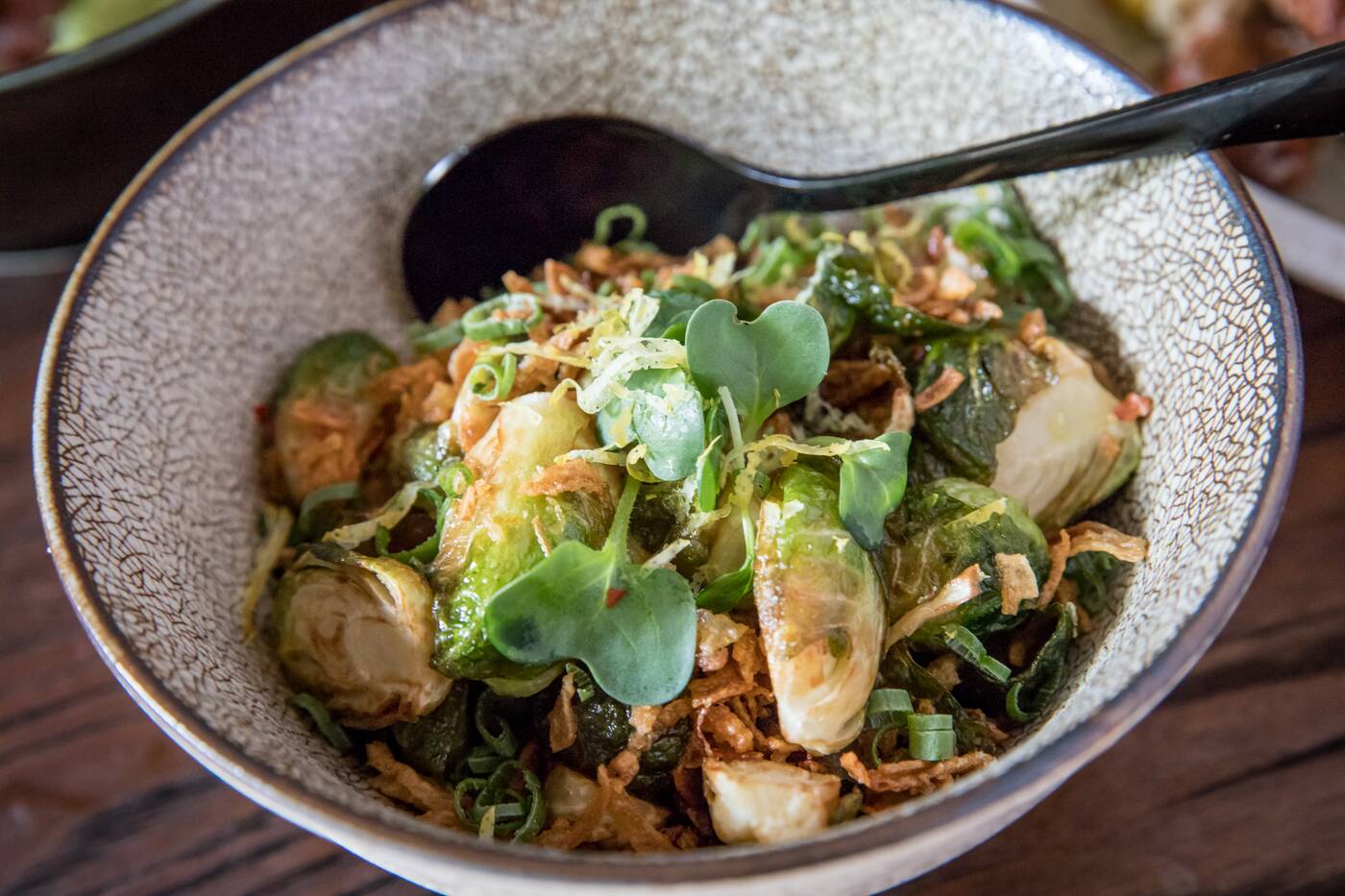 Warm Brussels Salad ($11) makes for a vegetarian small plate or side, deliciously deep-fried sprouts with crisp onions and a fish sauce dressing. 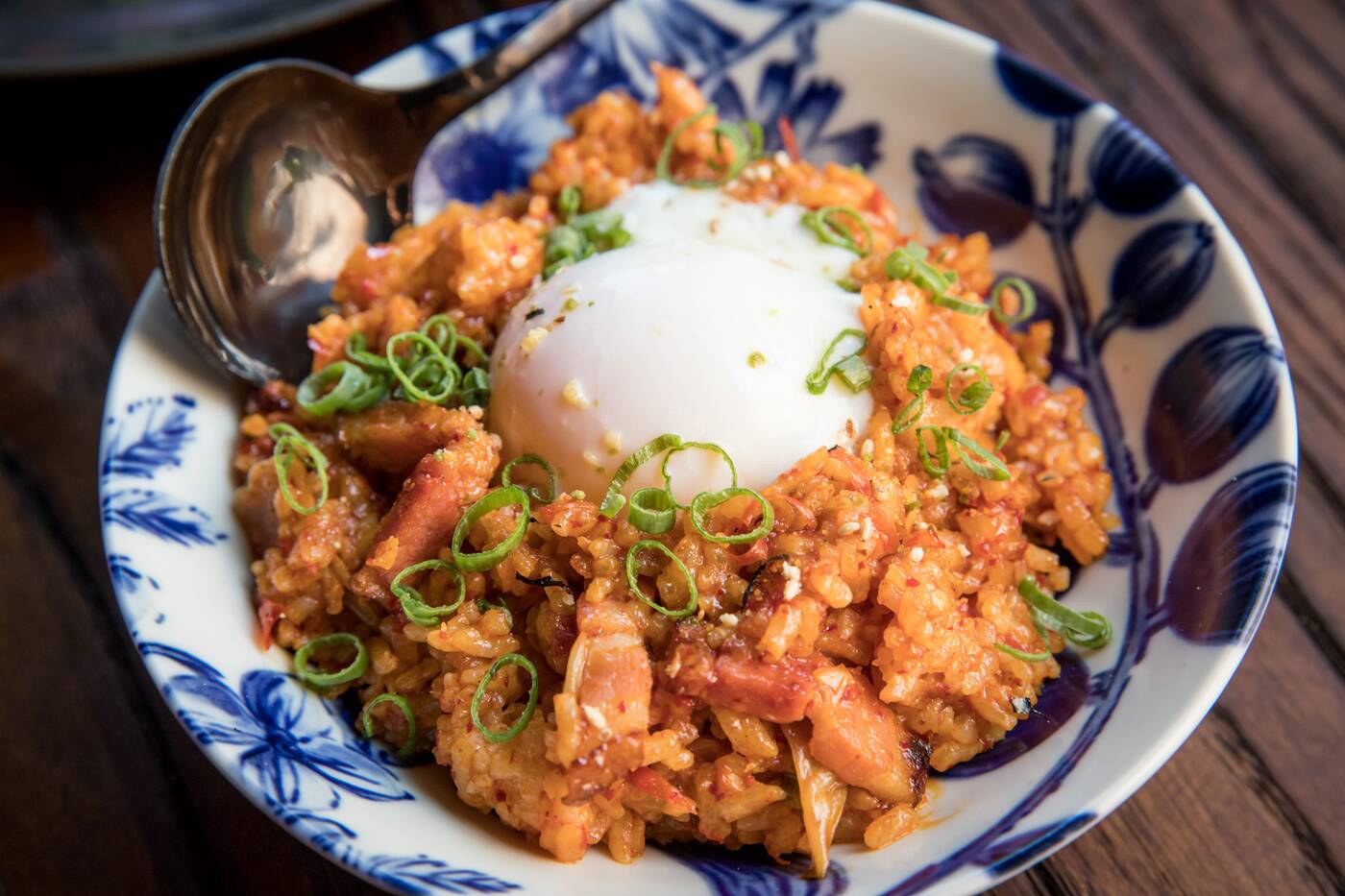 How Koreans Eat Fried Rice ($13) tweaks a traditional dish by using double-smoked bacon, house kimchi, and a fourteen-minute sous-vide egg instead of a fried one. 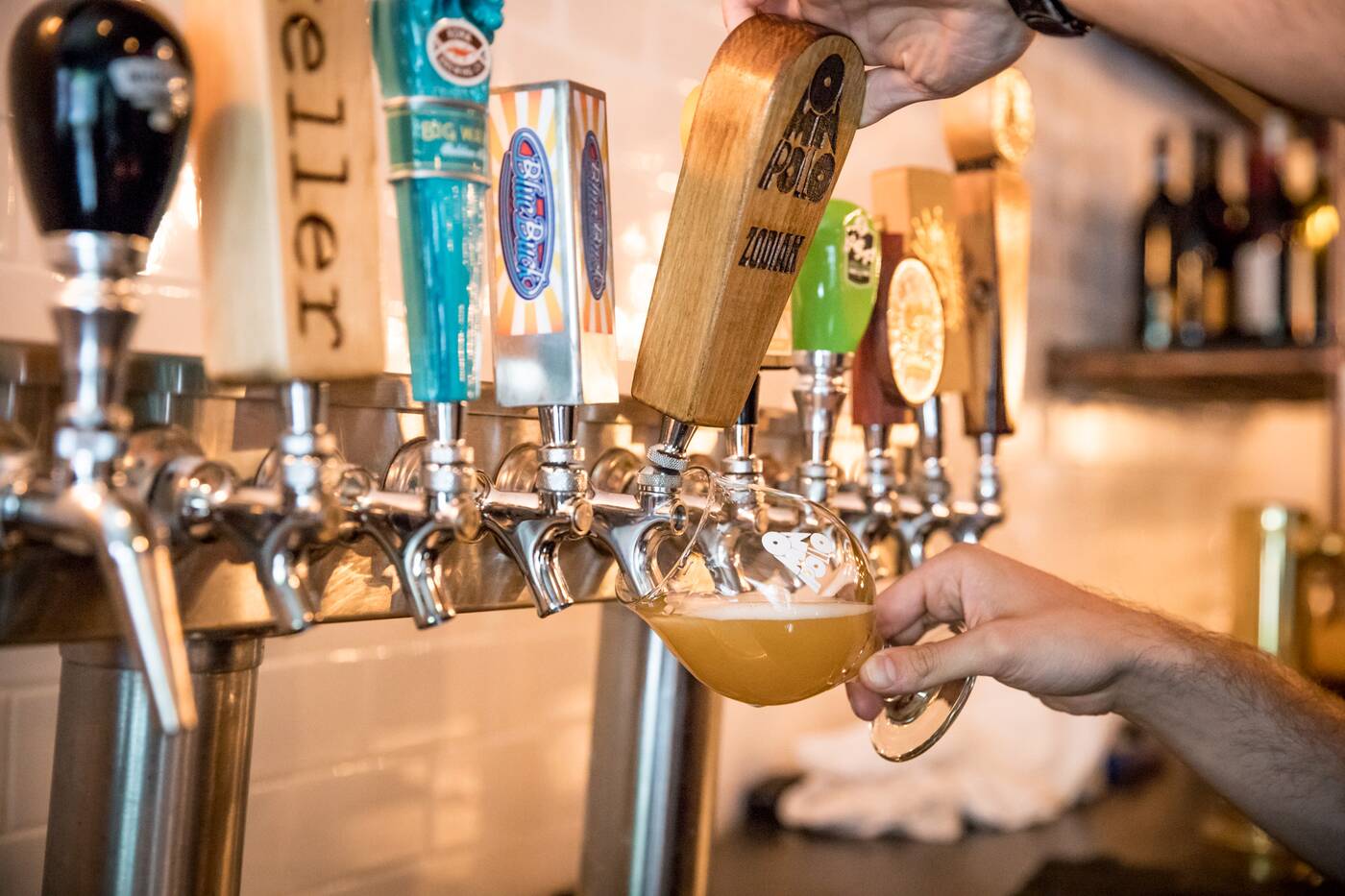 The Aniq Dark & Stormy ($12) is made with house ginger beer, but it’s the craft beer on tap from brewers such as Omnipollo, Blood Brothers and Ace Hill that’ll keep me coming back. 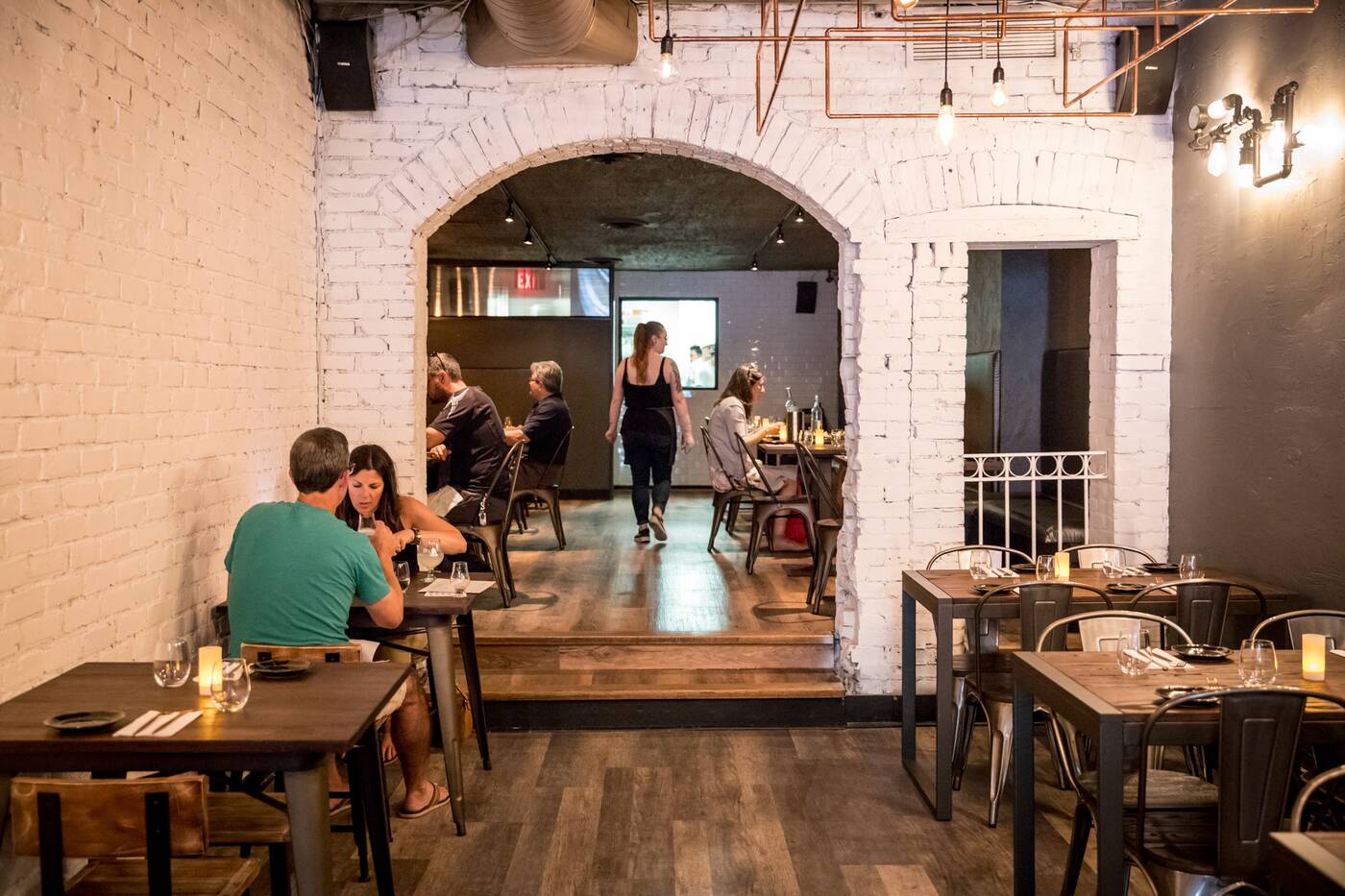 A stark colour scheme of white, grey and black retains an industrial feel with exposed brick and metallic light fixtures, and there’s still a dimmer area tucked away at the back where there’s a window looking in on the kitchen. 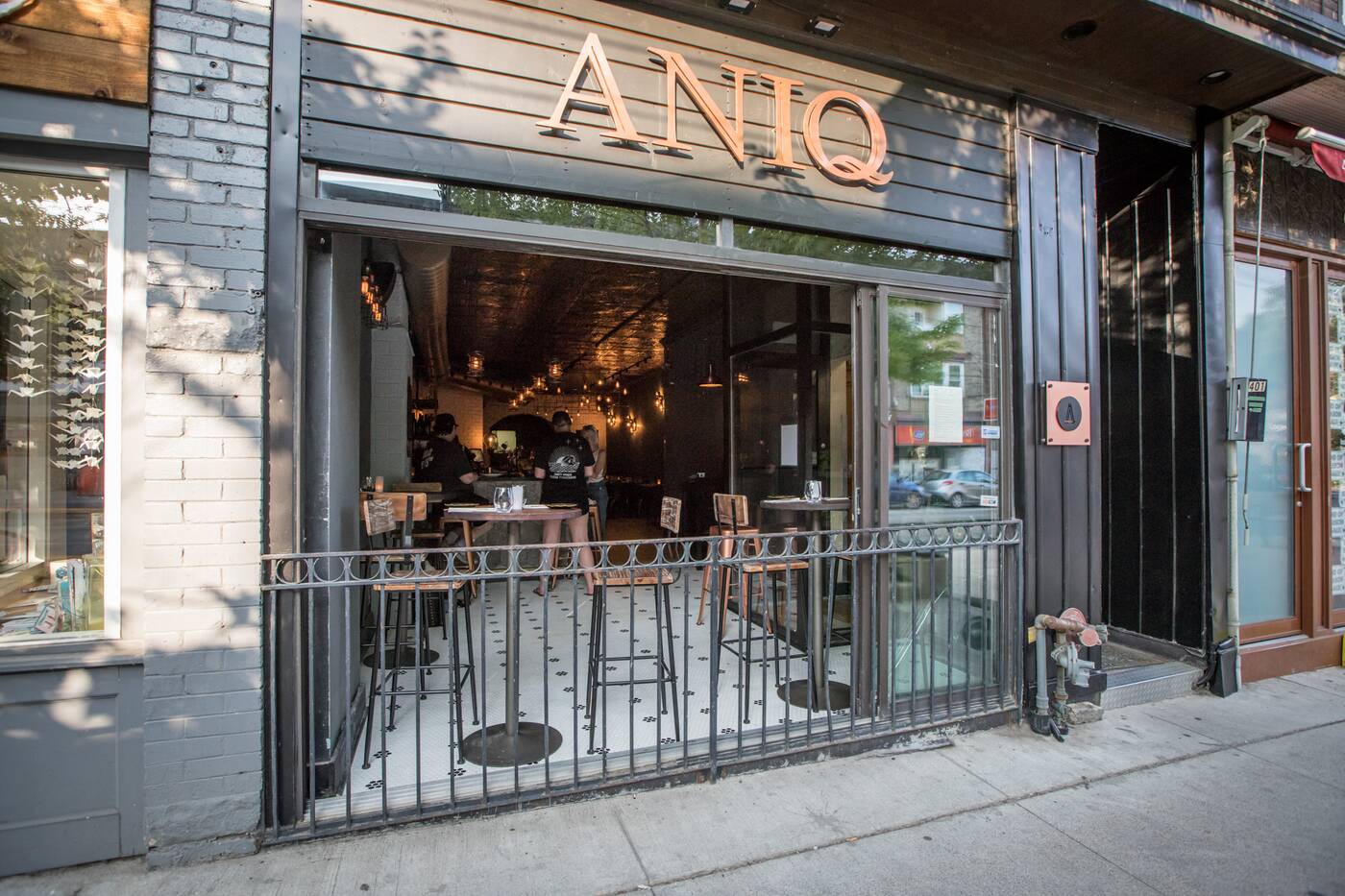