Akram's Shoppe has a simple philosophy: delicious, fresh and healthy food at prices affordable to everyone. Akram and his wife Hiyam reopened the shop in May 2010 after a nightmare renovation project that kept them closed for nearly three years. Since moving into Kensington Market , I've sworn by Akram's eating here nearly daily. It's light on the bank account and the waistline and without fail, mouthwateringly delicious. Their tweets on what's cookin' in the Shoppe have come to feel like my mom calling me down for dinner. 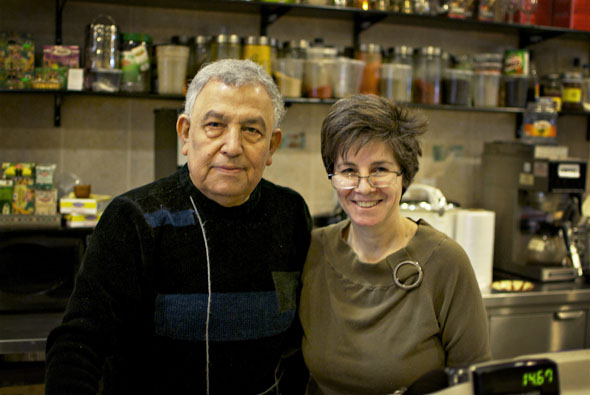 The real star of the menu at Akram's is their special recipe falafel sandwich. Unlike a regular falafel made with chick-peas, Akram's falafel is a mix of soya, fava and mung beans which form a crispy outer-shell in the deep-frier, preventing it from soaking up oil like chickpeas do. I've tried falafels all around the world, from Israel to Turkey to the famous Marais falafels in Paris, and I can honestly say this is one of the best I've ever had. It's filling and hearty without feeling heavy in my stomach. The falafel balls are toped with fresh fattoush, onions, tomatoes and drizzled with tahini sauce, then wrapped up and grilled in a fresh pita. At $2.99, it is Toronto's cheapest and healthiest falafel and 100% vegan to top. 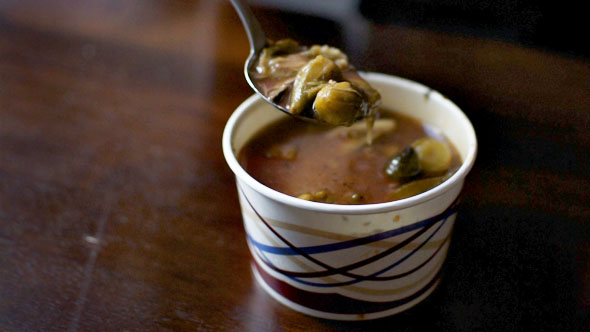 The "hot meal" combo is another one of the best deals in Toronto. For just $4.99, diners are treated to a heaping plate of rice, salad and an entree of choice. The authentic Indian basmati rice, specially imported since Hiyam can't find the right kind in Toronto, is cooked differently (but always vegan) everyday with ingredients like chick peas, lentils, beets, and artichokes. There are an endless variety of entrees that change daily with two or three meats and at least one vegan option. 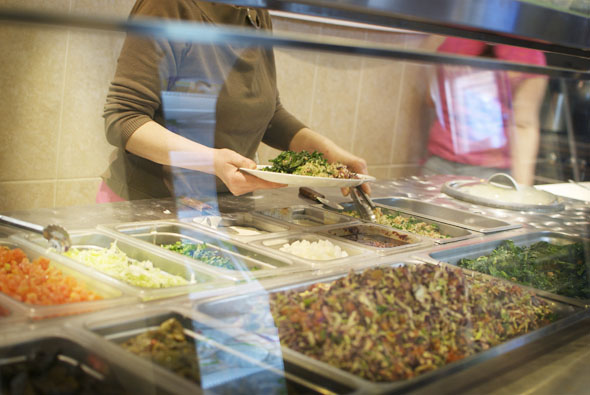 I typically eat vegan but I decided the delectable chicken skewers looked too good to pass up so I quickly buried away every flashing image from Food Inc coming through my head. The chicken was char-grilled on the outside and perfectly tender and juicy all the way through. The large pieces of chicken pulled off easily and I ate them with the rice.

I chose a mix of the two salads they offer, fattoush and spinach, rather than committing to one since they are both superb. I have never been keen on raw spinach but Akram's has managed to get me hooked. I asked if they lightly cooked their spinach to see if that was what made the difference, but Hiyam told me it was all raw since cooking it would cause it to lose nutrients. The fattoush, an ancient and traditional middle-eastern salad, is an exquisite blend of pomegranate (which Hiyam tells me is very high in antioxidants), cabbage, carrots, cucumber, tomato and spices. 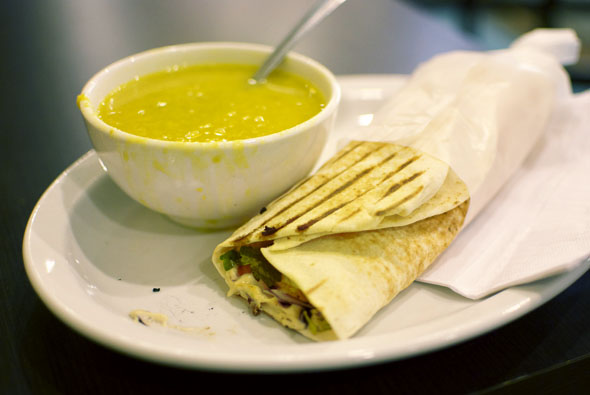 My friend ordered one of my menu favourites, the hummus sandwich, which I got hooked on during the week it was on special for $1.99; each week features a different sandwich on special. A generous scoop of homemade hummus is spread onto a piece of pita bread- you can ask for whole wheat- and fattoush, tomatoes, onions topped on and the whole thing grilled together in a pita.

For only $2.99 it makes for a great, light and healthy meal or snack. Along with the sandwich, my friend ordered the vegan lentil soup, a creamy, thick blend of lentils and spices. For dessert, we both had a piece of fresh-out-of-the-oven sweet and gooey baklava made by Hyam's son Omar who is trained as a pastry chef from George Brown College. 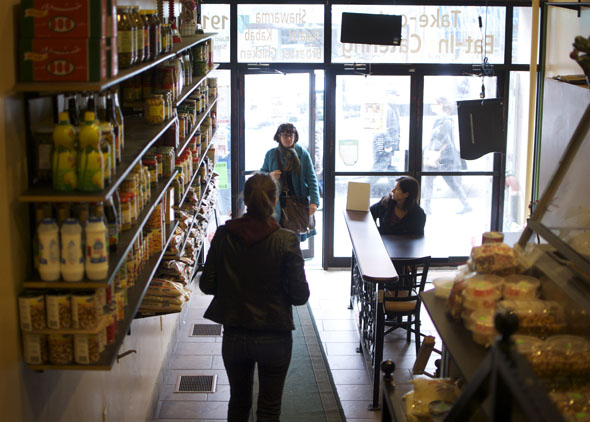 In addition to serving prepared meals, Akram's is also a small grocery store, selling a number of their own homemade dips and twenty varieties of hummus including beet, squash, zucchini, dill parsley, coriander, and 'designer' cheese yogurt hummus. They also have a selection of imported middle-eastern groceries and sell bags of quinoa at $7.99 for two pounds, which you'd pay $9 for at the bulk food stores across the street.