A plan for a massive Toronto condo development that could bring thousands of residents to a neighbourhood has some residents raising the alarm.

The mixed-use community plan included nine towers of 40 to 52 storeys each, set atop six-storey podiums, as well as two new public parks, among other amenities. If built, the complex would house more than 4,000 units.

Also slated for the area are two more apartment buildings at 175 Wynford Dr. are three residential tall buildings ranging from 55 to 65 storeys and a total of 2,500 residential units, according to City of Toronto documents.

The City of Toronto's development records show the plans for the Concorde Gate condo development were rejected and sent to the Ontario Land Tribunal. 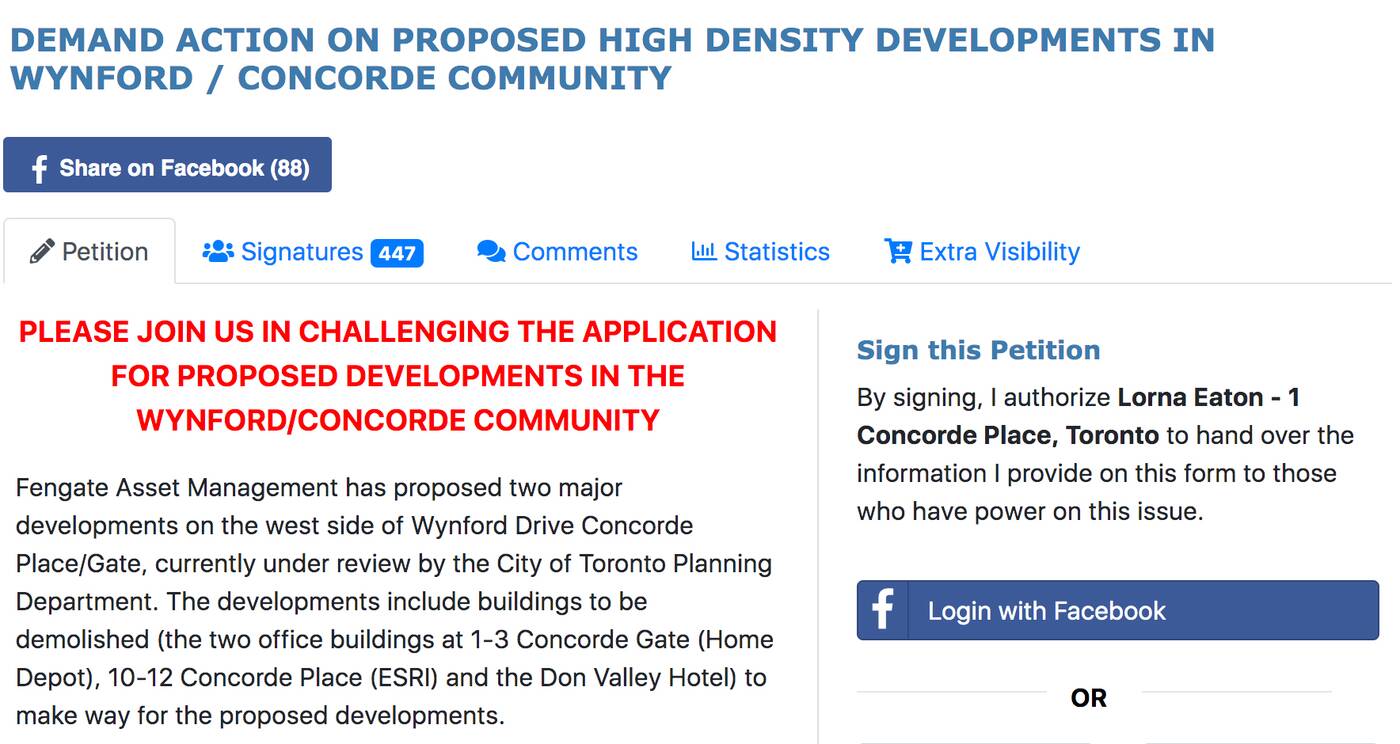 A petition launched against the density for the new developments.

But several residents are not happy with the possibility of such a large influx of residents coming to their neighbourhood and have launched a website and petition in protest.

A group of residents from the existing condo buildings are behind the protest, resident Paul Fox tells blogTO.

They estimate up to 22,000 residents could come to the area if the projects are approved.

Packing this many people in the area will cause "stress for families who will have no walk to school, minimal recreation space, and no community resources," says an area resident.

Another resident, architect Cameron Ridsdale, says the proposal is out of character for the area. The current buildings are set well back from the street and behind tall trees.

"Using the City of Toronto tall buildings guidelines to justify six story glass walls only a few metres from the sidewalk is totally inappropriate," Ridsdale says.

Another resident called it a "monstrous development" without enough amenities such as shopping and schools to support it.

There are also concerns about excessive traffic, safety and destruction of trees.

The residents aren't against new developments for the area, says Fox, but they want the density to come down.

"Our plan of action will be to fight to lower the density of two proposed major developments in our neighbourhood," the website reads.

This story was revised on March 24 to update the proposal for 175 Wynford Dr. is for three residential tall buildings ranging from 55 to 65 storeys and a total of 2,500 residential units