While home ownership in Toronto may be increasingly out of reach for the vast majority of residents, rent prices in the city are slowly back on the rise, too, following pandemic lows that saw a glut of vacant apartments and thus falling rent prices for more than a year straight.

Part of the affordability issue in the city is, of course, low supply vs. ever-higher demand, and thankfully when it comes to purpose-built rentals, the GTA has been booming with new construction.

Stakeholders have indeed been trying to fix the fact that Ontario is officially the worst province when it comes to housing stock for its growing population, and last year was a banner year for new builds in the GTA specifically, hitting a high not seen in more than 30 years.

Work was started on 6,720 new units, according to a new report from real estate consulting firm Urbanation — remarkably almost double the average number of new rental units started in the GTA each year between 2016-2020 (3,379), making for a total of 17,912 rental apartments in some stage of completion as of the end of 2021. 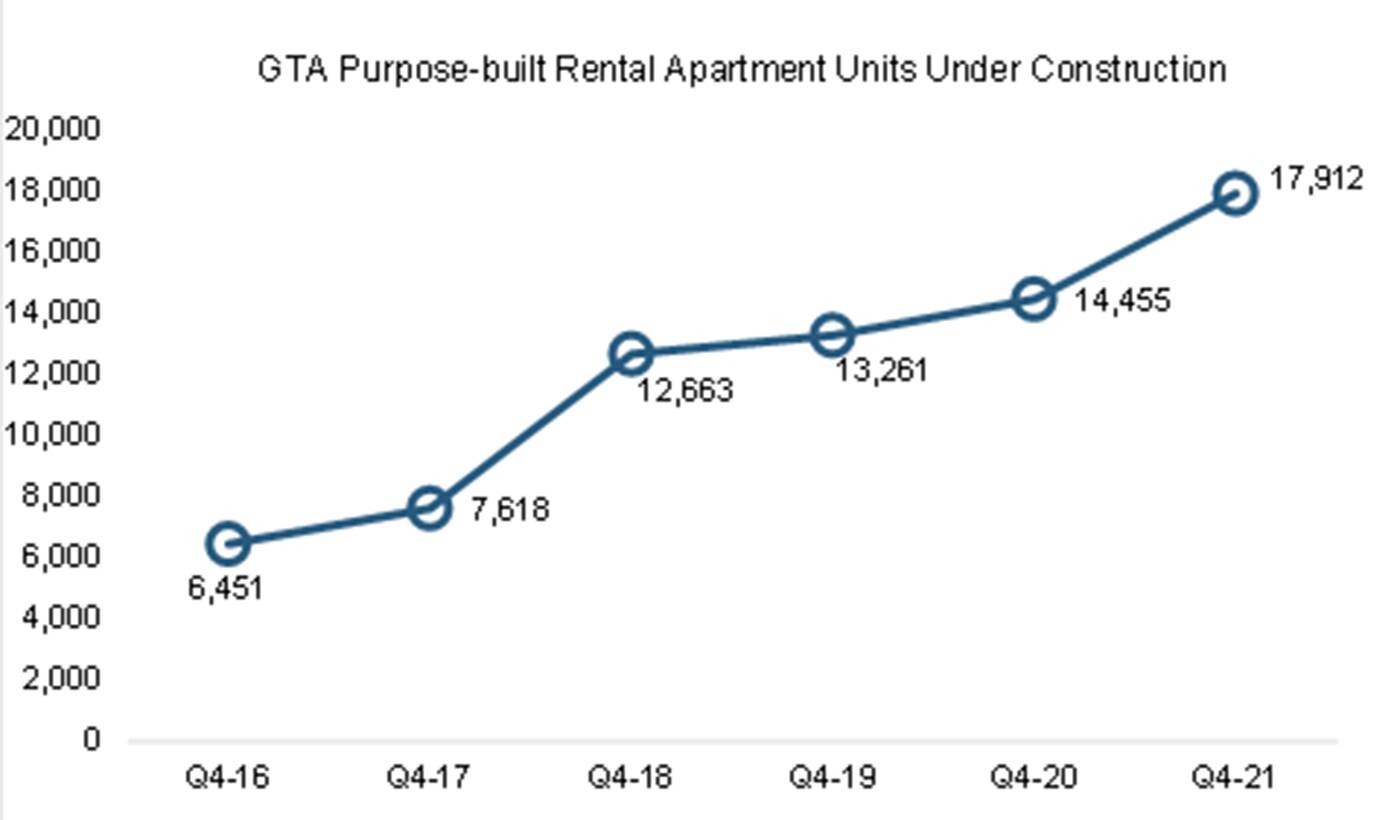 Construction kicked off on purpose-built apartment units in the GTA in 2021 than in over 30 years. Graph from Urbanation.

By year's end, there were also another 93,321 proposed for development in the region, which is Ontario's busiest and most expensive to live in.

That's a lot of homes for tenants in and around the city, which is especially important given that vacancy rates across the GTA fell to 2.4 per cent for rental buildings in the last quarter of 2021 — finally reaching pre-pandemic levels once more — compared to the much higher 6.4 per cent in the GTA and 9 per cent in downtown Toronto during the first quarter of the year.

Though remote workers fled the city earlier in the health crisis amid more stringent lockdowns, driving up rent and real estate prices in nearby locales both in and beyond the GTA, it seems that given these numbers and the rates of rental transactions being completed over the course of the year, that phenomenon is largely over.

The number of leases signed in the GTA overall in 2021 was up 24 per cent from 2020, and the number of units still available by the end of December fell a whopping 73 per cent year-over-year. 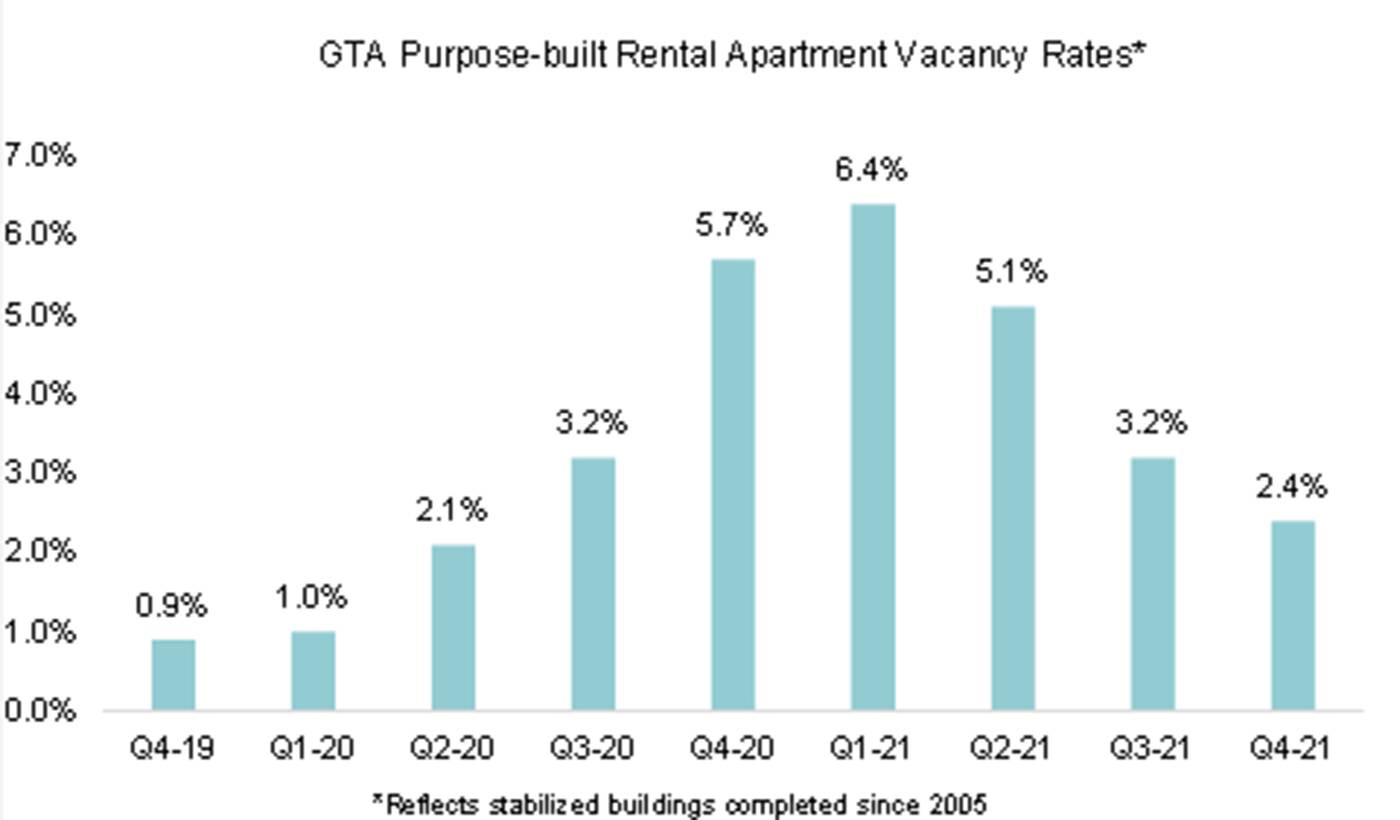 How vacancy rates in GTA apartment buildings have changed in recent quarters, dropping down in Q4 2021 to pre-pandemic levels. Graph from Urbanation.

Urbanation notes that the downtown market was the growth leader in this case, especially when it came to smaller units under 600 square feet, which many people had previously moved out of for more space elsewhere or converted from Airbnbs to normal apartments amid lockdown, leading to that surge in vacancies.

These small units, which seem to be garnering the most interest now, are also climbing in price the most, with the report noting that studios saw the largest jump in average rent (15.9 over the course of the year, to an average of $1,771 a month), though prices across the board for all unit sizes increased notably between 2020 to 2021.

The rent costs for units in condo buildings also spiked hard, especially in the downtown core — the average rent price for a condo apartment in the last quarter of the year were up 10.8 per cent year-over-year in the GTA and 15.9 per cent in the downtown core, making for average prices of $2,361 ($3.27 per square foot) in the GTA and $2,282 ($2.95 per square foot) downtown for this unit type. 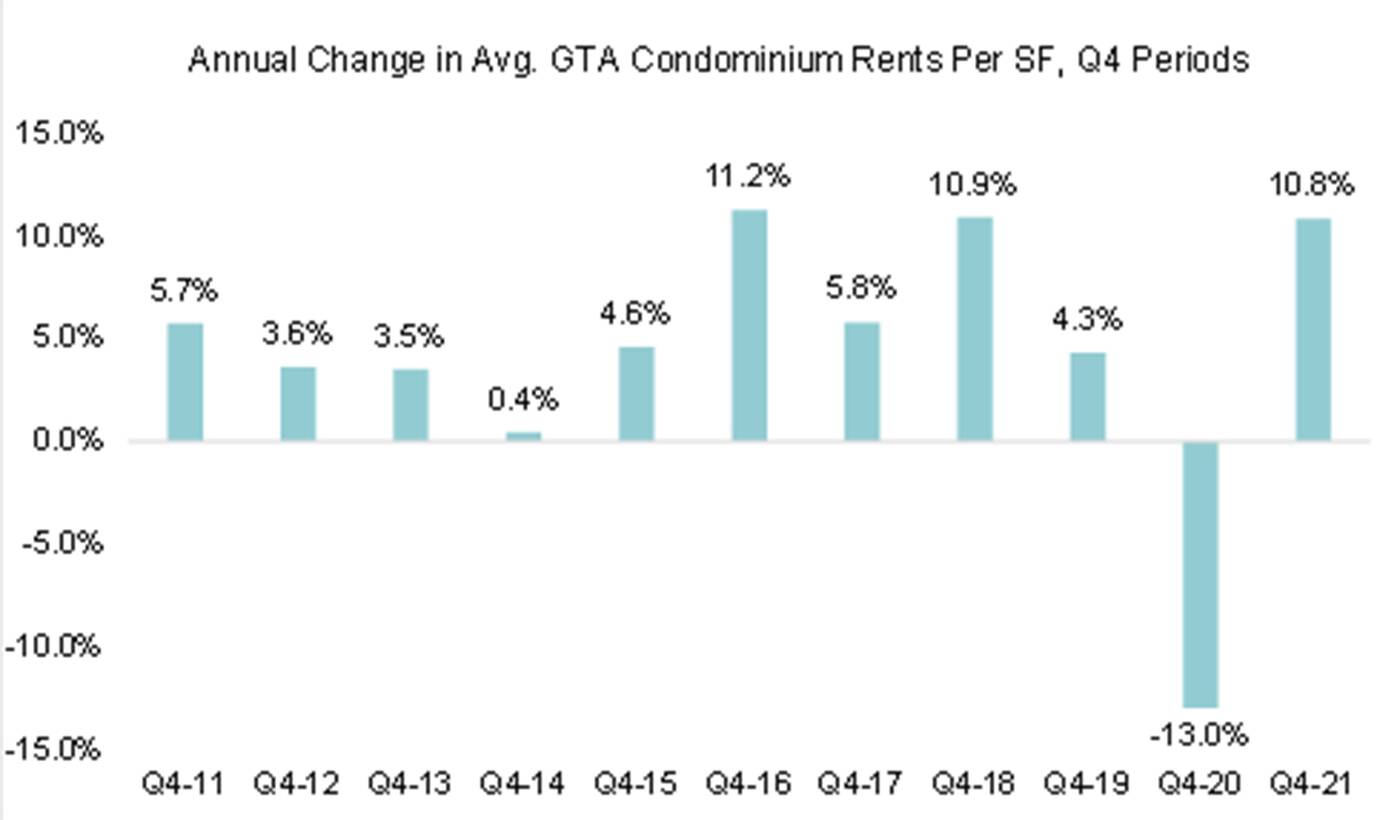 Interest in rental units in GTA condo buildings has meant prices spiked back up after record lows in 2020. Graph from Urbanation.

Though the new construction amid these inflating rent prices would hopefully mean enough supply to keep rent pricing reasonable and nowhere near the $2,515 per month average we saw back in fall 2019, the experts at Urbanation are not calling for a price plateau anytime soon.

"The GTA rental market downturn that occurred during 2020 as a result of the initial effects of COVID-19 quickly reversed in 2021," their report says.

"While an expected record high for condominium completions and a multi-decade high for purpose-built rental completions in 2022 may help to keep some level of balance in the market this year, expect rents to continue growing on record high immigration, rising incomes and low homeownership affordability."