Go to school, study hard, get a degree — heck, get another degree if your undergrad B.A. feels useless — and then saddle on up to grownup life in the big city, where big paycheques equate to big houses and the means to start a family.

The rhetoric millennials have long been fed is false, as we as well know by this point: Sure, you can make great money (almost exclusively) in large cities with the right kind of talent, training and work ethic, but few people under 40 can actually buy a home in Toronto or Vancouver without some serious family backing.

To wit, the National Bank of Canada (NBC)'s latest Housing Affordability Monitor shows that one needed an annual household income of at least $205,342 to afford a "representative" house (currently valued at $1,195,754) in Toronto during the third quarter of 2021.

As of the third quarter of 2021, it would take someone earning $205,342 per year nearly 30 years to save up for a 10 per cent down payment on a representative detached home in Toronto. Graphic via National Bank of Canada.

Condo purchasers currently need an annual household income of $134,726, the bank says. It would take someone earning that salary (or a couple earning that combined salary) 58 months (roughly 4.4 years) to save up for a ten per cent down payment.

"Housing affordability in Canada worsened by 1.7 points in Q3'21, marking a third consecutive deterioration since the beginning of the year," wrote the bank in its most-recent affordability report, released in November.

For context, the Canada Mortgage Housing Corporation defines unaffordable as any market in which housing costs take up more than 30 per cent of a typical household's pre-tax income. 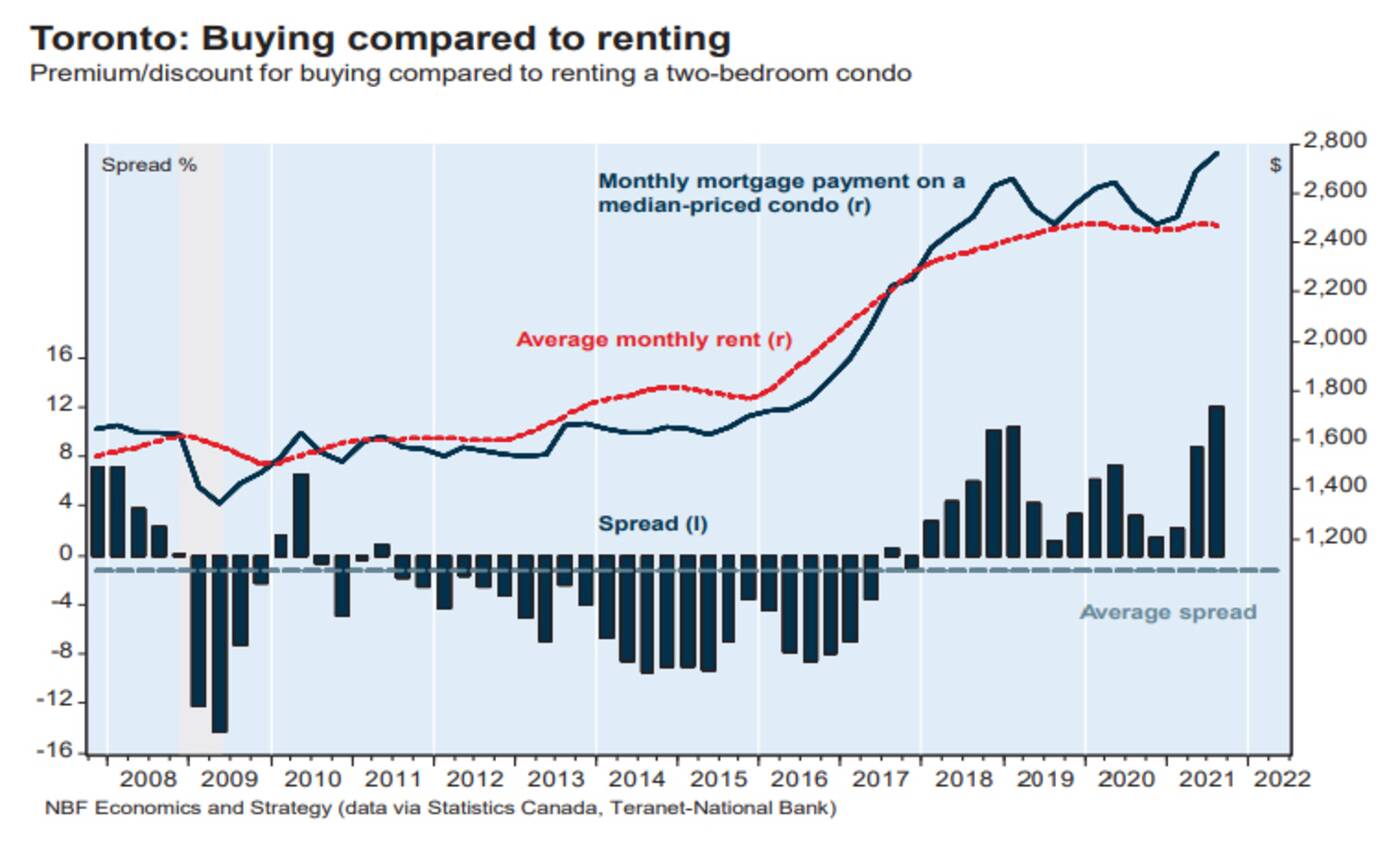 "Although interest rates were essentially unchanged in the quarter and income continued to grow at a decent pace, a strong jump in home prices was more than enough to reduce affordability," writes the NBC in its latest report.

"Indeed, home prices continued their relentless upward trajectory rising 4.6 per cent in the quarter and 18.6 per cent year on year. That annual figure was the most it has ever been since 1989."

For a representative household in Canada, it would have taken about 74 months (at a 10 per cent savings rate) for the median pre-tax household to purchase a detached property. This is double the 37-month average since 2000.

In Toronto, where house prices just rose for their ninth consecutive quarter, prices are up even higher at an annual increase of 19.5 per cent.

It's not hard to see why, despite all the joys of city living, young people are fleeing the 6ix in droves to start new lives in more affordable regions — nor can we blame the some 50 per cent of people under 40 who've given up on the idea of home ownership altogether.