Toronto will be getting a brand new community centre and park

The demolition of Newtonbrook Plaza on Yonge Street ripped a community amenity from the heart of North York in 2019.

In typical Toronto fashion, this shopping plaza was lost to make way for new condos, but it looks like the neighbourhood will be getting paid back with some impressive public amenities in exchange for enduring a few more years of construction.

Developer Aoyuan International's M2M Condos project — named for the local area code — will be bringing a new skyline to a stretch of Yonge Street north of Finch, with four mixed-use condo towers and an office building spanning an entire block. 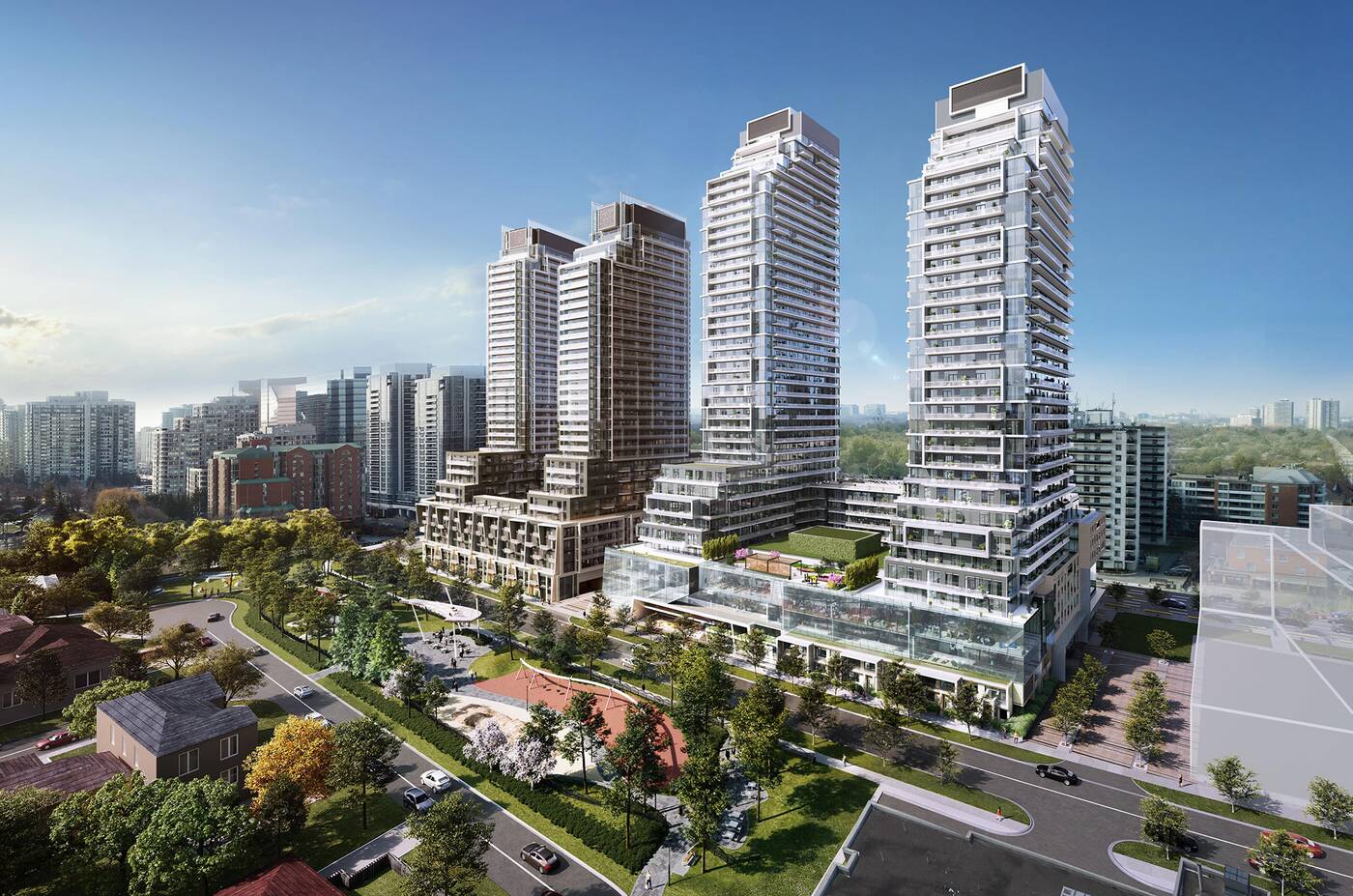 As part of the negotiations to get such a colossal project built north of the Yonge subway's terminus, the project will be giving quite a bit back to the area in the form of a new park and community hub.

"We wanted to develop a project that would bring families peace of mind knowing they would have convenient access to parks, childcare and other recreational amenities," said Fan Yang, General Manager Canada, Aoyuan International.

The base of the second phase will host a 46,000 ft² community centre and approximately 11,000 ft² of daycare facilities behind a crystalline glass frontage designed by Wallman Architects. 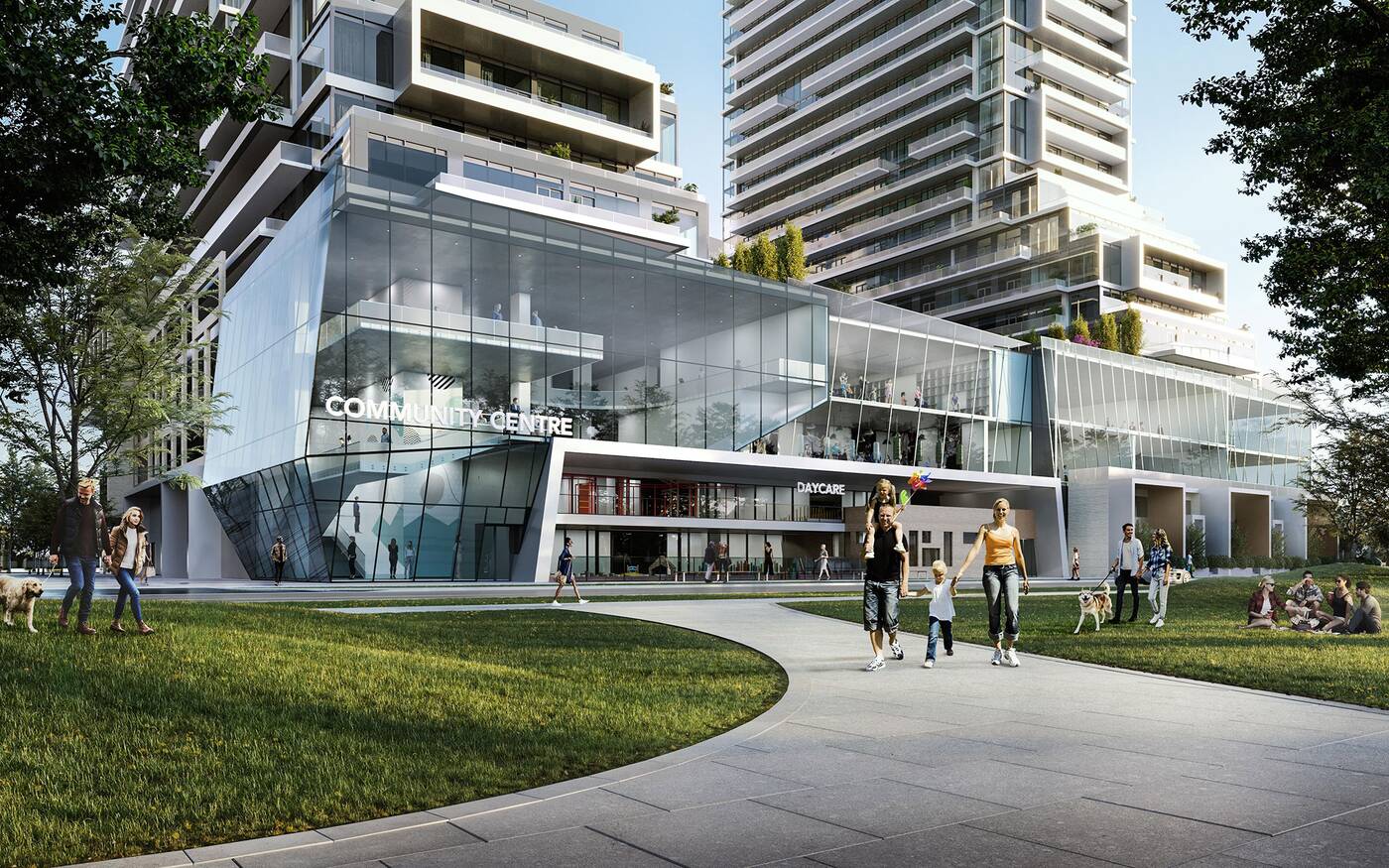 Inside, the community centre will feature a lofty double-height gymnasium with a basketball court and running track, and activity rooms, while the daycare facility will span two floors with a mix of indoor and outdoor play zones.

"The community centre, daycare and park at the foot of this project provides much-needed social infrastructure for the city and will be the central piece of the M2M community. Families can be at ease knowing what they need is within walking distance. They won't have to commute," said Vince Santino, SVP of Development, Aoyuan International.

The community centre will face onto a new public road to be known as Olympic Garden Drive. Just opposite this new road, the development is also funding the construction of a new public park. 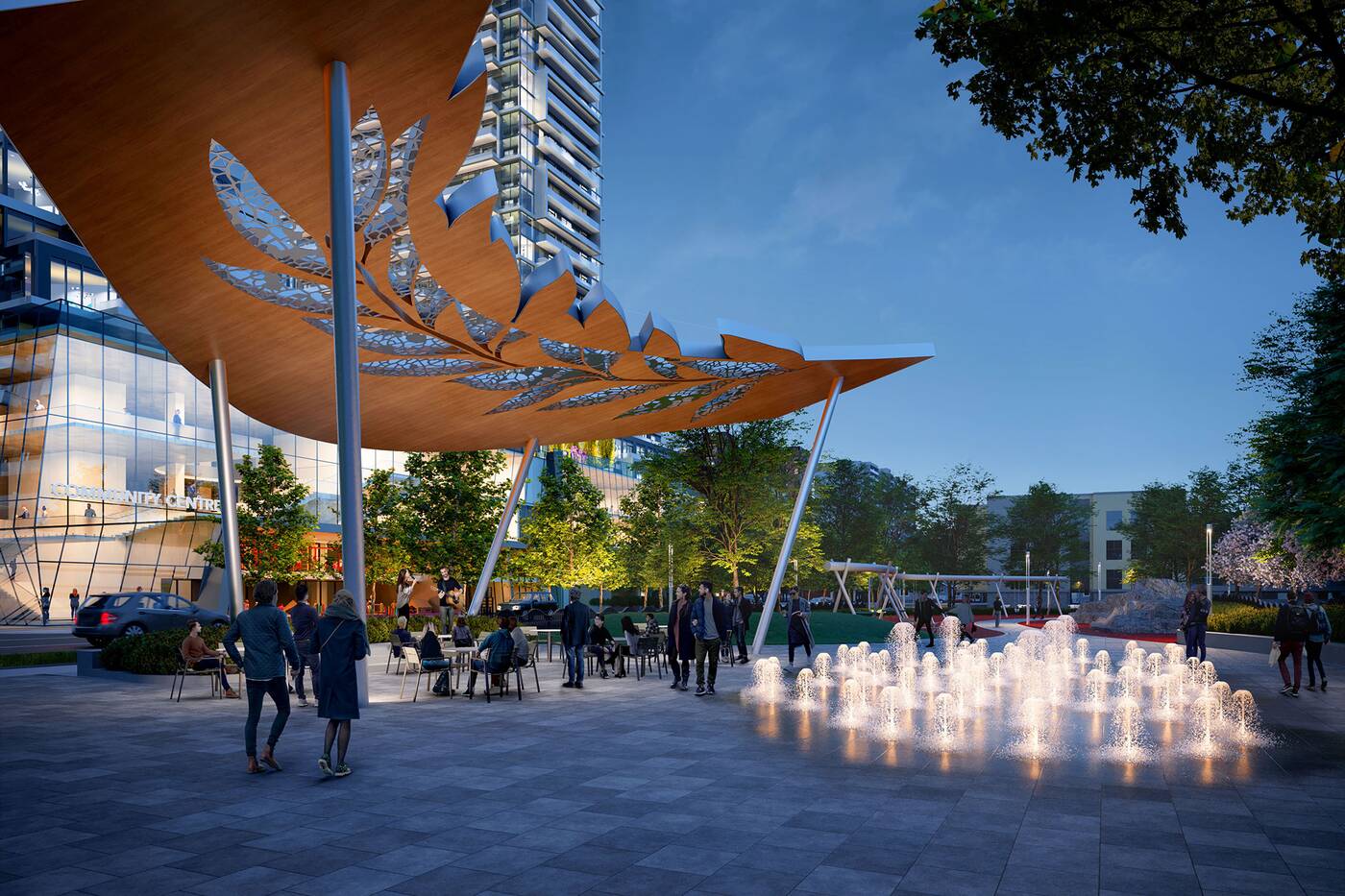 Evening view of the new park along the future Olympic Garden Drive.

Renderings of this park reveal some exciting features, including a beautiful shade structure with a leaf motif, a water play area, a children's play area, and landscaped green space. 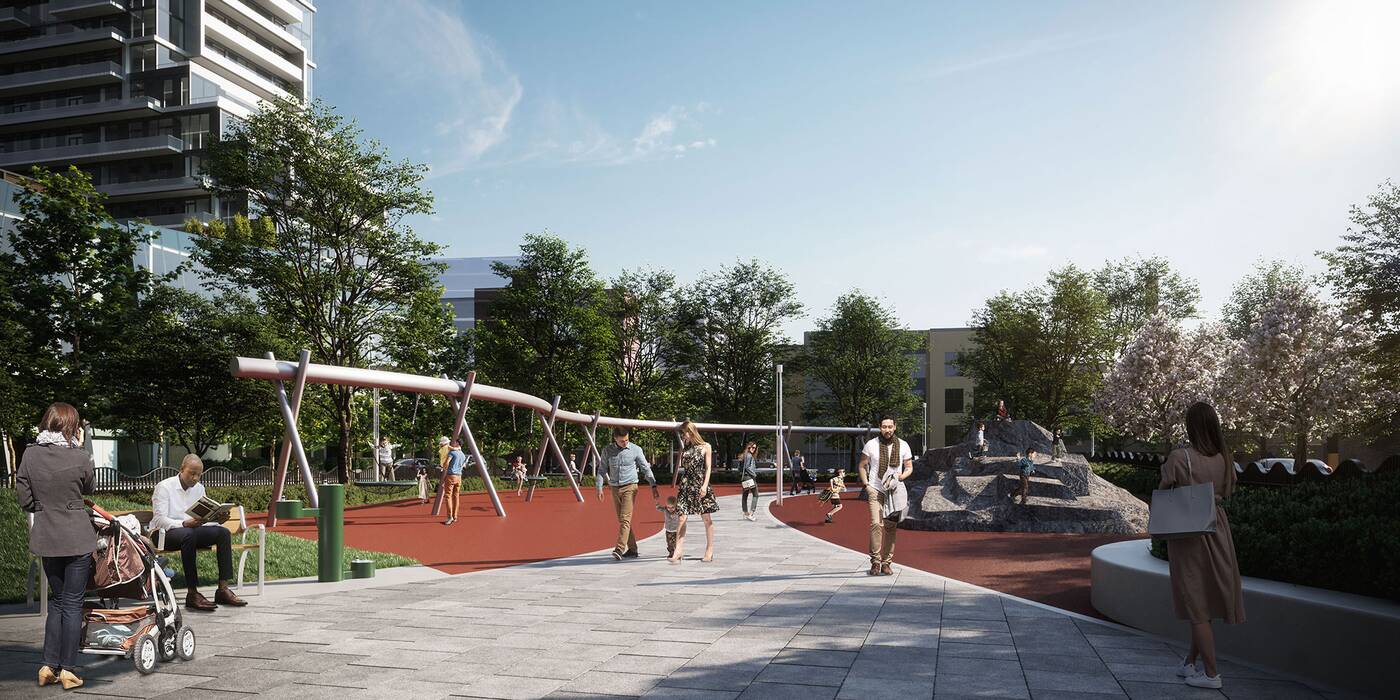 Though construction is well underway for the first two towers of the complex, work has yet to begin on the second phase that will contain the community centre, being marketed as M2M SQUARED. 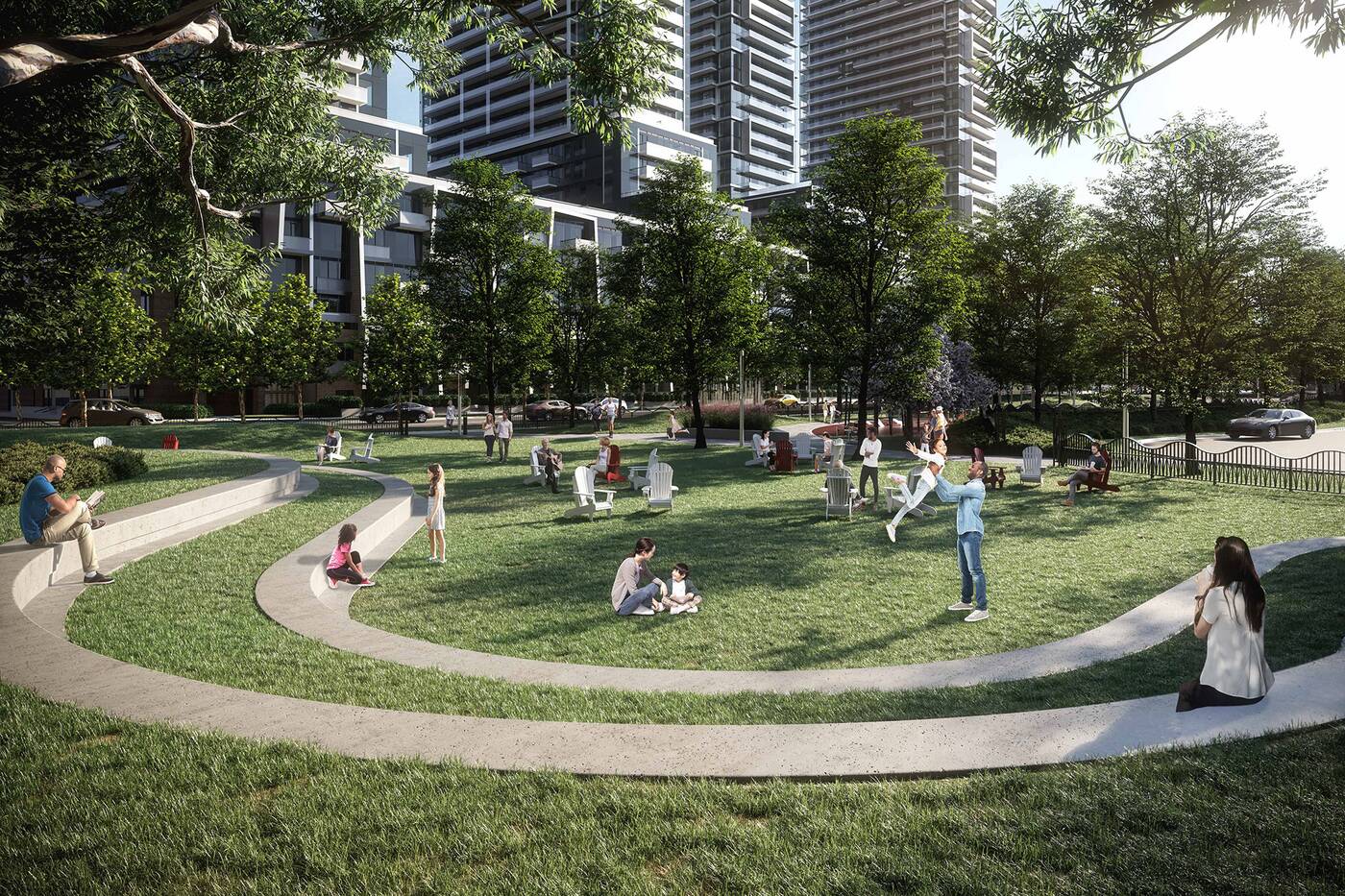 Lawn and wave-shaped seating at the new park.

Construction of this next phase is set to start next year and wrap up by 2026.