It has become an all too regular event in Toronto for aging iconic buildings to be demolished or stripped down to just their facades, and another such building is now threatened to be replaced with, you guessed it, condos.

But we could have had something grander, and much weirder if one proposed vision had gone forward.

Despite a campaign trying to halt any redevelopment of the heritage Postal Station C building at 1117 Queen Street West, Colliers International — representing the Crown Corporation that owns the land — is moving forward with the sale to the chagrin of locals.

Bids to redevelop the site have been submitted and whittled down to a shortlist, with one notable omission that didn't make the cut: A proposal that could have potentially become a new cultural gem, adding to the area's already lively arts scene.

Designed by Paul Raff Studio, the bid would have transformed the 1902-built Beaux-Arts building into part of an impressive cultural centre and arts facility concentrated with a mix of performance spaces, art exhibition areas, and a wealth of fun contributions that would have plugged in perfectly with the Queen West vibe.

This architecturally bold bid would have preserved the post office in its entirety while adding a ghostly inverted double of the building above, floating like a mirage above Queen Street. Even just the two-dimensional renderings are enough to elicit a record scratch sound effect from your mind's speakers. 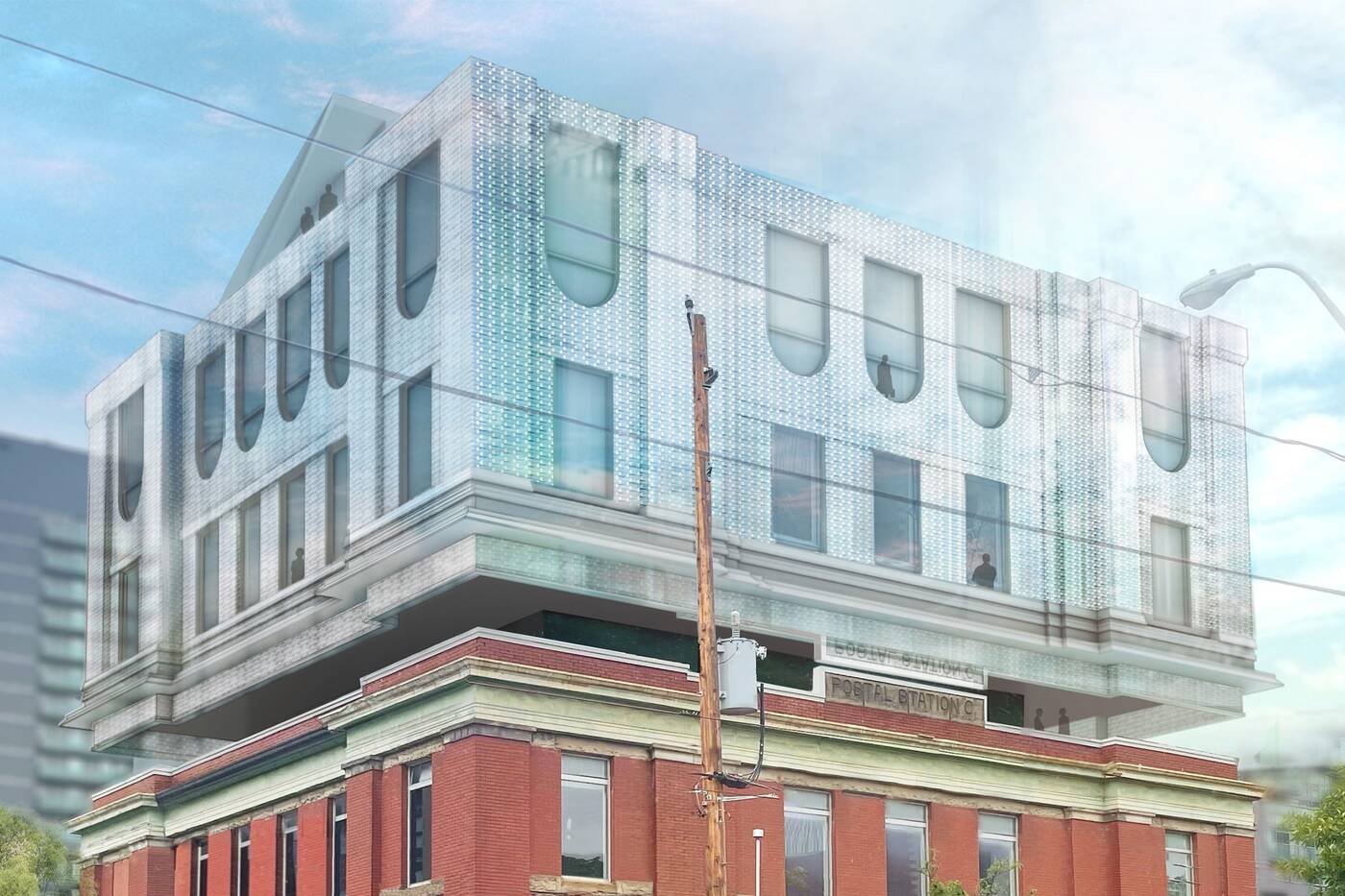 Artist and award-winning architect Paul Raff tells blogTO, "the people that hired me to do the concept wanted to create an arts hub that had a real locus to it. A place where arts organizations could have offices, meeting spaces, performance facilities, studios, a food and beverage component — all of these densely concentrated right within the hub of the Queen Street West district."

On his approach to designing the since-shelved bid, Raff says, "I tried to take the existing post office and replicate it, EXACTLY in brick. It's already clay brick, but we did [the ghost above] in glass brick. It's just that same form, but abstracted."

"By reflecting the building, it resonates with the existing in a way that makes you appreciate it more. Like how looking at something from a distance, in a picture, or reflection gives you a bit more perspective and see it anew. That what this mirage is supposed to do."

The south side of the building takes on a completely different form, with a curving, sculptural approach. 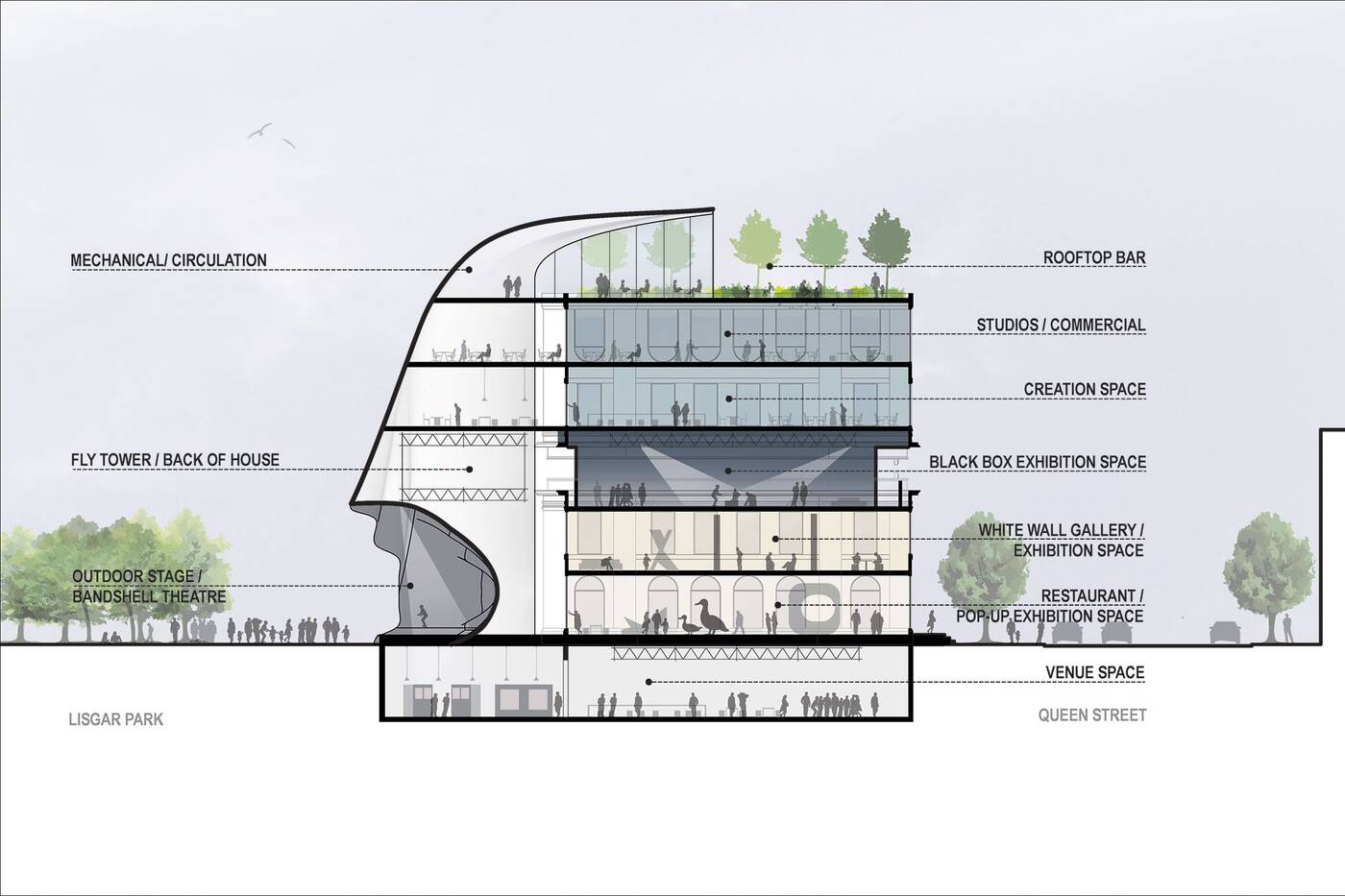 Together, the bid would have turned one building into a trio of distinct identities and a bulwark against the cresting wave of monochromatic condos overtaking the area.

Raff says the area is "home to tens of thousands of condos and is being swallowed up by modern, generic development. [Our bid] not only complements and counteracts it architecturally but does so for the creative life in the city. That creative life wouldn't just be displaced by this development."

A petition to save the building is fast approaching its goal of 2,500 signatures, not the first time a grassroots campaign has pushed to preserve a Toronto post office building.

One example is the former Postal Station K in Midtown, largely demolished in 2016 with its outer walls retained at the base of a luxury apartment tower. 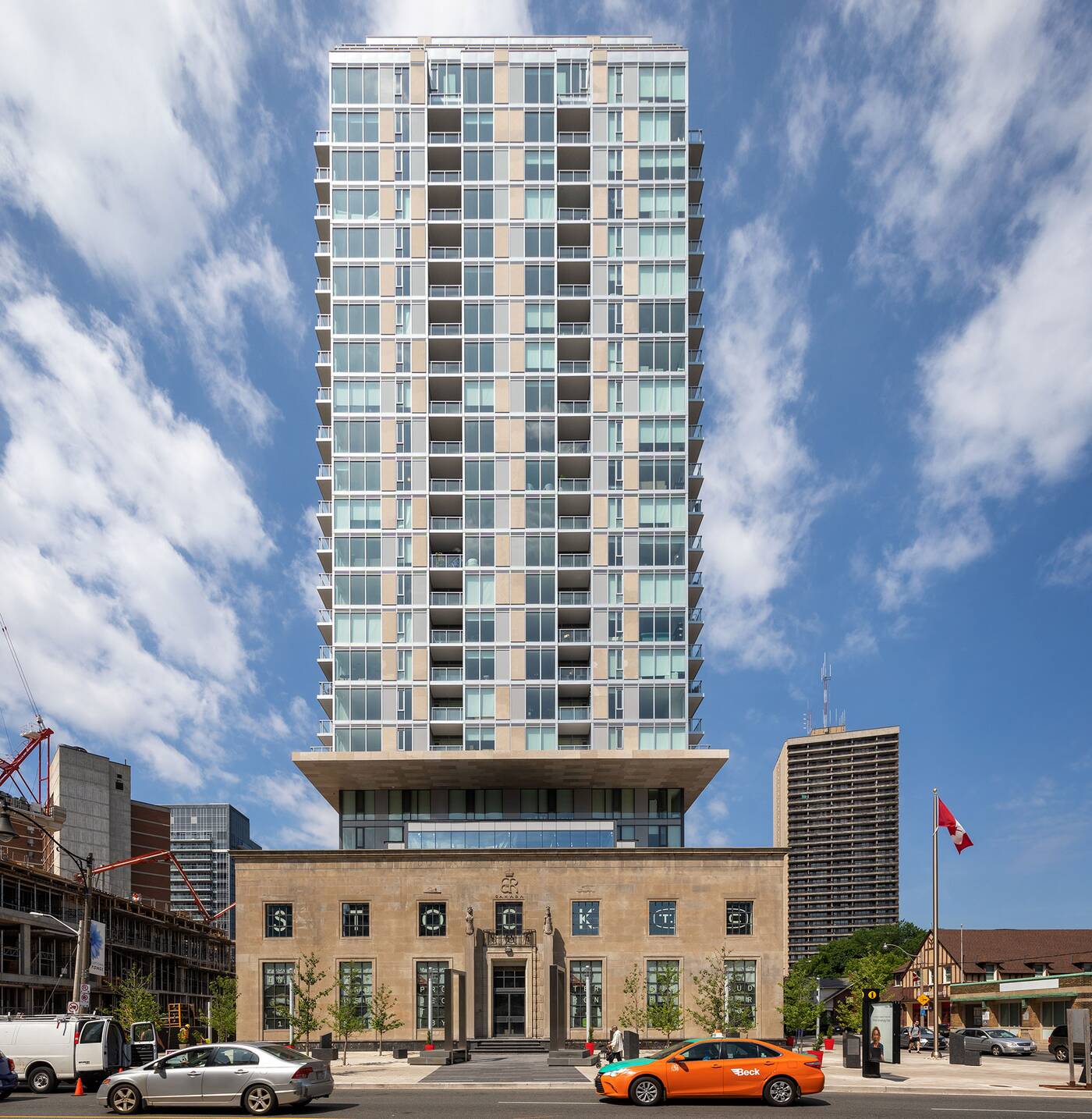 Postal Station K's outer walls live on at the base of a luxury apartment tower on Yonge Street north of Eglinton. Photo by Jack Landau.

These "facadectomies" are very common in Toronto, but Raff saw the Queen West site as a prime opportunity to diverge from the norms, explaining "that station has a lot of similarities [with Postal Station C]."

"It's on a major street, a two-storey building with very dignified, restrained architecture that isn't too ornate. It's helpful to show deference to the architecture, but nonetheless, [new additions] undermine the character and integrity of the building," he says.

"The thing above it is obviously huge, and the engine of the building. It's a different use and form, and it ends up making the postal station seem themey."

When pressed on the fate of the site, Raff admits that the demand for new condos and apartments can't be ignored as the city's population swells.

"We need more housing, but Toronto has a very big footprint as a city and has a lot of areas that could stand to double, triple, or quadruple their density no problem. It doesn’t need to be this one very small site, where you have an opportunity to do something you can't do elsewhere in the city."