The iconic Kim's Convenience store is for sale in Toronto

For less than a third of what an average downtown Toronto condo would set you back, you could own a legitimate piece of Canadian TV history — as well as your own bustling and beloved convenience store in Moss Park.

That's right: The actual store that serves as the exterior for Kim's Convenience on the award-winning CBC sitcom is officially for sale, for less than $200,000.

It's great timing, considering that the wildly popular show is set to air its series finale this evening.

"What a rare find! Famous Kim's Convenience," reads a newly posted real estate listing for the small commercial property at 252 Queen Street East. "First time in the market after 35 years." 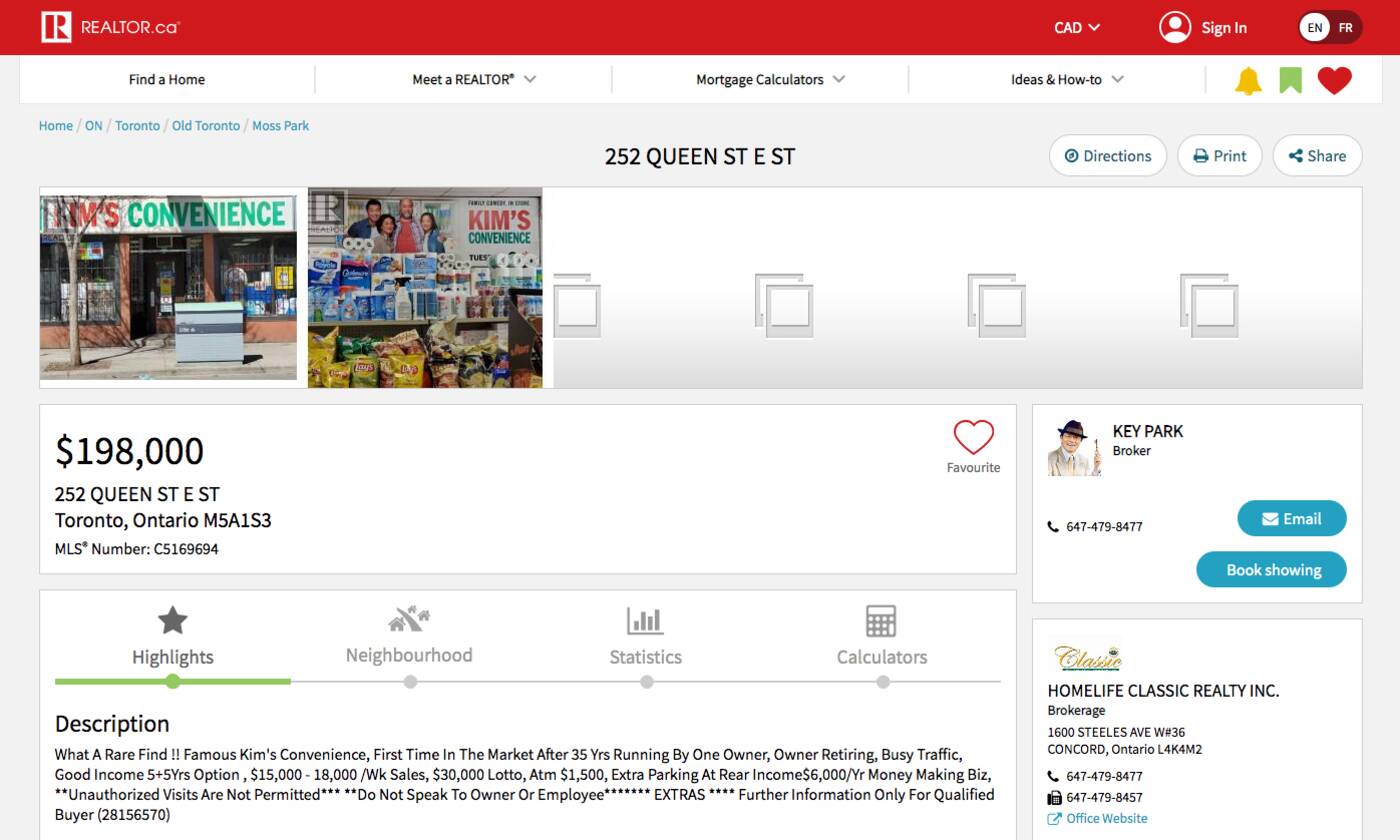 The Toronto business used to film exteriors for the hit TV show Kim's Convenience just hit the market at $198,000. Image via realtor.ca.

Fans who were crushed to learn last month that Season 5 would be the last for Kim's will surely be interested in checking out the property, which has been associated with the show since it premiered in 2016.

They should resist that urge, however, as "unauthorized visits are not permitted."

Real estate broker Key Park could not immediately be reached for comment, but noted that further information on the property is available only to qualified potential buyers, and that interested parties should not speak about it to the owner or any employees at the store.

For the record, actor Paul Sun-Hyung Lee appears to be fair game if he's in the area.

What a big sneak attack by Appa today!! We were going to surprise our 9 year old son Nathaniel by taking him to the store. We all got surprised at the end because we met Appa inside. Best day ever!!! #KimsConvenience @bitterasiandude @drewly77 pic.twitter.com/yF0zlIqI4V

What we do know about the Moss Park store, based on the listing, is that the shop itself has been run by the same owner for the past 35 years.

The owner is retiring, according to Park, which is why the roughly 1,680-square-foot store is being sold. The location is said to have high foot traffic, a rear parking spot and solid sales figures of up to $18,000 a week.

No interior images are included with the listing, and it's important to note that the colourful shop we watch Appa and Umma run on TV is actually a film set (one based on this very convenience store, but a set nonetheless.)

Taking a little trip down memory lane as we head towards the final episode, starting with everyone's favourite – BLOOPERS! 🤪 pic.twitter.com/9TLjkyhxyC

Originally called Mimi Variety, the business actually changed its name to Kim's Convenience just for the television show after producers scouted it as perfect exterior.

It's been more than seven years since set designers changed the sign, painted a new mural, and even created the appearance of a fake residence above the store to look like the Kim family's apartment.

It has functioned as a regular working convenience store the entire time, albeit one that has become popular for people to come and take photos of / selfies with.

I'm so happy to be in Toronto right now because one of my favorite tv series on Netflix, @KimsConvenience, actually has the real Kim's Convenience store! I finally get to see it! 😁😁😁🇨🇦🇨🇦🇨🇦 pic.twitter.com/o4MPw2F3BY

Many of the stars are already working on exciting new projects (including two spin-off shows revolving around the characters of Kimchee [Andrew Phung] and Shannon [Nicole Power].)

As for the iconic store in Moss Park, it will likely continue to excite anyone who passes by on the Queen streetcar for years to come, regardless of who buys it (as long as they keep the name.)

Beloved Toronto bakeshop building is for sale for $4 million