Though condos in Toronto had a bit of a lull last year as far as prices and sales volumes were concerned, things have picked up to meet the rest of our real estate market, which keeps on heating up with dozens of offers, all-out bidding wars and record high prices.

Given that the city is one of the top five least affordable in the world and that the average price for any type of home within our bounds just hit nearly $1 million last month, it's getting progressively harder to find any residence for under $500,000, even the small condos that people were scrambling to sell just months ago.

Thankfully, there are a still a few deals to be had, even right downtown — like these 10 one-bedroom units that are currently available, all of which are more than or just shy of 500 square feet, to boot. 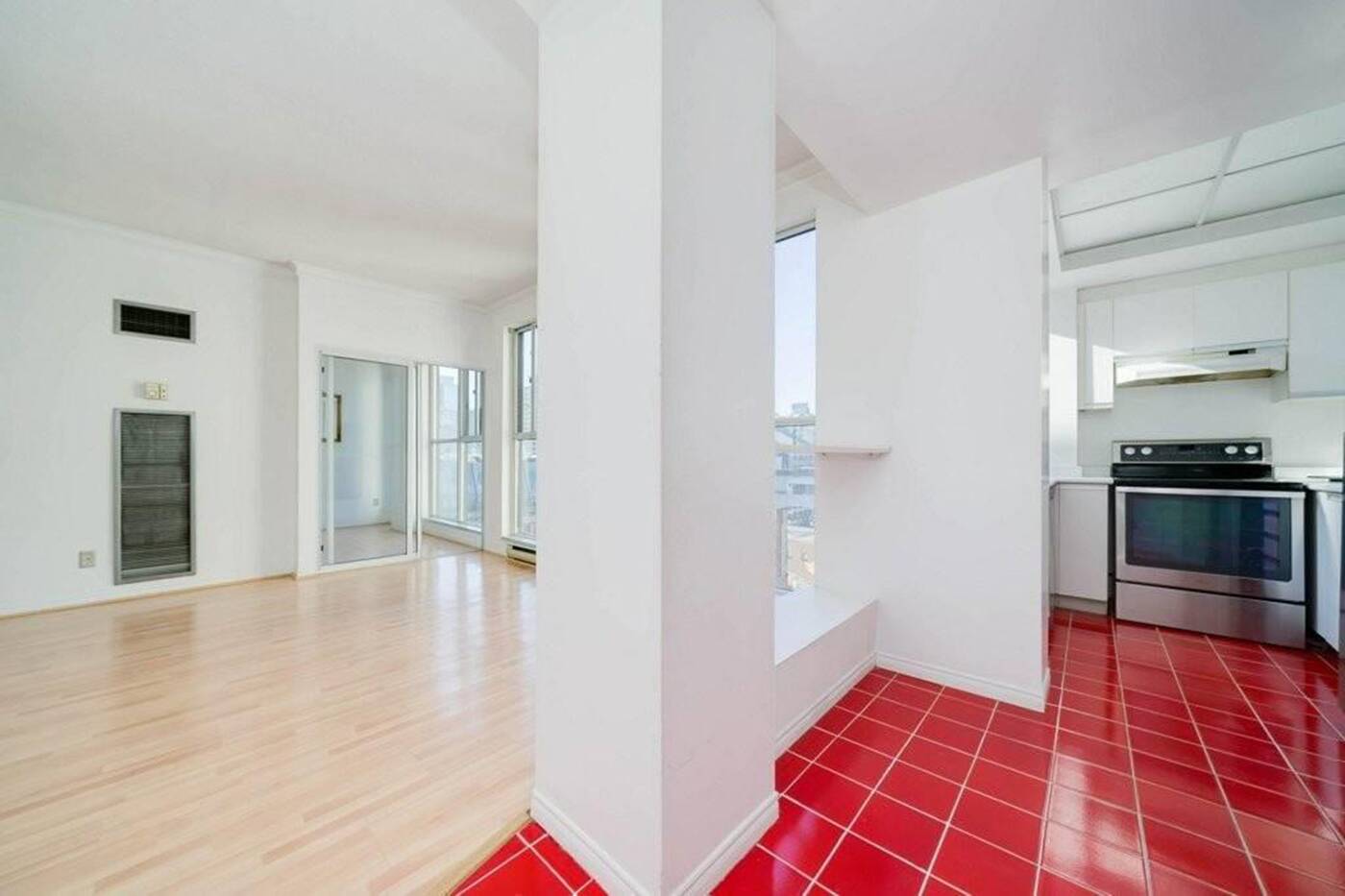 This sprawling 1+1 bedroom condo in the St. Lawrence Market area is certainly a steal at $499,900 for 728 square feet of bright, airy living space with unimpeded views from the 11th floor and a walk-through closet.

Drawbacks include fairly high maintenance fees — $748.50 a month — plus no outdoor space and a cramped kitchen that could use a reno.

Other parts of the unit could also use a bit of the facelift and appear to be unchanged from when the building was constructed 30 years ago, but for this price, it may be worth the time, effort and extra cash to do so. 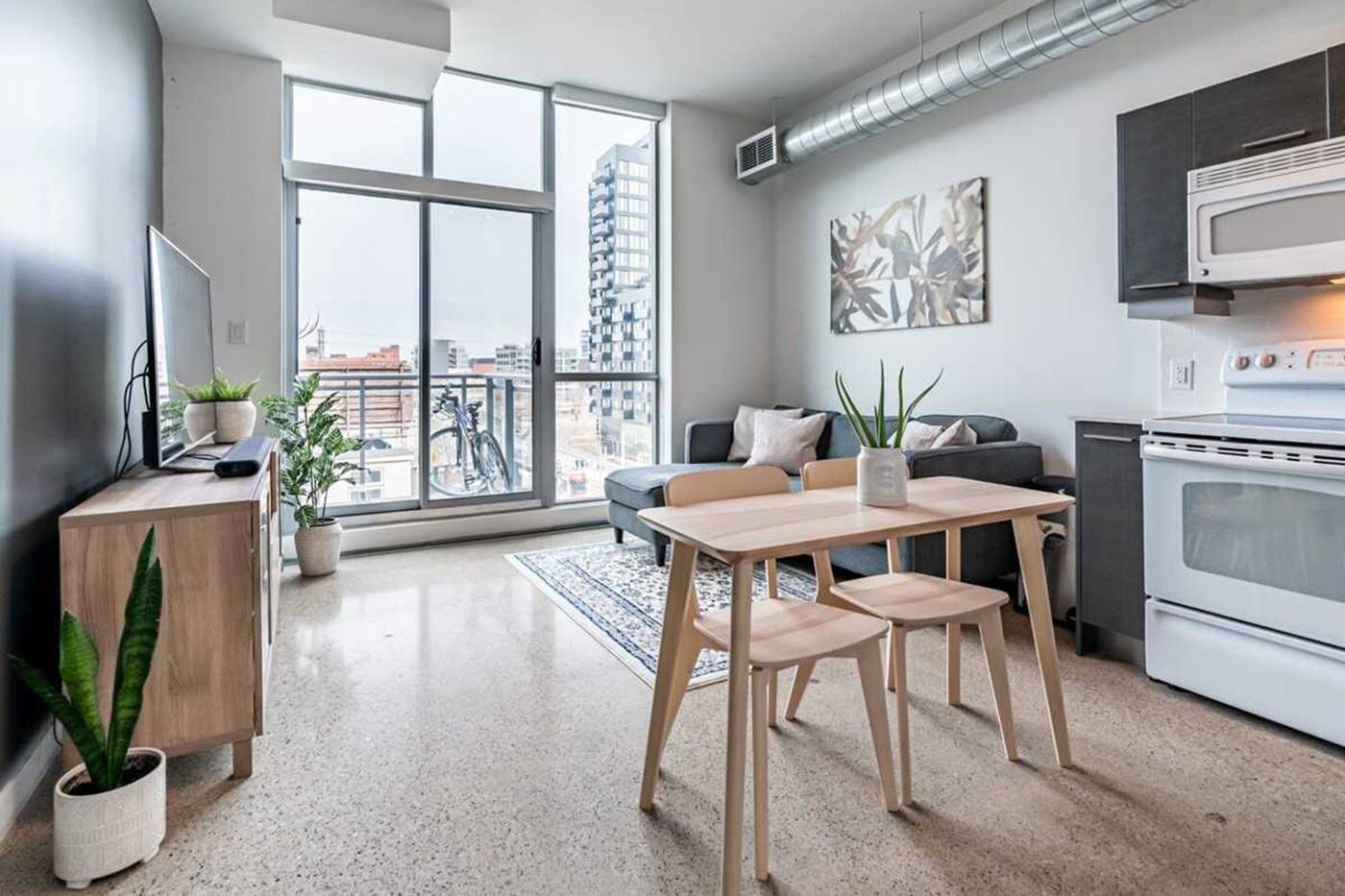 This $499,000 loft-style unit in Corktown will be what you're looking for if you want exposed ductwork and high ceilings without the hard loft pricetag.

The layout is simple, but functional for 472 square feet, with space for a table and chairs or an island off the wee kitchen if you wish, and a balcony with stellar views of the area.

The building, just steps away from the Distillery District, is newer than most others on this list and it shows, and maintenance fees are an easy $330.88.

But, the fact that the bedroom isn't walled off makes it feel a bit like a studio, and less like an actual one-bedroom. 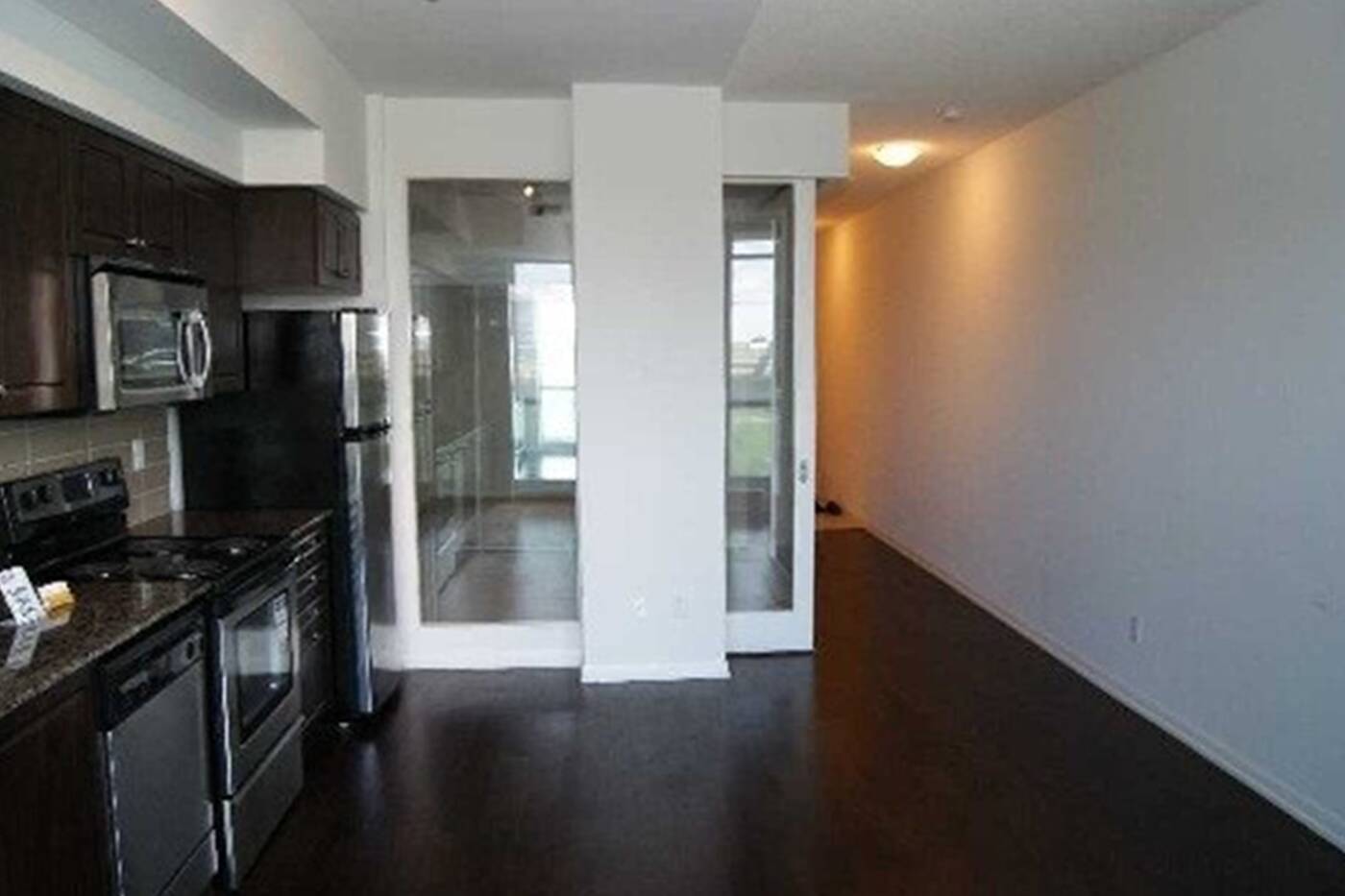 If you want to live in the CityPlace or Fort York neighbourhoods, you're likely going to be looking at some pretty cookie-cutter units as far as the layout is concerned, and this $499,900 condo is no different.

The bedroom is unfortunately one of those "let's divide a portion of the living space off with glass partitians and call it a separate room," but at 548 square feet total, it's still enough space for one person.

The view of the Gardiner, though maybe a bit noisy, is far perferable to one of another condo directly next to you, and is a perk of this unit — along with the super cheap maintenance fees of $377 a month to enjoy use of an indoor pool, gym, sauna, rooftop deck, and more. 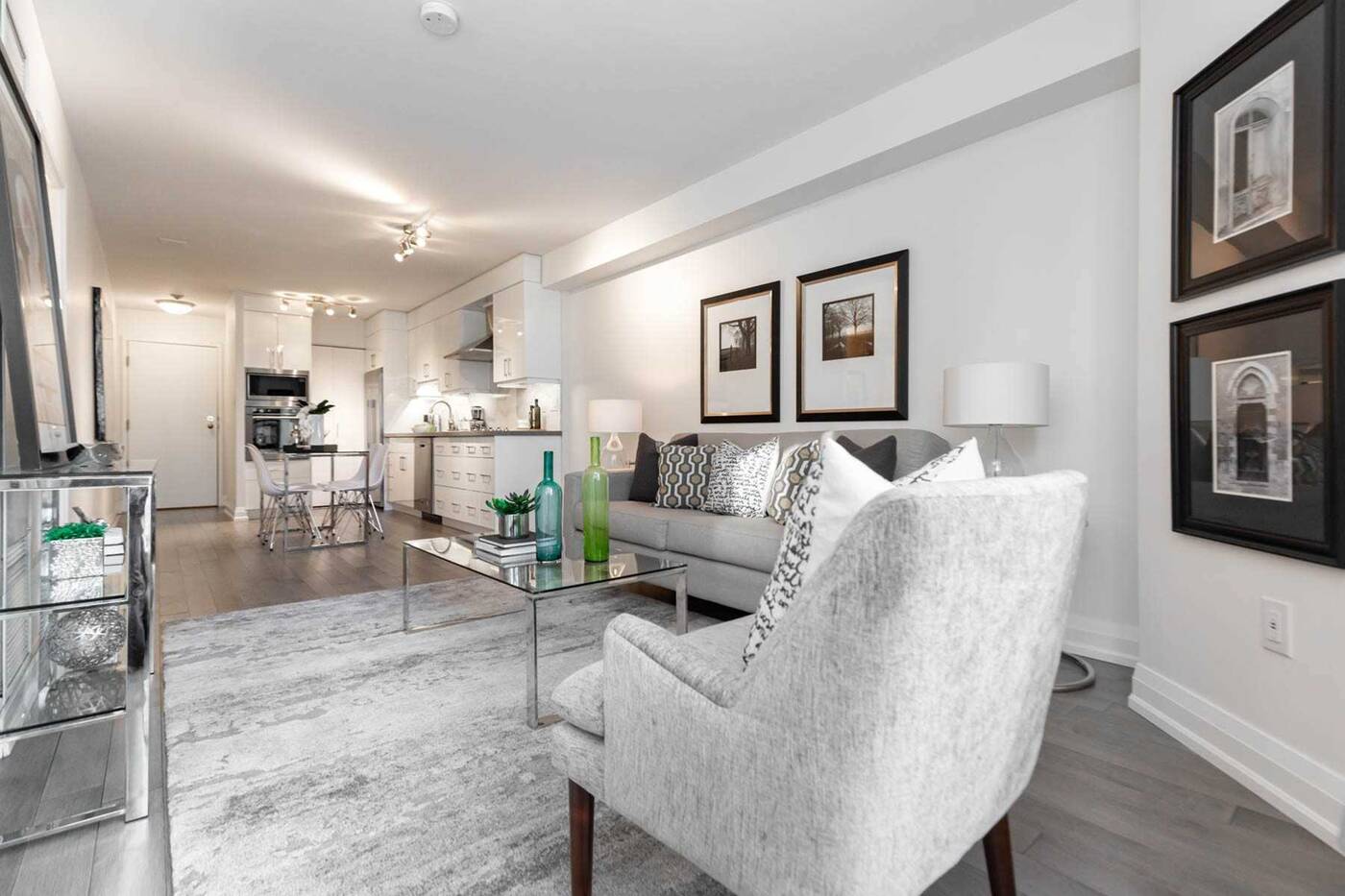 This $500,000 condo just north of Wellesley and Bay in the Bay Street Corridor also has a pretty standard condo layout, with the kitchen along one wall, living room abutting the windows and bedroom off to one side, but with a few minor architectural variations thanks to the fact that it's an older building.

Maintenance fees are decent at $435 for 545 square feet, and the home feels bright, open and definitely newly renovated with beautiful stainless steel appliances.

No outdoor space, but the views seem pretty good, again, not staring directly at another building. 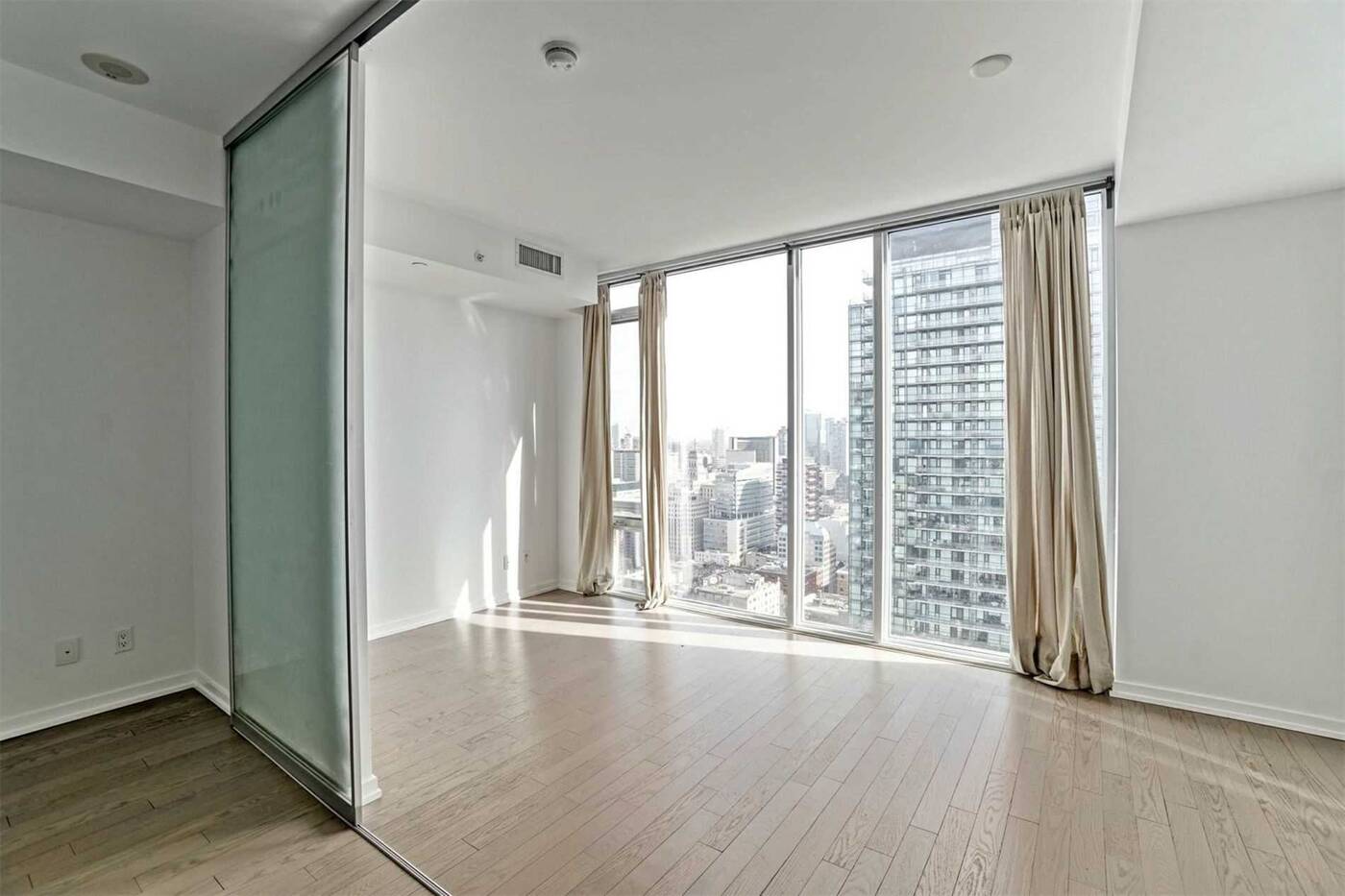 Yes, another of these new skyrise buildings by a developer who has a very hilarious concept of a "bedroom," but it's bright and cheap and well-located, and maybe that's all that matters.

Right downtown at Adelaide and Peter, this place is only slightly shy of 500 square feet, and has some awesome skyline views from the 33rd floor.

The kitchen is pretty basic, but is all new and has everything you need, as the unit does in general  — which for Toronto, is rare for $499,000 and just $328.45 in maintenance fees. 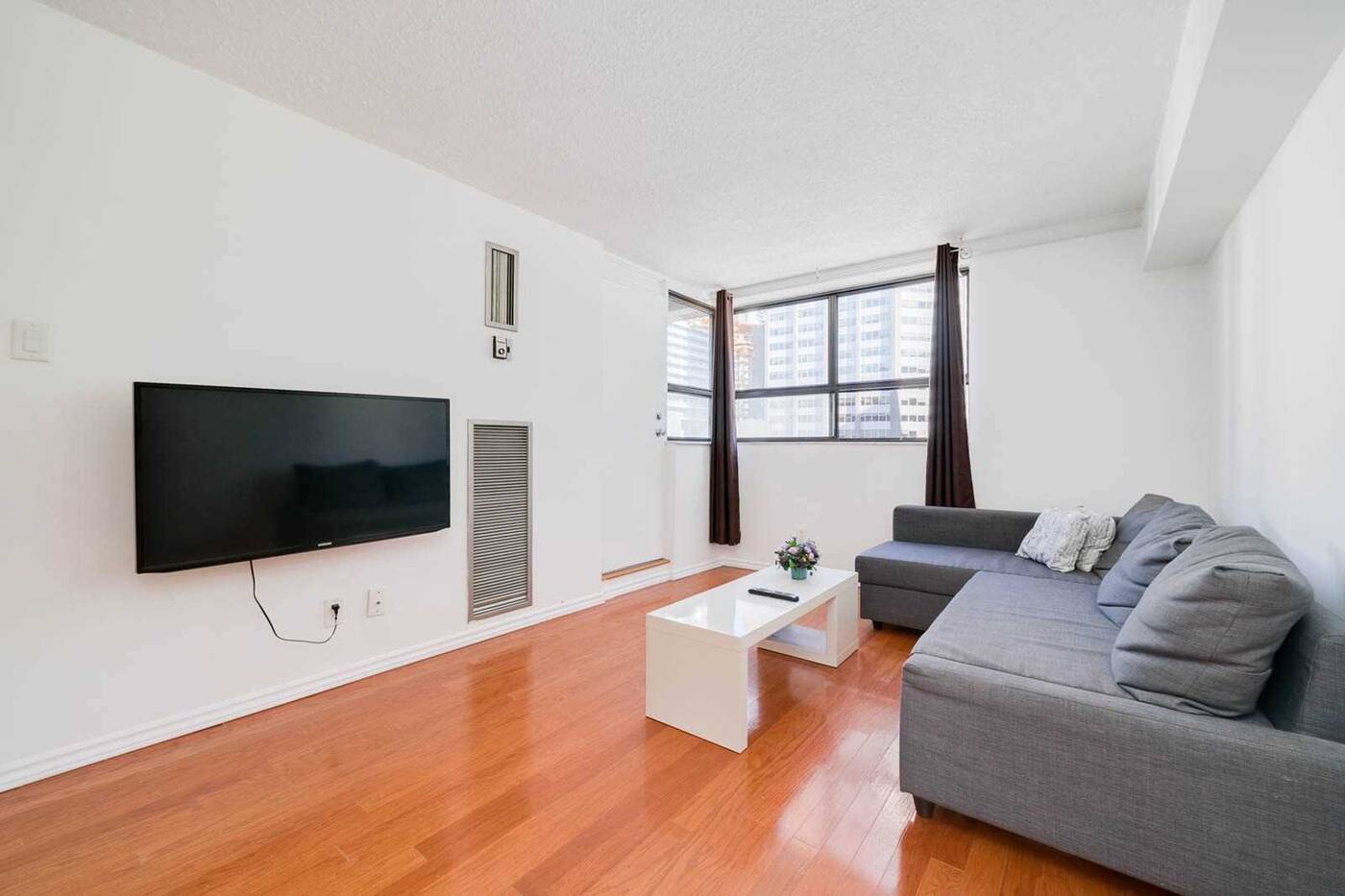 Though the exterior leaves a bit to be desired given the obvious age of the development, the units in the Village by the Grange are priced extremely well for first-time homebuyers, especially given how perfectly located they are in the heart of the city.

Just minutes' walk from Chinatown, OCAD, Kensington Market, Queen West, Yonge-Dundas Square and The Eaton Centre, this $479,900 unit has somewhere between 500 and 599 square feet of living space, as well as a balcony and ensuite laundry (which is rare for the building, though not for a condo in general in this day and age).

The interiors are admittedly extremely bare bones and even a little bleak, so would need a decorator's touch — but the price, location and fairly affordable $551.25 maintenance fees may stir up some inspiration for what the space could be, even the tiny little bedroom. 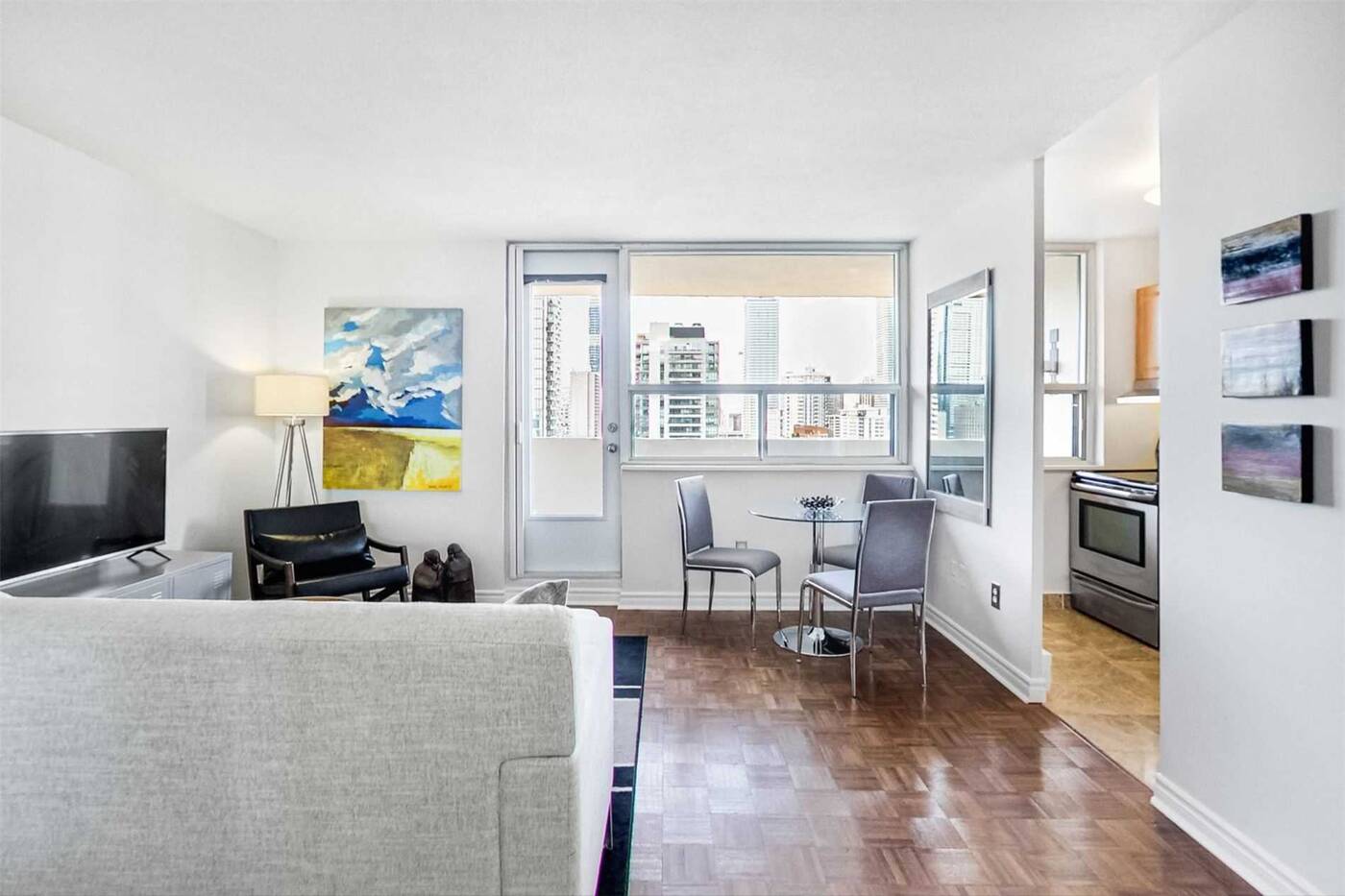 Another unit that will take getting past the unattractive, old exterior to appreciate the gem inside: this $489,000 spot near Carlton and Sherbourne.

The spacious balcony with killer views of the city are a key selling feature for this one, while things like the parquet floors and warm-toned decades-old kitchen cabinetry likely won't be.

The layout feels a little cramped for the 567 square feet the condo actually is, but the bathroom appears newly renovated, and the place even comes with its own parking spot, which usually adds well over $50k to the price. 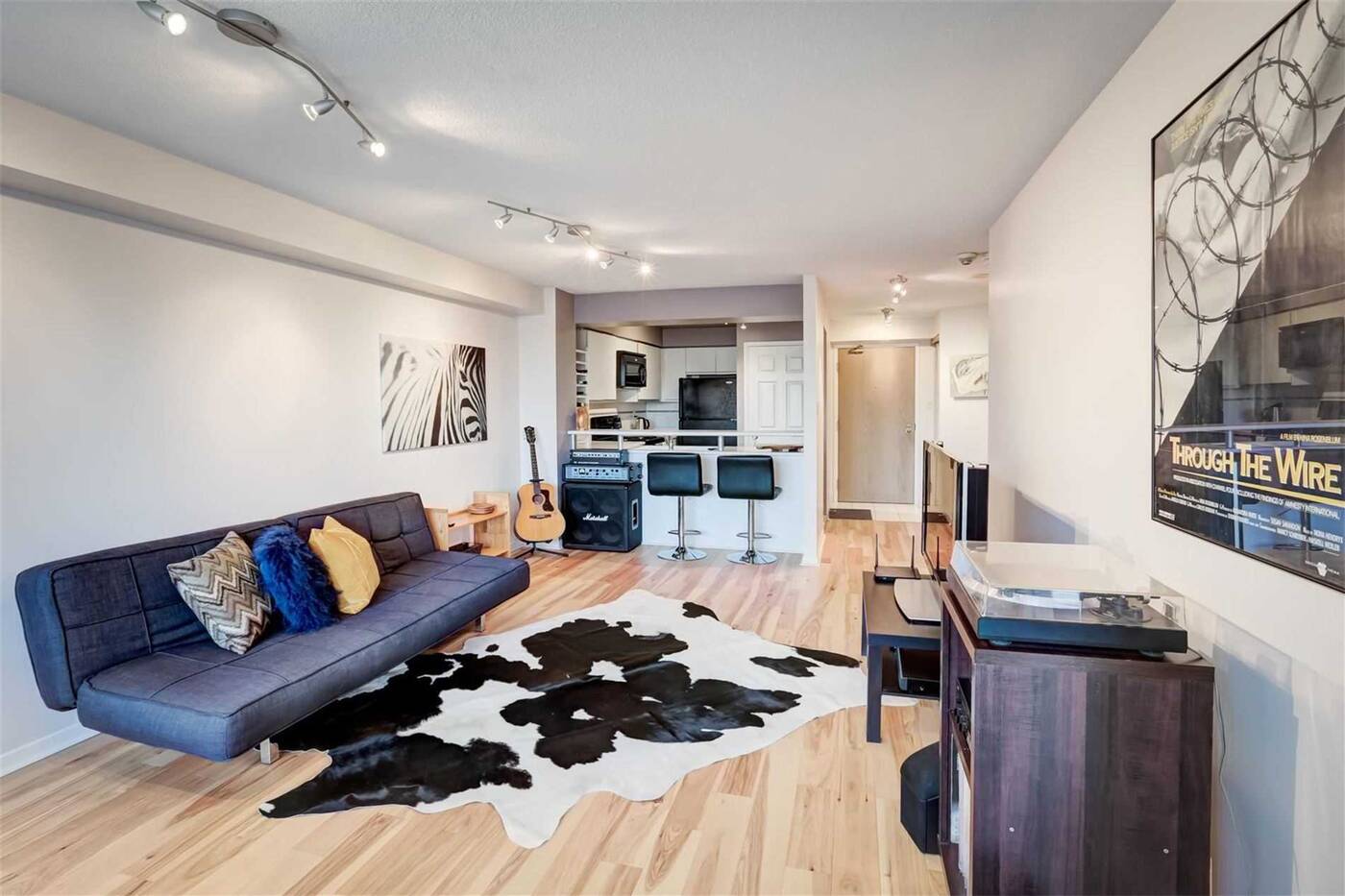 Another inexpensive, large one-bedroom unit with parking — are we dreaming? (And it's actually a one PLUS one, to be exact.)

Something about the way this unit near Allan Gardens is decorated feels very '90s sitcom for some reason, but it's kind of working for her.

Sure, the kitchen may need a bit of a gutting, but the 710 square feet of space — including a funky home office — may make that worth it for the $469,900 price tag.

Other downfalls include the lack of balcony and the maintenance fees, which at $946.30 are way more than most one-bedrooms. 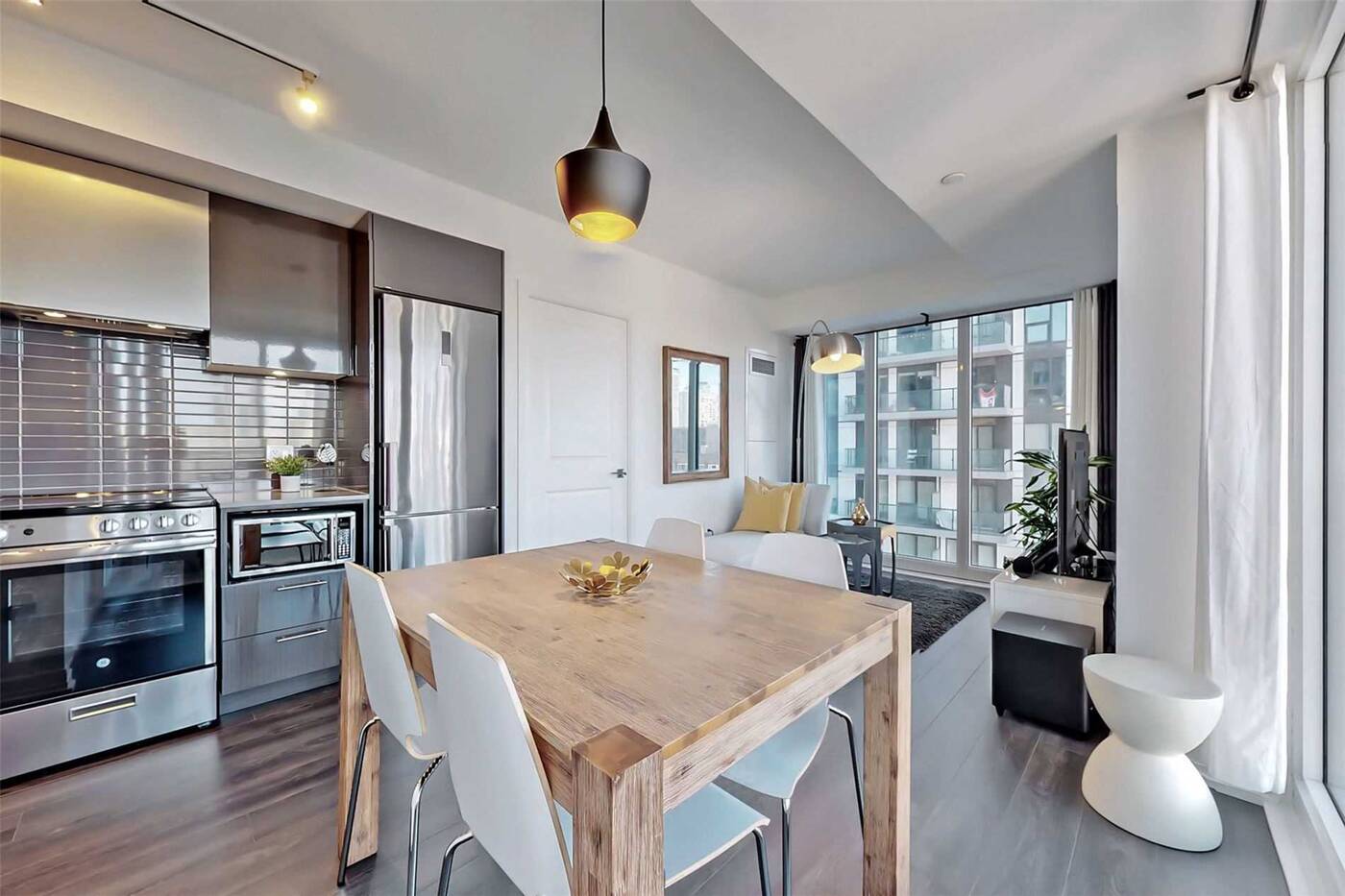 This corner unit for $499,900 is pretty damn adorable and comes with a balcony and breathtaking cityscape views from two sides of a brand new building — as in, not even one year old — in Cabbagetown.

At 484 square feet, it's quite compact, but feels simultaneously cozy and bright thanks to all of the natural light. It's staged well and thus probably shows well, making it easy to picture yourself at home, so long as you don't have too many belongings. 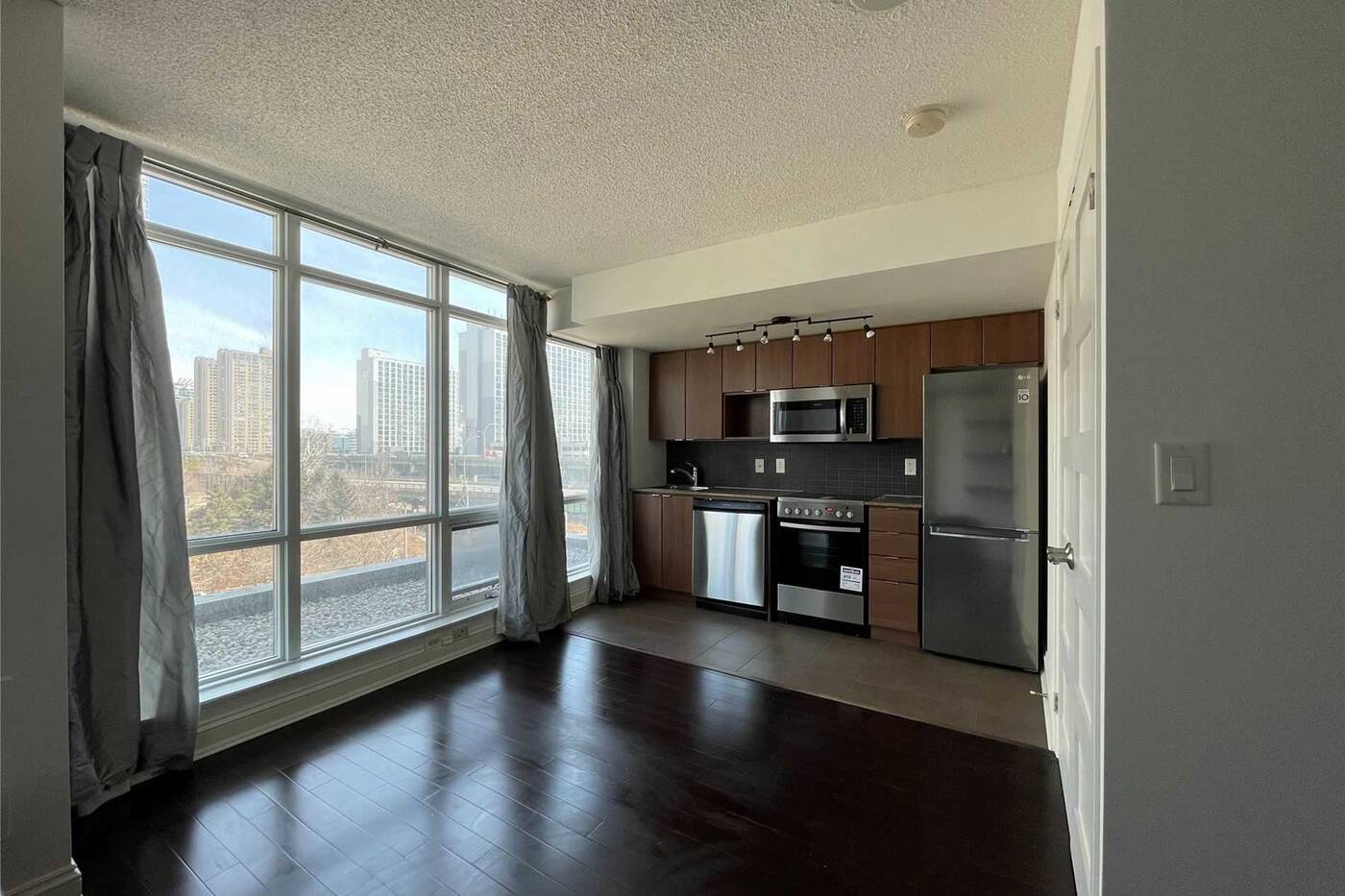 Following the cutest unit on this list is perhaps the most meh, but also the cheapest — this CityPlace shoebox for $449,000.

It's a livable space, but nothing to write home about, at 468 square feet with all of the baseline fixtures.

But, the views of the CN Tower and the railroad tracks are pretty great, the bedroom is actually its own enclosed room, maintenance fees are super low at just $309.53, and it has a lot of potential to be someone's little home in the downtown core.