In a new report that will shock absolutely no one, Toronto has been ranked among the five most expensive cities for real estate in the entire world, along with fellow notoriously pricey Canadian locale, Vancouver.

A new report, which looks at average income versus housing prices in a given place, found that housing affordability worldwide continued to deteriorate throughout the pandemic, with the Urban Reform Institute and Frontier Centre for Public Policy finding only four of the cities assessed could be fairly deemed "affordable" for their own residents.

This is why buying a house in Toronto is so expensive https://t.co/p3inJApacu #Toronto #RealEstate #TorontoRealEstate pic.twitter.com/Cet6a7c9dV

Toronto, which came in at number five on the list, is considered to be "severely unaffordable," a category for those markets found to have a price-to-income ratio of 5.1 or more.

Toronto was also found to have the second largest jump from last year's numbers, up another 1.3 points, meaning that housing prices have risen dramatically, and median income in the city has not kept up.

Study on Housing affordability globally. Shows #Canada 🇨🇦 as basically unaffordable in every city. #Montreal, #Ottawa & #Toronto with the greatest negative change since 2004. Not great globally either. https://t.co/i3oFJoYl7u

Canada is the only country with two cities in the top five this year, though the U.S. has two in the top ten: San Francisco, at 9.6, and San Diego, at 8.0.

As the data indicates, the trend is not anything new, and has been ongoing —and worsening — for some time.

"The number of housing markets that have become severely unaffordable in the United States and Canada has grown steadily since 2004," it reads, adding that "housing affordability has deteriorated the equivalent of six years of annual household incomes in Toronto" from 2004 to 2020. 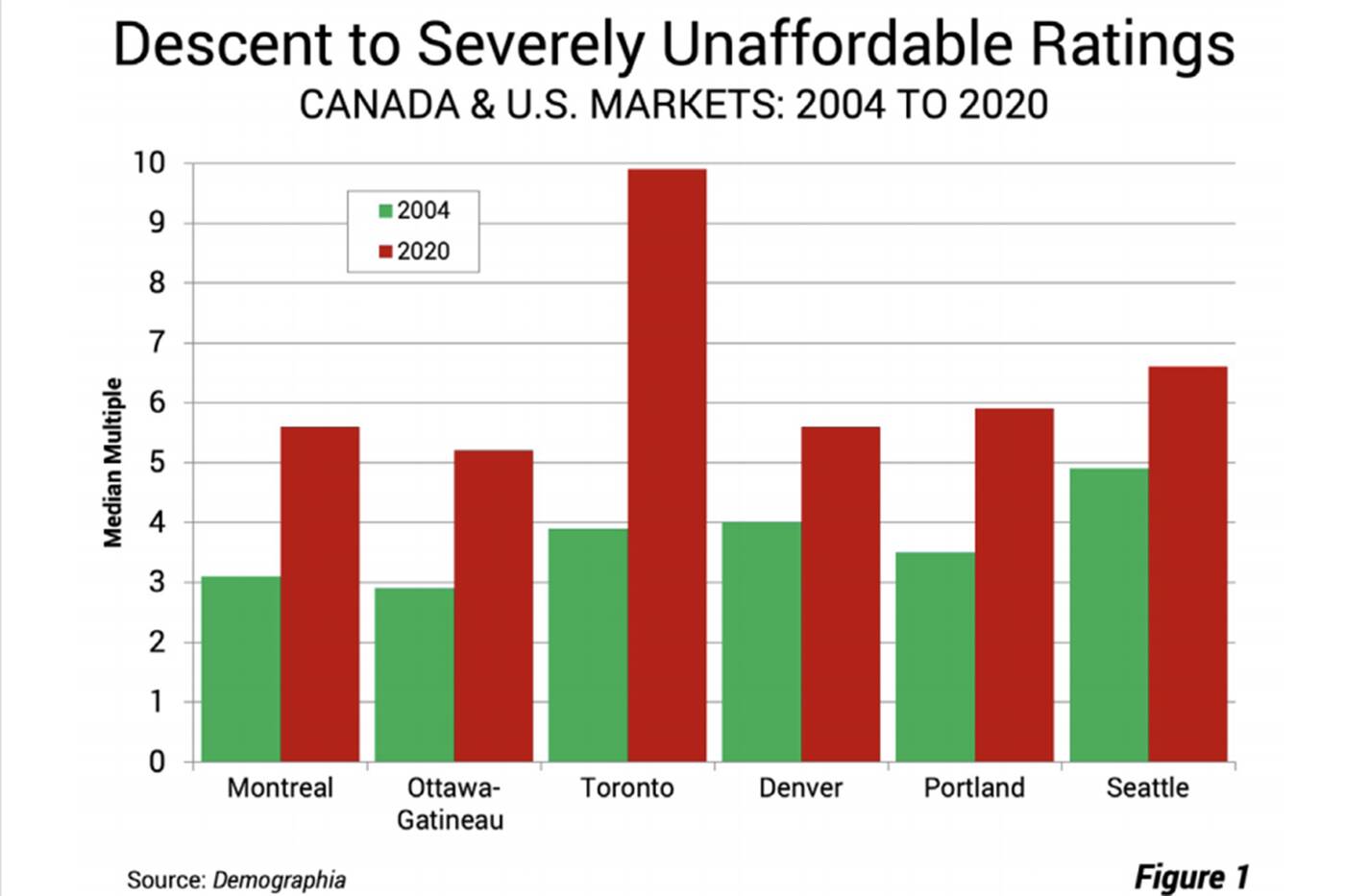 Toronto's housing affordability problem has worsened quicker and more dramatically than any other market analyzed in the continent. Chart from the Urban Reform Institute and Frontier Centre for Public Policy's Demographia International Housing Affordability report for 2021.

Over time, major cities around the globe have become untenably pricey for their average citizen, and the divide between metropolitan areas has also been widened.

"Before, there was relatively little difference in housing affordability measured against incomes among housing markets," the report says.

Other stats have shown you now need to have an annual household income of at least $178,499 to afford to enter the Toronto market, with the average price for a detached home in the city now more than $1.5 million.

But rents are dropping... I see a bubble burst in the very near future.

As prices continue to go up to ridiculously overvalued figures, some are still lying in wait for the bubble to burst, if that ever happens. With Toronto named the only North American city on the verge of a housing bubble late last year, anything is possible.