Thinking about purchasing a house in the City of Toronto? Congratulations! I hope you have an extremely lucrative job, or at least a well-paying job plus a partner who also makes decent bank.

According to a newly-released Housing Affordability Report from the National Bank of Canada, you currently need to have an annual household income of at least $178,499 to afford a "representative home" in the Toronto market.

"Housing affordability in Canada improved in the fourth quarter of 2020, marking a third amelioration in a row," reads the report, released on Wednesday.

"That said, the improvement this quarter was much less impressive. Higher incomes and record low interest rates were almost completely offset by a substantial rise in home prices. Indeed, prices for the national composite rose 4.5 per cent in the quarter, the highest quarterly gain in 11 years."

With home prices and mortgage rates as they are in early 2021, a Toronto family would need nearly $180,000 of combined annual income to buy a median-priced detached house. Image via National Bank of Canada.

Lower mortgage rates have played a factor in helping affordability, which the report's authors say has "never been better since 2015."

The problem is fast-rising home prices, bolstered by demand for detached, single-family homes amid the COVID-19 pandemic.

"The rise in home prices has translated into a higher down payment. At a national level, there has never been a worse time to accumulate the minimum down payment," notes the National Bank.

"Assuming a savings rate of 10 per cent of total median household income, it would now take 60 months (5 years) to save for the minimum down payment (approximately 6 per cent) on the representative home."

In Toronto, specifically, "housing affordability moved in opposite directions by market segment in the fourth quarter of 2020." 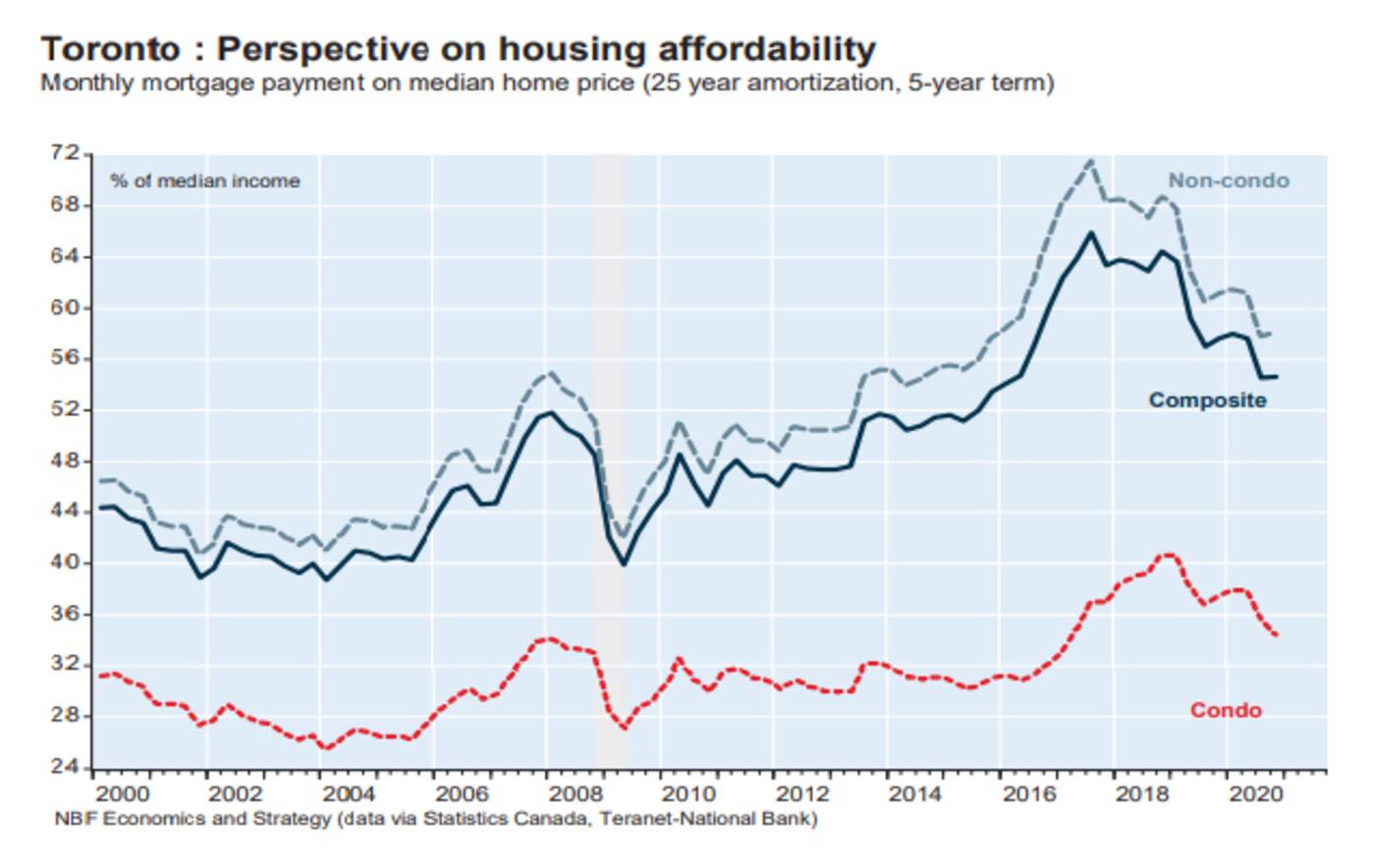 The monthly mortgage payment for median-priced homes has dropped in recent years, but not only on account of lower mortgage rates. Rising house prices are meanwhile causing minimum downpayments to soar. Image via National Bank of Canada.

Affordability has clearly declined, year over year, for what the bank describes as "non-condo dwellings," though it has become more affordable to buy a condo in the city than it was before the pandemic.

That's not to say condo prices aren't going up as well.

"The median annual income increased 1.3 per cent and interest rates declined, but this was not enough to fully offset higher home prices... The median home price for all dwellings combined increased 4.9 per cent over the quarter."