Toronto's housing market might be on fire lately but rent prices in the city have actually been declining since the start of the pandemic, dipping well below the high that tenants saw last fall.

According to the latest National Rent Report from Rentals.ca and Bullpen Research & Consulting, Toronto rents are down a whopping 14.1 per cent from this time last year.

This still makes us home to the second-highest rent prices of any major city in the country — preceeded only by Vancouver and followed by nearby Etobicoke and Mississauga — but also the largest drop in price year-over-year.

The latest National Rent Report is out. Rents are flat monthly, but down 9.5% annually. Price decline for condos & PBR in Toronto now the largest in Canada for major municipalities at -14%. Read more by @Rentalsdotca & @BullpenConsult here: https://t.co/l480SXEXre #ToRE #VanRe 🇨🇦 pic.twitter.com/9PABzlwea6

The numbers were driven by single-family homes despite the fact that the number of available condo rentals, many of them former Airbnbs, have skyrocketed in recent months by as much as 80 per cent.

Rental rates for apartments in detached, semi-detached and townhomes were, based on this latest data from Rentals.ca listings, 20 per cent lower than the same time last year (now $2,839), while condo rents fell 16 per cent in the same period (now $2,262). 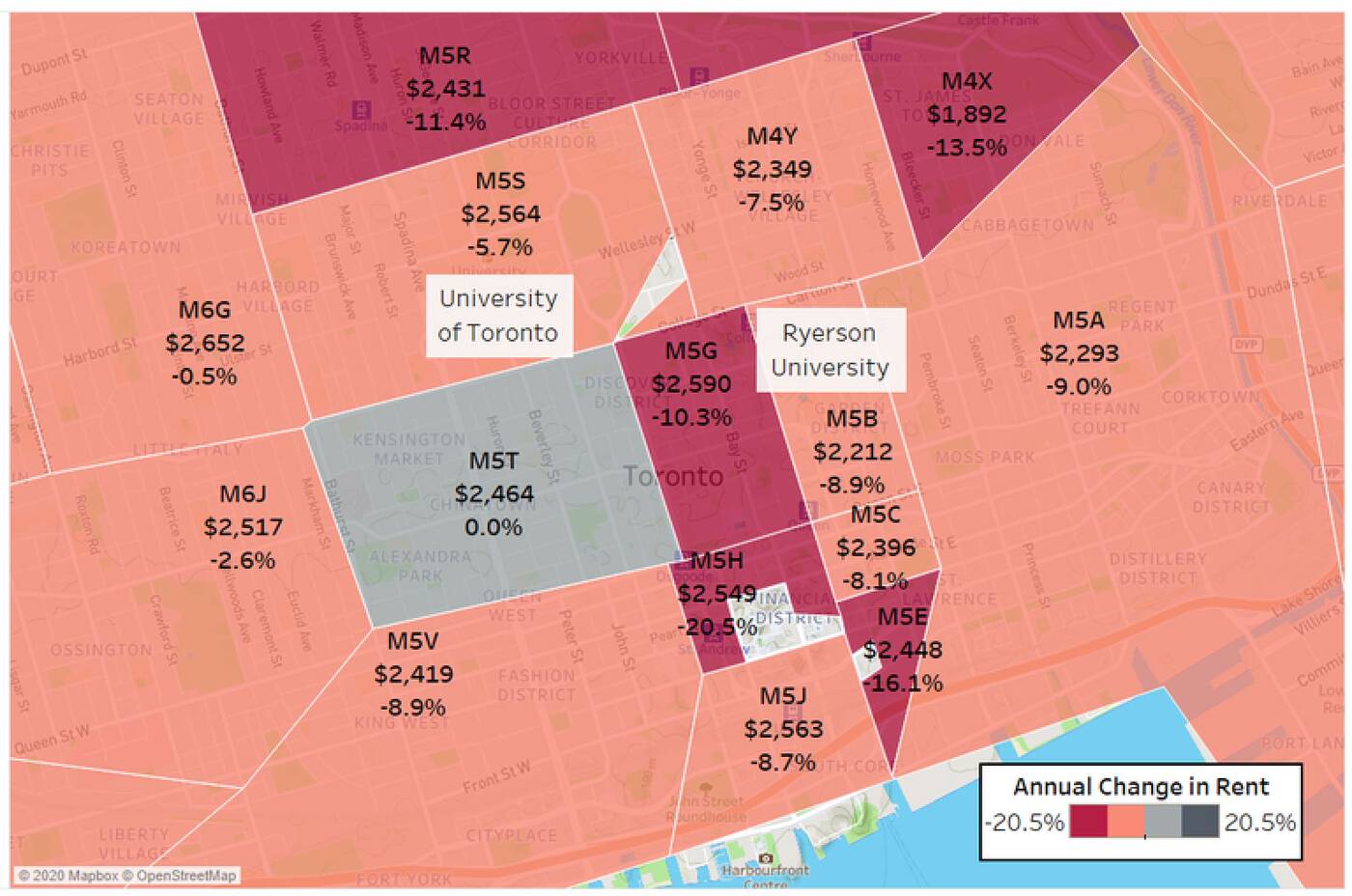 The annual change in average rent by postal code in downtown Toronto from January 2020 to August 2020.

Purpose-built apartments in the third quarter of 2020 were surprisingly down very marginally, only three per cent from Q3 2019 (now $2,122).

Still, these are some of the lowest prices residents have seen in years in one of the world's most notoriously expensive cities, especially when we're used to prices rising both month-over-month and year-over-year — and experts speculate that they will likely keep decreasing.

Rent is still too high in #Toronto and needs to come down at least another 25- 30% for 1 bedrooms. Affordable housing is a RIGHT - not a luxury. The average rent for an apartment in Canada takes big drop since last year https://t.co/QRZO4bwEbb #greed #rentals

Factors for this change include more supply, less immigration, an exodus of people moving elsewhere now that they are able to work from home instead of a downtown office, travel restrictions, relocation due to financial precarity, and an influx of former short-term rental units into the long-term market.

"There has been much discussion surrounding the drop in rents downtown due to the shutdown of many of the office towers, and a reduction in demand for short-term rentals," the report reads.