It's a lot easier to lease a vacant condo unit in downtown Toronto right now than it is to score a bigger, cheaper place in an older apartment building.

You can thank a lack of supply and sky-high demand on the purpose-built rental market for that.

Condos are nice, sure, with their sparkling amenities and abundant supply, but there's a reason most young renters would choose to live in an apartment if they could: money.

Apartments have long been far cheaper to rent than condo units of the same size, by hundreds, if not thousands of dollars. This is changing, however, as demand for more affordable housing options grows. 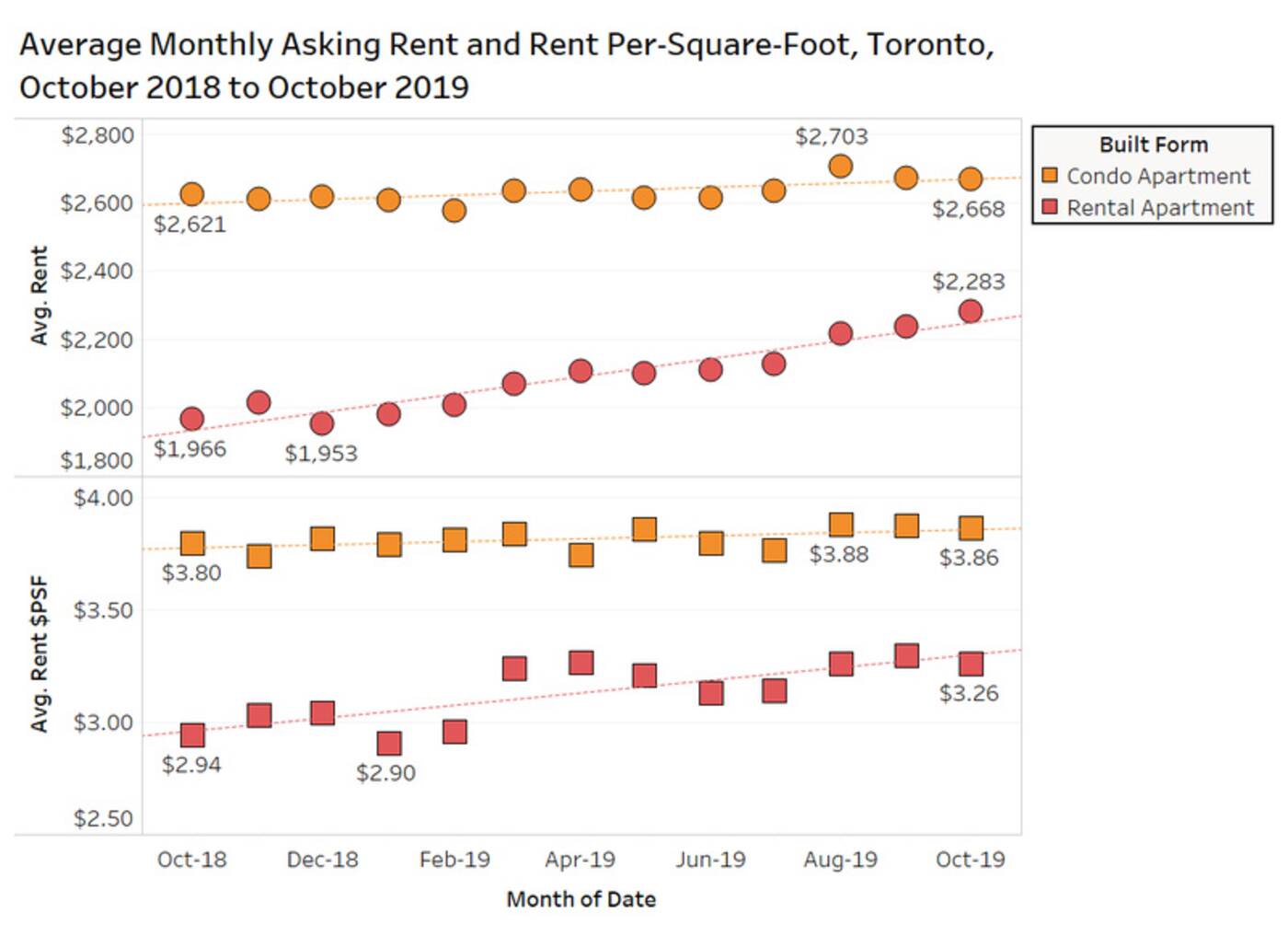 Average rents for condo units in Toronto remained pretty stable between October of 2018 and October 2019, while apartment rental rates rose steadily over the same period of time. Image via rentals.ca.

"Leased condominium apartments have typically been the domain of young professional singles and couples, and more recently younger families with preschool-aged children," reads a newly-released report on national rent trends from Rentals.ca and Bullpen Research.

"But these younger tenants struggle to have the financial ability to rent high-end properties," the report continues. "With near-record levels of population growth, a lot of residents are looking for apartments, and supply hasn't kept up."

There's no shortage of supply when it comes to condo rentals, on the other hand, and it shows when contrasting the rates of rent growth for both types of dwelling units.

In October of 2018, the average rent across all Toronto apartments was $1,966. By contrast, condominium rentals were going for an average of $2,621 per month.

That $1,966 has ballooned by a whopping 16.1 per cent over the past year to reach an average rent price of $2,383, as more and more people are turning away from the condo rental market in favour of seeking out cheaper places where they can get more space for less money.

The growth rate for condo rents, conversely, slowed to just 1.8 per cent over the same time period. The average rental condo is now said to be going for an average of $2,668 per month — still more expensive than a traditional apartment, but not by very much. 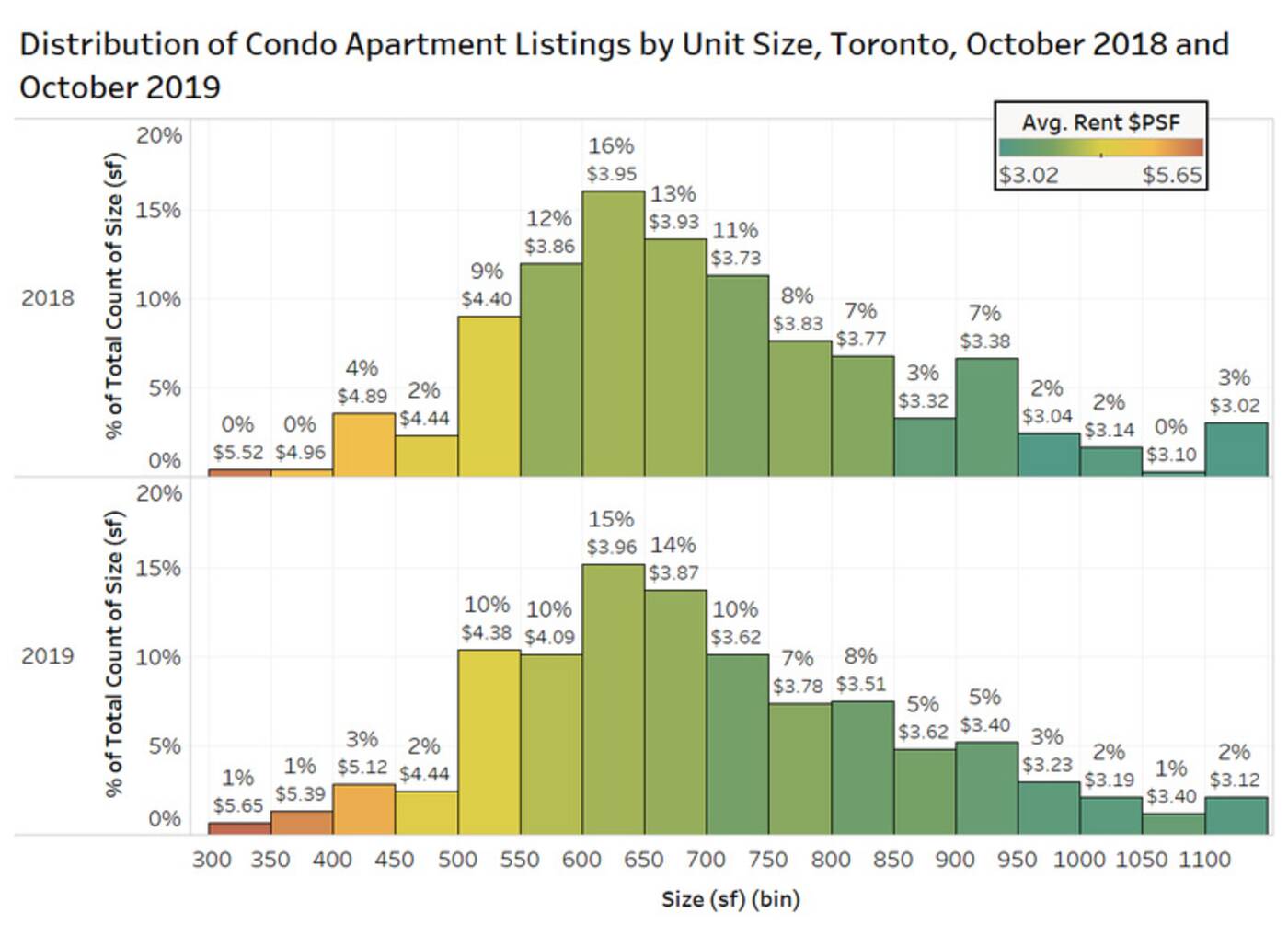 The rent price per-square-foot of an average Toronto condo has remained virtually untouched over the past year. Image via rentals.ca.

"Last year, pageviews for rental apartments were three times higher than condo listings," notes Rentals.ca of its listings site. "That rate has accelerated to five times higher in October 2019."

And yet, demand can't explain everything.

"There appears to be some confounding data showing rental rates for traditional rental apartments soaring to 16 per cent annually in Toronto, while condo rents are up just 2 per cent annually," reads October 2019's national rent report.

"It has been suggested that the market has hit a rent wall, with tenants balking at rental rates above $2,500 per month."

Indeed, Toronto may finally be saying enough is enough after watching rents go up by 30 per cent over just three years.

"Anecdotally, real estate agents have mentioned that couples are now renting studios under 400 square feet in Toronto," reads the Rentals.ca and Bullpen report.

"And two sets of couples are renting two bedroom units to save on rental rates, but it isn't clear how pervasive those trends are."