These Toronto neighbourhoods have the highest eviction rates

There's been much talk of residential evictions in Toronto since the COVID-19 pandemic hit, putting many renters in precarious financial positions due to job loss.

Affordable housing advocates applauded the provincial government in March for barring landlords from kicking out people who couldn't pay rent, but now that these restrictions have lifted, they're once again sounding the alarm about an impending spike in homelessness.

More than 6,000 eviction applications have been filed by landlords in the city alone over the past five months, according to the Toronto Drop-in Network.

Concerns about masses of people losing their homes over COVID have only heightened late July when the Ford government passed Bill 184: a controversial new piece of legislation that province says strengthens tenants' rights but that critics say it makes it easier for landlords to kick out renters.

Organizations including the City of Toronto itself continue to take action against threats posed to renters by Bill 184 and against greedy landlords in general, but this isn't a new problem.

No, these aren’t COVID cases – these are #eviction applications filed in Toronto. Over 20k in 2018 alone. Our new report shows which areas had the most filings prior to COVID. With the eviction moratorium up, we need action to avoid #COVIDevictions
Report https://t.co/ABoKXnwbTt pic.twitter.com/u992utPE0N

Evictions may be top of mind now amid an unprecedented global pandemic, but Toronto residents have long been impacted by insecure housing — some of them more than others.

A newly-released study from the Wellesley Institute, a non-profit research and policy organization that works to improve health equity in the GTA, reveals that 190,000 formal eviction applications were filed within the City of Toronto between 2010 and 2018.

A full 75 per cent of those applications were linked to late rent or non-payment of rent.

"Evictions have detrimental and cascading impacts on tenants' health and well-being," reads the study's introduction. "Evictions are destabilizing not only for individuals, but also for communities and neighbourhoods."

One of the study's key findings was that eviction filing rates are four times higher in some Toronto neighbourhoods than the city-wide average of one formal eviction application for every 20 renter households.

"In some neighbourhoods there was 1 eviction filing for every 5 renter households," writes author Scott Leon. "These high eviction neighbourhoods tend to be in Toronto's inner suburban communities, though hotspots can be found across Toronto's former municipalities."

New Report @wellesleyWI https://t.co/scuNhxTqyI - 190,000 eviction apps were filed in Toronto betw 2010-2018. Over 75% eviction applications were linked to late or non-payment of rent. takeaction with ACORN to help fight the serge of COVID evictions https://t.co/dn5JSjyvwV

More disturbing still are how eviction rates correspond with race.

To find out who may be most at risk of eviction moving forward, the study's authors contrasted formal eviction application filing rates with census tract sociodemographic data of renter households from the 2016 Census (the most recent census data available.)

Researchers found that Toronto's Black population was most at risk of eviction during the time period surveyed.

The Wellesley Institute also found a strong correlation between poverty and rates of eviction in specific neighbourhoods. 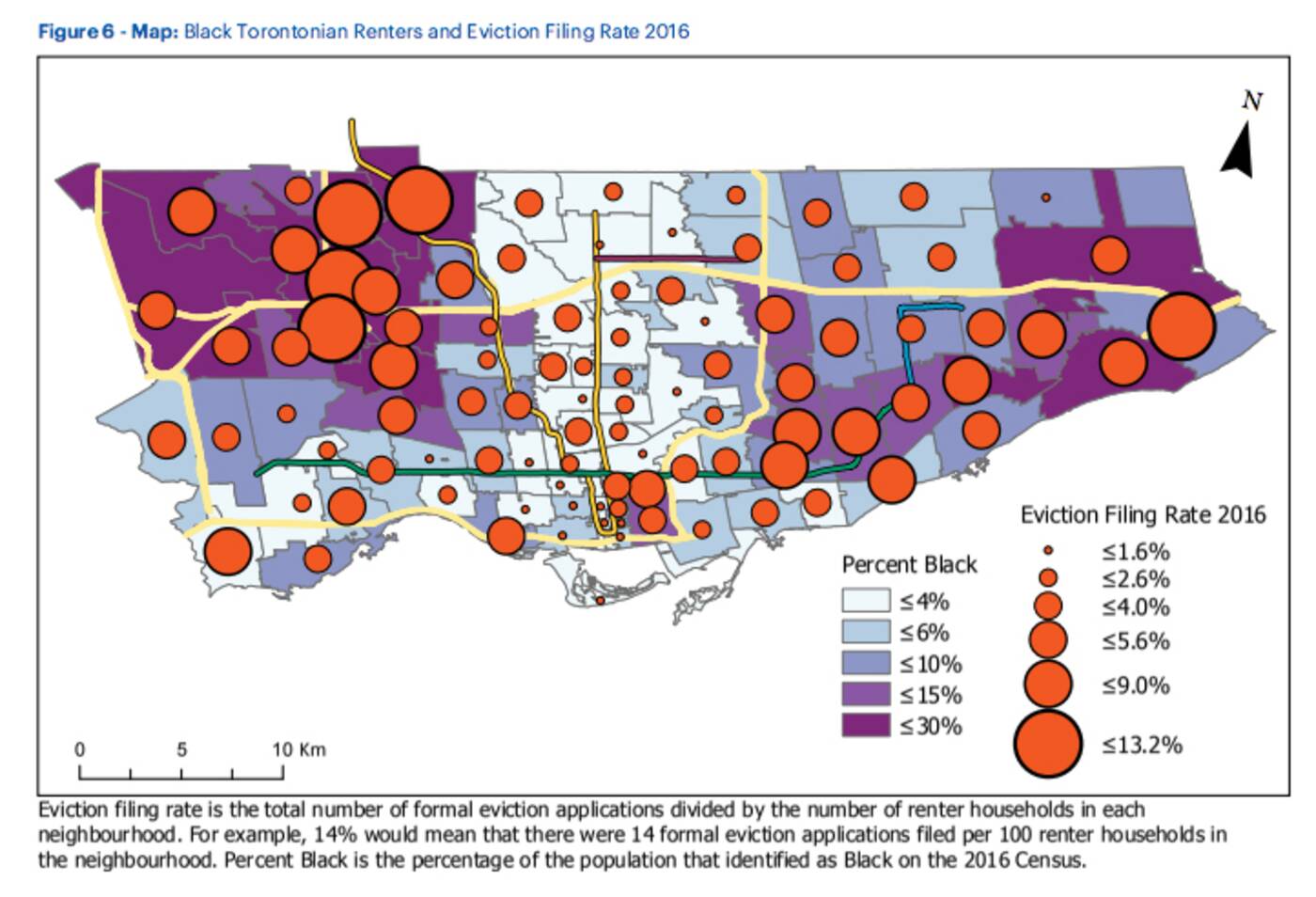 "These neighbourhoods tend to be home to higher numbers of tenant households, and in particular, more low-income renter households," reads the study. 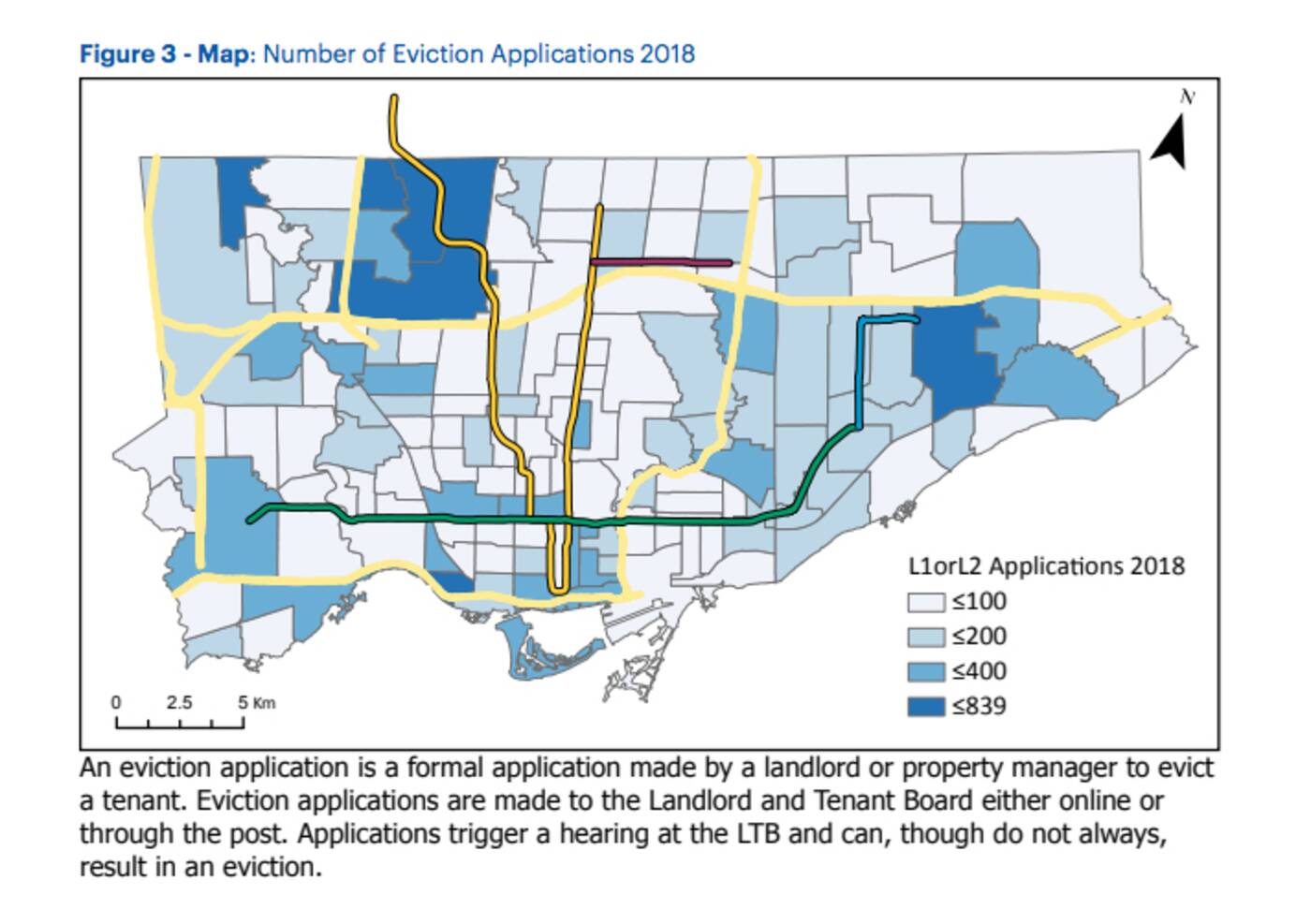 So what does this mean for Toronto amid a fast-mounting affordable housing crisis? When thousands of people owe months' worth of rent payments to their unforgiving landlords and eviction applications are spiking?

Leon, like so many experts in the field, say the best way out of this mess is through strong government policy.

"Novel responses may be required to avoid mass evictions related to the COVID-19 pandemic and recession," reads the study, referring to "promising policy directions" such as the strengthening of legal aid, the expansion of education and prevention programs, and "improving upstream conditions" by reducing rents and adding more supply.

"This report finds that eviction applications were common in Toronto prior to COVID-19, and that some neighbourhoods and communities faced disproportionate rates of eviction filing," Leon concludes.

"The pandemic and recession have increased the risk of mass arrears and evictions. If left unaddressed by policy and program change, we could expect significant health and economic fallout."