Tensions continue to rise between Ontario landlords and the tenants who haven't been paying them rent since COVID-19 first hit and the province declared a state of emergency.

Now that a nearly five-month-long ban on residential evictions has been lifted, things are starting to get even nastier than they already had been.

One Peterborough landlord has taken to publicly shaming her tenant in an attempt to secure some $16,250 in back rent.

"My tenant... owes me 13 months' rent which is $16,250," wrote Liz Woosey in a Facebook post that's gone viral since it was published on Tuesday night.

"Today I put up a sign on my building stating this and asking for Premier Doug Ford's help. Within minutes [the tenant] vandalized it... I am really tired of the lack of support for landlords in Ontario."

Three photos included in the post show what appears to be a vacant commercial unit with apartments above it. In the spot where signage for the business would normally go, a large, black and white banner reads: 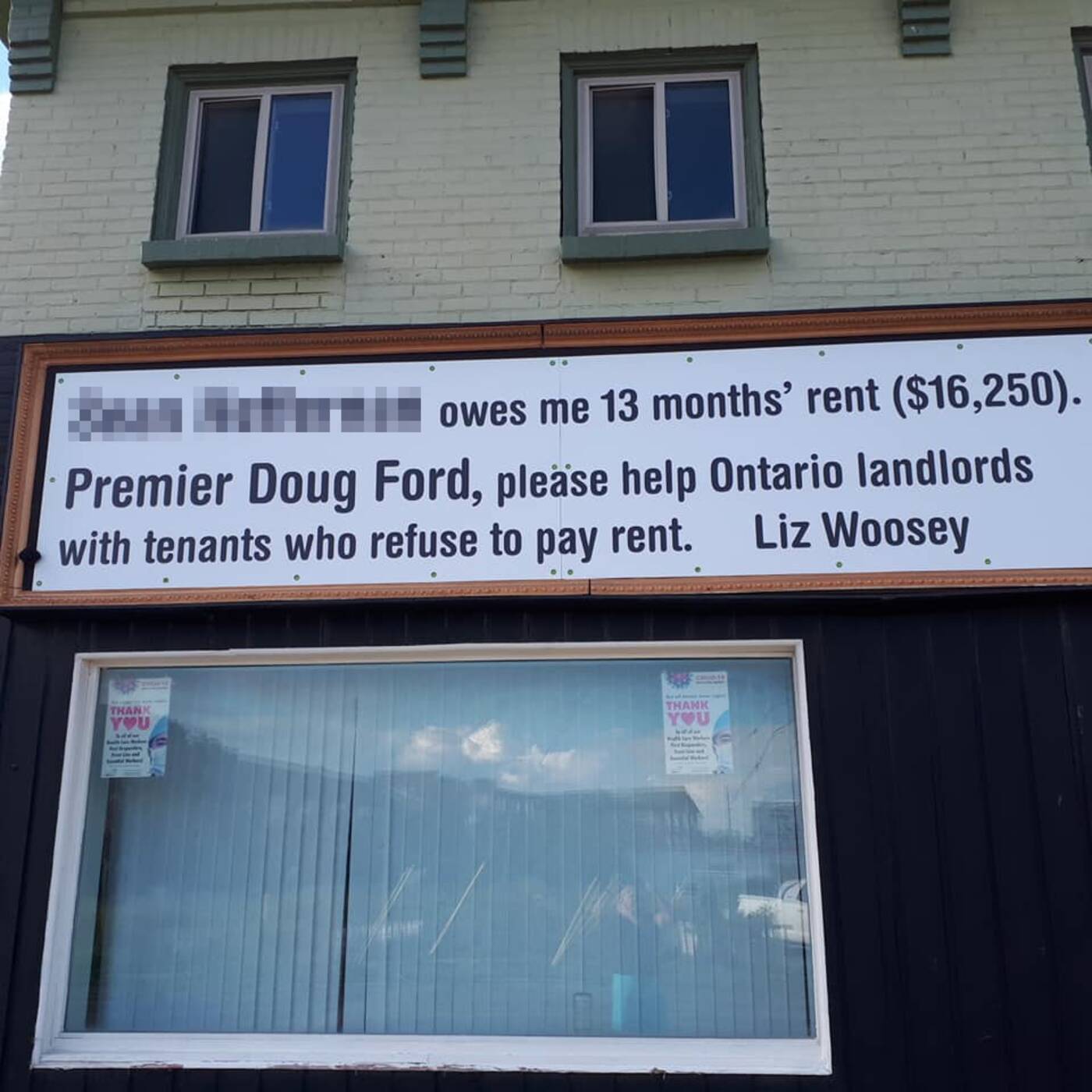 While only Woosey and her tenant know the specifics of their situation —  and 13 months is a lot further back than the eviction ban goes — many are criticizing the landlord for sharing her tenant's name publicly.

Others, of course, are slamming the tenant as a "scammer" and a "leech" for living rent-free for so long.

More than 6,200 comments have been left under Woosey's post as of Wednesday afternoon by people with different but equally passionate opinions.

"Sounds like your investment didn't pan out," reads one of the more measured comments aimed at Woosey. "Sounds like a risk you took when you became a landlord!"

"Why in the world would you publicly humiliate someone like that and expect to be on the right side of things?" reads another. "Take it to court like a normal landlord, this is disturbing."

Woosey's request for help from Premier Ford might also come as rich to some, given the PC government's recent passing  of Bill 184 — a piece of legislation that critics say actually makes it easier for landlords to evict tenants. 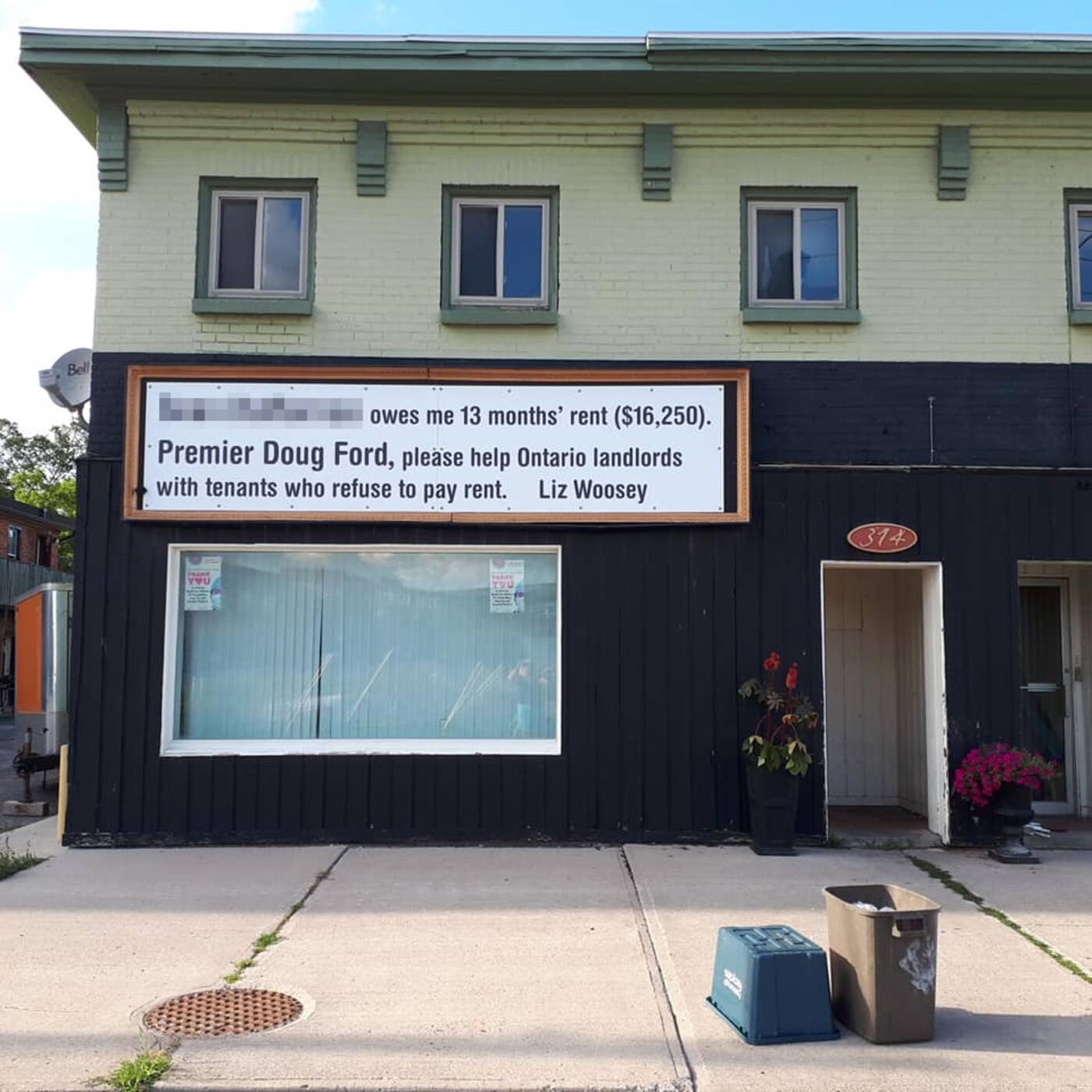 Regardless of how you feel about Woosey's actions — which are alleged to include paying for a sign to shame someone who can't afford their home, while asking the government for financial help, after buying a boat in the middle of a pandemic — it's not up to anyone on Facebook to decide what happens.

Decisions pertaining to evictions and ordering back pay are made by Ontario's Landlord and Tenant Board (LTB), which, while always busy, has been deluged with a flood of applications from landlords looking to boot tenants who couldn't pay rent during the pandemic.

More than 6,000 eviction applications have been filed during the pandemic in Toronto alone, according to legal experts who say that many more are likely to come as "tens of thousands more tenants are behind on rent."

The reason residential (and eventually commercial) evictions were banned in the first place was to help people who were suddenly out of work due to mandatory COVID-19 business closures.

Most of the province is now in Stage 3 of reopening, meaning that 99 per cent of non-essential services can resume operations, but back rent will be tough to make for people in lower-earning jobs.

Advocates have thus been calling for an extension to the eviction ban, or for some sort of rent relief from Toronto Mayor John Tory to prevent what some say will be a surge in homelessness across the city.

It'll be interesting to see who is better protected under Bill 184 when Woosey takes her tenant to the LTB... which she probably should have just done in the first place without putting up any signs.