Construction is humming along on the fancy new condo complex at Lakeshore and Bathurst in downtown Toronto, home to the historic Loblaw Groceterias building.

As two long-awaited residential towers and a seven-storey commercial building in what used to be a massive warehouse come closer and closer to completion, we're starting to see more of what developers have planned for the outdoor spaces surrounding them.

Their plans are pretty darn cool. 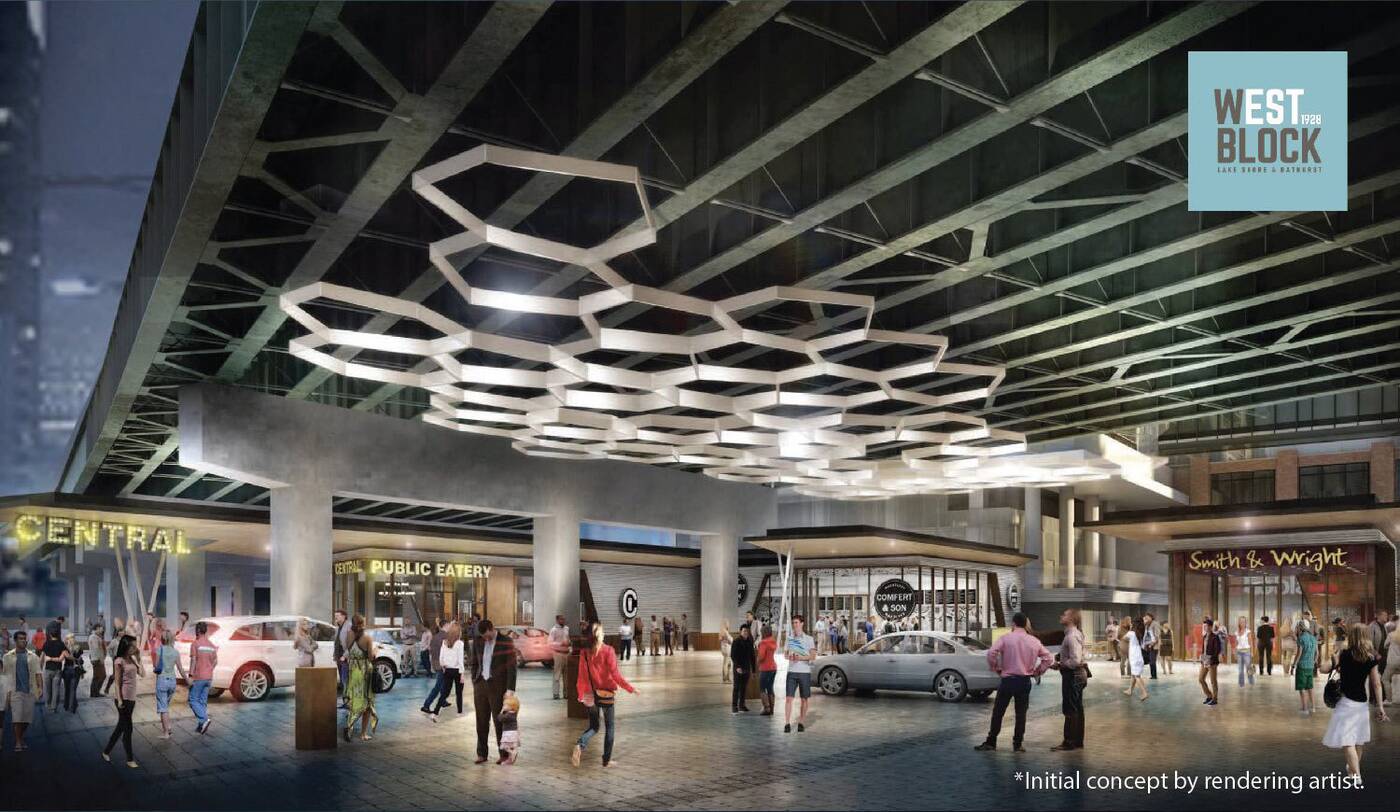 The old Loblaw warehouse in downtown Toronto is currently being converted into a 245,000-square-foot commercial complex. Image via Apex Concord.

For context, the development spans an entire 3.5-acre city block and will be named "West Block Est. 1928" (Or simply "The West Block").

Concord Adex is building two condo towers of 37 and 41 storeys (called "The LakeShore" and "The LakeFront") above the main complex, bringing a total of 876 new dwelling units to the downtown core.

The restored base building is what should prove most exciting for Toronto residents and visitors, however, when it completely revitalizes not only the old Loblaws warehouse but every public space surrounding it. 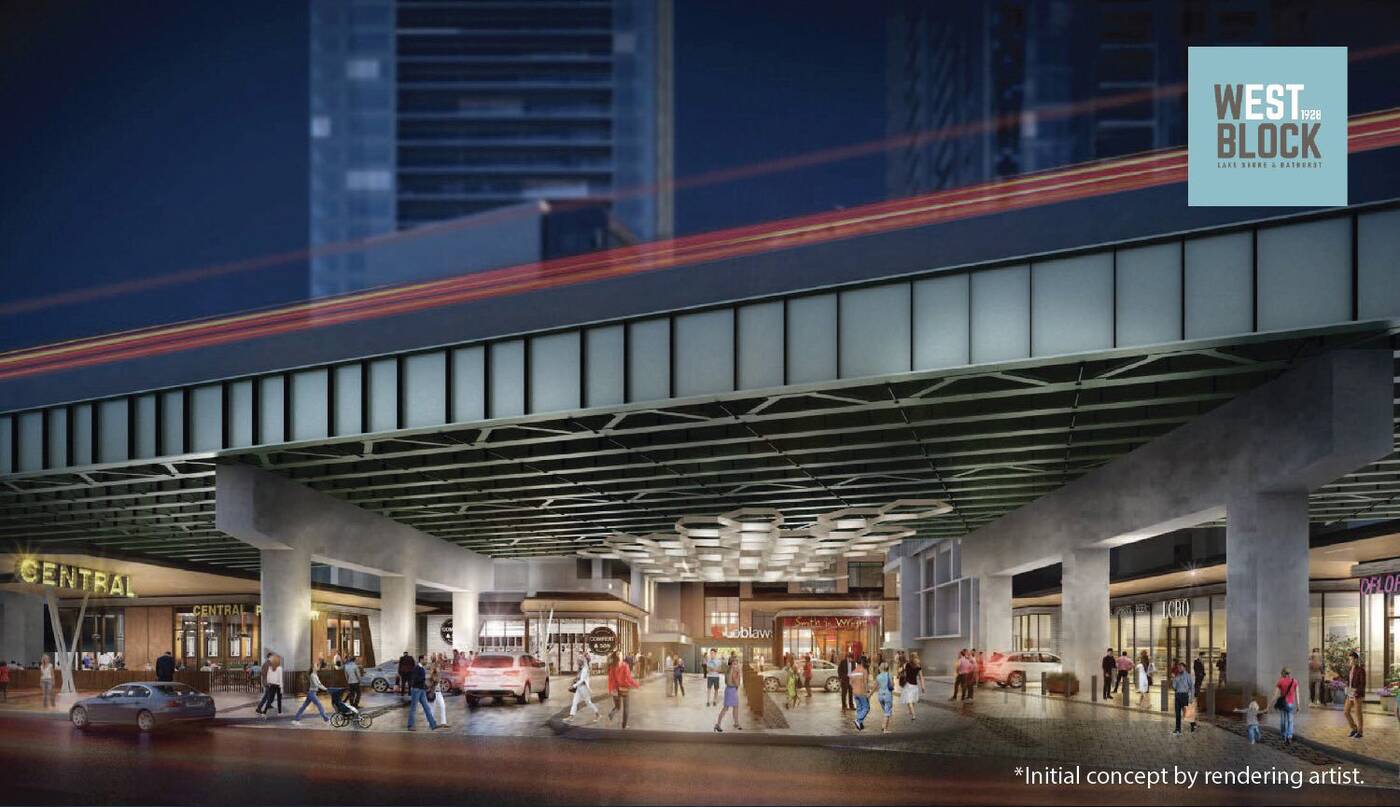 Restaurants and retail stores are slated for the area beneath a new commercial complex at Bathurst and Lakeshore in Toronto. Image via Concord Apex.

"Below The LakeFront and The LakeShore developments will be the West Block, a development that will bring life and character to the space under the Gardiner," reads the caption of a post from Concord with two artistic renderings of the space.

Another post with even more renderings states that the area "will feature a wide variety of retail shops" and that The West Block "will soon be downtown Toronto’s new gathering spot."

Renderings suggest that developers plan to revitalize a portion of space under The Gardiner, much like what has been done with the Bentway further west. 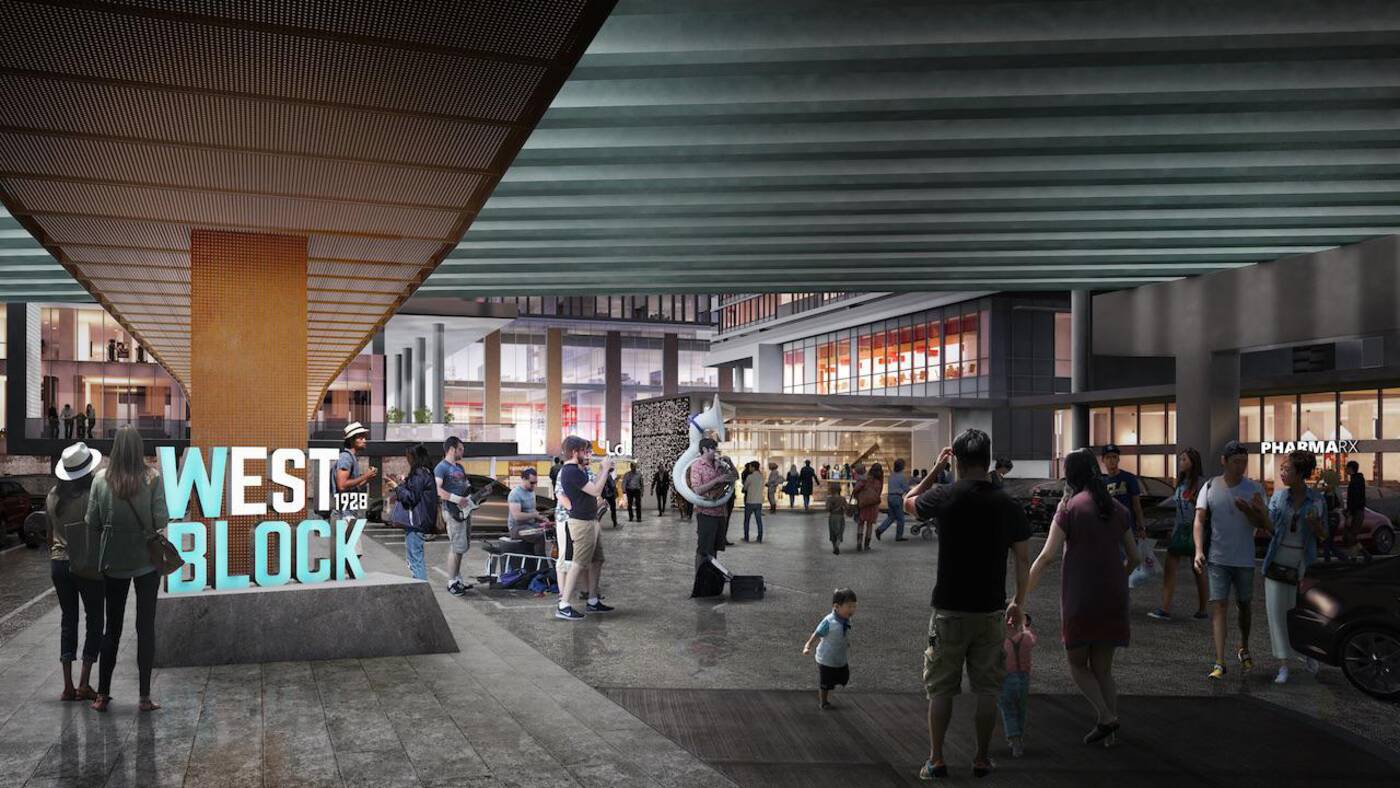 Landscape architects Claude Cormier + Associés have been tapped to design the public space beneath the Gardiner at Lakeshore and Bathurst. Image via Concord Adex.

Unlike the Bentway near Fort York, which is predominantly a public gathering and recreation space, the space under the highway at Bathurst and Lakeshore is also expected to have retail and commercial uses.

Judging by the renderings, developers are looking to add such tenants as coffee shops, restaurants, a drug store, the LCBO and, of course, an already-planned 50,000-square-food Loblaws store at ground level.

Not as cool as an outdoor, under-the-Gardiner skating trail, perhaps, but definitely cooler than a bunch of rich people eating in stupid domes.