If you, like most young working-class Torontonians, are already struggling to keep up with the demands of simply existing in Canada's most expensive city, prepare to be gobsmacked.

The average annual rent for an apartment or condo in downtown Toronto is expected to increase by as much as 11 per cent over the next year, according to a panel of 16 housing experts surveyed by rentals.ca.

Professional economists, data analysts, university professors, politicians, property managers and affordable housing advocates from across the country all agree that "finding the right apartment, house or townhouse to call home will continue to challenge renters in 2019," especially in Toronto, and especially for those who don't already live in a rent controlled place. 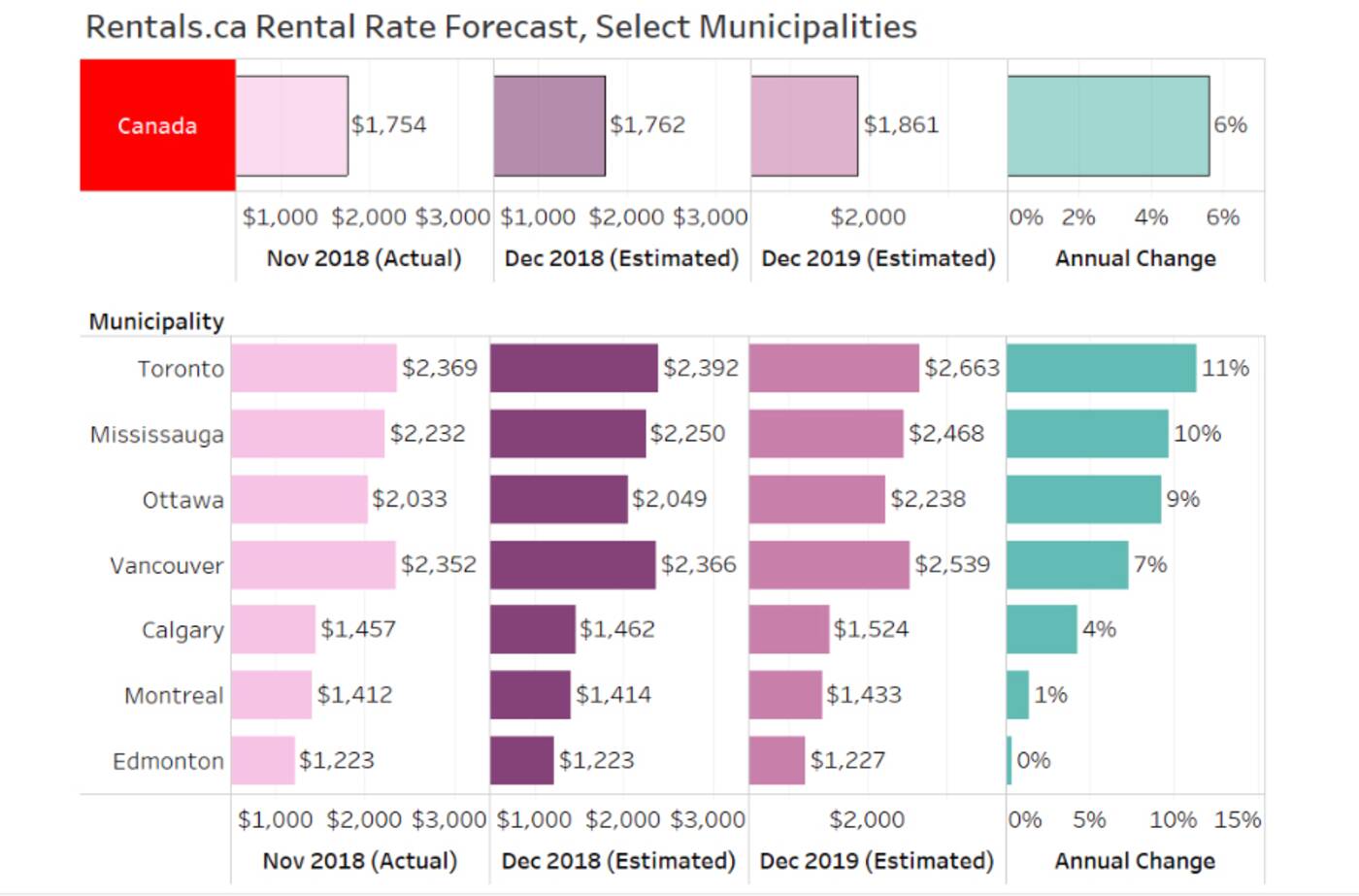 If you're looking for a more affordable place to live this year, try Montreal or Edmonton. Image via rentals.ca.

Nationally, rents are predicted to rise about 6 per cent by the end of 2019, with Vancouver and Ottawa showing increases of 7 and 9 per cent respectively.

Toronto's number is expected to be higher, however, thanks to an insufficient number of rental units and the reluctance of anyone to move those from units that do already exist (for fear of their rent jumping up hundreds, if not thousands of dollars per month).

Variables such as immigration, job growth and stricter mortgage qualification rules are similarly driving up demand and, thus, prices.

"With increasing rents and declining credit availability for mortgages, residents are likely to stay put," said Ben Myers, president of the real estate advisory firm Bullpen Research & Consulting, in the rentals.ca report. "With expanded rent control implemented in 2017, tenants are incentivized to stay in their current home."

Toronto has the lowest rental turnover rate in Canada, if not the lowest in North America, says Myers, at just 11 per cent.

"Many young couples and families have decided to postpone purchasing a home, which has driven two-bedroom rental rates to nearly $2,600 a month in Toronto," says Myers, noting that it's now "more expensive to own" than rent for residents of the city.

Acclaimed urban studies theorist and U of T professor Dr. Richard Florida also cites supply as one of the driving factors behind Toronto's skyrocketing rent prices.

"When new students or researchers come to the University of Toronto, they tell me the same thing: They have to endure an auction where people actively bid on apartments," he said. "I've never seen anything like it anywhere else in North America."

The City of Toronto is currently working on a 10-year plan to address the shortage of rental units as demand continues to increase.

Mayor John Tory wants to add some 40,000 units to the market over the next 12 years, according to Affordable Housing Development manager Valesa Faria, with 3,300 or more coming available per year starting in 2020.

For now, though, we can expect to see an increase in what experts call "renovictions"—where landlords upgrade their properties to target luxury tenants and hike the rent rates far beyond what those who currently live in the units can afford.

"As fewer units are turned over, there is less supply, and rental rates increase further," says Meyers.

"The dynamic is shifting away from 'bubbly' house prices to 'bubbly' rental rates."