Aster and Christie recall the first moment they announced Dollhouse's first party. In June 2021, at Queer Skate Jam located in Wallace Emerson, they noticed the DJ was playing music off of Spotify instead of spinning.

Due to a malfunction with their board, they weren't able to spin their set. The duo would offer their own board and was met with a no, for it seemed the DJ would rather have played off their phone rather than share the set with them.

Either it was the shock of getting 'no' or the adrenaline from the atmosphere of the event, but something clicked. Aster got on the mic near the DJ set and made an announcement.

The beginning of the Dollhouse Collective

While they may not have known it at the moment, that event would catalyze the beginning of Dollhouse's illustrious rave path.

Founded on that very day, Dollhouse is a collective formed by Aster, DJ dustBunny, and Christie, DJ Cherry Chip. The collective was named after the infamous dollhouse in Leslieville. 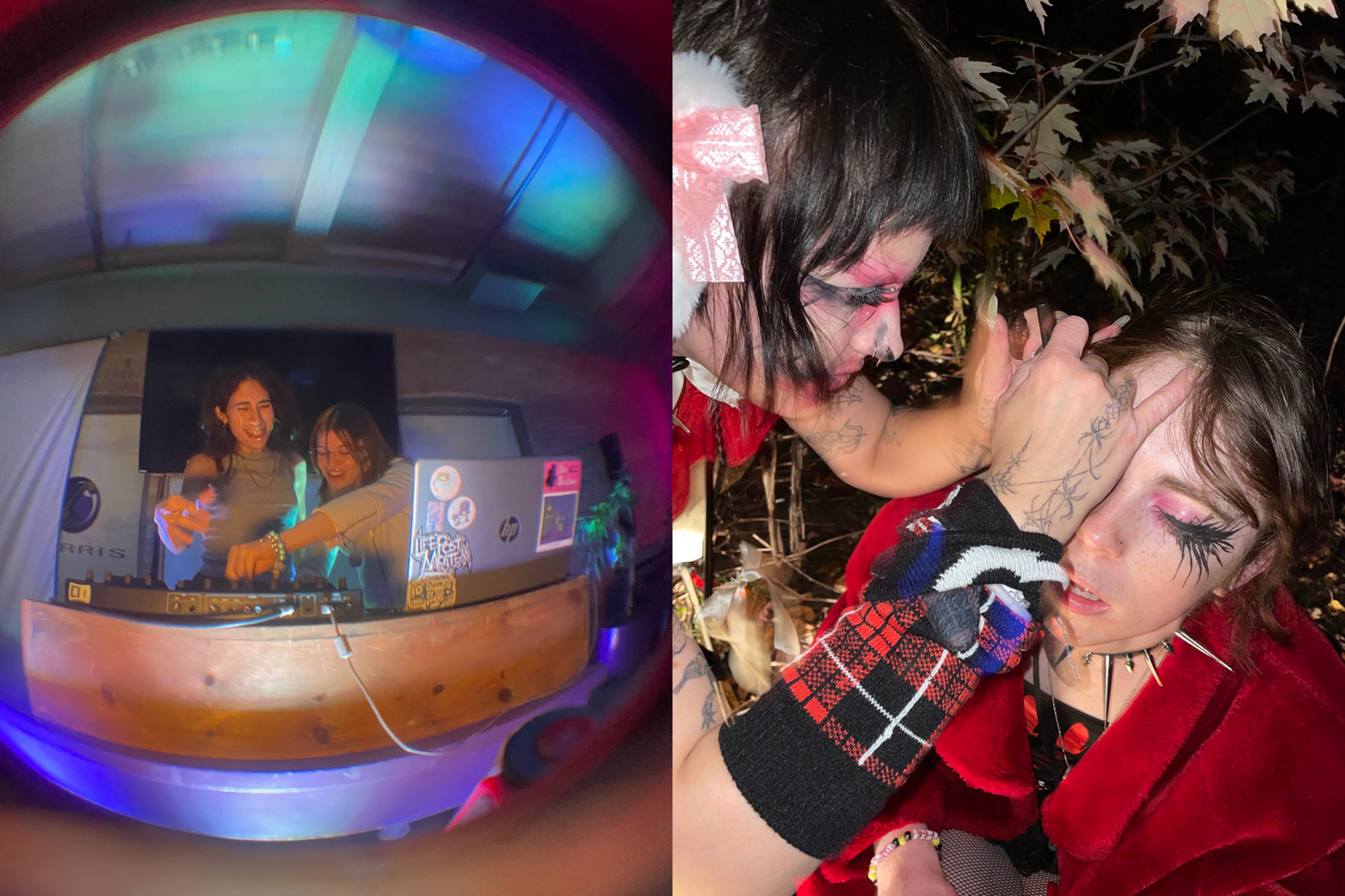 dustBunny b2b with Heavenscapes at INRCHILD in December 2022 (left) and Christie getting her makeup done by Ren. Photos courtesy of Dollhouse.

"We both knew that we wanted to do something important and something we could do for other people," said Christie.

The duo first met on Tinder, where Christie had written in her bio that she wanted to start a band. They began chatting, and initially put off meeting up due to the lockdown.

But after waking up to the news of UK-based DJ Sophie's death, they found themselves at Christie Station meeting for the first time.

"We walked to a little bench and we just chatted and looked at the clouds and talked about Sophie," said Aster.

Losing Sophie made them talk about what she meant to them, but also how they would carry on her torch within trans acceptance and love within the self and community. “I’ve always considered that the start of how Dollhouse became,” said Christie.

Since its creation, Dollhouse has held over five events across the city, from CineCycle to BSMT 254. Dollhouse's goal is to provide an alternative to nightlife that is missing in the city and create a queer dominated space.

While it began as a trans collective dedicated to trans DJs, it has gone beyond that.

From juke to techno pop, Dollhouse is a genre-bending event showcasing Toronto's up-and-coming talent, with the aim of creating an inclusive space that the city is lacking.

If you're lucky enough to catch a Dollhouse night here's how it would go; A whole new introduction into music you’ve probably never heard before or music that brings back a nostalgic feeling. Including dancing, a lot of dancing. 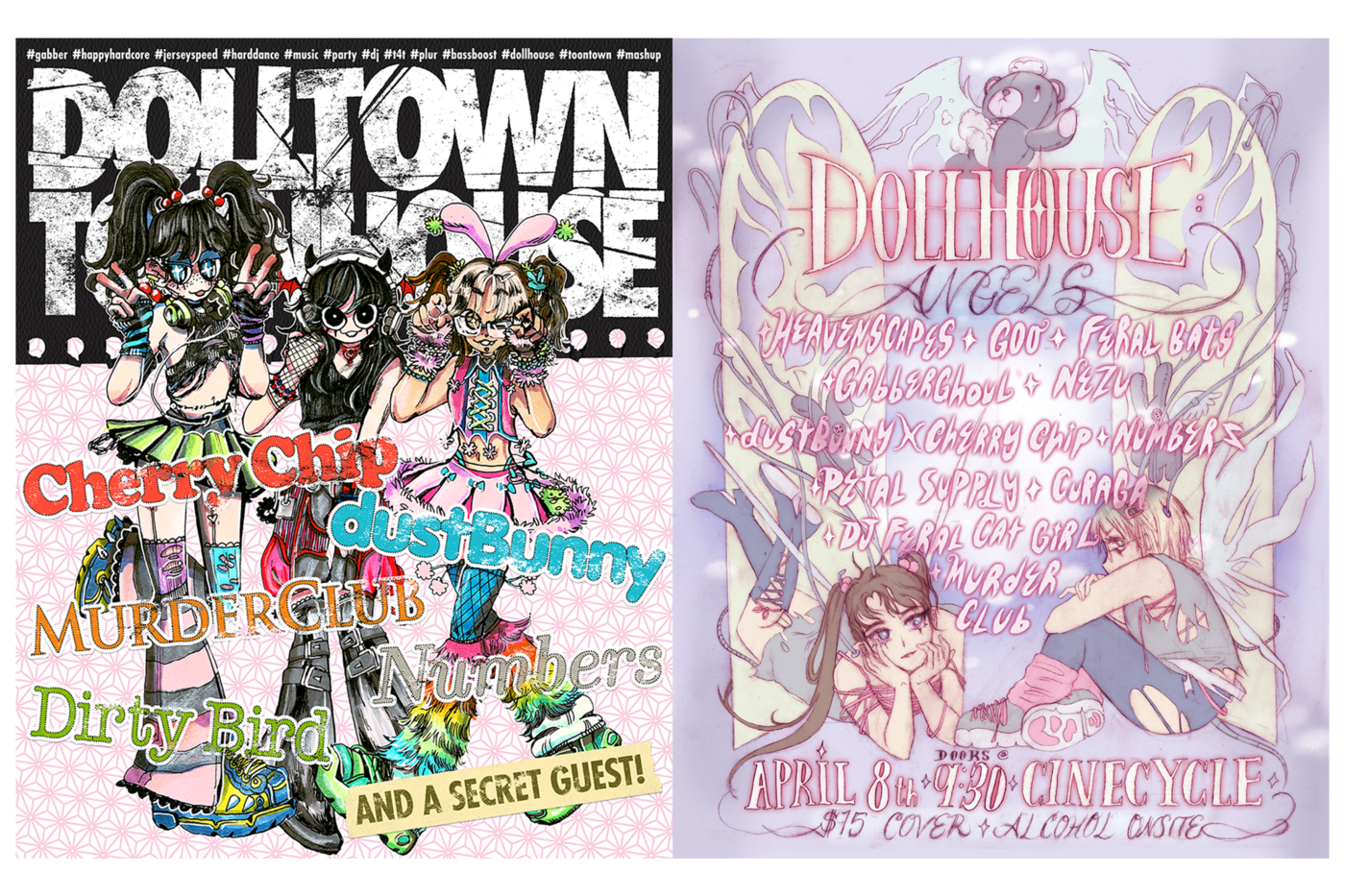 Dollhouse glimmers in DIY, reinventing spaces with their presence. However, Dollhouse isn't just Christie and Aster.

Dollhouse also has a hold down in Montreal, with DJs Ashe Vestal (KFC Murderchicks) Allegra (Gabberghoul) and Sable, who all met at Dollhouse and started their own event Portal.

I got a chance to speak to most of the members about their time at Dollhouse, and got a glimpse inside the mind of the collective.

It all began at a rave

For most members, the impromptu rave at Wallace Emerson was the first time they all met. “I remember me and my friend were walking up, and I showed up in Juggalo face paint…the first thing we heard was CaramellDansen [played] at 200 BPM,” said Oliver.

Edward recalls Faith playing happy hardcore music they'd never heard before, "to hear that kind of music I never thought I’d be able to connect with people in real life on the same kind of level was something else."

"We all came down to this underpass to see [Christie] play and it was really cool seeing someone DJ live with all these people skateboarding around her,” said Annie. “A year later at pride, me, Evie and Angel got to play the queer skate jam…it was like a little arc."

Aster and Christie stated that they inspirations for Dollhouse can be attributed to raves and collectives such as 909 Worldwide, TownToon, better2gether and Fast Muzik from Glasgow to name a few.

But creating these events has been difficult when accessing spaces that cater to DIY collectives.

Finding venues is a major problem in Toronto

Toronto consistently has had an issue with venue spaces, specifically within rave culture. With the expansion and growth of condo developments, the city has become a hell-scape for DIY organizers.

Joseph mentioned that within the city there are a lot of power structures that simply exist because of how impossible it is to get venues and how much money you need.

"It's a bitch out there, it’s easier to throw a party in Montreal than Toronto," said Joseph. "Our nightlife scene is genuinely lacking in spaces…you need to have a [well known] name to get into it." 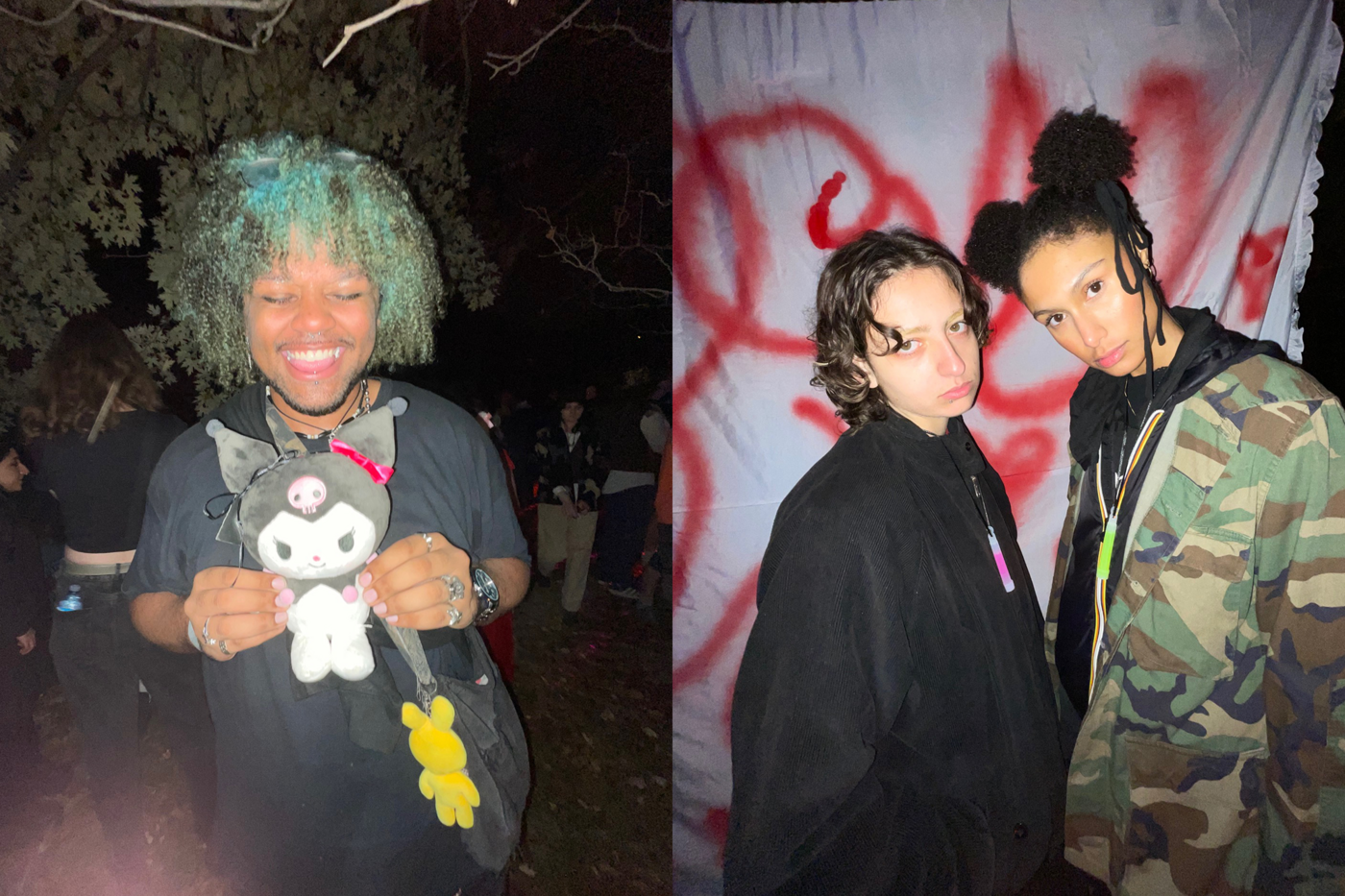 Cleo, who called in from Brooklyn, said there was a huge disparity between Brooklyn's scene and Toronto's. If artists and DJs wanted to book shows or parties, it's more affordable and accessible to do so with the plethora of venue spaces in Brooklyn.

While summer offers spaces that are outdoors, winter doesn't allow for that to be a viable option. Even the outdoor spaces pose risk of safety and being raided by the police. Not every attendee can afford to commute to locations that aren't central to the city.

DJs can be part of the problem

Another issue the collective mentioned is the barrier between those performing and those attending. "Like artists and DJs who walk around like Gods in the room, and you can't even look at them," said Edward. "At Dollhouse it's never like that."

Edward remembers Christie dancing in the crowd during her set at the first Dollhouse event they attended. For Dollhouse, there isn't a wall of power, it's a community event where everyone in the room is equal.

"I don’t feel the hierarchy of 'oh my god I need to walk on eggshells when this person holds so much power in the room,'" said Edward. "It kind of helped me feel like I could be more outgoing at these events."

Hierarchy is a huge issue in nightlife, dominating who can play where and who can't touch the decks at all. Dollhouse aims to deconstruct that issue and banish it from their events.

"It's rewarding to see…and our audience is queer, it even shows in the energy," said Evie. "We're dancing, we're having a good time and we're bringing the energy."

The Dollhouse Collective is about community

The intention of Dollhouse isn't to gain a massive following and dominate the Toronto nightlife. Its purpose is simple, it's for friends to come together and explore different types sounds, dance and be an escape from the cities hetronormative spaces. It's about being experimental. 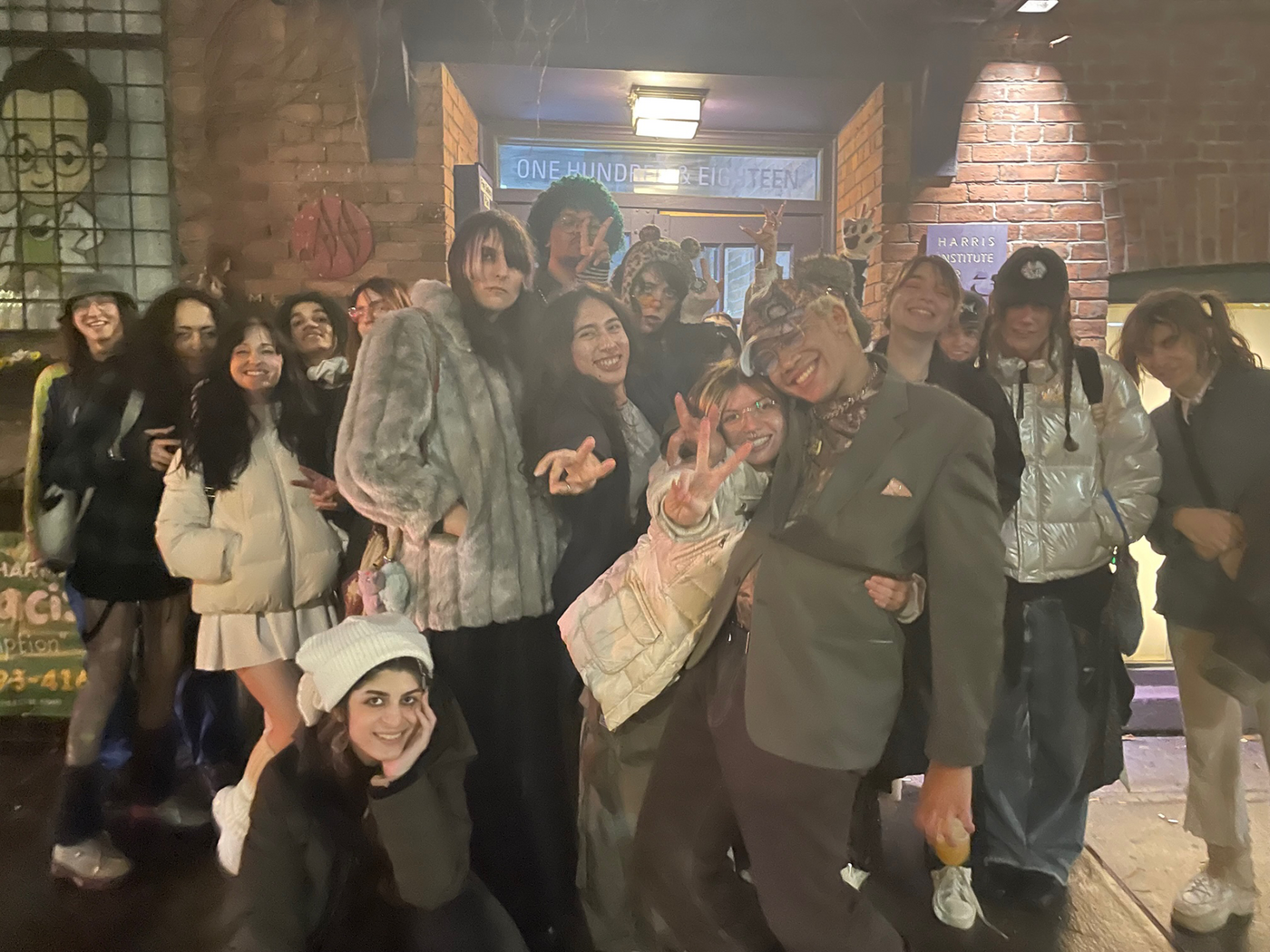 Dollhouse consists of over a dozen members and continues to grow. Photo courtesy of Dollhouse.

"A huge misinterpretation of what we are is a lot of people look at us and think we're hyper-pop, and we don't like that word," said Joseph. "We play very diverse sounds that people don't accredit us for."

When Dollhouse isn't hosting events, you can find them in a small studio space, spinning, sharing music and growing together. An intrumental part of their growth comes from this space, and has strengthened their relationship over the past year.

At its core, Dollhouse wants to continue building a space that can always for more people to seek advice, friendship and growth as artists. Christie said that it's important to build relationships beyond networking and clique culture.

"I was the quiet kid in the corner for most of my life before I transitioned, it's not about envying people for being cliquey," said Christie. "It's about find your space and just being genuine."

The future of Dollhouse is incredibly bright, with their Feb., 4 event at The Baby G and ideas to showcase the collectives and friends works on SoundCloud. 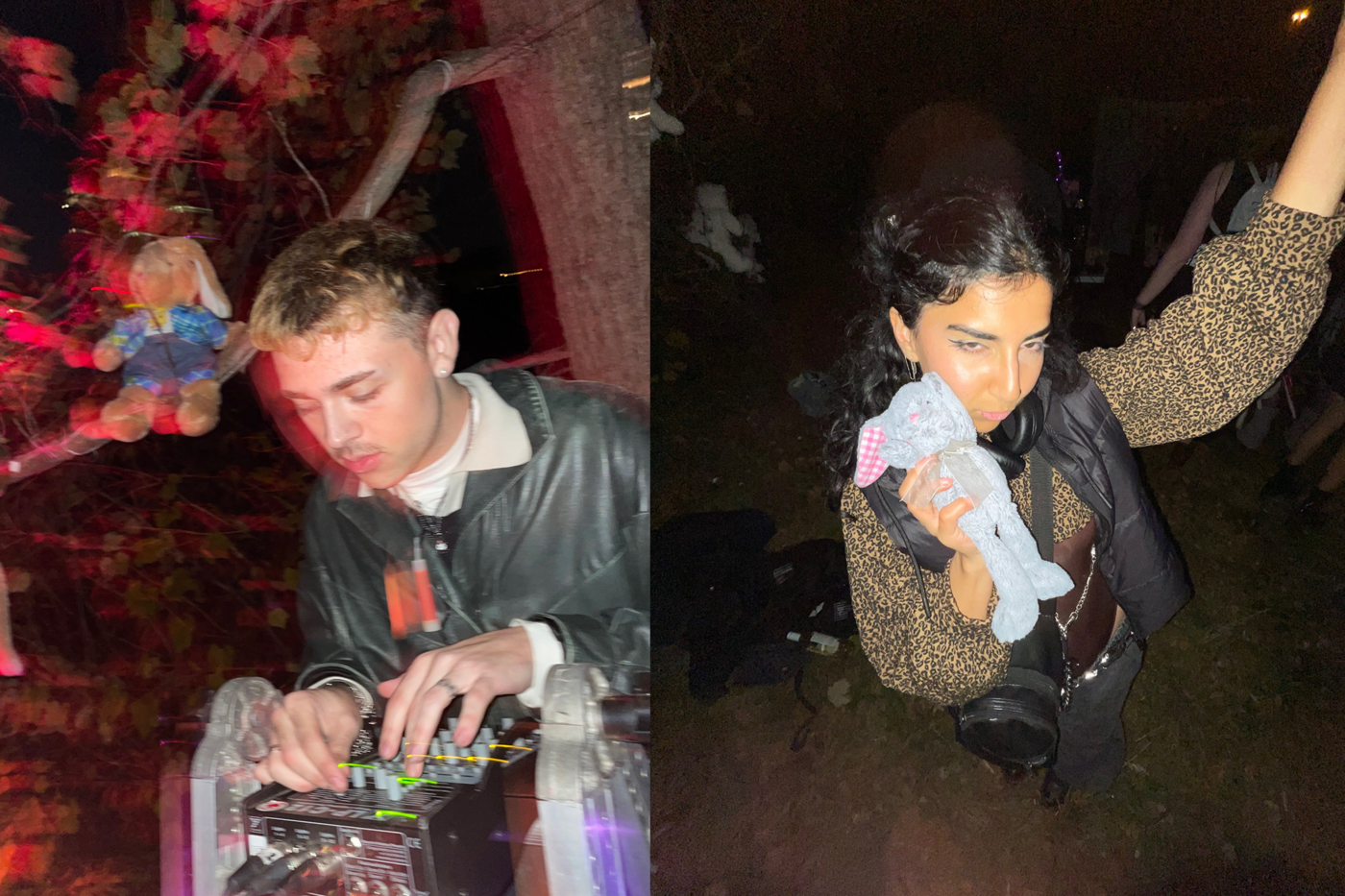 But for now, Dollhouse continues to be what it always has been, a family that grows with every event. Dollhouse will forever be a safe home for those who seek out chosen family.

"It's about eclectic diversity of tastes, about everyone's experience in our group and re-contextualizing different rhythmic patterns," said Christie. "Dollhouse [was formed] at the beginning of a new era in underground music culture, and there is this beautiful unity and chaos to that, and it will continue."