The history of the iconic A&A Records in Toronto

In the 1950s, A&A Records and Sam the Record Man, two stores on Yonge Street, were an integral part of my teenage years. They were the largest and most important retail distributors of vinyl records in Toronto.

They eventually franchised, allowing outlets to be opened across Canada under their corporate names. A&A and Sam's were multi-million-dollar businesses in the days when 33 1/3 rpm (revolutions per minute) records were the most common recording format.

In my pre-teen years in the 1940s, music was recorded on 78 rpm disks, made of a brittle material of shellac resin. First introduced in 1898, they were played on wind-up gramophones.

After electricity was introduced, record players replaced gramophones and though the sound quality improved in the decades ahead, 78s remained the standard format for recording music.

A single song was on one side of the disk, and another on the reverse side, the total playing time being about 3-4 minutes.

In 1947, smaller size records (45 rpm) became available, which were sold in paper jackets. Though not as large as the 78s, they extended the playing time due to their smaller grooves.

However, record sales exploded in 1948 when the industry introduced long-playing records (33 1/3 rpm), manufactured of vinyl plastic. These were sold in cardboard jackets. Many retail outlets opened to accommodate the demand for these long-playing records. 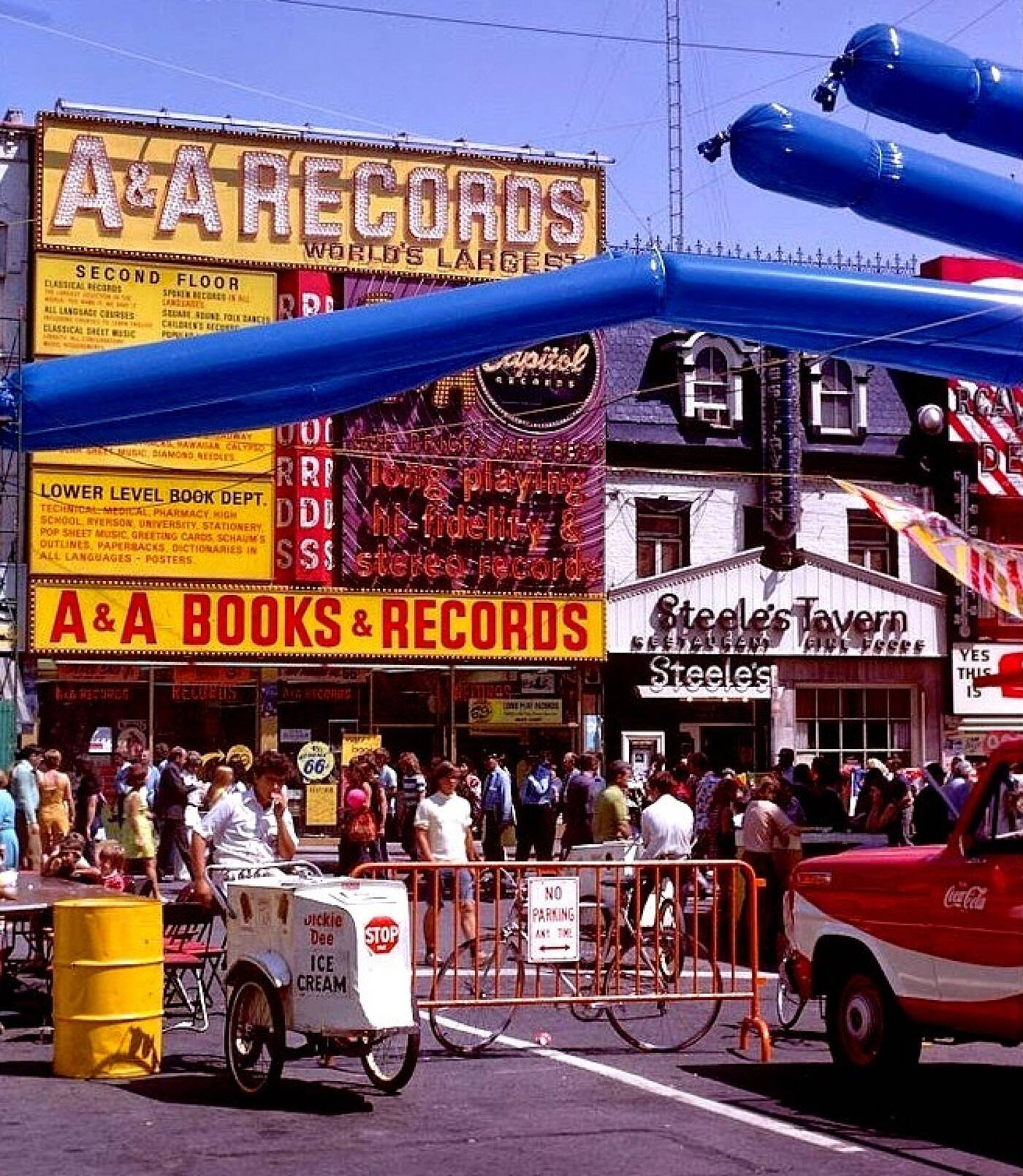 Before the internet was invented, in the dark distant decades of yesteryear, Toronto’s movie houses were the centres of entertainment. Located in almost every every community throughout the city, they were within walking distance of almost every households.

In my pre-teen years, I faithfully attended movie matiness every Saturday afternoon and was thrilled by the heroes of the silver screen.

When I entered my teen years, my parents finally allowed me to travel downtown to the great movie palaces of the city — Tivoli, Shea's Hippodrome, Imperial, Odeon Carlton, and Loew’s Downtown (now the Elgin).

When I wanted to see more than one feature film, for the same price as attending the larger theatres, I visited the Biltmore, Rio, Coronet (Savoy) or the Downtown.

Most of the downtown theatres, whether a movie palace or a run-down dive, were within walking distance of Yonge and Dundas, so when I attended a theatre on Yonge Street, I always visited Sam the Record Man and A&A Records. They were located near the corner of Yonge and Gould Streets, which was only one block north of Dundas Street.

The endless displays of records at both stores were amazing. It was said that at its height, Sam's had almost a million records in his store.

Although this might have been an exaggeration, I can verify that the selection was enormous. There were multiple aisles, on either side of them, long rows of counters, with large boxes on them. This was where the records (in their jackets) were stored.

Cardboard dividers, with labels protruding above the record jackets (covers), labelled the type of records in the section. They were grouped according to the vocalist, groups, type of music, band, classical, orchestra, country of origin, style of music etc. Recordings were available from all over the world.

As a teenager, I spent countless hours browsing through the various sections of these two shops. I was always amazed at the expertise of their staffs, as no matter what type of record you enquired about, they knew where to direct you. 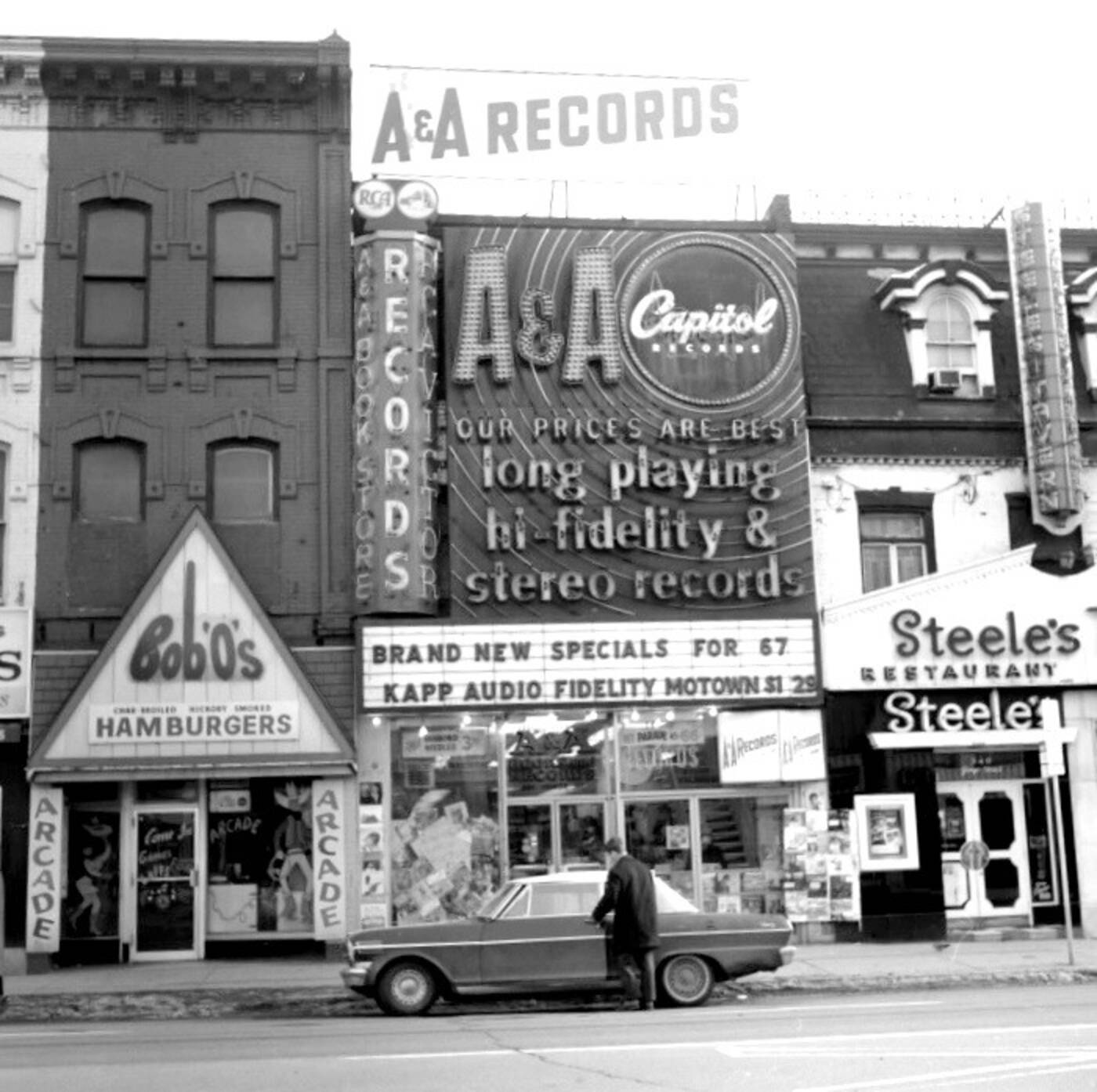 After you made your selection, you took your choice to the cashier at the front of the store. We always looked for bargains, since discounts of 10% to 20% were common on some items.

The stores stayed open until midnight, and also remained open on Sundays, in violation of the Lord’s Day Act. The Boxing Day sales were famous, with hundreds of people lining up outside the stores before they opened.

I remember that I sometimes saw a musical at either the Imperial or Loew’s Downtown, and then, purchased the sound track recording at Sam’s or A&A's.

Sometimes, I had already bought the Broadway version of the musical, before the movie of the show had been filmed. Perhaps one or two of the cardboard record-jackets below of Broadway productions will create a few fond memories. They were all available at A&A's and Sam's. 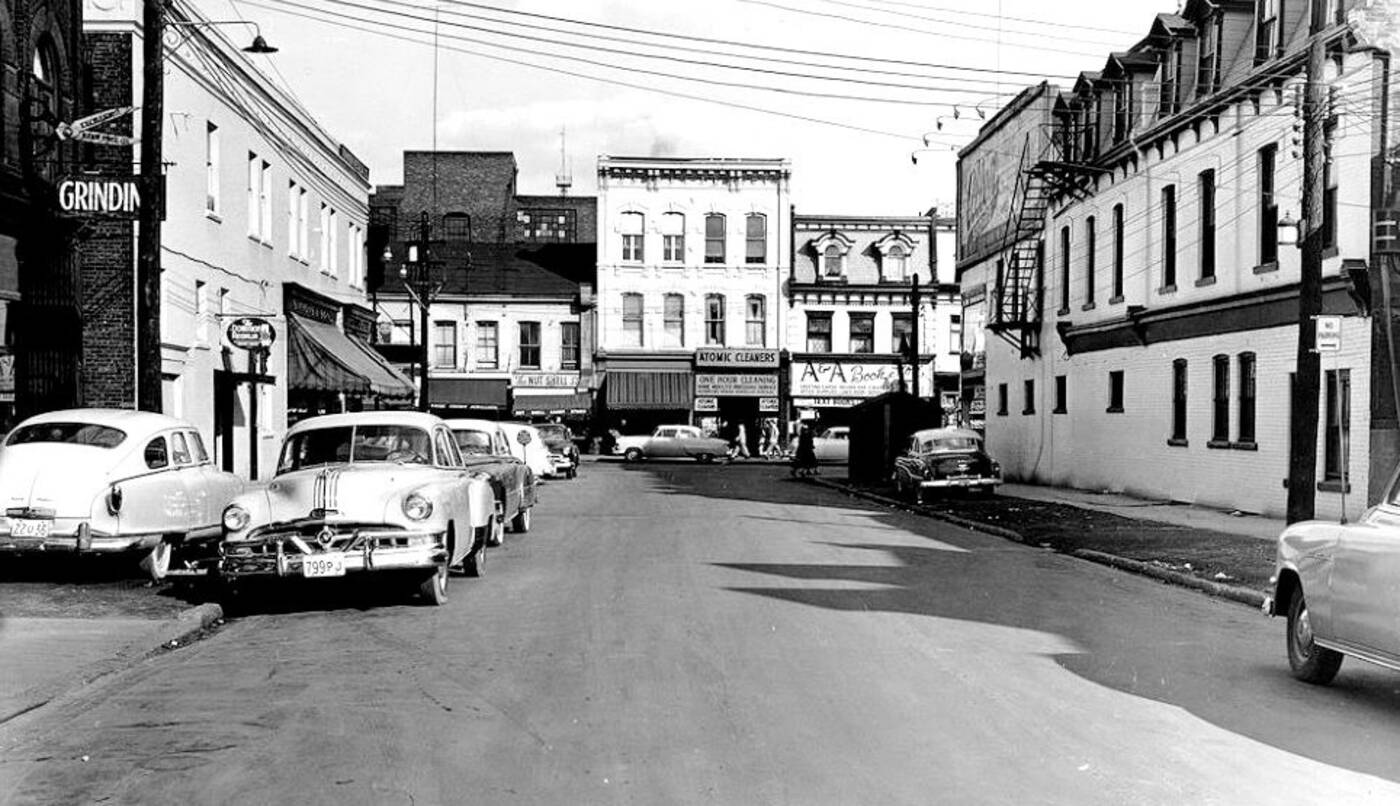 The beginning and end of A&A Records

In Toronto, Alice Kenner and her husband Mac owned a building at 351 Yonge Street. About the year 1945, with the assistance of Alice's brother, Aaron, the store opened a book shop. They named it A&A Book Store, using the initial consonant of their first names. It was located on the east side of the street, opposite Elm Street.

During the early-1950s, because of the increasing popularity of the new LP records, they added a record section. By the 1960s, record sales became the major portion of their business.

Their main competitor in the city was Sam Sniderman’s store on College Street. To compete with Sam, A&A Records offered special discounts on some recordings, door opening specials, and reduced prices on their Boxing Day sales.

A&A carried many types of music, including popular, imported, and classical. The company eventually sold franchises that were located in cities across Canada. 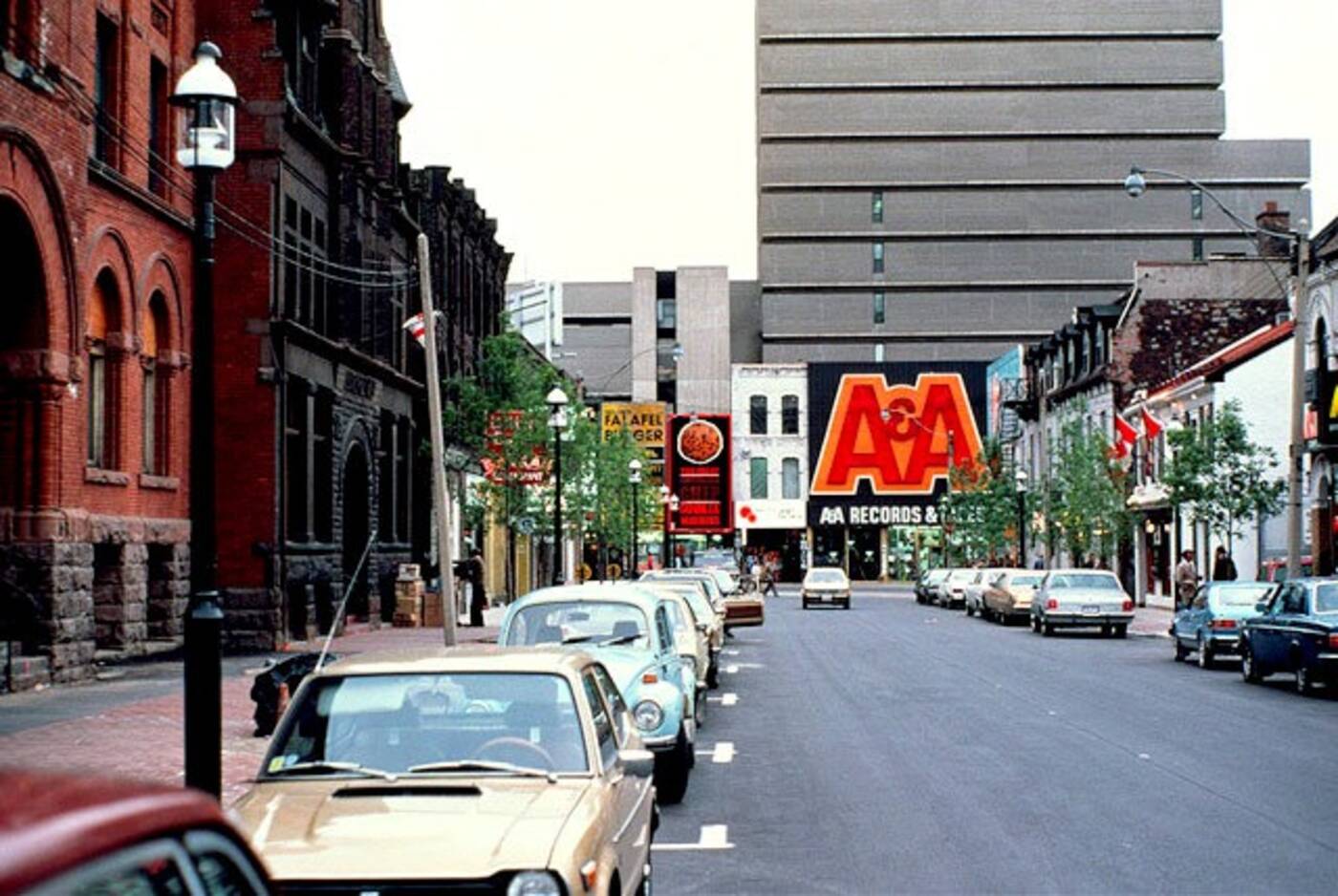 The view looking east on Elm Street in later decades. Barberian’s Steak House is on the right-hand (south) side of Elm Street, where there are Canadian flags. Photo via Toronto Archives.

In September 1961, Sam Sniderman (Sam the Record Man) relocated his store to 347 Yonge Street, two doors south of A&A Records. The two competitors were now almost side by side. This was convenient for customers, as they were able to browse the city’s two largest record shops in a single visit.

In 1971, Alice and Mac sold their business. The company that bought it expanded the number of franchises and by 1990, there were 260 of them across the country. However, the company went bankrupt in 1993.

Doug Taylor was a teacher, historian, author and artist who wrote extensively about Toronto history on tayloronhistory.com. This article first appeared on his site on April 1, 2016 and has been republished here with the permission of his estate. The article has been modified slightly.