The world's biggest DJ competition is Red Bull Thre3style and this year it's taking place in our own backyard. DJs around the world know that winning the competition can launch their careers to brand new heights, and they've been honing their skills to a science for this week. Between Monday and Saturday the battles, starting at The Drake then hitting Adelaide Hall, Mod Club, the Danforth, the Hoxton and ending at Kool Haus, will be fierce and fun. Kid Koala, A-Trak, A Tribe Called Red and a ton of other big name producers and DJs are in town.

Here are 5 reasons why you'll want to spend this weekend sleeping in preparation.

Witness intense competition
The 2013 Thre3style will gather DJs from 21 different countries including Germany, Albania, Brazil, Azerbaijan, Japan, Ukraine, and Malaysia for its ultra heavy competition. The key to Thre3style is short, diverse sets: each competing DJ gets 15 minutes to spin at least three different musical genres, and points are earned by making it sound cohesive, fresh, and oh-so danceable. By dancing to each challenging set, you're almost a judge yourself.

See the stars (from the front of the club)
Judges this year include Kid Koala and Skratch Bastid, and performers include Jazzy Jeff, Skratch Bastid, Ali Shaheed Muhammad (A Tribe Called Quest,) Maseo (De La Soul,) A Tribe Called Red, A-Trak, Torro Torro, AutoErotique, Grandtheft, Keys N Krates, Thugli, and a Kid Koala playing a "Vaudville Set." Each event is going to be pretty intimate until the finals take over larger-sized Kool Haus on Saturday, so you can get an up close and personal glimpse of each DJ through the sweat dripping down over your eyelids. See the line ups night by night here.

Gain some new insight
The Thompson Hotel will host panels all week at 4pm, including a presentation by Toronto's DJ Denise Benson called The History of Music in Toronto on Tuesday, DJ Jazzy Jeff presenting The History of DJ Gear on Wednesday, and a Q&A session with Fool's Gold Records founder A-Trak on Thursday. All look intriguing if you have even a mild interest in DJ culture. Panel and Q&A events take place in The Thompson Hotel's 1812 Lounge.

Forget it's November by going out dancing every night
From The Drake to Adelaide Hall, Modclub, the Danforth, the Hoxton and finally Kool Haus, Thre3style gives Toronto a chance to experience amazing dance music (did we mention these are the top 21 up and coming DJs in the world?) every single night, right as the days get shorter and TTC riders get mopier. Thre3style DJs want to make you dance. You want to be happy. This relationship makes sense. 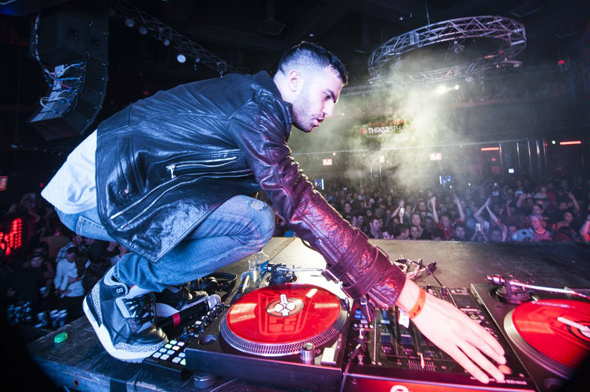 Feel the Toronto pride
The biggest DJ competition in the world is happening right here in Toronto. Even if you'd rather don triple plaid and knock whiskey back at the Dakota till last call than sweat till 4 at Toronto's after hours spots, that's still something to be proud of. Vice Magazine sent Thre3style judge DJ Jubilee up to Toronto ahead of time to knock on the doors of renown Toronto DJs and producers including Alixander III, Zed's Dead, Bruce Trail, Gingy, and way, more. The vid is a great intro (or voyeuristic peek) into Toronto's thriving (and really dude-heavy, damn) dance scene. I recommend checking it out.