After five years of worldwide touring, collaborations with the likes of Pharrell, Coldplay, and Knife Party, and massive hits like "Save the World" and "Don't You Worry Child," Swedish House Mafia are hanging it up to pursue new ventures. To SHM, that means going out with a two month, 27 show tour of South Africa, Australia and North America. Toronto's first of two back-to-back shows was Friday in the giant Rogers Centre for an energetic 16+ crowd of house fans, opened by the trio's long time friend Otto Jettman (of Otto Knows). 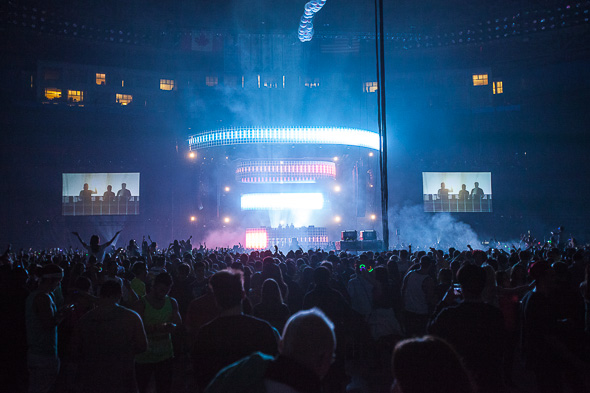 Swedish House Mafia opened the show by jumping straight into the epic hit "Greyhound," sending the massive coat check line streaming towards the dancefloor, with hundreds still lined up outside the venue. Despite its many entrances and immense size, the Rogers Centre can still be easily choked with partygoers on a deadline. Fans were slick and stylish, cold and coatless, but mostly dayglow and neon. Clothing was kept to a minimum and energy at a maximum.

The crowd was feeling the love as "Don't You Worry Child" hit the air and the communal mood was uplifted with revellers swaying and hugging as the tune swept over the stadium. Emotion and spirits were high with smiles all around as the trio stood high above the crowd in their LED-screened megastructure stage and presided over the multitudes. 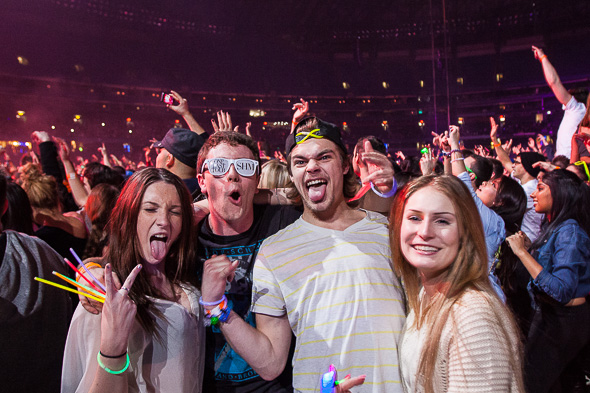 "Antidote" brought the vibe to an electrical storm, as feet left the floor and hands filled the air during the show's second half. Swedish House Mafia even sprinkled in some much-loved Moombahton with Nadastrom's "!ll," and the surprise made my night.

When "Save the World" hit the speakers the crowd exploded with appreciation, and a chorus of voices belted out the anthem along with the speakers, carrying the song as Swedish House Mafia cut the audio and let the voices take over.

All the hits from SHM's final album Until Now were in the mix. Superbly blended and sprinkled with more than a few 'don't collapse on us' breaks, the beats were hot and heavy, though at points the hits got barely more than a minute's play. 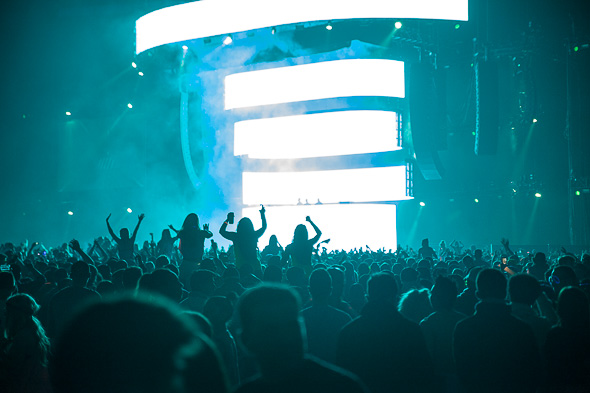 Balloons, confetti, lasers, pyrotechnics and enormous video screens combined to create the ultimate farewell party. All the ingredients of a killer show were fully in play and the crowd ate it up.