Day one of The Virgin Music Festival is coming to a close, with Dave Grohl (pictured right) and his band Foo Fighters tearing it up on stage.

Right now he's introducing his band, egging on the audience to push for his percussionist to do a triangle solo. Grohl's banter is getting increasingly vulgar as he readies the crowd for "his ass-shredding triangle solo."

He's taking swigs of a cold beer and belching into the microphone with full force. Charming. But the crowd doesn't seem to mind. It's all rock 'n' roll!

The crowd-surfing is being kept to a minimum and security's been pretty tight and incident-free.

The biggest cheers come during songs Times Like These and My Hero, the latter of which started slow and easy but finished with a screaming flourish, leaving the audience cheering for more, which is followed by Monkey Wrench. 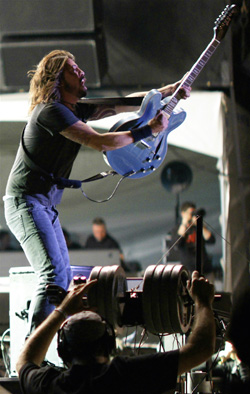 Grohl's onstage banter is becoming more inaudible as he gets more loose and wasted on stage. All par for the course, I guess.

"You guys ready to go home or what?" he taunted the crowd. "Cause we've got a fuckin' curfew, you know?" Then, as the stage lights start strobing, they launch into the more recent The Pretender, leaving the crowd cheering for more....

"You guys are all full of shit. I hope you get voted off the island and go home," he cajoles.

Then he gives the crowd one last song, The Best of You. And I mean really given 'er.

The crowd, tired and exhausted from a long set and longer day, slowly filter across the island to begin lining up for a ferry back to reality. At least until tomorrow.

Stay tuned for more exclusive blogTO VFest coverage from day one, as well as live reports tomorrow from the islands.