Something in the Water Brewing Co. offers a curated list of unique beer flavours made on-site, in addition to a fun snack menu.

The brand started off as a contract brewery operated by Steve Waugh, Rick Tanton, and Mike Lee in 2020. They were determined to create a concrete list of good quality sour beers that they could sell to LCBO and the Beer Store. 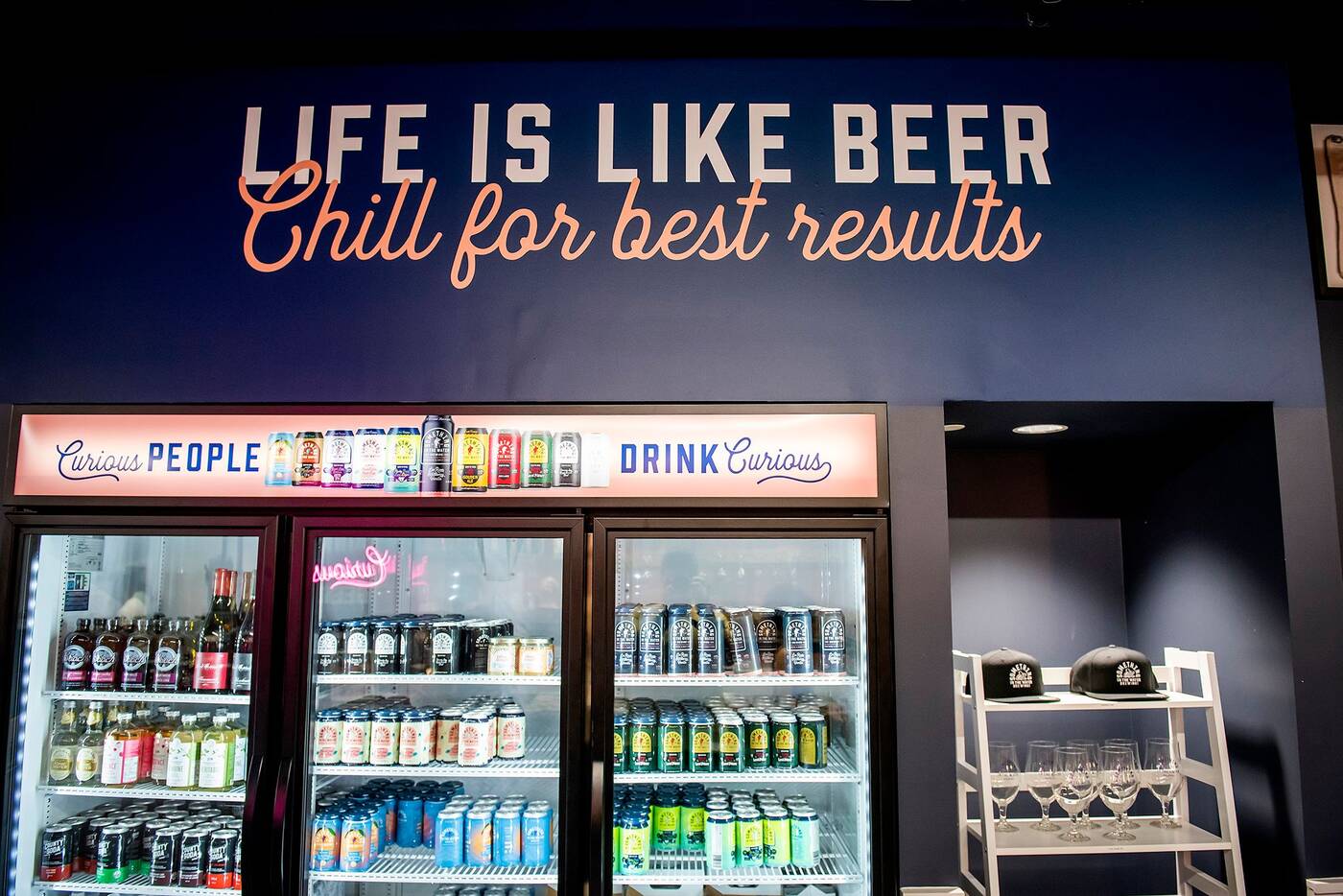 With restaurants and bars being closed for lockdowns, retail was the only space where people could get their hands on products from Something in the Water.

Issues arose with the long, difficult process they went through to get approved for selling in the LCBO. Finally, when they got access to do so in the Fall of 2020, Waugh and Tanton realized their beer was competing against  hundreds of others sold in stores. 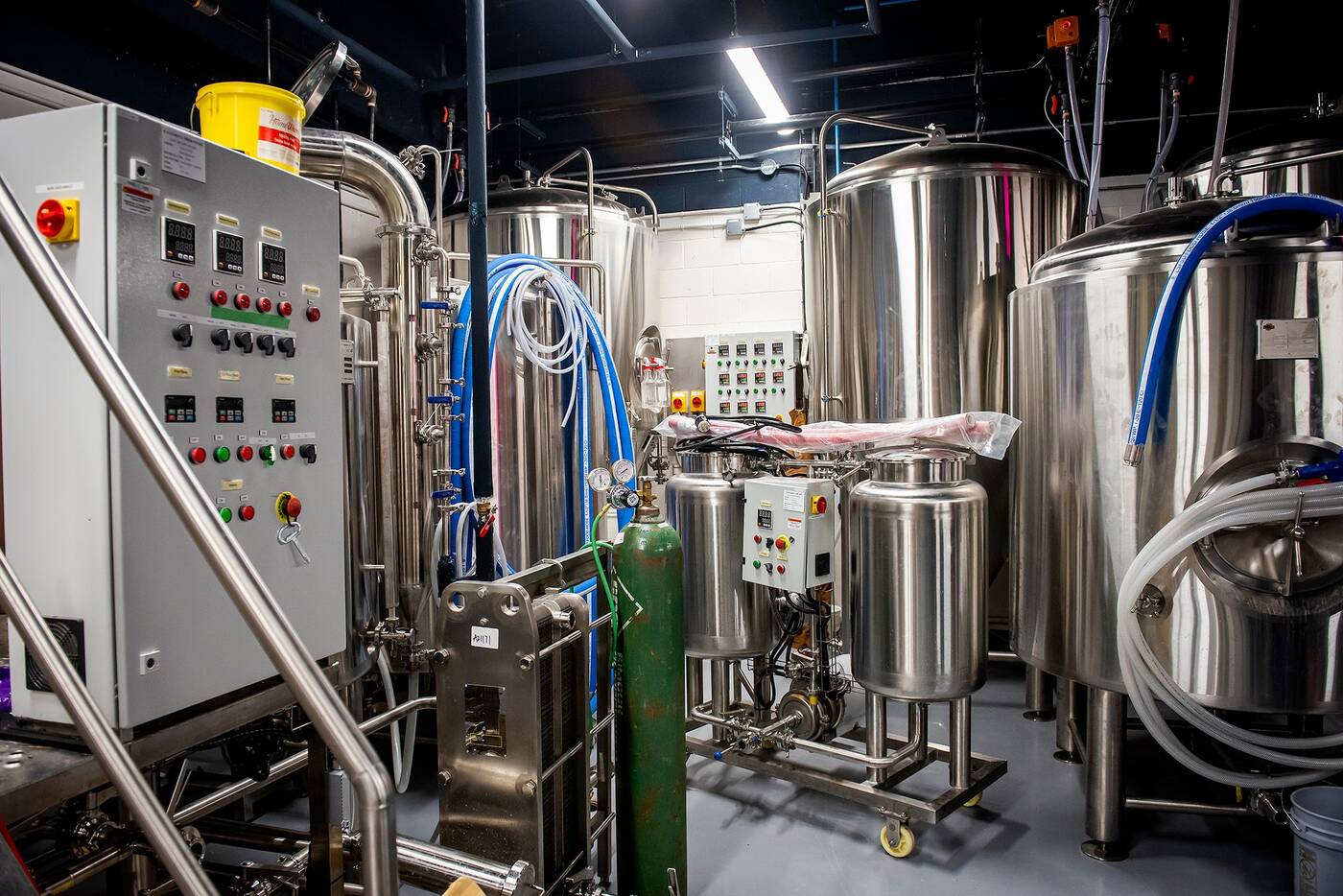 Being a contract brewery, Something in the Water brand was making all of their product out of a general facility that wasn't owned by them.

Waugh and Tanton realized that by letting go of this space and creating their own brewery, in addition to operating as a bar and retail store, they could launch into the brand they wanted to be. 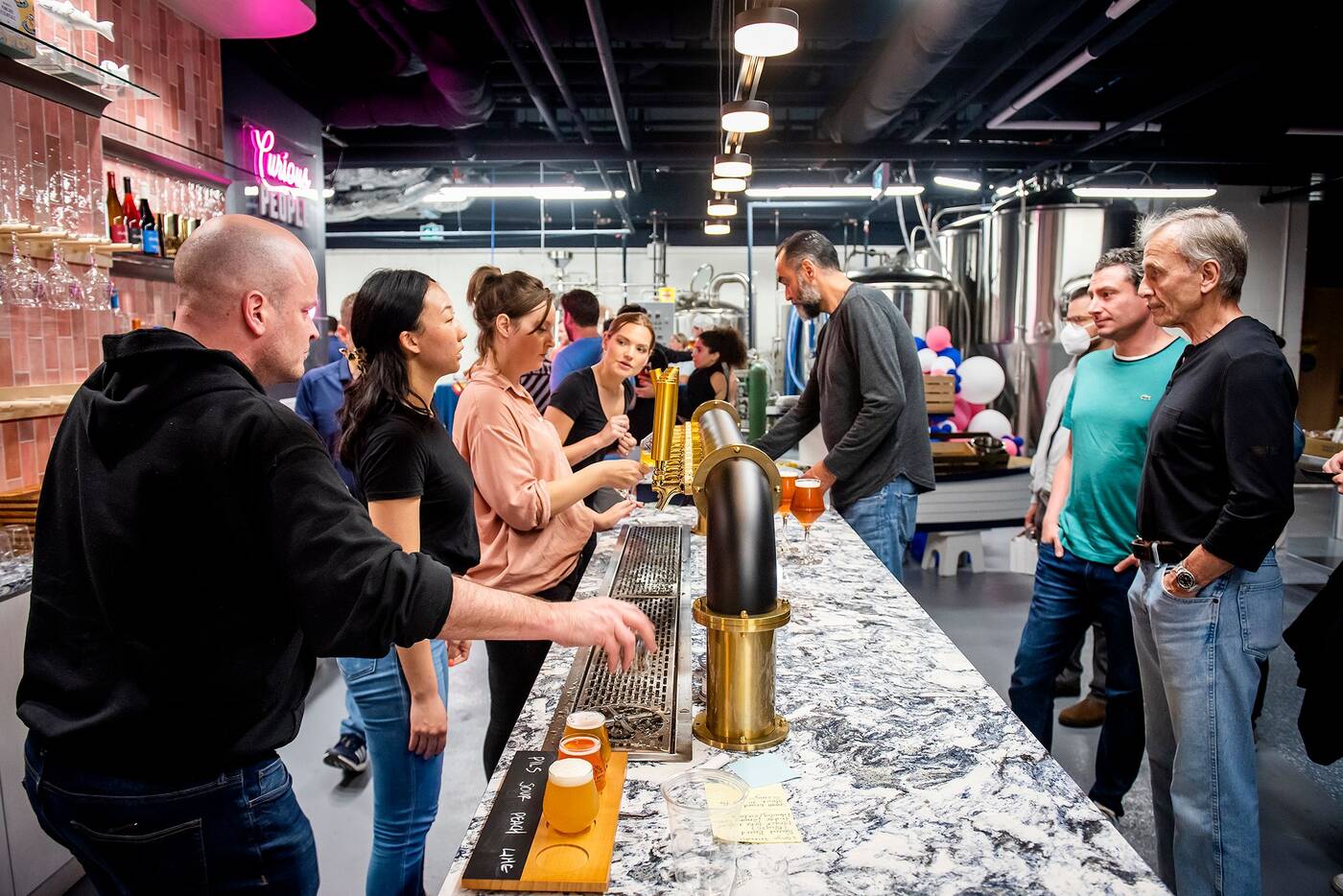 And that's exactly what Something in the Water Brewing Co. became. This isn't the wood-filled, masculine, rough around the edges environment that we're used to seeing with breweries turned into bars.

It's actually the exact opposite. Large brewing machines sit in the back, but are hardly noticed from the pink velvet couch and tiles that decorate the front end of the space. 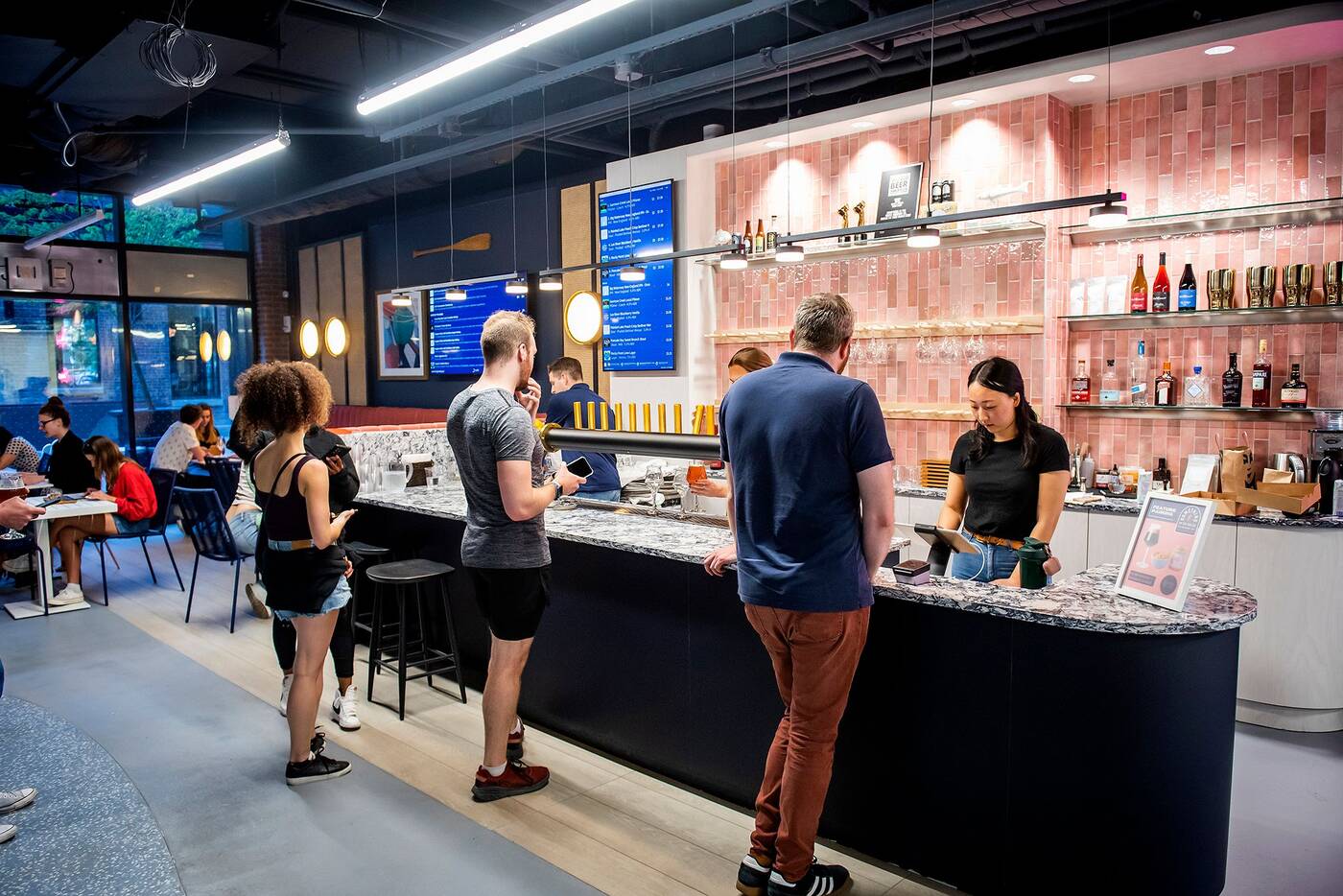 It really encapsulates, "an afternoon by the water" type of vibe. With Muskoka chairs lining the entrance and canoe paddles hung up on walls. 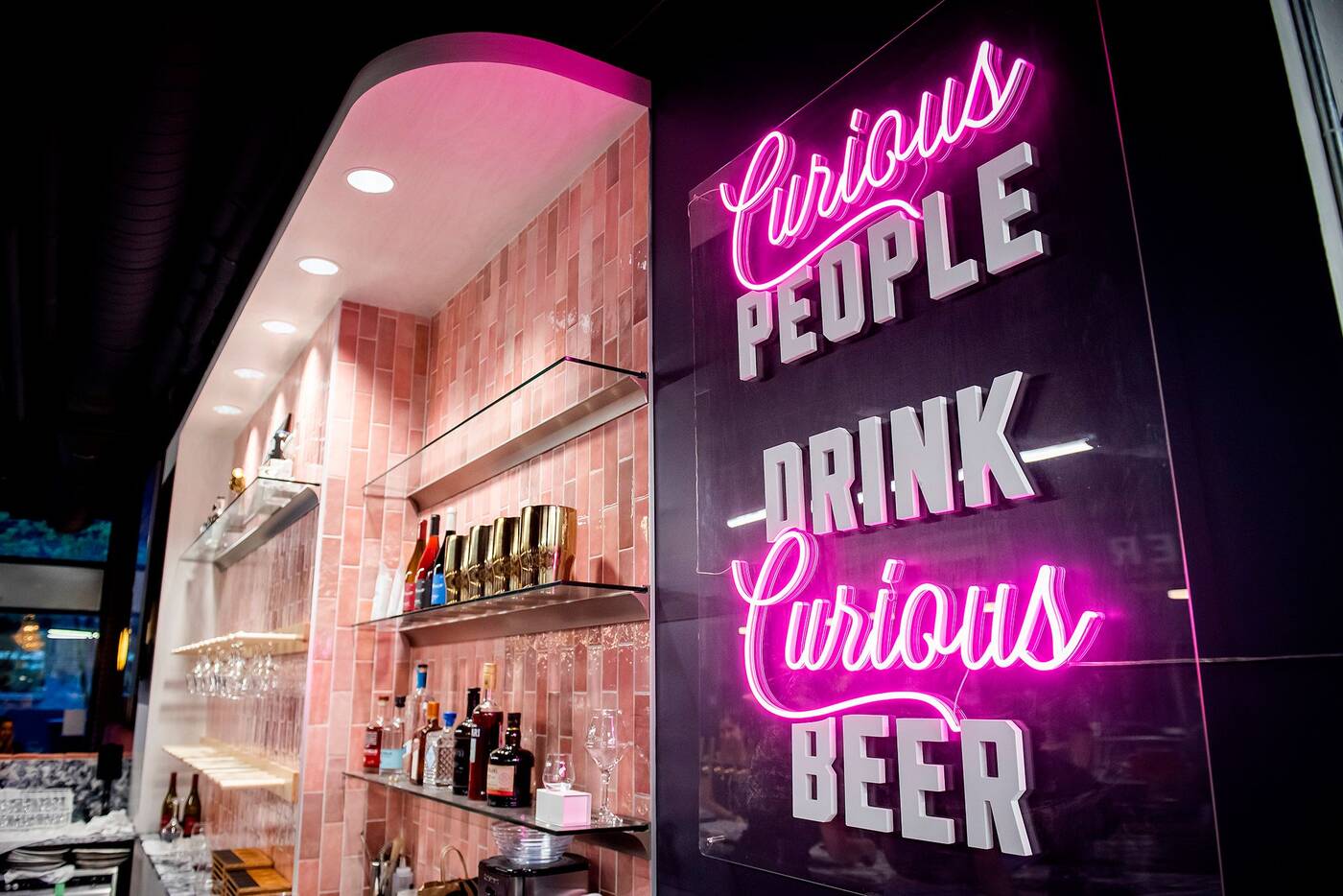 This philosophy at Something in the Water Brewing Co. encourages beer lovers and newcomers to be interested in what they're drinking, and spark conversation about how their brew is made and where it comes from. 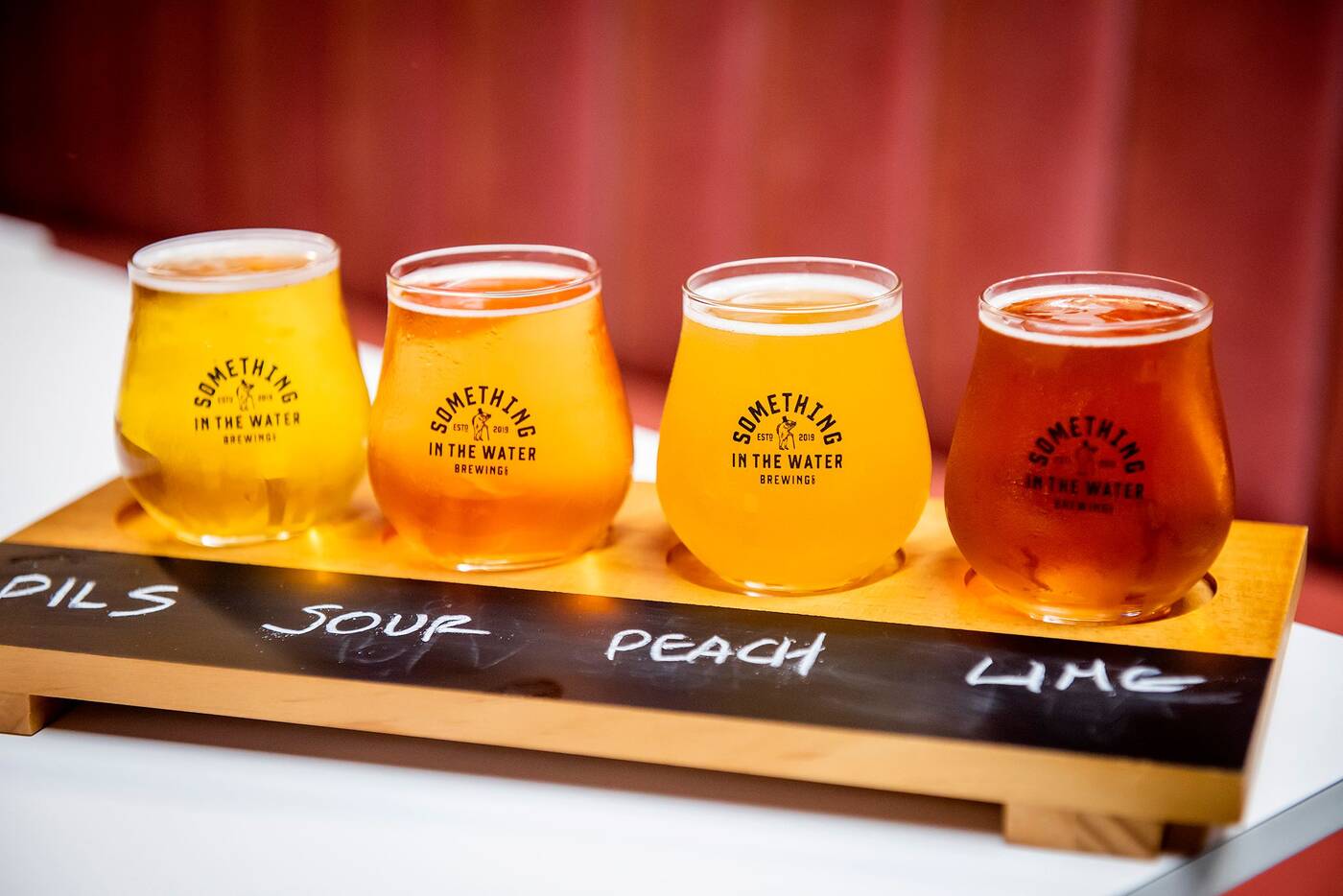 The best thing about beer flights is that you can get a little bit of everything. At Something in the Water, one of these ($12.00) will give you a taste of four out of the six tap beers on their menu.

If you're really into one specific type, order a pint instead they're all priced the same at $7.50. 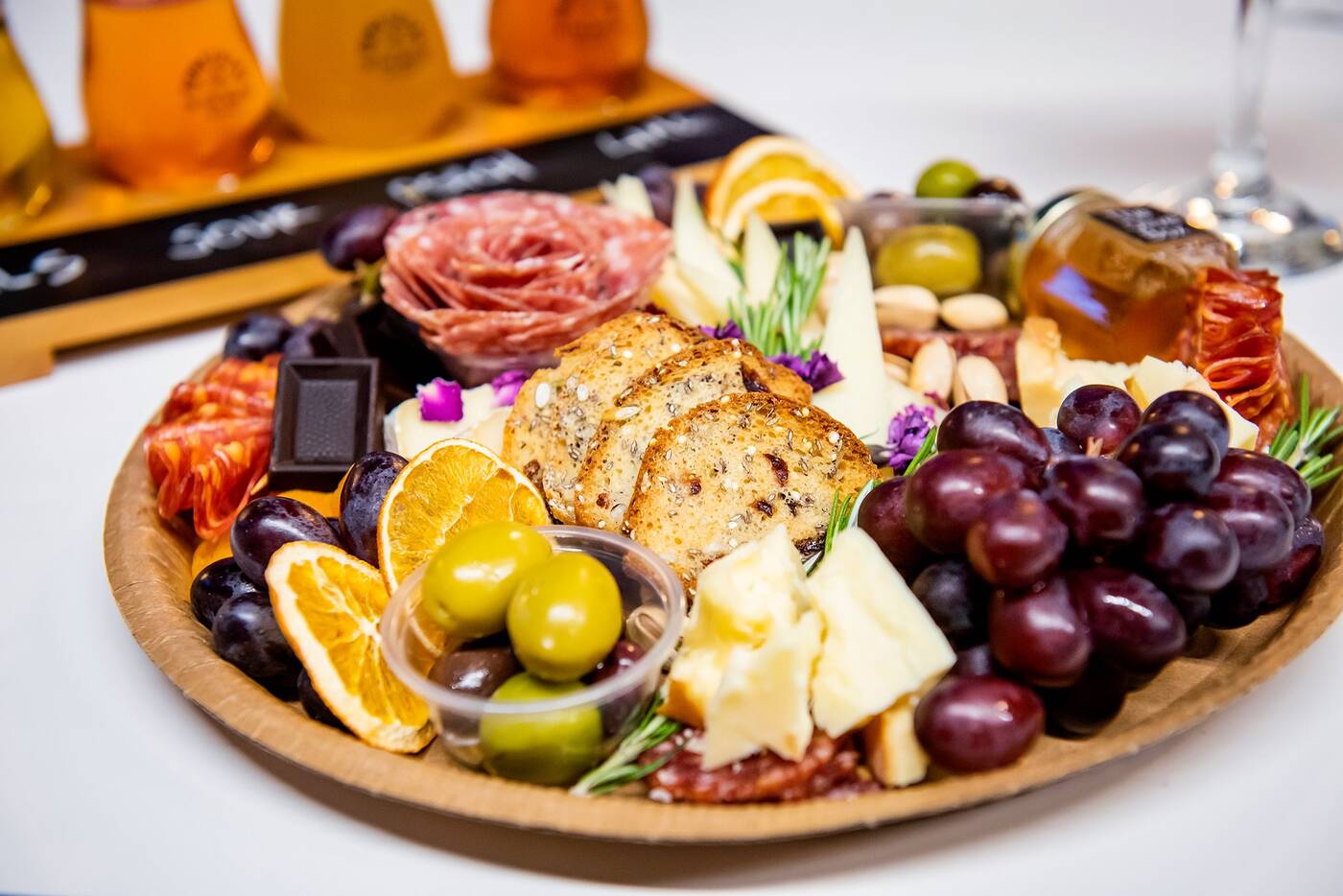 A charcuterie board ($40.00) is the perfectly paired snack to share with your flight of beer. They are curated by The Olive Box, a female-owned, local company that's known for their combinations of meat and cheese.

This board deliciously samples more than that, with grapes, dried apricots, olives, pieces of dark chocolate and different crackers to bite on. 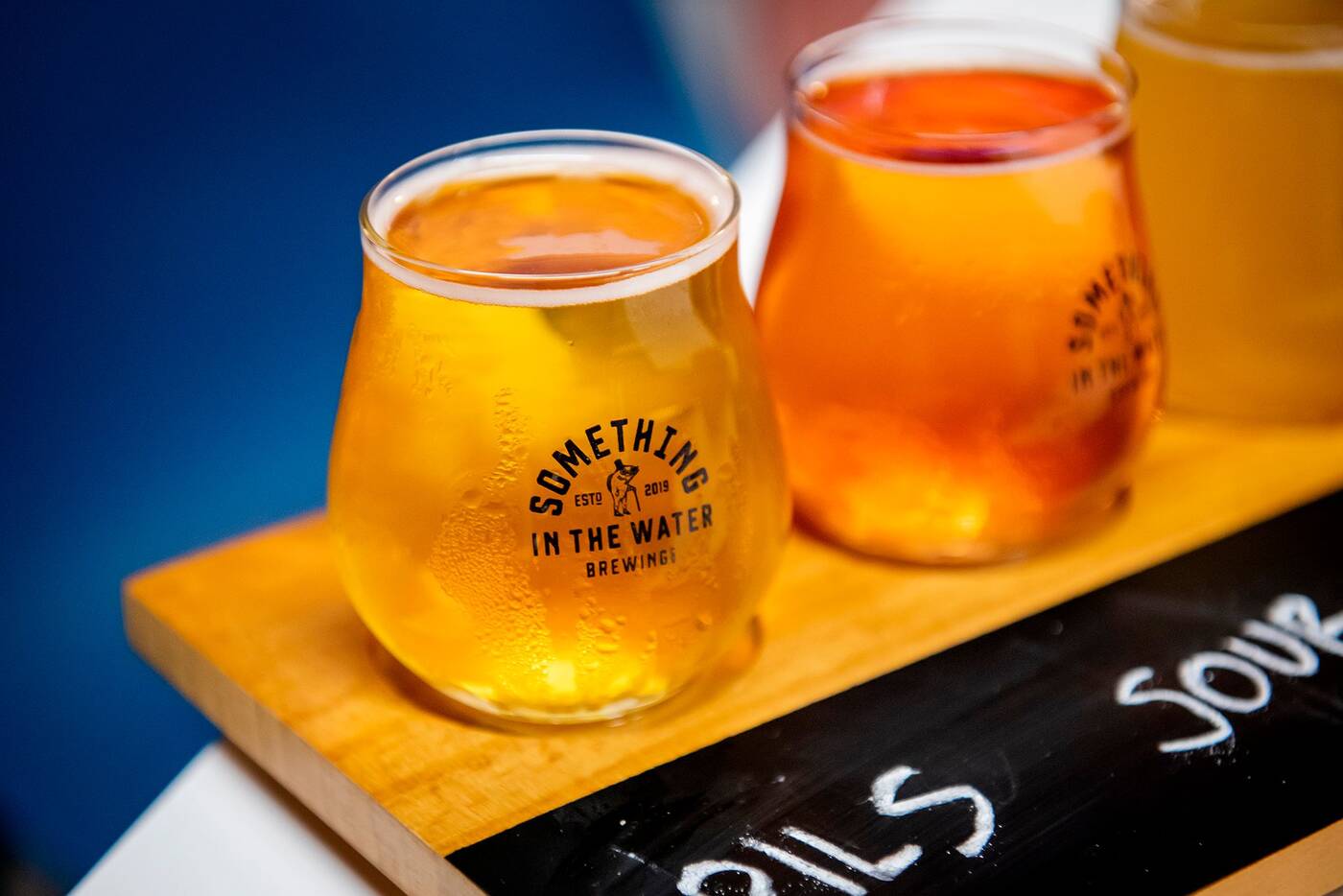 Back to the beer, let's start with the Garrison Creek Pilsner, considered to be a farm to glass brew. Meaning, all of the ingredients used to make it, were sourced within a 3 hour radius of Something in the Water Brewing Co..

Super light and airy to taste, but still maintains a tad of hoppiness that you want in a standard brew. 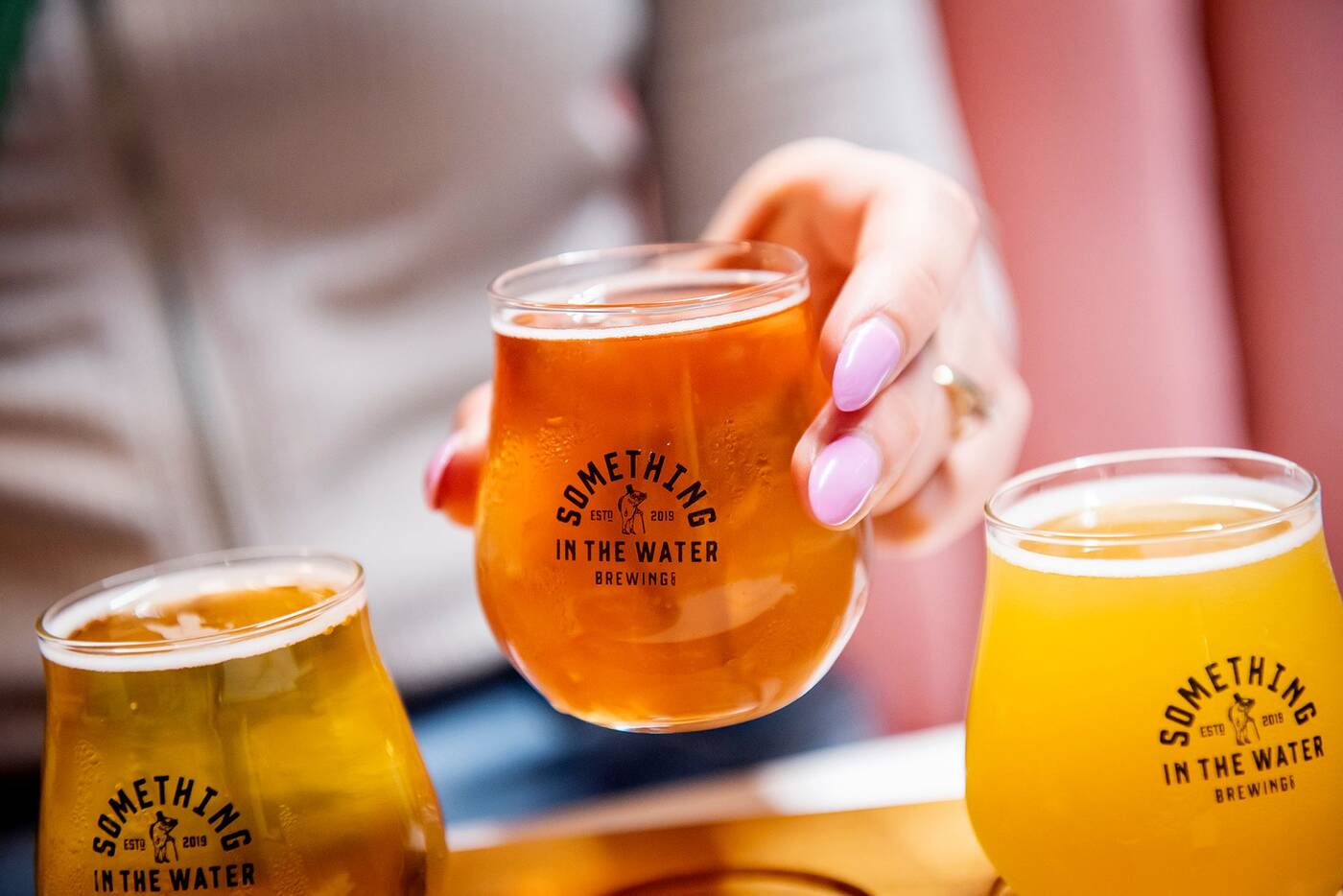 The Lee River Blackberry Vanilla Sour is one of the very first beers launched by Something in the Water and has now turned into their bestseller. It doesn't have the pungent hit you'd get from other sour beers and is best described as a rose wine meets cider. 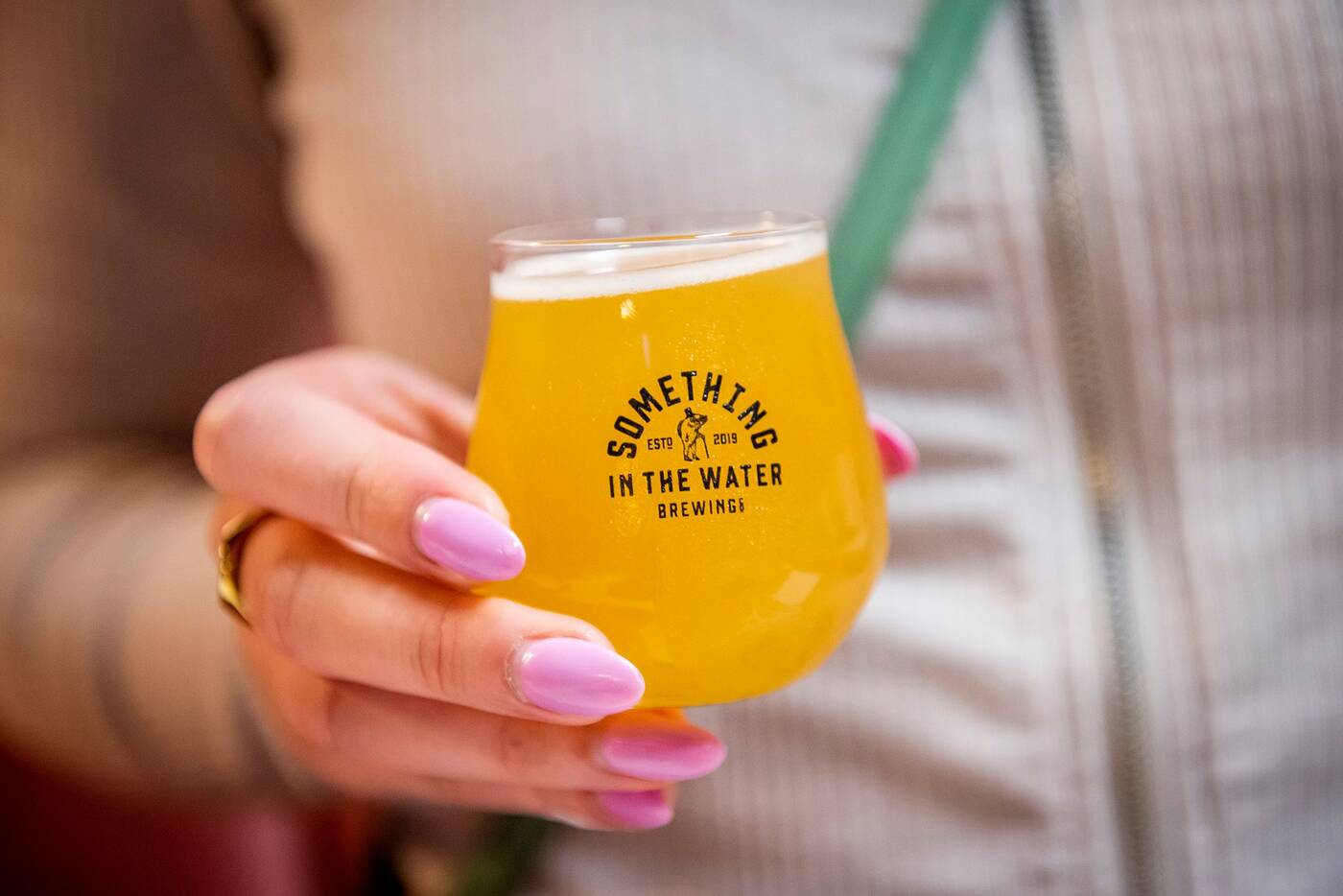 Painted Lake Peach Crisp was my personal favourite as it's another one that's very light in taste, an easy drink with 3.8 per cent alcohol, and the fruityness really comes through in the flavour.

Although peach is used for the summer, the brewery plans to switch up the fruit they use depending on the season. 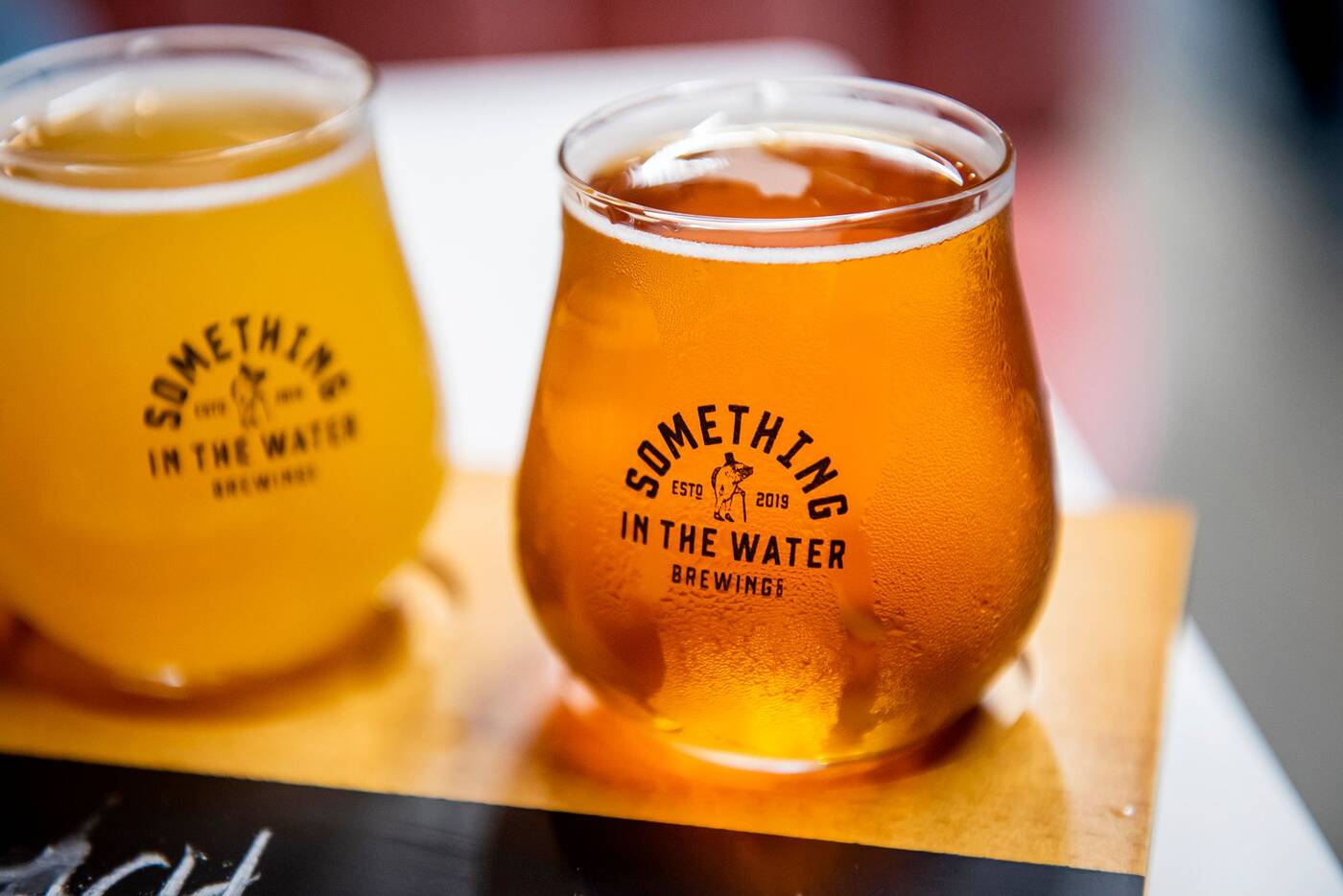 The Rocky Point Lime uses a Vienna-style German lager and layers of apple, orange and lime zest for extra flavour. I'd say this is similar in taste to a Corona, but doesn't need the added lime juice like you would with the big brand beer. 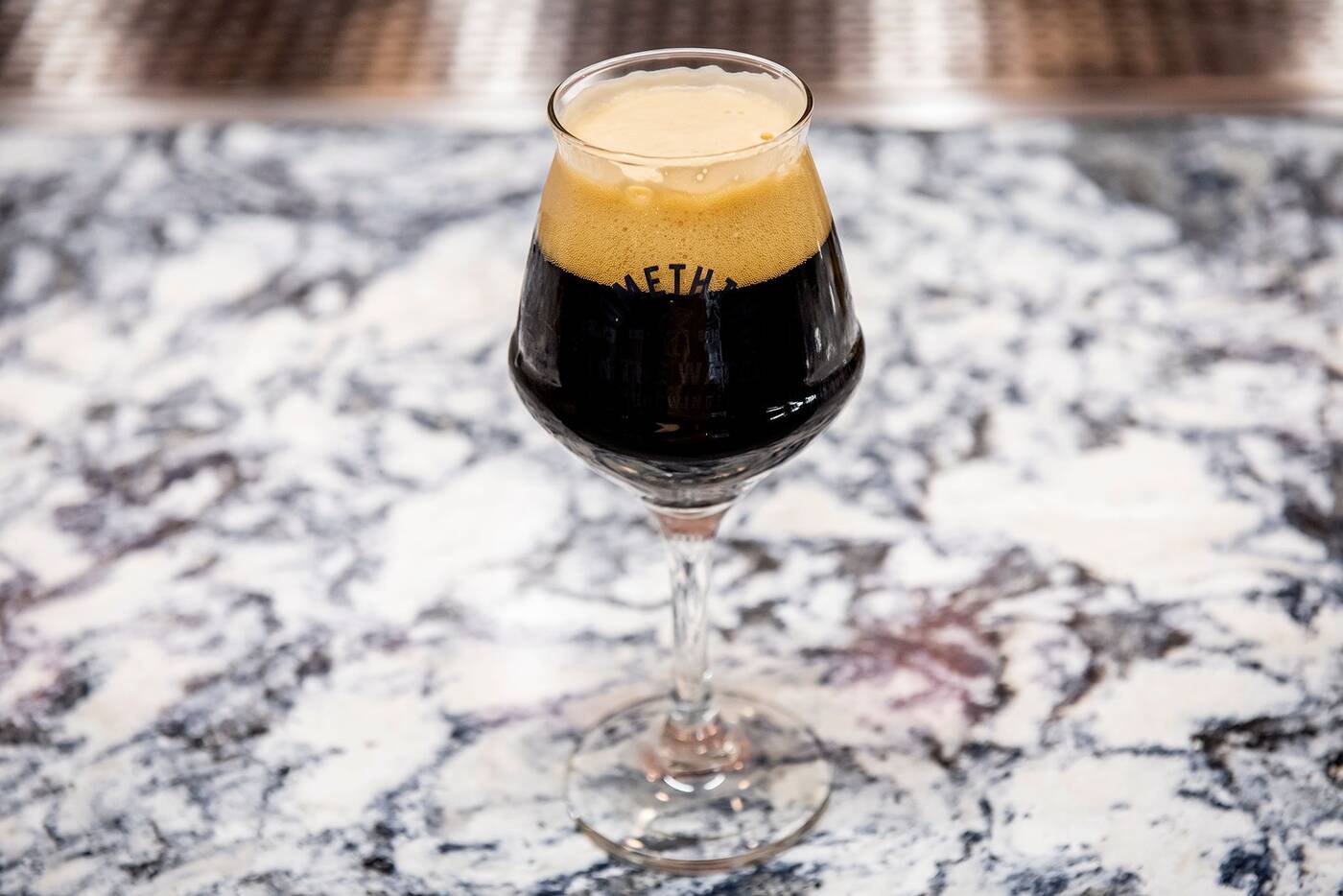 I've never been the biggest fan of dark beers, however the taste of the Pancake Bay Sweet Brunch Stout ($7.50)  changed all that for me.

The aroma of coffee is really present which adds a nice touch to the rest of the ingredients which honestly do resemble a recipe for Pancakes. Rolled oats, milk, sugar, maple syrup come together to make this non-bitter easy drinking beer. Plus, it won 2nd in the World Beer Awards. 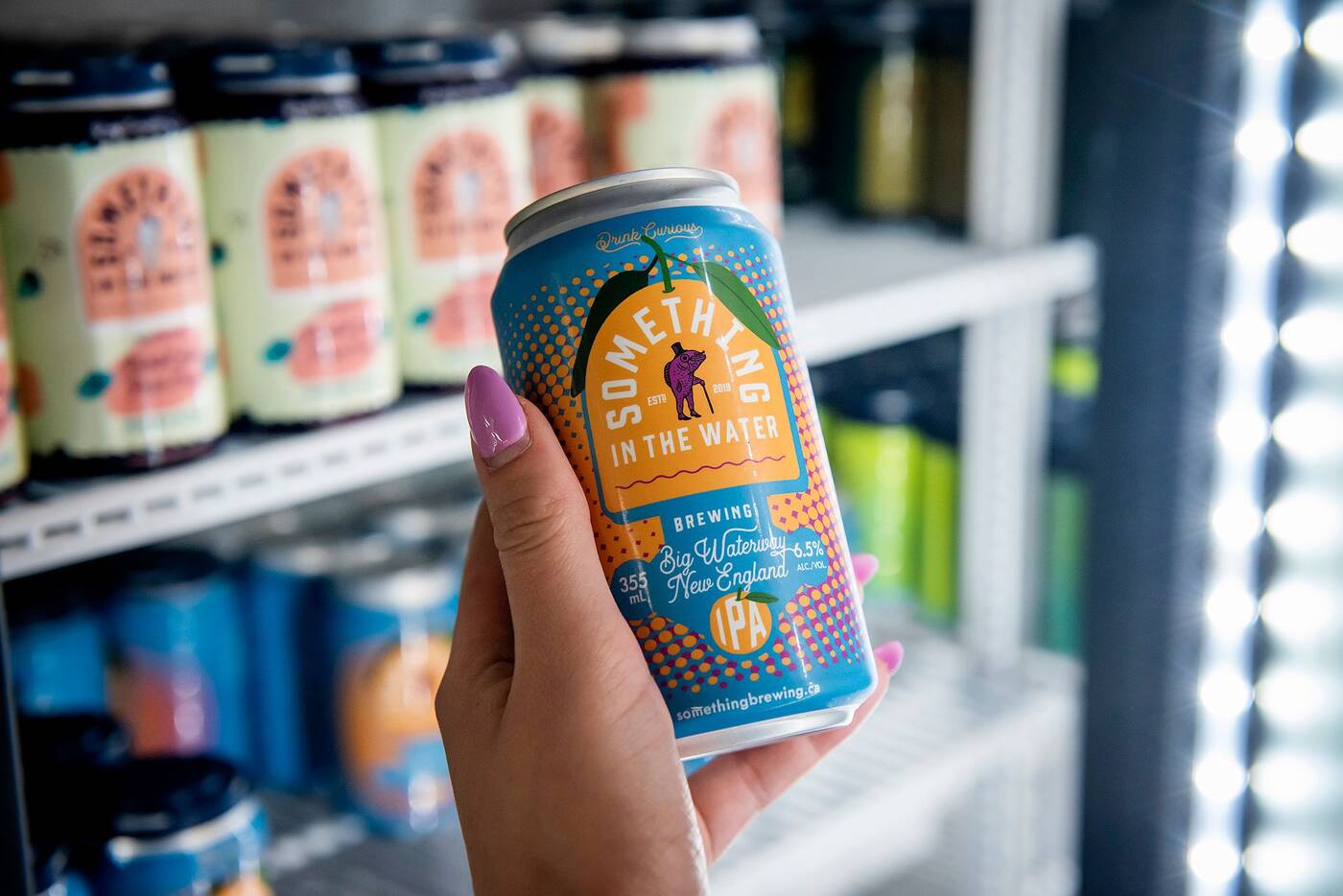 Leaving the brewery for the night? Feel free to browse through their selection of drinks inside their beer fridge where you can get all of their tapped beers in can form, plus a few others sold just for retail. 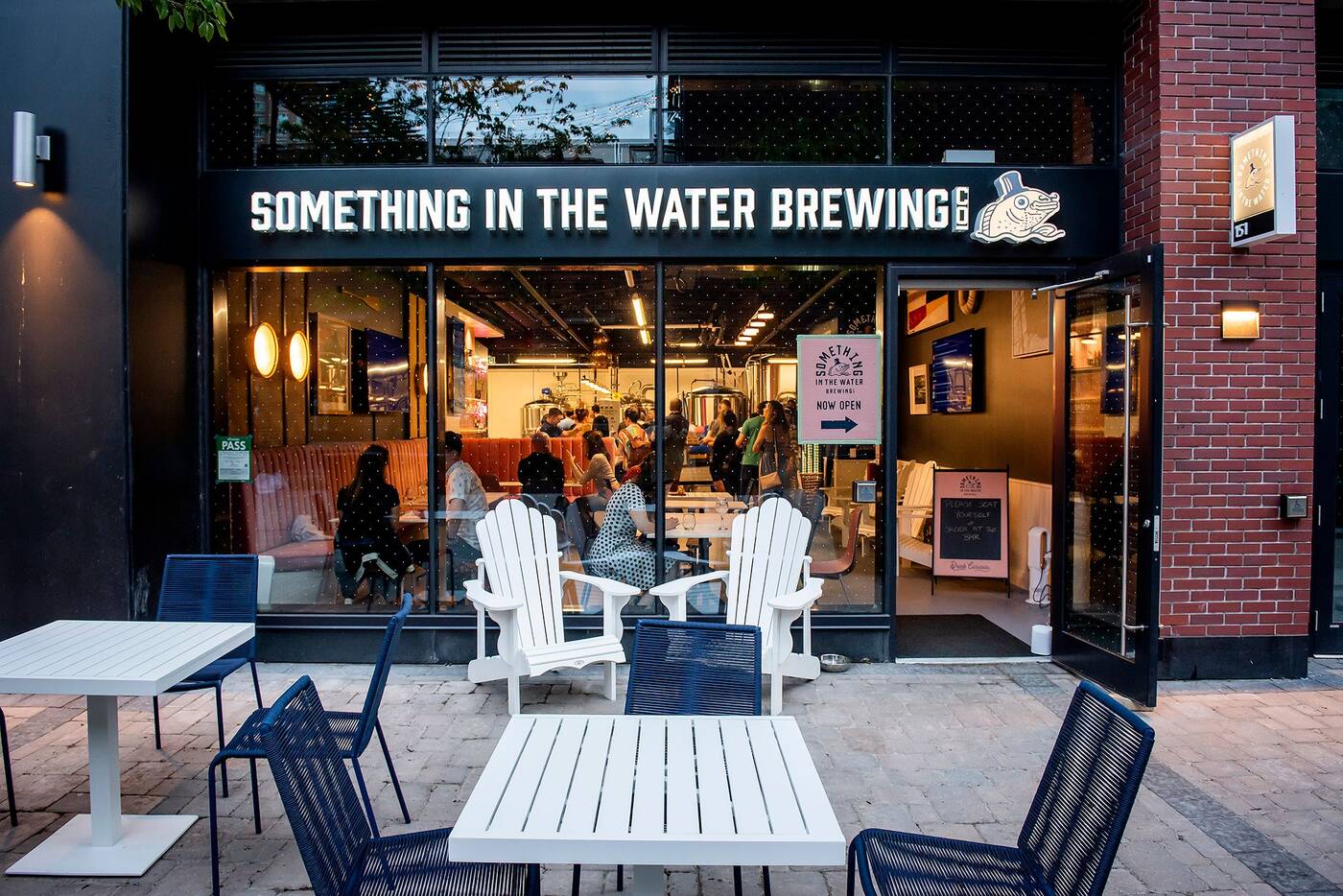 Something in the Water Brewing Co. is tucked into a retail strip inside the heart of Liberty Village. The mass amounts of dog owners walking by will be happy to know they're allowed to bring their fur friends inside.