The Epicure Shop has been a Cabbagetown fixture since the '80s. Helmed by Patty Junior (who does the buying, as well as creates the lavish holiday gift baskets), and with ample help from her family, the independent grocery is a go-to spot for local meats and cheeses, and unusual food stuffs. 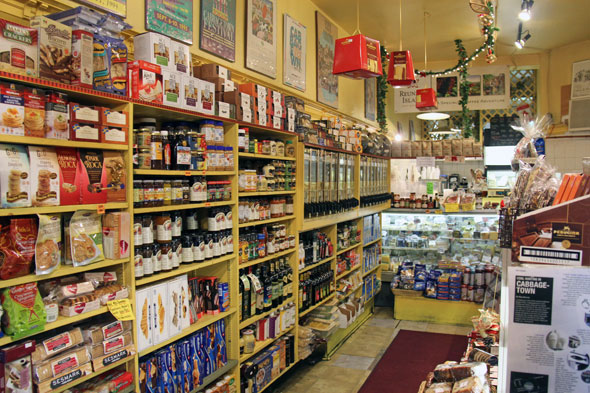 At one time, there were three Toronto shops under the Epicure umbrella, but Junior eventually shut down the other two and returned to her Cabbagetown roots. Perhaps the most impressive feat of the shop is that it manages to cram so much stock into such a cramped space. Jars are propped on shelves high enough to necessitate a stool, each inch of shelf space is used to its full potential, and flavoured olive oils share counter space with lush, no-skimp-on-the-butter donuts. It's a shop of curiosities for food lovers, and you could easily spend an hour inching through the small space. 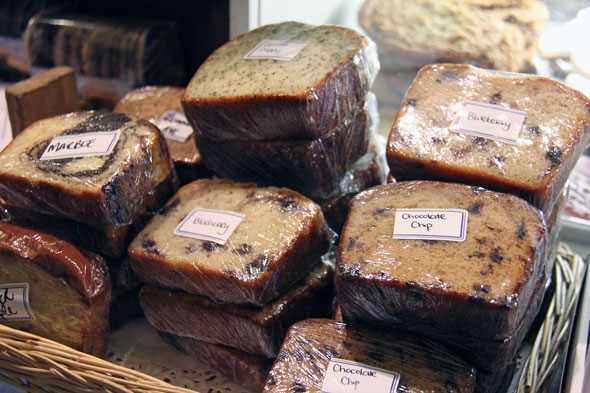 When Junior first opened the store, she focused on Italian products (due to her Italian background) but now you'll find a range of Ontario products including cheddars from Maple Dale Cheese (including a 9-year-old cheddar on special for $7.99/100 g) and Upper Canada Cheese Company , and jams from Niagara on the Lake's Greaves . 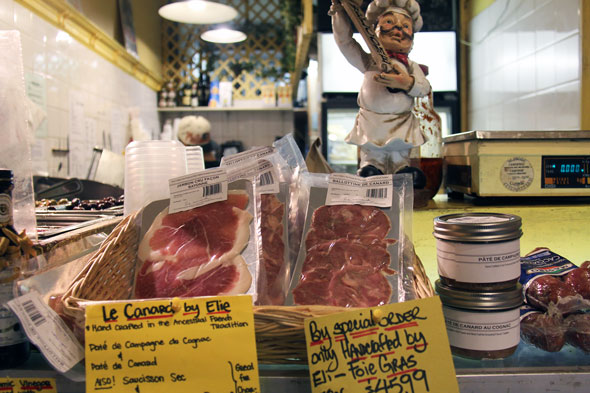 Epicure also stocks artisanal charcuterie from Le Canard ($7.99 for 100g of spiced pork tenderloin, or $8.99 for duck pate), and fresh-roasted coffees from Kicking Horse and I Deal . The shop's house blend (which can be enjoyed with their range of breakfast sandwiches, including options with peameal for under $5), is from Reunion Island . 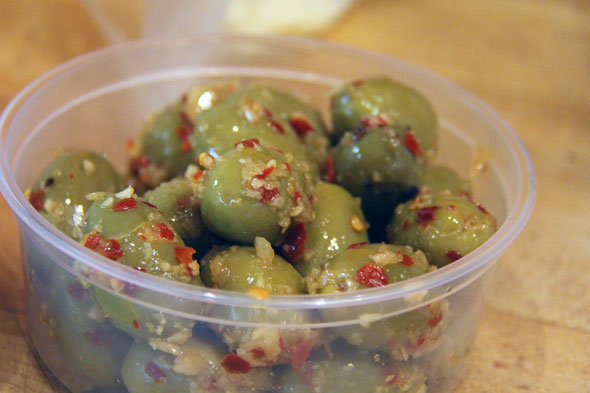 "People have left the neighbourhood and come back for the olives alone," Junior tells me, and indeed, the large green olives flecked with chili peppers ($1.69/100g) and kalamata olives ($2.19/100 g) are remarkably flavorful. You'll also find the usual deli meat suspects such as Genoa salami ($2.39) from Mastro, as well as some other meats from Wagener's Meats , and Mennonite salami ($2.69/100g). 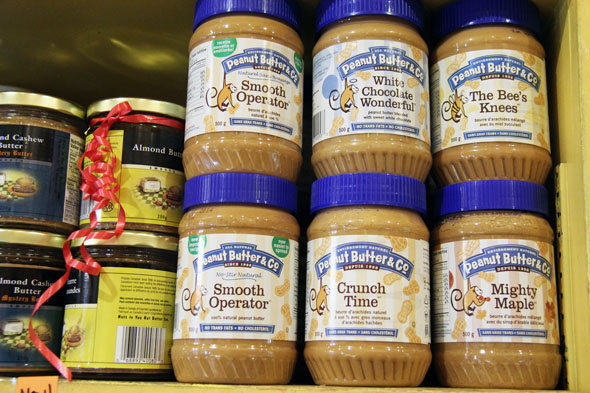 Aside from the stock, what no doubt draws repeat customers and regulars is Junior herself, who is ready with an array of unusual gift ideas, stories about the origins of the food, and a handful of her personal favourites, including hand-made, all-natural tortas from Spain ($5.99), non-filtered flavoured olive oils from Morocco ($10.99), and peanut butter from Peanut Butter and Co. in flavours such as white chocolate and honey. They've also introduced a gluten-free section. 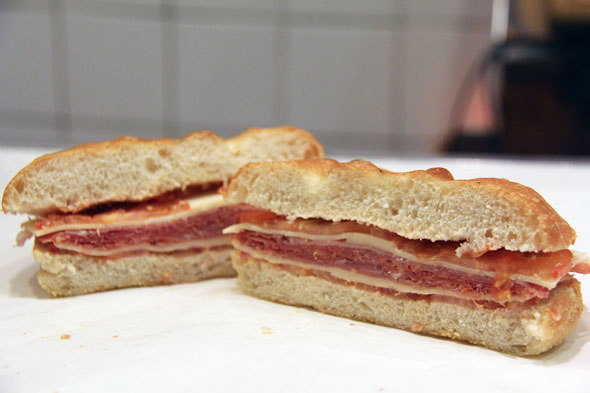 They also offer daily lunch specials (soup and sandwich for $6)--not too shabby. Or, you can opt for panini and gourmet sandwiches ($6.99) such as the Northern Italian--a blend of pesto, asiago cheese, roasted peppers and veggies-- or the staff picks created by her family. The Leo Sicilian Sub, with prosciutto and hot calabrese, is a stand-out. 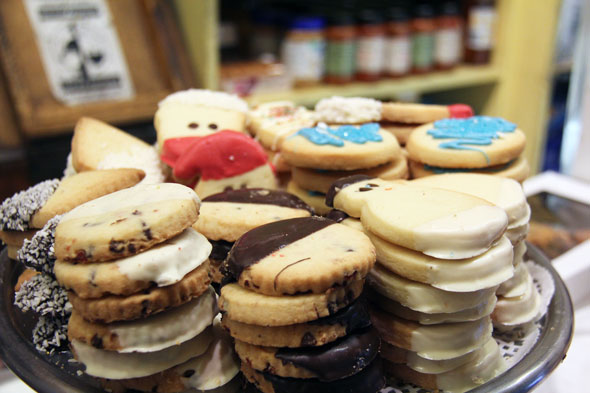 I've never been a particular fan of shortbread, but when I'm told that the same woman has been making the cookies for the store for 20 years, I have to sample some ($0.85 each), and they do rank high among the best, most butter-rich shortbread I've ever tasted. On the sweet side of things, interspersed among homemade gingerbread cookies, are Dufflet pastries, and a variety of pies, packaged biscuits, and loafs. 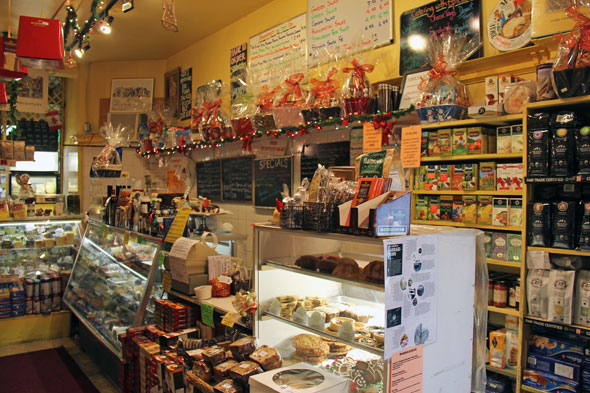 "I've been around for such a long time," Junior tells me, "that I'm able to pick the best from a variety of different companies." Her prices are also kept reasonable. "I don't gouge," she says. "I'd rather sell 20 than 1." 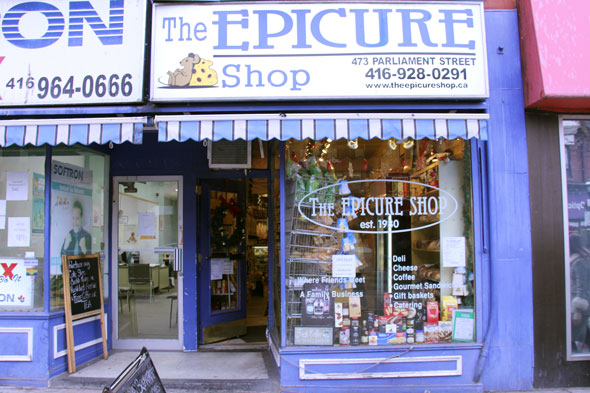