On March 1, 1996, British actor Rowan Atkinson appeared as Mr. Bean at the Eaton Centre to autograph copies of his newly released VHS tapes.

The result was a celebrity mobbing the likes of which Toronto had never seen before, and hasn't since. 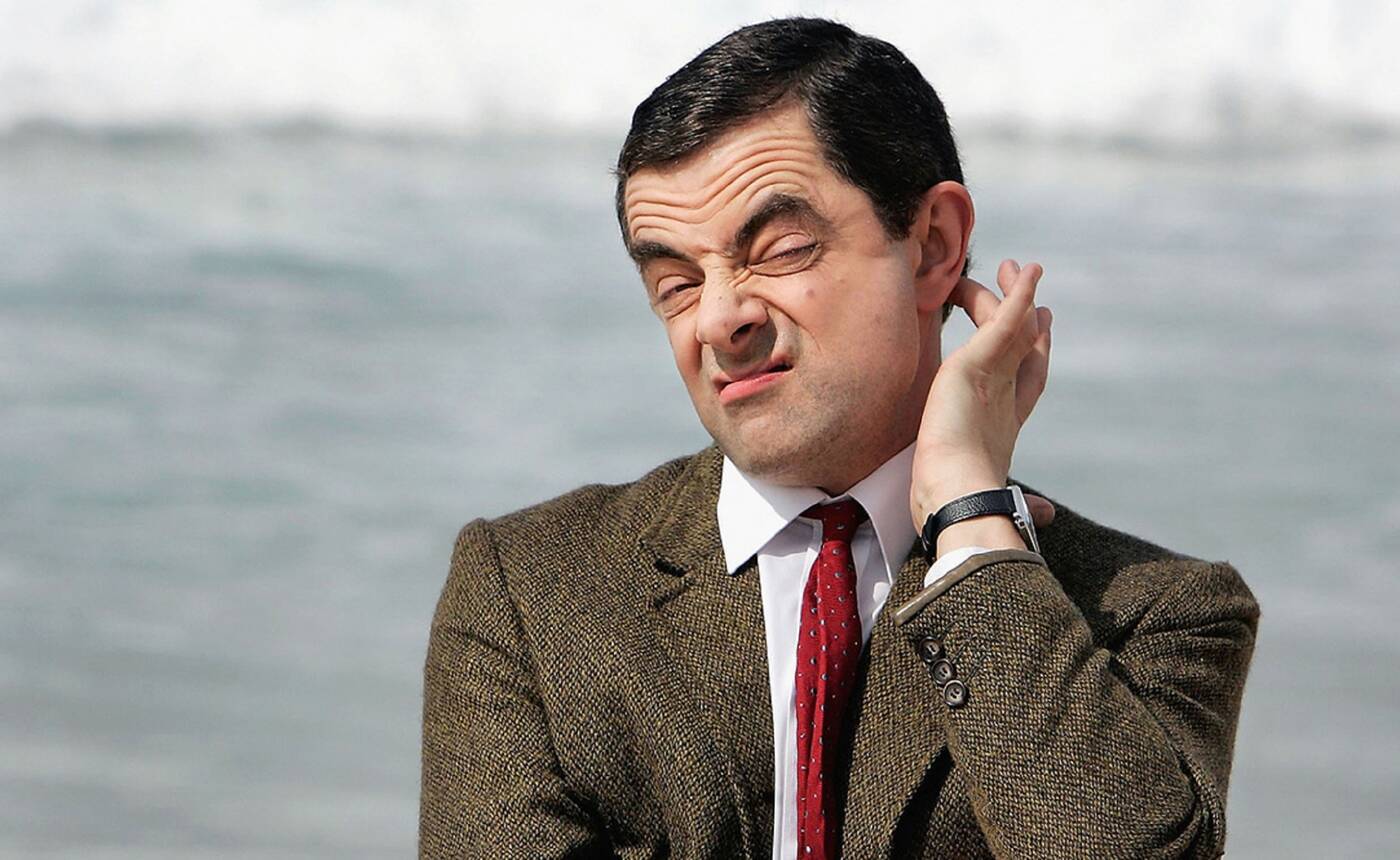 Mr. Bean made his debut on UK Television on January 1, 1990. Photo courtesy of Prime.

Created for British Television, Mr. Bean first aired on CBC in 1990 and quickly become a world-wide phenomenon. A total of 15 episodes were produced between 1990 and 1995, and later 2 feature films – Bean and Mr. Bean’s Holiday - and an animated series were produced.

The endearing but awkward character of Mr. Bean had actually been test-piloted in Canada at the 1987 Just for Laughs festival in Montreal.

Atkinson insisted he perform on the French-speaking stage instead of the English-speaking stage, confusing the organizers who assumed his act would be performed in English.

Atkinson had wanted to see how his brand of wordless physical comedy would be received with a non-English speaking audience. A huge part of the success of Mr. Bean was thanks to the complete lack of dialogue, making it accessible anywhere in the world. 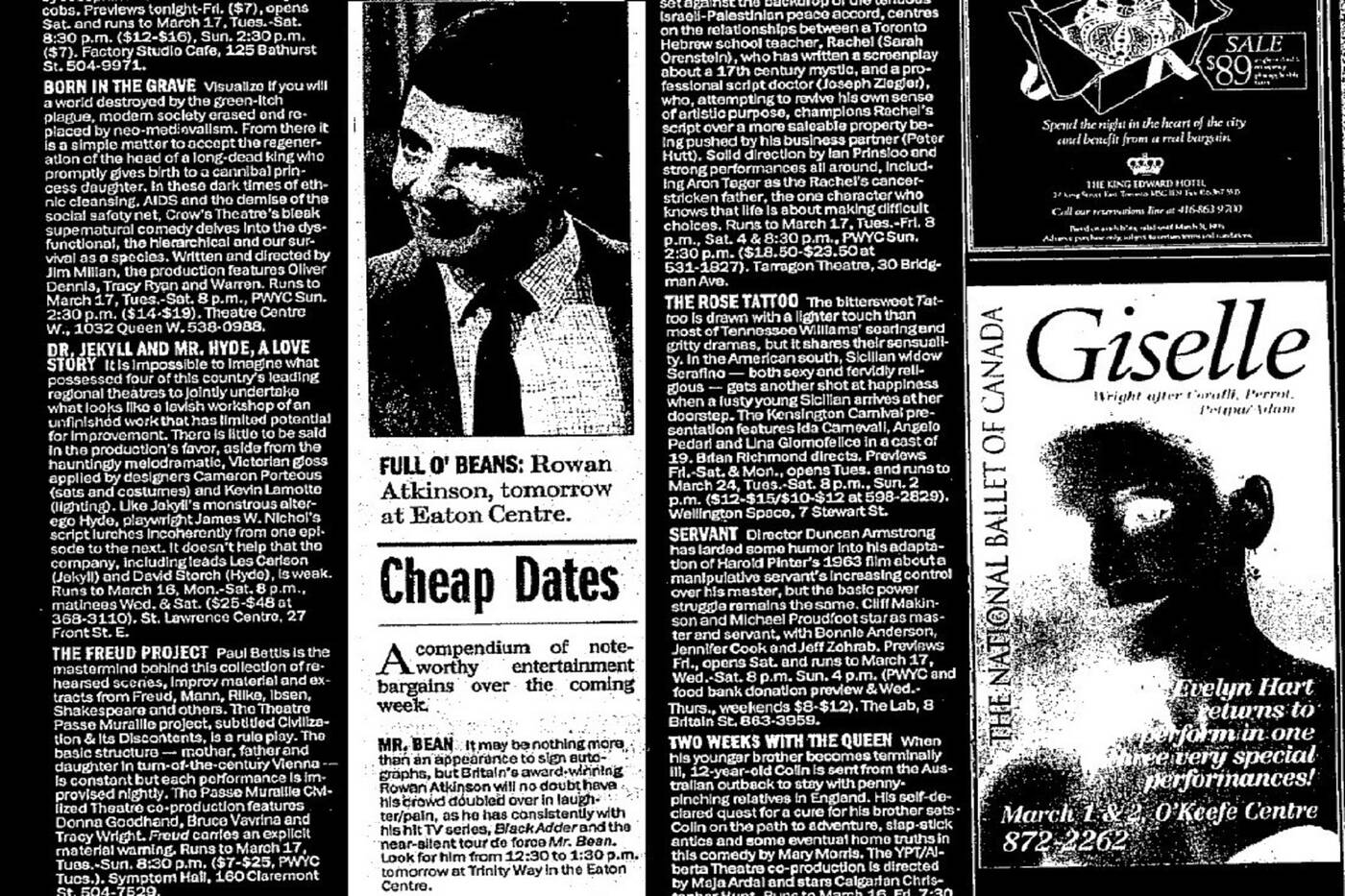 When Eaton's announced an event in early 1996 to celebrate the new release of Mr. Bean on VHS, few knew how it would be received. A similar event at Eaton's in January featuring international lover-boy Fabio had attracted a few hundred bored housewives.

Although Mr. Bean's appearance was slated to start at 12:30pm, fanatics had started lining up at 8am.

By 10am the line was so long that security began to inform patrons at the end there was no way they would get to the front of the line, even though the event was scheduled for 1 hour. 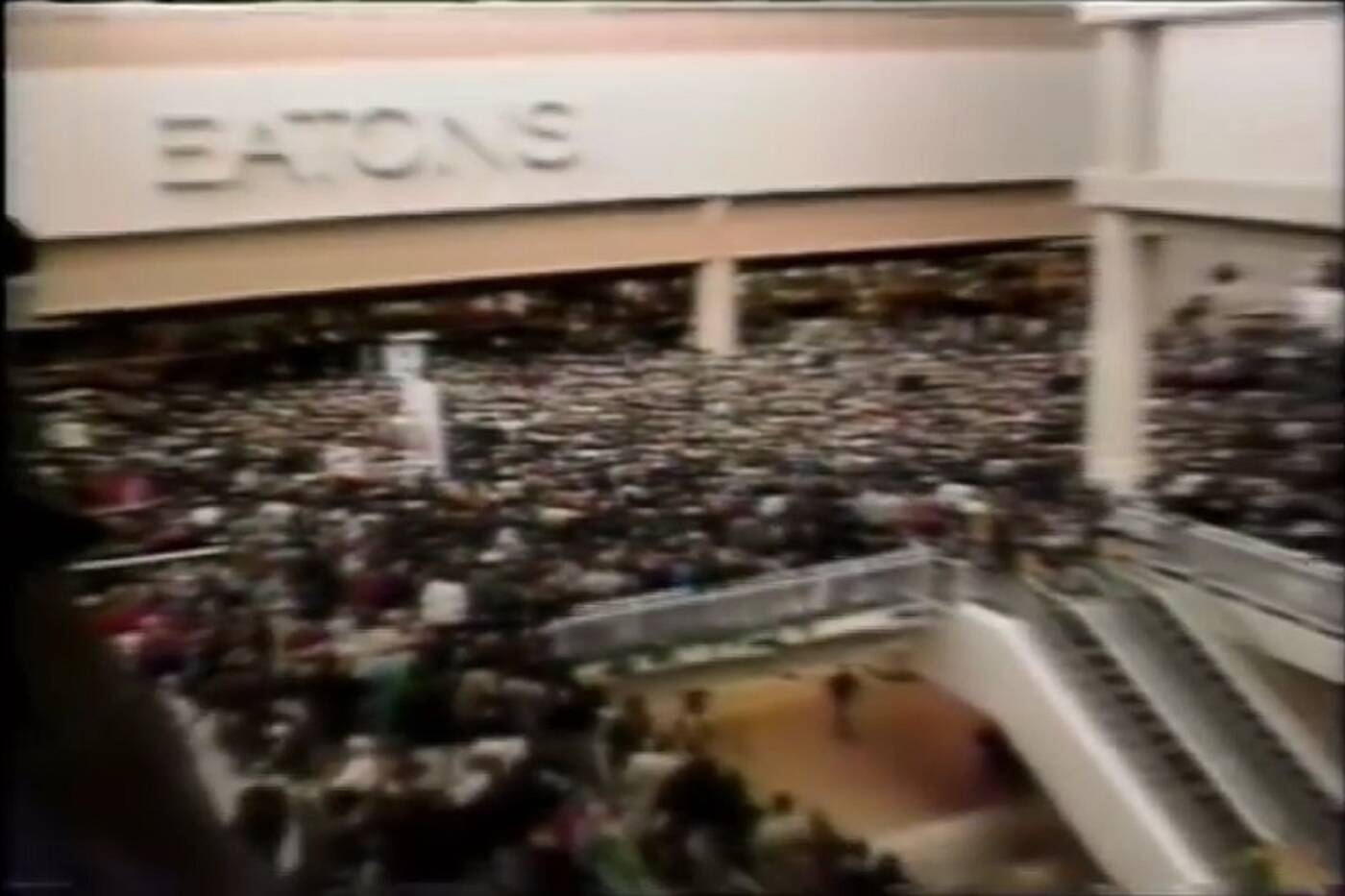 Mayhem - Too many Bean fans, not enough space. Image courtesy of Retrontario.

By noon, there was an estimated 3,000+ crowd ready to meet and greet the most famous Brit since the Beatles.

When Mr. Bean emerged with a detail of private security and Toronto Police, the whole mall literally heaved.

When it quickly became apparent that only a tiny fraction of people would get the opportunity to even see, nevermind meet Mr. Bean, many in the crowd began to push.

The whole scene became rather frightening as people began getting crushed. 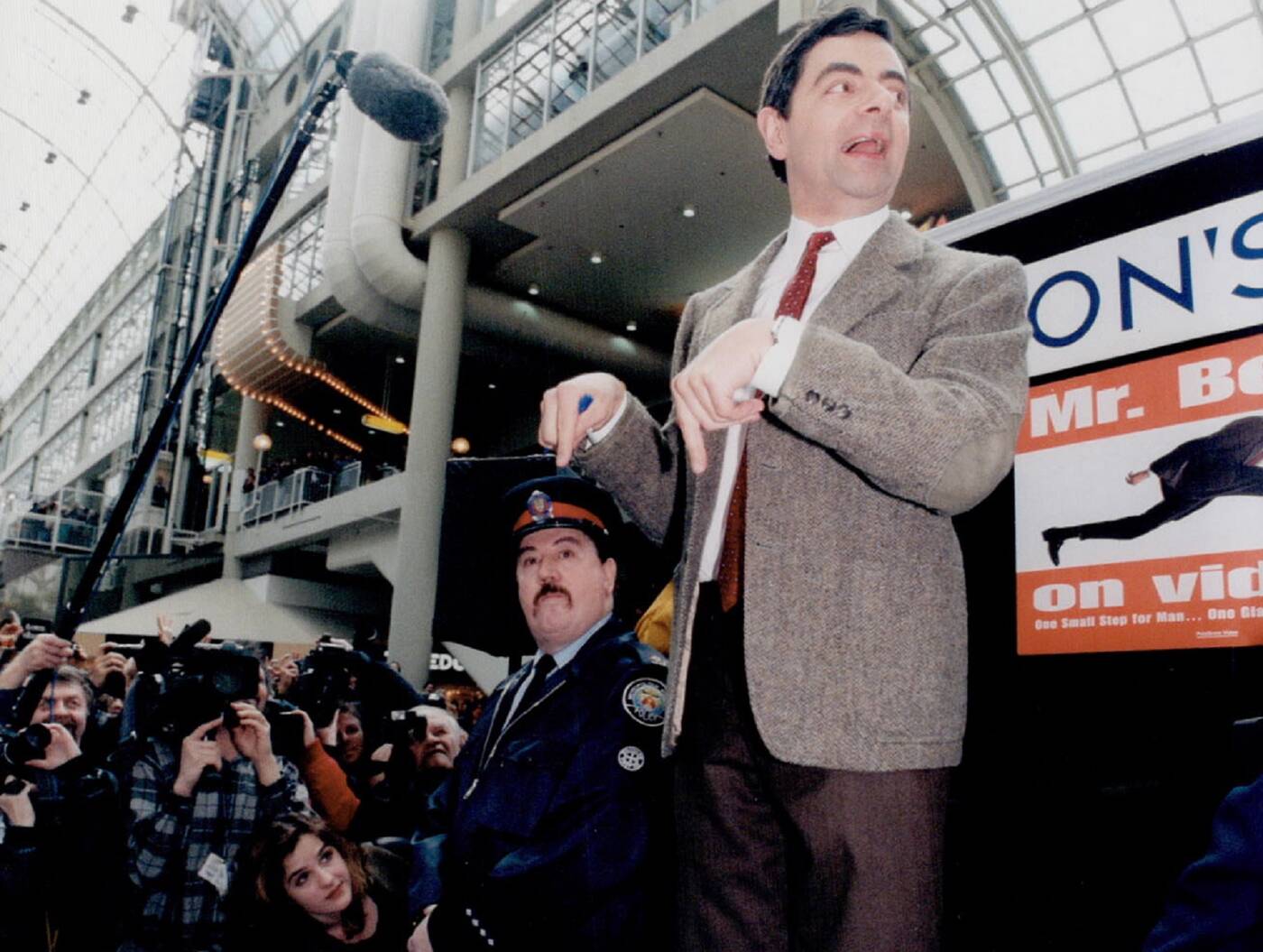 Even Mr. Bean tried to get people to chill out. Photo from the Toronto Star Photograph Archive, Courtesy of Toronto Public Library.

Rowan Atkinson immediately leapt up on top of the signing desk and in his loudest and sternest Mr. Bean voice asked that people please stop pushing.

It was a brilliant bit of showmanship that at least guaranteed everyone present saw Mr. Bean doing a Mr. Bean-ish thing in the flesh.

After a trademark wonky Mr. Bean movement, Atkinson was promptly whisked away by security after being on the floor for only 20 or so minutes. 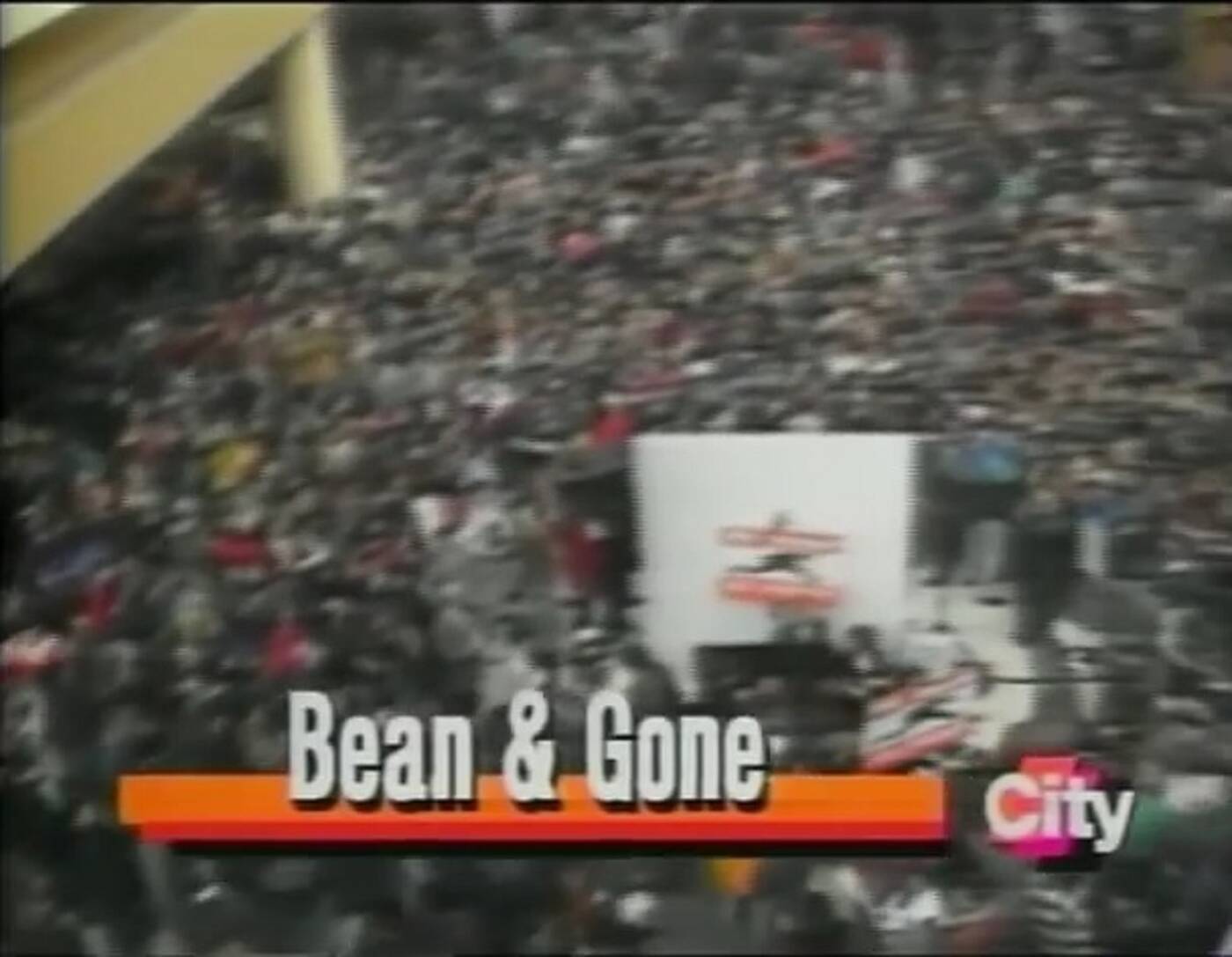 The Mr. Bean mob footage from CityPulse pops up in many Mr. Bean documentaries. Image couresy of Retrontario.

Disappointed fans dispersed, and thankfully there was no trouble.

The media ran with the story (typical headline: HOGTOWN’S BEANTOWN!), and it made headlines around the world.

The notoriously shy Rowan Atkinson often states it was the scariest moment of his life, and no Mr. Bean documentary is complete without clips of the Eaton Centre incident.

What makes the story so remarkable is that it took place in the era before social media and smart phones. Anyone who visited the Eaton Centre with the dream of meeting Mr. Bean had read about it in a newspaper or heard about it on the radio. 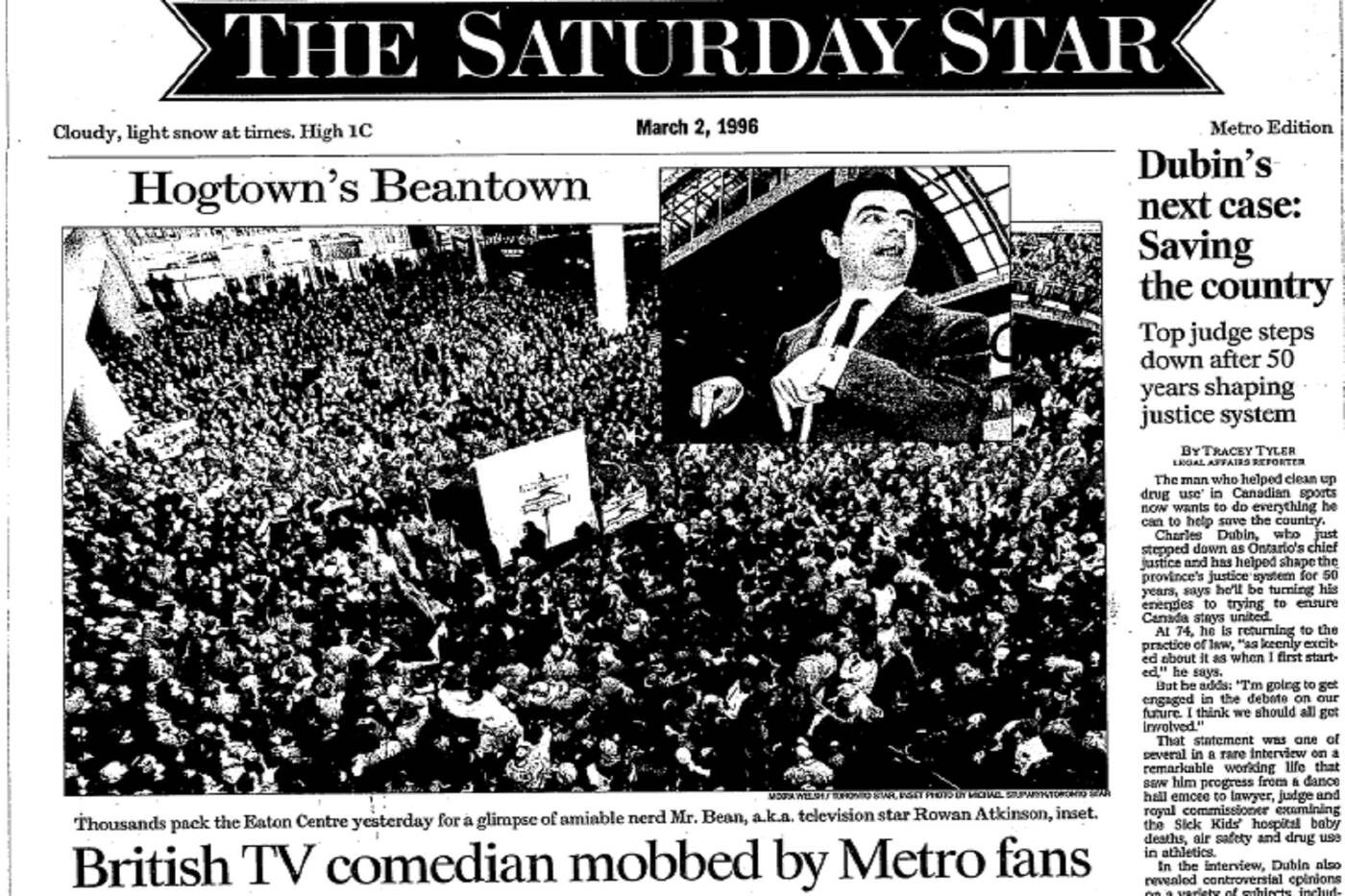 Bean machine: the Mr. Bean mob made news around the world and obviously in Toronto. Photo from the Toronto Star Photograph Archive, Courtesy of Toronto Public Library.

Last year, during one of the last "normal" local news stories before the world shifted on its axis, it was reported that several hundred teens at the Eaton Centre sparked a near riot while awaiting several Canadian TikTok stars.

For anyone who remembers the events that took place at the Eaton Centre on March 1, 1996, this TokTok "riot" was small fry compared to the great Mr. Bean mob.

Such was the gargantuan star power and universal popularity in Toronto of the bumbling Mr. Bean.