The top 10 YTV PJs of all time

They were there for you when it mattered most: after school, on Saturday mornings, and for a while even during lunch time. Canadian children of the '90s and '00s will probably never forget the magical, pre-internet times they shared with those irreverent yet inspirational televisual guides, the PJs.

Long before YTV was the elder statesman in a buttoned-up "Corus Kid and Family Vertical" at their state-of-the-art Queens Quay digs, it was a scrappy independent new kid born into late '80s era Liberty village (co-incidentally, within the exact same building which now houses the silver fox powered Zoomer Empire).

After a promising John Candy fronted debut in the fall of 1988, YTV experienced a turbulent and awkward childhood of its own, splashing out with repeats of Bonanza, Count Duckula, Australian soap operas like Home & Away, and in-house music video shows like YTV Rocks and the prophetically punky Rec Room.

In 1991, the network hit puberty and it all coalesced: September saw the debut of the Program Jockeys, or PJs, modelled upon the mega successful VJ rotation at MuchMusic. PJs first appeared on The Afterschool Zone (later shortened to just 'The Zone'), a block of eclectic programs like Mighty Morphin Power Rangers, Biker Mice from Mars and vintage Adam West Batman, and the rest is history.

The YTV of 2015 even still has four or so of them on payroll (take that, Much). In fact, Carlos Bustamante now holds the impressive title as longest serving PJ, with over a decade under his janitor's belt.

Mileage may vary, but here are my picks for the top 10 YTV PJs of all time.

PJ Katie
Delightfully bonkers Katie was a true YTV superstar. Her epic on-air role playing with miniature plastic toys led to the creation of PJ Katie's Farm, an actual series that epitomized the random, anything goes ethos of YTV back in the 90s. Apparently there is a bar in Nova Scotia which still runs the episodes on a VHS loop for intoxicated college students.

Gord the PJ Man
Technically the very first PJ to appear on YTV's brand spanking new Afterschool Zone on Labour Day in 1991. In the following clip, Gord Woolvert's bizarre shtick and ultra-90's attire provides a tiny glimpse into what watching YTV was like back in the day - it often felt as if simply anything could happen.

PJ Jenn
Jennifer Beech, daughter of popular children's entertainer Sandra Beech, was part of the original Zone line-up and always managed to hold her own with the more anarchic PJ Phil and the other boys. Whether singing, playing guitar, or warning of stranger danger, Jenn was like the ultimate babysitter you wished you had in real life.

Snit
Joining The Zone in 1994, Snit was a sentient computer monitor gone berserk, brought to life by a combination of saliva and gum. Voiced and operated by the insanely talented Atul N. Rao, Snit grew increasingly demented for the duration of the decade until he was blasted off into space in a memorably moving final segment. Viewers were so incensed and fan-mail so overwhelming, Snit was finally given his own spin-off show on YTV entitled Snit Station.

PJ Aashna
Starting off as a yeoman host of YTV Hitlist and Saturday morning cartoon block titled The Alley, Aashna is probably best known as singing the national anthem which played every night on YTV when they went off-air (in fact, her rendition is still used in many schools across Canada).

Warren Chester Grog
The Grogs were bizarre puppets created by the spectacular duo of Jamie Shannon and Jason Hopley. For a while the popularity of the Grog family (Warren, Gidian, Chigonk, Rosencrantz, Jasper, Filth, Sorbet, and Iffer) eclipsed even the human hosts, but alas their time at YTV was short lived. It all culminated in a gonzo New Year's Day stunt in 1994 when Grog took control of the station and began broadcasting his favourite programs before being stopped by PJ Phil & Jenn.

PJ Paul
Pop culture boffin PJ Paul first appeared as host of The Breakfast Zone (later B-Zone), where his loquacious nature was an instant success and his natural on-air bond with PJ Phil resulted in TV gold like the legendary Halloween Dark Night specials. He now goes by the more mature handle Paul McGuire on the Corus owned CMT, where it's doubtful you'll ever see something like this pitch perfect re-enacting of Star Wars.

PJ "Jazzy" Jan
Now better known as Janis Mackey Frayer, the sombre Asia bureau chief for the CTV National news, "Jazzy Jan" was the original PJ. Breaking out of YTV's late night Rec Room, "Jazzy Jan" took the early afternoon shift and empowered children across Canada to send in their drawings. No doubt a large number of current artists and designers owe her a debt of gratitude.

Sugar
Stephanie "Sugar Baybee" Beard had a voice like a cartoon character on helium, and a friendly but street savvy personality thanks to her Scarborough hip-hop roots. An instant idol when she premiered on The Zone, Sugar helped solidify YTV's rep back in their "Keep it Weird" salad days of the new millennium. Apparently YTV is still inundated with fan mail demanding she be re-instated.

PJ "Phresh" Phil
The undisputed King of PJs. Not only did his style embody YTV's central "As Young As You Are" tenet, at times his adventures were so unconventional and offbeat it seemed as if he was broadcasting from another universe. He encouraged a generation of Canadian kids to pick up a guitar and follow their dreams, while at the same time to respect others and enjoy life to its fullest. TV in general has been a poorer place since his departure from it many moons ago. 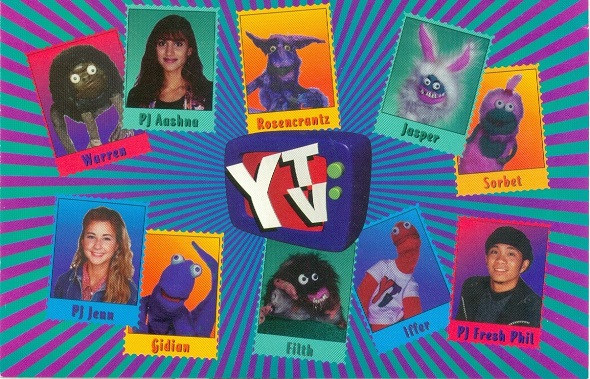 Who did I miss? Please add your suggestions for the best YTV PJs in the comments section.