As 2010 comes to a close, in addition to looking back on the year in Toronto film, I'll be busy playing with my new Blu-ray player and Netflix subscription. So will this sweet home entertainment system keep me from going out to see films? Nah. For all the doom and gloom written about the inevitable end of movie theatres, the biggest news for Toronto cineastes this year is that a whole lot more unique and independent screens have opened than closed.

Here are the top 10 Toronto film stories from 2010 in no particular order.

The TIFF Lightbox
The 2010 edition of the Toronto International Film Festival drew in tons of movie stars and international press, and screenings were chock-a-block as ever. But the festival's big news for those of us who actually live in Toronto was the unveiling of TIFF's year-round venue at King and John, the Lightbox. The new diggs are pretty swanky, with five public cinemas, a lounge, restaurants, reference library, gift shop, and a gallery space now hosting Tim Burton's popular MOMA exhibit. And what news is making me happiest of all this year? Playback recently reported that TIFF is planning a similar show of David Cronenberg's work.

Well hello there, Toronto Underground
The indiest of the local indies, The Toronto Underground joined the rep cinema scene in May and overnight became Toronto's premiere venue for fanboy events, cult-worthy flicks, and themed screening runs. Before this, the 700+ seat theatre (in the lower floors of a condo building at Spadina and Queen) had been pretty much dormant since the mid-1990s. Charlie Lawton, one of the guys running the place, tells me the most popular screenings this year have been Batman with Adam West doing a Q & A after the film, The Wright Stuff, and the Son of Kung Fu Fridays series co presented with TIFF's Colin Geddes. Oh, and coming up in the new year, movies-on-demand. 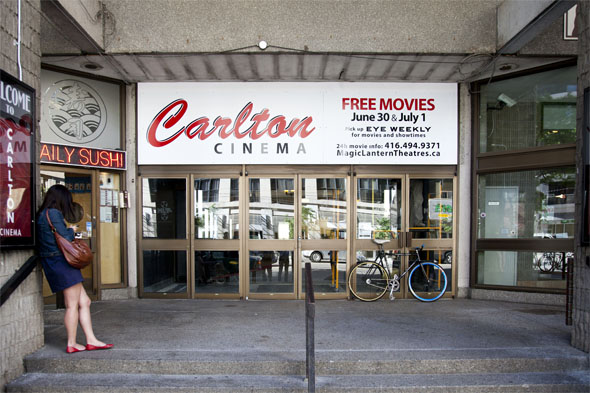 The Carlton returns
Last December, Cineplex Odeon pulled the plug on Toronto's Carlton Cinema. Obituaries galore were published. Maybe Magic Lantern Theatres read our status updates full of sentimental outcry? In February, the Edmonton based movie exhibition company (that also runs Rainbow Cinemas) announced its intention to refurbish and re-open the art-house-leaning theatre. And by the end of June, reels were running again at Yonge and Carlton.

Bruce LaBruce banned Australia
Bruce LaBruce struck a publicity goldmine when the softcore version of his latest film was banned by the Australian Film Classification Board in July. L.A. Zombie may have been nixed from the Melbourne International Film Festival lineup, but the phrase "gay zombie porn" was pretty good headline material and news sure got around fast and far (read The Guardian's report here). Later in the year, the Melbourne Underground Film Festival decided to screen the film to protest the ban, and so police raided the festival director's home. I sure would have liked to have seen LaBruce throw a hissyfit at all of this, but he did write up a pretty entertaining press release on the incident (read it here).

The Cumberland is NOT closing
With the opening of TIFF's shiny new Lightbox, us film buffs and blog commenters have been gossiping like a bunch of sorority girls in an 1980s flicks: Which cinema will go down first? It's hard to say, but I did look into rumours - coming from reputable sources - of the Cumberland's imminent closure. The official word from Cineplex Entertainment is that there are no plans to close the Yorkville cinema venue at this time. 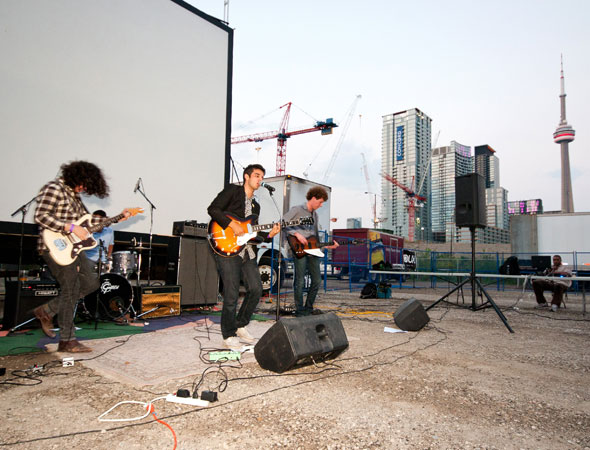 Open Roof Films
I'm just going to come out and say it: we kick New York's ass when it comes to film festivals. That's why I've got high hopes about Open Roof Films, the Toronto version of a popular Brooklyn-based outdoor series, Rooftop Films. Open Roof Films had a couple of test run screening as part of Hot Docs in April, and through the summer rolled out a lineup of independent films in the parking lot of the Amsterdam Brewery.

The Humber Cinema is reopening soon
Word on the street is that the Humber Cinema at 2442 Bloor St. West, just west of Jane is set to re-open. Hopefully, I'll have more on this soon.

www.torontofilmfestivals.com
The City of Toronto created this handy reference website in collaboration with over 70 local film festivals and the George Brown College School of Design... and my job just got a little bit easier. 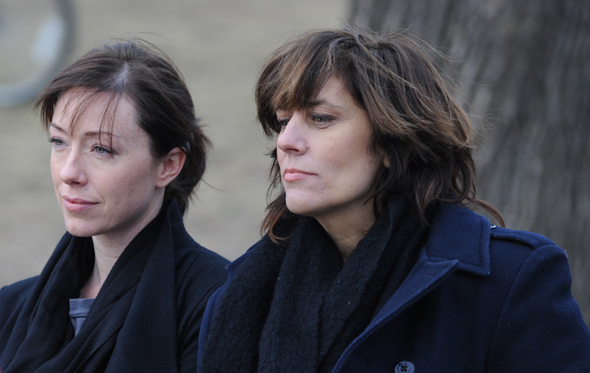 Tracy Wright
It wasn't until she passed away in June that many, myself included, re-discovered and fully appreciated Tracy Wright's career as a performer in Toronto. This year alone, Wright was superb in Daniel Cockburn's You Are Here, and Bruce McDonald's This Movie is Broken and Trigger, the later written by film and theatre heavyweight Daniel MacIvor after she was diagnosed with pancreatic cancer, to give her a starring role.

The Cineforum is dead?
In the springtime, Reg Hartt got a notice of violation from the City's Licensing and Standards division for running a theatre out of his house on Bathurst, just south of College. It's been an ongoing story for as long as I can remember. Tenacious as ever, as I write this, Mister Hartt is actively blogging about film and screening movies.

Photo of Tracy Wright (with Molly Parker, left) from Trigger courtesy of eOne. Other photos blogTO.