Hot Docs is in full swing, and attracting steady line-ups around the block at the Bloor Cinema. The documentary festival got off to a stormy start on Thursday night with heavy rains and Jennifer Baichwal's Act of God, a film that looks at the effects of being struck by lightning.

While we've already previewed many films to watch in this year's lineup (see preview part 1, part 2, and part 3), this weekend at Hot Docs I discovered a few more gems, a handy festival iPhone app, and free or cheap seats.

Pockets, the 3-minute film that asks "What's in your pocket?" was another highlight. It premiered last night along with director Gary Hustwit's less impressive follow up to Helvetica, Objectified (Mon, May 4, 9:15 pm), which looks at everyday products and the people who design them. Hair India (Tue, May 5, 7:00 pm) also failed to grab my interest, in spite of being filmed in India and exposing the hair export industry. 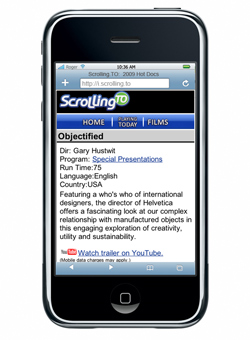 Thanks to Scrolling.TO, festivalgoers now have a free iPhone app to help with the daunting task of sorting out schedules and deciding what to see at Hot Docs, another indication of the festival's growing popularity. DocScroller lists movies and showtimes, including links to trailers, maps to venues, and ticket purchase integration. It works on an iPhone or iPod Touch (http://i.Scrolling.TO) and on a mobile phone or BlackBerry (http://m.Scrolling.TO).

To avoid having to carry the bulky festival guide, I downloaded the less sophisticated iPod classic version, which has the film listings and descriptions without all of the convenient web functions.

My final note on the week ahead is for bargain-hunting doc lovers. Unless you are a student (or a senior) who can get into daytime movies for free, late night screening are the best value with $5 admissions after 11pm. There is also a $10 All-You-Can-Eat Late Night Pass, still a deal with 6 midnight docs to go before the end of the festival. The screenings are sure to be provocative with films like Graphic Sexual Horror, Colours of Blood/Aka Ana, The Wild Hearts, and the high-profile The Yes Men Fix the World rounding off the lineup.

Hot Docs runs from April 30 to May 10 at various venues. Tickets and passes can be purchased at the documentary box office, 55 Avenue Road, Hazelton Lanes (Lower Level) or online.

Still image from Objectified (above) and DocScroller app for iPhone.