It's been a few days since the Toronto International Film Festival packed up and already the city has returned, somewhat, to normalcy. The red carpets have been rolled up, the stars have left town, the schedule guides which littered the streets around Bay & Bloor, Yonge & Dundas and by Roy Thomson Hall have disappeared, and all we have left is our memories, and maybe a complaint or two. While we've reviewed many of the films at TIFF this year, why not review the major complaints and changes at this year's festival?

This year, many TIFF goers were upset to hear that donors to TIFFG and the Bell Lightbox Fund got first crack at tickets. While it was believed to be a new scheme by 'money-hungry' festival executives, this practice has been occurring for quite some time. TIFFG is not unlike any other arts organization in the city, where donors are given first crack at tickets. This is the same at the Canadian Opera Company, the TSO, Massey and Roy Thomson Hall, and the National Ballet, just to name a few. With massive cuts to arts funding potentially coming up, instead of sneering at donors as 'queue-jumpers' we should really be appreciating the fact that they truly support the arts that we enjoy, and leave it at that.

One of the major things I must mention would be the fact that unlike other festival-goers, I'm happy with the upgrading of the Elgin Theatre to a full-time premium theatre, like Roy Thomson Hall. Now before you run me into the ground, remember why people go to Roy Thomson Hall; for the glitz and the stars. But honestly, RTH is all fine and good, but if you want opulence, what's better than seeing these people than at the gorgeous Elgin theatre? In terms of getting the bang for your buck, it's a crapshoot either way. I saw one film at each theater this year, and while both screenings had the director in the audience, at RTH they waved at the audience and departed but at the Elgin the questions went so long I had to duck out to my next film! So take out your anger at the talent who don't want to bother taking questions, rather than the theatre.

Of course, here come the complaints about how it's not worth $40 to see films that are going to be out in a few weeks, and you know what? I fully agree! If you're going to the Toronto International Film Festival only to see films that already have wide-release dates, such as Burn After Reading, The Duchess, Blindness or Appaloosa, then you're doing it wrong. The real gems for Gala screenings are the films you probably won't be able to see ever again, except on a bootleg or foreign DVD, films like The Good, The Bad, The Weird or La Fille de Monaco. So if your complaint revolves around the matter of seeing The Duchess now, or a week later, take it elsewhere!

Amongst the changes that most people did agree on, however, one of which was the introduction of the Festival Lite and Daytime Lite packages. While people usually gape at the size of the full Festival Package, these mini-packages were deemed 'just right', with the Daytime Lite package in particular selling out way before the festival began. While I never thought it possible to work and use a Festival Pack of 50 films, the Festival Lite package may be just the ticket... 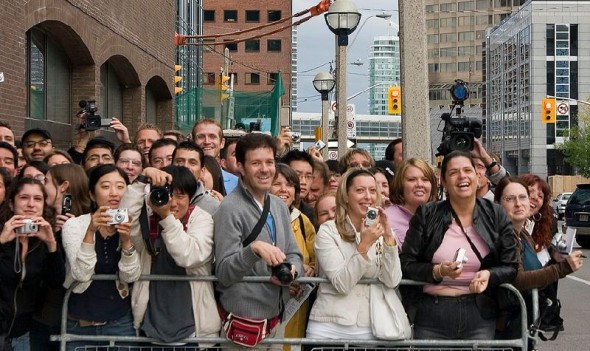 Highlights from blogTO writers include:

The standing ovation for Chocolate was a very proud moment for director Prachya Pinkaew, especially since his previous film at TIFF, Ong-Bak in 2003, was met with the same adoration. This warm response was probably the most emotional finish to TIFF that I've ever witnessed. Viva la Midnight Madness!
Danielle D'Ornellas

I'm not sure if it was a favourite momemt, but I found it interesting how the media and TIFF-goers relentlessly criticized festival organizers for some of their fan-unfriendly changes this year. This was perhaps epitomized in my final screening of the festival - Spike's Lee's Miracle at St. Anna - where during the intro before the film, someone from the audience at the Ryerson screamed "Thanks for Not Screening This at the Elgin". Another member of the audience then yelled "The Elgin Sucks". The TIFF representative on stage acknowledged and seemed to understand the feedback and the whole exchange was rather appreciated by the near-capacity crowd
Tim Shore

I wonder if Patrick Watson's career will take off like Feist's did after her song was played before EVERY screening.
Gary

I'm a TIFF virgin no more! My friends and I got invited to this year's opening gala which screened Passchendaele at the Roy Thomson Hall. At first I was just stoked to get all dolled up and walk (past) the red carpet, but sitting in the theatre knowing that the people I will be watching on screen are actually sitting a few rows away from me was surreal... Oh, and we also attended the afterparty at the Liberty Grand - complete with real tanks which carried some VIPs. That was surreal.
Jade Maravillas

While I may still be brewing all those free bags of ground Starbucks I got in all those lines I waited in, and finding movie stubs in my pockets, the festival is over. See you next year!