If you missed the zombie walk on Saturday, it better have been for a good reason. Like to watch Audience of One, an astonishing documentary that charts one man's grandiose obsession with bringing Jesus to the masses by creating a multimillion dollar Christian version of Star Wars. Kinda like Jesus Camp, but with more ambition.

When this film lets out at The Bloor Cinema, hordes of zombies are waiting to get in. The week-long Toronto After Dark Film Festival is the new horror and fantasy cinema lovers' fantasy.

Zombies by the dozens roam about Bloor Street, fresh from their zombie walk. Most of them choose to take in the Canadian premiere of Automaton Transfusion, a bloody disgusting zombie film set in the American suburbs. A funny short starts off the evening's programming: Zombie Jesus, a cleverly written and wonderfully acted modern twist on the resurrection of Christ, directed by Steve Miller.

The creators of Zombie Jesus (from left: producer Jason Wagar, writer/director Steve Miller and actors Erez Bowers and Matthew Carvery) goof around after their screening.

In between the evening's double-bill, I catch up with an old zombie pal of mine at The Beer Station across the street. Outside a cute, redheaded zombie was held at gunpoint as the locals walked by in amusement.

Those who stick around for the late show are in for a real treat. Poultrygeist: Night of the Chicken Dead has the audience alternating between uproarious laughter and gross-out groans. If you're not already a vegetarian, you'll likely have a lifelong aversion to processed chicken meat after watching this one. Director Lloyd Kaufman (pictured above with green-headed monster) is on hand afterwards to fend off the zombies' in the packed audience. 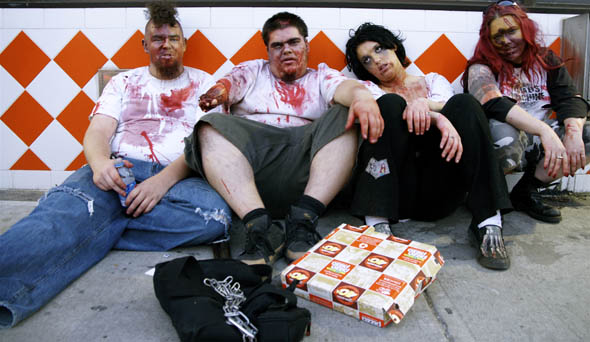 In between films, I catch up with some of Toronto's finest zombies. ONEARMEDBOB and his posse grab some brain food by the Pizza Pizza. 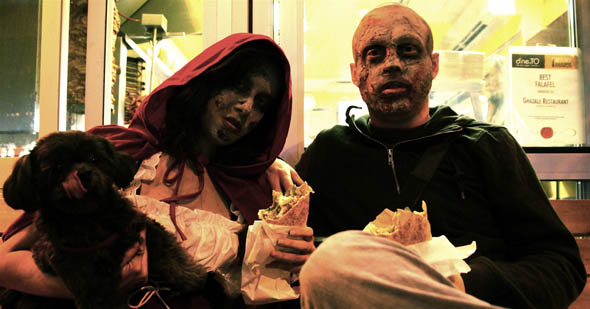 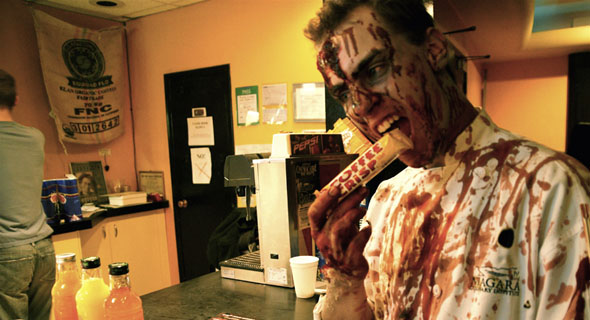 Back at the concession stand I meet George Andonian, 22, who made the treck to Toronto from St. Catherines for the day.

Andonian says they had a zombie walk there in July, but maybe 100 people showed up. Police estimate 1000 zombies turned up for our zombie walk. Andonian, today sporting a blood-spattered Niagara Culinary Institute shirt, works at Zee's in Niagara-on-the-Lake, but prefers Coffee Crisp to brains.

This wonderfully programmed festival has a little something for everyone. Last night's psychological thriller from Thailand, Alone kept me up most of the night. 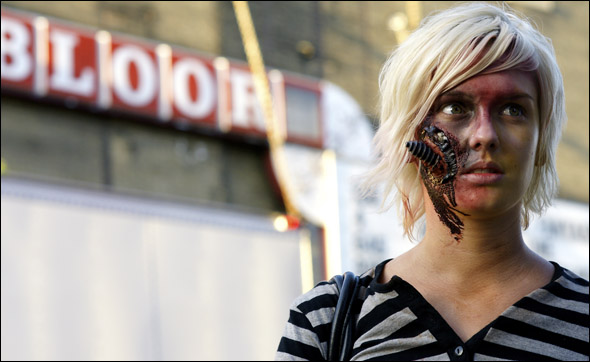 Haven't had your fill of the gorefest yet? Be sure to check out tonight's screamer, the Canadian premiere of Simon Says, starring Crispin Glover as a pair of psychotic twins. And the closing gala, Murder Party. If you don't have a costume for Hallowe'en planned yet, this should give you some inspiration.

All films show at The Bloor Cinema (506 Bloor Street West, just east of Bathurst Street). Remaining tickets are available at the box office from one hour before screening.