On the Red Carpet with Jodie Foster at TIFF

That which we call TIFF began with a bang earlier tonight with the opening gala screening of Fugitive Pieces at Roy Thomson Hall, and the screening of The Brave One at the Ryerson Theatre, starring Jodie Foster.

To say it was slightly chaotic in the media area as Foster made her way across the red carpet would be a bit of an understatement. How these celebs maintain their composure is beyond me as dozens of aggressive photographers (present company not included, promise!), and rabid fans scream and shout for their attention.

The evening began relatively calmly though over at Roy Thomson Hall with the gala premiere of Fugitive Pieces. The usual gaggle of politicians were at the event, which was hosted by Astral Media (of Toronto street furniture fame/infamy), as well as some local celebs and personalities.

Among them was John Tory's better half, Christine Elliott, Billie of "Mad Dog and Bille" fame, How Not to Decorate's Colin McAllister and Justin Ryan, actress Ellen Dubin, and of course the cast, including former Bond Girl (Die Another Day), Rosamund Pike. 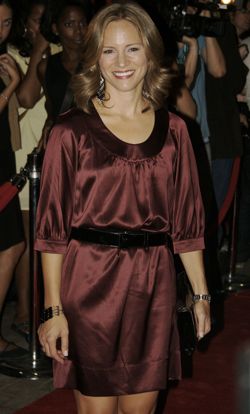 Not to mention 24's Dmitri Gredenko himself, Rade Serbedzija (who, despite having 40 years of acting experience, will always be Gredenko to me), Ayelet Zurer (who had a role in Munich), and child actor Robbie Kay, whose first role was in Hannibal Rising (how's that for a traumatic childhood?)

Later on, as I headed over for the screening of The Brave One, you could tell an A-list celeb was on the way as the number of TV cameras, photographers, and fans easily doubled or tripled. Producer of the film, Susan Downey, whose past work includes Gothika, House of Wax, Kiss Kiss Bang Bang, and most recently, The Invasion, looked spectacular on her way in, shown at right.

Jodie Foster looked full on stunned by the deafening shouts the crowd gave as soon as she made a step down the red carpet. Screams of "Jodie, over here!" and "This way!" were constant as hungry photographers descended on their prey (and practically trampled this humble blogger). To my right, a clearly enthusiastic fan of hers hanging over the metal barrier next to me proclaimed, 'I'm Italian! I can be as obnoxious and loud as possible to get her attention!'

Foster's co-star Terrence Howard seemed equally overwhelmed by the incredible commotion on the red carpet, shrugging hopelessly at the crowd as photographers screamed at him right and left, and subsequently cursed at agents and publicists who accidentally blocked their shots.

As the red carpet cleared, and the madness slowly faded away, many breathed sighs of relief, as media continued to curse the PR folks and grinning opportunists gleefully slipped their signed autographs into plastic bags, sure to end up on eBay within the hour. Welcome to TIFF, day one! 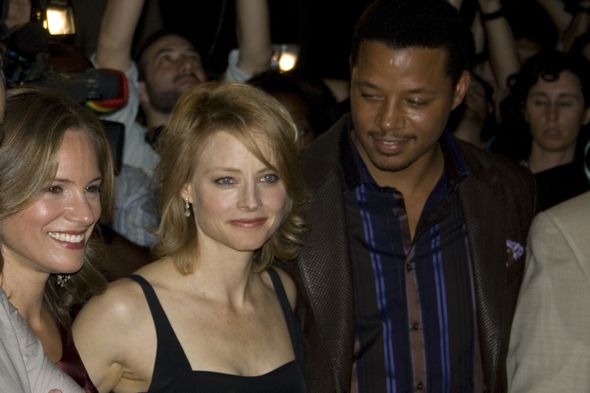 Producer Susan Downey, Jodie Foster, and Terrence Howard on the red carpet for the TIFF premiere of The Brave One

Keep an eye on our coverage of TIFF 2007 on blogTO all weekend long, which will surely see even more red carpet madness.

All photographs by Adam Schwabe