I knew that with the arrival of this year's Junctions Arts Festival (with its art-meets-performance-meets-food-meets-street persona) that fashionable people would be out in droves. Who doesn't love barbecued corn? Art and fashion, like music and fashion, will always be intrinsically linked. 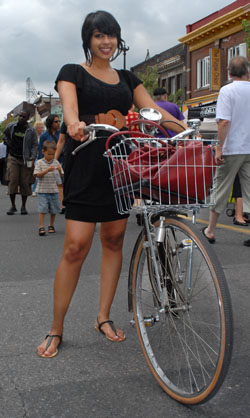 How would you describe your style?
I'm generally a cheap person so I guess it's got to be comfortable but still got to look good. I have to feel good, because when I feel uncomfortable I don't feel good. I have to be able to throw it on and it has to be versatile. Versatility is important to me. I also do a little bit of fashion design on the side so I make my own clothes too.

What kind of clothing do you design?
Stuff that I would enjoy wearing and that my friends would enjoy wearing. A new thing that I really like doing, and it's not really new per se, is finding an old t-shirt and reworking it somehow so it's a halter top or a tube top, or it's got a weird shoulder or neckline because I really like showing the neckline. I think one of the most beautiful spots on a woman is the collar bone so I like to emphasize that. I'm trying to design stuff that caters to what the most beautiful areas are of a woman and how to accentuate it.

What are you currently wearing?
I'm wearing a dress from Winners which was $14.99! The belt is from Korea when I went a couple of months ago. The bike I got from a flee market. It was $20 and her name's Brown Betty. She was all rusted so I got an S.O.S pad and a couple of friends and they helped me clean her up. It was an amazing find. And the seat is real leather and it has the springs in the back. I guess she would be my fashion accessory!

What was your style like when you were 15?
Flannel shirts, ripped jeans and Doc Martens. I had the basic black, eight holes and then I also scored a pair that were a burgundy and they looked all worn out. I wore them until there were holes in the heels and there were stones lodged inside. Every time I walked I could hear the pebbles moving around but they were the most comfortable things in the world.

Does that style carry any influence to the way you dress now?
I think I've matured in the way I dress but I've always been into fashion and followed fashion but I might not have necessarily worn the same styles that are in the mainstream. I've always been a fan of the if it's comfortable, then I'll wear it Mantra. I'm not sure if it had any influence, but maybe my obsession with button-down shirts is related.

When a new trend comes out, is it something that you pick up automatically?
I think it's important to work into your own style. Like skinny jeans, I'm a short girl so skinny jeans don't always work. Finding a way for it to work for you by matching a belt with it or a shirt or the right pair of shoes can always change the look of it. I still do follow trends but I like to make it work for me because it doesn't always work for everybody. I think that's another thing I've grown into is making styles work for you so you're not a slave to the trends and look ridiculous. I think that's important because the way you dress is really an extension of who you are and your personality. It's the first thing that people see and you can tell a lot about a person by the way they're dressed.

Was there any influence behind your hair style?
Well actually, another thing I'm really influenced by is music. I want to do a research paper about how music influences style and style influences music. And how each genre of music has it's own style and it's carried over into mainstream. So for hair I kind of liked that 70's Farrah Fawcett kind of look. I was doing that for awhile and trying to grow my hair out but it was so damaged by hair dye and straightening irons so I just chopped it off. I'm a lazy person when it comes to hair so it's got to be easy. To take time to straighten it every day is a pain in the ass so if I can just wash it and let it air dry then that's cool.

Are there any local stores you shop at?
I like going to a lot of the stores in Kensington Market. I love dresses so it's a great spot for that. It's still affordable for me. As much as there's some awesome stores on Queen West, I can't afford it all the time. Living on my own and I don't have that much of an income but if you're creative enough you can make things work with your style and it doesn't have to be designer. Of course I always love window shopping at Holt Renfrew. That's kind of my secret I guess. I go into Holts, see what's going on there and then I go to Kensington or Value Village and see how I can create that similar look for less. 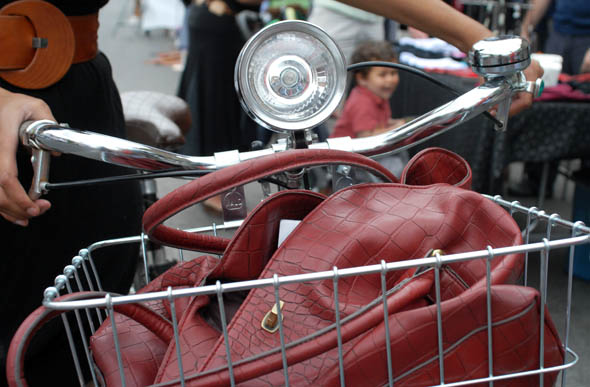