It's been a while since I've received customer service like this, especially at an eyewear store? Not since the days of "Wenches and Rogues" on College Street, ran by all those wonderful Newfoundlanders, have I run into such a swell bunch as the gang at Spectacle Eyewear . From the moment I stepped through the door, I was handed a bottle of H2O, and was told to "try anything on that you like." The open shelf concept is great; it's well lit, with lots of mirrors, and as laid back as their Sales staff.

It was a bright fresh day in July and I needed sunglasses, that's right, needed. At first I went for the big beautiful Brand Names, which were surprisingly affordable, but after being walked through some of the more specialty brands I found myself being opened up to whole new world of possibilities. Was I to go for the edgy, biker-style Chrome Hearts , the supremely engineered screwless-hinges of ic! berlin , or a throw back to the disco-funk of Cazal , which are literally circa 1970/80s, and sourced by Spectacle. 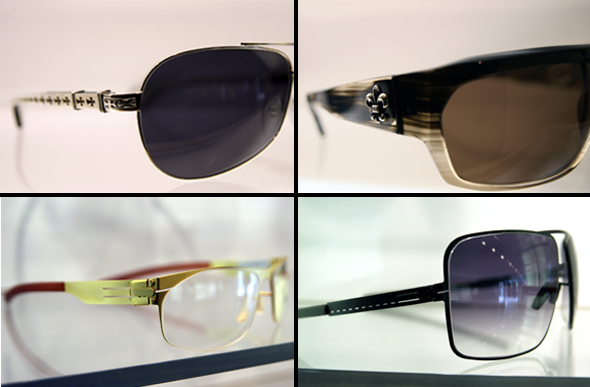 It's hard not to get caught-up in the design of sunglasses, once I was taught the importance of a well-made pair, I found myself wandering the store, even looking at regular seeing/reading eyeglasses. Suddenly I was an expert, I could appreciate the sophistication of a Paul Smith , the retro-look of Cutler and Gross , and the hand-made artistry of Alain Mikli .

I was overwhelmed by the selection, I started to get that video-store-feeling, where you don't know what you want to watch anymore, and your girlfriends saying, "Come on, would you just choose already!" I boiled it down to the two Oliver's; would it be Oliver Peoples' Mosley Tribes, or that 60's vibe from the originator of sunglasses Oliver Goldsmith ? I settled on a cool set of aviators from Mosley Tribes, which I ended up cracking a lens of within the first month, but because of warranty and service was replaced within a week, free of charge.

Spectacle has a third location opening soon (September 2007) in the Distillery District; Other services provided by Spectacle include, eye exams, state-of-the-art edging lab, product maintenance, and if you happen by the Queen Store location on a Sunday.... M-i-m-o-s-a-s...