John Allan's has arrived in Toronto and is the latest part of The Hudson's Bay Company's makeover under new CEO Bonnie Brooks. Much of the major surgery has been applied to the chain's flagship store, the venerable retail landmark still known, at least to a sizeable portion of the still-living population, as Simpson's Queen Street.

The Oliver/Bonacini team (Canoe, Jump, the Bell Lightbox eateries) has been given the task of revamping the store's restaurants and food services , and the women's fashion floors have been redone, with a splashy re-launch of The Room, once the linchpin of Simpson's luxury women's retail in an age when hats and gloves weren't affectations.

Named after its founder, the John Allan's chain has four locations in Manhattan and one in Chicago, and serves as a showcase for Allan's line of men's skin care and hair product.

It's a sleek space, all black, steel, leather and stone, with pop art on the walls and an espresso machine in the corner, and I arrive late for my appointment thanks to the usual daily subway mishap. 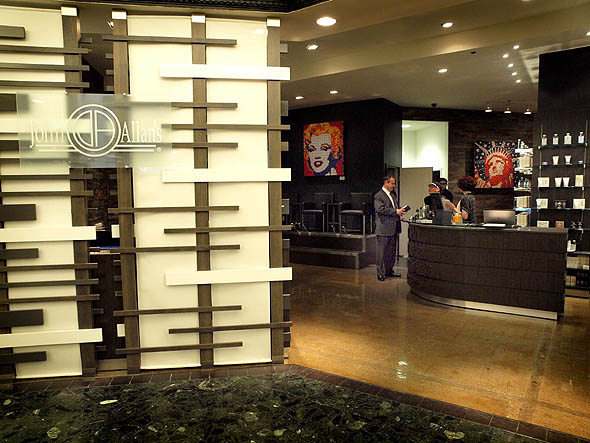 I'm introduced to Diane, the manager, who gives me a quick tour, and cautions me not to use words like "salon" or "spa" - they prefer to call it a club, and offer annual memberships to underline the point. I'm introduced to my valet, who takes my coat and hat and helps me into a short black robe before handing me off to have my hair washed. 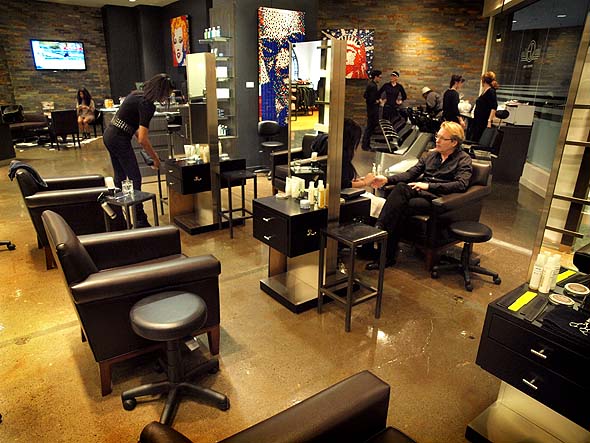 I have to give the staff credit for dealing with my awkwardness with anything more than perfunctory barbershop treatment - there's clearly some training involved in getting customers to loosen up once they've crossed the threshold, and it's clearly needed with a customer like me.

I submit whatever hair I have left to a thorough, relaxing wash with Thick, a lavender-scented John Allan's brand shampoo, and Mint, a conditioner that leaves a refreshing tingle on my scalp - it'd probably be a real treat on a sticky summer day.

I'm moved on to my haircut and manicure. After consulting with me on my preferred style - nothing fancy; at around this time last year I had my hair cut at a U.S. Army base in the Mojave Desert - the haircutter gets to work, making a point of using his scissors more than the clippers that most barbers favour for a simple job like my hair. He works quickly, taking an occasional break to let me sip the coffee that I've been brought by one of the staff. 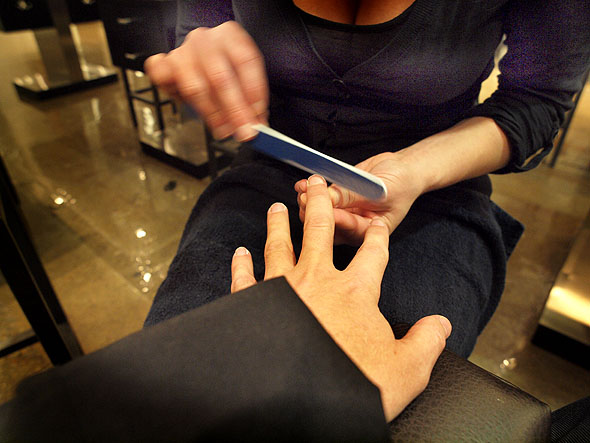 While he cuts, I'm given the first manicure of my life. Like most men, I don't pay much attention to my hands, but I've been told by too many women that hands - and shoes - are the two things they pay attention to on a man.

I'm assured by the manicurist that my hands are in decent shape - clipped nails, reasonable cuticles, no signs of biting. It occurs to me that I could probably count on one of those hands the number of times I've had occasion to use the word "cuticle" in my life.

It's all over faster than I expected, and my valet says that I'd have been moved on to the final part of the $65 Full Signature Treatment - a shoe shine - if I hadn't arrived wearing a pair of hiking boots to cope with the early spring snow storm we'd gotten that morning.

The only service John Allan's doesn't offer right now is a shave; Diane the manager tells me they're still looking for someone who can do the job, but adds that many locations don't offer shaves, and they don't see a huge demand for them in New York. Being a bit of a shave purist - I think they're the surest benchmark of the barber's trade - I think this is a bit of a shame, and I'm hoping Toronto customers share my expectations and make it worth their while to add it to their menu. 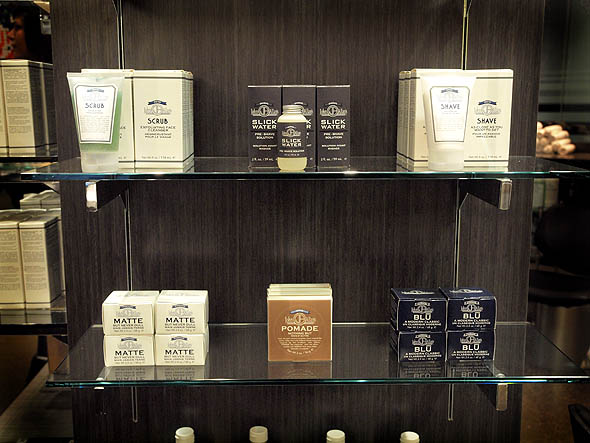 My hair cut is trim and neat, and my nails never looked better in my life, and it all seemed to get done in a flash. A place that called itself a spa would probably take a lot more of your time, so the briskness is likely a nod to the "time is money" Bay Street crowd they're hoping to attract.

Diane tells me that they're having a sale on the annual membership - just $620 for unlimited access to John Allan's services, which might seem like a lot, but if you're an exec who wants to look just so all the time, it's actually a fantastic bargain, especially once they deal with the liquor board hurdles and get beer taps behind the bar. In the meantime, the espresso was really very good.