Holt Renfrew Men is the brand-new, much-anticipated standalone menswear shop opened by Holt Renfrew. Located in the former Roots flagship on Bloor St., just half a block away from the original luxury department store , the 16,500-square-foot shop's design makes full, fabulous use of the wide-open, glass-walled interior.

Sprawling over two floors, the shop is now home to some of Holt's most refined menswear labels (though, who are we kidding, they're all refined). Those after edgier streetwear lines and casual pieces will still find what they seek back at the Holt's mothership; suits and shirts, fine outerwear, ties, cufflinks and shoes rule at this particular boys' club. 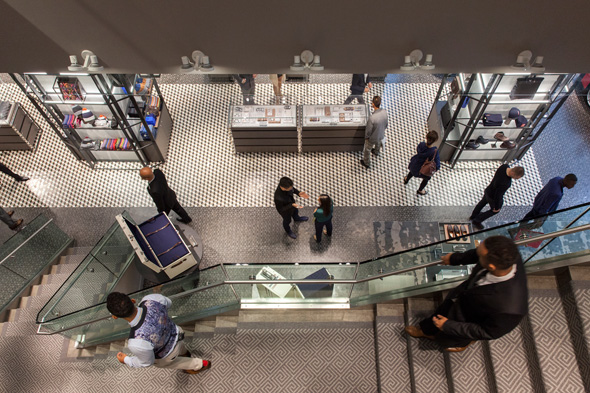 The interior matches the luxurious clothing perfectly; parquet flooring, geometric tile and patterned grey carpeting contrast with the ultra-modern lighting fixtures and glass. It's not intimidatingly gleaming, the way the original Holt's stores are - nor is it heavy or clubby-feeling. Nothing is matchy, but everything goes - I'm reminded of the way a mix of patterns in a pocket square, shirt and tie can create quiet sophistication in an outfit. 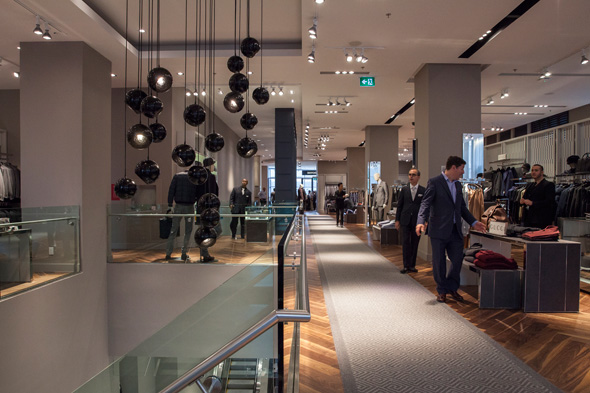 With the Shins and the Smiths playing over the store PA, the atmosphere affords gents a nice, leisurely, relaxing browse. (Thank goodness for that - there are plenty of reflective silk ties to marvel at and Gucci knitwear and Paul Smith cashmere coats to pet.) 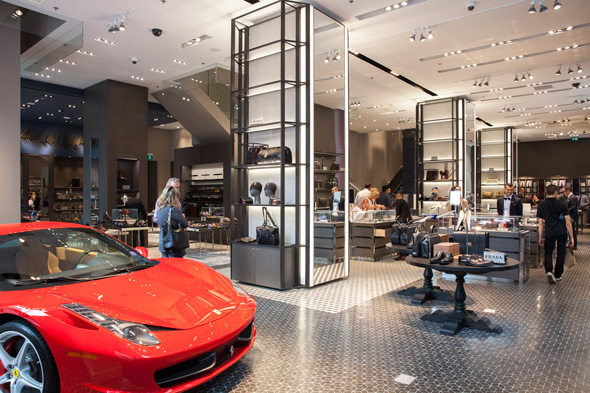 Of course, not everything here is subdued - there's a one-ton piece of flair greeting visitors in the form of a $355,000 Ferrari 458 Italia sportscar, which gets more than one passer-by's face pressed up against the glass from outside the media event. (The cars will reportedly be swapped in and out for an ever-changing selection of eye candy.) 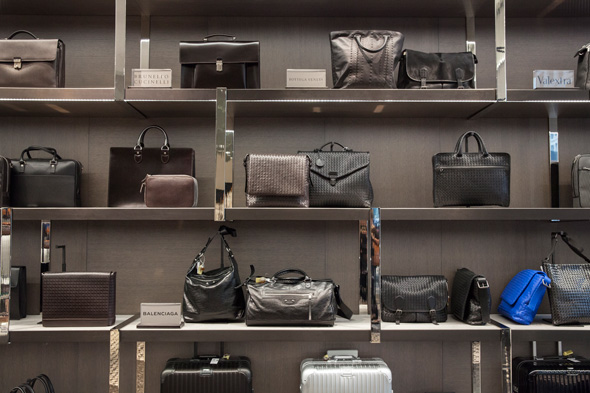 The first floor is home to accessories; cufflinks (from the sober to the whimsical), rows of ties and pocket squares, a rack of belts (just walking by, you can smell a glorious whiff of quality leather) and a selection of men's bags from a dozen designers, including Balenciaga, Saint Laurent and Valentino. 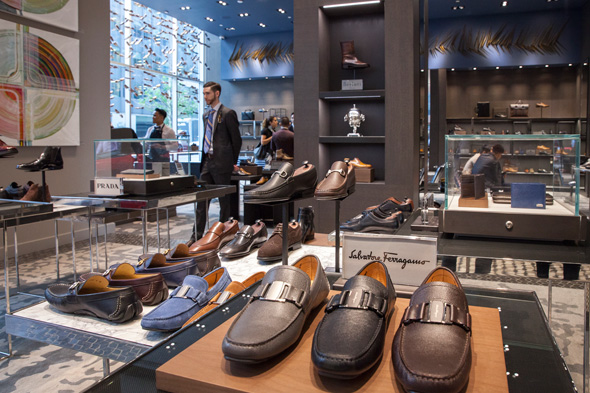 Occupying the western wing of the first floor: A sizeable shoe section, stocked with vegetable-tanned Berluti lace-ups (a brand exclusive to Canada at Holt's), Ferragamo loafers, and those glorious Lanvin cap-toe sneakers . As an attention-grabbing hint to pedestrians outside, an installation featuring a flock of shoe trees dangles in the window. At an adjacent station, complimentary shoe-shines are offered; a cobbler is also available on-site. 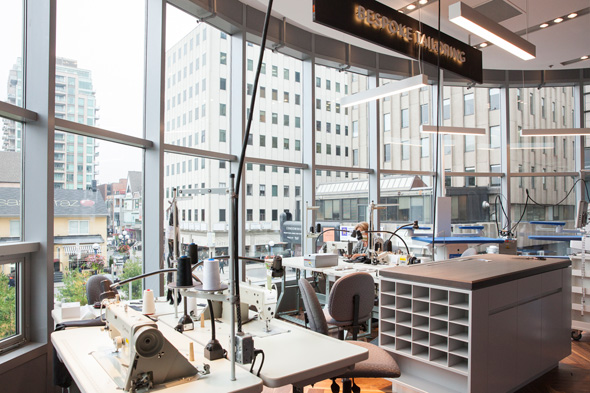 That's not the only service available for HR Men's well-heeled patrons. Take the escalator up to the second floor and you're greeted by the new home of Walter Beauchamp , the centenarian Toronto tailor, about to vacate their longtime space on Wellington for the little glass bubble floating above Cumberland St.

Their bespoke suiting services will now be offered out of the space, as well as tailoring (which occasionally means they're called upon to work on a vintage Beauchamp suit from decades ago - they're built to last). 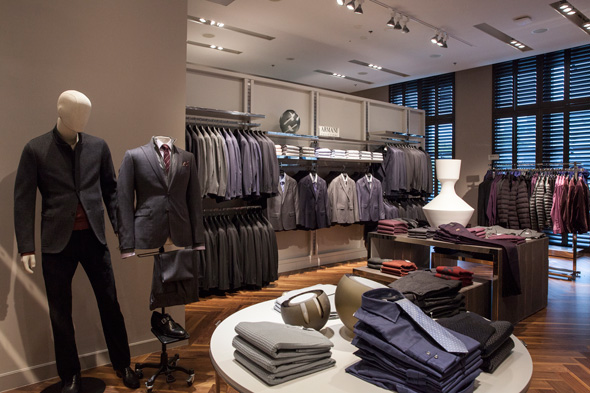 Made-to-measure is also offered at the store, but it's hard not to be drawn in by the second floor's array of designer suiting options. Armani, Gucci and Prada are among a dozen or so apparel designers on the top floor, all organized into mini-boutiques. Tailoring on that new suit is complimentary, and monogramming is available on-site. 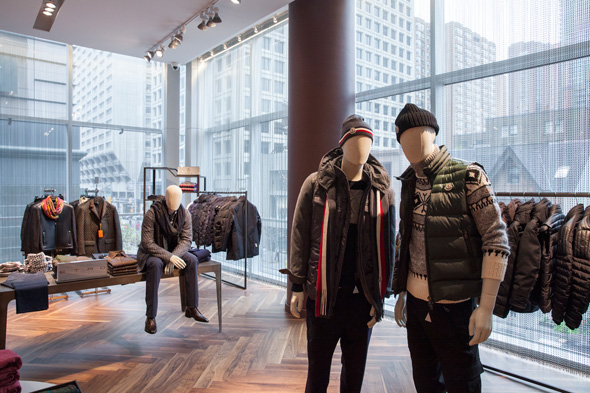 If you're looking for something for the weekend, the few casual options are no less luxurious: Buttery-soft Citizens of Humanity jeans (J Brand and Paige are also represented) and Belstaff motorcycle jackets. 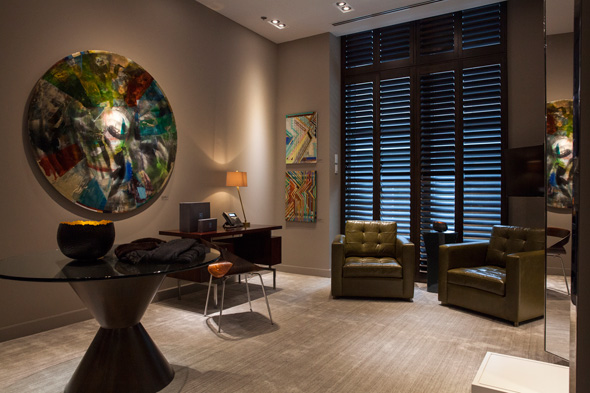 Personal shopping services are available on-site, carried out in a lounge kitted out with olive-leather furniture and pinstripe-upholstered walls - but it's hard not to imagine any man with good taste (and, probably, a black Amex card) making a loop through the store and instantly finding a dozen beautiful things he'd be thrilled to wear. 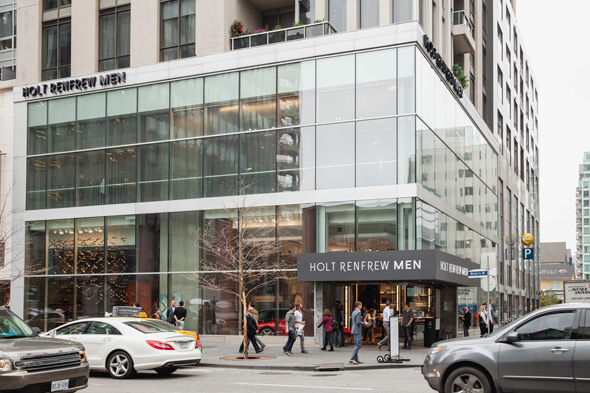