A one-man operation slinging pastrami sandwiches is one of the only food carts in Toronto not selling hot dogs.

It's called Switzer's, after the guy who runs it, Alexander Dalgliesh-Switzer. 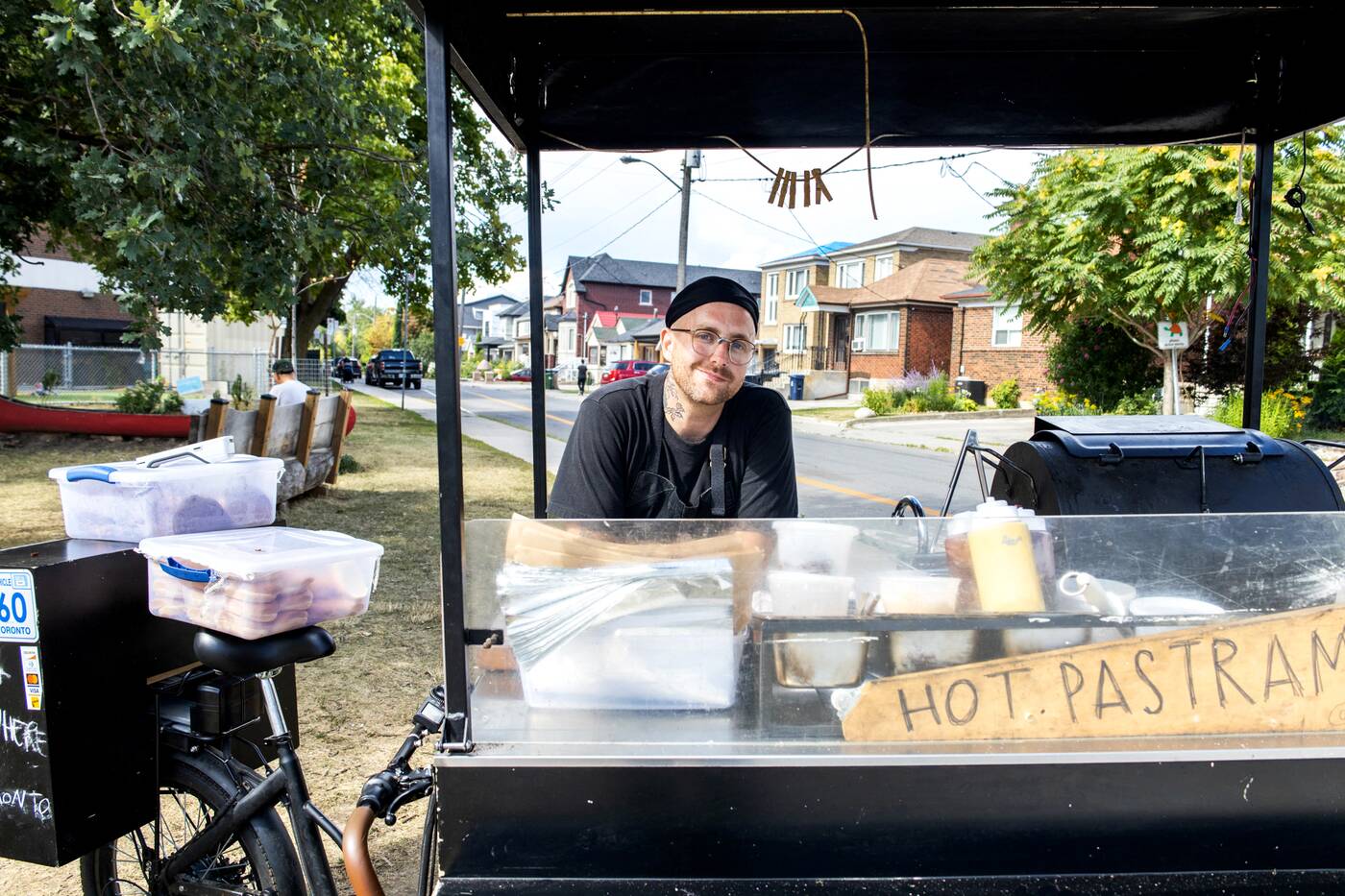 You have to follow him on social media to find out where and when his cart will be popping up next, though it's usually in the Vaughan and Winona or St. Clair and Oakwood area. 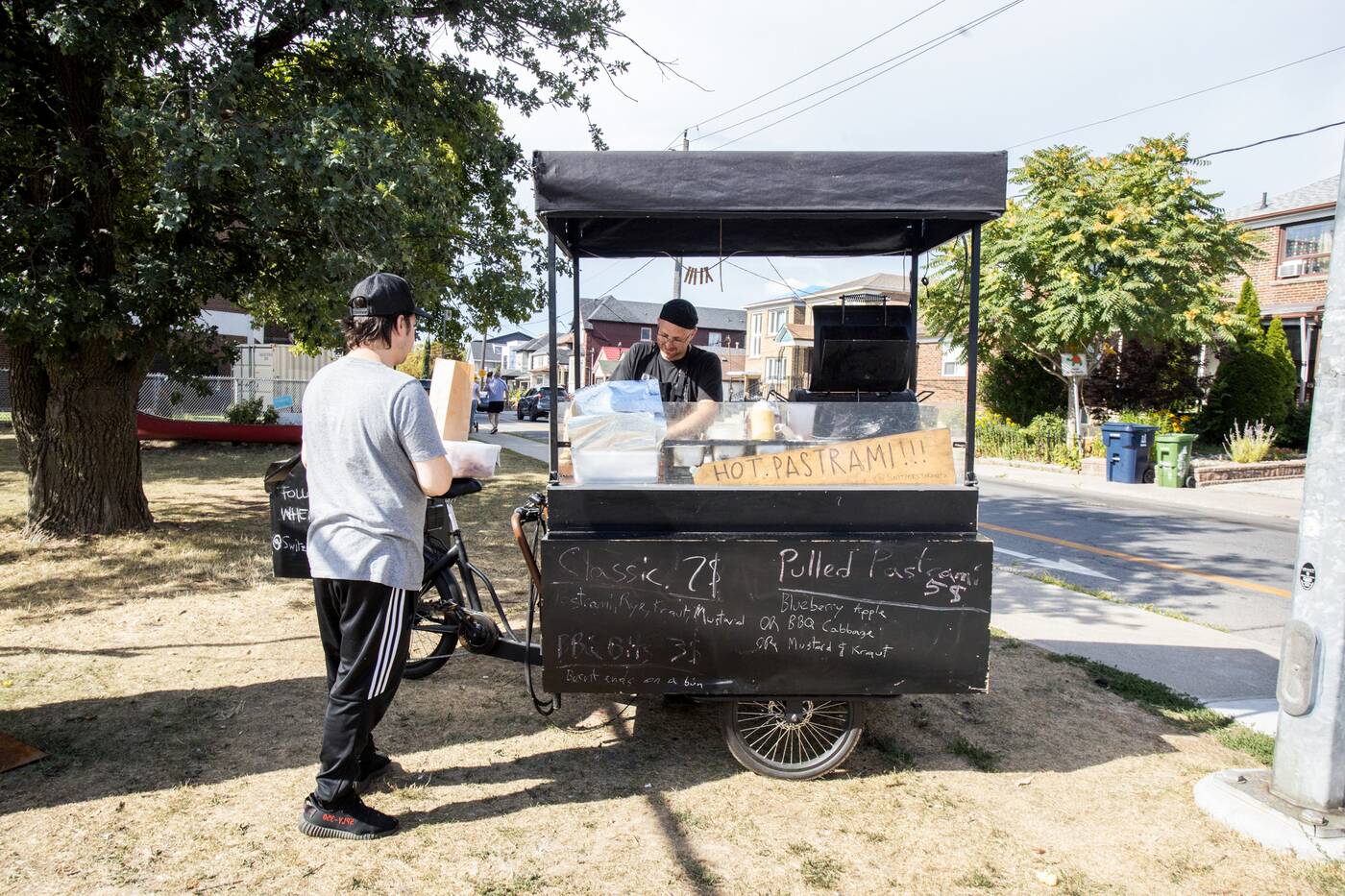 He started selling his sandwiches on the streets around May 2022. 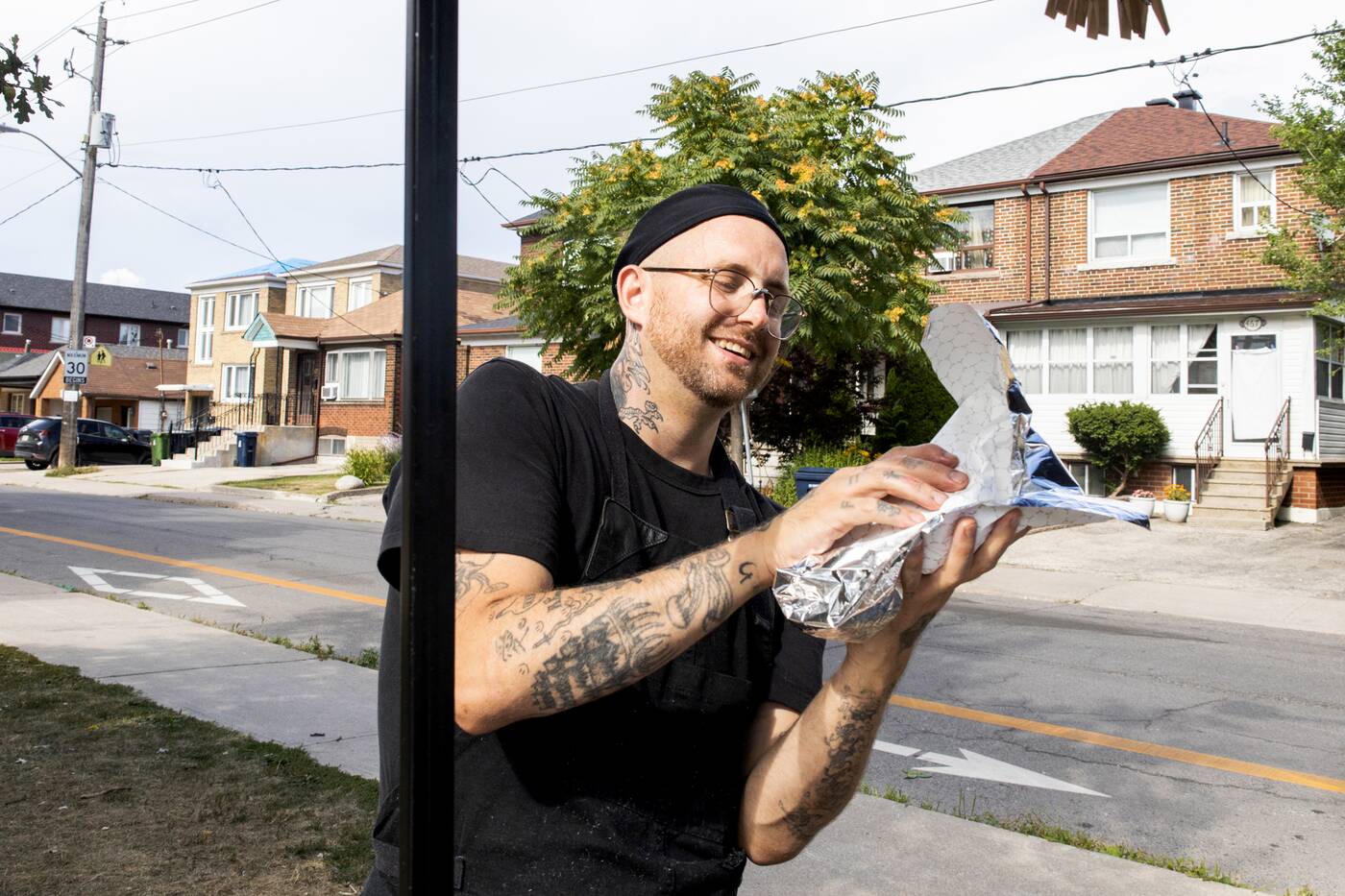 "I'm mostly motivated by not having a boss," Dalgliesh-Switzer tells blogTO. 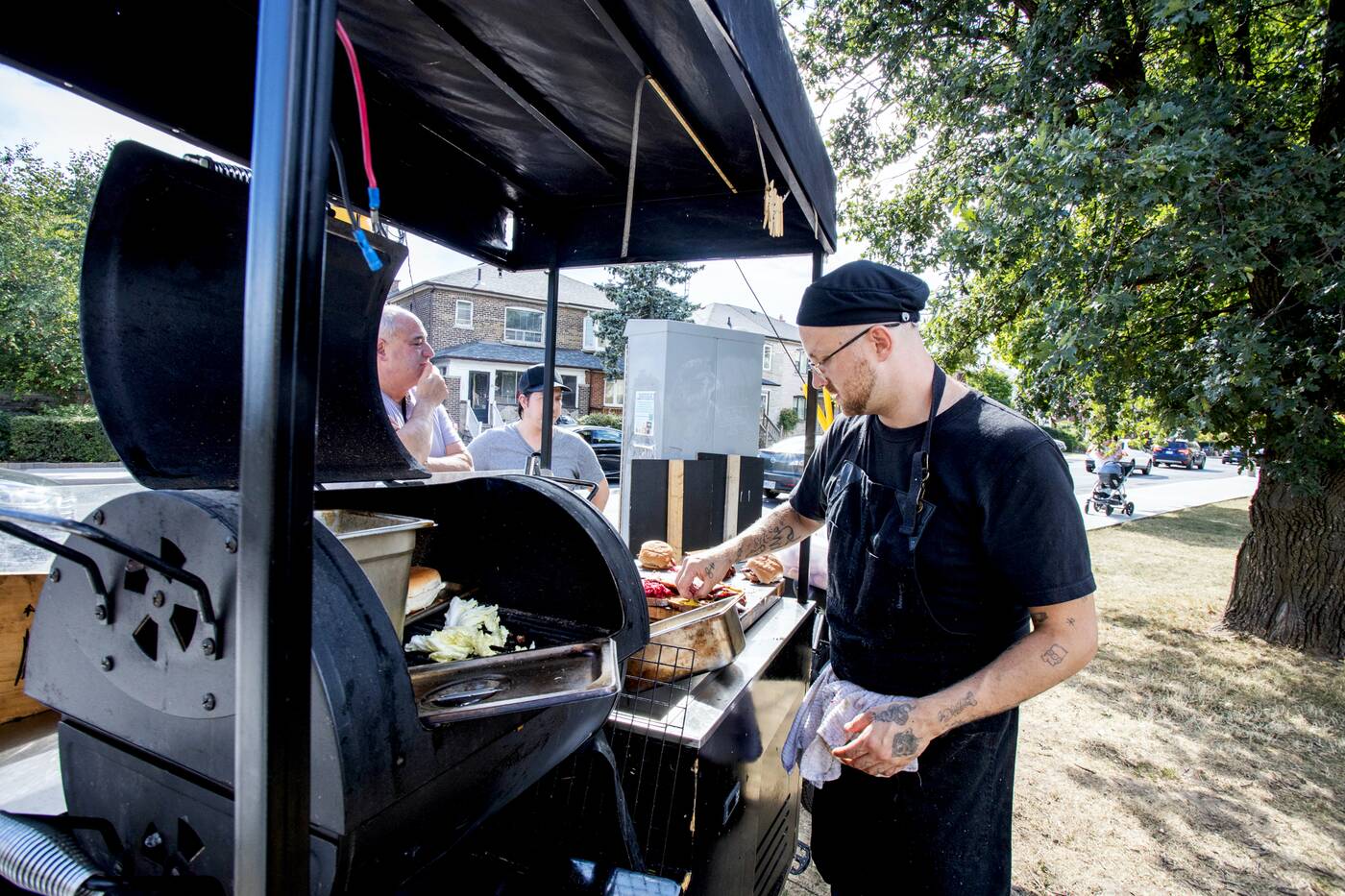 "As far as I know I'm the only person not selling hot dogs out of a cart. I think it was against the law up until 2016," says Dalgliesh-Switzer. "I was told that there are currently 50-something food carts operating with street vending licences but that there hasn't been a new one issued since before 2002 when the moratorium was put in place."

He's referring to a moratorium on new street vending permits for the downtown core. This came out of concerns about a concentration of street food vendors in the downtown core, and a desire to encourage vending in other parts of the city.

Switzer's received a non-motorized refreshment vehicle owner licence from the City on December 2021. This licence allows him to sell food on private properties with permission from the property owners and in compliance with applicable zoning bylaws. 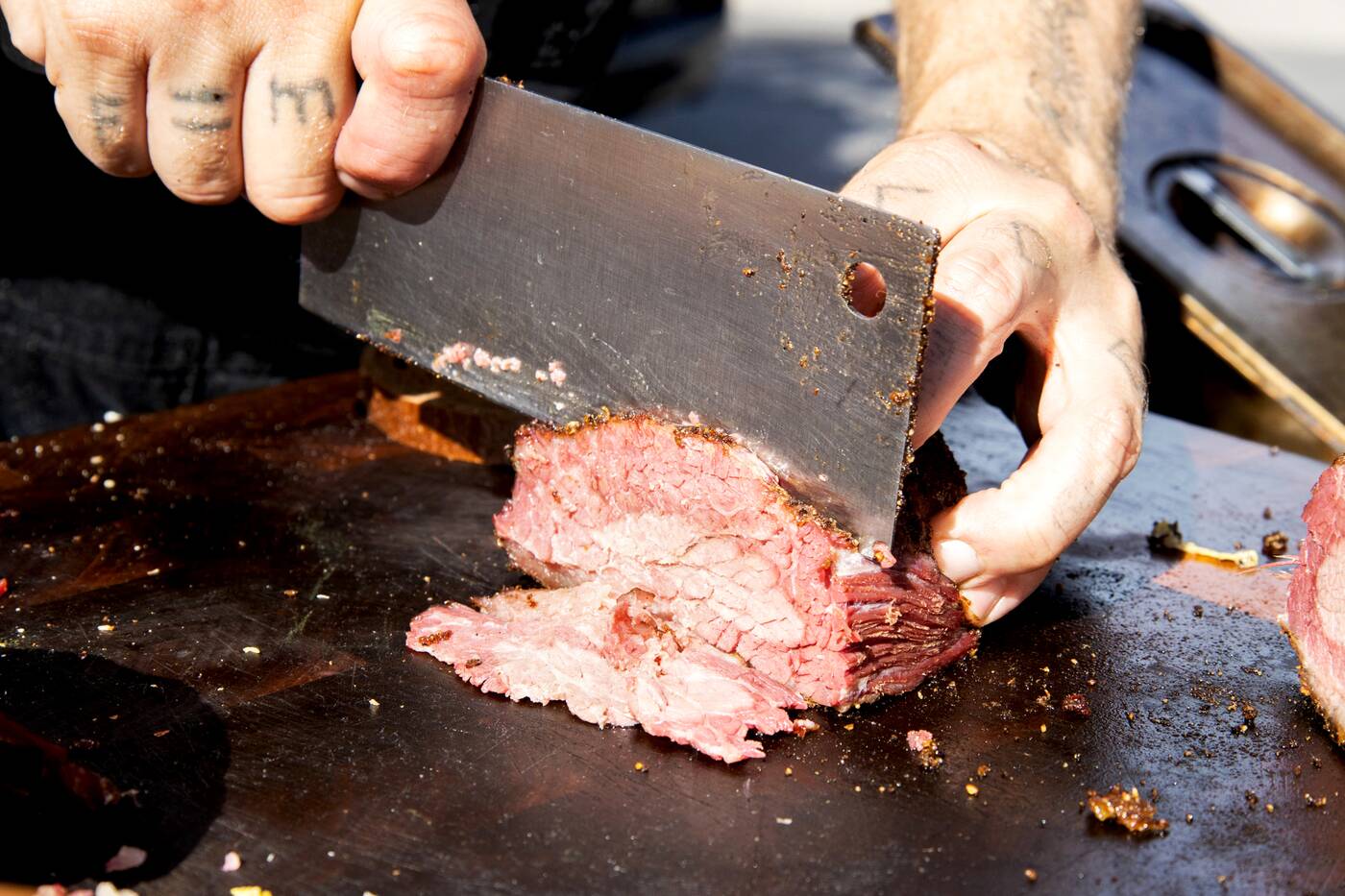 Technically there is also food cart Nobs', which does steak and burgers, and as of August 24, there are 139 licensed food carts across the city selling items like vegan food, churros and pastries.

"My permits just allow me to sell food out of the cart. I tried for years to get a street vending permit but after the failures interacting with the bureaucracy I ran out of options," Dalgliesh-Switzer tells blogTO.

"I can operate on private property with permission and there seems to be a lot of gray area in-between. There's lots of regulations about how far away from other restaurants I have to be and sidewalk clearances and stuff as well. I don't know that there are any time restraints."

The status of food carts and getting permits for them in Toronto can definitely be complicated.

"The process is complicated and filled with pitfalls," says Dalgliesh-Switzer. "No one at any of the multiple bureaucratic institutions has any idea of what the process is so they offer incomplete answers, often just outright ignore questions completely, or offer contradictory information." 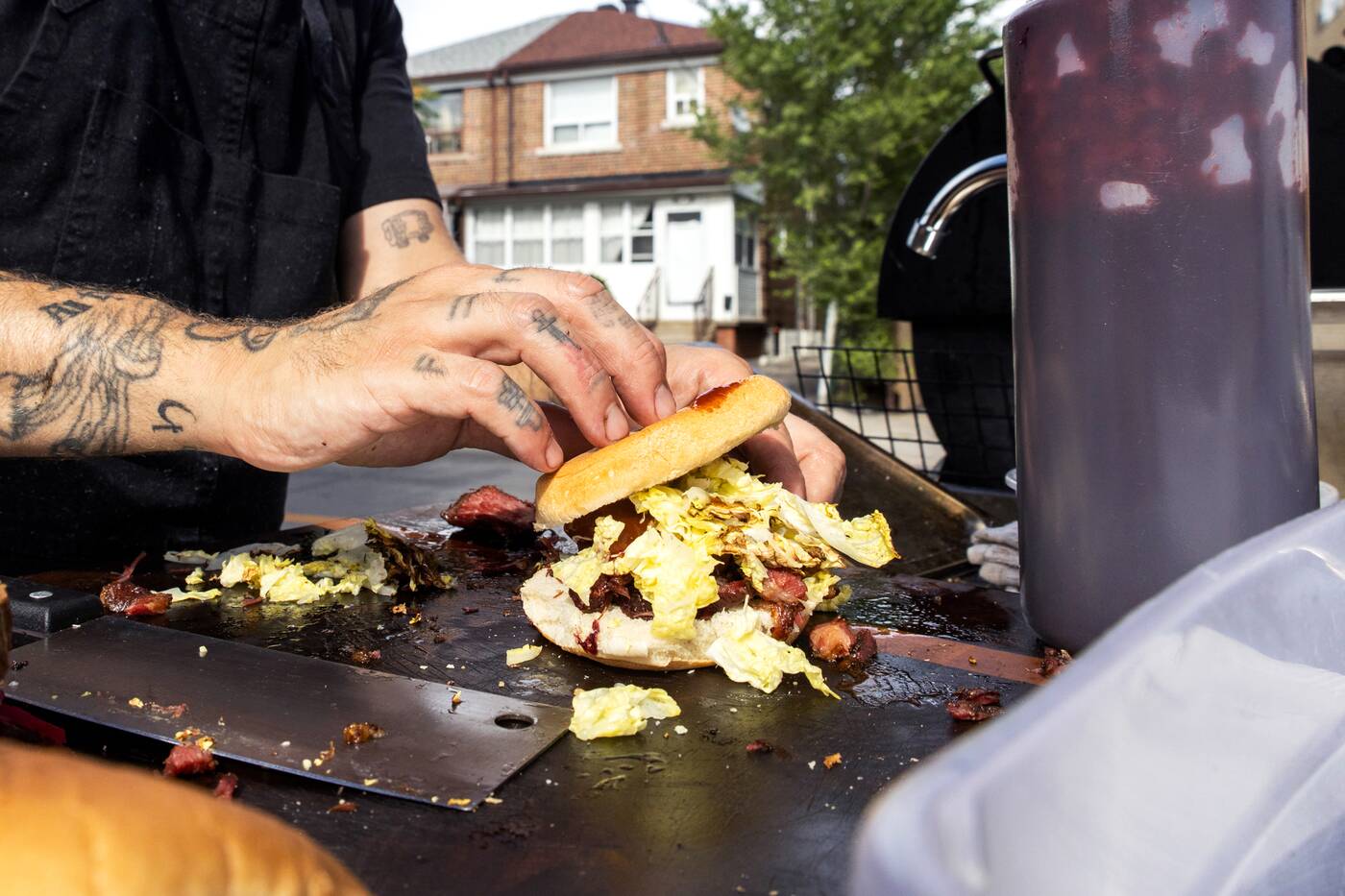 Dalgliesh-Switzer similar wanted to do something different that couldn't be found everywhere: pastrami sandwiches. 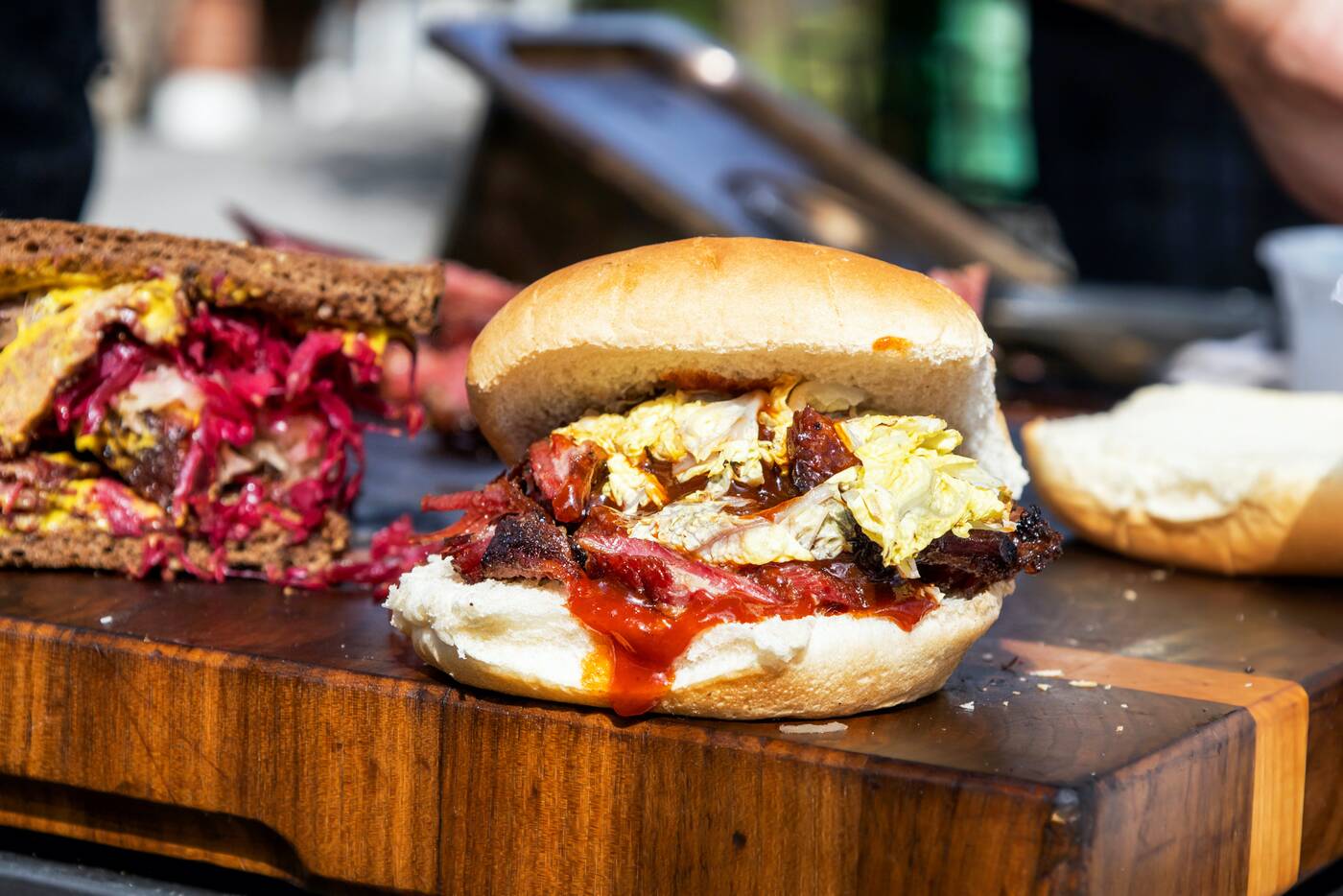 "I like 'em, couldn't find a good one in the city so I figured it was a good niche to start with," says Dalgliesh-Switzer. "It's also perfect for a cart." 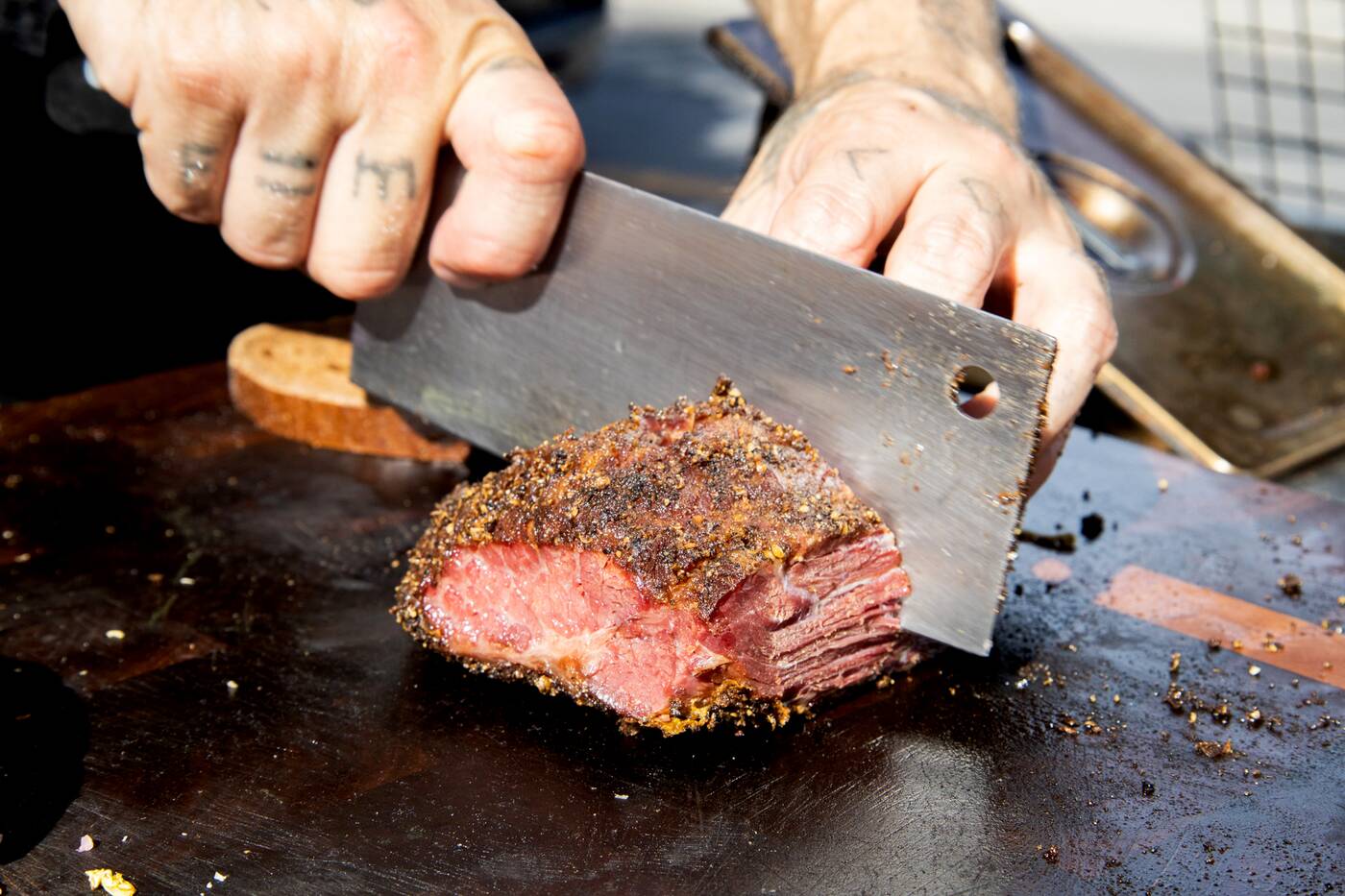 He dry cures his pastrami for seven to nine days and cooks it sous vide for two to three days. Then on on the morning it's ready to go out, he rubs it, and then smokes it for five to seven hours before hitting the road. 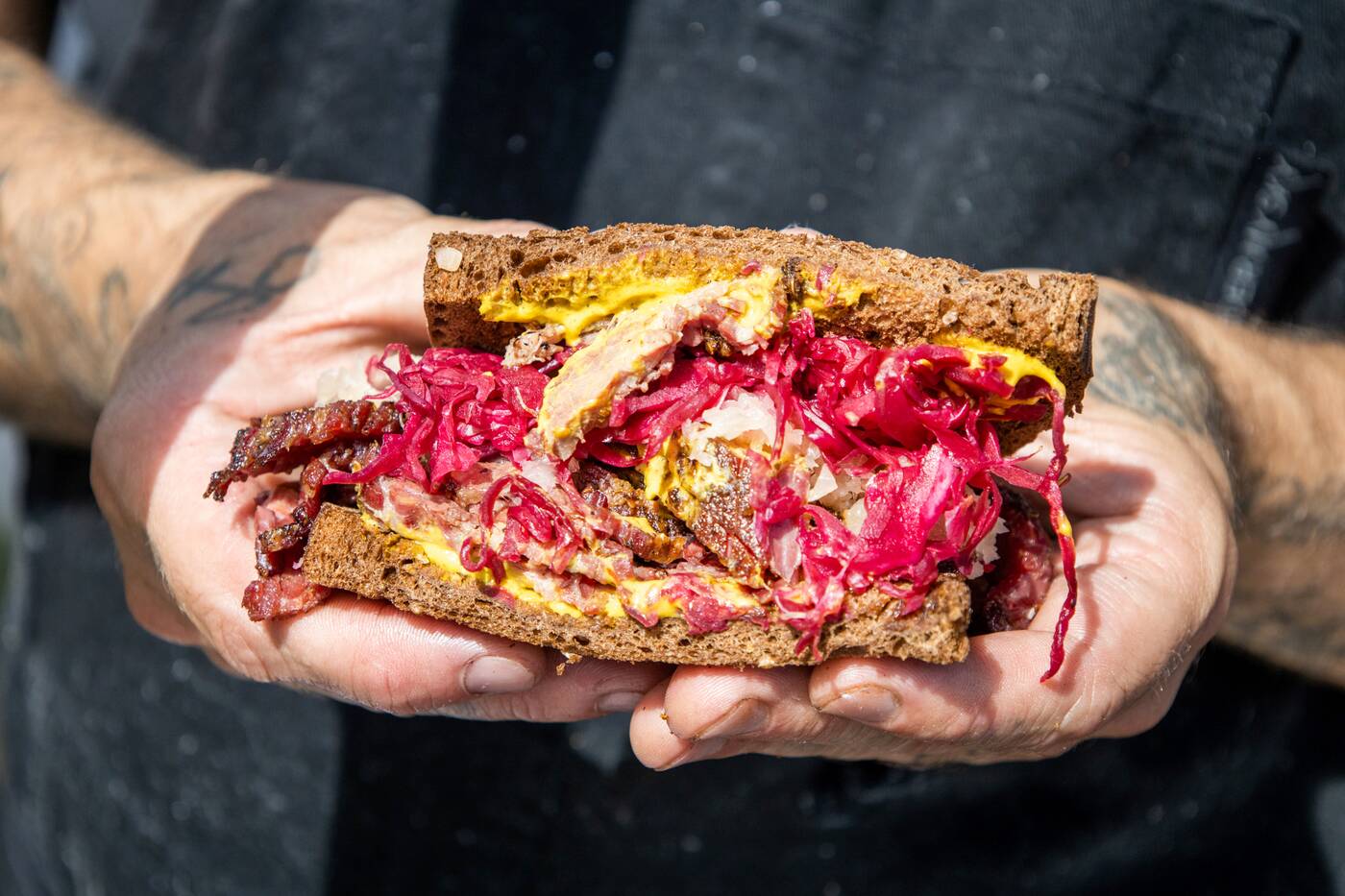 The result is a super tender, smokey and meaty experience, which you can typically get as a classic pastrami sandwich with black pepper mustard and purple and white 'kraut on pumpernickel, or in a special of some kind. 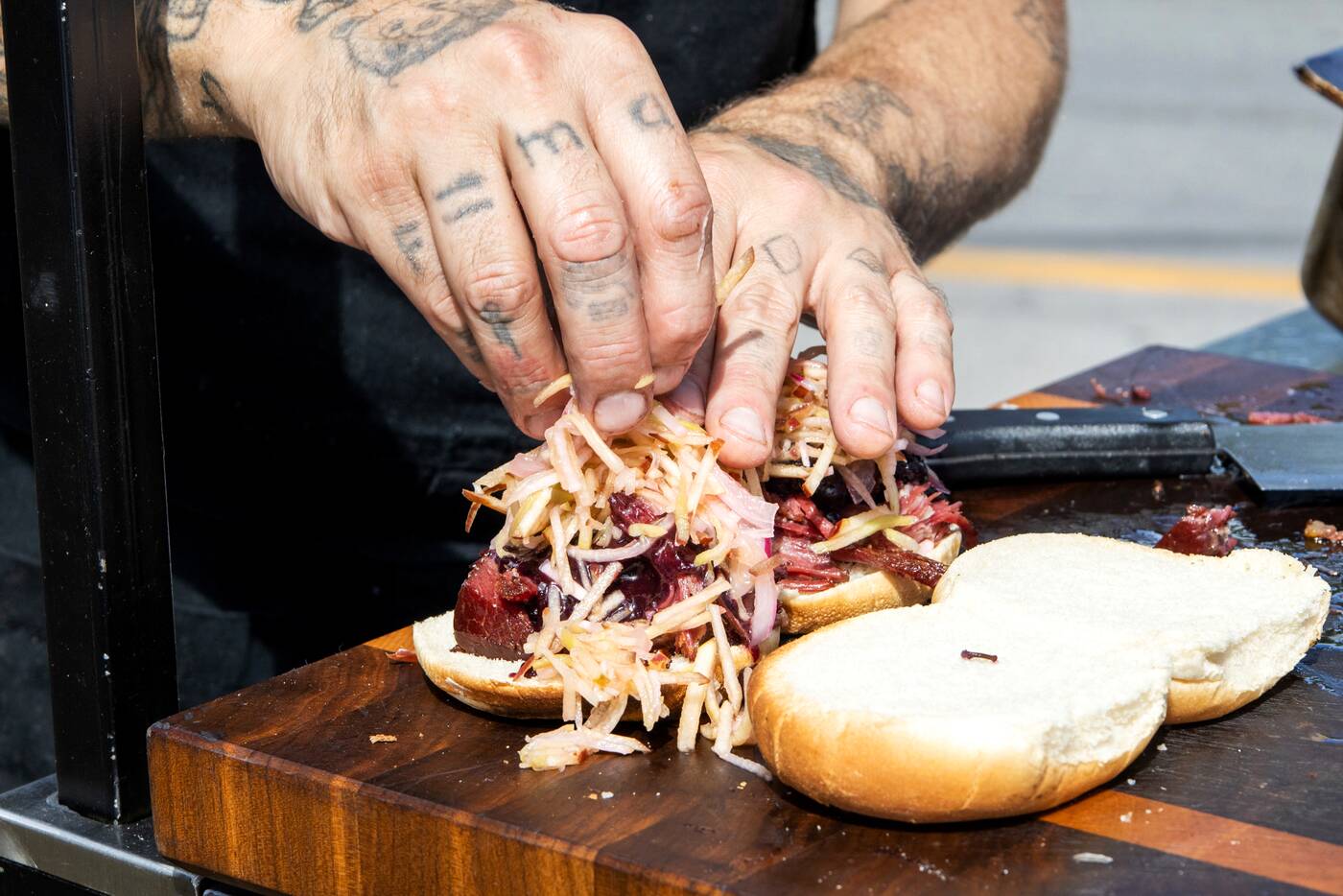 "I ground the pastrami into burgers, dressed them like a Brooklyn avenue on Brioche with sliced apple and a Japanese style Russian dressing. Macaroni and cheese with tomato confit, shredded pastrami, and brussel sprouts," says Dalgliesh-Switzer.

"Did a take on a Philly cheese steak where the beef and onions were stuffed into a hoagie and then filled up with cheese foam. I'm running a pickled blueberry and apple pulled pastrami sandwich right now. I can't really sit still so it usually changes every week or two." 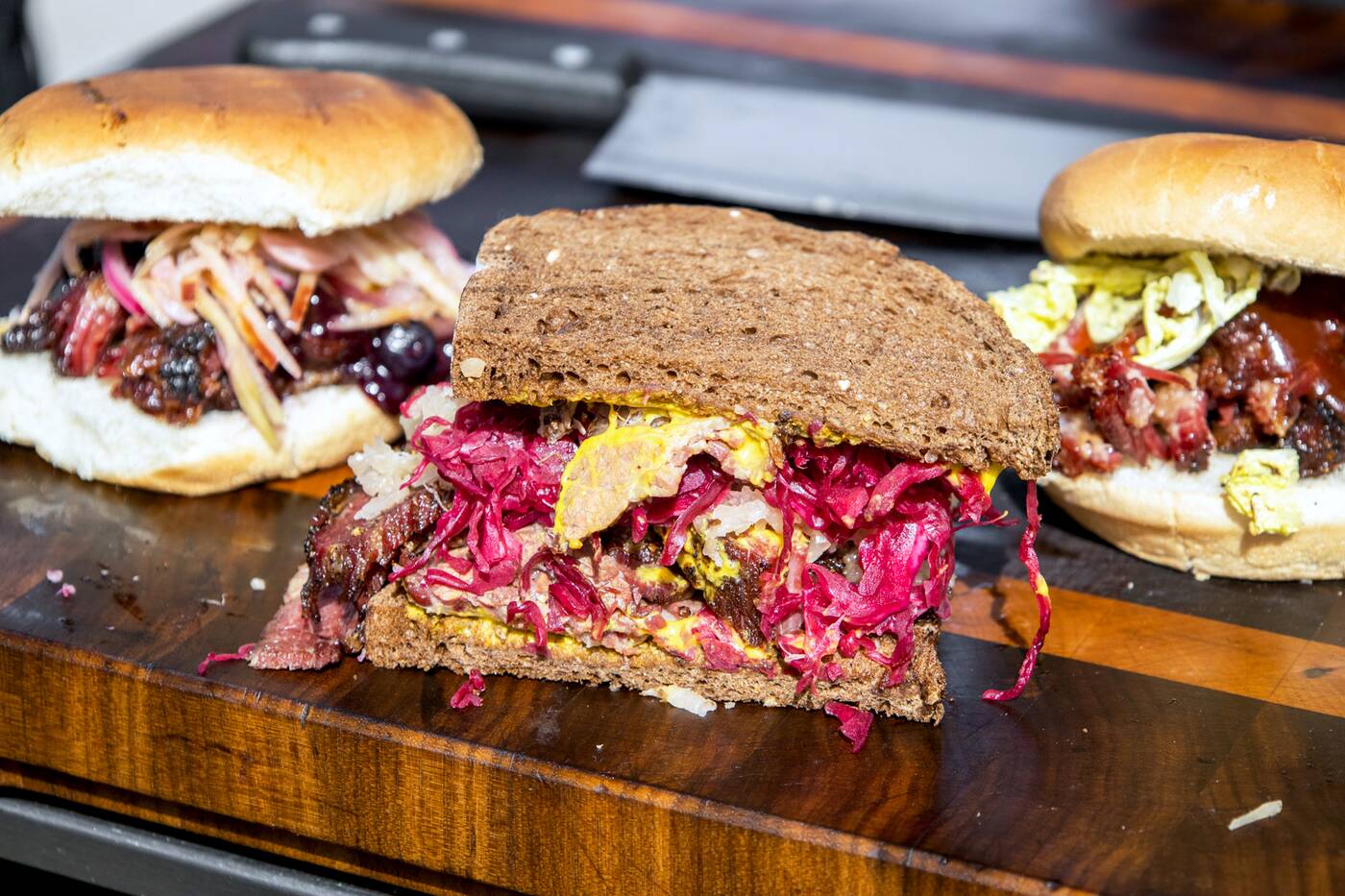 The hearty classic is $7 for a thick half sandwich, and no item typically costs more than $10. 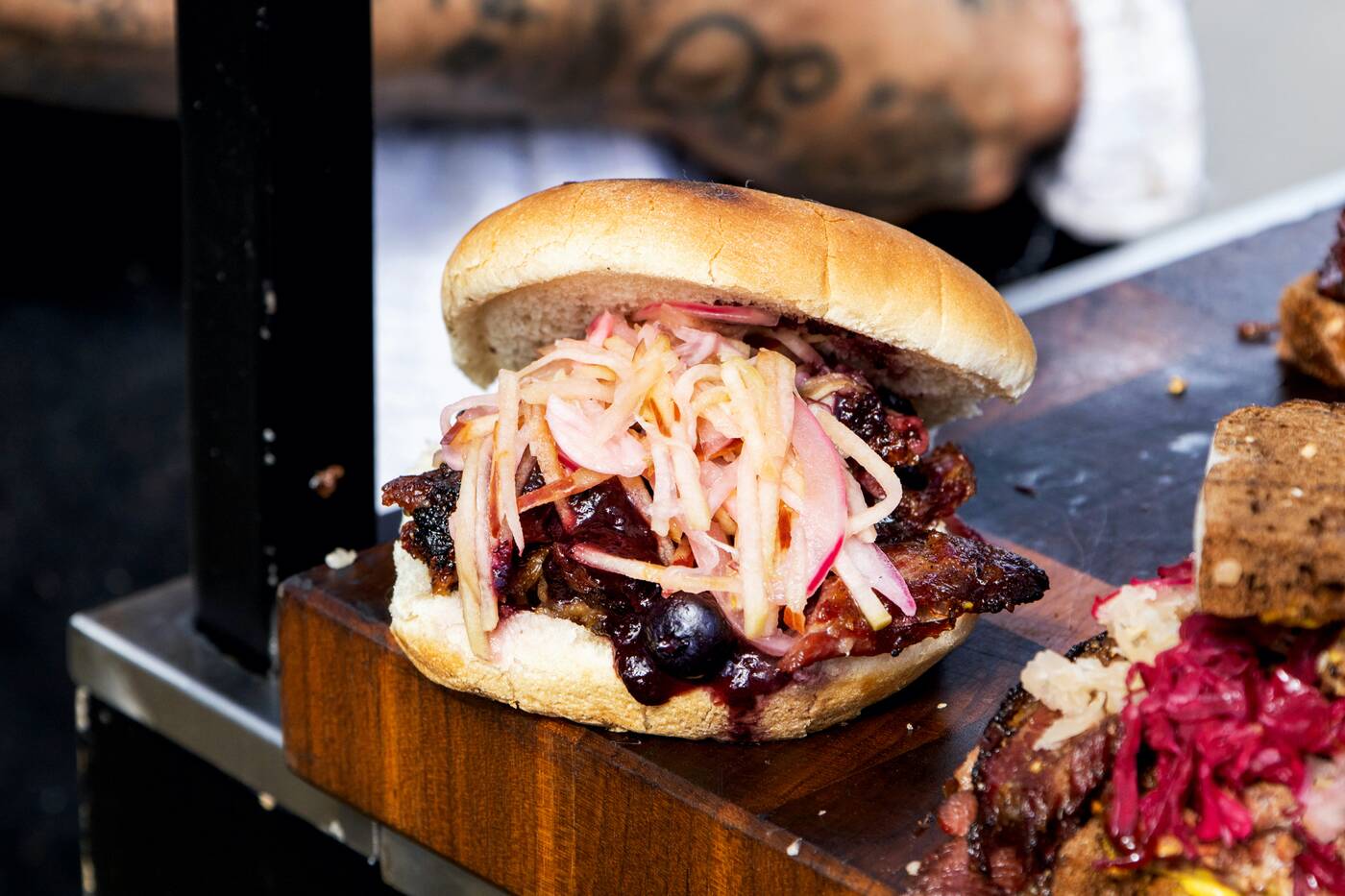 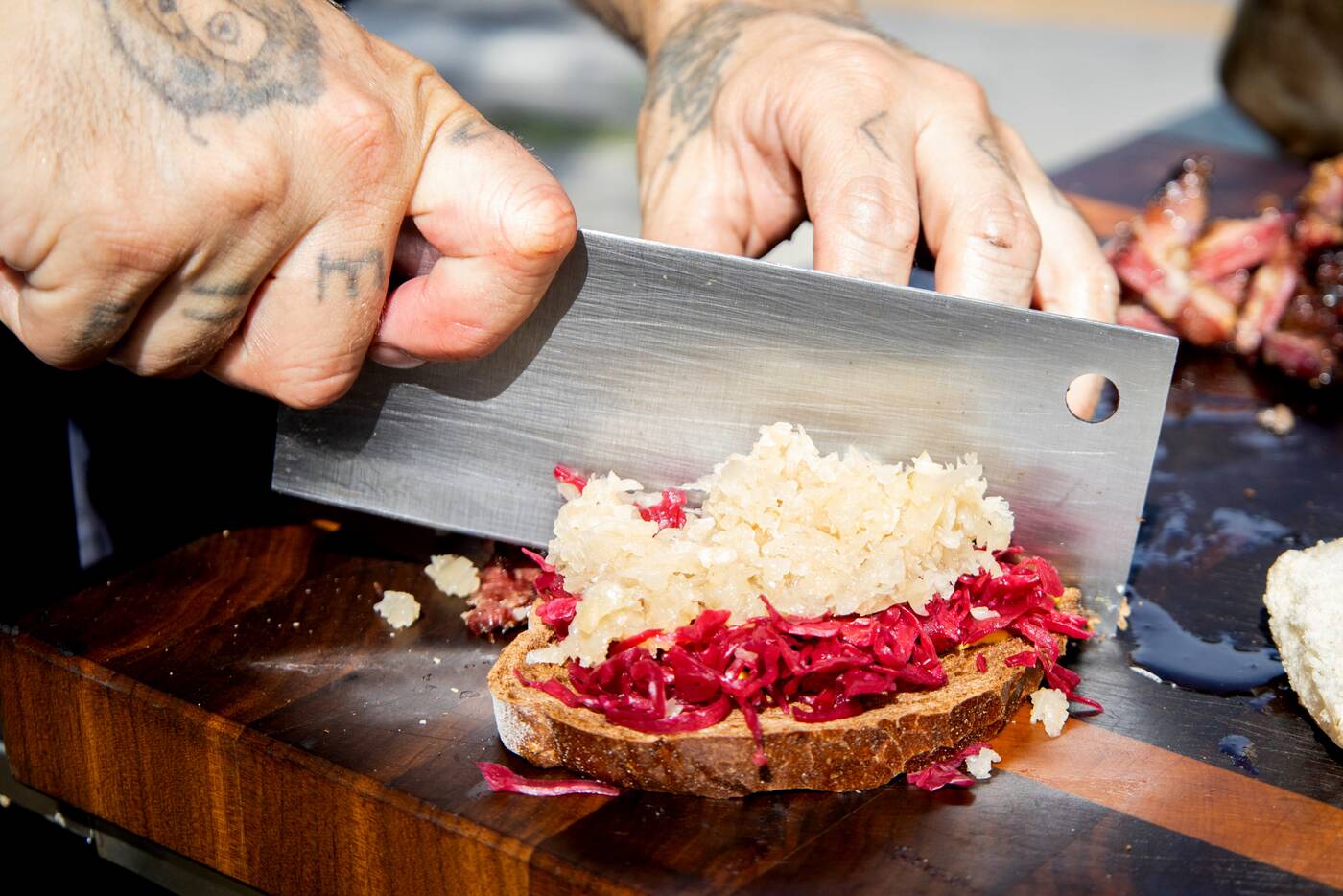 He even does pulled pastrami sandwiches for $5 and meat on a bun for $3. 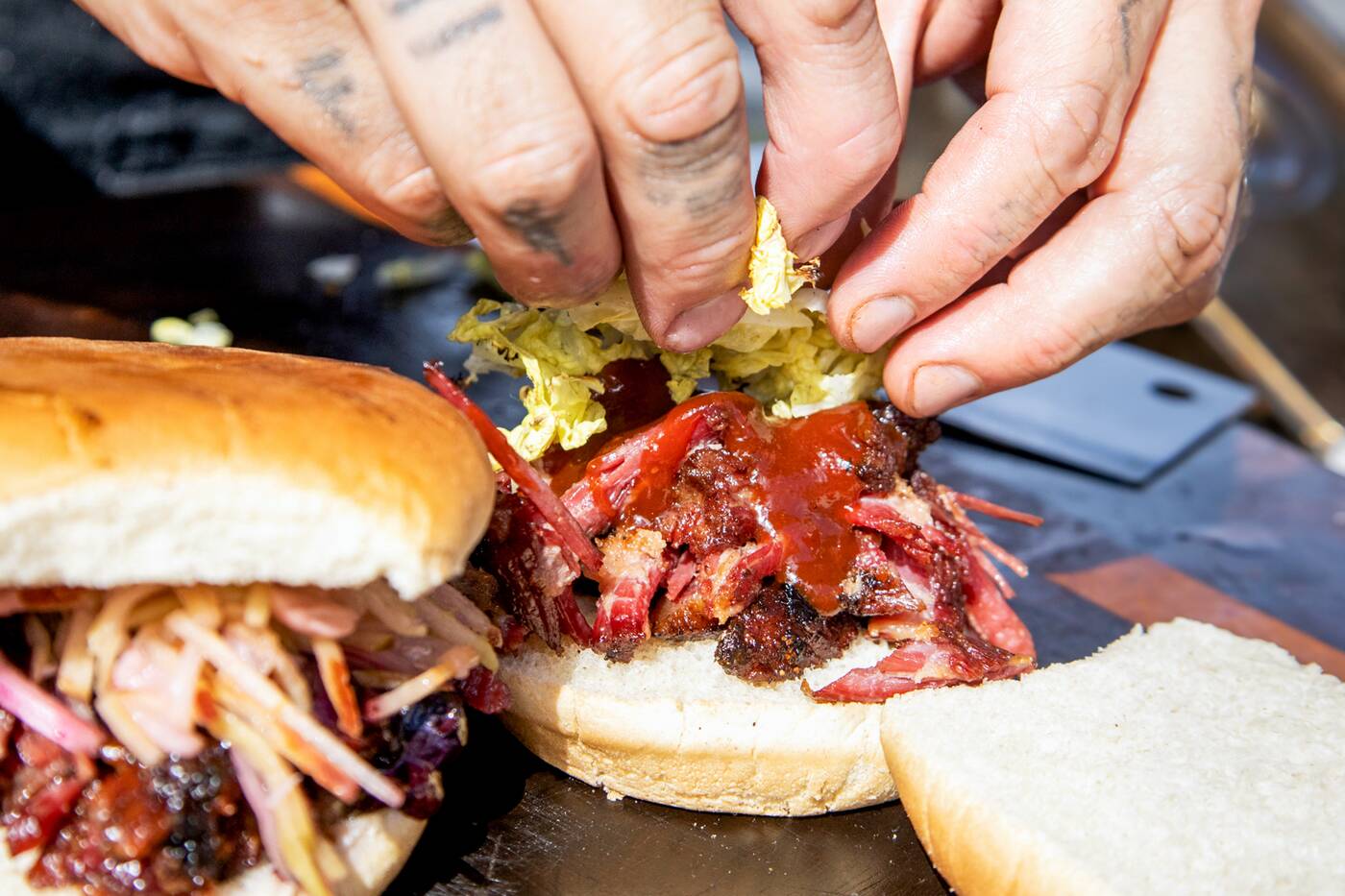 "I think it's the only great pastrami in the city right now. I learned my lessons trying to rush the process and having the ability to say "sorry you gotta wait" and just accepting the reality of a limited stock keeps the quality up," says Dalgliesh-Switzer.

"I have so much confidence in it that I've felt free to go completely nuts changing the menu up and just throwing pastrami somewhere in it. I make everything from scratch, short of the bread and the odd irreplaceable thing like Maggi on a banh mi." 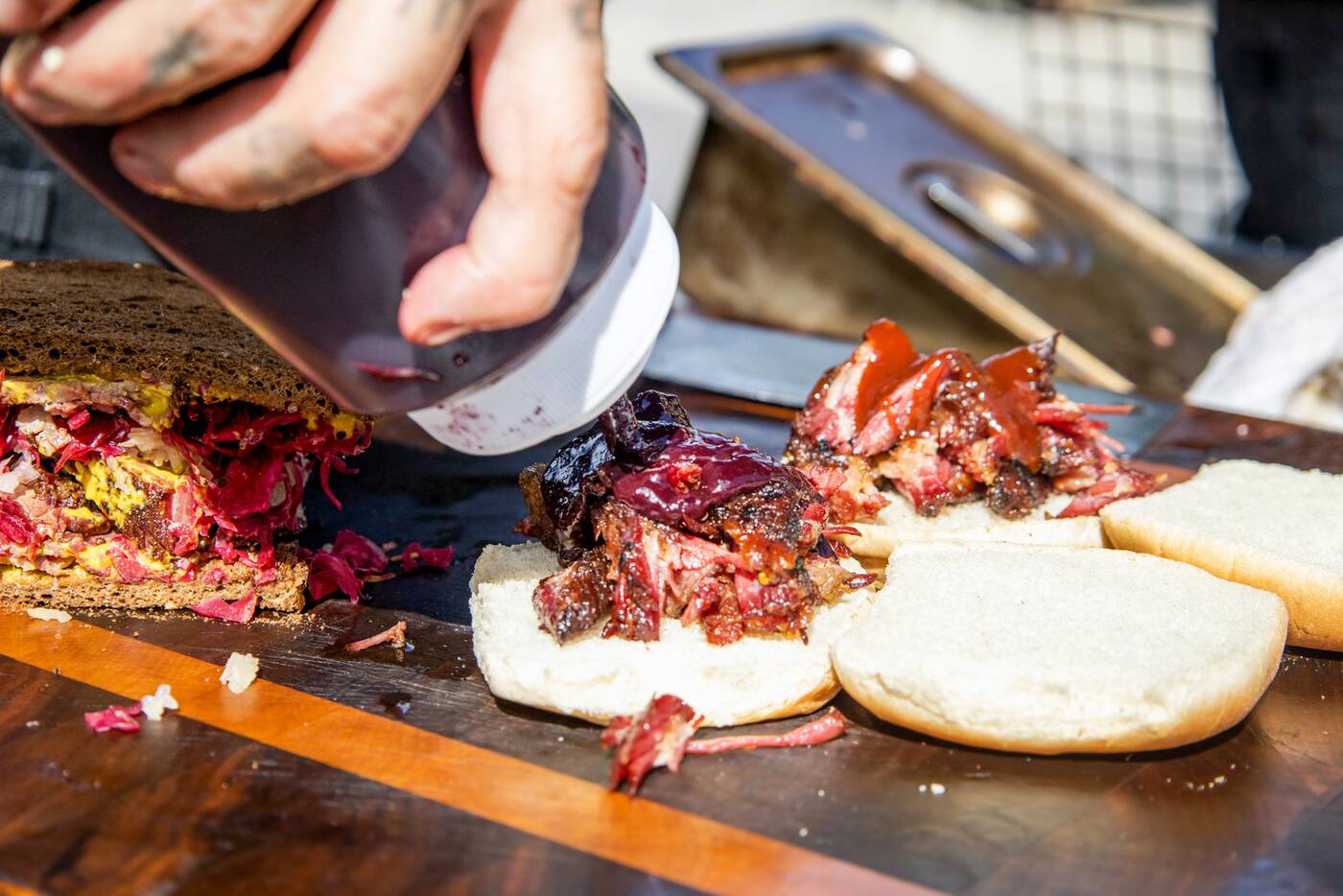 The sandwiches have become so popular, especially the signature classic pastrami sandwich, that you can't always get them, and when there's a post telling you when to go get sandwiches you better head over early.

Though he's doing pastrami sandwiches and shares the Switzer name with Toronto's most famous deli, any connection to it is tenuous.

"I'm almost certain I'm related to them. Two branches of the Switzers came here from Radom Poland back when it wasn't so good to be Jewish," says Dalgliesh-Switzer.

"One settled in Toronto and the other in Calgary. I'm from the latter bunch and figured it was a good name to make pastrami with. I found out after I got the business licence that there was already a legacy. I've been trying to find out how to get in touch with anyone still associated, but no luck yet." 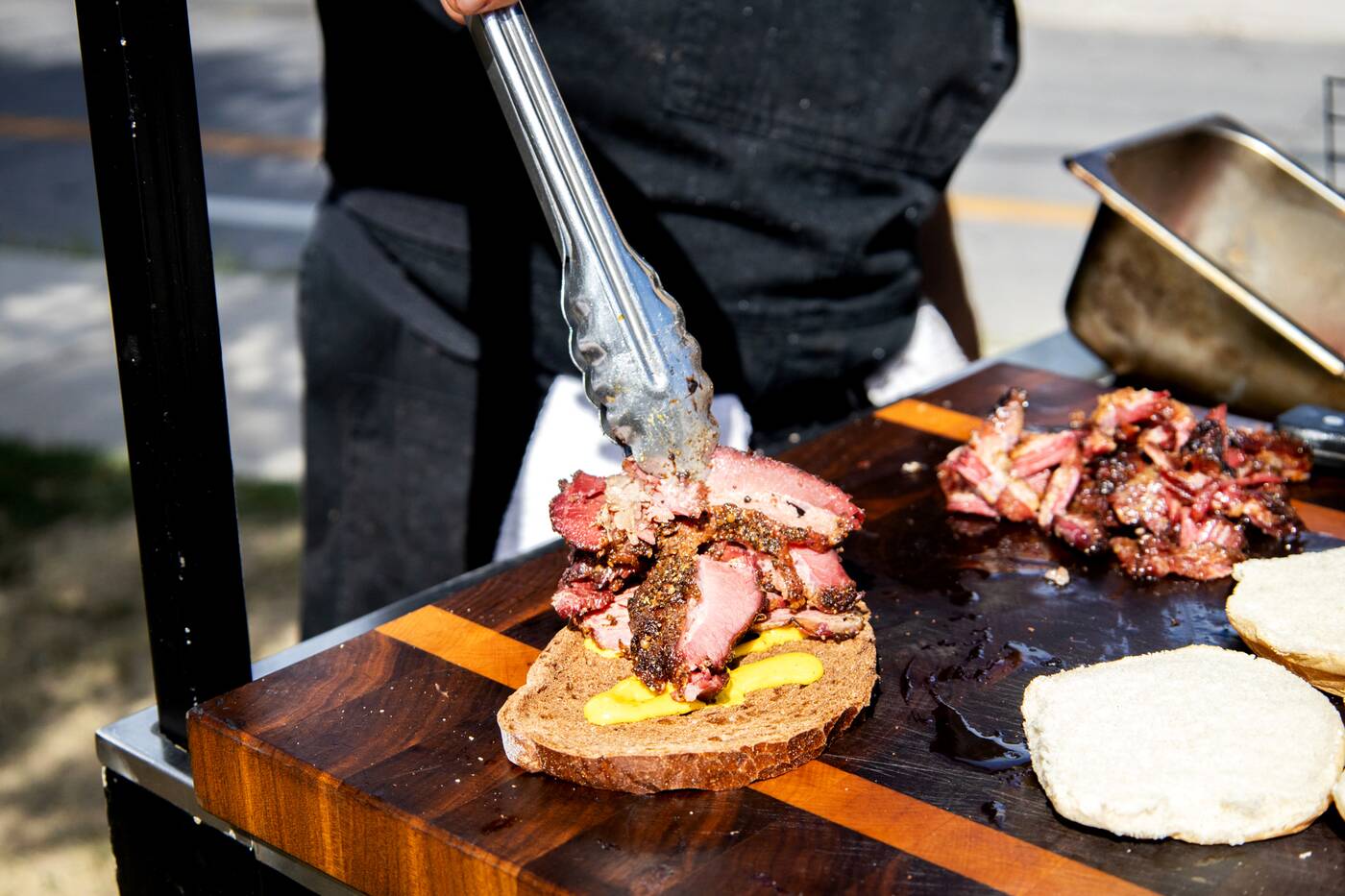 "It's tricky keeping up with demand because of the long curing and fermenting times," says Dalgliesh-Switzer. "It's the only non rotating thing on the menu so far, but it's not always in stock." 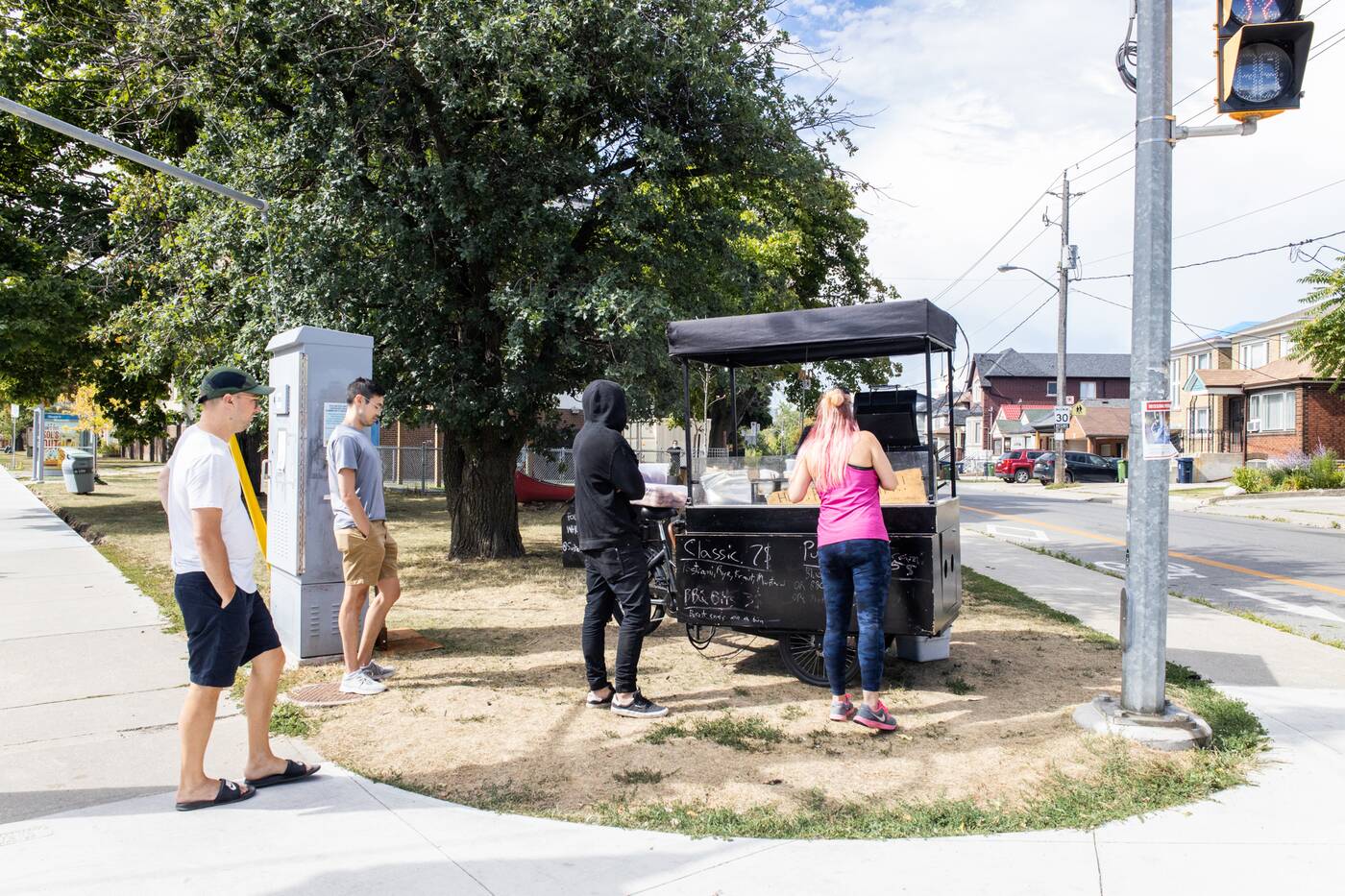 He says the response to the cart has been "unreal" and "overwhelming." This is his only job, and he hopes to keep it that way. 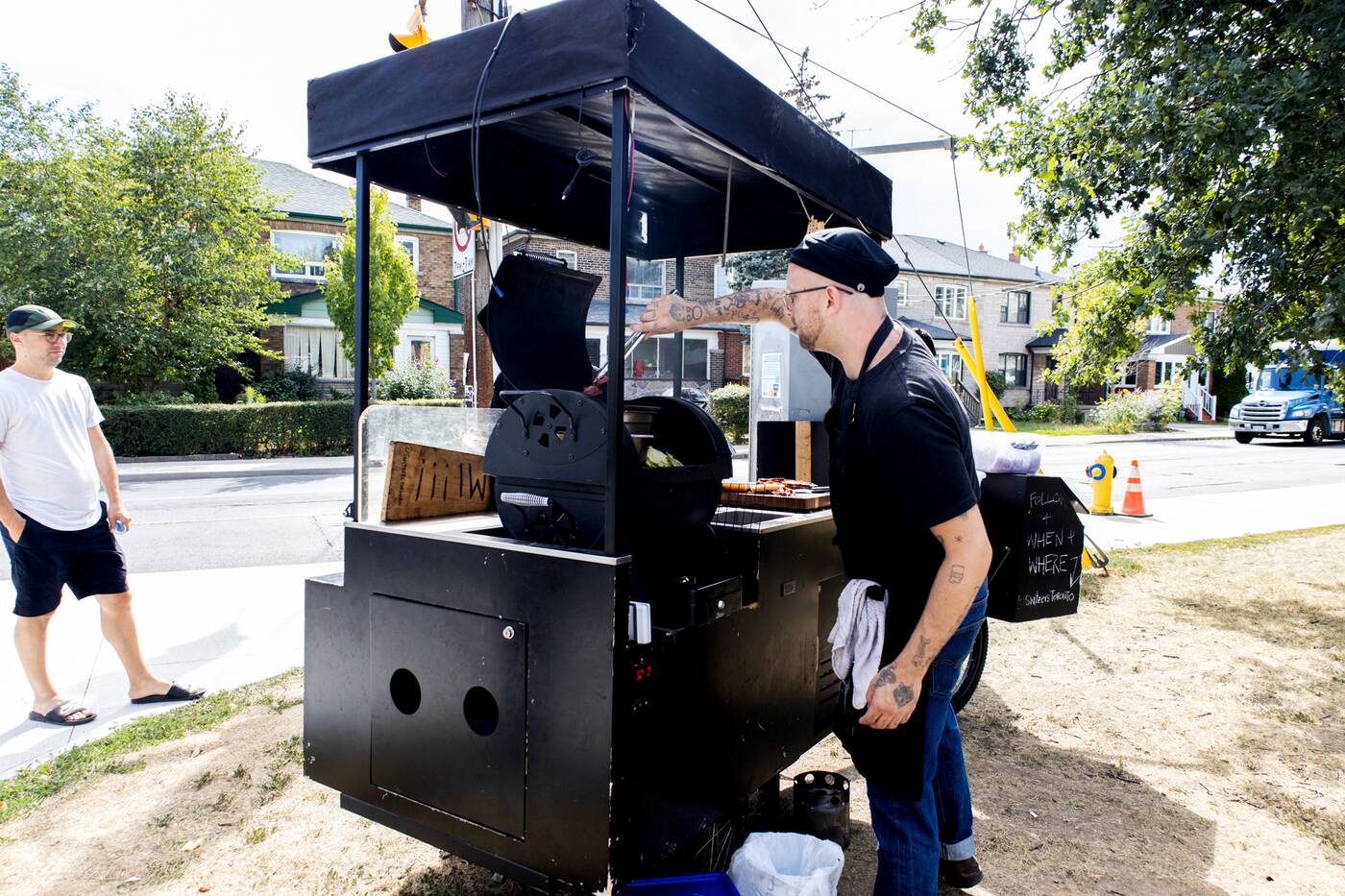 "I feel like I've been frantically laying track since this train took off," says Dalgliesh-Switzer. "People have been so supportive, enthusiastic, and patient. It makes me feel a sort of proud obligation to hawk as much as I can." 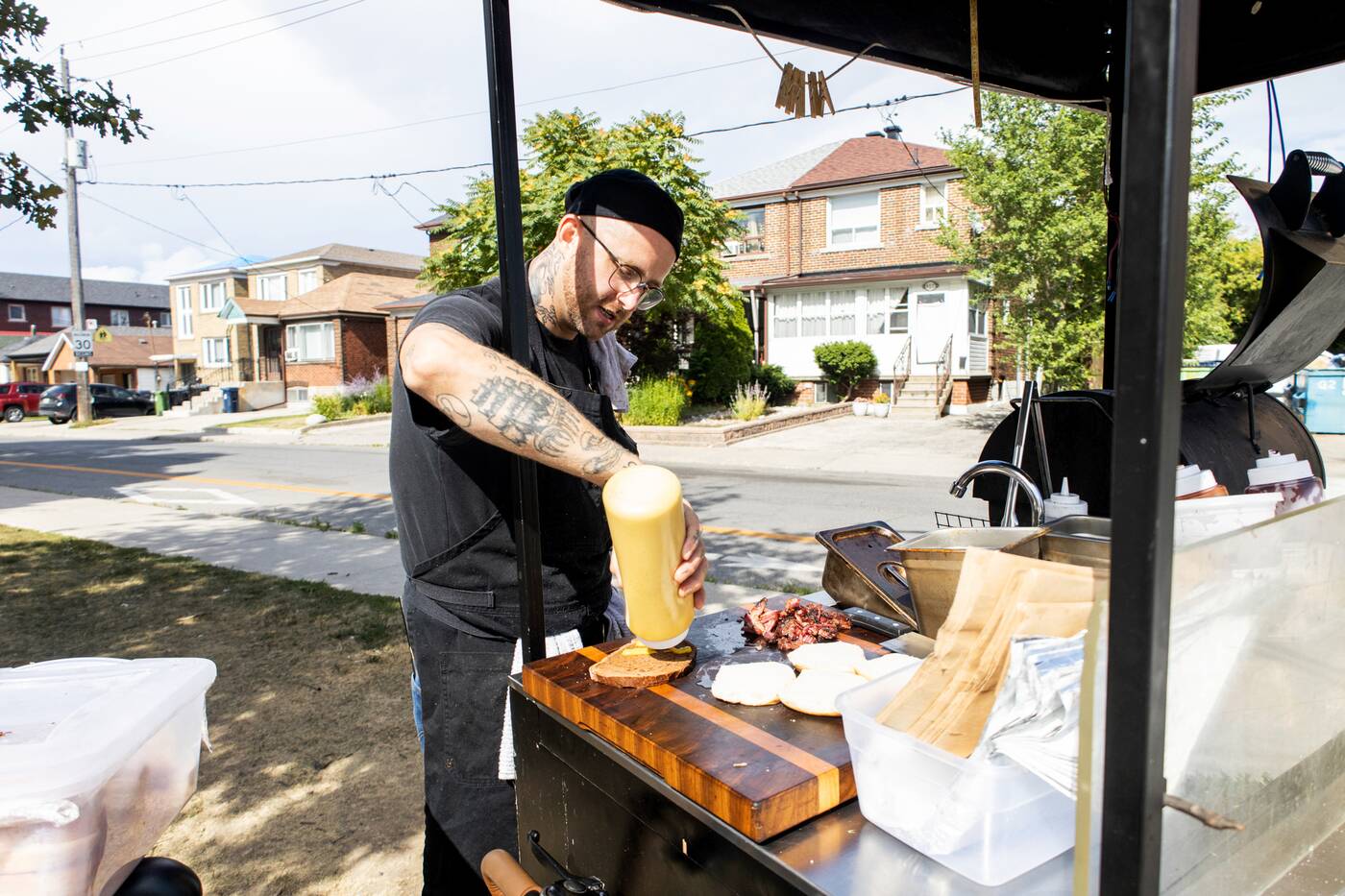 As for future plans, he keeps things vague, but describes his ambitions as "pie in the sky," so you'll want to watch out for this sandwich maker. 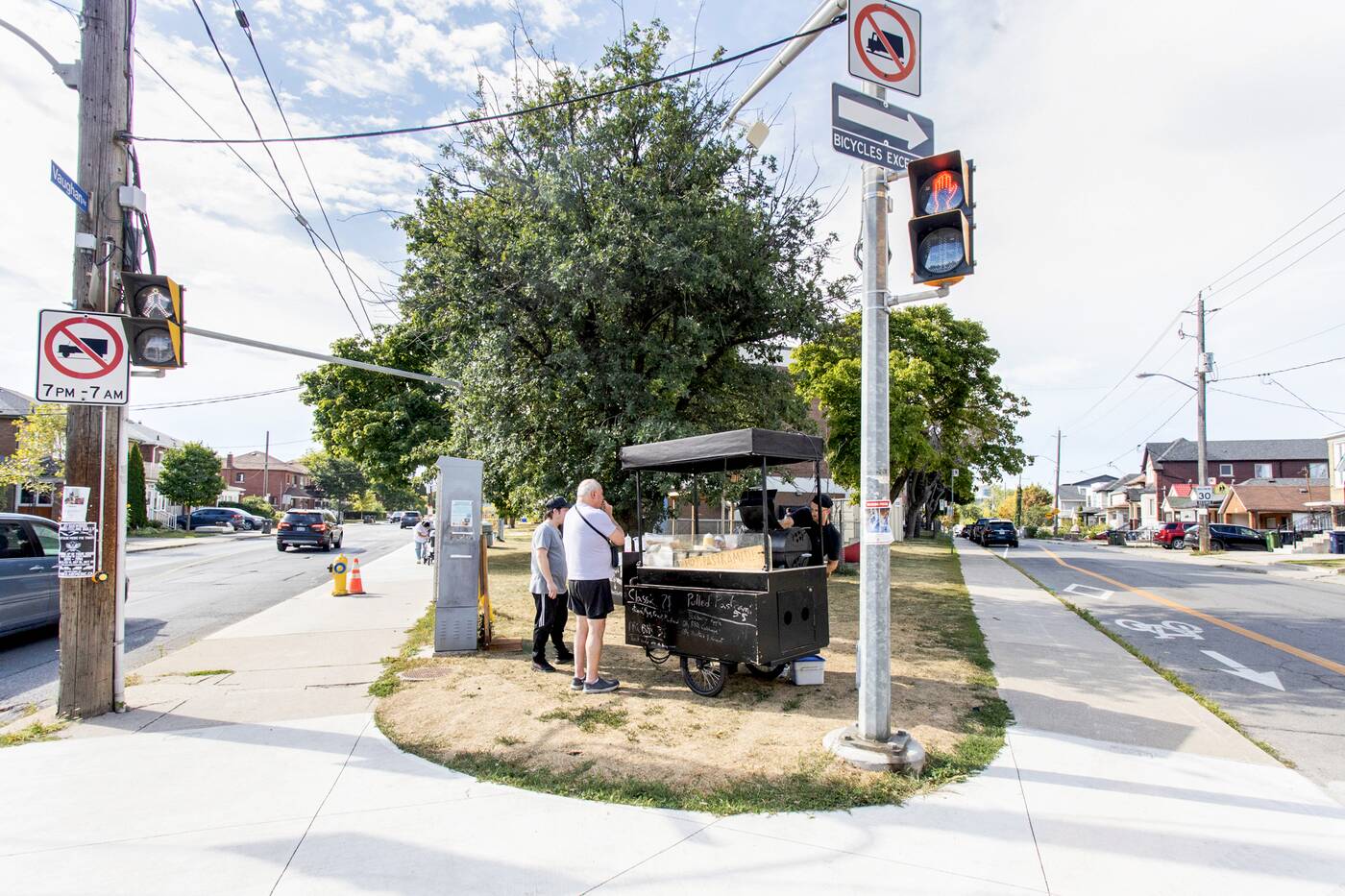 "Until then though, I just figured out how to make sweet corned beef cupcakes with mashed potato frosting," says Dalgliesh-Switzer.