Peameal bacon sandwiches were declared Toronto's signature dish back in 2016, and maybe five years later it's time for a refresh: should we officially change it to the Jamaican patty?

The reason peameal sandwiches are synonymous with Toronto is mostly historical: the city was once known as "Hogtown" for its impressive pork-packing exports. The signature dish was decided on by a public vote that also included patties, "street meat" and burritos as options. 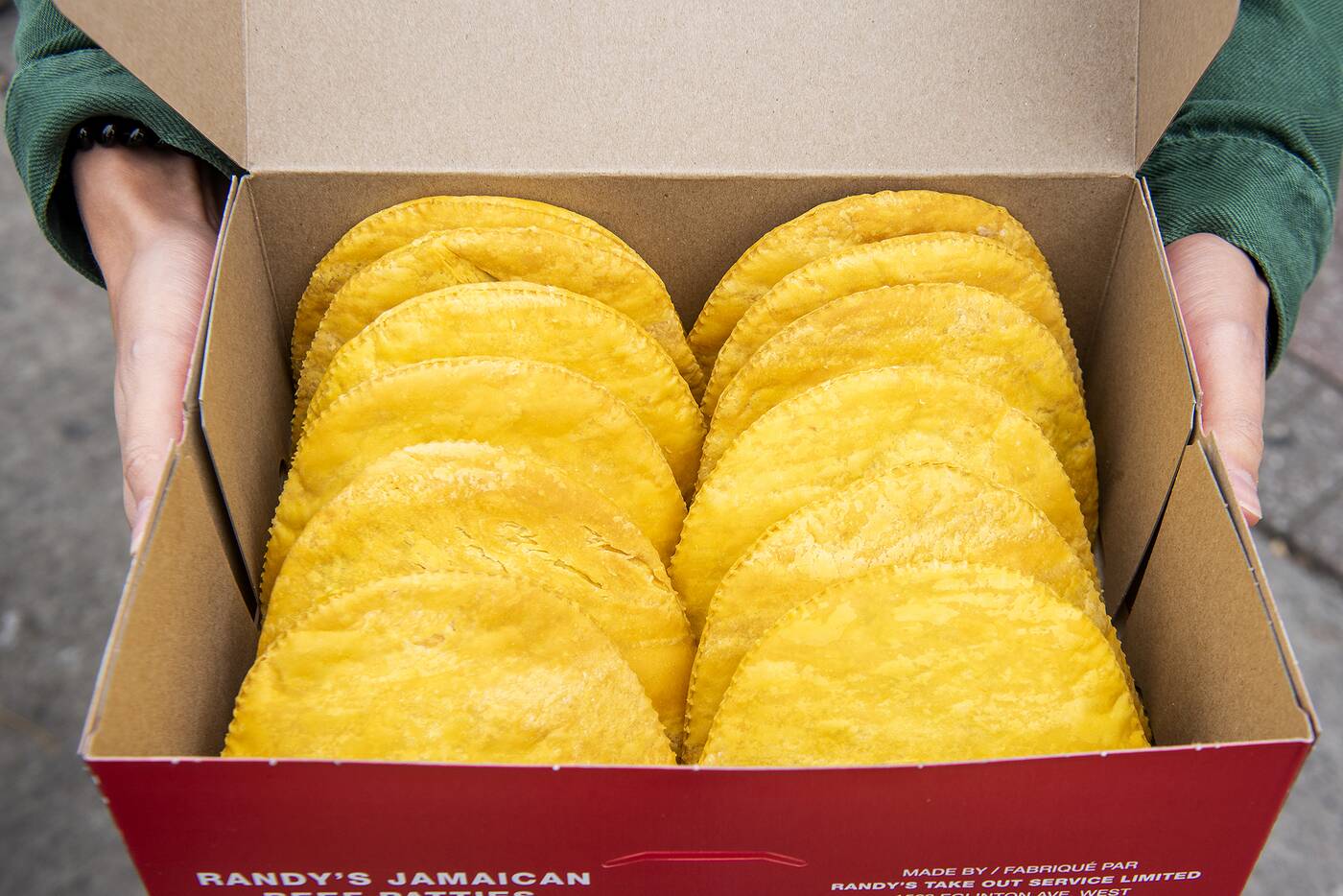 A box of patties from Randy's in Little Jamaica. Photo by Hector Vasquez.

Peameal bacon came about as part of a way to preserve pork loin using a coating of ground-up peas that also kept out insects. It's said that 1800s Toronto pork purveyor William Davies may have been the first to substitute crunchy cornmeal, which is still used today.

Carousel Bakery in the city's St. Lawrence Market arguably popularized peameal bacon and eating it as a sandwich on a bun. The father of the current owners was a butcher who made his own peameal and thought to fry it and put it on a crusty bun.

Paddington's in St. Lawrence has become known for serving peameal sandwiches as well, along with some old school diners and select other spots in town. 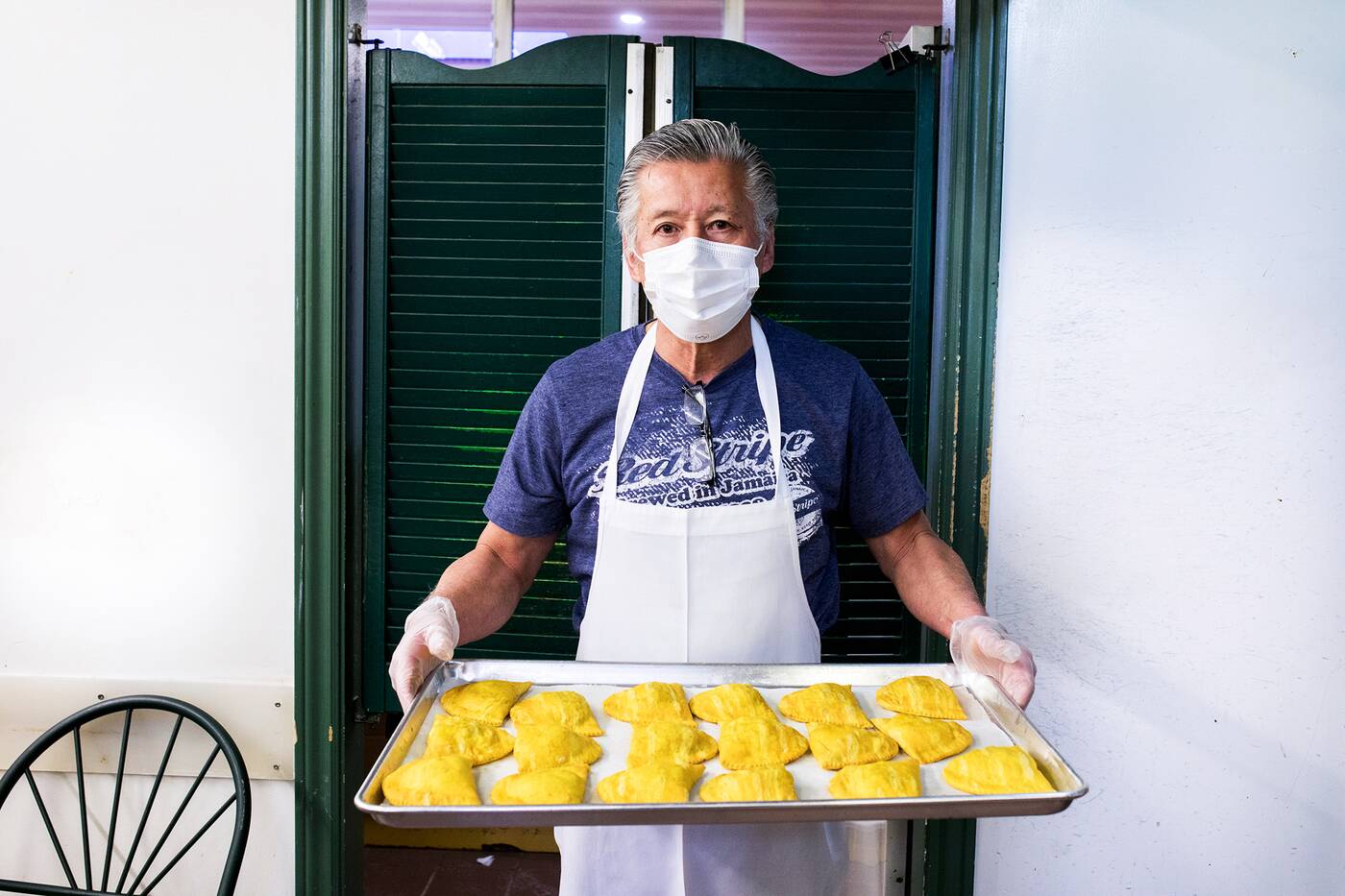 Though peameal sandwiches may have been named the signature food of Toronto in 2016, the city already had a Jamaican Patty Day by 2012: Feb. 23.

Stush Patties founder Opal Rowe calls Toronto's special day something that's "unique to this city." She feels the evidence that Jamaican patties should be Toronto's official dish isn't just in that day, it's all around us every day.

"It's in schools, convenience stores and of course the subway stations," Rowe tells blogTO. "Peameal sandwiches are mainly available at markets like St. Lawrence Market and at diners." 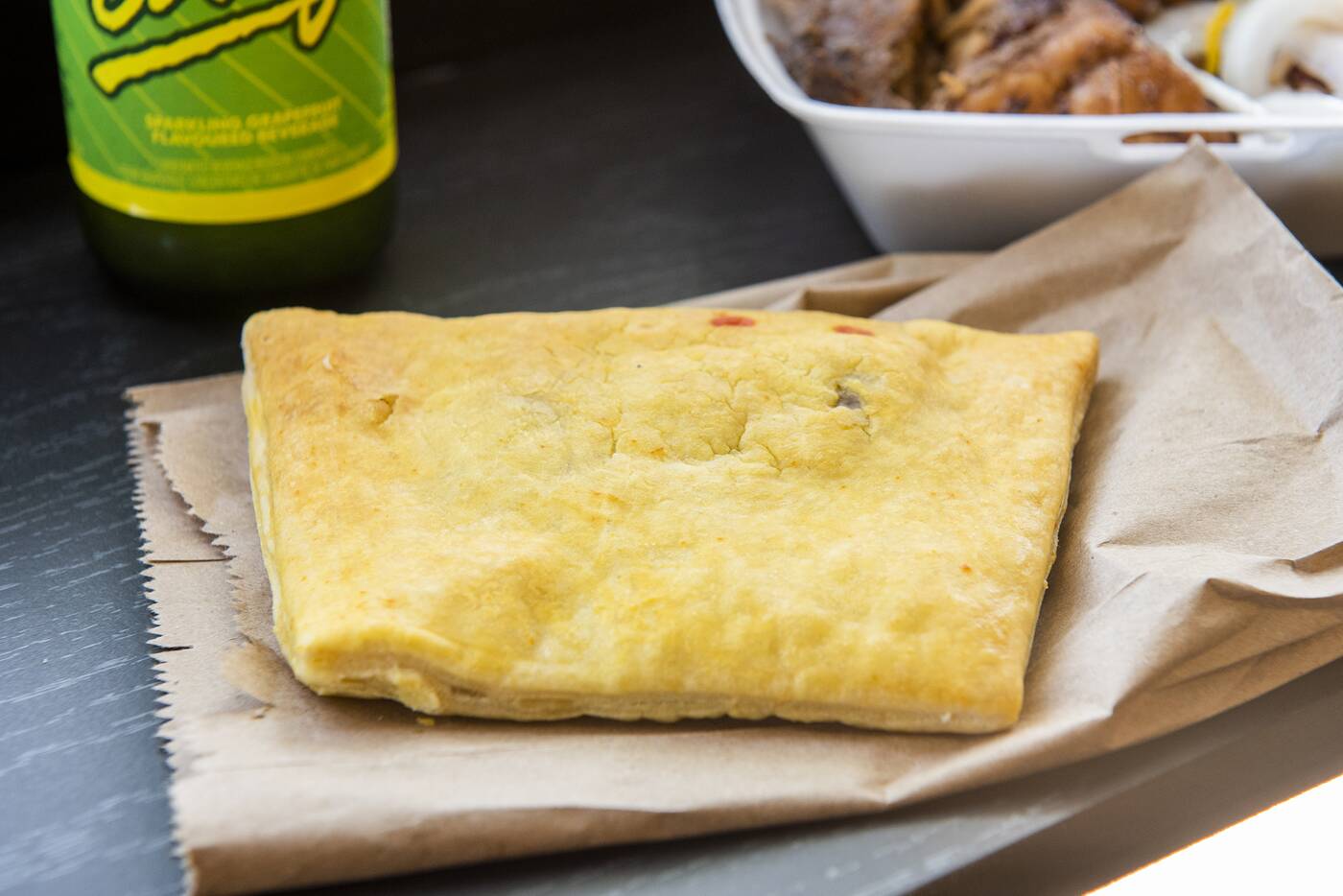 A classic patty from the legendary Fahmee Bakery. Photo by Hector Vasquez.

Everyone in Toronto consumes Jamaican patties not only because they're everywhere, but also because everyone can afford them.

"Most places a patty and pop costs $5, making it very affordable for most people," says Rowe.

"I personally grew up on them when the last toonie I had in my pocket as a teenager meant I can get a tasty filling supper," Fahmee Bakery owner Faiz Abdella tells blogTO.

"You can have it for breakfast, lunch, dinner, snack and you won't feel weird about it." 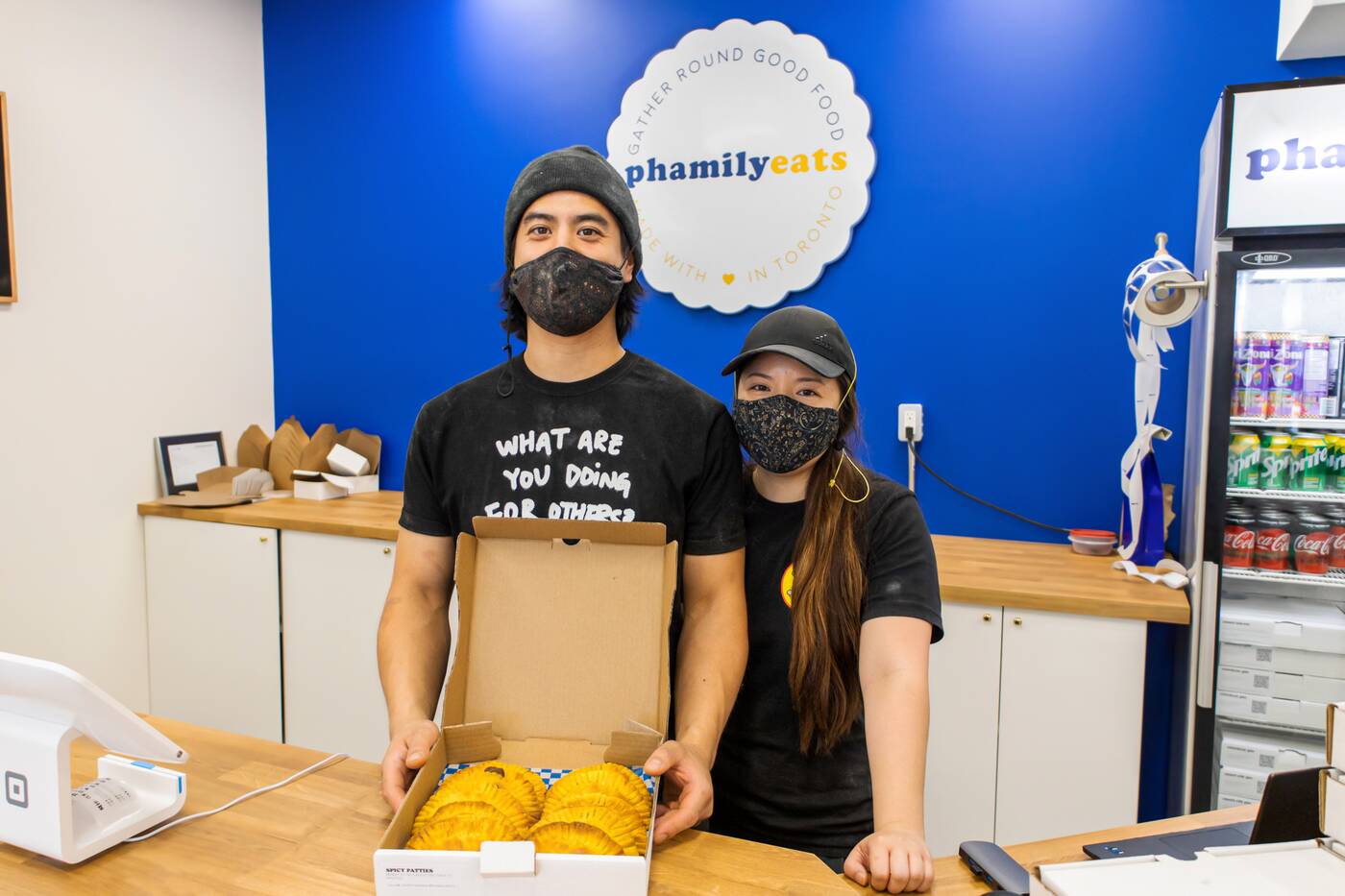 Showing off a box of patties at Phamily Eats. Photo by Fareen Karim.

Fahmee is the bakery responsible for making the legendary patties available at Warden and Bathurst stations, which locals swear by. Abdella says the old owner of the bakery knew people would be snacking on them on the TTC and specially designed them to be slightly less flaky and messy.

"There is no way this city eats more peameal sandwiches than Jamaican beef patties," says Abdella.

"Anyone who grew up in this city had to have a Jamaican patty. Whether you microwaved it at the local corner store after playing outside as a child, to getting it before or after work." 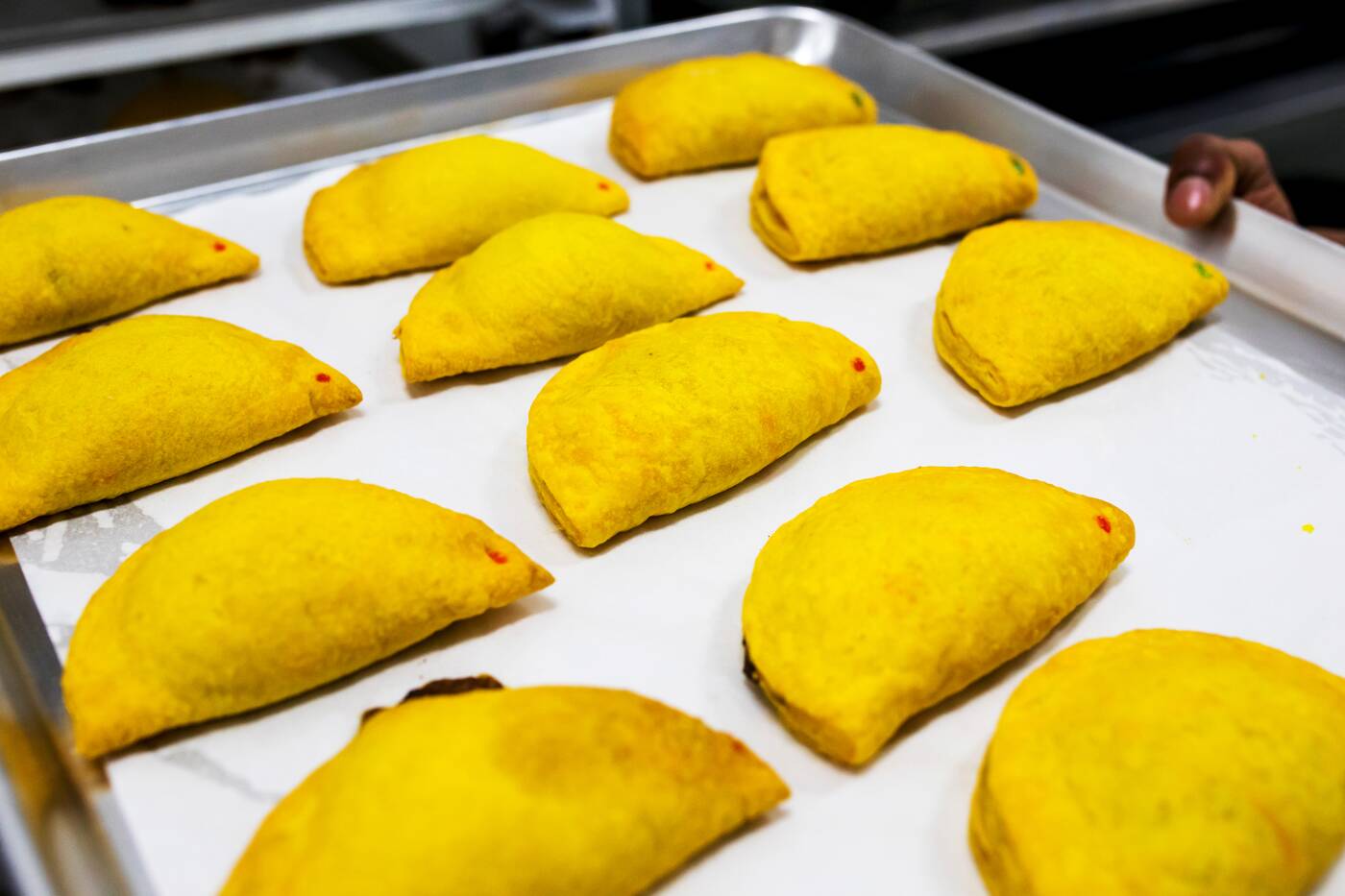 A tray of patties at Patty Cake and Ice Cream. Photo by Fareen Karim.

"I don't know what school is like now, but our generation had Jamaican cafeteria ladies in every school. Which meant there were Jamaican patties available for breakfast, recess, lunch, and after school," Peter Pham of newer patty shop Phamilyeats tells blogTO.

"If you didn't get your patties at school, you got them at your nearest convenience store. If you graduated from the convenience stores and the cafeteria patties, you knew where the patty shops were."

Rowe agrees there's a nostalgia factor to Toronto's love of patties associated with those schoolyard days of only having a toonie to independently pay for snacks.

For a lot of Toronto kids, patties might have been the first meal we could buy for ourselves along with items like slices of pizza. 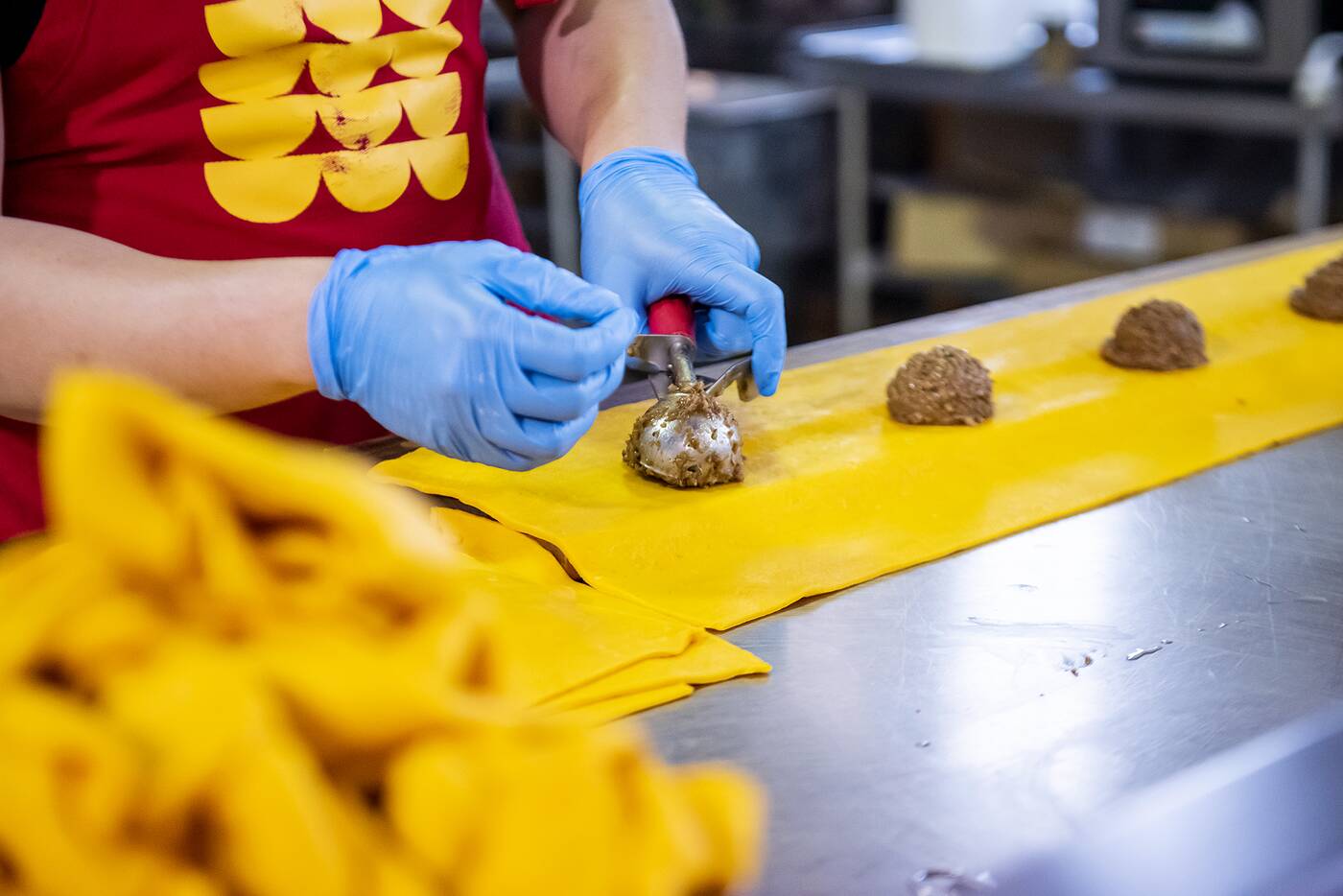 "It's something that a lot of people would have eaten at some time or another, especially if they went to school in Toronto, often rousing a feeling of nostalgia," says Rowe.

"The childhood connection to food is what makes the patty so meaningful and important," says Pham.

"As I get older, I crave the food experiences from my childhood, and I think this resonates with most people who had the luxury and privilege of having home-cooked meals. There's something deeply emotionally connected with our food experiences when we were kids. To me the patty is a time machine that brings us back to those memories."

Rowe also credits the wide appeal of patties to the way they can cater to different diets and are recognizable to multiple generations. 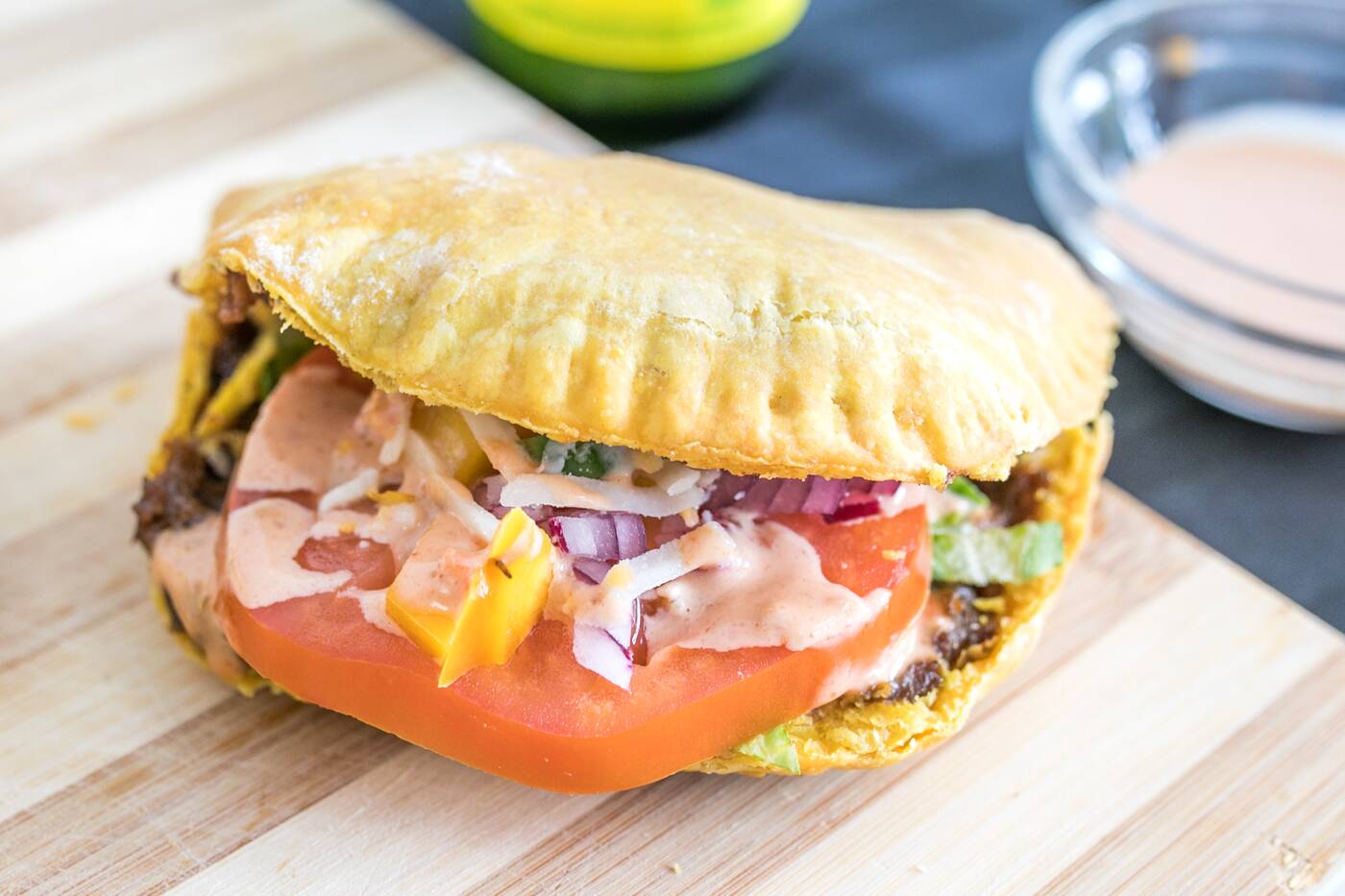 A patty sandwich at Patty Stop. Photo by Fareen Karim.

"Although beef is by far the most popular filling, they are also available with other fillings, including chicken and vegetables, making it have a wider appeal for more people," says Rowe.

"Peameal sandwich is more known among boomer Canadians, whilst the patty is renowned among different age groups, immigrants and non-immigrants alike."

In this way, Jamaican patties might be more reflective of Toronto's identity as a whole. 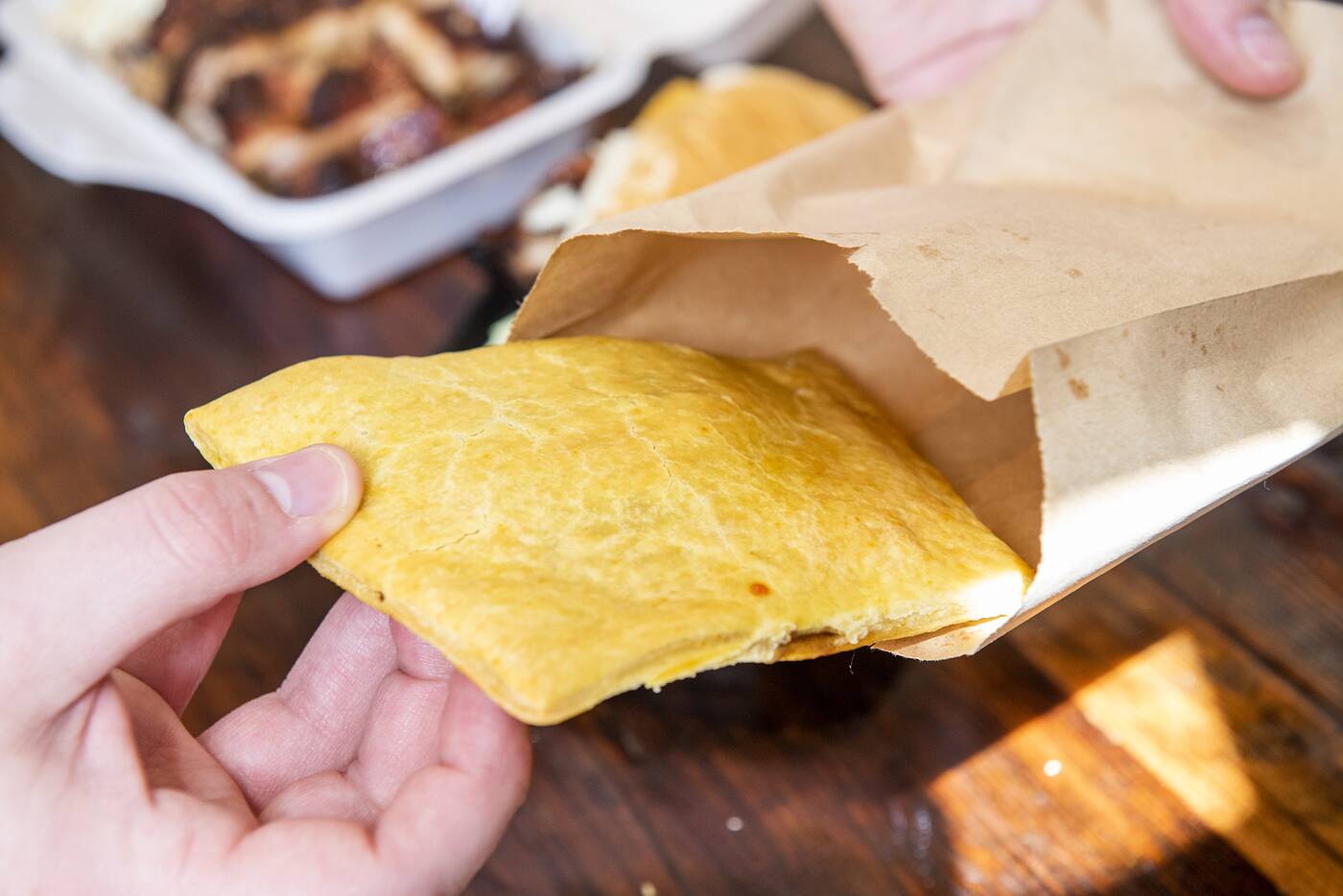 The patties at Allwyn's Bakery. Photo by Hector Vasquez.

"The Jamaican patty is an indicator of Toronto being a multicultural city," says Rowe.

"The patty is a snack, a meal, a friend," says Pham. "It knows no boundaries, no race, no class. It is forever giving. It is Toronto's official food."