Toronto has a new Jewish deli, but it's not your traditional counter selling chopped liver or kishka.

Dave's Genuine, run by Chef Dave Isen, is tiny. It operates out a 500-square-foot shared kitchen at 930 St. Clair Ave. West, and it's got less than 10 items on the menu. 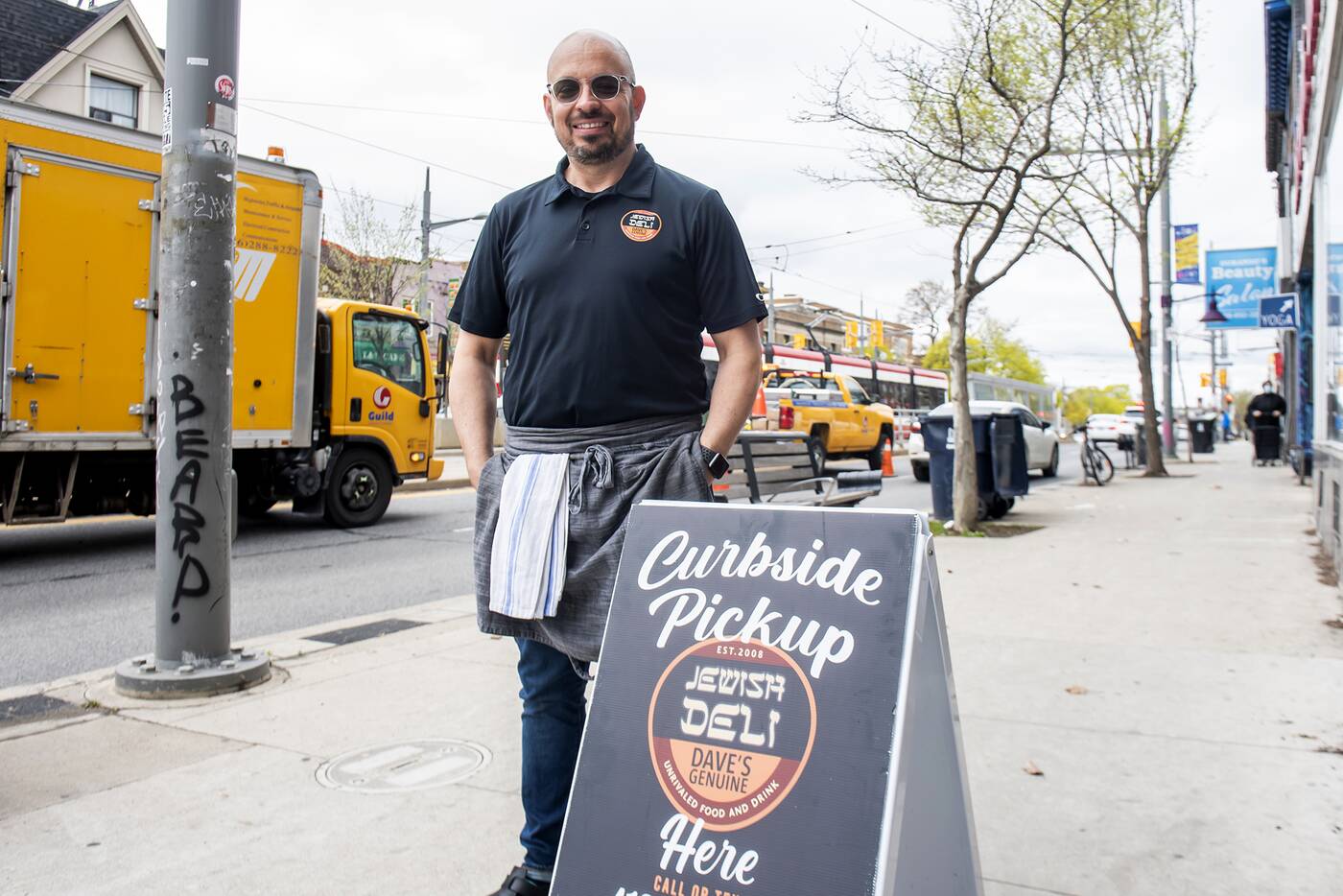 Toronto chef Dave Isen has been running curbside pickup for his deli since November.

You can't order over Dave's countertop like at a regular deli. The business only operates through delivery or arranged curbside pick-ups.

Plus the kitchen is located on the second floor, meaning Isen has to run down a flight of stairs to hand-deliver meals to his customers each time. 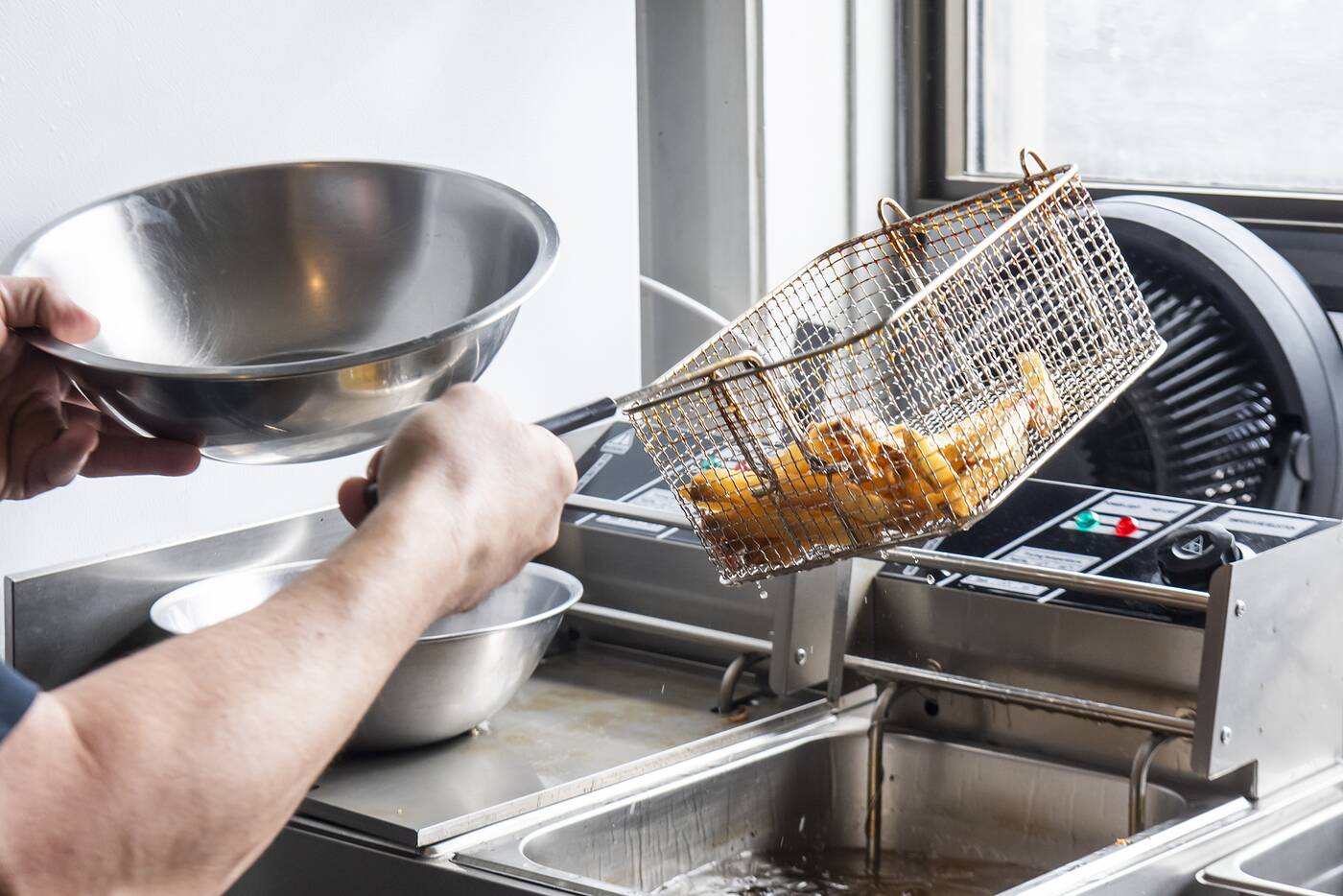 Isen is a former executive chef for Toronto restaurants like Brickworks Ciderhouse and e11even.

But Isen says, "The heart of the deli is the sandwiches." And in the case of this particular deli, it's enough to keep people coming back for more.

Dave's Genuine—a catering company and more recently, the addition of Dave's Genuine Jewish Deli—is a culinary egg that Isen's been sitting on for 13 years. 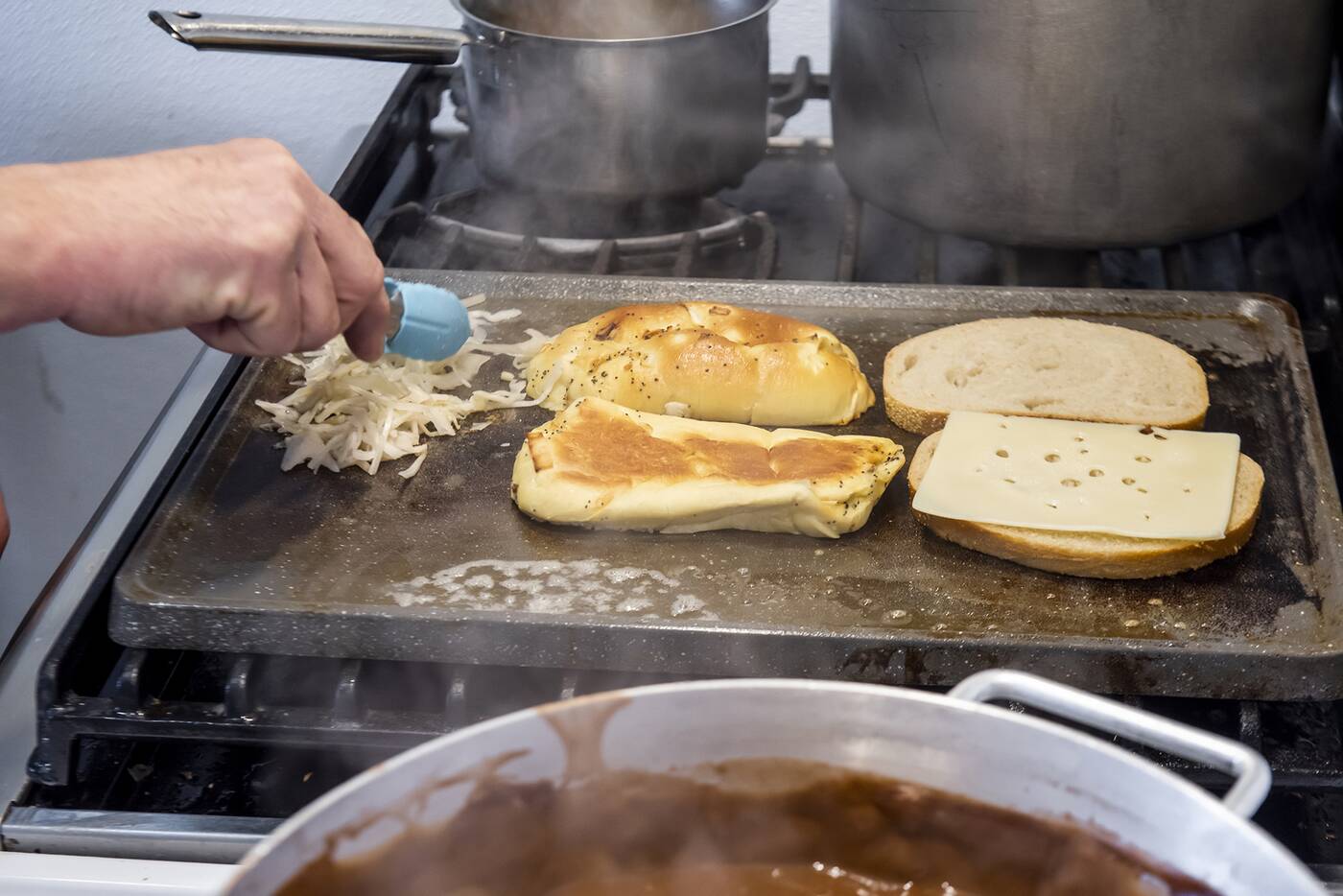 Dave's Genuine has a small but mighty menu of classic sandwiches.

As a former executive chef at Toronto restaurants like MLSE's e11even, Mill Street Brew Pub and Brickworks Ciderhouse, Isen says he registered his business in 2008 but never had enough time to fully concentrate on his own concept while working as a corporate chef.

But then COVID-19 hit. Isen says he wasn't able to return to his job at FAB Restaurant Concepts while looking after his then eight-year-old son. That ended up being the "silver lining" that's allowed him to dive into Dave's Genuine head-first. 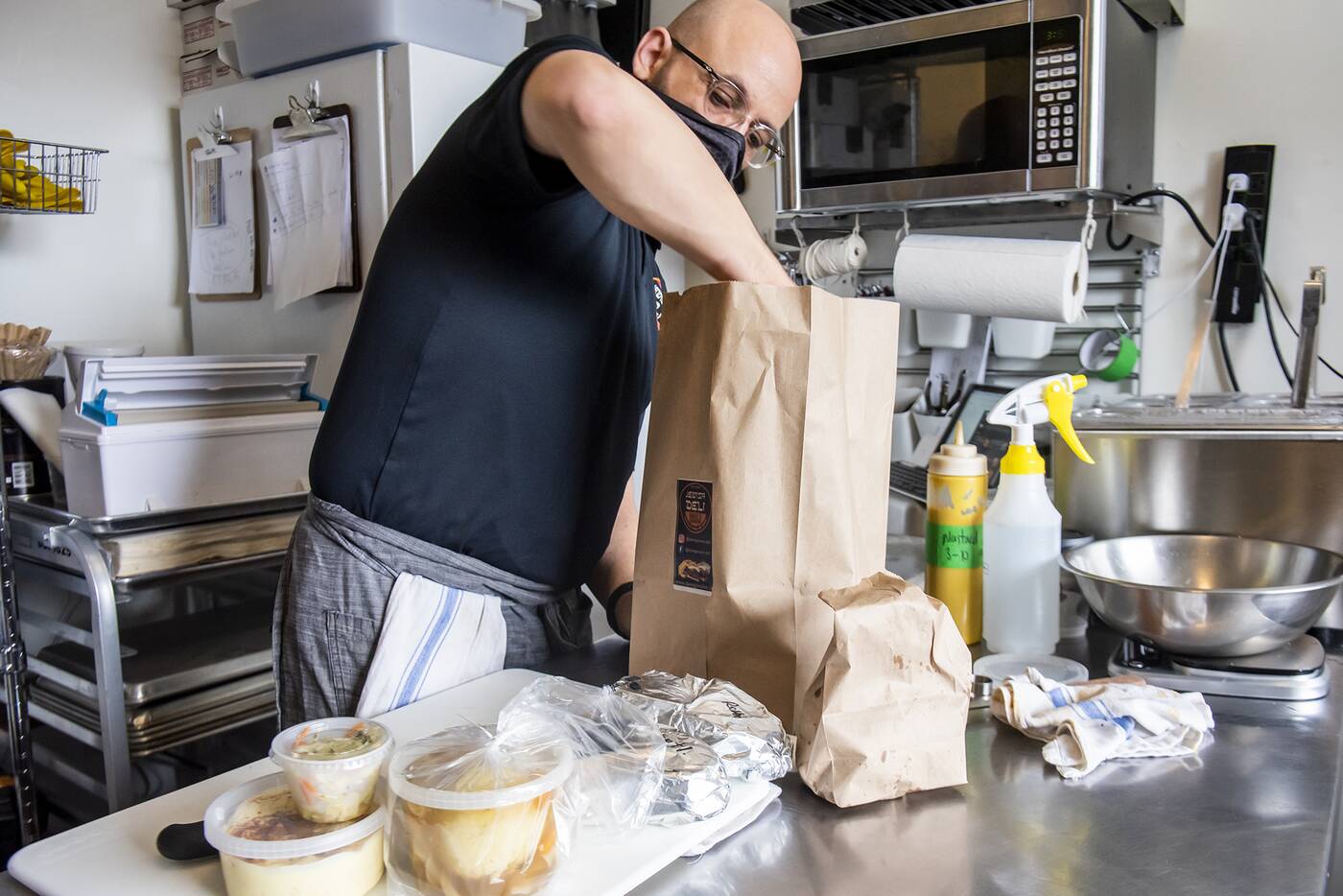 Isen runs his business out of a 500-square-foot shared kitchen on St. Clair West.

"The deli has always been a dream of mine," says Isen. He's aware of the delis that have come and gone over the years, and he wants to do his part to keep Toronto's deli scene alive.

Like many in the Jewish community who grew up in Thornhill, Isen cites institutions like Pancer's Original Deli, Bathurst's destination  for corned beef and pastrami, or the now-closed Chinese restaurant Sea-Hi, as cornerstones of his childhood diet. 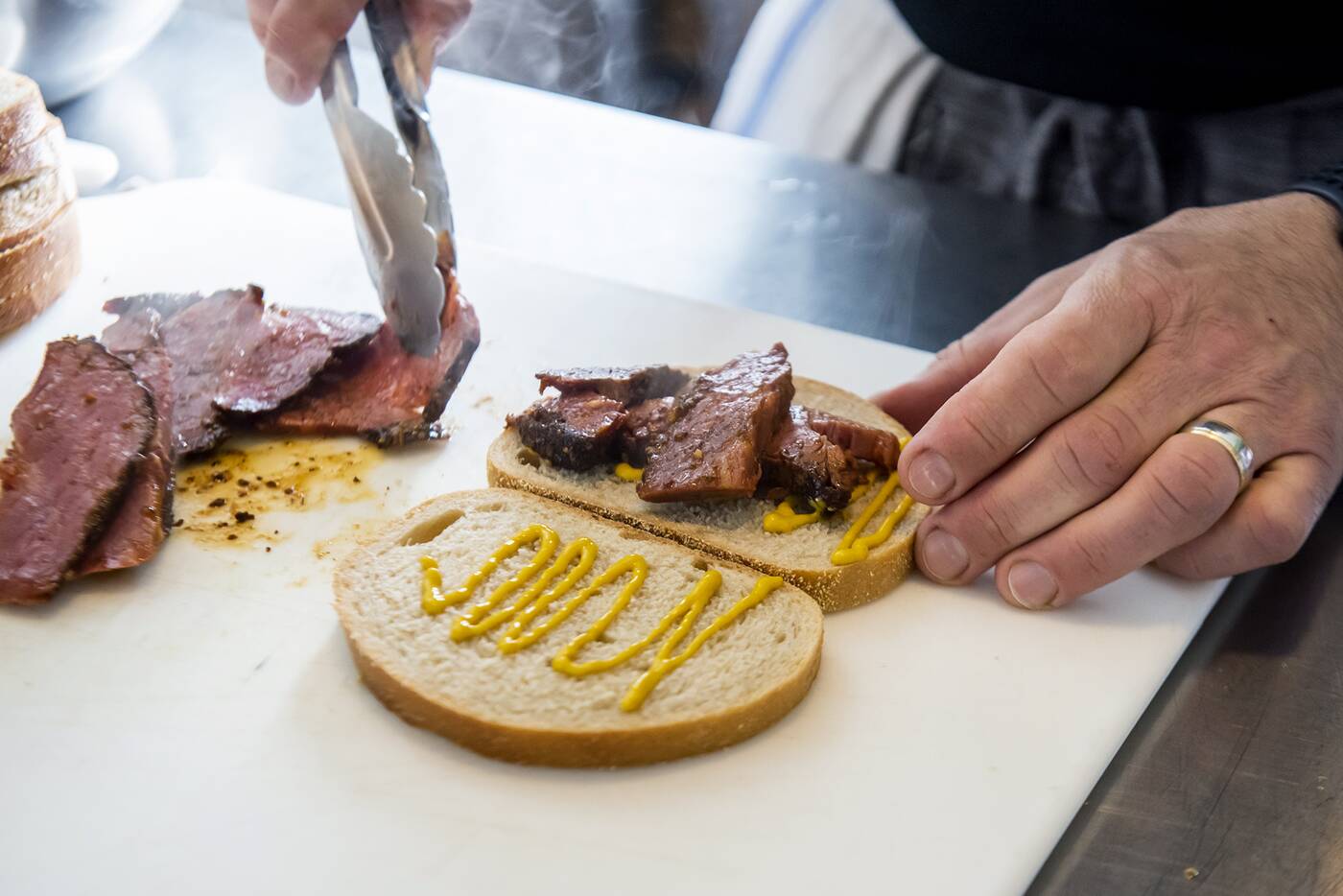 All meats used at the deli come from Nolan Angus farms.

At home, Isen often had matzo ball soups, knishes, briskets and other dishes that make up common Ashkenazi Jewish cuisine. But his love for deli meats really took off in the 1980s while working at, of all places, the Pickle Barrel in Promenade Mall.

Hard to believe it these days, but the fettuccine-slinging chain with 300 items on its menu first opened as an 85-seater deli on Leslie Street back in 1971. 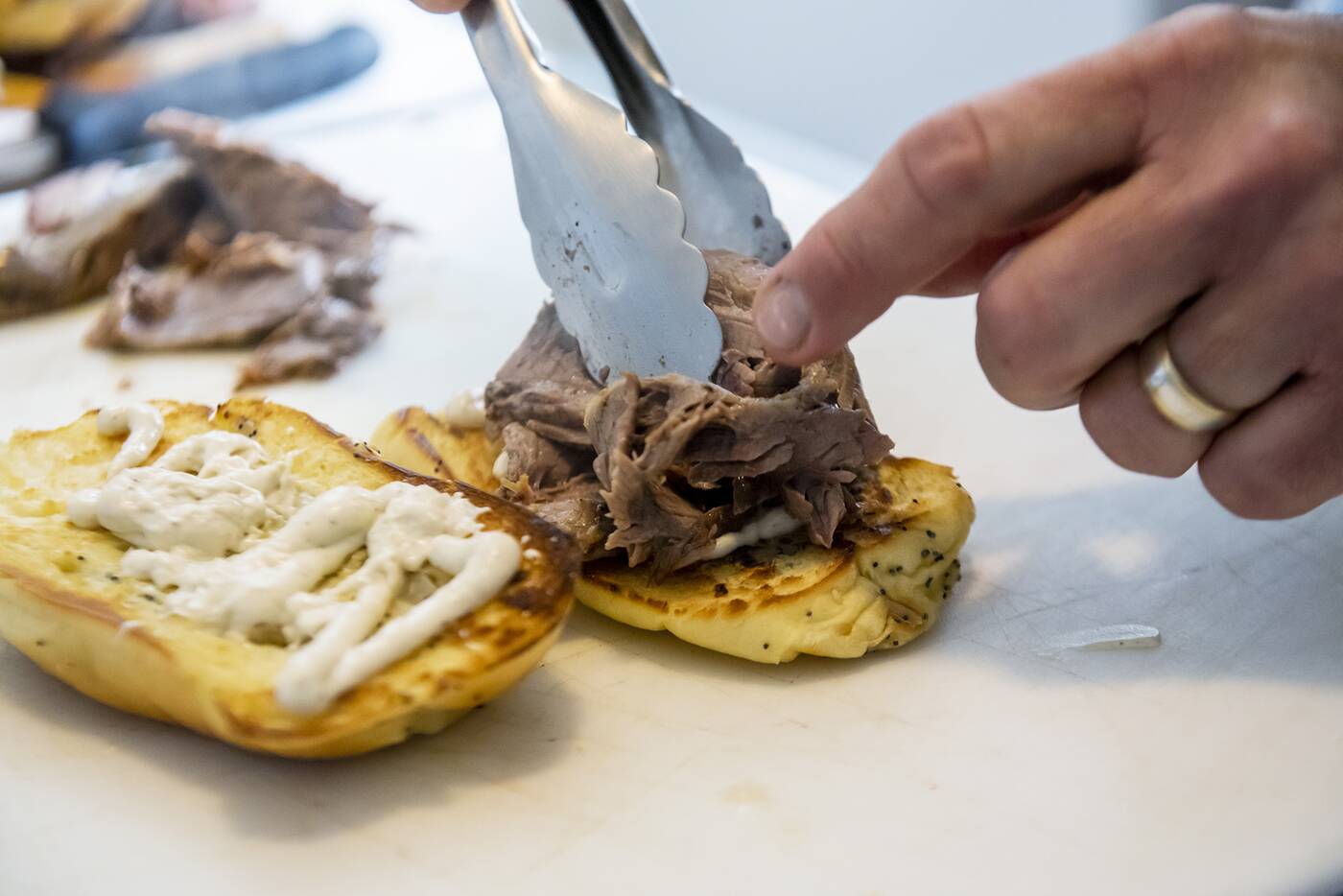 Meats are cured, smoked and hand-sliced in Dave's Genuine kitchen.

"I remember the pastramis coming out of the oven," says Isen. "My friends, we worked there together, and that was our heaven."

At Dave's Genuine, Isen is replicating that smokey experience with a mean and lean menu of staple sandwiches loaded with pastrami or Montreal-smoked meat from Nolan Angus Farms, cured, smoked and hand-sliced in-house. 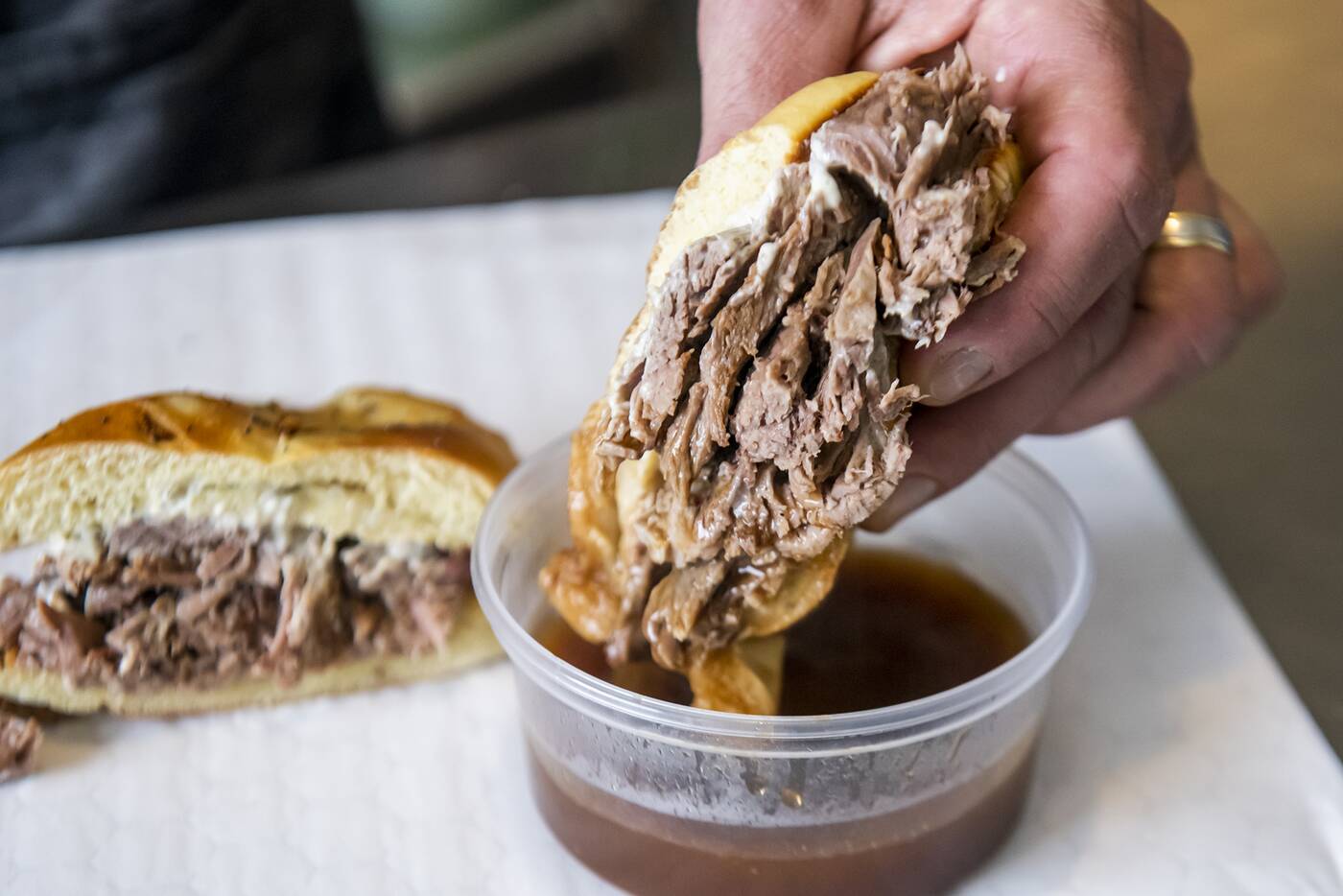 The popular roast beef dip comes with a side of jus.

The roast beef dip ($13.99) comes on onion rolls from the Sheppard Avenue bakery Bagels Plus. Seven ounces of tender, slow-cooked brisket is served with jus and a creamy horseradish that's made in-house. 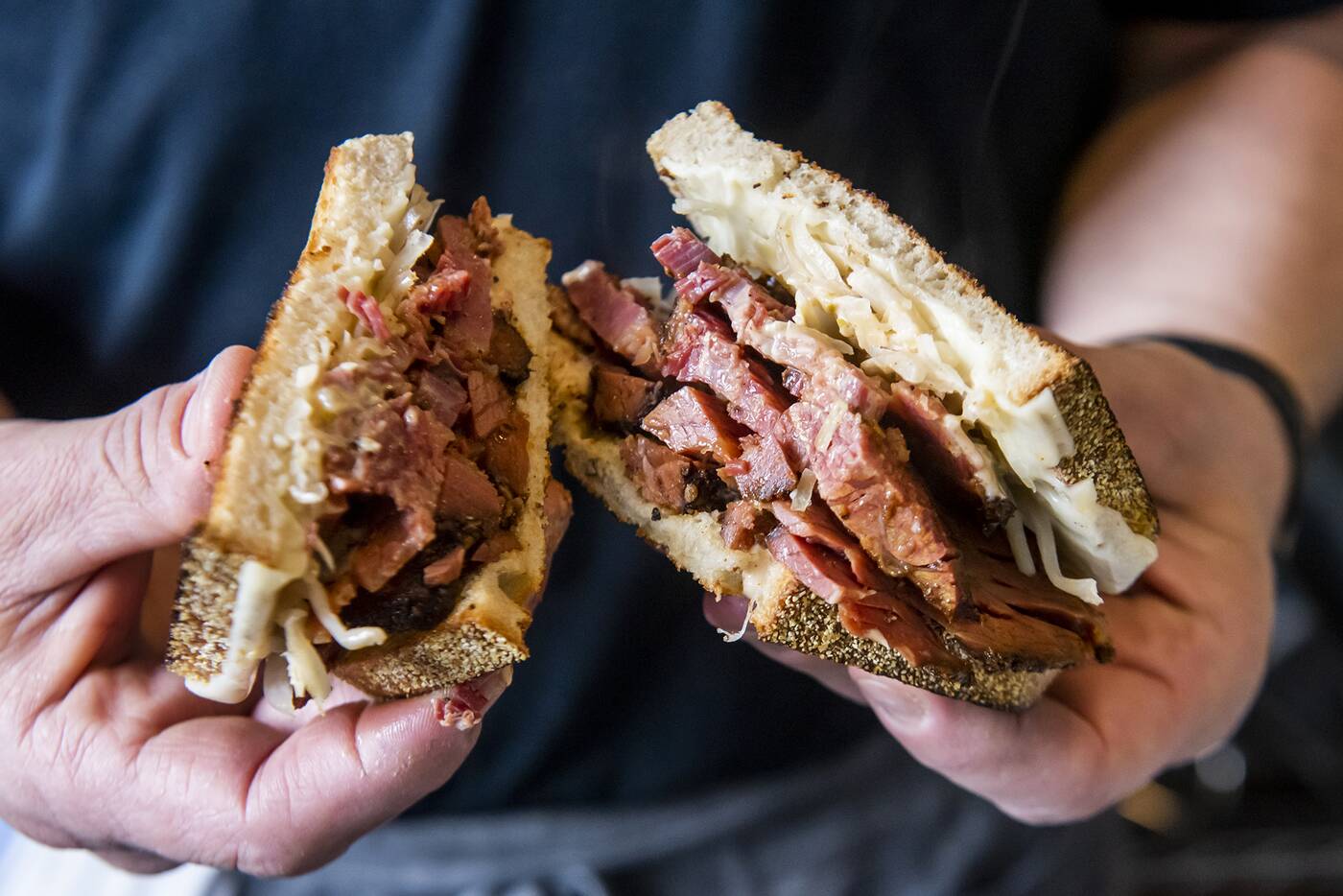 The Reuben comes on rye with sauerkraut, swiss cheese and Russian dressing.

Naturally fermented sauerkraut from Hamilton-based company Marty's Pickles shines in every way, either in the sandwich or on the side. The speared dill pickles (which you can buy by the piece for $1.49) are just as good.

The massive matzo ball is more like a boulder of matzo meal, sitting comfortably in a homey soup made from slow-cooked roasted bones. 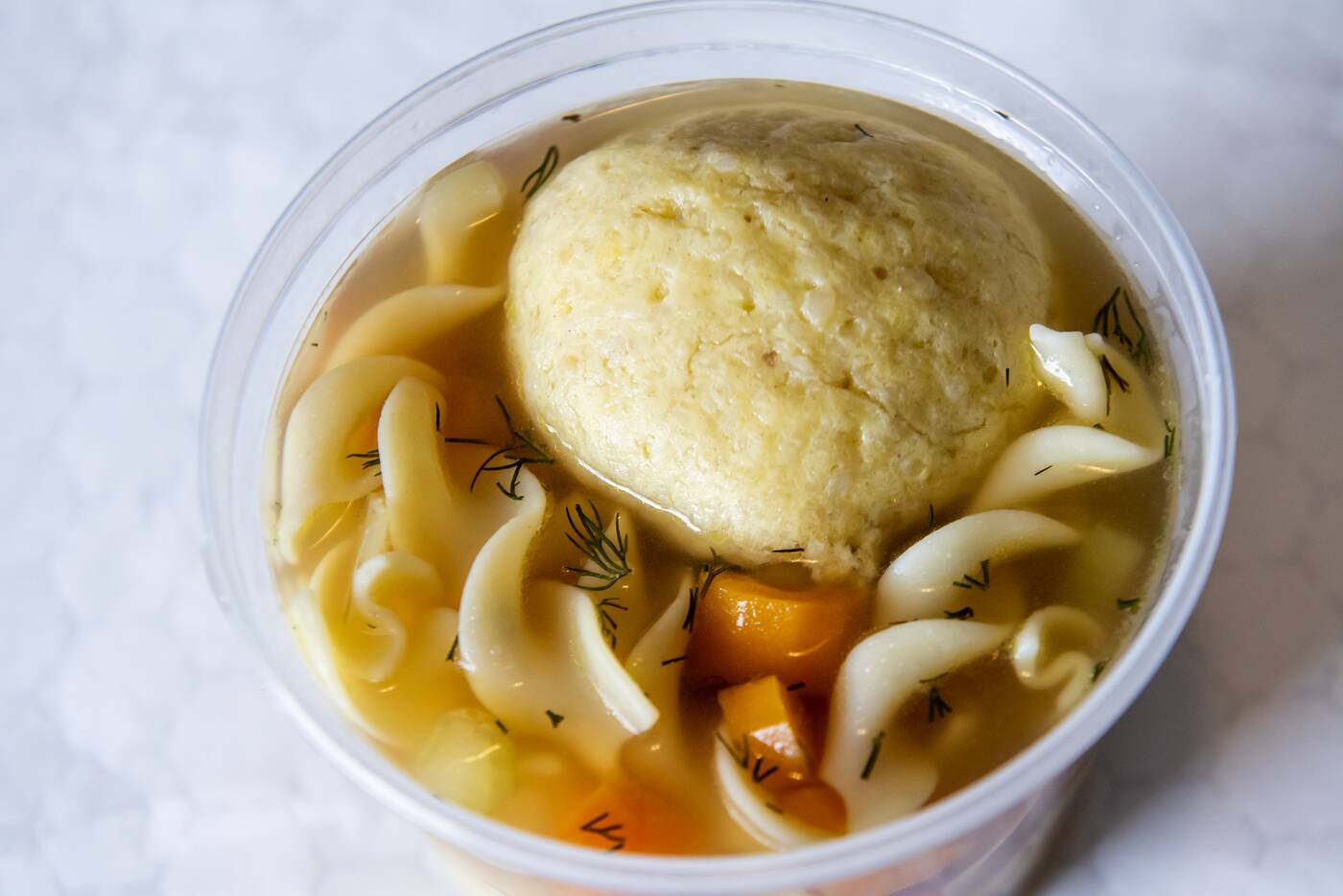 The matzo ball is massive. It comes with egg noodles, carrots, and celery.

Salty hand-cut fries complete the equation of mustardy, vinegary flavours. Rice pudding with cinammon is for dessert (though you can also get a Jos. Louis on the side).

Isen says Dave's Genuine has been described as "Jewish-ish" by customers—as in, they're not seeing the traditional variety you'd find at Pancer's, which is bigger than 500 square feet.

But if you're ordering a sandwich from Dave's, you can expect Isen to be downstairs handing a Reuben to you within three minutes. A bit longer, if you want fries. The speediness is an essential component of the deli experience that's not missing here. 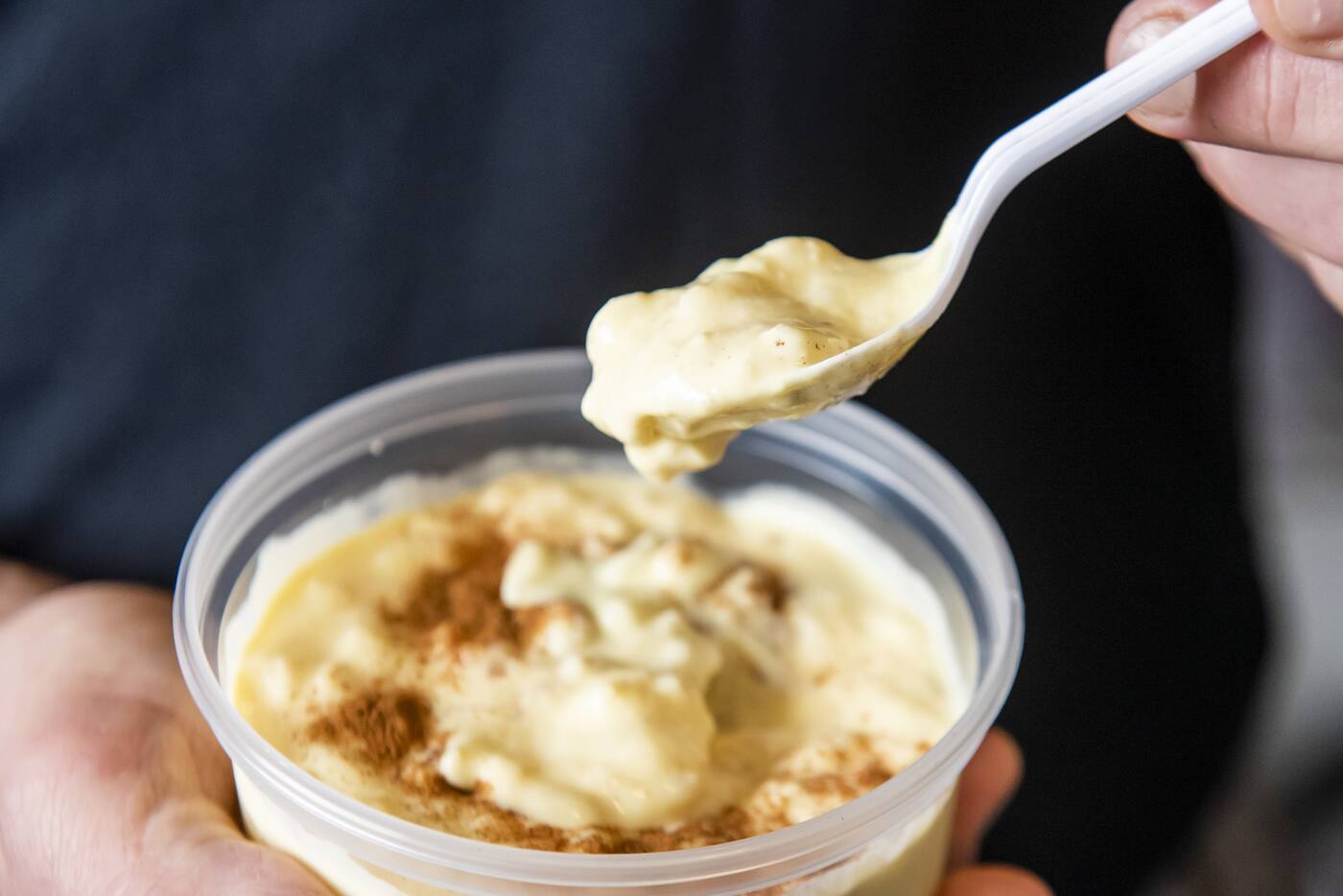 The plan is to open his own storefront down the road, which will opt out of the notoriously flippant customer service Isen says is usually found behind deli counters with something "in between."

"The food is number one. It’s not the healthiest of meals, it’s an indulgent experience. It’s something you crave," says Isen. "It’s something you need right away. When I have smoked meat on my mind, I need it right now."