My first visit to the Mill Street Brew Pub was two springs ago to meet up with a friend who was even more unfamiliar with Toronto than I was at the time. It was back when the words Distillery District , organic beer, and Mill St. held little meaning or understanding. But as I ordered my glass of said organic beer sitting outside on a patio, both surveying the stonework setting and eyeing the impressive looking eggplant-parm sandwich being mowed down before me, I vowed to come back.

Since then I have been back, but mainly because it's the only option if you want other than coffee shop or bistro-glam in the Distillery. The Mill Street Brew Pub is a corporate-styled gastro pub safe bet type: exposed brick, black swathed staff and sometimes kilts, a menu that's just a tad more upscale in price and offerings.

It's tourist friendly pub food with lots of hand-held options for mid level professionals who like watching the food network and eating without cutlery. Of the sandwiches we tried, none were remarkable. The steak and gouda wrap ($9.99) at a bite tasted of juicy, smoked from the grill meat in a crisped shell, however, it was reported later to rapidly decline into soggy disarray. It also could have used more cheese. The lamb burger ($9.99) deemed dry, also disappointed with a skimpy more - for show than taste - topping of feta. The prime rib burger ($12.99) was judged as"surprisingly good". I found the pulled pork sandwich ($11.99) satisfactory. The pliant pork was deeply infused with a fragrant barbecue sauce singing of apricot and well matched with a soft, eggy onion roll, but again, the cheddar served atop was strangely imperceptible.

The cheese in the appetizers fared much better. The stilton in the spinach, artichoke and stilton dip ($9.99) was completely over-powering; in a good way as I'm a huge fan of brazen blues. The decorative salt on the pretzel bread alongside was cute, but overkill. Creamy dollops of mild goat cheese in the strawberry spinach salad ($12.99) perfectly offset the dessert-quality candied almonds and ripe fruit.

We also had the soy and ginger wings ($10.99/2lb) which I thought were just ok - a bit over cooked with sauce that wasn't quite lick your fingers good - even though everyone else seemed exclaimed otherwise. The steak and stilton pie ($11.99) was quite nice: buttery crumbly crust and not too stringy meat in a robust gravy with a depth of their coffee porter brew. It was sided with textbook mash and pleasantly sweet peas without a whit of mush.

Although not on my list of wow-worthy hits, I'm sure I'll be there again, and many times more if only for a sunny seat outdoors and an icy pint of that Belgian Wit beer I'm currently obsessed with. 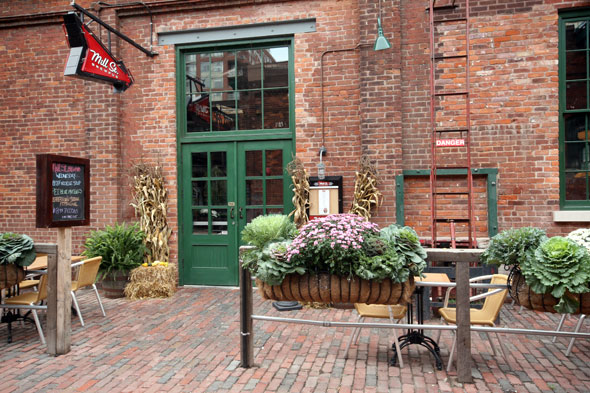