One of Toronto's most famous restaurants just opened a second location

After more than three decades, Toronto's king of quick and delicious Thai has arrived on Queen.

Salad King's new location has officially opened on the corner Queen and McCaul, transforming what used to be a Captain's Boil into a new outpost for the beloved restaurant whose 30-year lore includes a five-alarm fire, a crumbling wall, and feeding countless Ryerson students on a budget, myself included. 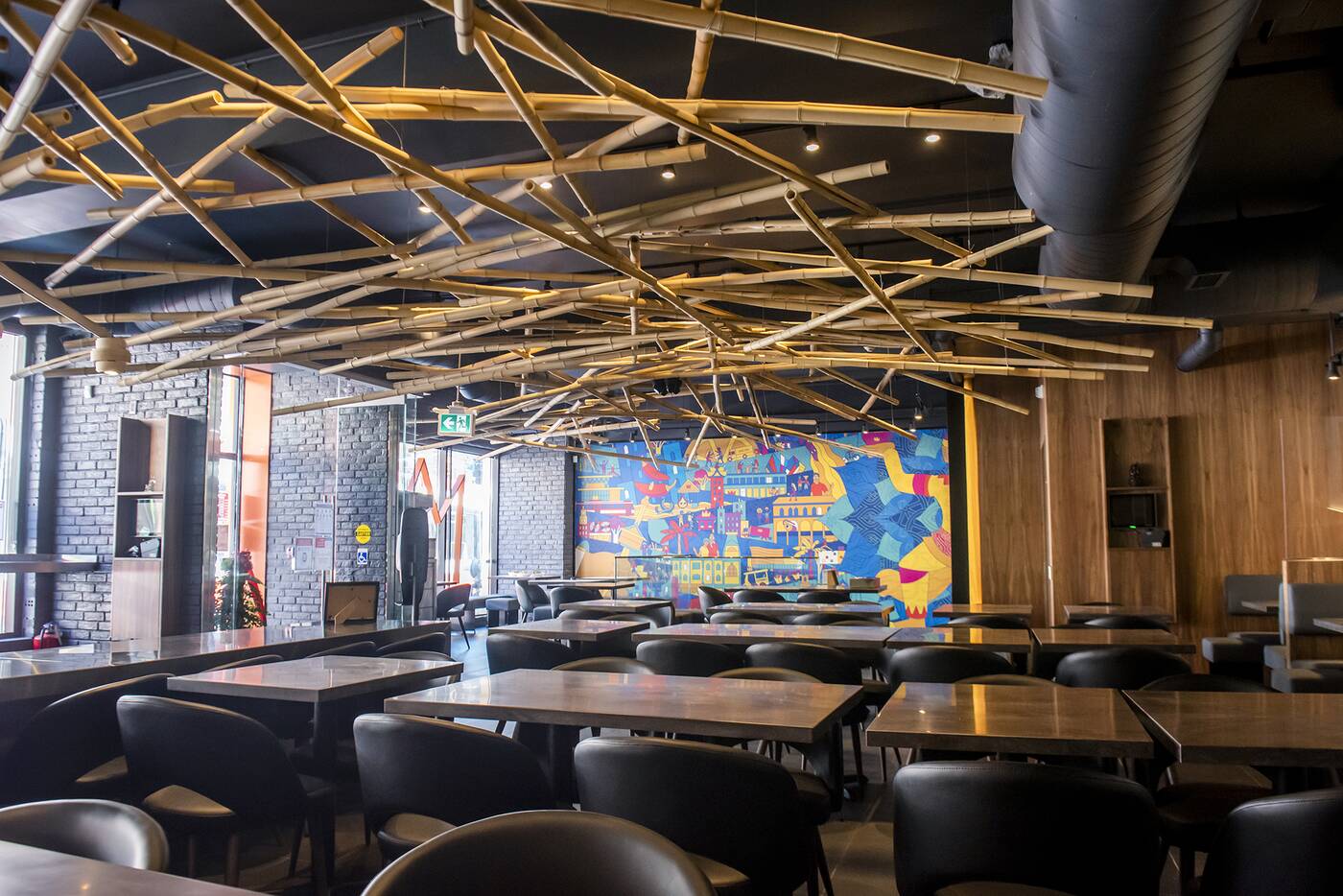 Owner Alan Liu, whose parents Ernest and Linda first made a name for the restaurant in the 90s, has a vision for the new location: "Salad King, but more grown up."

That doesn't mean pricier nor fancier. Adulting here looks like chairs with backing, as opposed to the communal-style benches at Yonge Street, and a kitchen designed for flexibility as opposed to the speed required to feed 170 people at one time. 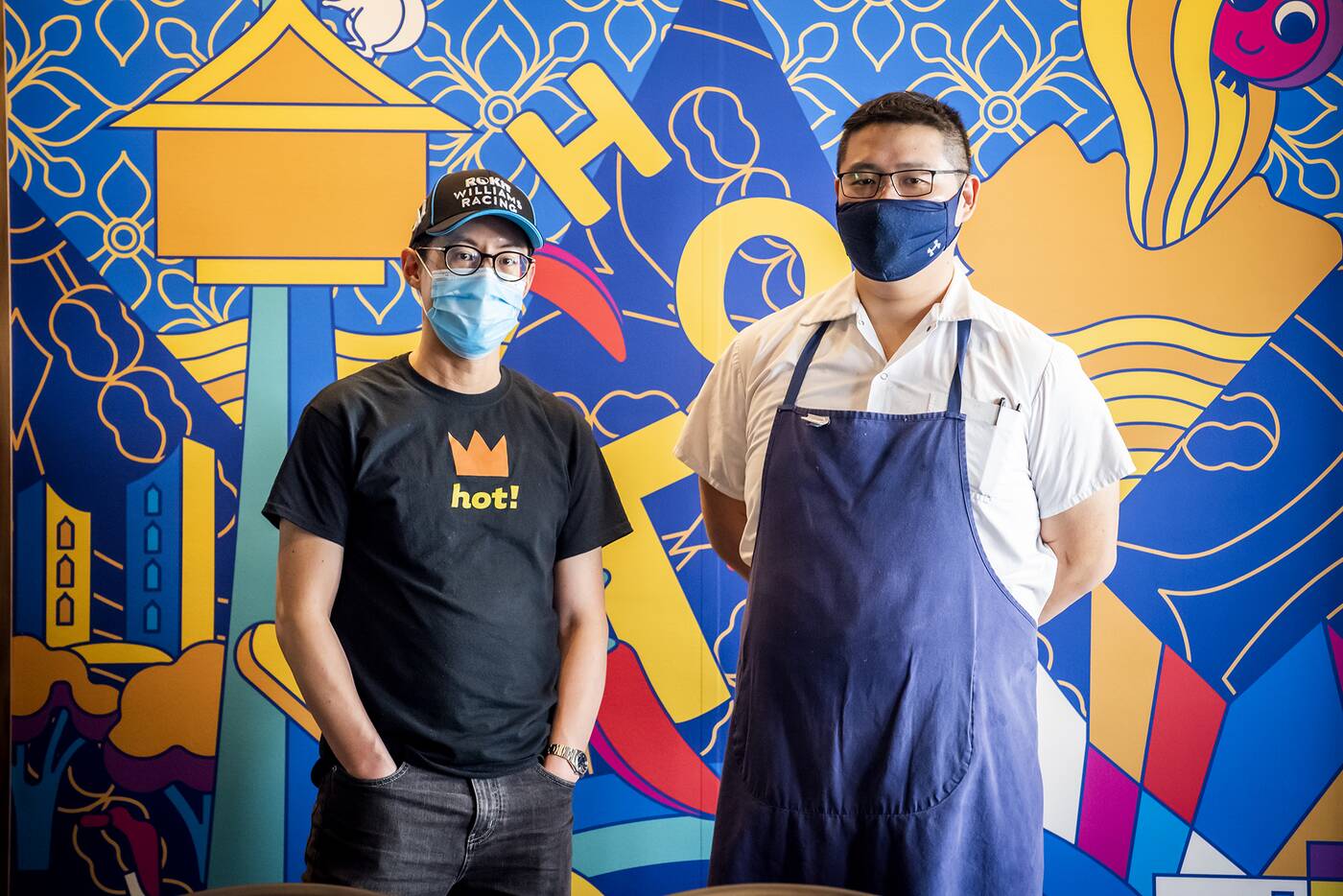 Owner Alan Liu (left) and Chef Chris Jang are hoping to attract loyal and new customers with this second location.

Liu acknowledges that dining out is incredibly costly, so prices at this slightly smaller operation—3,000 square feet compared to Yonge Street's 4,000-square-footer—are exactly the same. In fact the entire menu is identical to its original.

"[Dining out] is a luxury. It's a lot of money for a lot of people," says Liu. "We don't want to rack up our prices willy nilly." 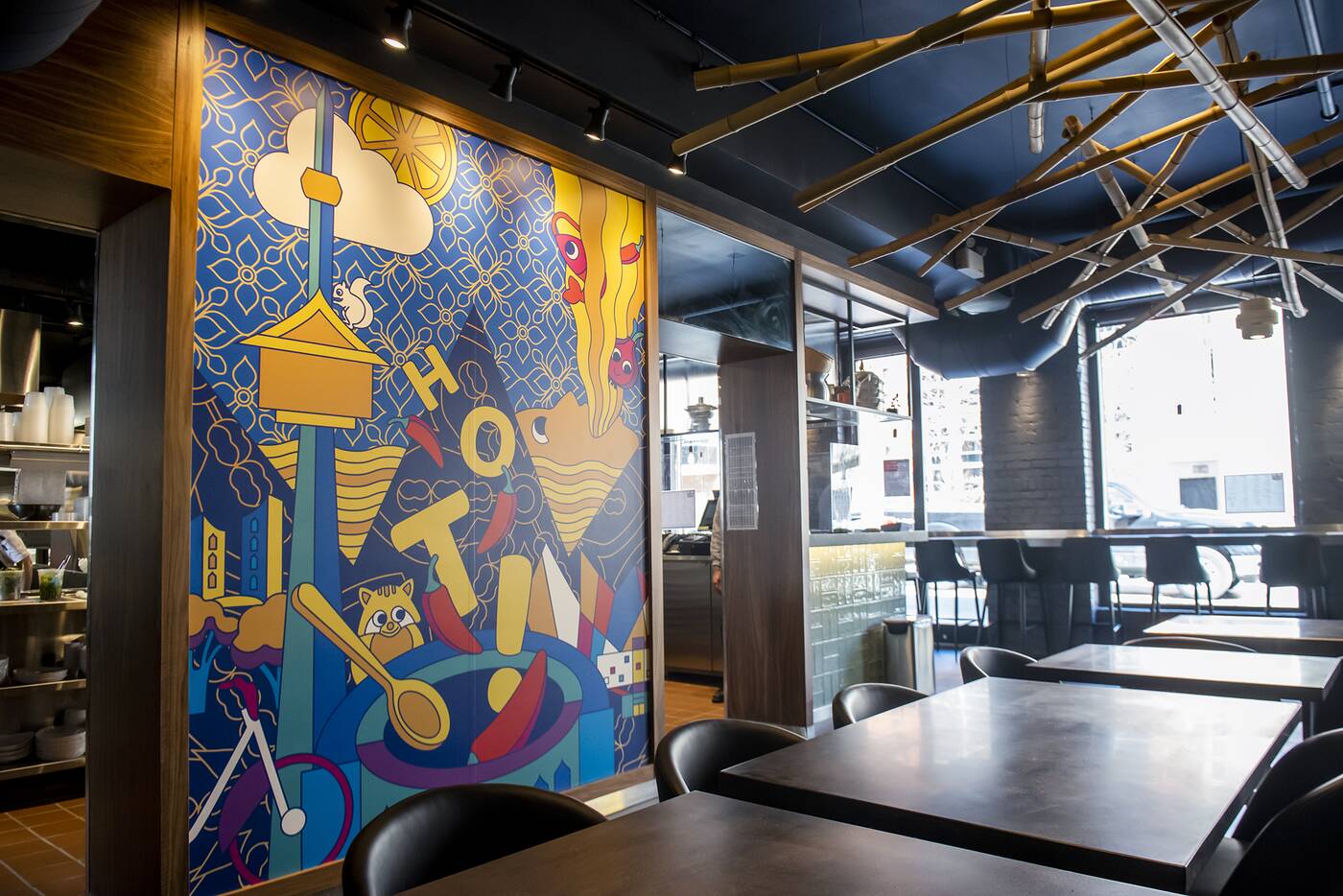 The restaurant is slightly smaller than the original, seating 100 instead of 170.

When Ernie Liu and Linda Fung moved from Hong Kong and first took over the original Salad King in 1991, it had been a literal salad bar operating on Gould Street in the heritage Empress Hotel building for nearly a decade.

A trio of entrepreneurs hailing from the Golden Triangle bought Salad King in the late 1980s, nudging a few Thai dishes onto a menu populated with ham burgers and Peameal bacon sandwiches. 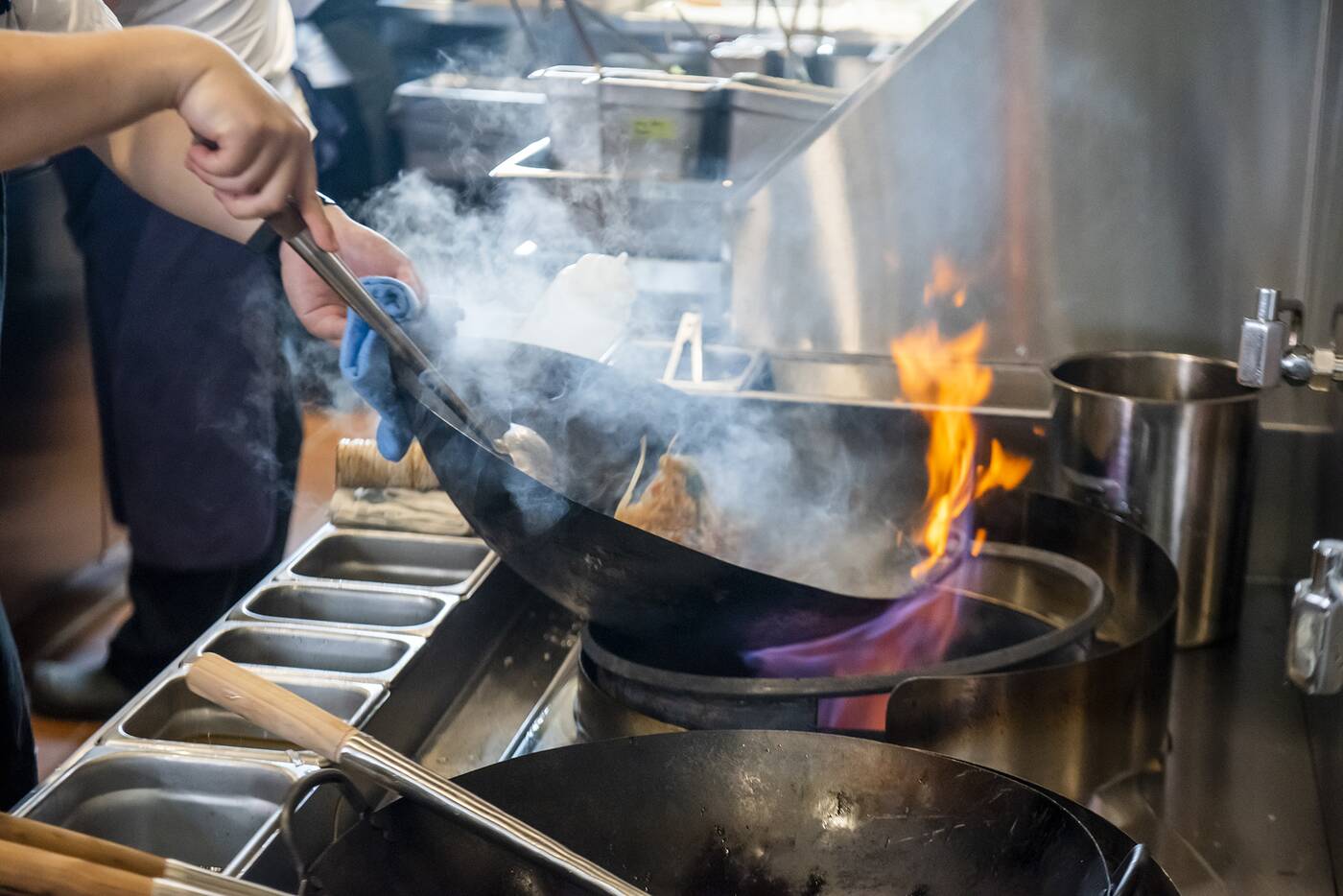 The Liu family first took over the original Salad King in 1991, turning it into a restaurant of mostly Thai food.

A few years later, Liu and Fung arrived. The first-time restaurant owners painted the walls pink and upgraded the menu, and by the late 90s had ditched the fusion Canadian food and fully committed to pad thai and curries, hiring a Thai chef to bring the menu to life.

They've kept some Chinese Canadian dishes on the menu as an ode to that era, like a chicken ball fried rice dish and 10-chili Orange Beef. 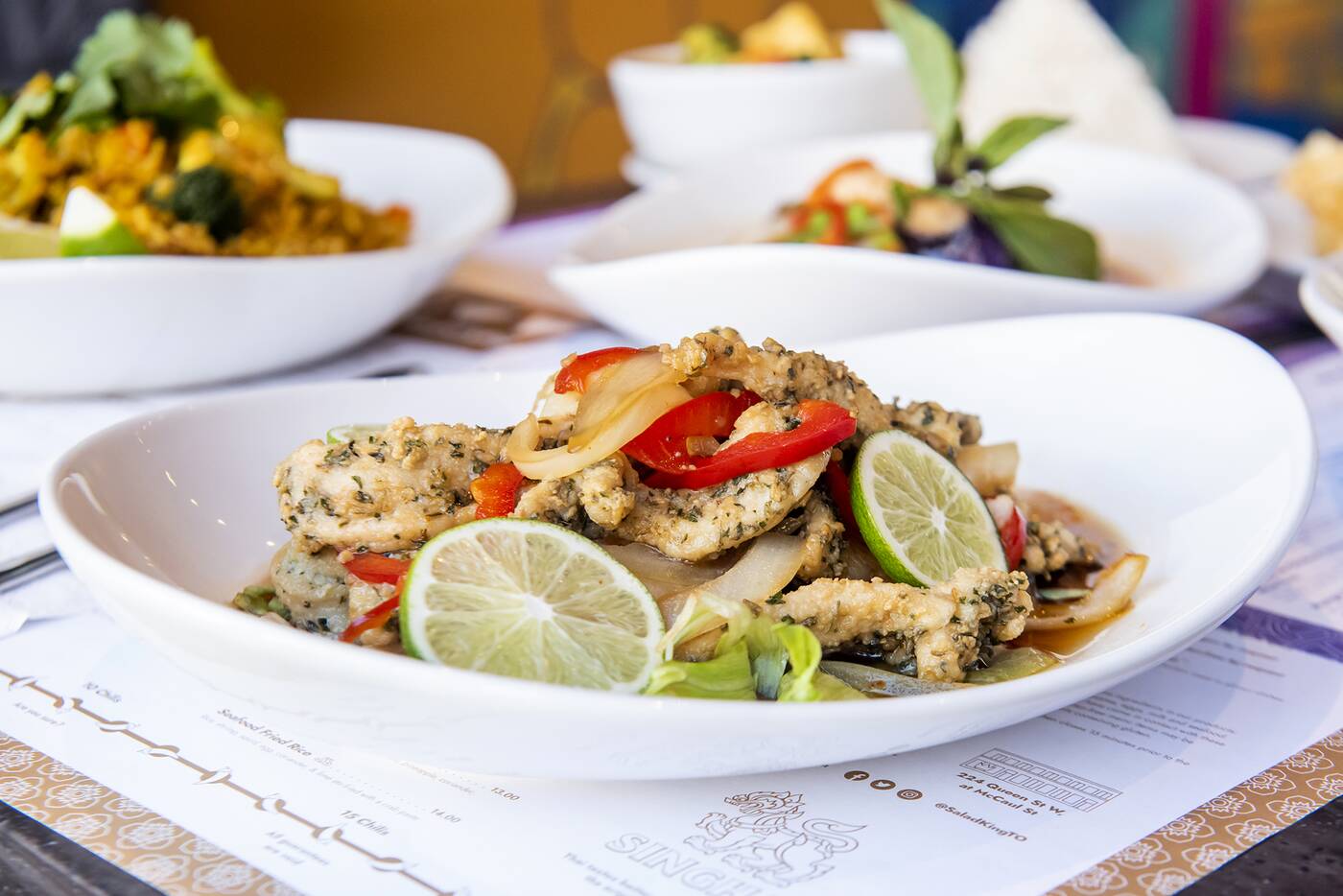 The menu has remained largely the same since the 2000s, with some carrying through from the 1990s.

The legacy of those dishes and the rest of Salad King's resilient menu have persisted despite a wall collapse in 2010, and, a few months later, an arsonist who managed to set the entire Empress Hotel building on fire, forcing Salad King to move above Foot Locker at 340 Yonge St.

It was during the Gould Street days that the Liu family launched a fancier Thai restaurant called Linda Modern Thai above Salad King. It eventually moved to Shops at Don Mills before shuttering for good after 15 years. 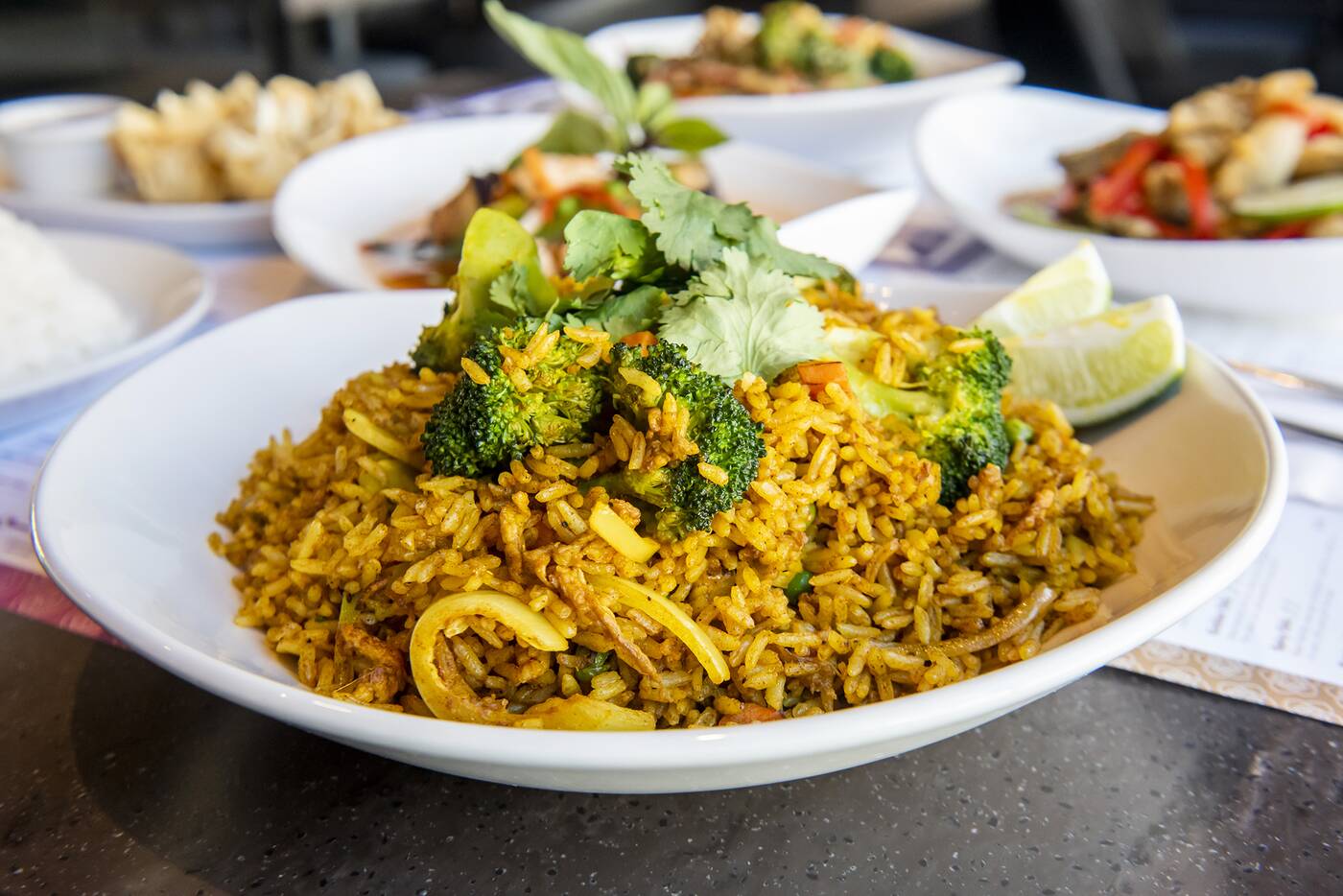 Dishes like the a beef stir-fried rice can be ordered at different spice levels, indicated by Salad King's signature chili spice system.

Salad King is an easy brand to stay loyal to for that very reason. There are more than a handful of menu items that have history spanning decades, growing up and evolving alongside its customer base. 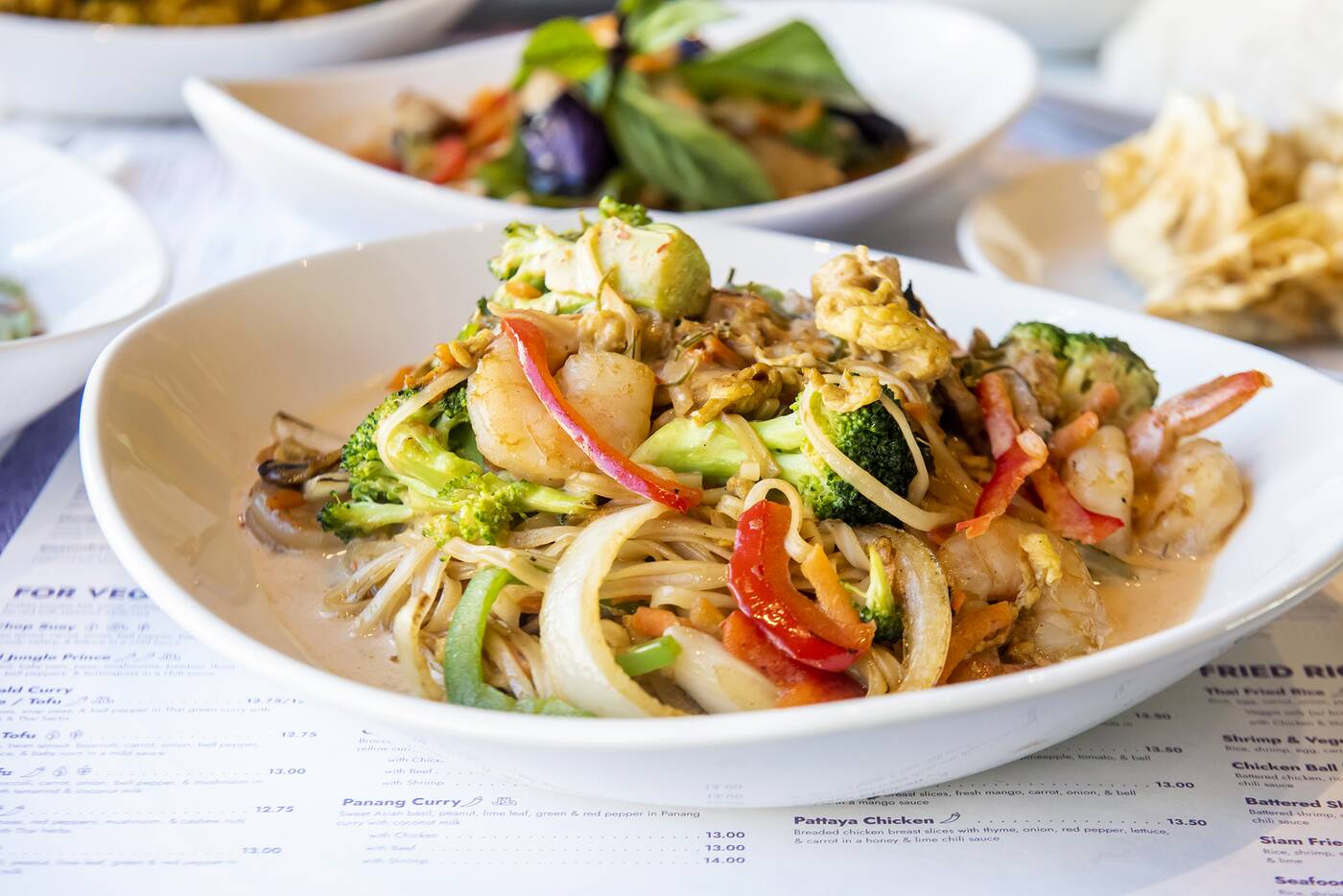 The Thai Islamic Noodle is an off-menu item and one of the restaurant's most popular dishes.

Few dishes are more legendary than the famous off-menu Thai Islamic Noodle, a stir fry rice noodle covered in creamy Panang curry, and their most expensive at $15.

According to Liu, the dish was originally offered in the 1990s as a daily special. They eventually discontinued the special, but the Islamic Noodle had become so popular that customers kept requesting it. 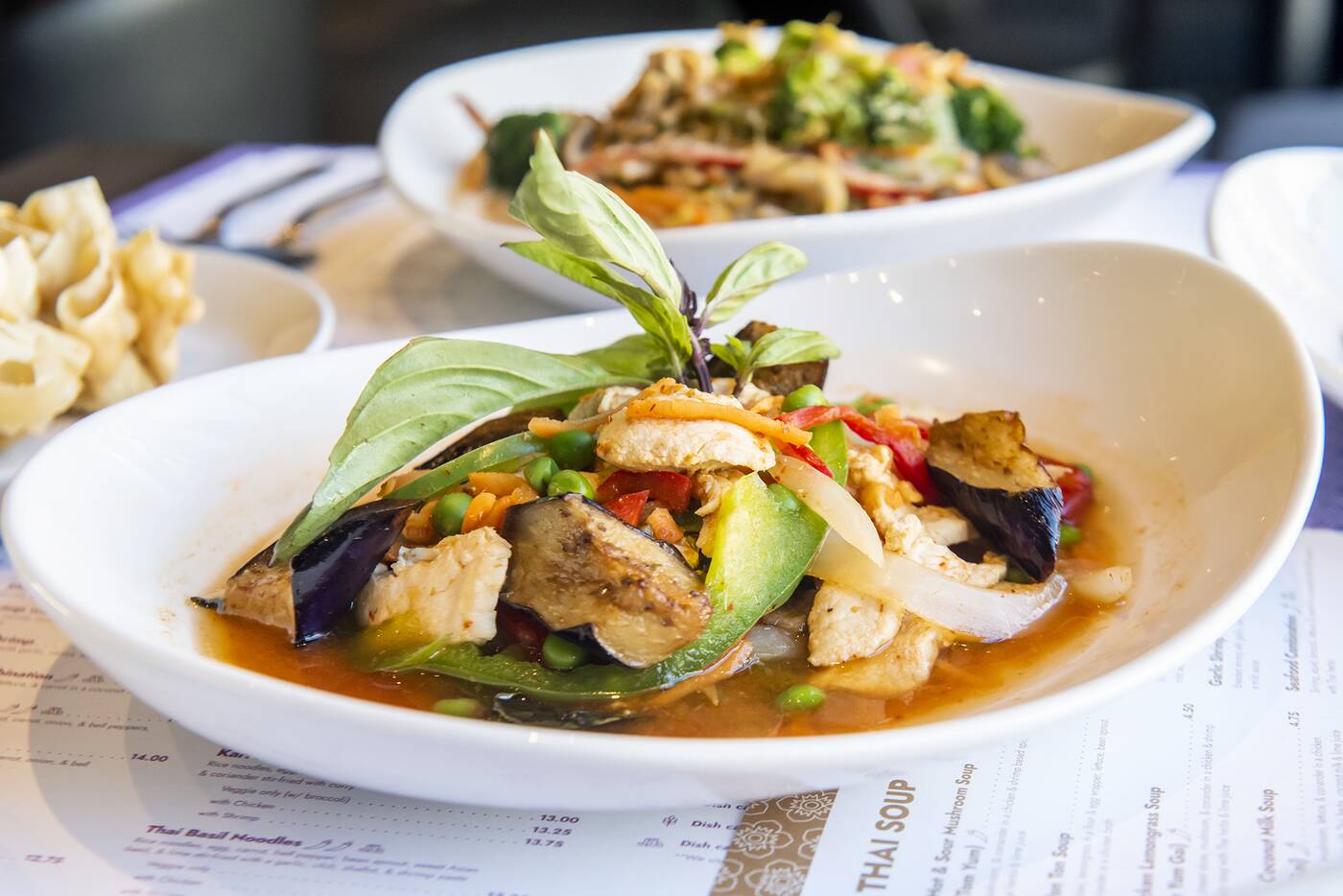 The menu on Queen is exactly the same as Salad King on Yonge, but will see some additions in the near future.

But Salad King already had a massive menu of permanent dishes printed and formatted. "My dad couldn't figure out how to change the layout of the menu," says Liu. So the dish never made it to the spread and ended up becoming Salad King's worst-kept secret. 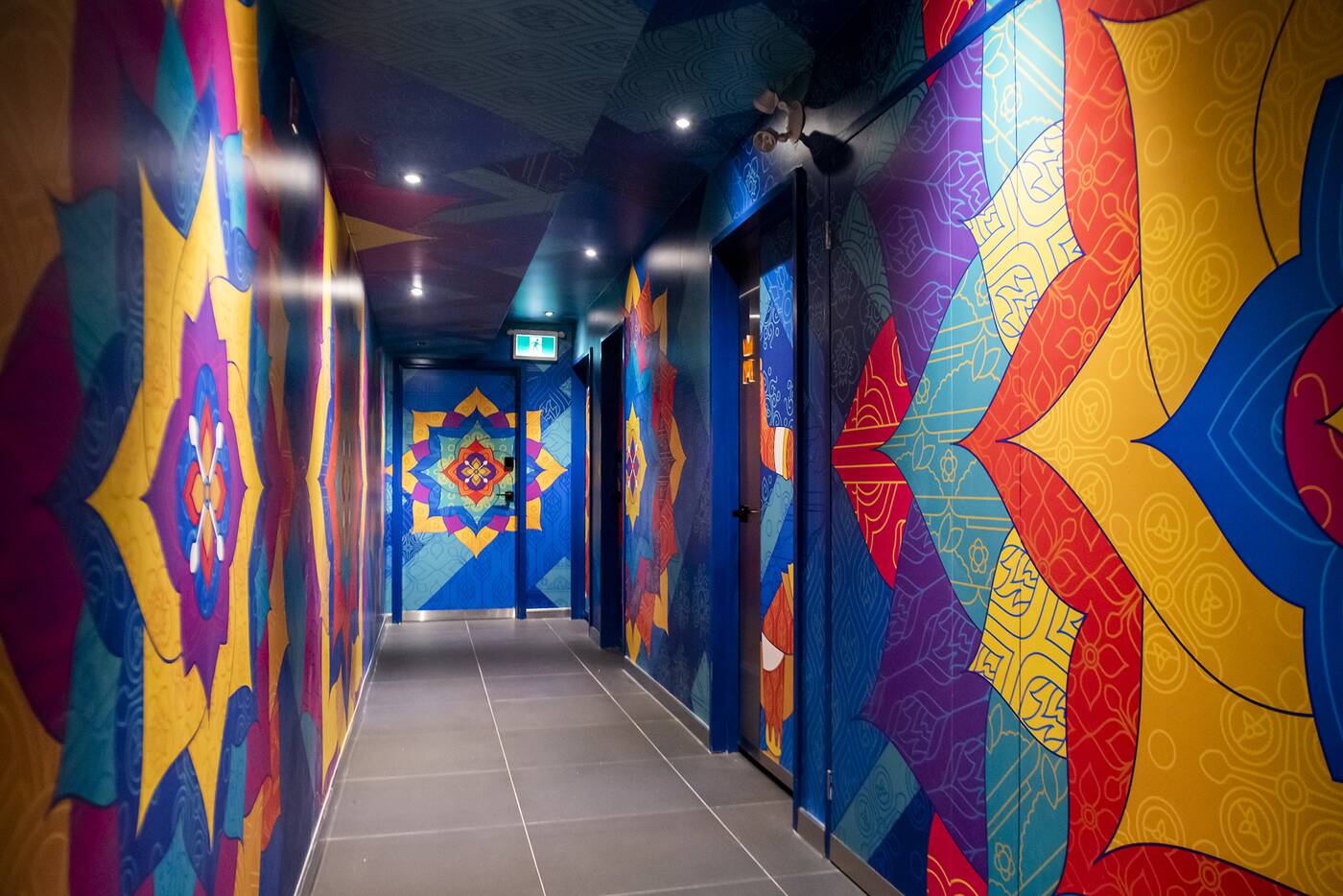 After years, Liu, who took over the business from his parents sortly after the fire, decided it was finally time to try a second location. Its initial September 2020 opening was delayed by months thanks to COVID-19. He's hoping Queen Street will give the brand a "fresh start."

"If you don’t keep moving forward you’ll start sliding back," he says. 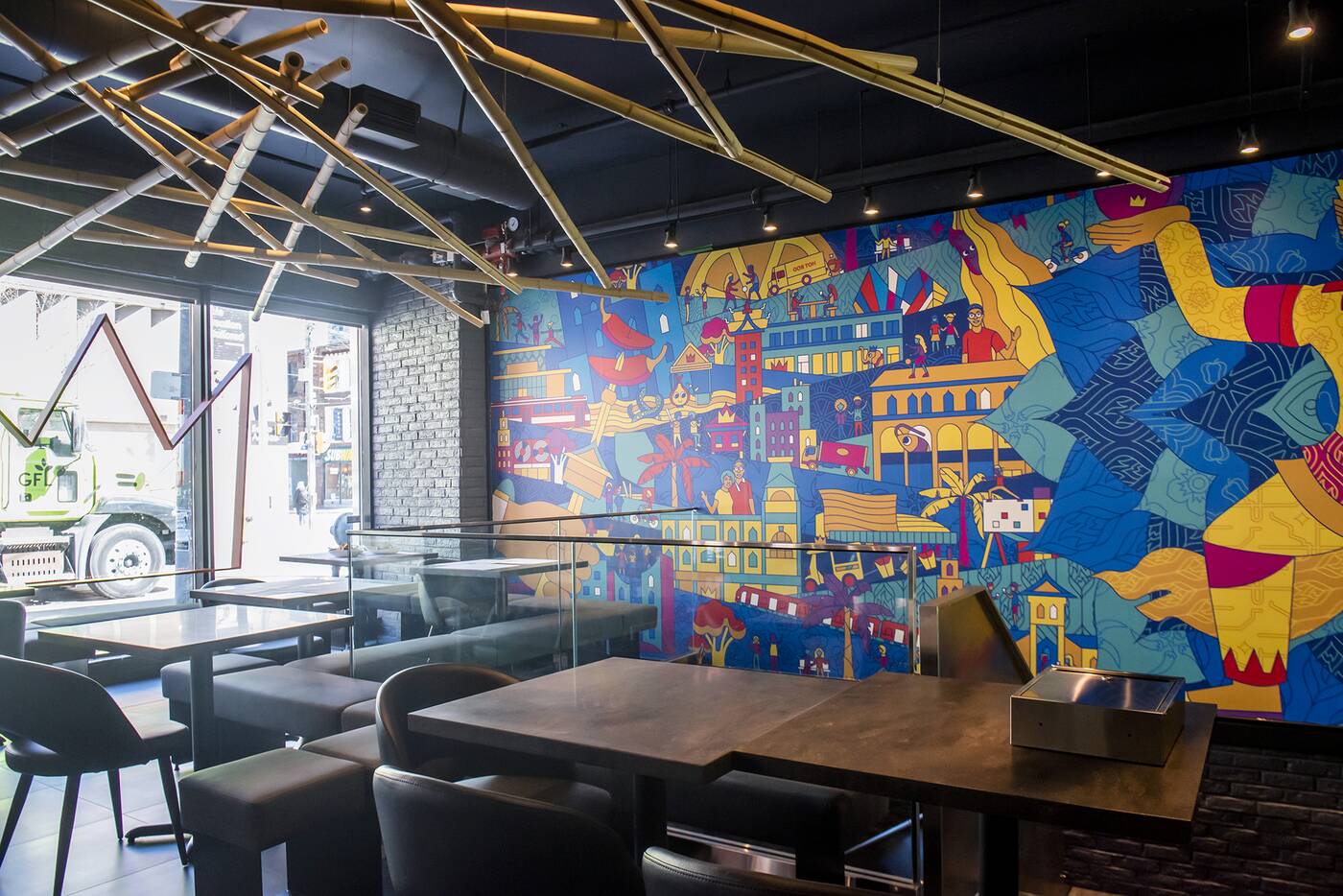 The southern wall of the restaurant is an intricate mural showcasing Salad King's 30-year timeline.

The new restaurant features wall art that's equally as loud and bright as the Yonge location, both by interior designer Sai Leung, who ate at Salad King as a Ryerson student back in the day.

It doesn't have the bright mandalas or the giant buddhas, but Salad King on Queen does have an equally loud mural by Office Bureau that showcases the restaurant's timeline, from Sam The Record Man signs to a small portrait of Ernie and Linda. The crown logo, which has been around since 1999, is still front and center. 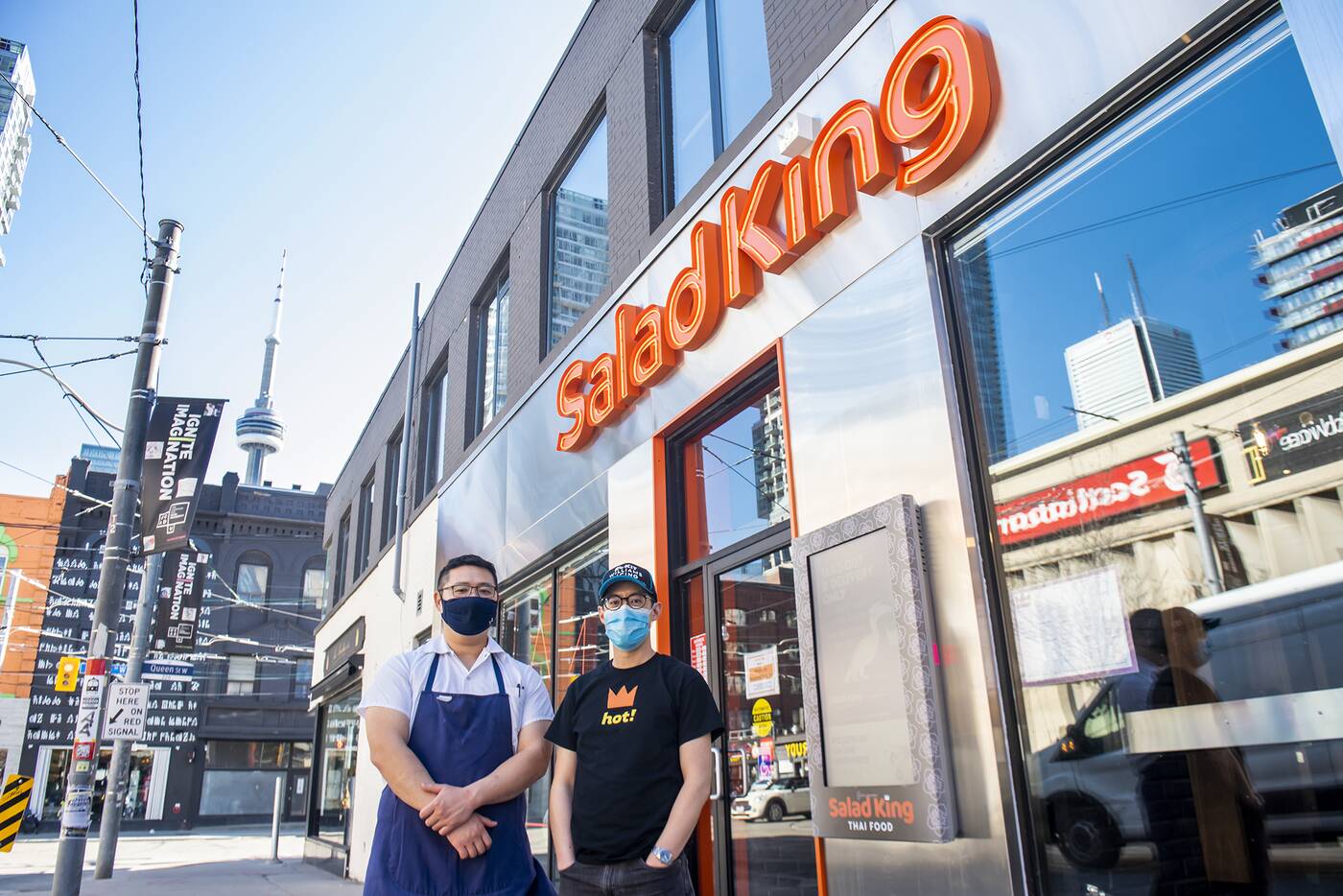