The history of Knob Hill Farms in Toronto

The lasting legacy of Knob Hill Farms might be their popular shopping laundry baskets, but they deserve more recognition for pioneering the very first big-box stores to Toronto.

Created in 1951 by Macedonian immigrant Steve Stavro, Knob Hills Farms got its name from something Stavro had seen stenciled on the side of a box of produce from California.

To him, the name evoked “Class and top quality for the working consumer”.

The rise of Knob Hill Farms

Stavro was a true man of the people who believed in low prices and high quality for the working class.

As part of this underserved community, Stavro shared many of the same traits as Toronto’s Ed Mirvish (indeed, Stavro was often described as the Honest Ed of local grocers). 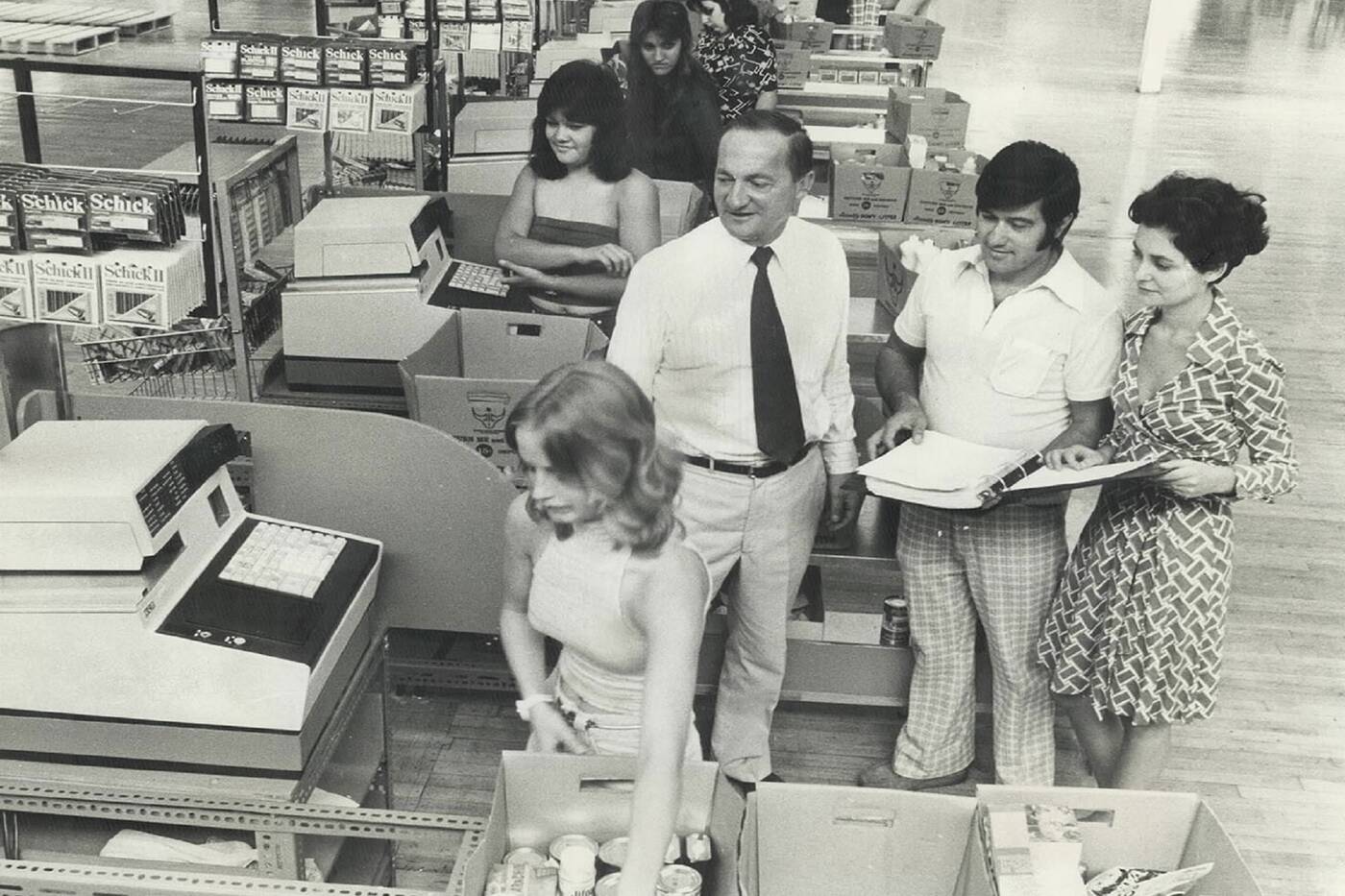 Check it out! Steve Stavro believed in cutting out middlemen and giving the savings back to the customer. Photo via the Toronto Public Library.

The nascent Knob Hill empire began as an outdoor market located at 1598 Queen Street East (near Coxwell), across the street from the meat market run by his father.

From the outset, Stavro favoured substance over style, packing his markets with affordable, quality local fruits and vegetables.

By the early 1960s, Stavro had scaled up his concept of a no-frills local produce retailer and in 1963 opened his first superstore with the vaguely Orwellian sounding “Food Terminal” in Markham (located at Woodbine Avenue and Highway 7). 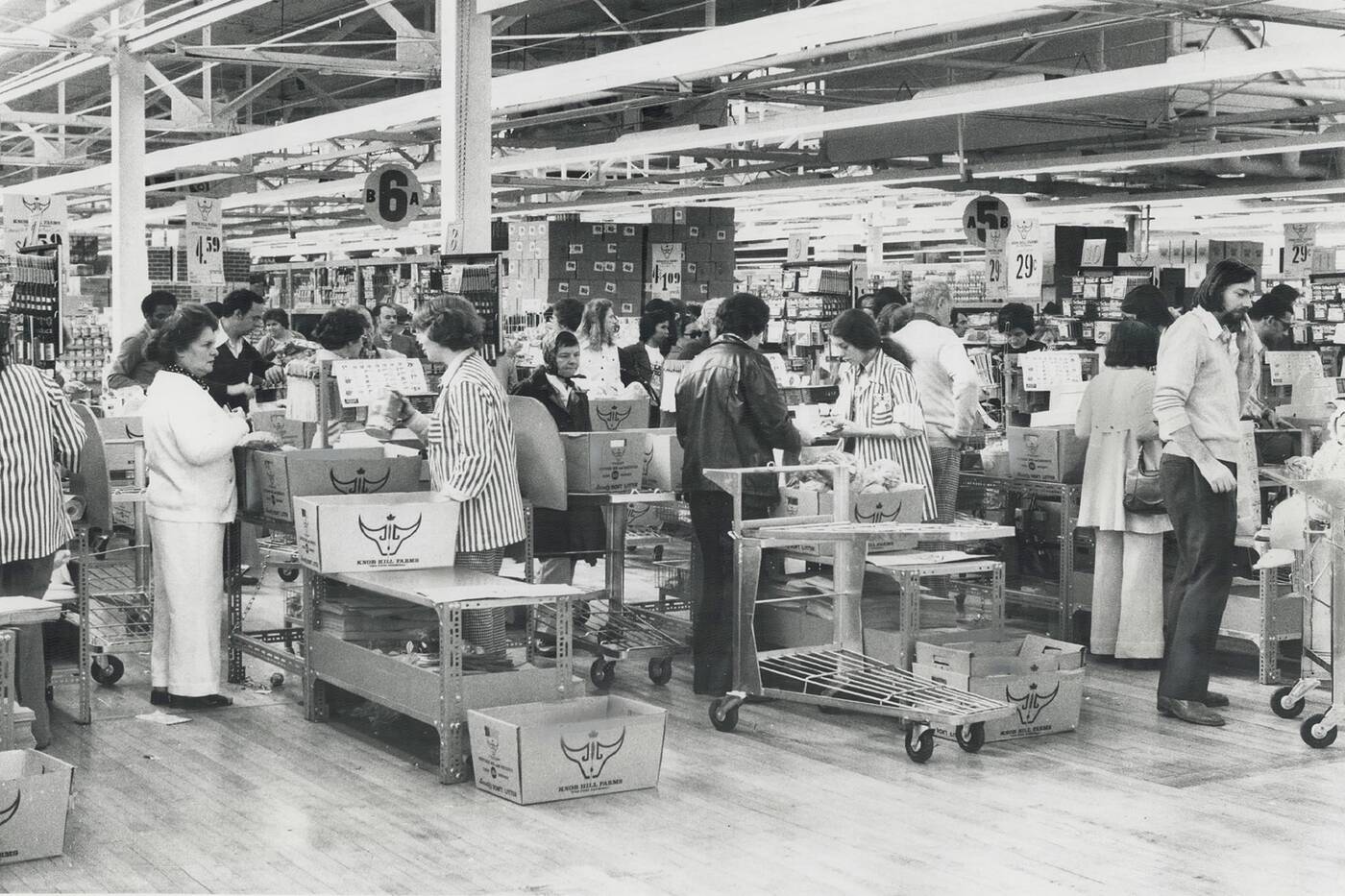 Terminal dealings: Customers quickly adapted to the mammoth Knob Hill superstores and the concept of big box. Photo via the Toronto Public Library.

The Food Terminal was nearly twice the size of a normal supermarket, and at times even incorporated outdoor tents to sell the overflow from the produce department.

The 1970s saw Knob Hill Farms expand with new Food Terminals popping up all over: one in Pickering, two in Toronto - Landsdowne and Dundas West, and Cherry Street – and a location in Mississauga (which was the largest food store in North America for a while).

The Cherry Street location was a bold move. At the time, there was literally nothing there, and it was not seen as a convenient location for the vehicle-deprived downtown residents who made up most of his demographic (the store was later home to popular Asian supermarket T&T). 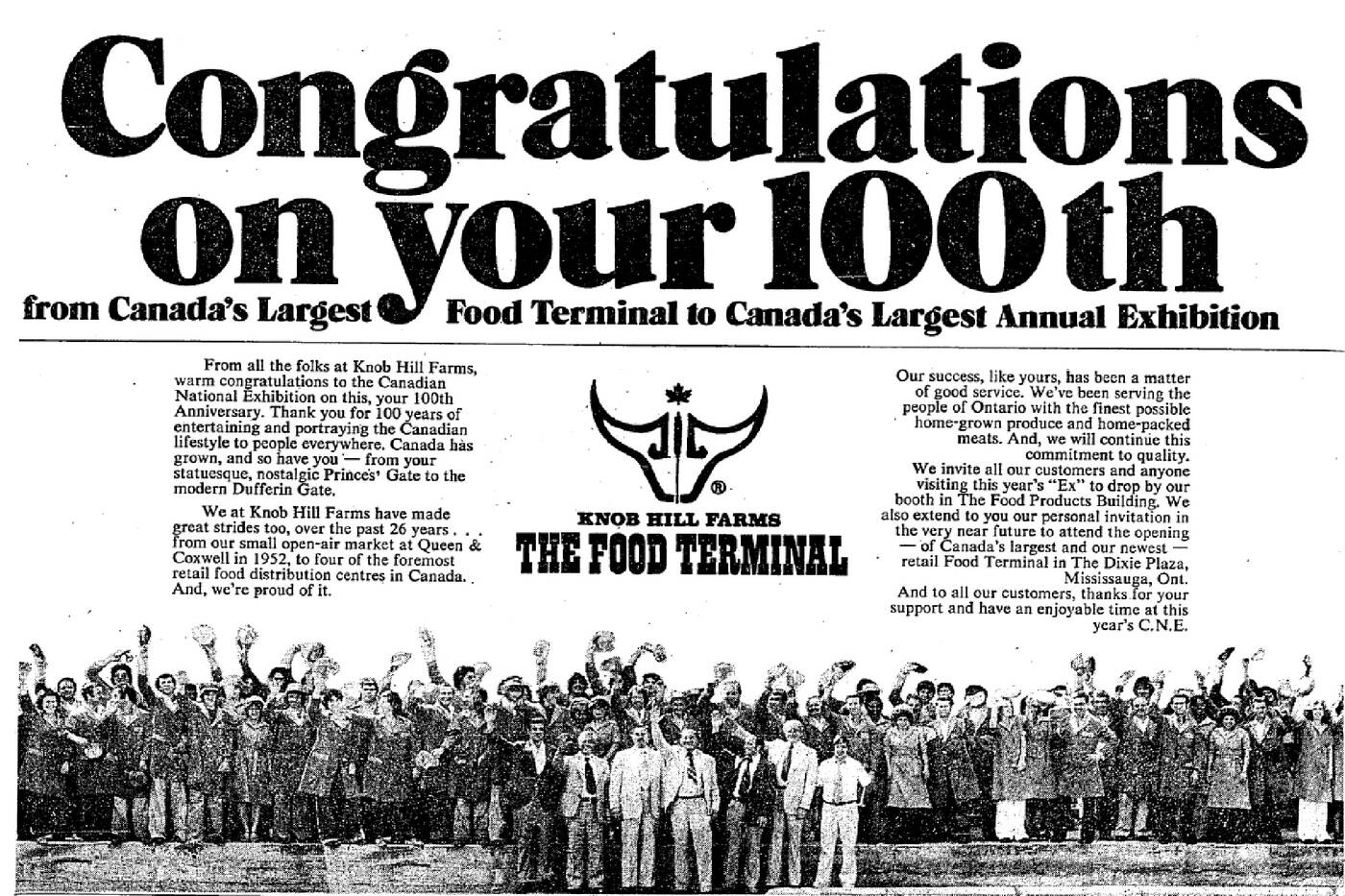 Ex-cellent corn at the CNE courtesy of Knob Hill Farms. Photo via Retrontario.

Knob Hill was also a cornerstone of the Food Building every year at the CNE, the fresh buttered corn on the cob an annual favourite.

In 1985, a 12-acre site was opened at Weston Road and the 401. The location was a WWII airplane hangar and featured a massive waterfall and mural by John Richmond illustrating the history of food, from Prometheus to Marc Garneau.

For almost two decades the Weston Road location was the largest supermarket in the GTA.

These flourishes were unique for Stavro who always adhered to a non-flashy style. Knob Hill Farms’ ubiquitous television advertisements were cheaply produced and aired on local stations Citytv and CFMT (in multiple languages) during off-peak hours.

Knob Hill even dabbled briefly in the world of television production, co-producing Citytv’s ode to Toronto on the occasion of its 150th birthday, “Toronto Trilogy,” which featured a scene set in the Lansdowne location.

Stavro’s success (much like Honest Ed's) was in removing the middleman. Knob Hill bought direct from the producer, who shipped direct to Stavro's market floors. There was no need for fancy displays or shelving.

Consumers looking for a deal had no problem rooting through shipping baskets to buy in bulk. Locations were overwhelmingly mammoth, long before Costco or Wal-Mart popularized the concept. 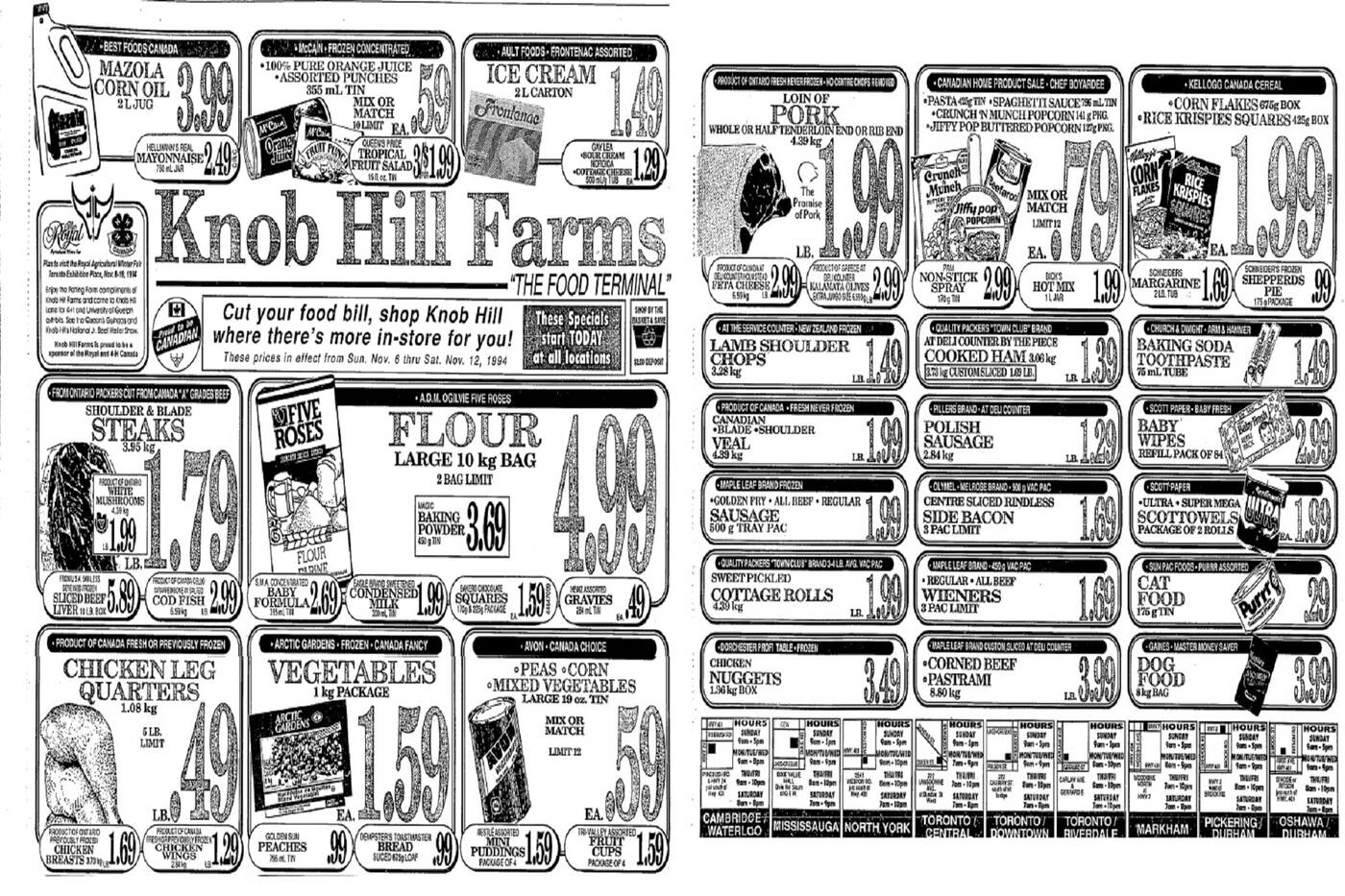 Art of the deal: A Knob Hill Farms flyer from 1994. Photo via Retrontario.

Knob Hill gets big-boxed in

In 1983, Knob Hill opened a new location in Oshawa at the site of an old iron foundry; it included a video store, bakery, wine store and dentist office.

At the grand opening, Stavro told journalists “that computer stuff is not for us, we don’t need a computer log to tell us when to order. All we have to do is look at the shelves to determine how much new stock we need.”

And that seemed to work for a while. 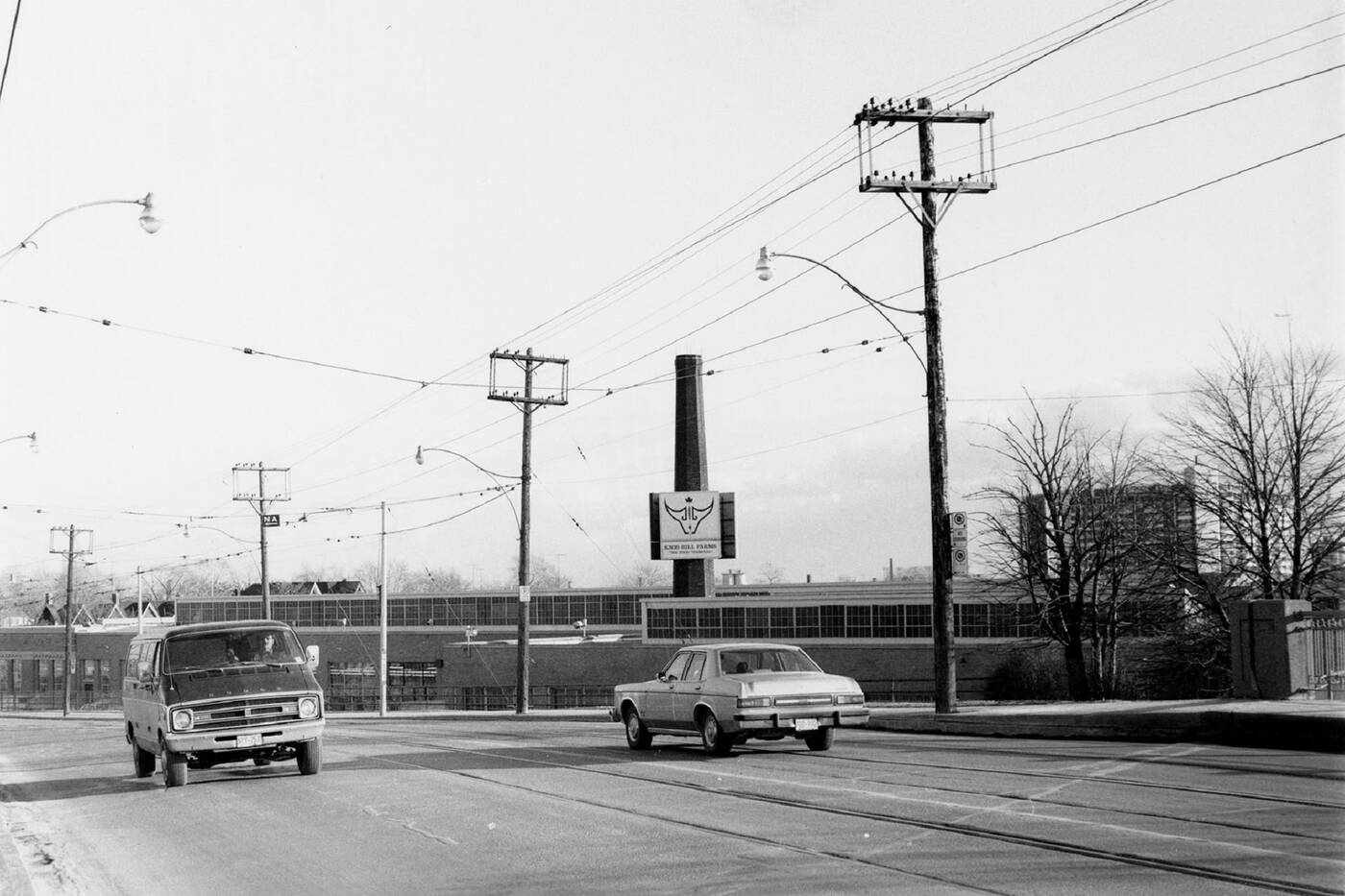 Knob does it better: The popular Landsdowne site in 1980. Photo via the Toronto Public Library.

On August 25, 2000, a shock announcement was made that all Knob Hill Farms would be closing immediately.

The company had ultimately been beaten at their own game, losing market share to encroaching Loblaws Superstores and Costco. Failing to digitally adapt was one of the chain’s major oversights.

The final location to close was the Weston branch in early 2001. 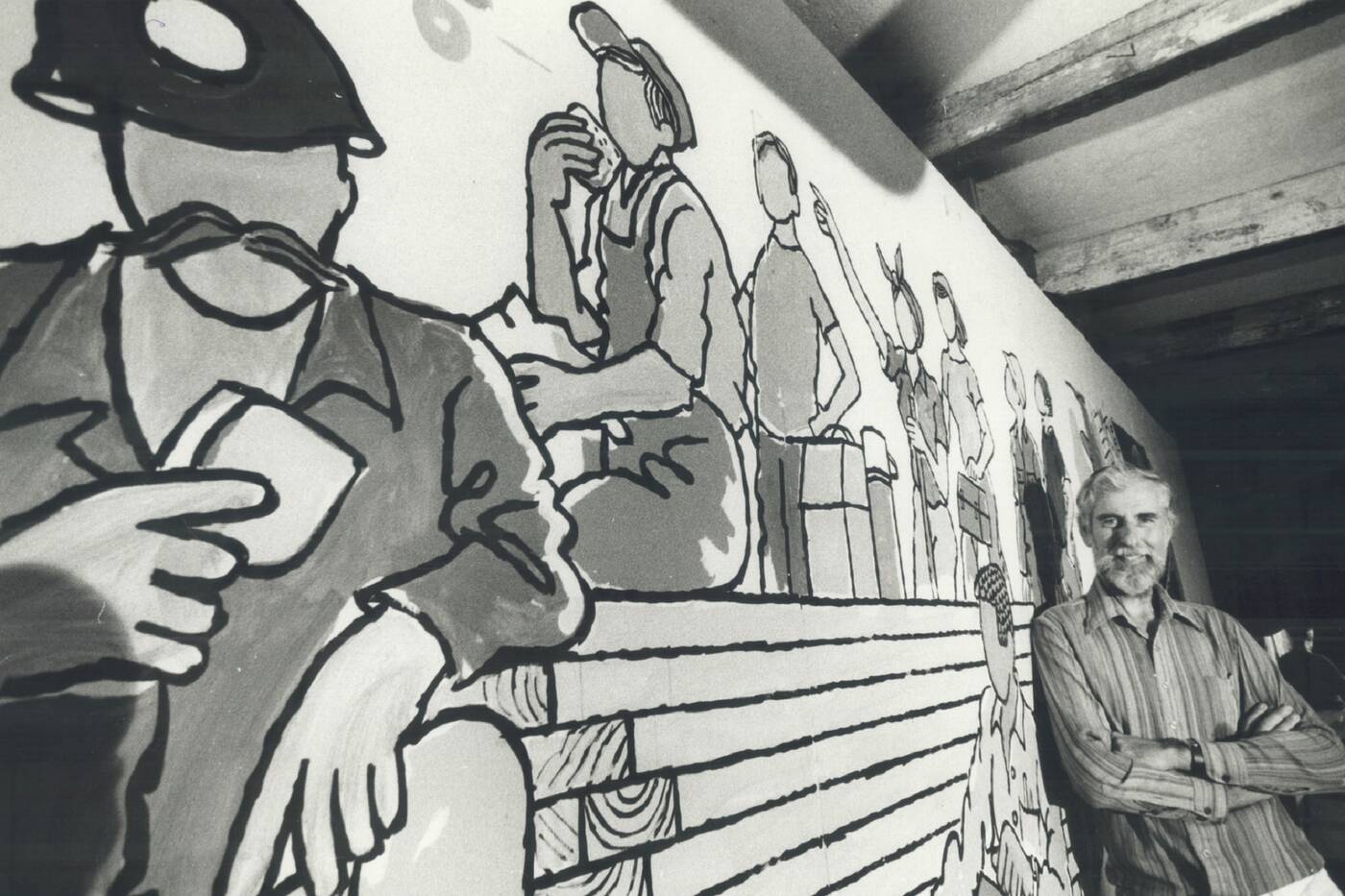 Edible histories: John Richmond's mural at the Weston site showed the history of food from Prometheus to Marc Garneau. Photo via the Toronto Public Library.

For a generation of Toronto people, the name Knob Hill Farms stirs an avalanche of memories. Visiting their “Terminals” was a weekend adventure, the stuff of legend.

And of course, a brief look at Kijiji shows that the classic food carts that have long outlived their original intent have become the most desirable laundry baskets in the city. 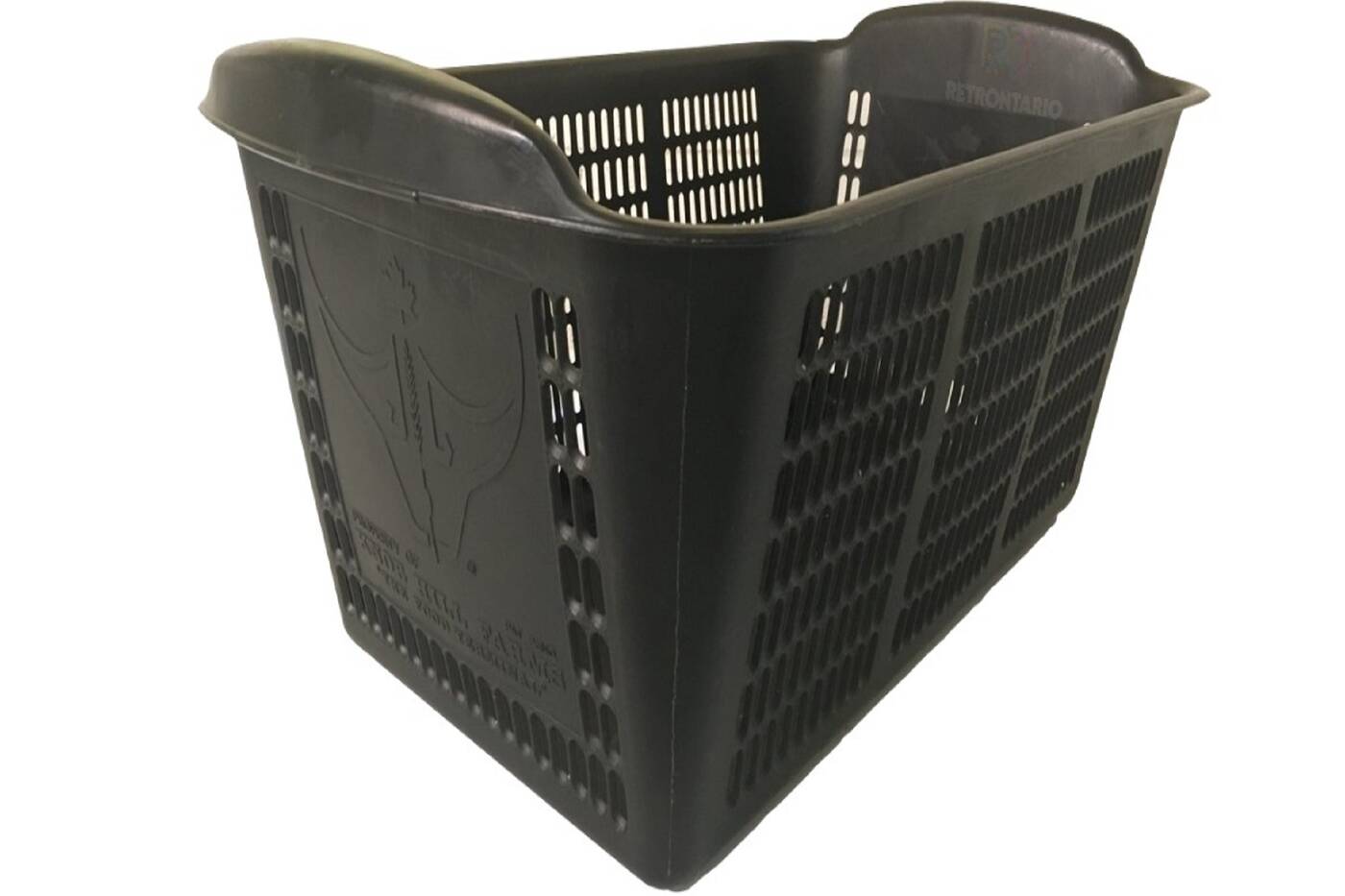