That time when Honest Eds made honest ads

Target's segue into Canada cheerfully soundtracked by a slightly blasphemous rinse of Mr. Roger's signature tune pays deference to the belief that TV advertising shapes consumers appreciation of retailers more than anything else. No one understood and harnessed that better than Honest Edwin "Ed" Mirvish, whose bargain basement TV spots perfectly complemented his bargain basement warehouse, located at the corner of Bathhurst and Bloor streets. "This way all you bargain hunters!"

Opened in 1948, Honest Eds can lay claim to being the very first discount superstore ("no credit, no service, no frills: the world's biggest discount department store!"). The sardine crammed store cheaply peddled items bought in bulk at fire sales atop his infamous orange crates, bringing in millions of dollars in revenue. Mirvish also claimed to have invented the concept of the loss leader, items sold below wholesale cost designed to lure patrons into the store's labyrinthine layout where they would surely splash out on much more. "There's no place like this place, anyplace!" 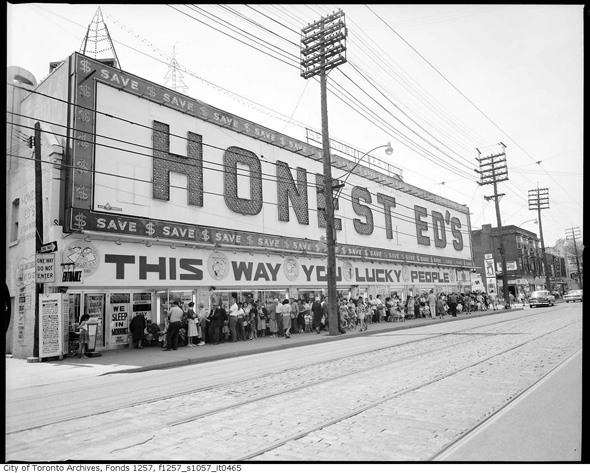 With its Vegas style marquee illuminated by 23,000 blinking light bulbs, the shop itself was one gigantic advertisement painted in broad kitsch strokes, and even felt retro by the time 1960 rolled around. As the decades flew by, Honest Eds remained the same, for better or worse. It was a bona fide Toronto destination, fittingly referenced in travel guides and pop culture outlets alike as a visual short hand for Hogtown West.

"London has Harrods, New York has Macys, Toronto has Honest Ed's" proclaims one of the many unique hand painted signs that make the store so memorable, along with the rows of black and white head shots and theatre posters from Mirvish's friends and associates in live entertainment. "Honest Ed's a nut, but look at the cashew save!" 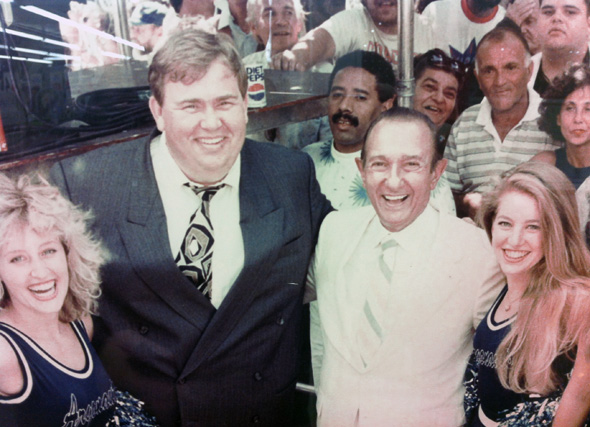 Perhaps the greatest bit of cogent sales skill Mirvish deployed was his pun heavy, groan worthy, comedic self-depreciation. There was no point in trying to gussy up the low grade reality of discount shopping, so why not celebrate it? In the hundreds of TV commercials Honest Eds produced in the 1980s, Mirvish would often appear at the beginning, or end, to drop puns and make light of his no-budget approach to advertising. "Honest Ed is a nightmare, but my bargains are a dream!"

Much like their print advertising, Honest Eds TV commercials were produced in the same house style, always abiding by the if it ain't broke don't fix it rule. Commercials aired locally on CityTV and CFMT Channel 47 Cable 4, because airtime real estate was cheap, and would hit the right eyeballs - Toronto's ethnic community, low wage earners and students. Using stock footage, rag tag costumes and store customers as extras (check out the dudes modeling $10 car coats in the 1984 commercial - they are sure glad for the work), Honest Eds commercials were a triumph of good will over good budgets.

Ed Mirvish passed away in 2007, and although at the time speculation on the future of the store was grim, so far Honest Eds has kept on keeping on. The store gained more cult cred after appearing in both the comic book and flaccid film adaptation of Scott Pilgrim, and as the setting for Jenny Mayhem's awesome "Wide Open" music video. Young people may still marvel at how old fashioned it all is, but they might just be surprised that their parents did as well. And let's be honest, one day in the future that schmaltzy Target commercial will look just as quaint and dated as the 1980s Honest Eds TV commercials do in 2013. 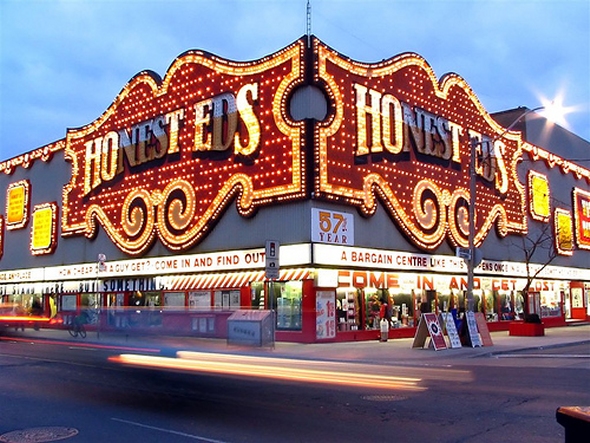